It was a weekend of firsts for our family and Roxanne: first visit to Jellystone. First weekend camping trip close to home. And first excursion where someone else in the group had an RV.

The players and the setup

We joined a couple of close friends and their XY-aged son at Jellystone, plus his grandparents. They're a semi-retired couple who travel the country in their 39' Brookstone by Coachmen fifth wheel.* It has multiple slides and is nearly as long as two Roxannes back to back. There's more than enough room to sleep four adults and a child inside, and the living/dining area served as a home base when we were looking to escape the heat and spend some time indoors. It has a fireplace, a big screen TV and an oven. I've seen apartments that are smaller and not as well-appointed.

*For the uninitiated, a fifth wheel is a trailer RV with a special coupling that sits in the bed of a pickup truck. 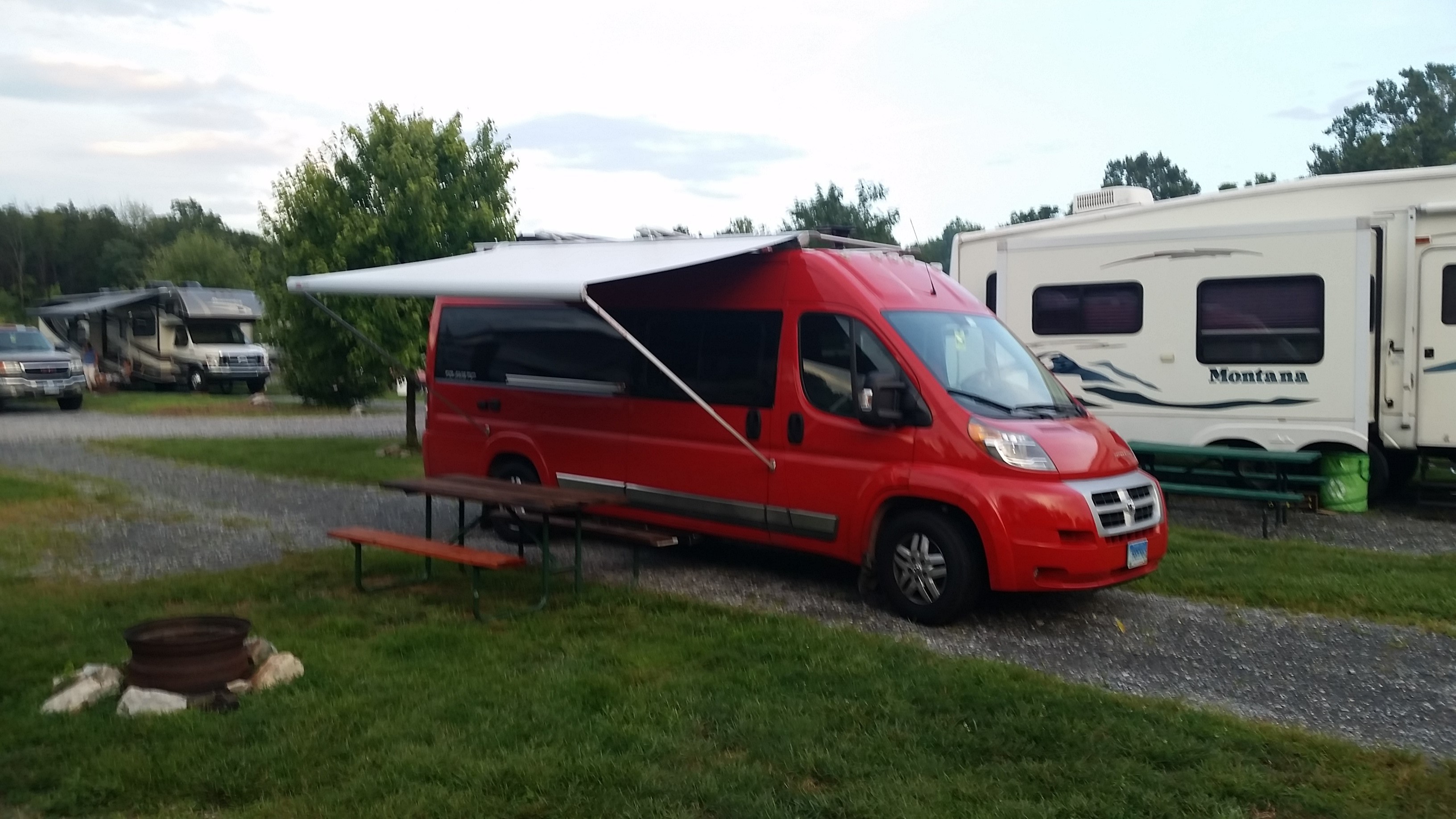 And we pulled up next door. We arrived a couple hours after everyone else. We just switched the fridge to electric, plugged in the cord, put out the awning and we were good to go! 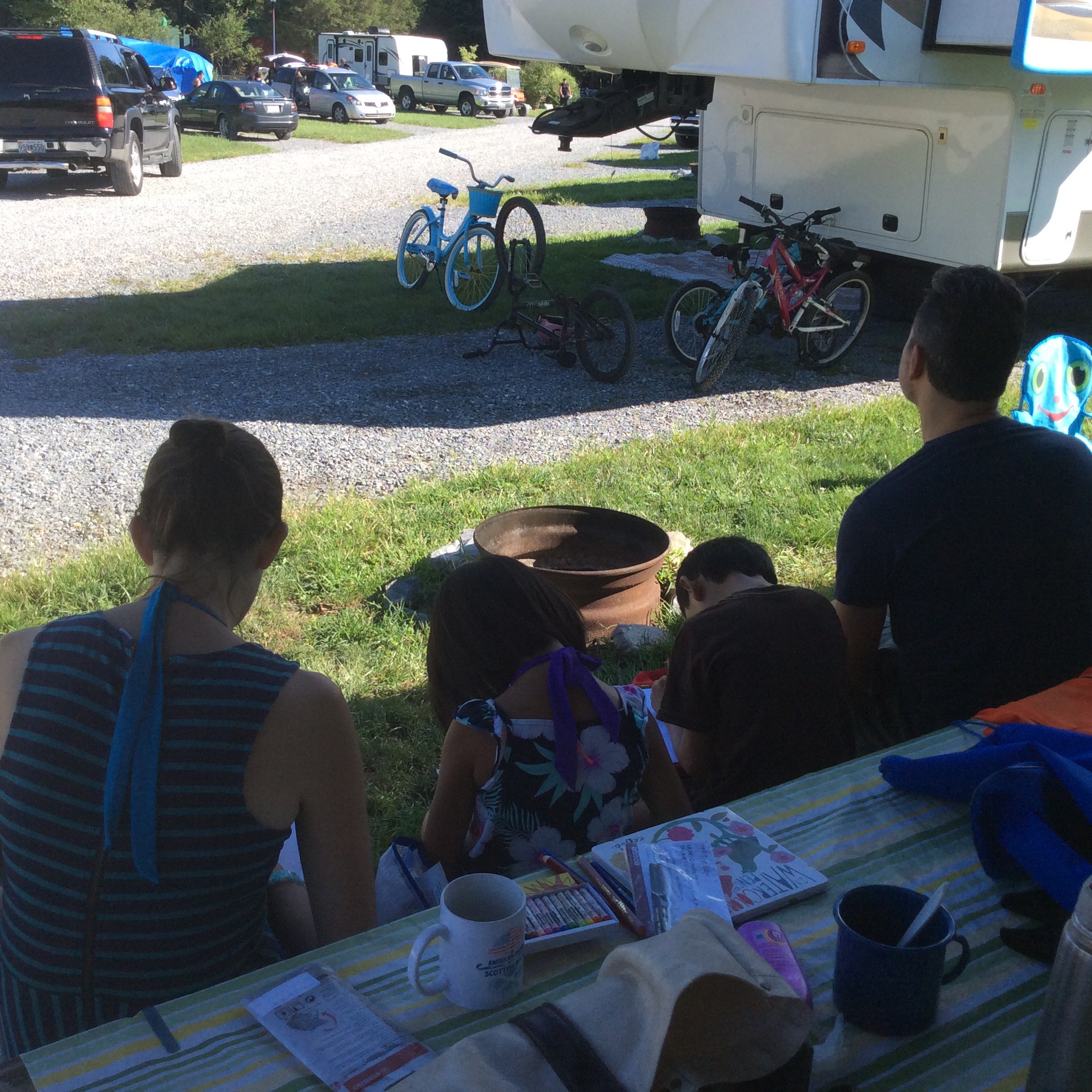 We had to commit a little campsite subterfuge to get our spot. The fifth-wheelers booked first. When we went to the website to book, we entered Roxanne's measurements and were given a site on the opposite side of the park. That wouldn't do for two families sharing meals. So we tried again in case it was some sort of error. Nope. Third try: we decided to say we were bringing a fifth-wheel that's 39 feet long. Lo and behold, we got the spot right next to our friends. I felt bad about this, because I figured I was blocking a large RV from the only type of site that would hold it. But when we arrived, we saw several other Class B vans and even a cluster of tents on one site right nearby. No big deal.

It just so happened that we picked a weekend with record-breaking heat in the DC area. We pulled into Jellystone Friday afternoon just after a quick thunderstorm broke through and cooled things off a bit, but that didn't last. Saturday was HOT. As in, standing around watching the kids at the playground at 8 a.m. for a few minutes was sweat-inducing. Our part of the campground didn't really have any shade either. Weather alerts from back home were blaring at us with EXTREME HEAT WARNING and admonishing us to check on our neighbors who don't have air conditioning. And we had chosen to spend the weekend outside.

You probably shouldn't spend the hottest weekend of the year outdoors in the sun. But if you're gonna, a water park with periodic access to air conditioning is just about perfect. We swam in a couple of pools, shot each other with water cannons and went multiple rounds down a big, twisty water slide. (Yes, the kids enjoyed themselves too.) Jellystone publishes a week-long list of activities in advance, hour by hour, so you're never without options if you want to go do something. There was a flashlight treasure hunt one night and a dance party with Yogi, Cindy and Boo Boo the next. Side note: we felt bad for the actors stuffed into furry costumes on such a hot day. And XY and her friend are terrified of mascots. But Lindy and I couldn't resist a picture with a bear. 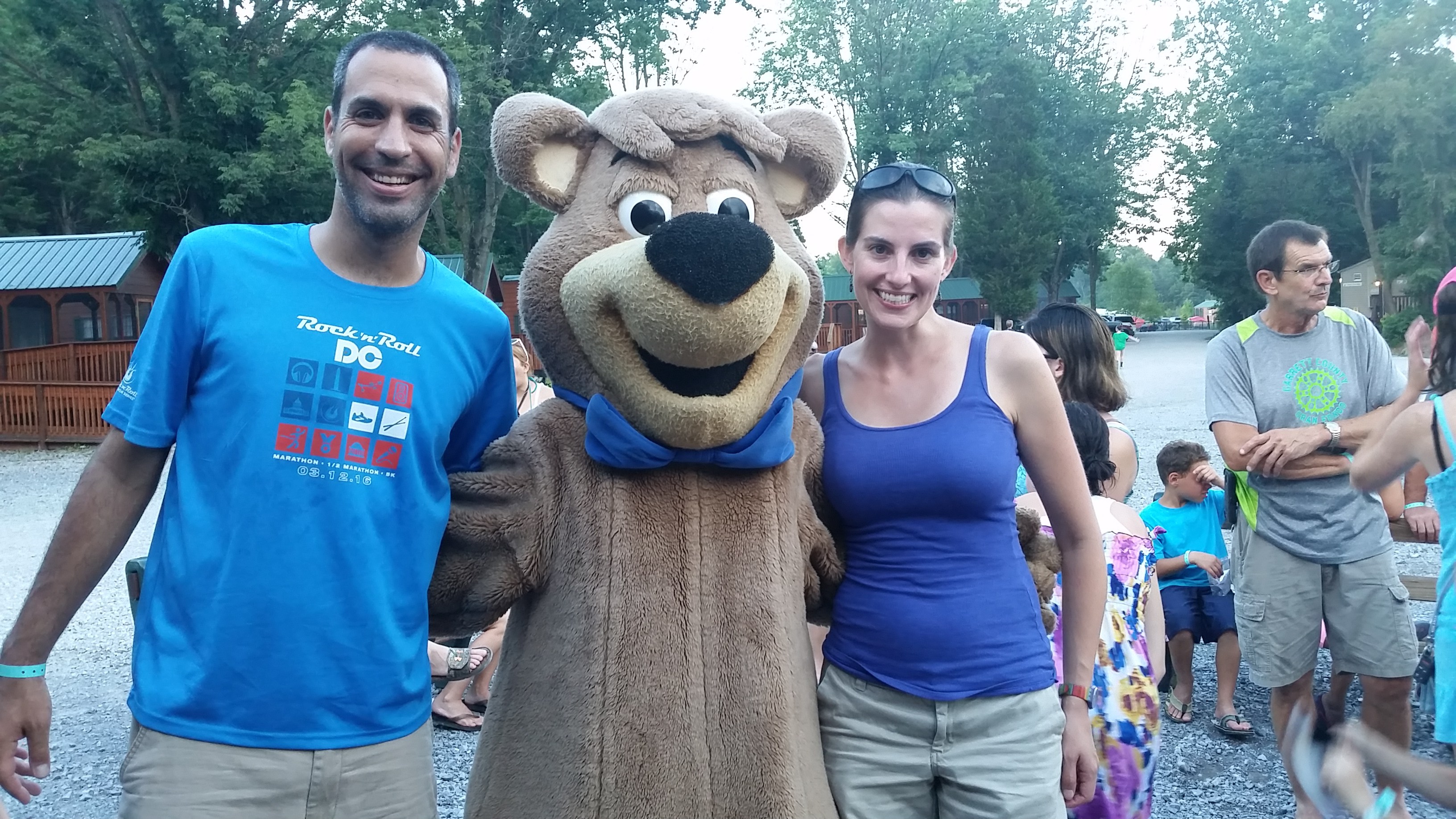 Jellystone is much more expensive than a night at other RV parks we've seen, because you're getting all of the activities and amenities included. You're also subject to the Hanna Barbera licensed characters everywhere you go, including the bathroom. We paid $110 a night for two nights, which covered a pull-through site with full hookups and access to almost everything the park offers. The zip line was an extra $20 for 5 tickets, and we didn't do laser tag or the arcade, but those are extra too. There's a camp store with the usual stuff plus a lot more candy and stuffed animals than you'll tend to find elsewhere. A concession stand is open all day (we didn't use it). A coin laundry, a propane station and multiple bathroom/shower buildings around the park round out the services. Parts of the park were a bit muddy after a recent rain, and I wish ours wasn't the only area that barely had any shade. But these are small things.

Last night, when I crawled into bed exhausted with a book, I was so glad we weren't in a tent. Our last tent camping trip was on a freakishly cold weekend. So it's fitting that our new RV was up to the task of a freakishly hot weekend. We were comfortably cool each night, and I even woke up to find XY complaining of being cold and Lindy wrapped up in a blanket. In the five months since our first RV journey, we've already done cold and hot and everything in between.

I ran ten miles in the early morning, a few under already hot sun. But three miles outside of the park, down a country road, under Interstate 81 and through the small town of Williamsport is the glorious C&O Canal National Historic Park. I got a few miles in on the shaded, nearly empty towpath before heading back to camp. You know what's amazing after a long run, a stretch and a shower? Yep, a dunk in the pool.

So we took one last trip to the pool and down the Jellystone water slide before heading out in the early afternoon. We dried our bathing suits and towels in the sun while Lindy made lunch and I got Roxanne ready for the road. I don't love waiting in line for central dump stations as we typically do at state parks. Having the services right at your campsite is nice, but I also find dump stations tend to be configured better. Our sewer connection was parallel to the discharge port on the RV, which meant less ability to rely on gravity while dumping. I just had to fiddle with the hose a little bit more than usual.

We got moving and were home in barely an hour. What a weekend. We bought the RV so we could explore the country, spend time outdoors and do family things while XY is still young. It's great to be able to do that so close to home after spending several weeks this summer driving around the country.