A little over a year ago, we were in the midst of planning a massive undertaking: Visit 40 of the 59 National Parks in celebration of the 100-year anniversary of the National Park Service. When planning out our route, the hardest part was deciding which parks to visit and which to skip. Some were simply not an option, like the ones in Hawaii, American Samoa and the Virgin Islands. And of course, we had to return to some old favorites: Yosemite, Grand Tetons, Dry Tortugas and Zion. As for the rest, a lot of the fun was in researching and discovering the incredible diversity of wild places that make up our National Park System. 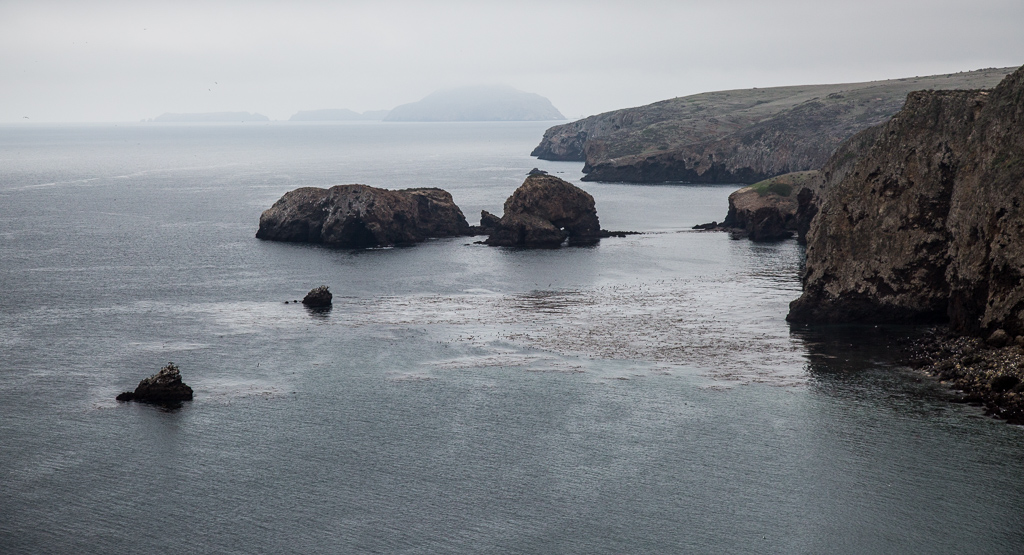 The craggy cliffs of Santa Cruz Island with Anacapa Island appearing through the fog in the background.

Now, 40,000 miles and 40 parks later, we found ourselves at the end of an incredible journey, wondering what would lie over the horizon for Famagogo. For over a year, everything had been beautifully choreographed, one adventure flowing into the next as we checked park after park off of our list. But the funny thing about great adventures is, once you get started, it's really hard to stop. And really, 40 parks was just an arbitrary number that we thought we could pull off in a year - there are still 19 of the best wild places on earth that we have yet to discover. So, in lieu of throwing in the towel and patting ourselves on the back for a job well done, we packed up the Winnebago and headed west to National Park #41 - Channel Islands. 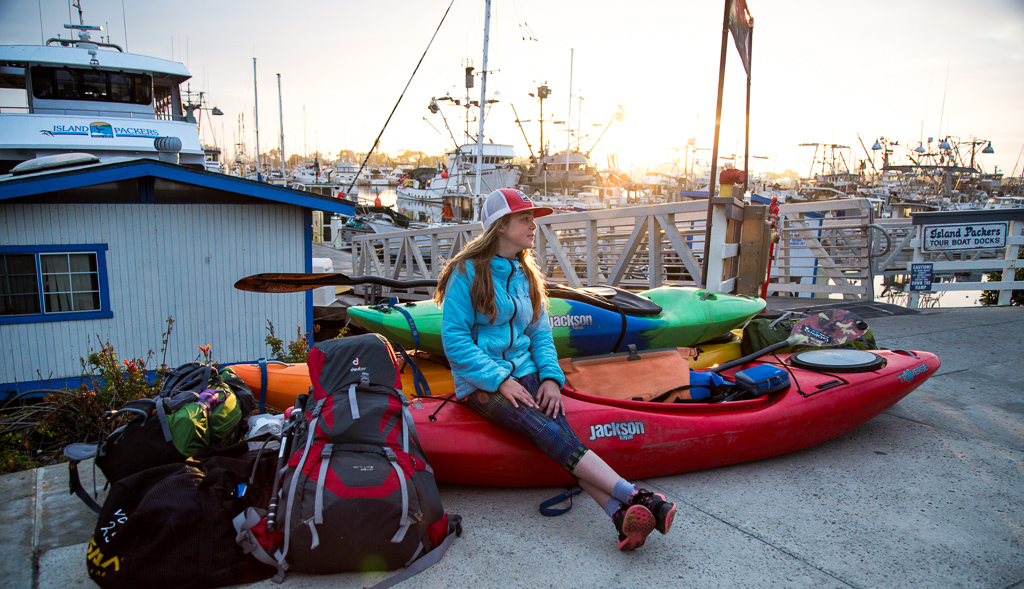 Abby sits amongst all the gear as we wait to board the ferry in Ventura Harbor.

The Channel Islands are composed of a chain of eight islands (five of which make up the national park) off the coast of California, stretching from Santa Barbara to Los Angeles. After a little research, we set our sights on a three-day backcountry adventure on Santa Cruz Island, just off the coast of Ventura with ferry service via www.IslandPackers.com.

We woke before dawn, for an early morning departure on the ferry, and loaded our backpacks, kayaks and dive gear aboard the Island Adventure and then hustled up to the top deck for a bird's-eye view during our hour and a half voyage to the park. We pulled away from the docks of Ventura Harbor and within minutes, we spotted three sea lions draped across a bobbing buoy. Our captain took us in for a closer look, and as we approached, the largest of the trio let out a booming, guttural bellow letting us know that we were encroaching on his territory. Just past the entrance to the harbor, a pod of dolphins appeared in our bow wake and served as escorts from the harbor.

The journey to the island passed in a blur as we spotted whales and dolphins, one after the next punctuating the smooth surface of the expansive horizon. As we made our final approach, a mega-pod (1000+ individuals) of dolphins welcomed us to the island with an impressive display of aerial acrobatics that enveloped our vessel on all sides and kept us racing from port to starboard and back, taking in the incredible grand finale of our voyage. As the captain shut down the engines, the dolphins took their cue and return to the deeper waters surrounding the island and we set out to explore Santa Cruz. 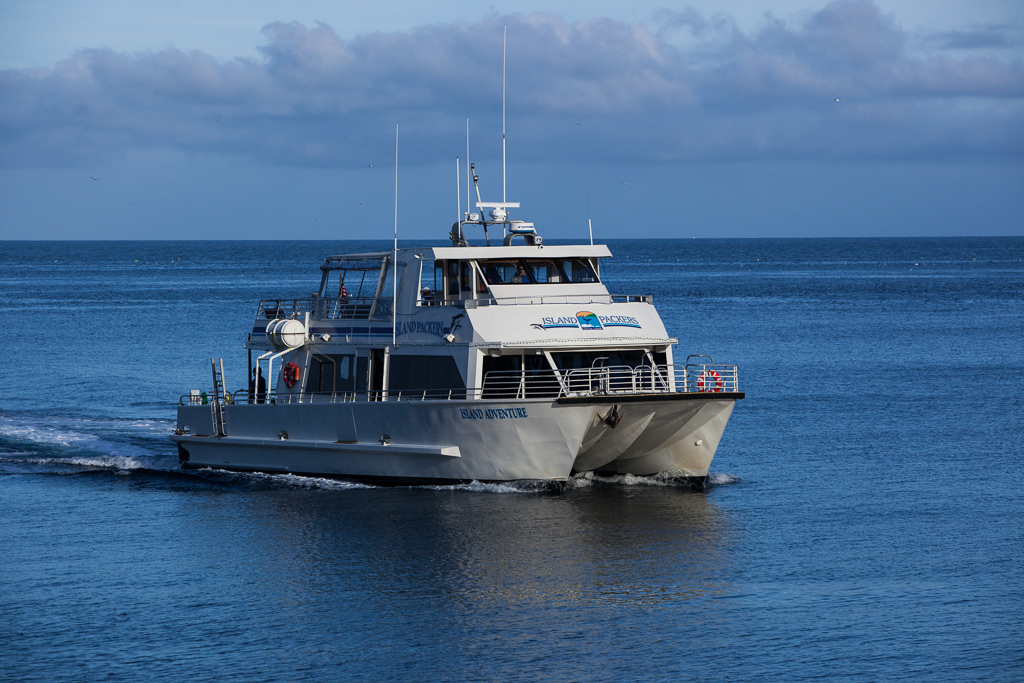 The ferry boat Island Adventure making its final approach to the harbor on Santa Cruz Island. 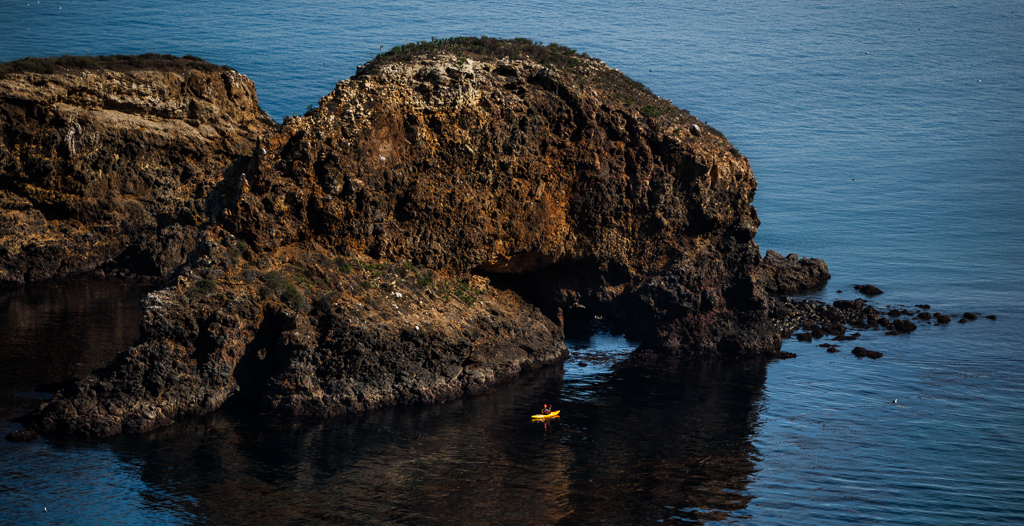 Peter explores one of a multitude of sea caves via kayak along the shoreline of Santa Cruz.

From the instant we arrived, we were taken with the rugged scenery of the island. Flanking the harbor, crumbling cliffs stretch up to the heavens. Nestled in between the precipices, a deep valley lies with a well-maintained group of cabins surrounded by lush gardens that hail from days long ago when the island was occupied by a working sheep ranch. As we pressed on, the path meandered through a eucalyptus grove where we spotted a few scattered picnic tables and fire rings that indicated we had arrived at our campsite. Surprisingly, there were no other campers in sight giving the impression that we had the entire island to ourselves. We made quick work of setting up our tents and then donned our snorkel gear and headed back down to the water to explore the kelp forests that flank the harbor.

Even clad in thick neoprene, the frigid water took my breath away as I made the transition from land to sea. Pushing away from the shore, I was no longer concerned with the temperature, as I was consumed with wonder entering the surreal kingdom of the kelp forest. I swam with my arms outstretched in front of me, to protect my exposed face from the serrated tendrils of kelp that constantly tugged at my mask and scratched at my cheeks. As I pushed away from the dense foliage, I discover open caverns scattered throughout the forest that were teeming with exotic creatures: colorful fish, a leopard shark, an octopus, and countless abalone. I dove deep and peer into a crevice below a boulder and spot two lobsters that are each almost as long as my arm. After more than an hour of exploration, the cold water again had my attention and I returned to the beach to thaw. 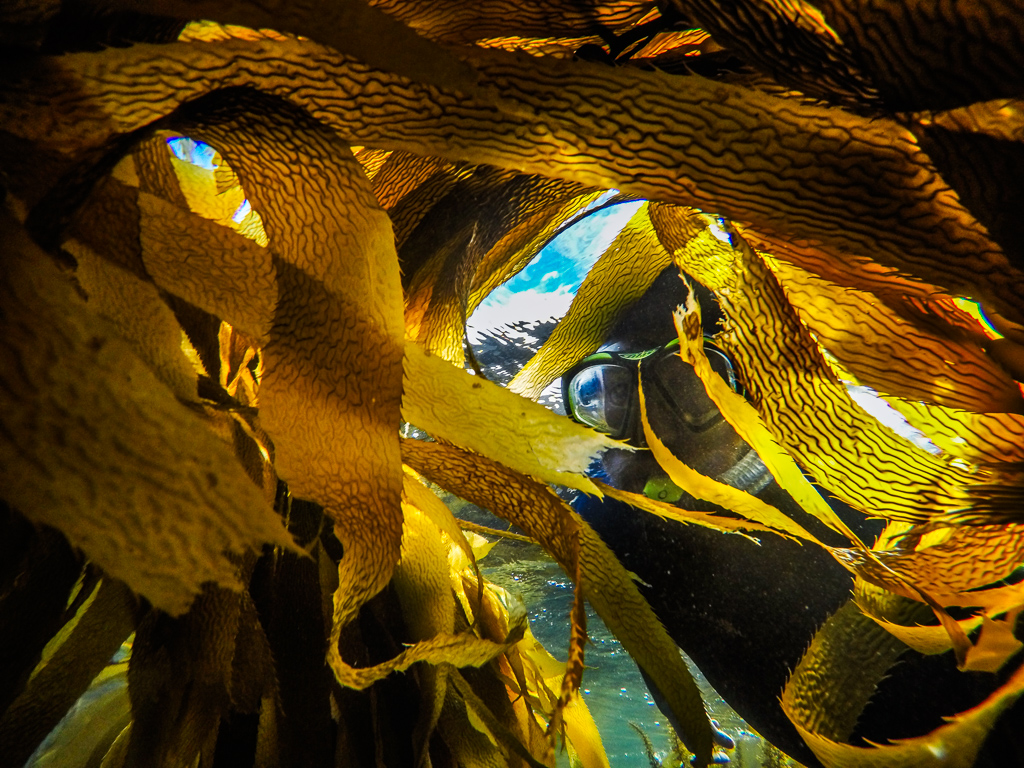 Peter making his way through the thick foliage of the kelp forest that flanks the harbor. 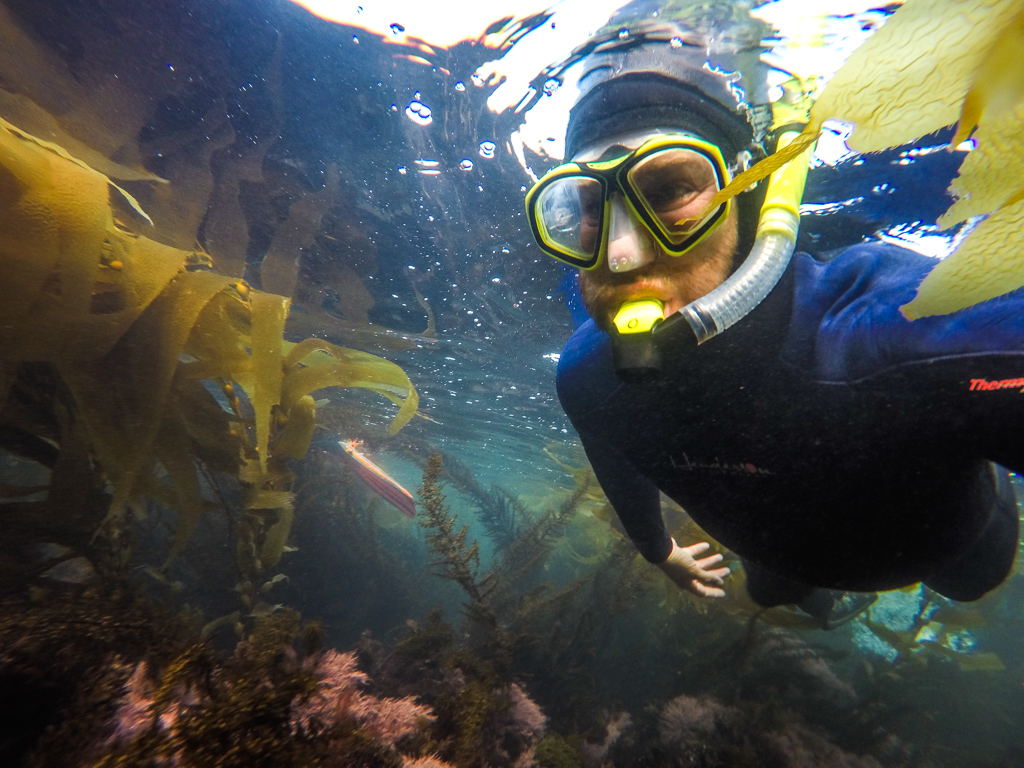 Occasionally the kelp would part to reveal a multitude of colorful sea life.

Back at camp, we threw together a quick lunch and then headed out for an afternoon paddle along the craggy cliffs. The sea was calm and the wind light, so we made our way into the open water that surrounds the island to see what we could see. The cliffs were punctuated periodically by sea caves. We paddled into one of the larger caves and discover a labyrinth of tunnels that appeared as the waves receded. We spent the afternoon refining our timing to ride the waves through the maze of tunnels. It feels much like riding a waterslide leading from one rumbly cavern to the next. As we made our way around the south side of the island where we discovered a perfect surf wave that occupied our attention until the late afternoon tidal shift. 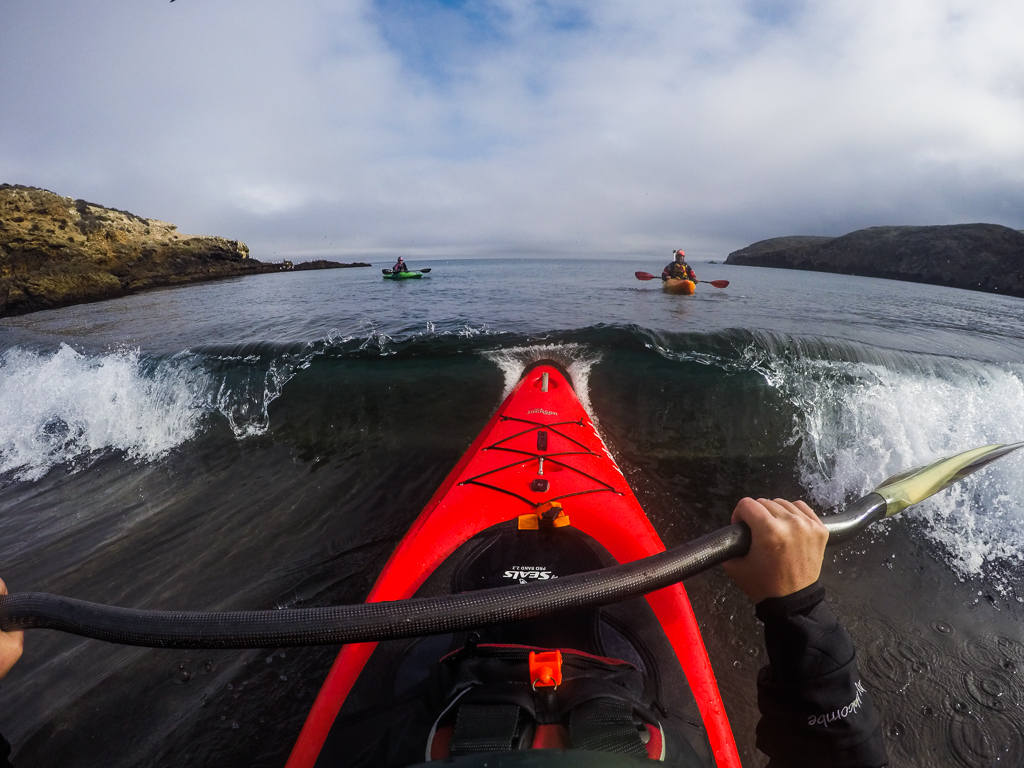 Kathy punching through the small break after a blissful surf. 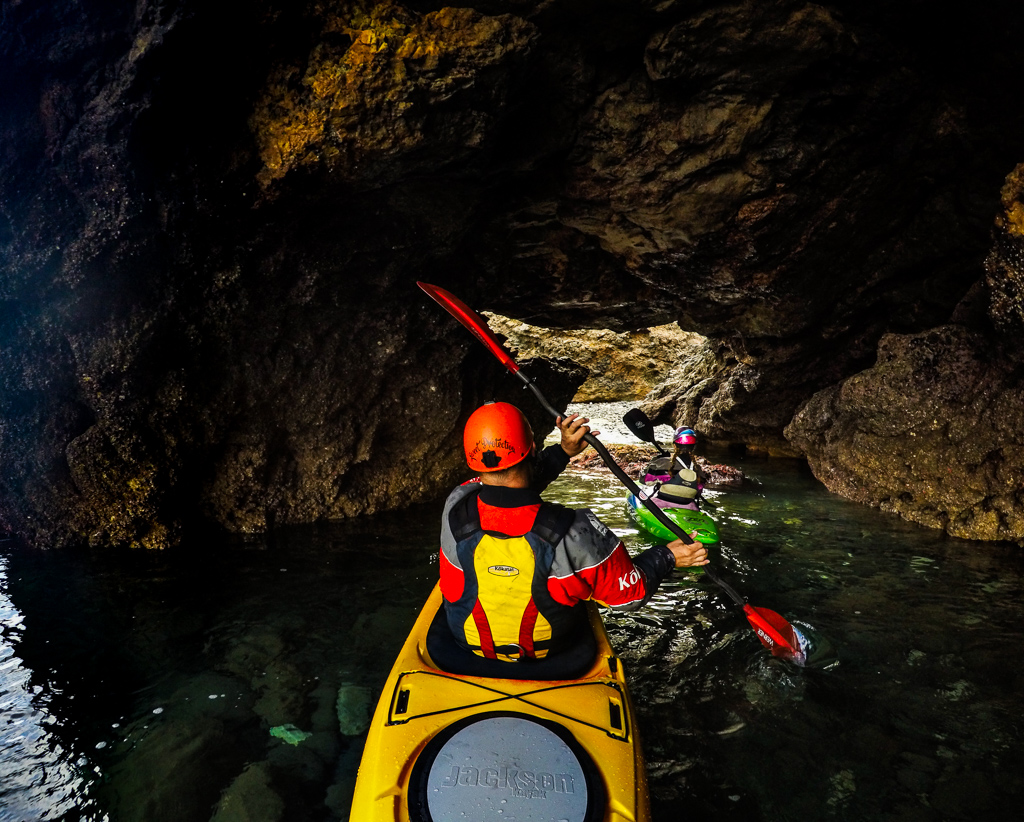 Abby leading Peter through one of the tunnels that connect the multitude of sea caves on the island.

Kathy thinking kelp is cool and Abby thinking it's gross. Fortunately, it wasn't long before Abby discovered just how cool the kelp really is.

Tired and hungry, we returned to camp just as the sun dipped below the horizon. The first order of business was dinner. As we prepared our dehydrated meals, we discovered. . . the eyes! Abby spotted them first reflecting in her headlamp, and once we noticed they are there, it doesn't take long to realize that we were completely surrounded by almost a dozen creatures hiding in the darkness around us. We watched in horror as the first pair of peepers began to descend the hill just beyond the perimeter of light cast by our lantern, followed in short order by the rest of the concealed demons. We held our breath as the most-certainly menacing, and likely human-consuming beasts crossed the threshold of light around us and discovered a miniature fox that is endemic to the island and about the size of a house cat. Abby squealed with delight and declared the island fox the cutest thing EVER! That is until the rest of the pack arrived and it become an all-out war to see who would actually get to eat the dinner we were preparing. The instant one of us stepped a few feet away from our post, a mini-fox was there, ready to abscond with any morsel it could get its adorable muzzle on. Famagogo eventually prevailed in the Battle of Dinner with full bellies. Weary from a great day on the water, we retreated to our tents and quickly drifted off to sleep. 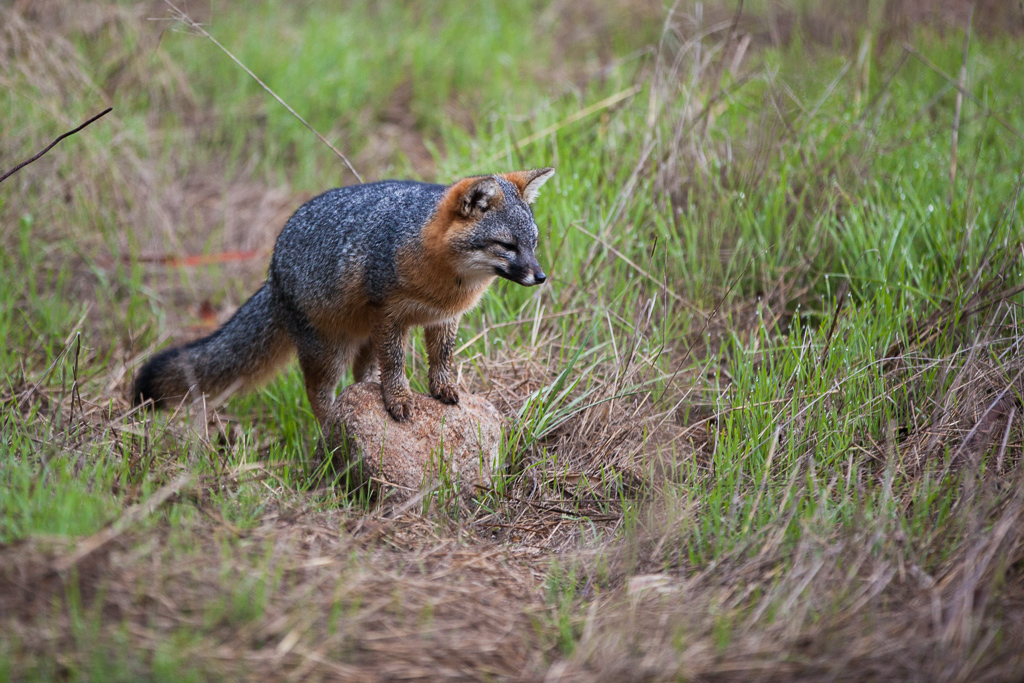 One of the notorious island foxes that waged war on Famagogo at dinnertime. 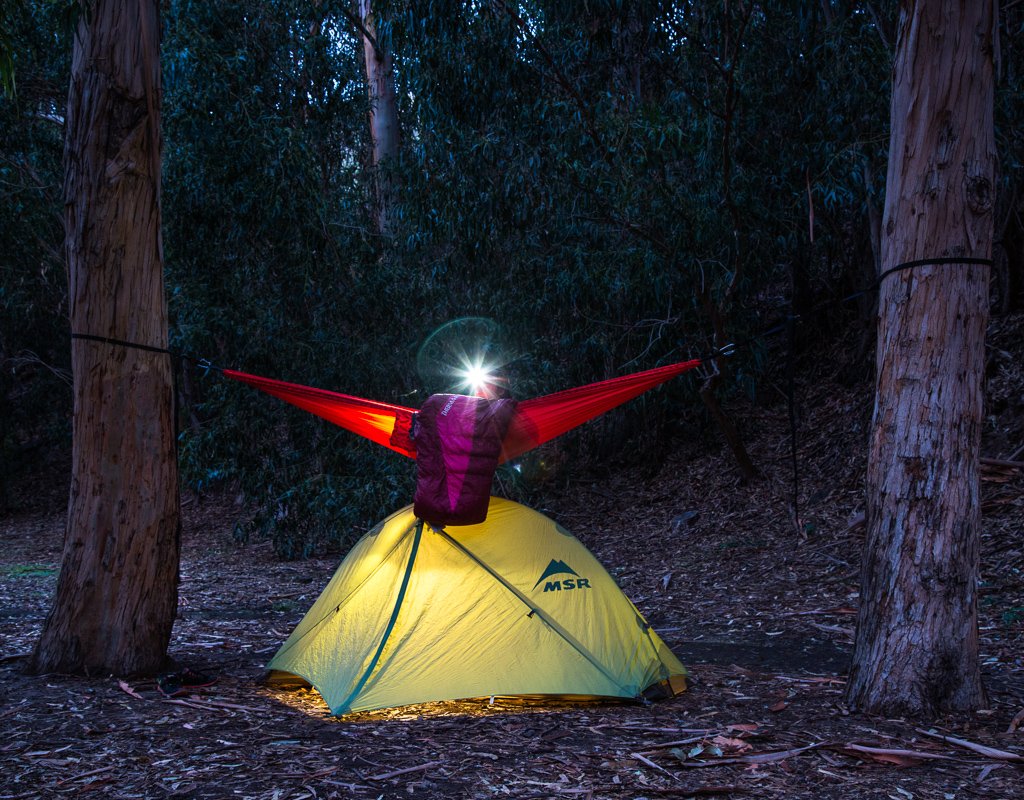 Abby deemed it safer to hang in the hammock above her tent after an epic battle with the island fox.

We spent the next morning kayaking and snorkeling, and after lunch decided that it was time for a hike. We followed a nearby trail that led us up, up, up to the top of the sea cliffs. Even from our high vantage point, we could still see the giant Garibaldi Goldfish that we had snorkeled with in the kelp forest earlier. The miles passed quickly and we were escorted by an island fox almost the entire way. Eventually, we came to a harbor and as we took in the view from up above, a cacophony of guttural barking caught our attention as the sea lions in the caves below us bantered back and forth across the bay with their resounding bellows. We listened for a while as they serenaded us and then headed back to camp spurred on by a quickly setting sun.

Kathy and Abby hiking along the perimeter of the island. 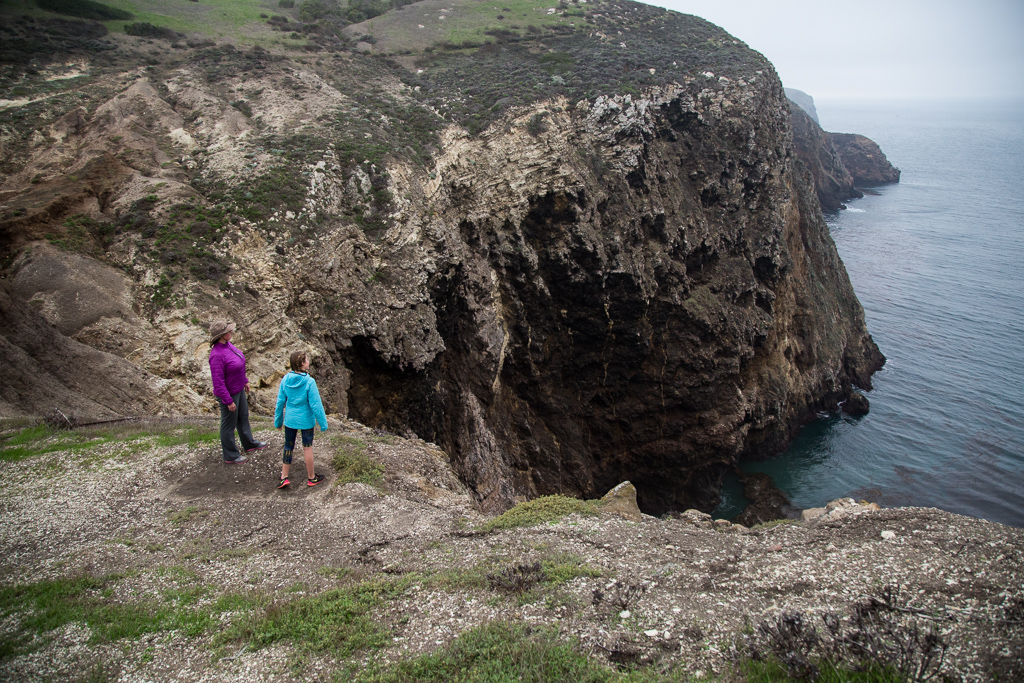 Kathy and Abby taking in the concerto of the boisterous sea lions in the sea caves below. 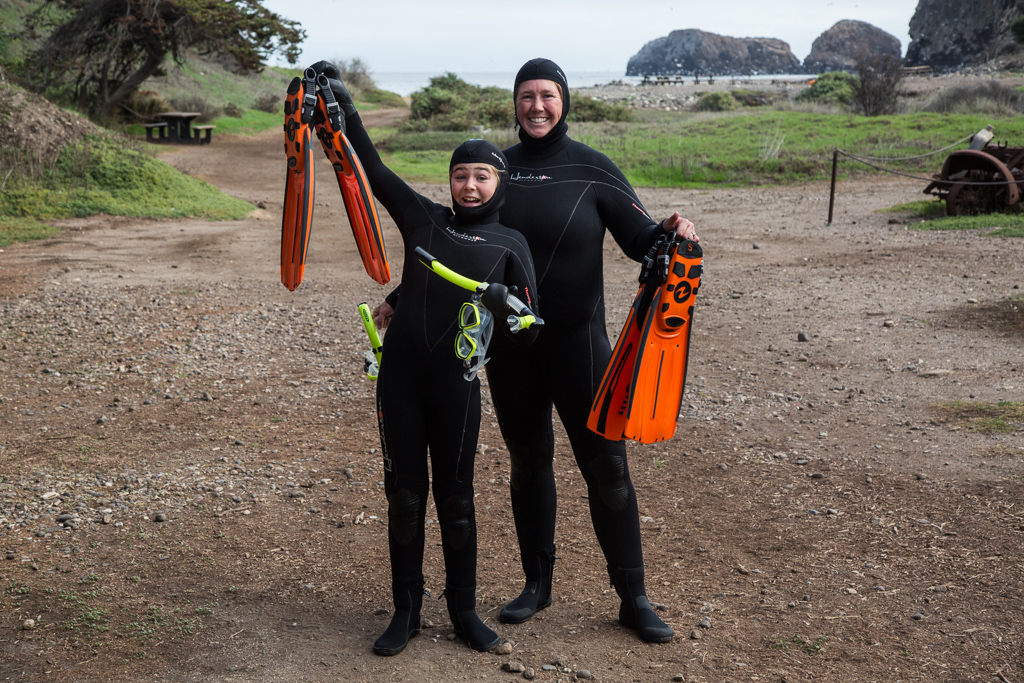 Kathy and Abby all geared up and ready to explore the kelp forest one last time before the ferry arrives. Even the 7mm neoprene could only ward off the cold for a couple of hours.

On our last day, we packed up camp and brought our gear to the dock so that it was ready when the ferry arrived. We squeezed in a couple of hours of snorkeling followed by an afternoon of kayaking. Right on schedule, the boat arrived and we headed back to Ventura Harbor for a celebratory Italian feast at Milano's. As we noshed on seafood pasta, Abby declared Channel Islands her absolute FAVORITE national park (as frequently happens after exploring a new park) and we happily bantered back and forth about where our next adventure would take us. With heavy eyelids, we stumbled back to Winnie the View and reveled in the comfort of crawling back into our own comfy beds. Home sweet home always feels so good!