A great deal of our planning conversations leading up to our Alaskan adventures involved at least some talk of bears. This in itself is pretty funny because over the past twenty years we have spent a great deal of time in bear country and have had dozens of personal encounters with black bears in the backcountry. In fact, we have always considered it to be a great privilege to happen across a bear. But for whatever reason, in our minds, Alaskan bears were a completely different animal - literally! 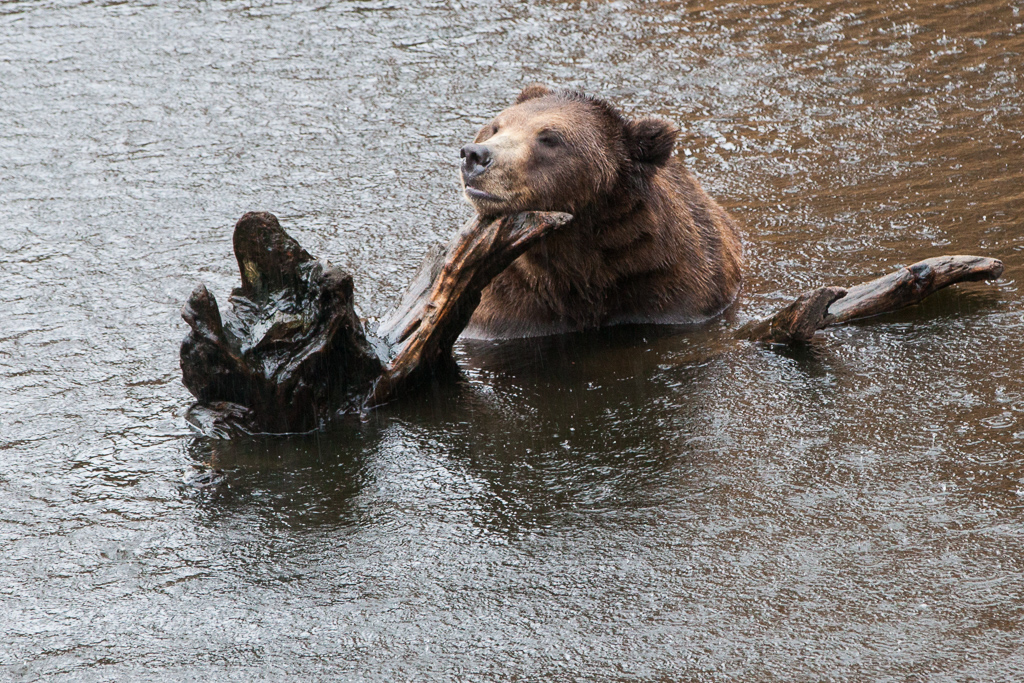 Bears have always held a special place in our hearts, but as we planned our adventures deep into the Alaskan wilderness, they became a life-threatening hazard to be avoided at all costs.

As we traversed Canada and entered Alaska, we asked every local we came across about their experience with bears and what they recommended we do to protect ourselves in the off chance that we encountered a bear. We kept looking for a nonchalant response along the lines of "Yeah there are bears, but it is unlikely you will see them and if you do, it's really not that big of a deal. You just..." We assumed that all the hype about bears was exaggerated and that someone out there had the same attitude we have always had toward black bears. We couldn't have been more mistaken. Everyone we asked had some horror story about a personal bear encounter that ended up in a gory attack. EVERY. SINGLE. PERSON! 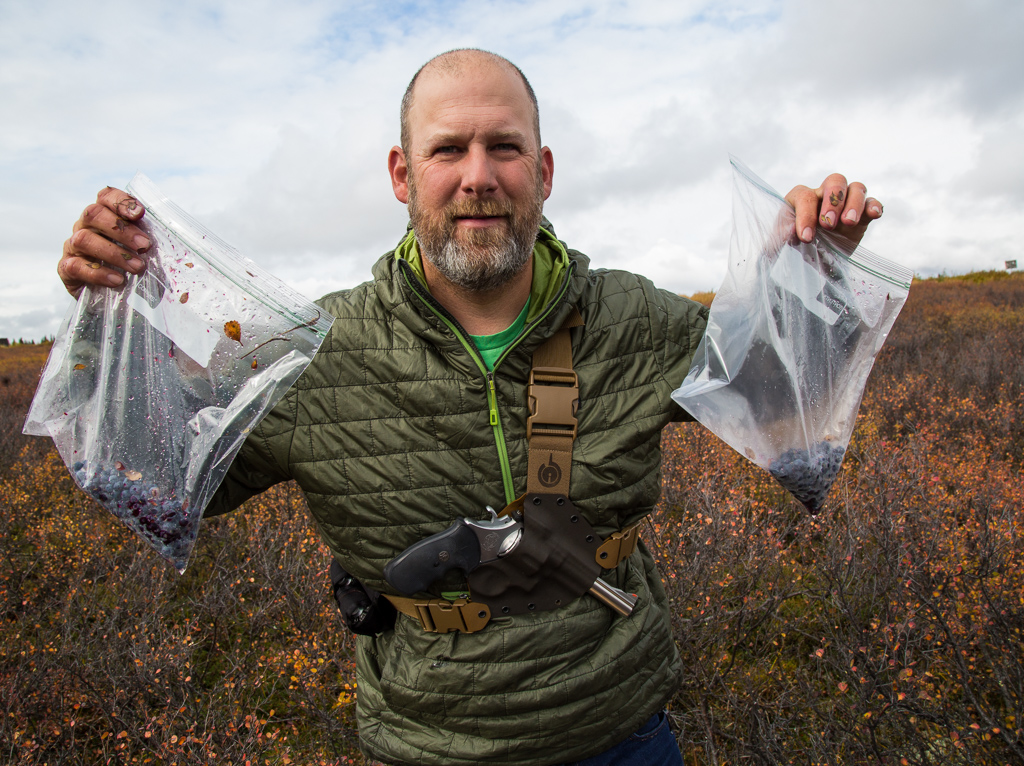 Peter is armed and ready for a blueberry picking expedition outside of Denali National Park.

Needless to say that by the time we arrived in Alaska, we wouldn't even step out of the RV without a can of bear spray and a firearm. We would cautiously open the door to the RV, slowly look around and then start talking loudly announcing our presence to any bears in the vicinity. City streets or remote wilderness, it didn't make any difference - we exited our View armed and ready for...well, bear! Tucker the Dog had his walks curtailed because we were afraid to wander too far away from the safety from the rig, and we were on high alert the entire time we were out on an adventure. We nervously made fun of ourselves for our paranoia, but bears were always in our thoughts, and even our dreams. As we drove down the road, we meticulously scanned the roadside for the army of bears we knew were lurking just out of sight ready to attack without any provocation.

Each time we arrived in a new location we would inquire about the imminent bear hazards in the area and would once again be besieged with a new tale of terror indicating our untimely demise from the menacing and predatory Alaskan grizzly. But after three weeks in Alaska without ever laying eyes a single bear, it occurred to us that there, in fact, may NOT be a bear behind every tree waiting for the opportunity to ambush us, and that perhaps by this point we had actually heard of every single bear incident that had ever occurred in all of human history. Suddenly, our own ridiculousness was apparent. While we continued to carry bear spray when we ventured into the woods, we began exploring farther away from the Winnie and actually started enjoying our time in the wilds of Alaska.

Two weeks later, we still had not laid eyes on a living grizzly bear, and our confidence in the wilderness was back up to pre-Alaskan levels - that is until we visited Haines. We arrived by ferryboat, well after midnight, and as we exited the ferry terminal came to a T in the road and had to make a decision. We knew there was a state park with camping in either direction. We elected to go right and made our way through the darkness out to Chilkoot State Park. We entered the campground to find large reflective warning signs that while not prohibited, tent camping was strongly discouraged due to recent bear activity. Exhausted from a long day of travel and cynical that any bears actually still existed in AK, we pulled into the first empty campsite and collapsed without a second thought. 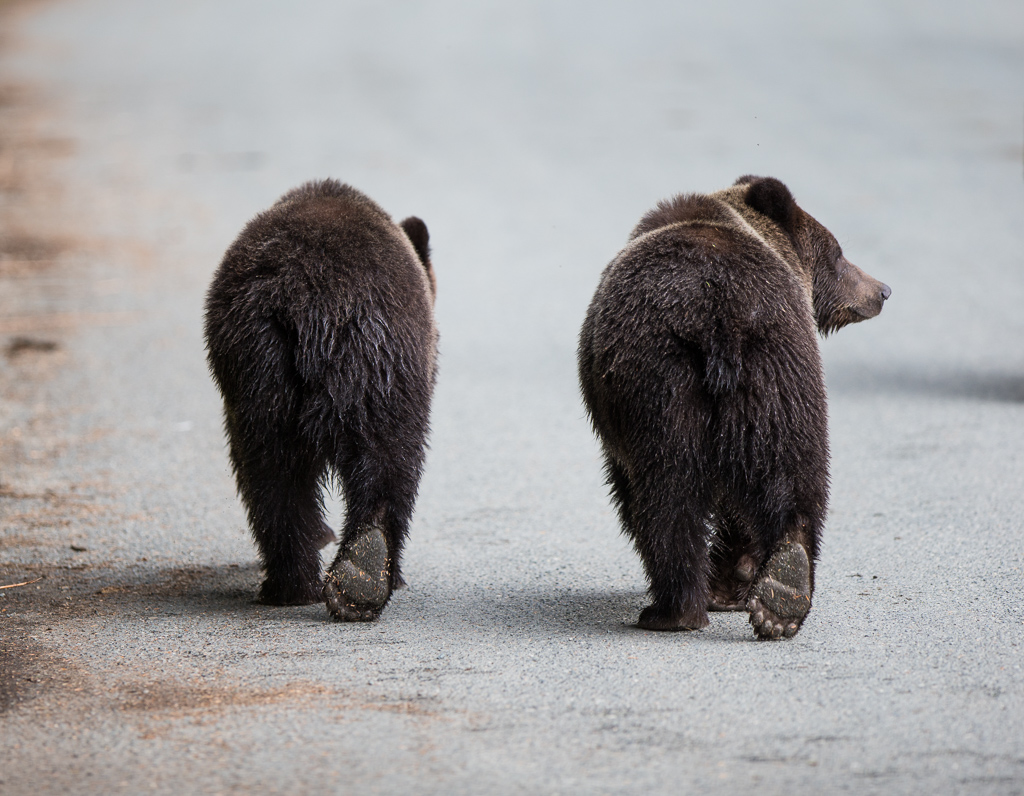 When the salmon are plentiful, the bears will elect to eat the brains and eggs, leaving a trail of carcasses in their wake which are quickly devoured by other scavengers.

The next morning we packed up the rig early and headed back toward Haines to see what the town had to offer, and not a mile from the campground I noticed three dark silhouettes meandering along the shore on the far side of the river. I squinted through the morning fog, and low and behold spotted my first grizzly bear(s): a mom and two adolescent cubs fishing for salmon less than 50 yards from the road. All of the fear and apprehension of a wild bear encounter that had consumed me for weeks was immediately replaced with awe and wonder as I watched the family of three slowly feast their way upstream alongside a salmon buffet. Sometimes one bear would dip a massive head deep in the water, emerging moments later with a writhing fish locked tight in its powerful jaws. The next moment, one cub would become overwhelmed by an ornery streak and tackle its sibling resulting in a mass of fur and feet tumbling about the riverbank. All the while, momma bear kept watch of the comings and goings along the river road. Eventually, they made their way across to our side of the river, both the bear family and the Holcombes keeping a watchful eye on each other. As they drew closer, we retreated to the safety of the RV, trembling with nervous delight as we watched them march single file right below our window. They were so close, we could smell the stench of salmon on their fur. 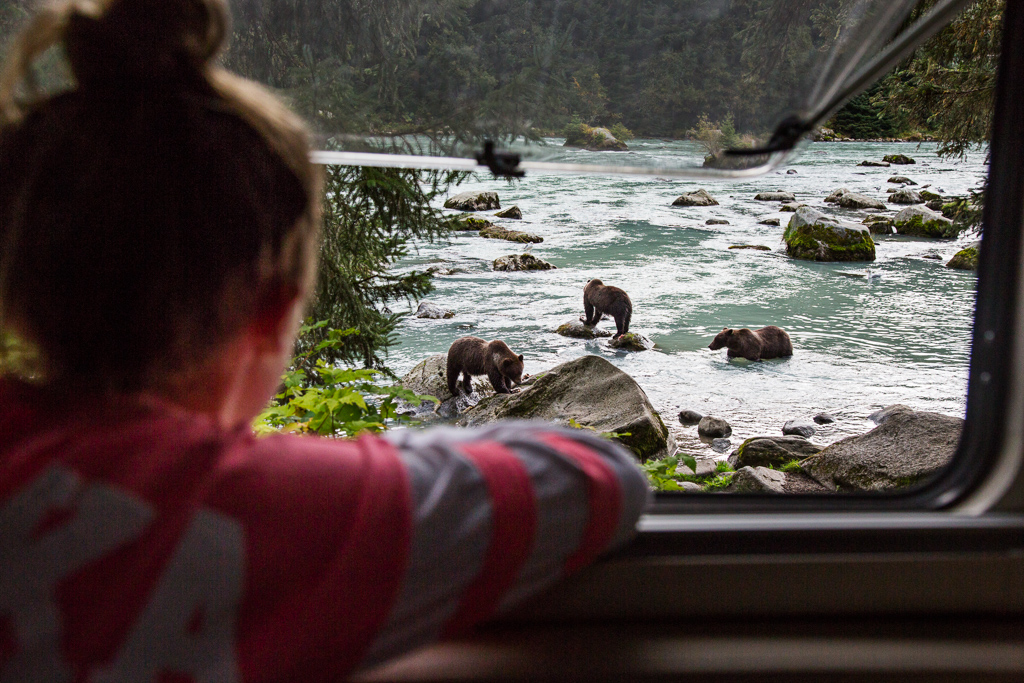 Abby watches the three bears from the safety of Winnie the View.

We spent most of that first day in Haines in an intricate ballet with the bears, venturing out at times from the safety of the RV, wanting nothing obstructing our connection with the magnificent creatures before us, and then retreating back into our sanctuary of safety the instant we detected a change in their body language: a shift of the ears or change of expression. 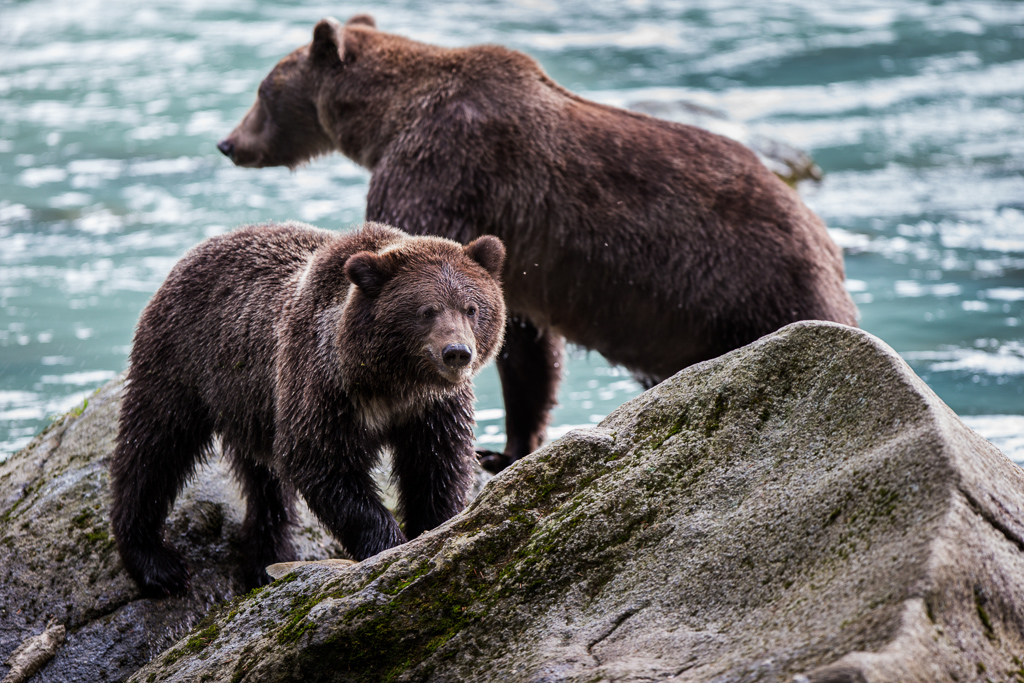 Bears are incredibly expressive. When they feel threatened they will pucker their lips or lay their ears back, similar to a cat.

We returned to our campsite at dusk and as I was cooking dinner, I noticed a shadow bolting through our campsite out of the corner of my eye. I poked my head out the door to witness the shadow launch in a single bound onto the massive dumpster at the edge of our site. It was an adolescent Grizz running amok in the campground. From the dumpster, it bolted through three sites in a flash and was gone, but you could hear shouts of fear and the clattering of dishes as the bear tore through one site after the next wrecking havoc on anything that dared cross its path. Our romance with bears developed as we watched the family calmly feeding along the riverbank was shattered in an instant as we witnessed just how destructive a grizzly could be. The next morning as we walked Tucker we heard countless stories of the renegade bear stealing dinner and destroying property throughout the campground. 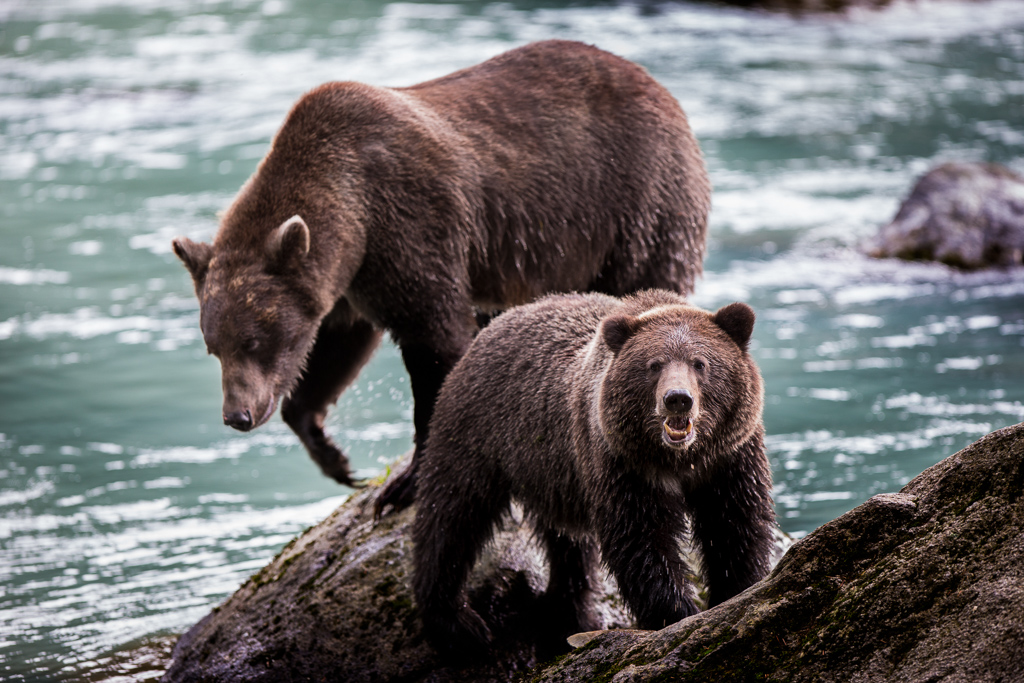 It is likely that this is the adolescent bear running amok in the campground, destroying anything in it's path. We spotted him the next morning just downstream from where we camped.

Undeterred, we returned to the river bank the next four days straight and watched the mom and her cubs fish and frolic along the river's edge. I could have spent a lifetime there taking it all in - the savage feasting upon the salmon who had the misfortune to share an eddy with the bears, the playful shenanigans of the cubs, the multitude of expressions that shifted like the wind, but most of all the interactions of the small family of three that we spent so many days with that were not so different from my own. Ironically, my impression of bears had come full circle during my time spent in Alaska: my overwhelming fearfulness replaced with a healthy respect, appreciation, and admiration for the notorious Grizz - a true privilege to behold. 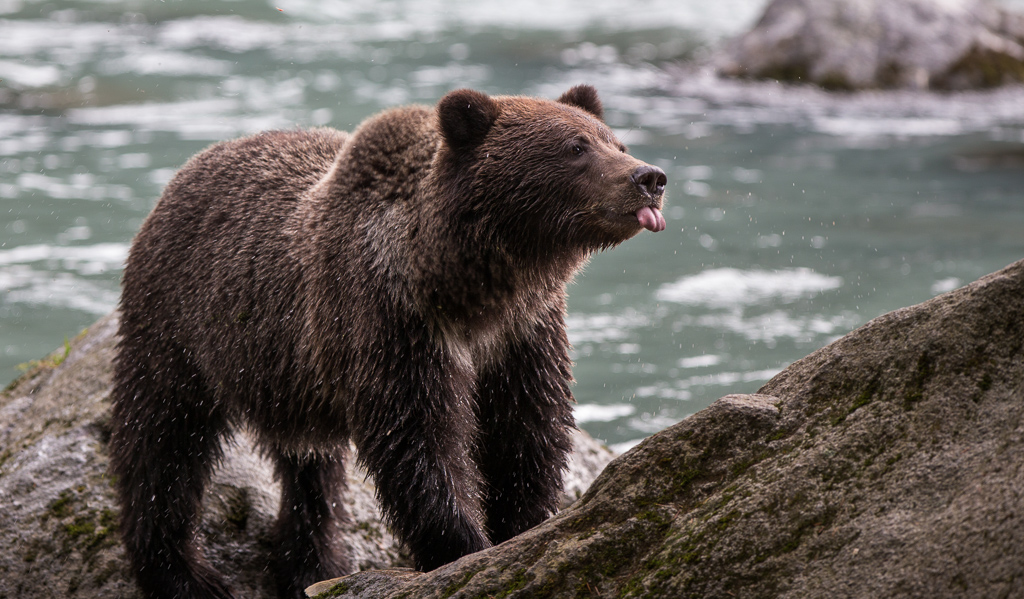 The notorious Grizz is a privilege to behold, and one that I am looking forward to crossing paths with again, preferably while comfortably inside Winnie the View.