An RV Trip Through the Springs of Florida

We've lost track at how many times we've spent visiting Florida to escape the cold. It has usually been along the Gulf or Atlantic beaches or one of the Orlando parks. But over the past few years, we've 'discovered' the beautiful and unique springs of Florida.

I had visited some of these many years ago, as a youngster, with my family. My father called them 'tourist traps,' but we always stopped at one or another because these were the precursors to the mega parks of Orlando. So, it was nice to rekindle childhood memories when we set out in our RV to see these springs.

Yes, it really was a thrill to see that the mermaids are still performing at Weeki Wachee, using the same device for breathing (or so it looks), as when I was a boy of eight! The spectacular water-skiing extravaganza of Cypress Gardens was also rather spectacular. But the best was the cruise in a glass bottom boat at Silver Springs. Our guide the day we visited said he had been running this boat for 60 years ... and I think I must have met him a long time ago! His boat trip and narrative have only improved with age. 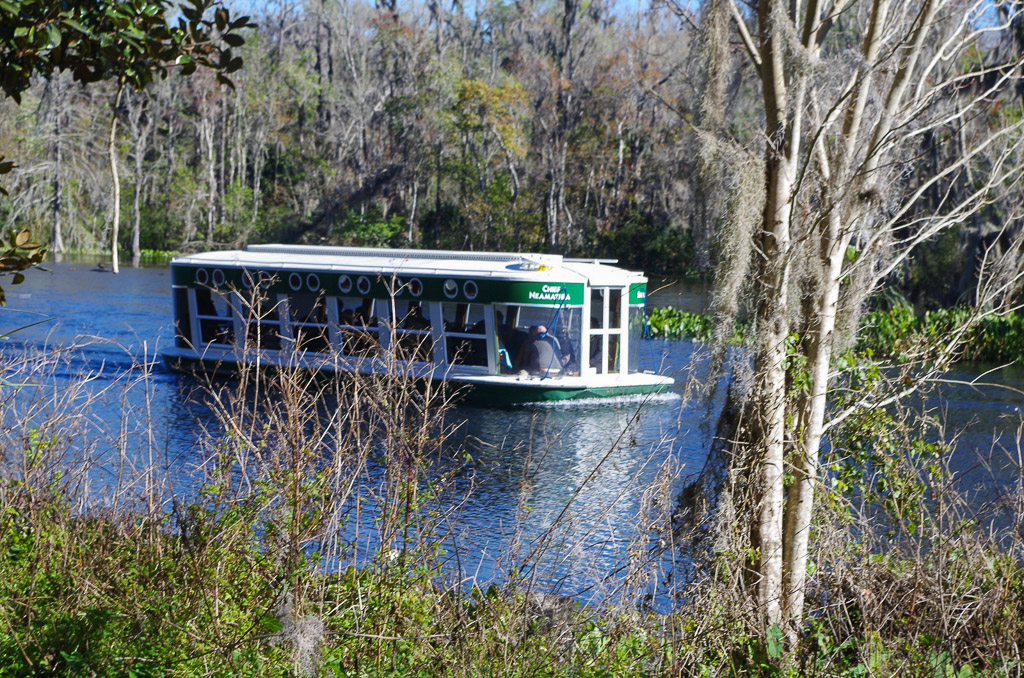 Even with these childhood memories, we had no idea of just how extensive Florida's natural springs were until we started to travel and camp in the north central part of the state. Over 1,000 springs have been identified, with several of them rated a first magnitude spring, discharging hundreds of millions of gallons of water daily. The massive aquifer under the limestone geology of this area has created springs, underground caves and lakes, where water gushes out of the ground amidst picturesque surroundings and diverse wildlife. This is not a "when you've seen one, you've seen them all" experience. Each is unique in its wildlife, setting, recreational opportunities, and campgrounds. 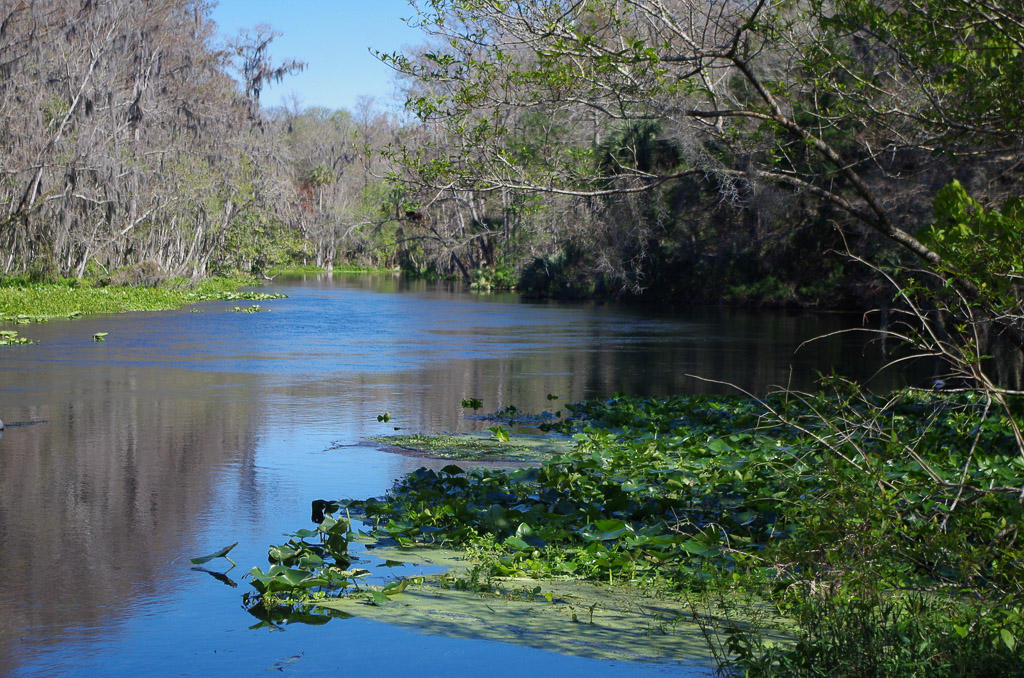 The springs of Florida have created incredible recreation opportunities as we've discovered during our travels. The crystal-clear spring waters at constant temperatures of 70 to 74 degrees make for some great adventures.

We plotted out a journey that is filled with great activities, and yes, tourist attractions! Starting with mermaid watching, we roll along to the many state parks and national forest campgrounds. Along the way, we swim, snorkel, canoe, kayak, hike, bike, and best of all, watch the adult and baby manatees as they swim into the spring areas to stay warm during colder months in Florida. 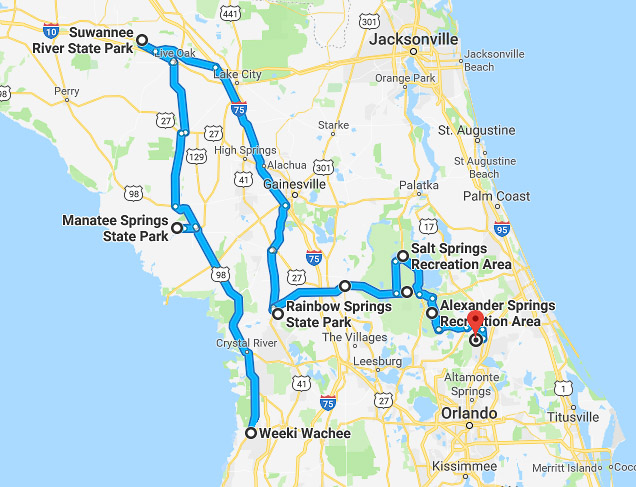 First stop, Weeki Wachee. Here's the grand daddy of all Florida's attractions, first opening in 1947. Privately managed for years, the state of Florida took over the operation when this and many of the other attractions hit upon hard times. Where else can you watch an underwater ballet with 'real' mermaids?

Billed as "The Only City of Live Mermaids!", Weeki Wachee, has daily shows with mermaids swimming and performing, while you sit in a 50-seat underground theater looking out into the natural spring. Following the show, we were lucky enough to have some photo ops with one of the mermaids before checking out the gift shop for some great aquatic gifts. 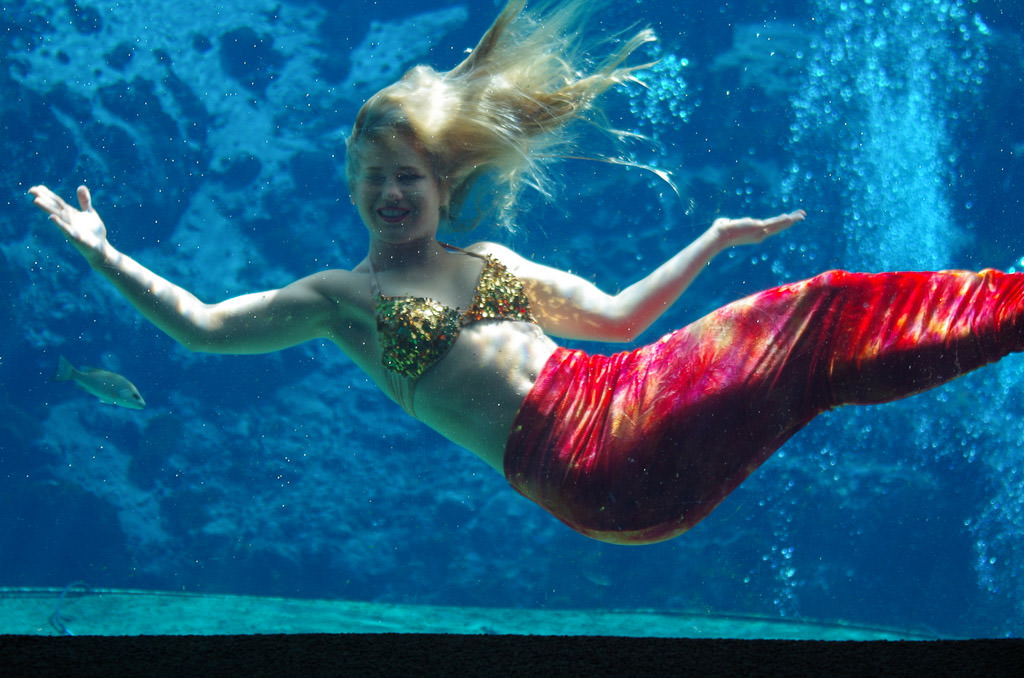 This is the only attraction we've listed that does not have a public campground as part of the grounds, but there are numerous private campgrounds nearby.

Now onto some spring hopping ...

Boasting "Majestic Cypress Forests", an eight-foot boardwalk, and a historic river (the Suwanee), we were excited to explore Manatee Springs State Park and snorkel in this first order spring. It's amazing to watch the clear water spewing out of the ground.

There are trails leading around deep sinkholes meandering through ancient forests along the pools formed by the natural spring. This state park is also well located to take advantage of the regional biking trail. The paved Nature Coast Trail heads north from nearby Chiefland for 32 miles. 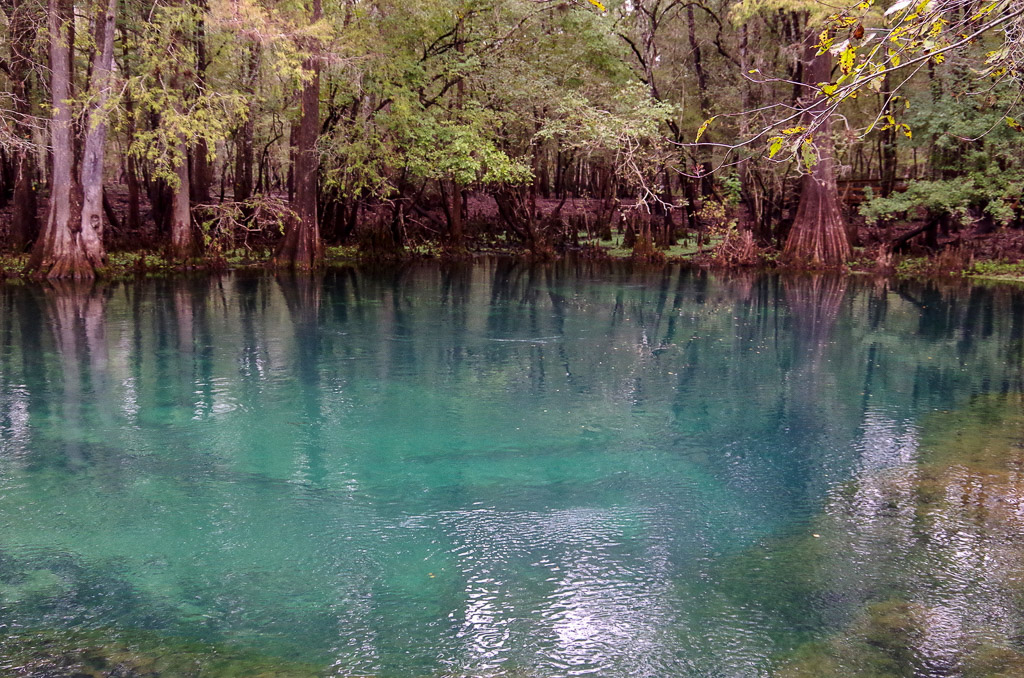 One day we took this trail up to Fanning Spring State Park and took advantage of this parks swimming area to dive into the clear waters. Though the sign says beware of alligators, we were told that while there could be alligators, there really never are (if you want alligators - check out this other Florida road trip itinerary). Well, we checked the area thoroughly before getting in. But with the crystal-clear waters and plentiful fish, we were able to relax and enjoy our refreshing experience - while keeping our eyes wide open, just in case.

It was time for us to "go way down upon the Suwanee River." So, we contacted a local excursion company that picked us up at our campsite and dropped us and our rented canoes and kayaks to a put-in place seven miles upriver. We won't dwell on our trip as we got caught in a downpour after we left the river bank and didn't stop for three hours ... But this is another beautiful spring to stop at. 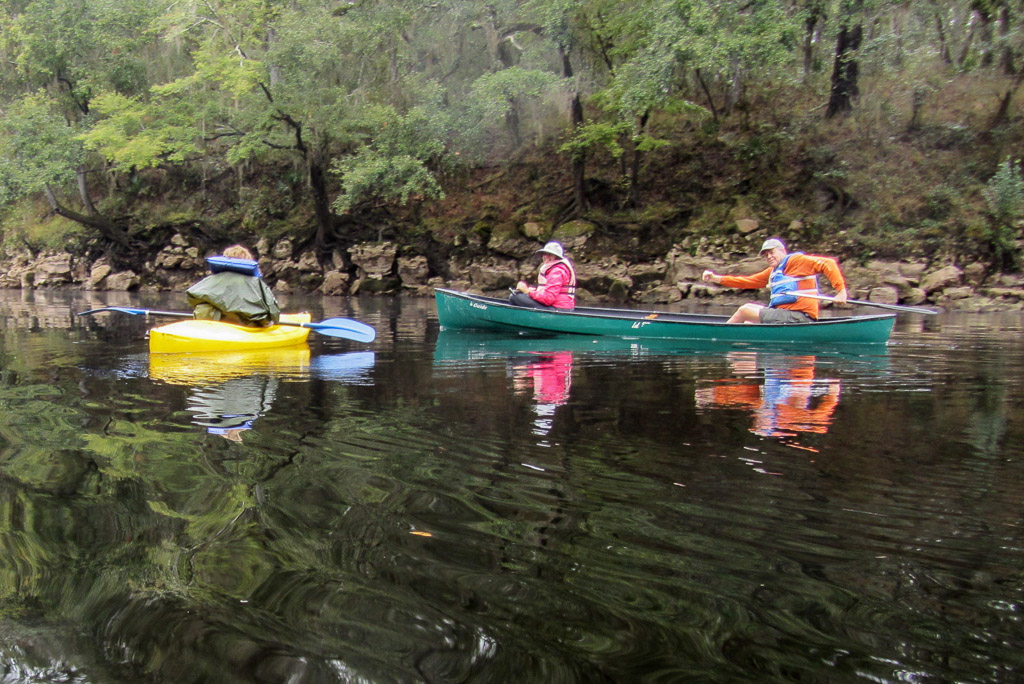 Our next camping stop, Rainbow Springs State Park, featured more bubbling spring water and three man-made waterfalls from when this was also a private attraction. In the warmer months, there is tubing down the Rainbow River, and there are canoe and kayak rentals year-round. 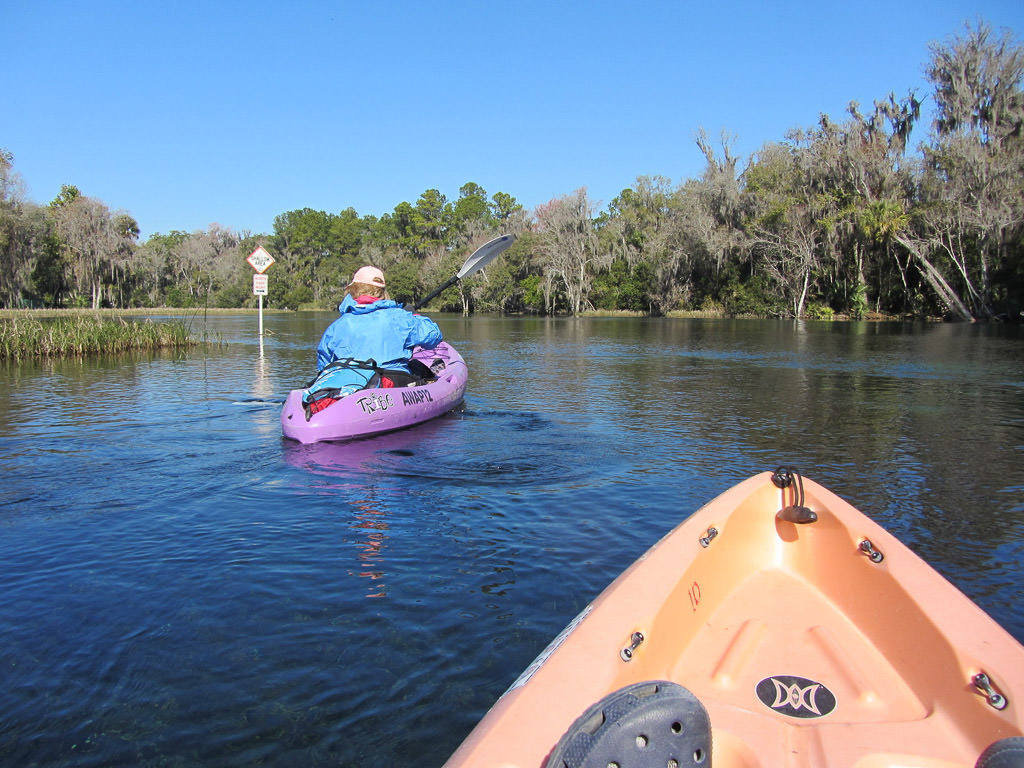 With tours of the largest artesian spring in the world, Silver Springs State Park may have been an even more popular attraction than Weeki Wachee. From the nicely developed campground, it was an easy bike ride on a flat trail through saw palmettos to where the glass bottom boats leave for their tour. The pools have been used extensively for a number of Hollywood films including Tarzan films and the famous, Creature from the Black Lagoon, as well as later television shows including Sea Hunt. 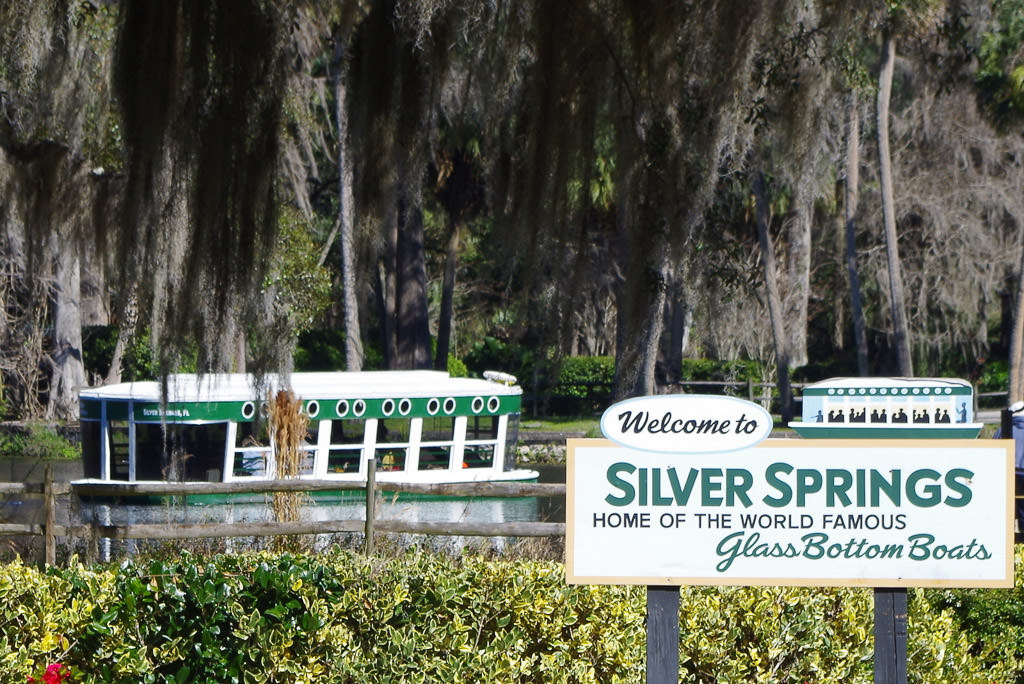 For our continued spring touring, we headed to the Ocala National Forest which has over a dozen campgrounds. Although most of these are small with no hookups, there are three larger and well-developed parks. Juniper Springs, our favorite, was developed by the CCC in the 1930s.

In addition to a nicely developed campground, Juniper has a natural swimming pool and a canoe trip that begins at the park and meanders for six-hours through a river jungle.

Alexander Springs, nearby, also has a swimming and canoe area, but in addition has access to the Paisley bike trail which is an off-road loop trail that winds through the oak and pine forests. Really cool! Salt Springs is unusual for a NF campground as it has full hookups. Even so, it was our least favorite, since the sites are very open and close together. Salt Springs also has a dedicated swimming area in clear spring water. 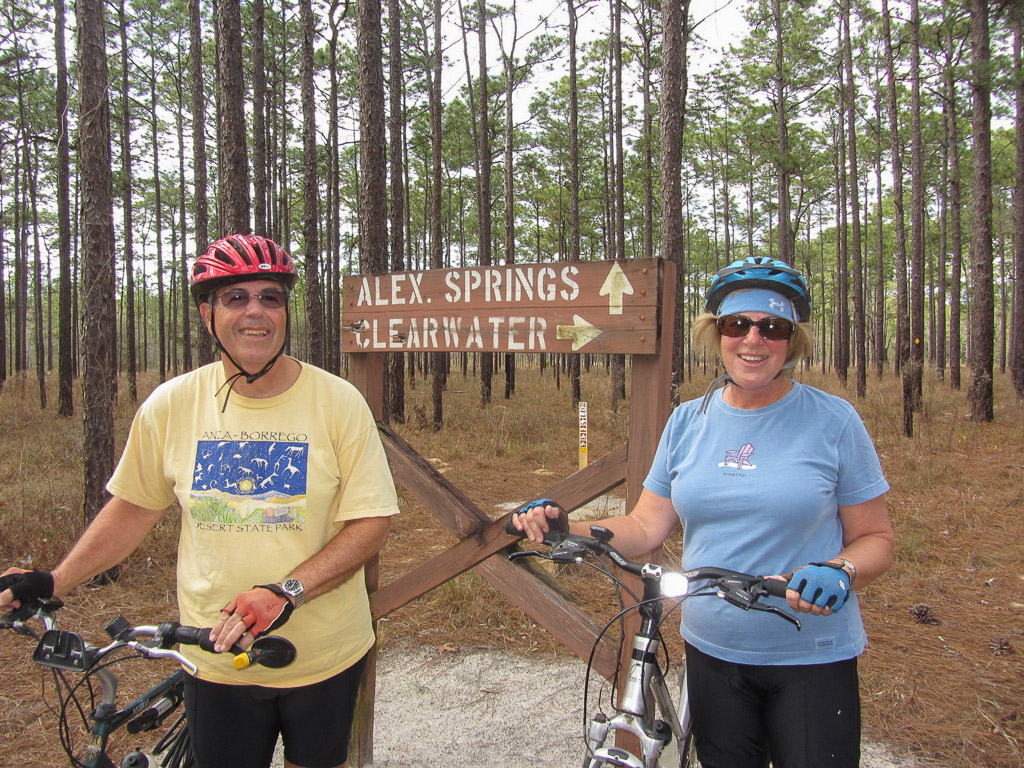 The final stop on our springs tour was Blue Springs State Park. The campsites are generally spacious and private, with the Florida vegetation separating them. What is unique about this large natural clear water spring is the presence of the manatees when the nearby St. Johns River is cold. We have counted as many as 30 manatees in the early spring, as well as viewing juveniles in the late spring and fall. 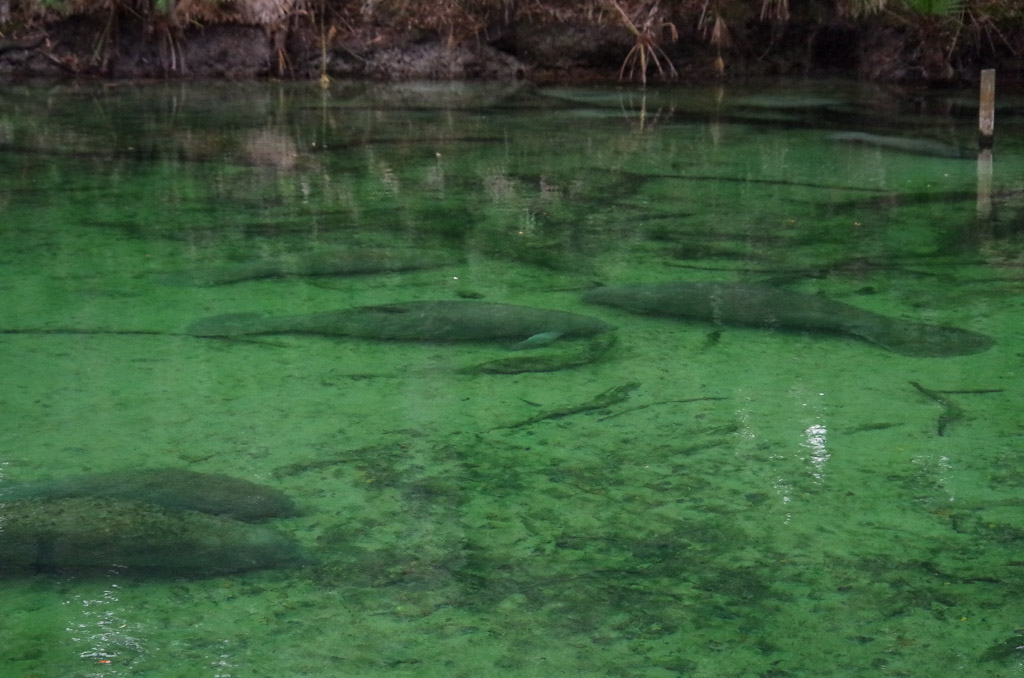 A gift shop and concessionaire sell refreshments, rent canoes and kayaks, as well as inner-tubes. Swimming and tubing in the river is encouraged - but not when the manatees are present. Since they come in when it's cold, that means it's usually too cold for human swimming anyway. There is also a motorized pontoon boat for those who prefer another way of seeing nature. 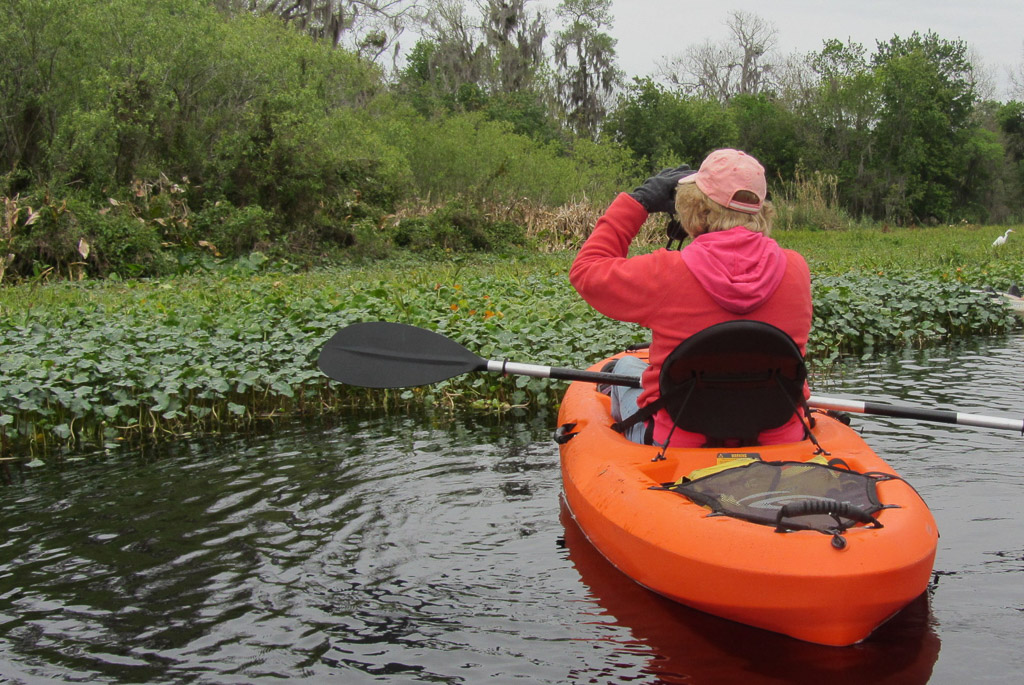 We hope you enjoy the springs of Florida! We've camped and viewed many of these, but there are so many more to explore. The one adventure we didn't partake in at these springs, was scuba diving into the watery caves throughout the limestone formations which may be worth pursuing if you enjoy diving.