Born in 1887, Georgia O'Keeffe lived in the age of the depression and the two world wars. Born in Wisconsin, and then art schooled in Chicago, New York City, and Virginia, she started spending time in the southwest. From her travels, she fell in love with what we call "O'Keeffe Country." This includes the western Texas panhandle, and the high deserts of New Mexico around the Abiquiu area. From this environment, O'Keeffe painted her incredible New Mexico landscapes and enlarged flowers, using the area's color palettes.

As one of our favorite artists, we decided to plan an RV road trip to follow in her footsteps, and sometimes her horse tracks .... all on the quest to better understand O'Keeffe and her art. 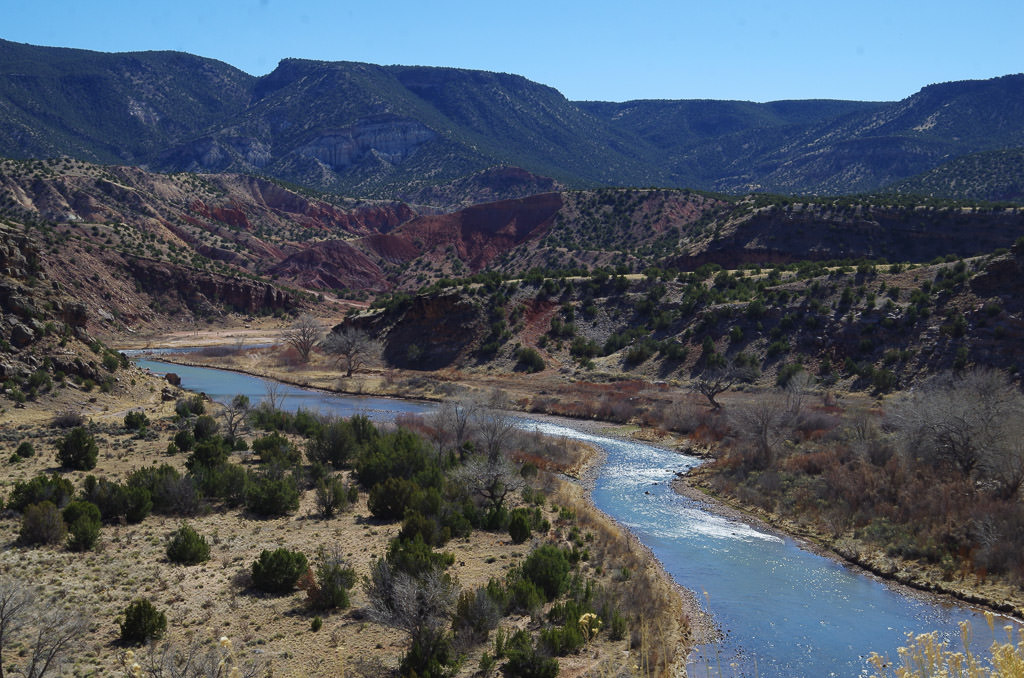 We started in Santa Fe at the O'Keeffe Museum on Johnson Street in Old Town. This museum displays more of her works than any other venue. The museum also exhibits other artists' works in the O'Keeffe style. Taking a docent-led tour gave us a better understanding of her life and art.

As part of our Santa Fe visit, we caught some great Tex-Mex food and, of course, we had to make a stop at the Kiawa Chocolate House. What could be better than some hot chocolate or an iced mocha on a hot day. Then we walked up Canyon Road, stopping in many of the art galleries. 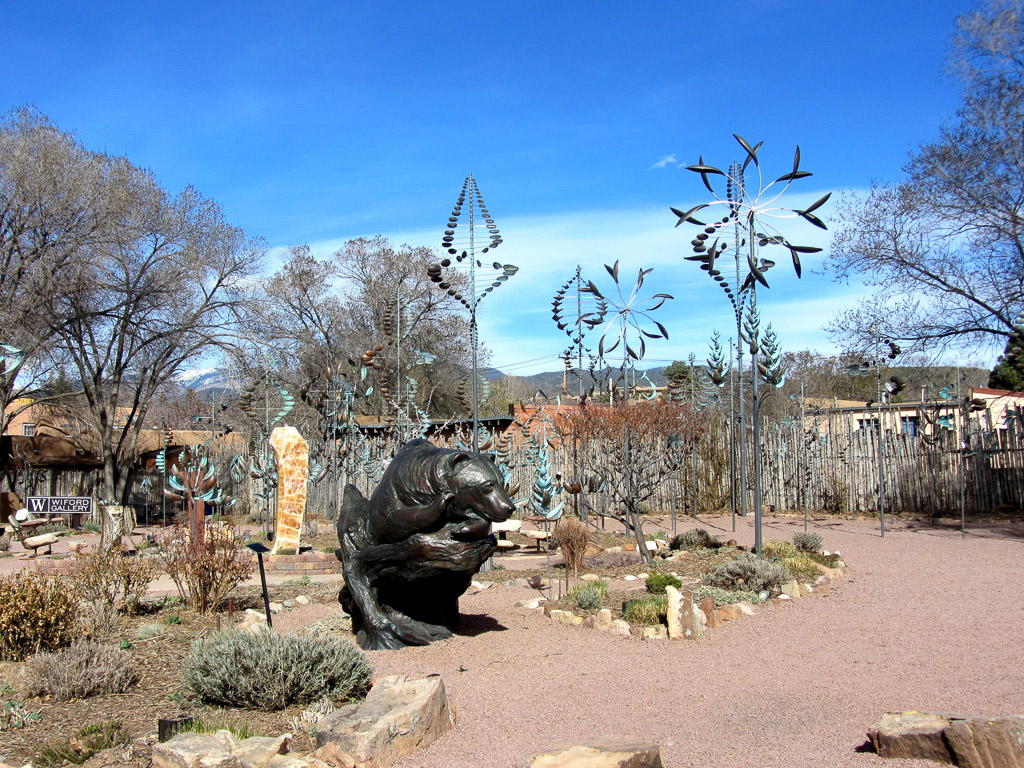 Now that we had a better knowledge and understanding of O'Keeffe's works, we headed up to Abiquiu, 50 miles north of Santa Fe. Abiquiu is where she spent much of her later life, both at Ghost Ranch as a guest, and later at her home that she restored from an old hacienda.

For our overnights, we camped at Echo Amphitheater, a national forest campsite just north of Ghost Ranch. Although this place had no roots with O'Keeffe, she must have visited this unique and storied rock formation. There is also a nearby Army Corp of Engineers campground, and a seasonal campground at Ghost Ranch. 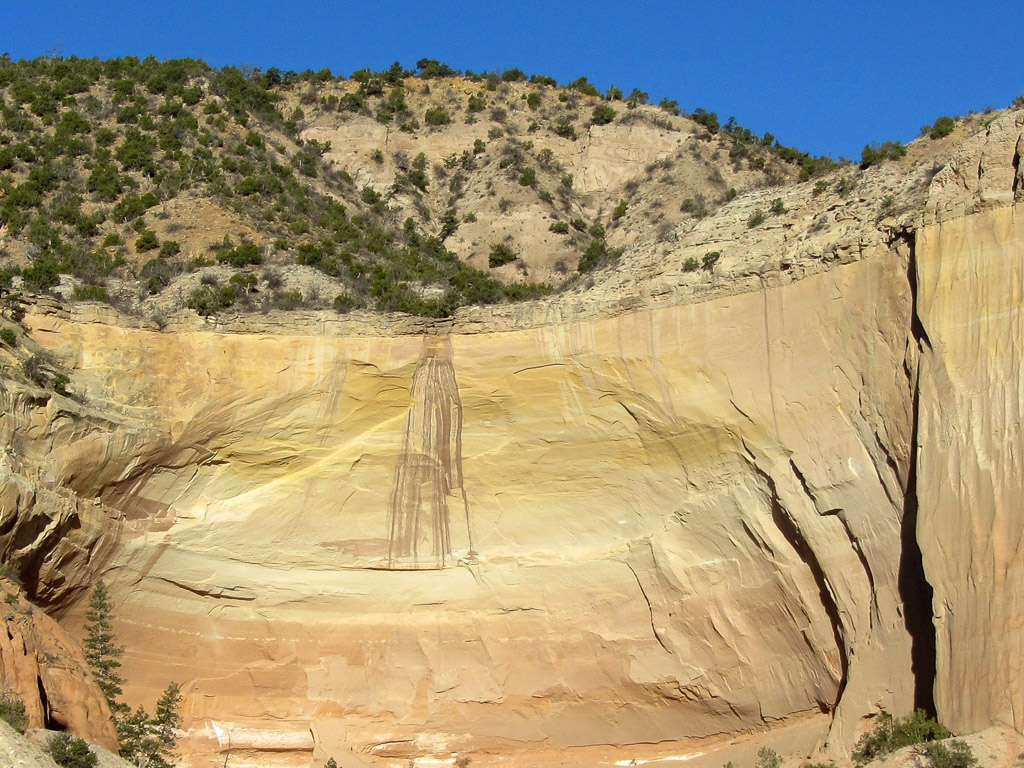 The following day, we first stopped for lunch at the long established, Bode's General Store in the heart of Abiquiu. A great place for a meal, but an even better place to wander around the great selection of southwestern giftware which will remind us for many years of our visit. Although we didn't meet the owners of the general store while visiting, we did meet the Liddy's on a later trip while hiking Natural Bridges National Monument. We shared with them our fondness for both the food and gifts of their mainstay store in Abiquiu.

We then headed nearby to the tourist office at the Abiquiu Inn where the tour begins for O'Keeffe's home. We had purchased tour tickets prior to our trip start, as these sell out well before the date. (Advanced sale of these tour tickets is available on the Santa Fe O'Keeffe museum web site.) We watched a 7-minute video, and then the 12 of us on the tour headed over by van to the house. Prior to O'Keeffe securing this home, she had lived seasonally at Ghost Ranch. 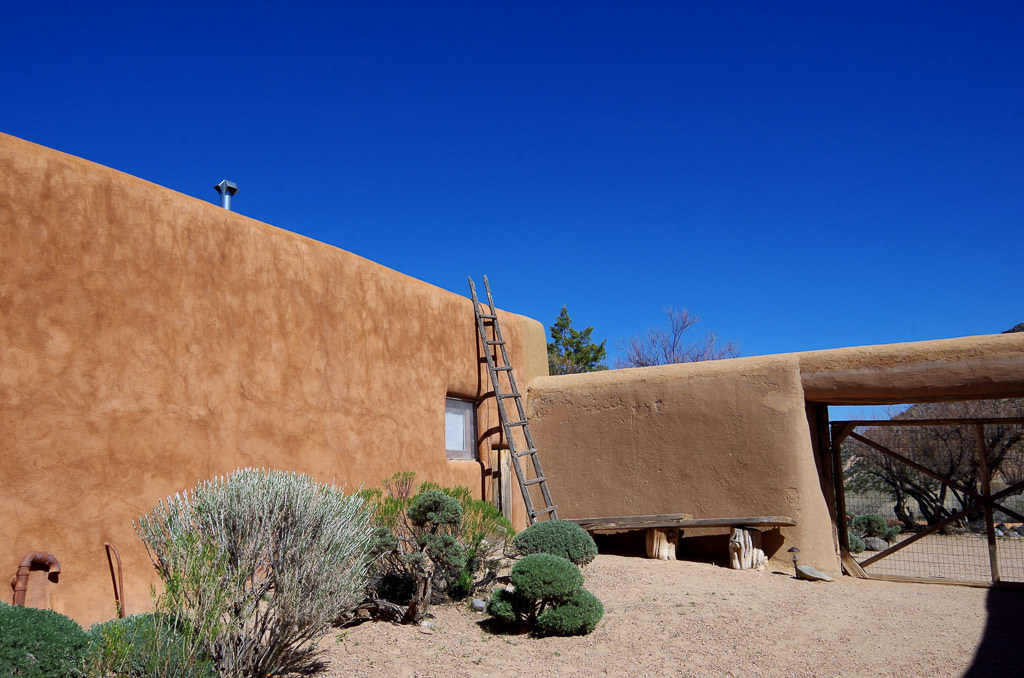 The abandoned property had been owned by the local Diocese, and it took O'Keeffe 15 years of persistence to finally purchase this property. She restored the home, converting it into her studio. While living in Abiquiu, she donated considerably to help raise the standard of living for the local community. As O'Keeffe aged, the community then took care of her. We had an excellent docent who pointed out many of the landscapes that were used for her art. It was also fun to see the furnishings and appliances that were left intact following her vacating her home in 1984 for her final two years, when she moved to Santa Fe to obtain better medical care. The 1970s were well represented.

From here, we stopped at the Plaza Blanca, now owned by a local mosque, but open to the public. She called this area, "her White Place", and she painted it frequently. We hiked the area and noted the colors of the rock and the plants; all used in O'Keeffe's paintings. Quite an amazing place. 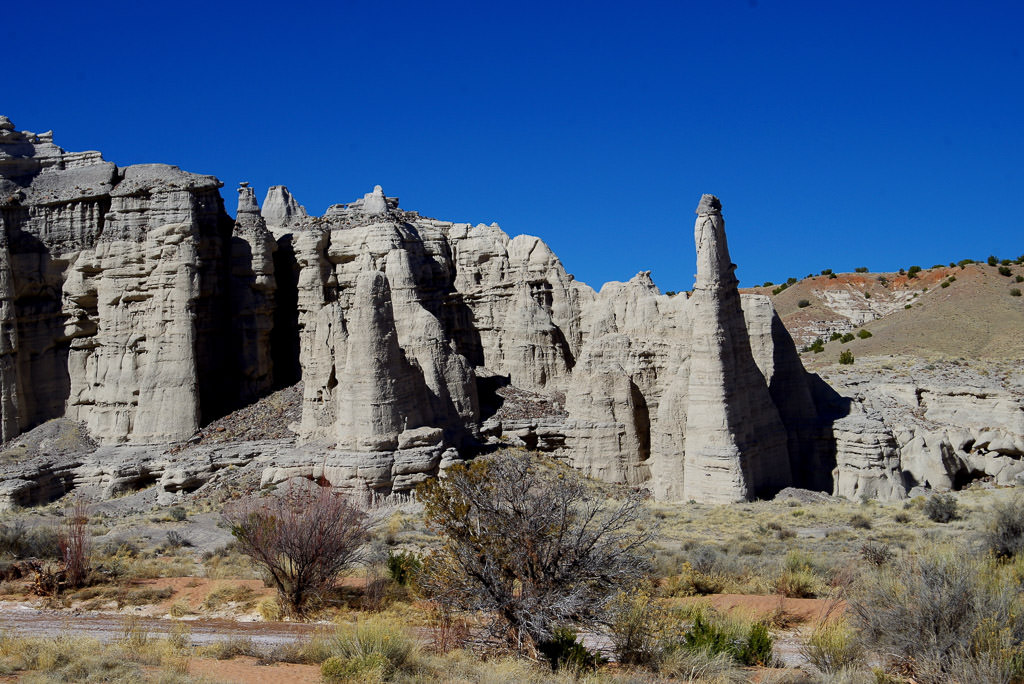 Ghost Ranch was our final stop on our Abiquiu tour, and the most dramatic area we visited on our quest. Ghost Ranch today is an education and retreat center offering overnight accommodations, horseback trail rides, and numerous programs. As my wife writes, "I have totally fallen in love with this area, just as Georgia O'Keeffe did. I can't recall any place that has had this concentration of undisturbed beauty." 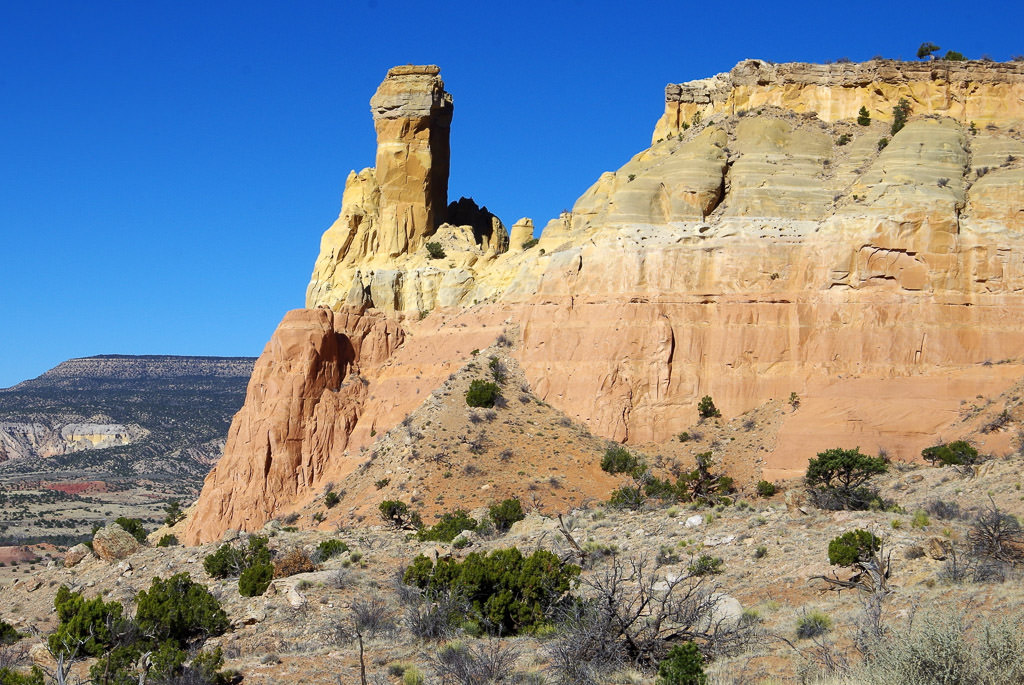 First, we hiked on trails at Ghost Ranch; which included some climbing for beautiful vistas! We then took one of the many offered guided tours showing us the locations at the ranch where O'Keeffe painted. The guide would hold up a print of one of her paintings, against the backdrop of where it had been painted. Even though years have passed, the landscape endures.

Since we were heading east, we stopped for a few days at Palo Duro Canyon State Park just south of Amarillo, Texas. One of O'Keeffe's first jobs was as a school teacher in this area. Hiking the trails at the park, we could again see how the colors of the rock and fauna influenced later O'Keeffe paintings. Palo Duro is the second largest canyon in the U.S., but unlike many other canyon parks, at Palo Duro you drive down to the canyon floor with your RV. Once at the bottom, there are several campgrounds along with many miles of well-marked hiking trails. These trails wind through the canyon with magnificent vistas.

We would have ended our Georgia O'Keeffe quest here in Texas, except we had heard about a recent record purchase of one of her paintings. We had to see this painting that went for $44 million; purchased by the Walmart Foundation for their Crystal Bridges American Art Museum in Bentonville, Arkansas. A little off our planned route home, a stop at Crystal Bridges was required (what's a couple of hundred miles?).

Of course, we saw the famous O'Keeffe painting (surprised by no display hype), but then we saw a whole lot more. Landscape paintings from Thomas Moran and Albert Bierstadt, Native American photographs by Edward Curtis and paintings from George Catlin. This art is displayed in an architecturally beautiful setting which brings the outside landscape inside and makes it part of the experience. Outdoors, there are walking paths and when we were there, spring flowering trees. We're glad we made this final quest stop! This museum could be its own adventure. 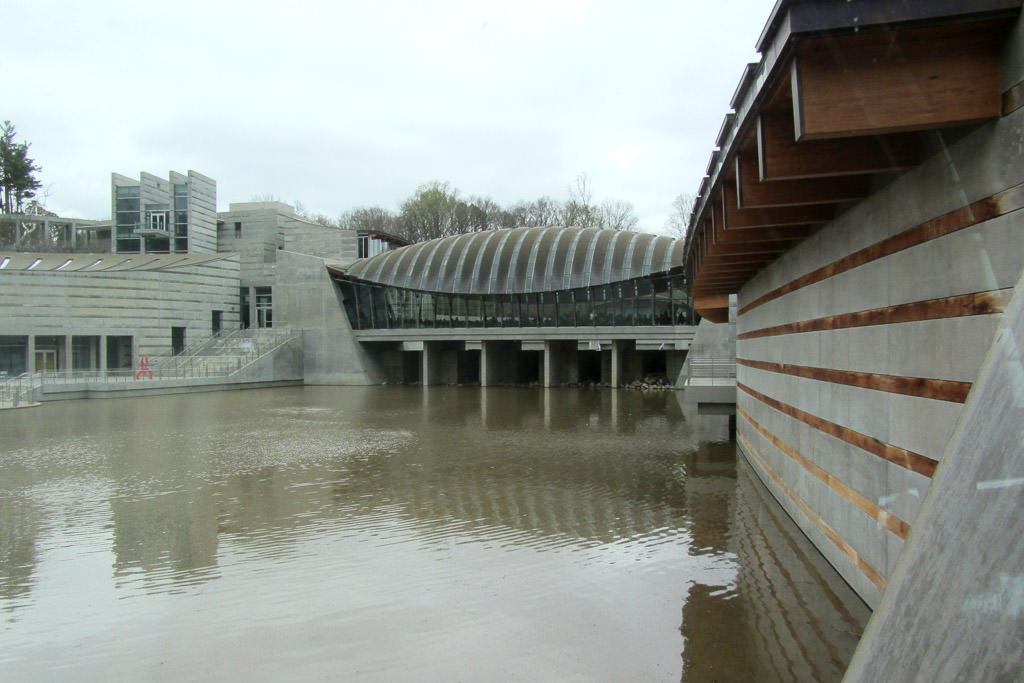 The wonders of RVing!