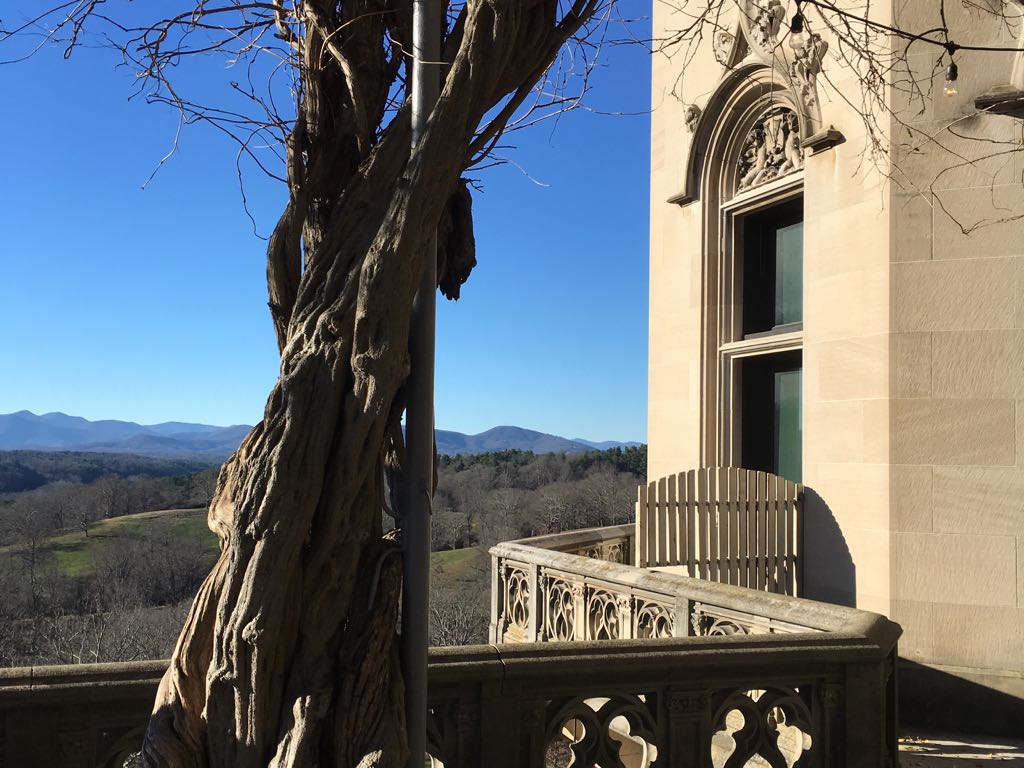 Most people probably come to Asheville to visit George W. Vanderbilt's cozy cottage, Biltmore, but there's so much more to sample in this fantastic town.

Asheville is a picturesque town nestled in the Blue Ridge Mountains of North Carolina. The scenery and climate was deemed so lovely by George Washington Vanderbilt that, in the late 1880s, he purchased some 125,000 acres upon which he would build his mountain escape that he would call Biltmore. He hired Richard Morris Hunt as architect and, always wanting the very best, employed Frederick Law Olmstead, the creator of New York's Central Park, to design the grounds.

He first opened the doors of the opulent estate to invited friends and family on Christmas Eve of 1895. Seeing that we would be in the area with the approach of the holiday season, it seemed only appropriate that we plan a stop in Asheville. That was one of the best decisions we'd made all year! And while Biltmore, all dressed in its holiday splendor, was truly beautiful, there's so much more to do, see, and eat in and around this charming town. 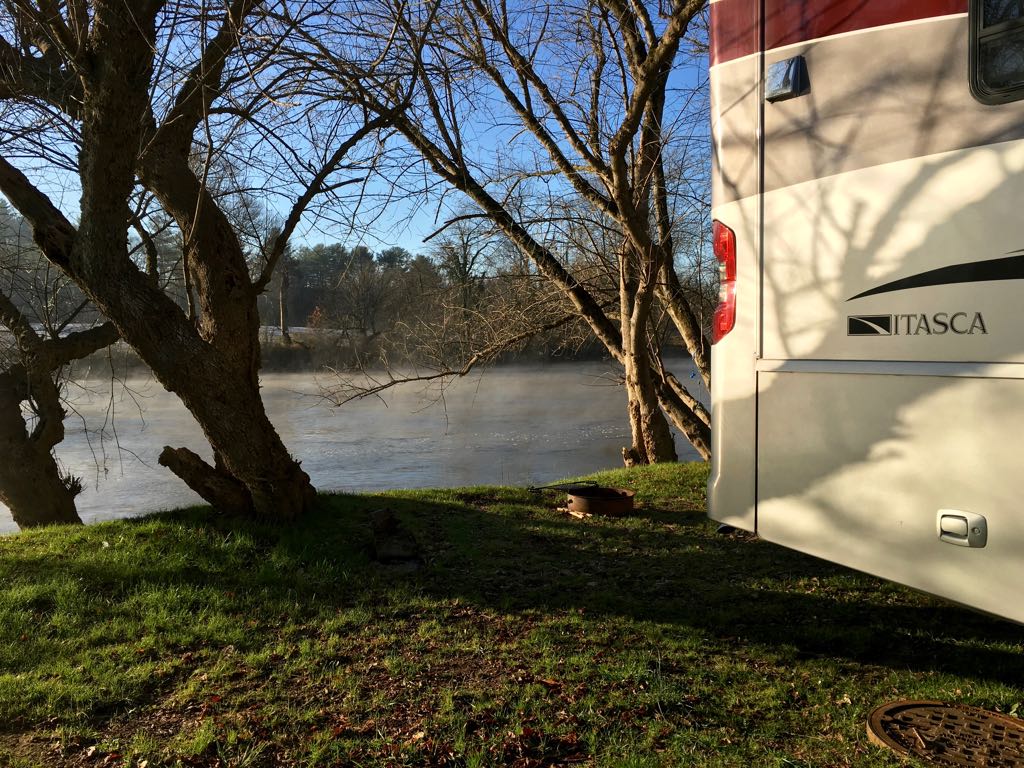 Our rig stuffed into a spot at Wilson's Riverfront RV Park that backed up to the French Broad River.

Temperatures were down to a balmy 27F when we woke up on our first morning in Asheville to meet up with our Instagram friends @vandyvagabonds for an early breakfast at Biscuit Head. Meeting new friends on the road has been the best part of our travels, and there's always something to talk about when you both have the itch for adventure. We share a love of good food, and they enthusiastically recommended what would become our favorite doughnut shop in the country. Yep, country. 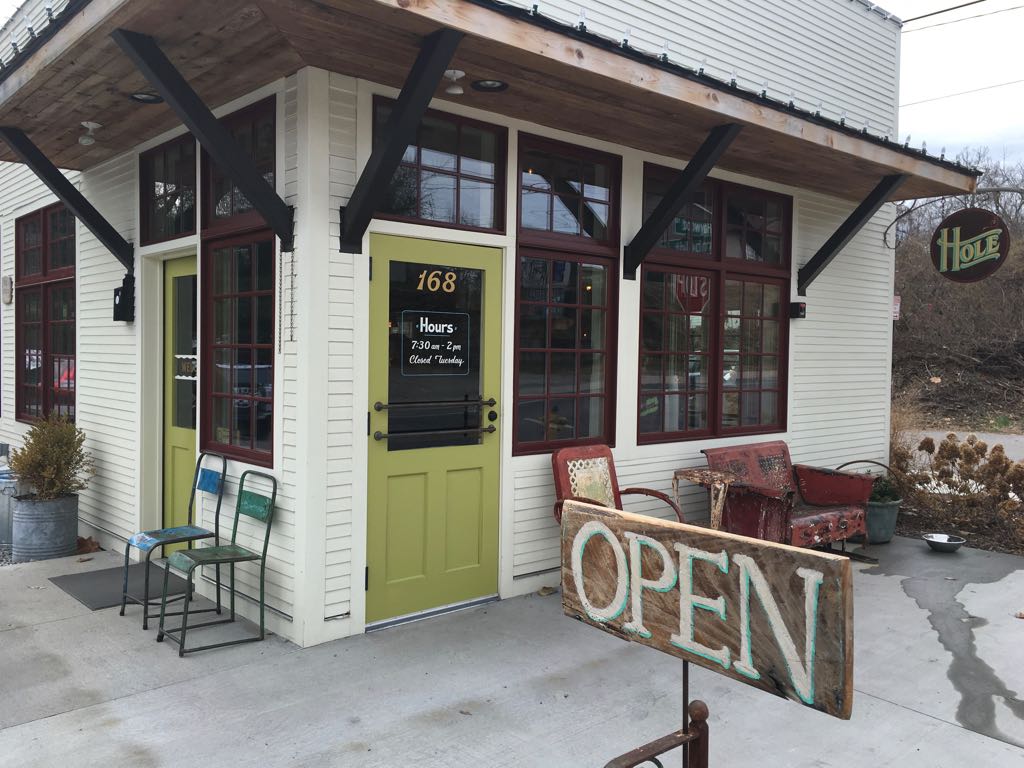 Hard to find a quainter little donut shop than Hole. This image has some Pavlov effect on me, and I'm now drooling with food lust.

Caroline and Kim are the two brilliant minds behind Hole Doughnuts. Their first foray together into baking elliptical delights was the popular Tin Can Pizzeria food truck, but they sold the business in 2014 to build a new factory of magic. Step inside the cozy little building at 168 Haywood Rd -- with a cute little blue bread truck outside, you can't miss it -- and your sniffer is met with the intoxicating bouquet of made-to-order yeast doughnuts. Yes, that's right. Made-to-order. They offer a changing menu of featured glazes and rubs, ranging from lemon cayenne to grapefruit bourbon. We sampled all the flavors they offered during our visit and came away with two favorites. Jenn loved the cocoa rub, a blend of powdered cocoa and ground coffee, while I couldn't get enough of the bourbon and bay leaf glaze. It's a beautiful place for those with gastronomic inclinations where you can watch your tasty treat come to life, from risen dough to a little puffy ring of fried heaven. Go forth and sample, but don't say we didn't warn you as you just might find an addiction. 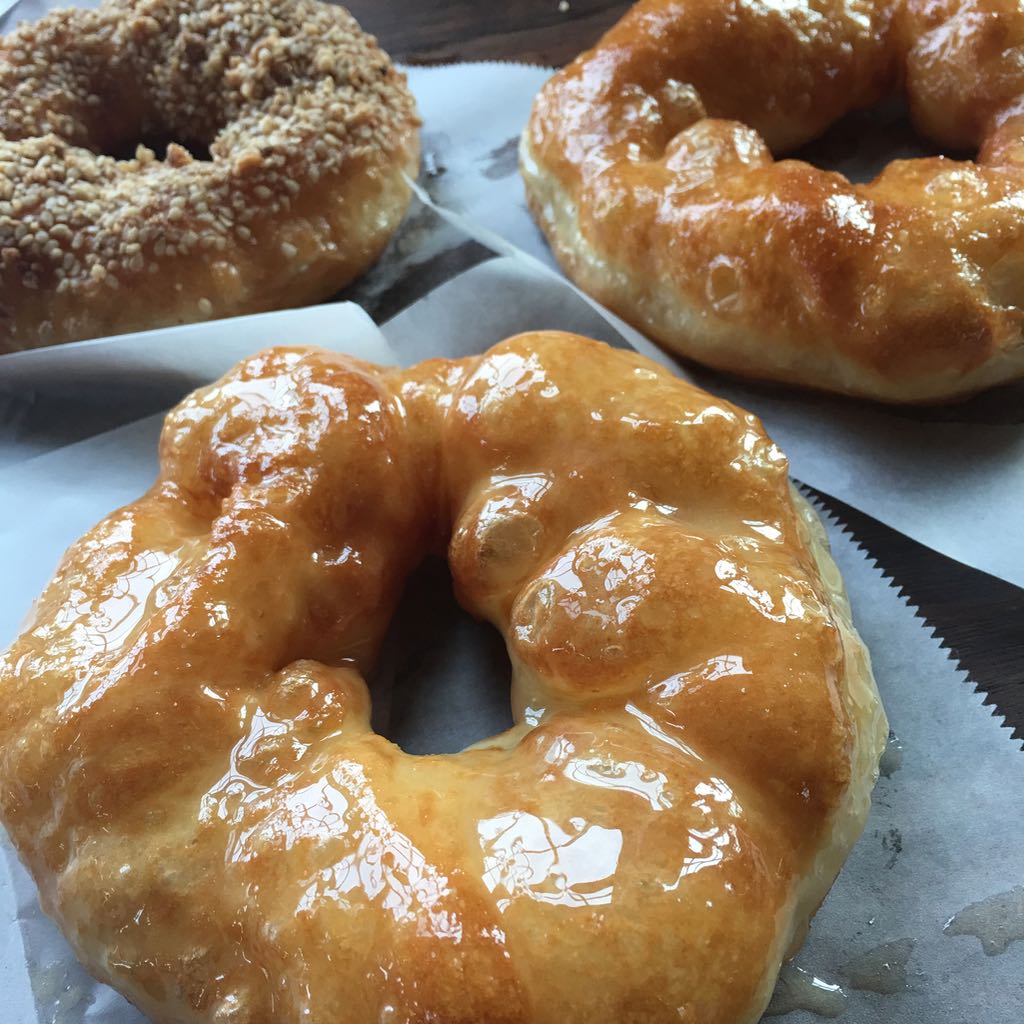 Made-to-order doughnuts, featuring their bourbon bay glazed front and center. I wonder if they will overnight these to our next destination?

How's your sweet tooth? If you've still got it, step aboard the Asheville sweet train for our next stop: French Broad Chocolates. Before you go off thinking that we left a doughnut shop to tour a chocolate factory, let me add that these were not consecutive visits. There are plenty of delicious breweries to wet your whistle between stops and we'll get to one of our favorites shortly. 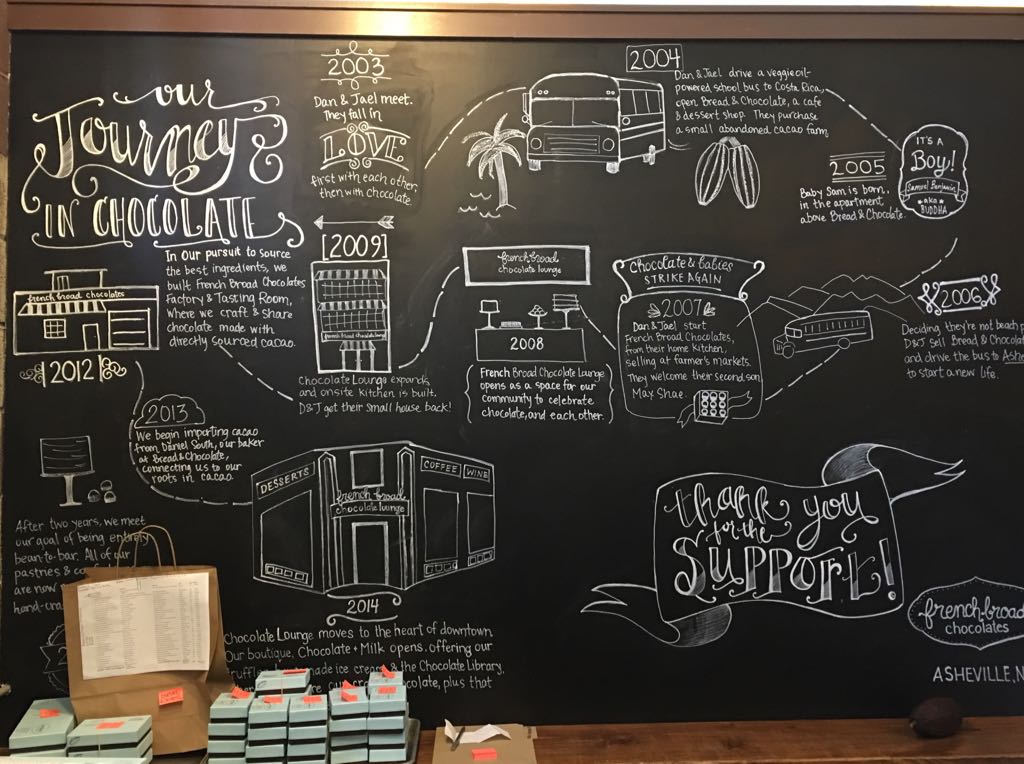 The journey that lead to French Broad Chocolates started when a young couple took their skoolie (converted schoolbus) on a drip down to Costa Rica and ended up purchasing a small, abandoned cacao farm. Love it.

Dan and Jael met in 2003, fell in love, and left graduate school in a 40-ft converted school bus running on vegetable oil bound for Costa Rica. Once there, they bought an abandoned cacao farm and opened up a cafe and dessert shop named Bread & Chocolate where they began to experiment with making chocolate. After selling the successful cafe, their chocolate journey would eventually lead them to Asheville, where their chocolate business would grow from homemade chocolates sold online and at local markets into two local establishments, the Chocolate Lounge and the bean-to-bar French Broad Chocolate Factory and Tasting Room.

While we didn't make it to the Chocolate Lounge during our brief stay in Asheville, we did manage to reserve a spot on the guided chocolate factory tour they do most every Saturday and what a treat it was. I would consider the experience less a tour and more like an hour-long class in Chocolates 101. You get to handle and examine cacao pods, sample raw cacao nibs, and witness the entire process first-hand from bean to bar. After the hour we spent with the kind folks at the French Broad Chocolate Factory, we have a new appreciation for the intensely manual process of harvesting cacao and how important it is to support small businesses like them who work hard to foster relationships with cacao farmers and pay their workers a decent wage. I, for one, will no longer shudder at the price of a $7 bar of chocolate. 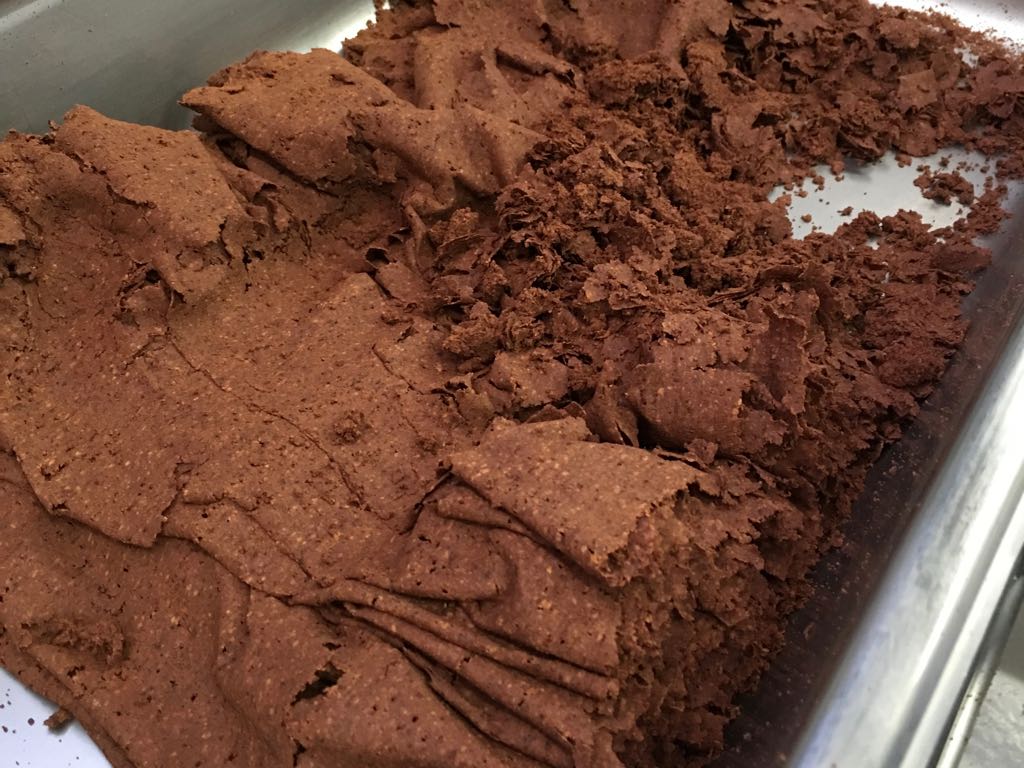 Cacao grinds after four passes through the rolling mill.

Once you've sampled your chocolates and bought as much as you can carry, you're only a half-block stroll to one of our favorite breweries in Asheville. We first encountered Burial Beer Company on Thanksgiving after sleuthing the internet for something to do on the holiday we would be spending away from family. The folks at Burial Beer announced they were hosting a community pot luck and mentioned they would be providing two fried turkeys, and that folks could bring whatever sides or treats they would like. We headed over early that evening with a batch of delicious pumpkin cupcakes that Jenn whipped up in the convection oven and found that there were many folks hoping for a bit of beer and a free turkey dinner. It was all quite tasty, but the beer was worth coming back for. 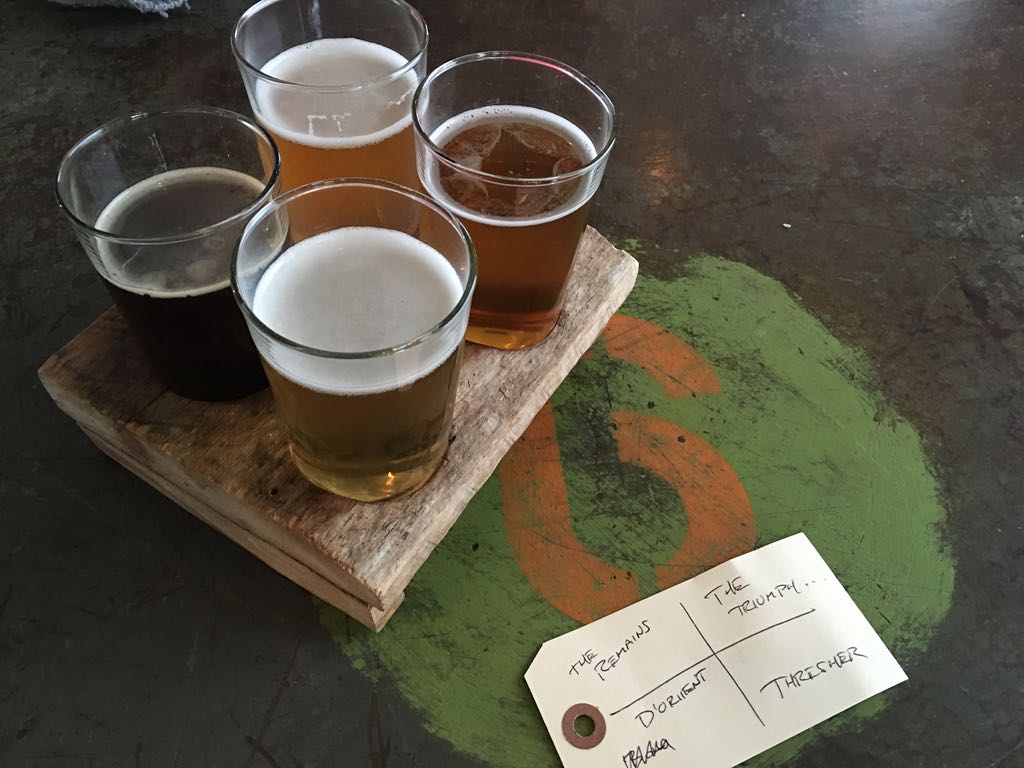 Definitely recommend going with a sampler at Burial Beer Co before settling into a glass of your favorite.

We returned the following week when there would be a bit more room to spread out and really sample some beers while we let Imogen run free and charm the other patrons. Their taproom is quite cozy and it's easy to find a spot, indoors or out, to get comfortable and enjoy some delicious beer. Given the name of the brewery, you can count on a clever tap list. My favorite went by none other than the name The Triumph of Death, a sumac saison in which 85 lbs of sumac are soaked in the beer post-fermentation. Jenn surprised herself with a preference for a brew by the name of Thresher, a French saison made with cold-pressed coffee of a sun-dried Ethiopian varietal sourced from a local roaster. Honestly, we can't wait to go back, cozy up by the fire pit, and get reacquainted with some deliciously creative brews. In the meantime, we can't recommend Burial Beer Company enough, even if you just want to hang out and admire all the Tom Selleck portraits. 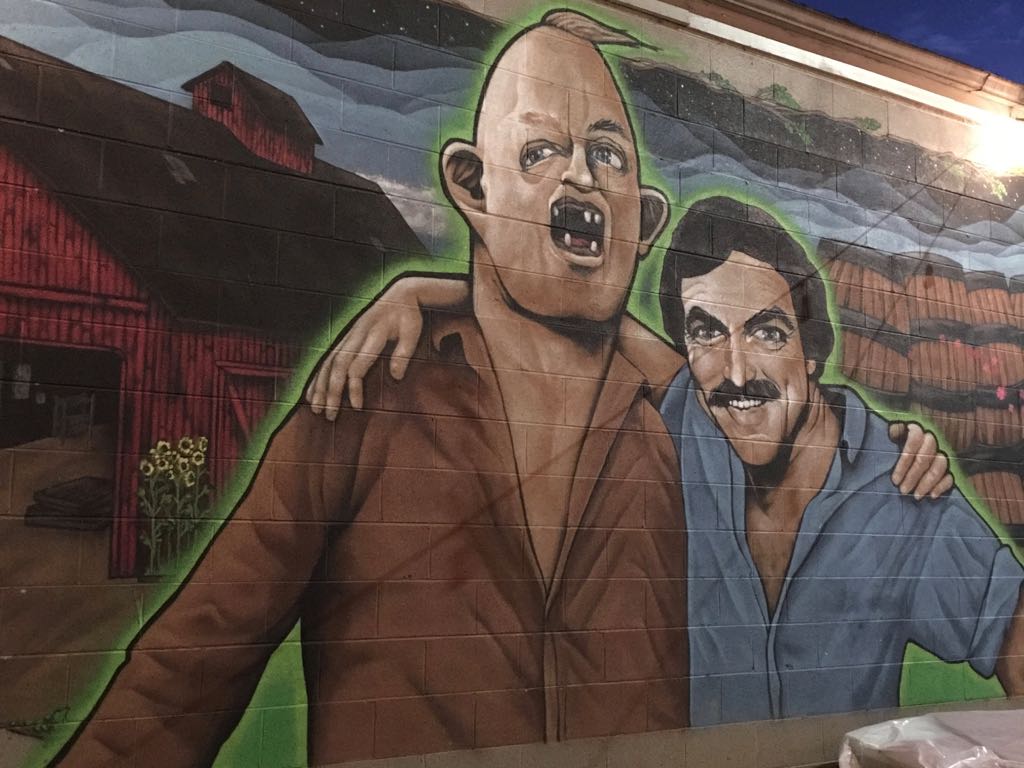 If you share in my fond memories of film and TV from the 80s, you'll know the two chaps featured in this epic patio mural at Burial. Sloth and Tom are featured in memorabilia throughout the brewery.

Honestly, there's so much to do in and around Asheville that our measly two weeks left us feeling a bit blue about having to leave so soon. I promise, we did more than just stuff our faces! Biltmore was stunning in its holiday grandeur, but I'd love to go back and take one of the tours that focuses on the behind-the-scenes lives of the people that lived and worked in the home. There's also the beautiful North Carolina Arboretum, stunning scenery along the Blue Ridge Parkway, and hundreds of hiking trails sprinkled about the region. We can't wait to return, and we will be blocking out a good portion of the calendar when we do. After all, with more breweries per capita than any other US city, it will take some time to give it a proper review. Cheers! 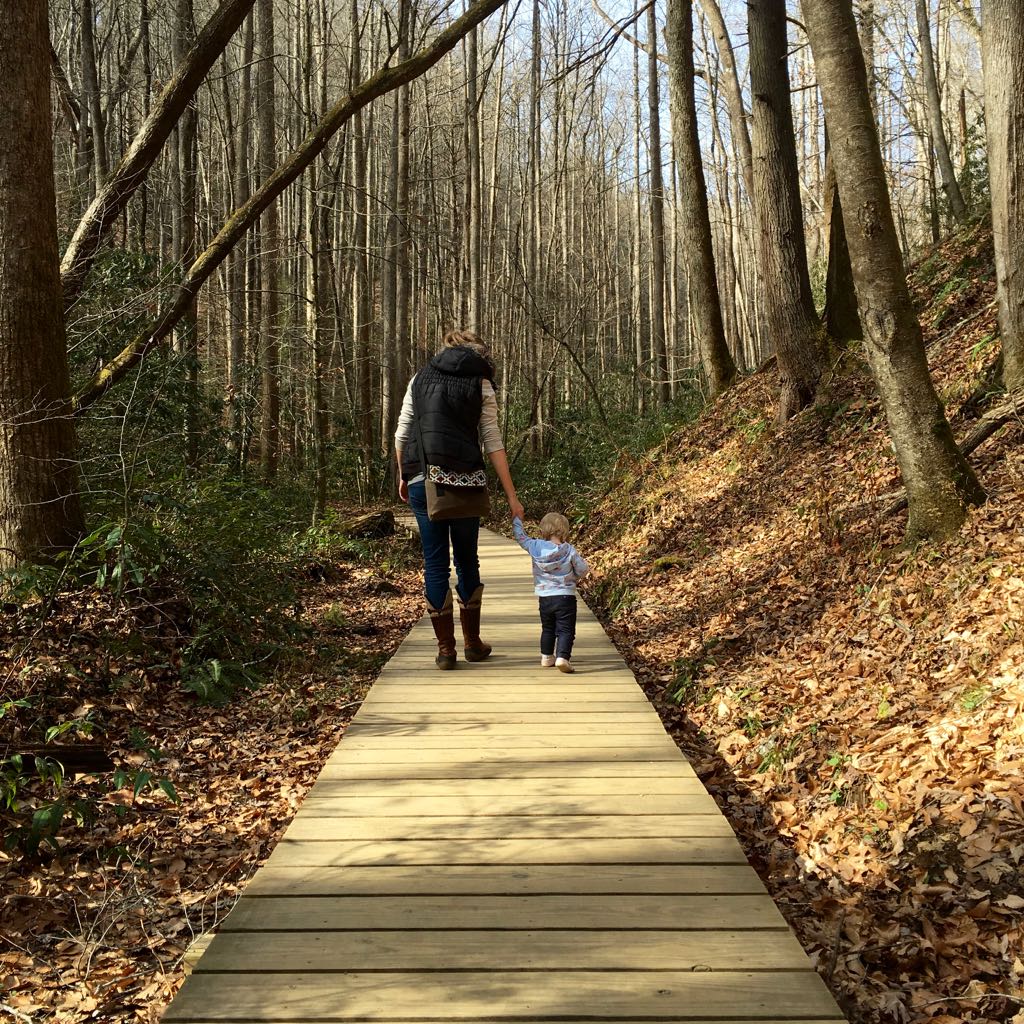 Jenn and Imogen on the path to Moore Cove Falls.