A Wednesday in New Orleans

We've come to like the relaxed sense of spin-the-bottle destiny that comes with RV travel. Deadlines are now less precise milestones that have been replaced by the gauzier notion of getting there. . . .sometime. But, there is something special about Wednesday's in New Orleans that compelled us to compress a cross country leap from Rockies spring training in Scottsdale to the Crescent City in three days.

And, I'll have you know, that's a stout sixteen hundred mile leap. In crossing into Texas just south of Las Cruces, New Mexico, and exiting the state to the east of Beaumont,Texas, we went from mile marker 1 on I-10 and then, like a marathoner, we thrust the chest of our Navion across an imagined state line boundary tape into Louisiana at mile marker 880. What a run. There should have been a band to celebrate.

There wasn't, but there was a band waiting for us later on. 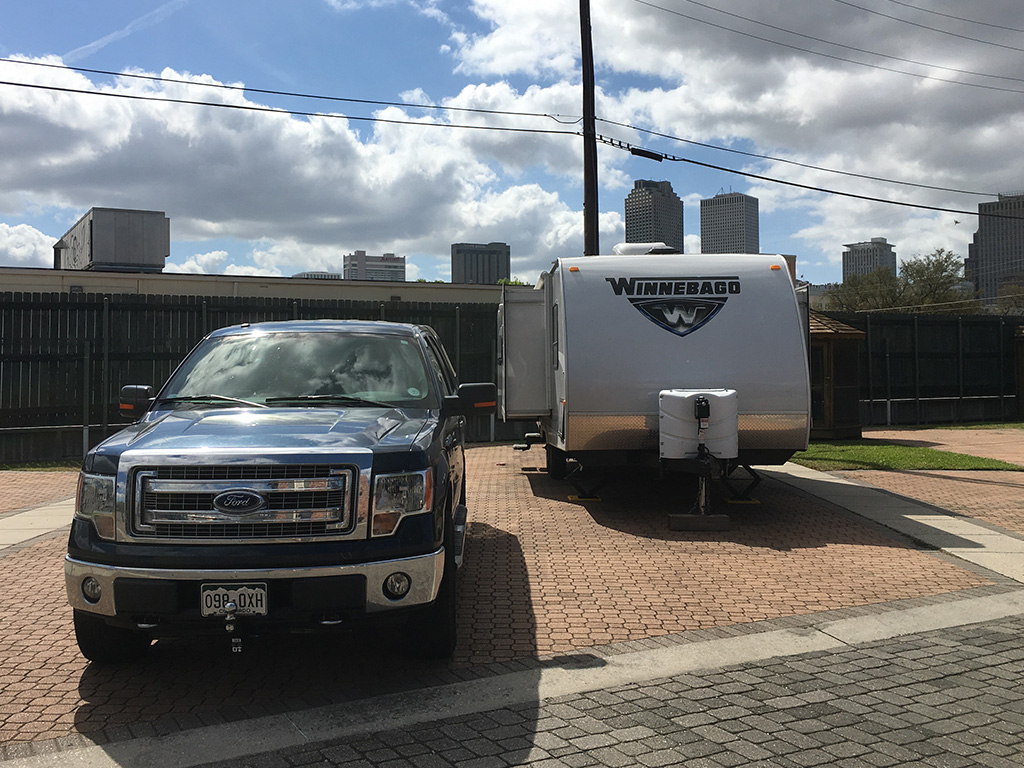 A Winnebago Towable fits right in at FQRV with downtown New Orleans in the background.

From an RV traveler's point of view, New Orleans offers something we wish more American cities had -- a downtown RV park. The French Quarter RV Resort's Big Easy slogan is "Let Us Hook You Up." As a successful example of post Katrina entrepreneurism, FQRV, with it's high cinderblock walls, topped with pigeon and anti-people razor-like spikes, along with a gated entry, is a well designed and maintained urban campground that accepts the smallest of towables which are mixed in with $1+ million dollar Prevosts and Newells along with every other type of RV in between.

Yes, there's freeway noise. Yes, there's frequent sirens. But, walk outside the gate and head east on St. Louis Street, past the police station (the area is quite safe -- but always use caution or a cab late at night), and in three blocks you're in the French Quarter. Skiers would say this location is at the base of the lift. It doesn't get much better.

Sure it's nearly under a freeway, but it's an excellent urban campground.

We've stayed at FQRV three times now and love its location. However, proximity has it's price and nightly rates are around $60 to $70. Not planning that far ahead we had to go with a premium space at $100. Not cheap, but we've paid more in the Florida Keys in high season. And compared to any of the downtown hotels which are mostly $200+ a night, the economics seem more favorable, especially when you can breakfast, still in your robe, sipping your favorite coffee, and not getting the credit card out to pay off a $40 dollar breakfast bill.

Over the past three years we've used FQRV as a jumping off point for walking and biking adventures. Biking around the town has it's charms, but New Orleans isn't a bike friendly city like Portland or Denver, so extra care, neck swiveling, and patience is warranted. 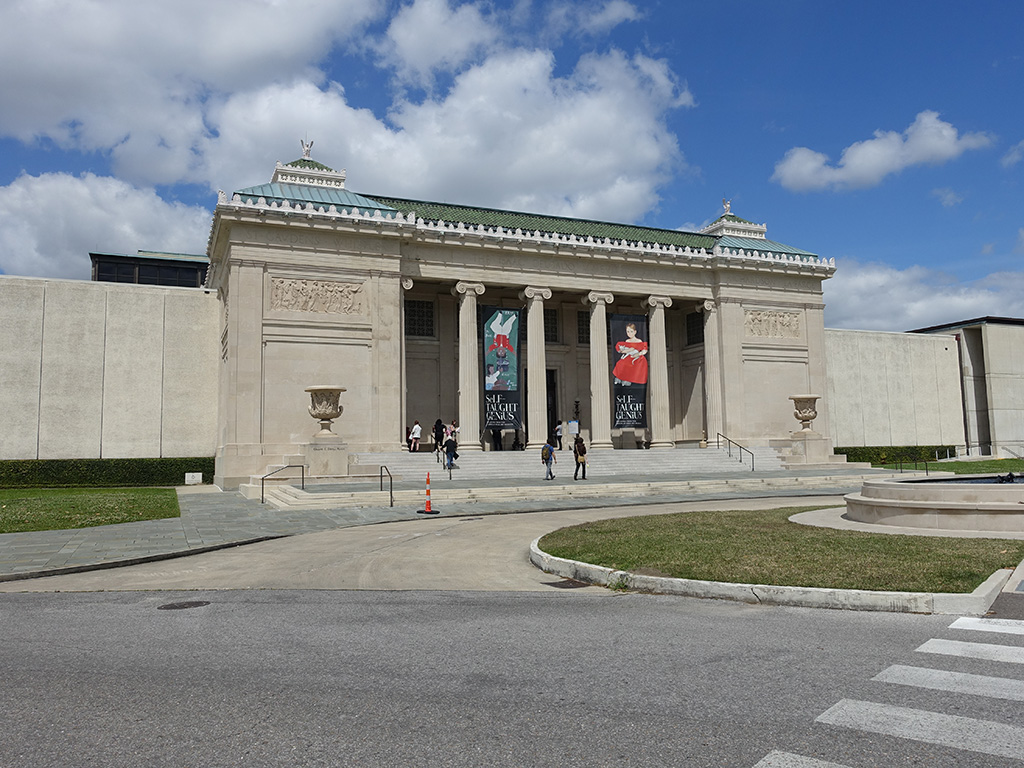 The New Orleans Museum of Art is one of many attractions in the sprawling City Park.

While we've visited many of the downtown sights on prior trips, we decided to walk two and a half miles in the opposite direction to visit New Orleans' city park and their art museum. We walked along the new Laffite Greenway which, now after going on foot, we can see that this would be a great and safe bike route. Clearly the greenway is a 2.6 mile corridor that follows an old canal and railroad right-of-way. It was part of many post-Katrina projects to revitalize and reconnect city neighborhoods.

We only barely explored New Orleans 1,800 acre City Park. It's huge and it's beautiful. A walk through the museum's outdoor sculpture garden (it's free) reveals an impressive collection of work by Rodin, Seurat, Saint Gaudens, and Moore. It all reflects some pretty impressive donor firepower for both the acquisitions and the gardens. 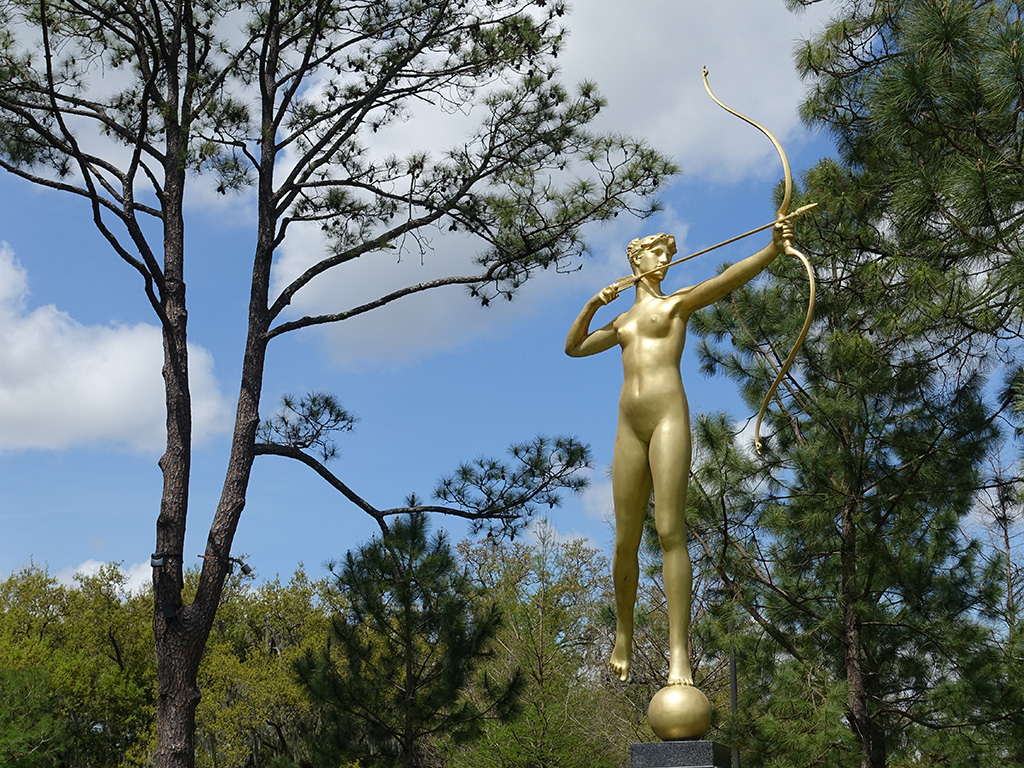 Diana beneath the pines. The Saint Gaudens sculpture is one of many premium works in a beautiful garden.

The museum itself is pleasantly small compared to major museums, but within it's galleries were a well curated survey of regional and international art. Often, in smaller museums like this, when you see a superstar name next to a work it's one of the more minor efforts. In the case of the New Orleans Museum of Art they checked the requisite "superstar boxes", but all with remarkably good works by Picasso, Manet, Renoir, Monet, Cassat, and a wonderfully impressive John Singer Sargent portrait. On our next visit we'll return on bikes and explore the park more deeply including their botanic gardens. 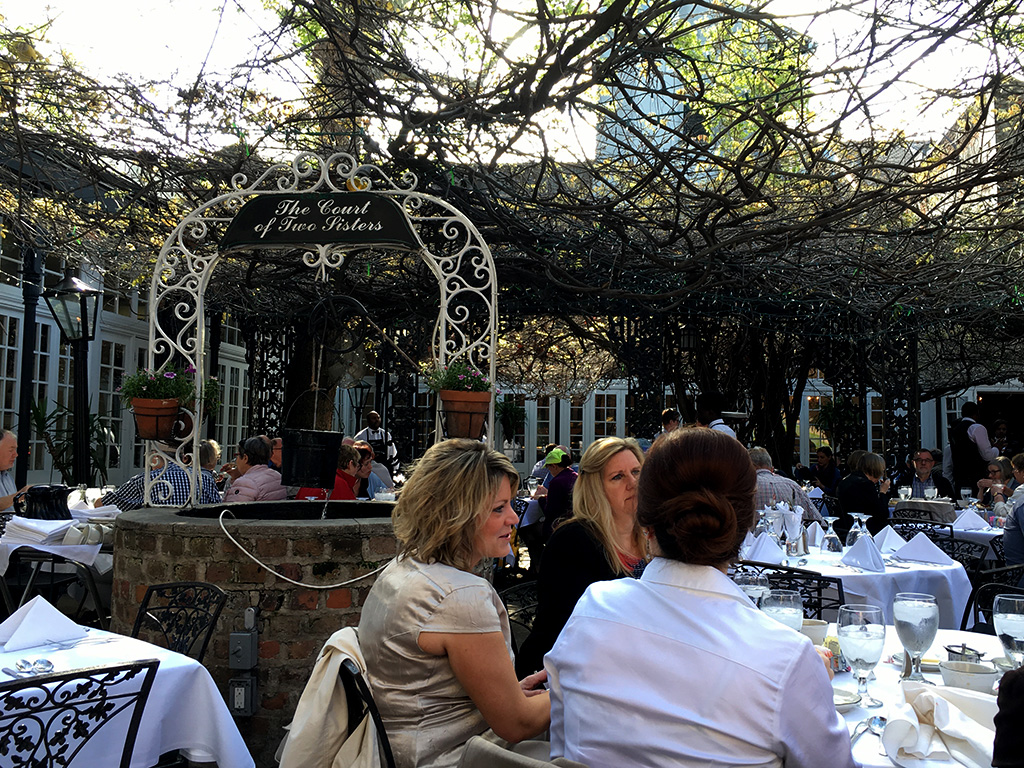 The Court of Two Sisters has a lovely daily jazz brunch.

We always like to criss-cross the quarter and one of our favorite streets is Royal which is a block beyond boozy, woozy Bourbon street. Royal has two great restaurants that we really have enjoyed. Especially in good weather consider making a reservation for the jazz brunch at The Court of Two Sisters (excellent buffet, $40 per person). You dine outside in a vine covered courtyard while listening to "ease into the day" soft jazz. For a special night out, we loved Doris Metropolitan which is just a couple blocks further north on Royal. It's a premium steakhouse (they do all their own aging and initial cooking of the meat is sous vide which, after being finished on the grill, offers great flavor and tenderness). The waitstaff whisks drinks, apps and entrees on and off the table with impeccable timing and near invisible intrusion. Owned by a group of Israeli partners, Doris has select hints of middle eastern seasonings and marvelous breads (dinner for two with one cocktail each and shared desert was $220). 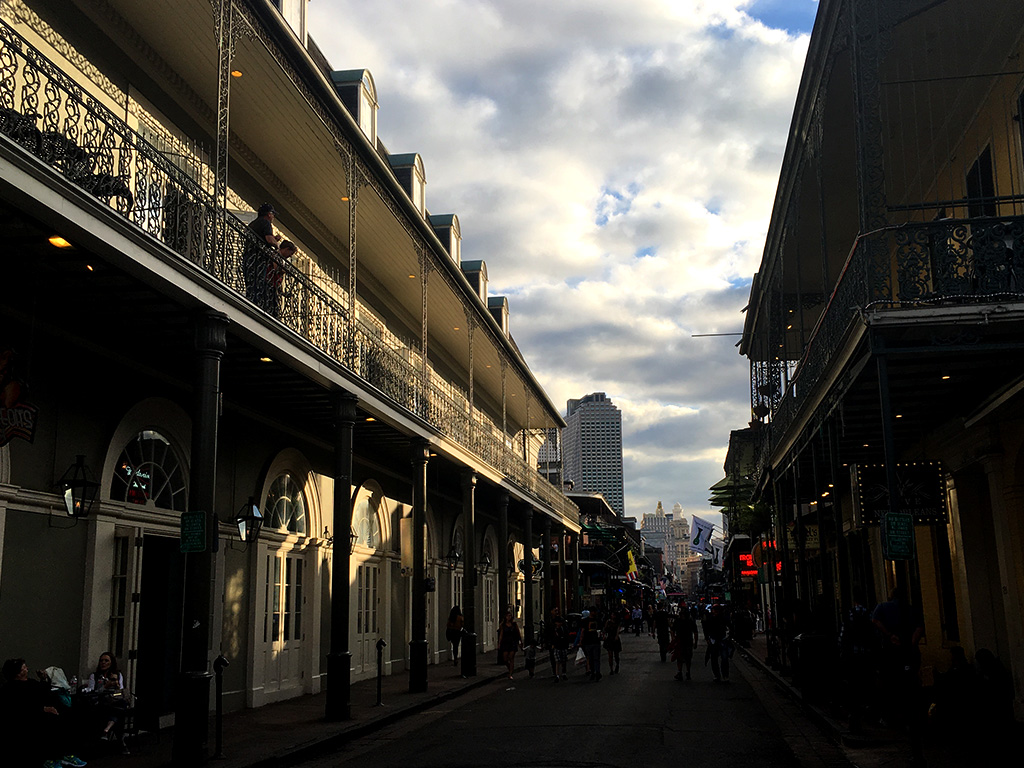 After a day of heavy rains to clean the streets, evening comes to the French Quarter.

So let's get back to Wednesday night. Why did we endure 880 miles of Texas freeway and then some? To settle into the small room at a New Orleans jazz institution - Snug Harbor. And specifically we came to listen to the fifteen fantastically talented men of the Uptown Jazz Orchestra hold forth for about an hour and fifteen minutes of aural wonder. The group is usually fronted by Delfayo Marsalis who's other more nationally visible brothers Wynton and Branford are part of New Orleans musical royalty. Their dad still plays once a week with a small combo at Snug. It's a high walled, compact room that holds around sixty guests sitting on hard backed chairs clustered around tiny cabaret tables. And mercifully, it's smoke-free. 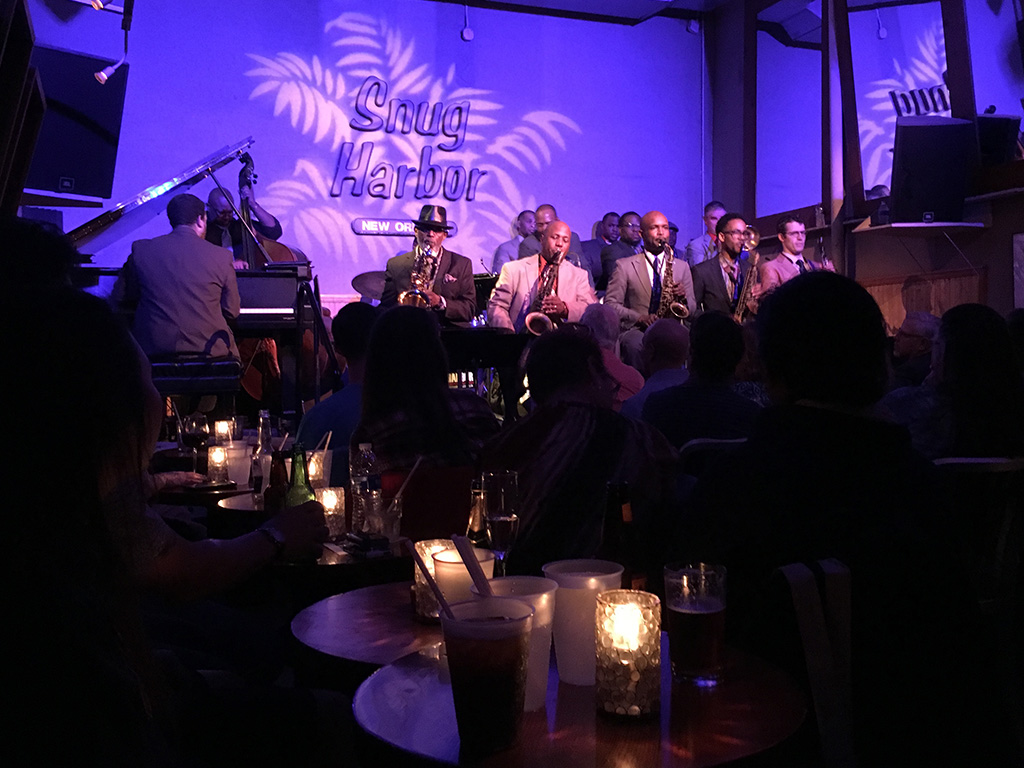 And all that jazz! It doesn't get any better than at Snug Harbor.

With arrangements from the likes of Duke Ellington, Cab Calloway, Charlie Mingus, the un-amped sound washes over, around and through you. The Count Basie arrangement of "All of Me" time machined us to the glory of the big band days when a wall of reedy sax harmonies vibrated your heart and flossed through your ears like warm velvet. The sound is divine and the real bonus of the performance is the affection, interaction and respect that all the musicians have for each other. You just can't fake having a good time like that.

And here's the really amazing thing about the Uptown Jazz Orchestra night. This was our third visit in three years. The first year was absolutely fantastic. The next year we knew what to expect and it still was fantastic. This third year we now considered ourselves seasoned vets and shared some of our backstory knowledge with a couple from Destin, Florida who had their two very polite, oxford shirted, teenaged sons with them (spring break). As is the tradition, the band walks though the door in the rear and took the stage playing. And the review for year number three? Just as exciting, magical and fantastic as the first time! And the Destin family loved it too.

At the end of their set the band walked out playing what's called a second line New Orleans march tune that was the theme to the HBO show "Treme." Treme is the name of one of the city's neighborhoods and the five year series told the story of post-Katrina New Orleans through the lives of its residents and its music. During one episode they featured the UJO on stage at Snug Harbor and I immediately made a note that we'd have to go. Now, for the third time, here we were again.

Travelers often read a book about where they're visiting to give them a deeper sense of appreciation and understanding. In a similar way, I highly commend the "Treme" series to you. Viewing it, we have come to see New Orleans as a richer, more vibrant, and much less intimidating travel destination. The city's gritty, beguiling charm and best-you-can-hear jazz has brought us back three years in a row and will keep us finger tapping while we go from mile marker 880 back to 1 and then head north to Colorado and home. True dat.