A Visit to the RV/MH Hall of Fame in Indiana

A Visit to the RV/MH Hall of Fame in Indiana
Why this unique museum in Elkhart, IN, is worth a stop!
By: Sue Ann Jaffarian 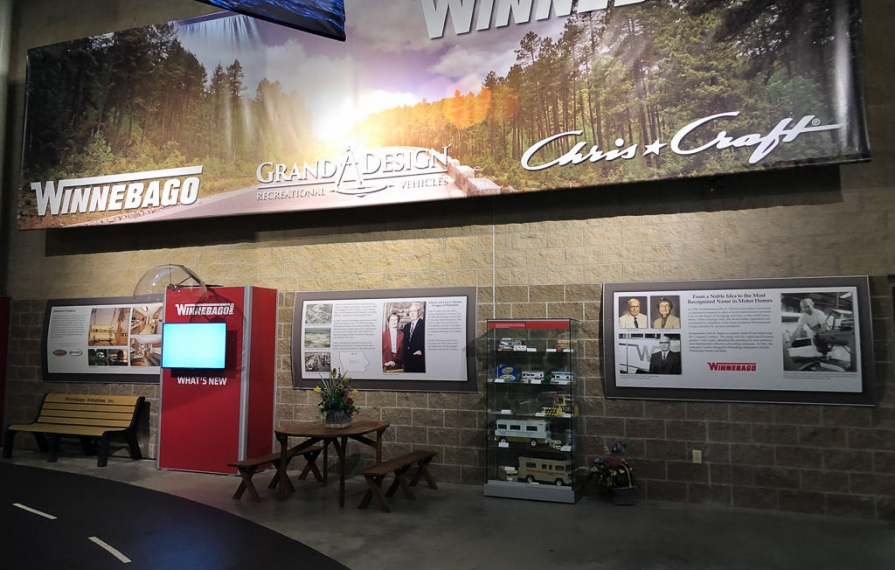 I freely admit that I'm a neophyte when it comes to RVs and RVing. Even though I've been living full-time in my Winnebago Travato for more than a year and a half, I have barely scratched the surface of what I still need to learn. So, when I stumbled upon the RV/MH Hall of Fame in Elkhart, IN, it was time to step up my education.

Staying Overnight at the Museum

I found this fascinating place while looking for a spot to hang my RV keys for the night. This museum is part of the Harvest Hosts program and sounded fascinating. Some of my favorite places to stay through this membership are museums, followed by farms. However, all RVers, not just Harvest Host members, can actually park overnight in the RV Hall of Fame lot. Just pull in and park somewhere on the edge and remember to visit the museum as a courtesy.

Attached to the museum is the Northern Indiana Events Center. The parking lot is humongous, with room for any size RV. I parked next to a pretty fountain by the events center. There must have been at least a half dozen assorted RVs already tucked in for the night. It was dark and extremely quiet.

In the morning, I moved my van closer to the entrance to the museum, which is around the back of the events center. It is one lovely building, and the front is actually the museum entrance, which faces a highway. There is a nice fountain there as well. 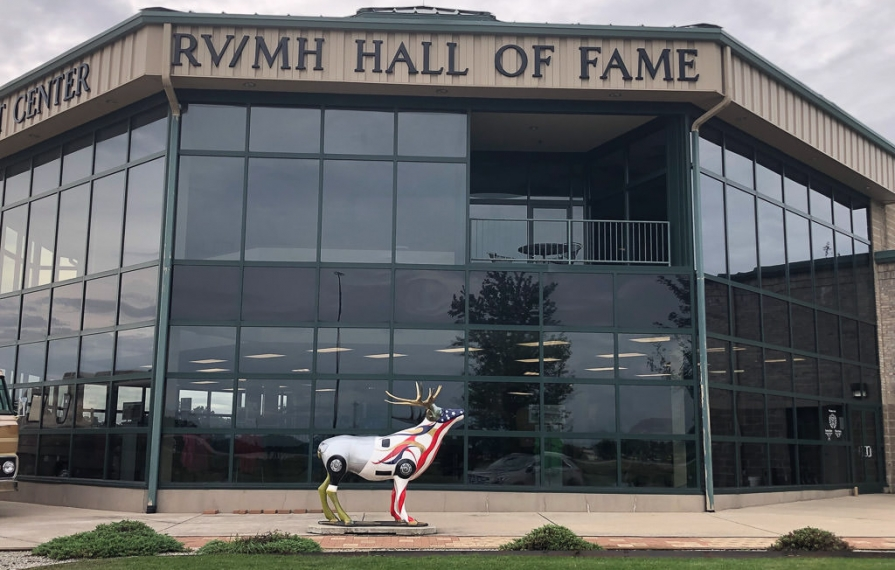 Visiting the RV/MH Hall of Fame

The cost to visit the RV/MH Hall of Fame is $12 for adults and $10 for seniors, and it is well worth it. Plan on spending a couple of hours here. By the way, 'MH' does not stand for motorhome, it stands for manufactured housing, which is also represented in the exhibits on the premises.

FACTOID: The manufactured housing industry grew out of the recreational vehicle industry. Did you know that? I didn't. See, we're learning stuff already.

When you enter the building, you are immediately in a large area that contains the gift shop, as well as the ticket counter. To the right is a John Deere covered wagon. Past that is where all the fun starts.

The RH/MH Hall of Fame is divided into several sections. On the first floor is a theatre showing a short but informational video on the industry, as well as the GoRVing Hall, Exhibitors Hall, and Founders Hall. Upstairs is a large comfortable library containing volumes on the industry's history, vehicles, vendors, etc. If you need to research anything about RVs, this is the place to go. Along the walls upstairs are photos of the founders and individuals inducted into the Hall of Fame. 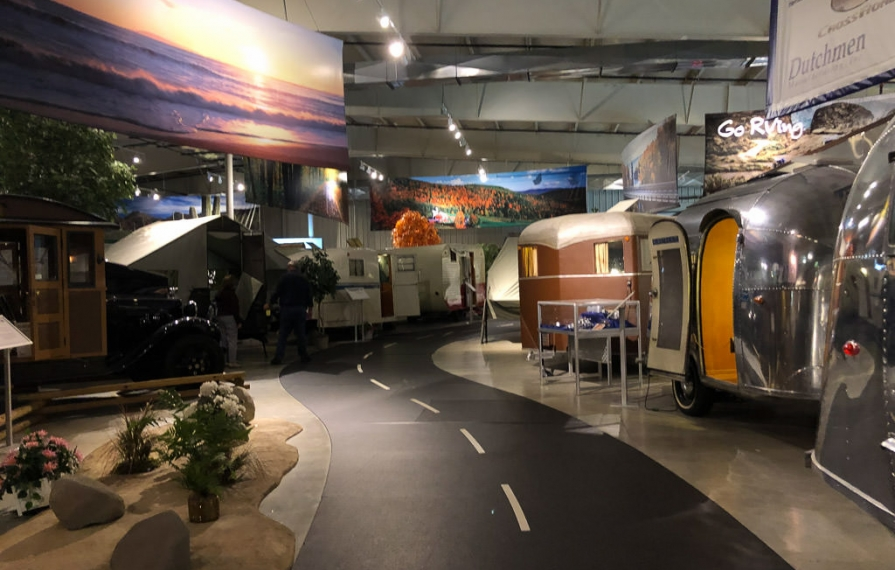 An Inside Look into the Hall of Fame

The RV/MH Hall of Fame is operated by the RV Heritage Foundation, Inc., a non-profit company. I had the privilege of interviewing Darryl Searer, the president of the foundation. He was very generous with his time and knowledge. He has been in the RV industry in one way or another for decades before being tapped to run the foundation and turn it around when it nearly closed. Now it is debt-free, supported by donations and income from the events center. In addition, many of the largest RV companies donated large amounts of money, including an extremely generous donation from Winnebago Industries.

FACTOID: Elkhart, IN, is considered the RV capital of the world. Approximately 80% of all RVs in North America are built there.

According to Mr. Searer, the RV/MH Hall of Fame has more than 20,000 visitors a year, with attendance increasing approximately 15% a year. When I asked him about the ongoing popularity of RVing, he said,

"The popularity of camping and RVs has always been a means to an end. That being, using your RV to pursue your passion away from home. Every time I give a tour of our museum, I look at the 1913 Earl Travel Trailer and then when we go through the new Winnebago in the GoRVing Hall it reminds me that the lifestyle is much the same as over 100 years ago, but the amenities today are much more convenient and entertaining and there are many more passions to seek."

The GoRVing Hall promotes RVing to the public, while the Exhibitors Hall shows products and services used by and offered to the RVing industry, such as Onan, Thetford, and Dometic.
My favorite exhibit was Founders Hall. Founders Hall artfully displays RVs and travel trailers throughout history. The displays are often set up in campsite arrangements and all have informational plaques. It would be impossible to tell you about all of the great vehicles on display. Some you can enter, but most are displayed to show their best features. Many have all original equipment and features. 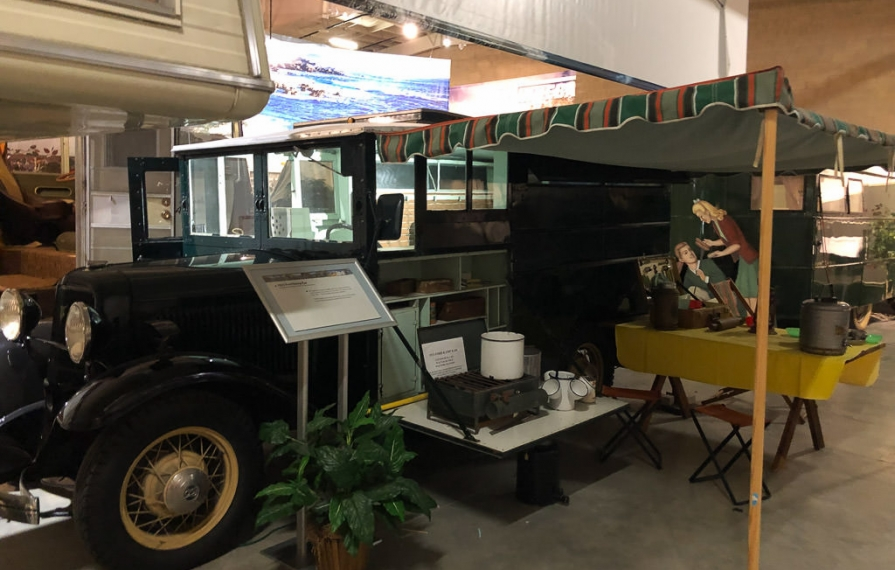 A few of my favorites were:

The final display, which was a 1967 Winnebago Motor Home built on a six-cylinder Ford chassis and was one of the first motorized RVs built by Winnebago. In addition to the display of the motorhome, Winnebago also has a large display about the company and a video talking about upcoming innovations in the industry. 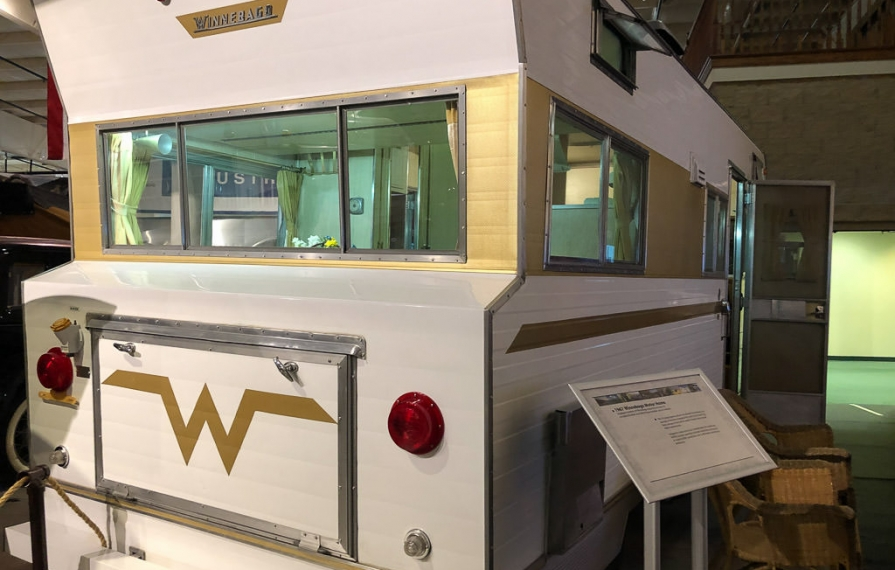 I love my Travato, but a visit to this place really gave me a greater appreciation of my van's long and celebrated heritage.