A Unique & Historic Side Trip from Maine: Campobello Island

The rocky, wild coastline of the North Atlantic with its incredible tidal changes, beautiful maritime forests and bogs, picturesque lighthouses perched on granite rocks, and fog blanketing the landscape. It all make for a great place to camp with your Winnebago.

Located on the Bay of Fundy in New Brunswick, Canada, Campobello Island is only 15 square miles and less than nine miles in length. But it boasts rocky seascapes and unique landscapes, in addition to playing an important role in American history. Campobello contains the only International Park, with the United States and Canada sharing its management and operational costs.

The only way to travel to this island is by crossing the Roosevelt International Bridge from Lubec, Maine (the easternmost town in the U.S.). However, the island is across the Canadian border in New Brunswick, so have your passport available. 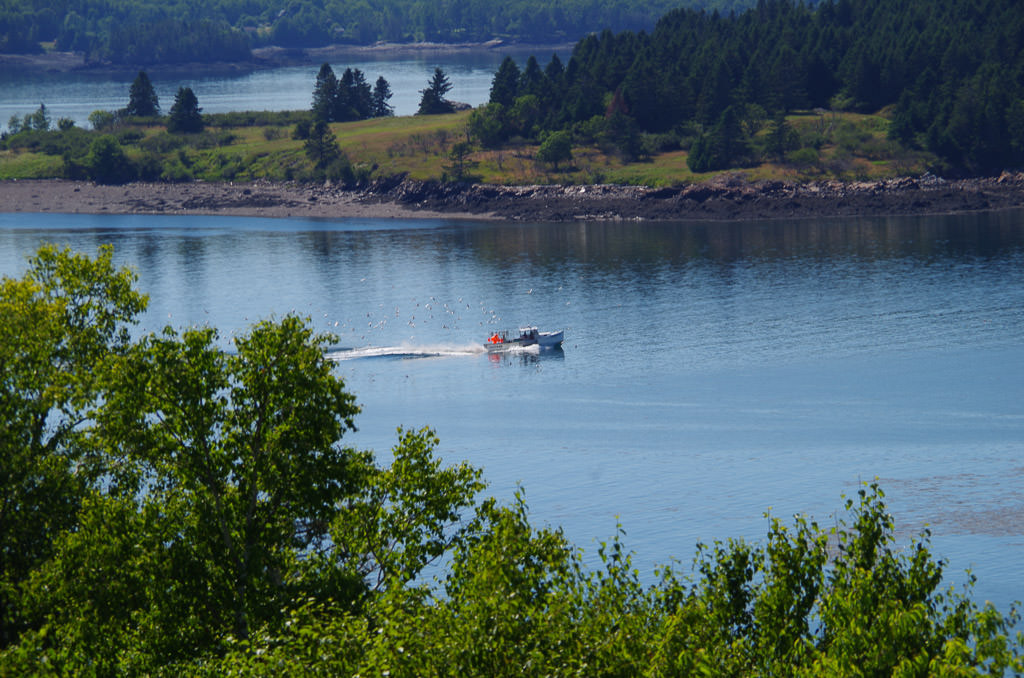 First stop on the island should be at the International Park's Visitor Center. It's here that you'll learn its history as the special summer place that served generations of Roosevelts. In 1881, a group of New York and Boston businessmen purchased most of the island with their plans to market Campobello as a summer resort. Three large hotels were built, and lots were sold for summer homes. In 1885, the parents of President Franklin Roosevelt, James & Sara, moved into their cottage. Franklin spent almost every summer at the island from the age of one. After marrying, he brought Eleanor, and later their children until he was stricken with polio in 1921. The 34-room cottage that they purchased in 1909 for their family visits is now maintained as a museum and available daily for tours. 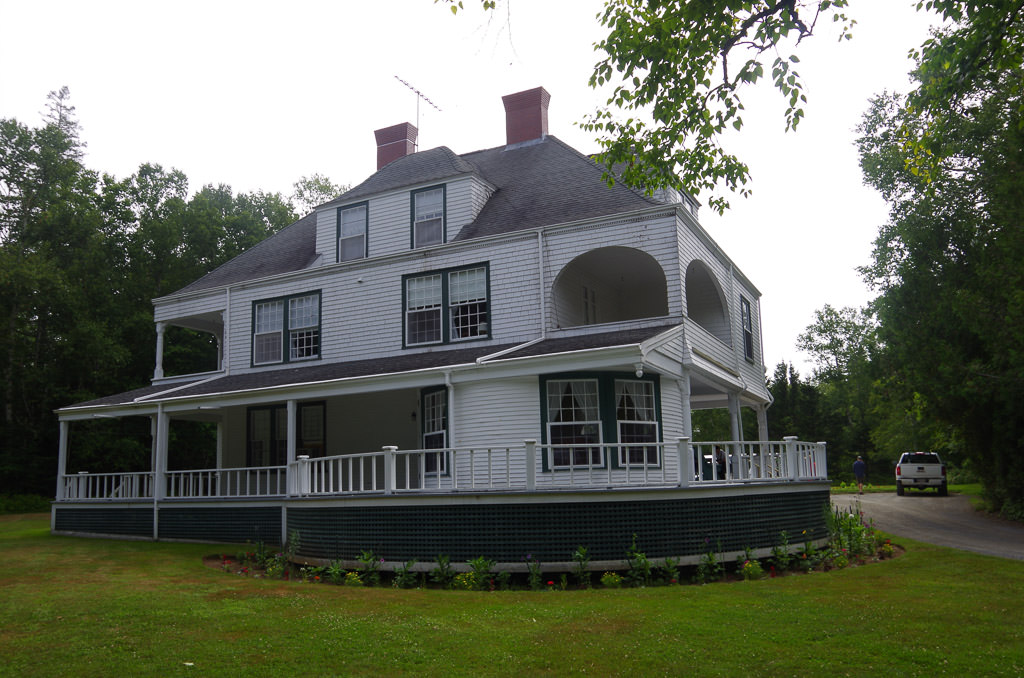 Through the 17-minute video at the Visitor Center, the historical displays, and the cottage, you can see how FDR developed his love for nature through island hiking expeditions, sailing in the Bay, carriage rides on the eight miles of trails (now great for biking or driving) and other outdoor activities. The Roosevelt history continued with three more visits by FDR in 1933, 1936, and 1939. Eleanor continued to come to Campobello following FDRs death.

While we toured the International Park, we were able to participate in their "Tea with Eleanor" program: tea and cookies with an inspirational one-hour talk on Eleanor Roosevelt, her life and spirit. Another day, we sat on the lawn and listened to a Celtic harp concert, performed by 12 harpists on the porch of the nearby Wells-Shober Cottage overlooking the bay. 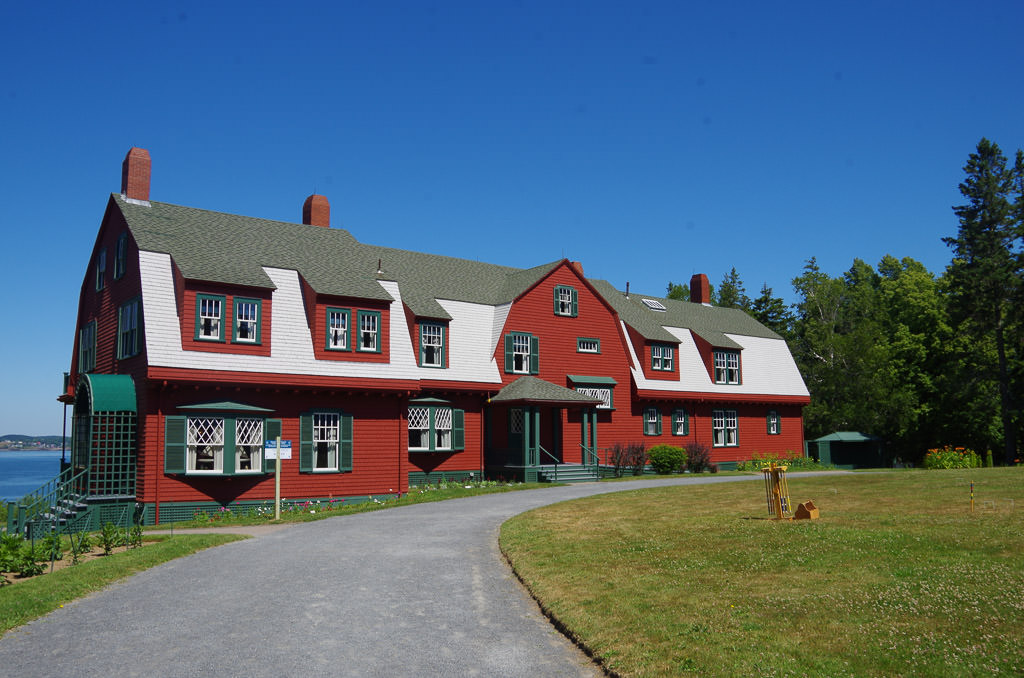 In addition to the Roosevelt legacy, there is much more to explore. With the island situated on the Bay of Fundy, it is amazing to watch the tides change by 28 feet! The morning fog, and the rugged rocky shores added to the feel of the island. Short walks (or a short drive) from the Visitor Center affords vistas of the other islands in the area, and incredible sunsets. With the ocean at hand, great seafood including lobster, scallops, mussels, and "fish of the day", made for some great eating.

Where to Camp, Hike & Bike

We camped at Herring Cove Provincial Park where there are 88 campsites, many with electric hookups, nearby water, modern bathrooms, and showers. Many of the hiking trails which meander through the maritime forests and bogs leave from the campground. 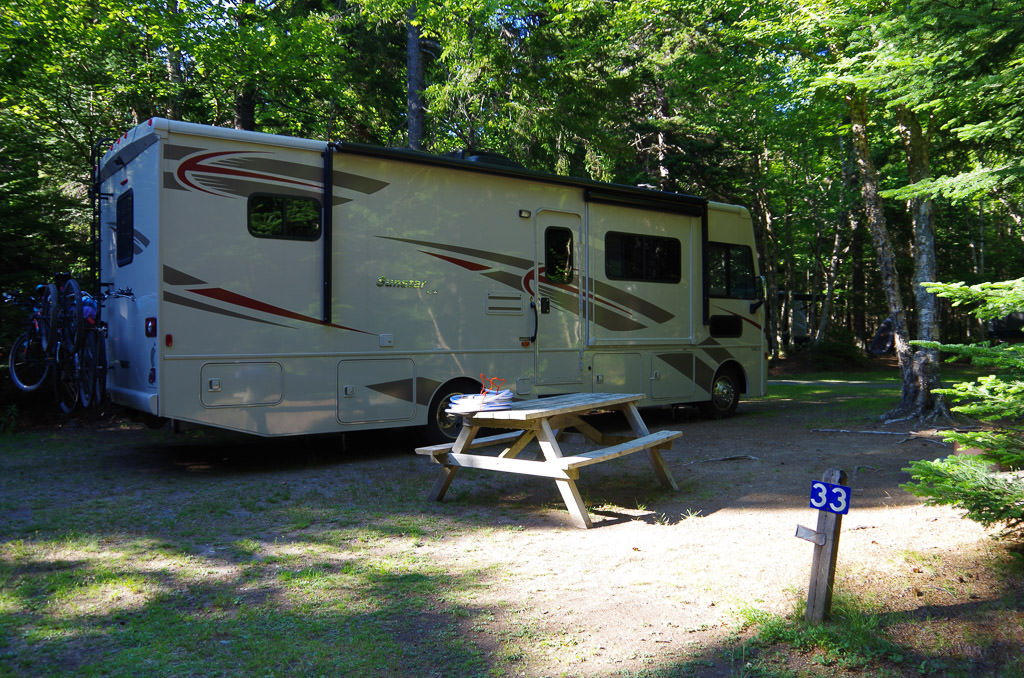 All the trails were well marked with both directional signs and blazes. We hiked a little over a mile from our campsite to the Visitor Center, through the forest and across wooden bridges spanning some of the bogs. Other trails led along the rugged rocky coast. When you're done with hiking, check out the nine-hole public golf course contained within the Park.

There are also over eight miles of carriage paths which are well maintained for bike riding. We rode many of these paths, although during the day we chose, we missed the coastal views due to the fog. It was all very experiential with the sound of the crashing waves and the fog horns in the distance. 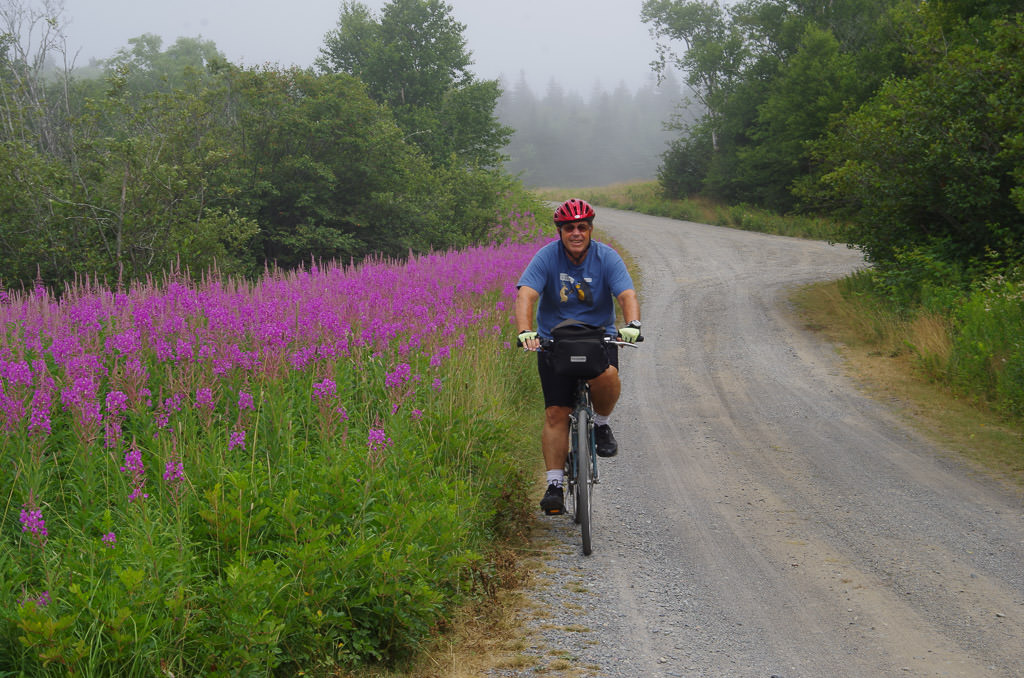 On one of the beautiful sunny days, we drove to the far eastern end of the island to Head Harbor Light Station at Wilsons Beach. It's important to arrive at low tide, as we did, so you can hike out to the lighthouse across the tidal pools. Warning signs are posted to be aware of the tides as you could be stuck for several hours if you spend too much time at this picturesque spit of land. Rest assured, there are staff to give ample warning of when you need to return to your starting point. 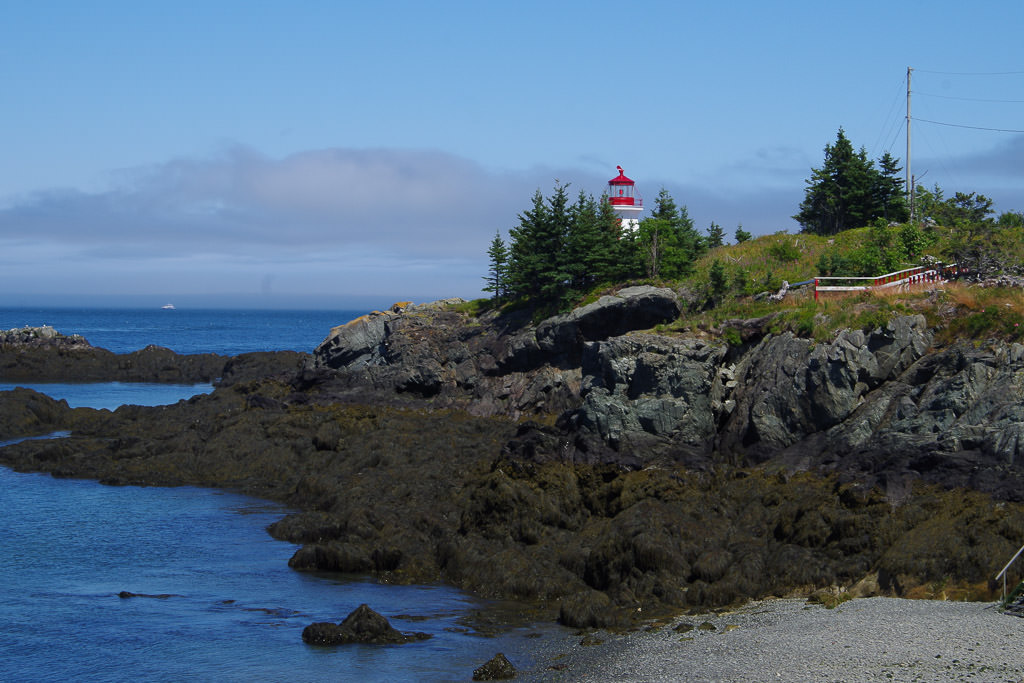 After arriving at the lighthouse, quite a site, we looked out across the Atlantic Ocean. First, we saw a number of whale-watching tourist boats (several commercial whale-watching boats operate from the island), and then we saw the spouts and the whales surfacing. Fin whales, humpbacks ... so close and so easy to spot even without binoculars. What a thrilling experience!

Other Helpful Tips for Visiting

Since Campobello is a small island with less than 1,000 full-time residents, plan to bring supplies and fuel with you. There is a small market for basic foodstuffs, but not much else. The campground boasts a nice playground, volleyball and basketball courts (with balls provided), a ring toss game, and sandbox. There is even a laundry (although the washing machine was out of order during our visit). 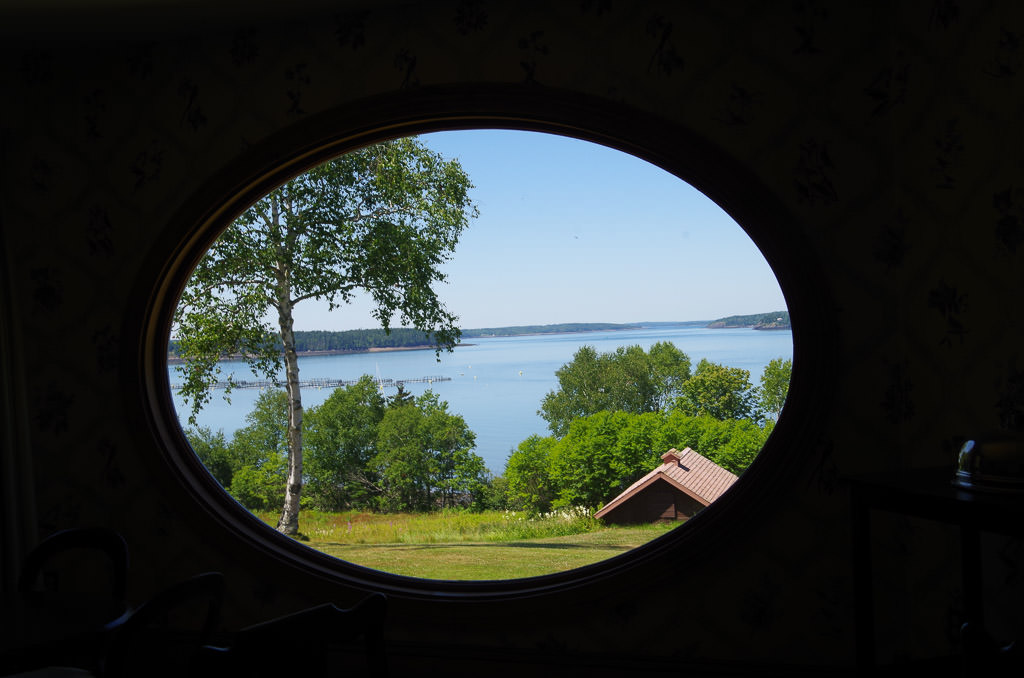 This island celebrates a wonderful coastal environment which we enjoyed during our six-day visit. Our allotted time allowed for us to explore, but also to relax and enjoy this maritime environment.