With all the lessons learned from our rookie trip under our belts, it was time to load the Travato for what would be a three week road trip to the Outdoor Retailer trade show in Salt Lake City. The plan was to leave our home and factory in Tennessee, head North through the Dakotas, across to Montana, down through Wyoming, and on to Utah for a week at the show. After the show we'd head South, clipping Colorado on our way to New Mexico, then across Texas, Oklahoma and Arkansas before getting back home. We'd be paddling and fishing and sightseeing along the way. Cargo -- kayaks, coolers, fly fishing gear, camping gear, Tripper gear, food, clothes, camera gear, laptops, one dachshund, and one wife. Before the trip, knowing we'd likely be ending up in some pretty remote regions, we added a Yakima LoadWarrior to the factory Fiamma rack system, carrying an extra spare tire. 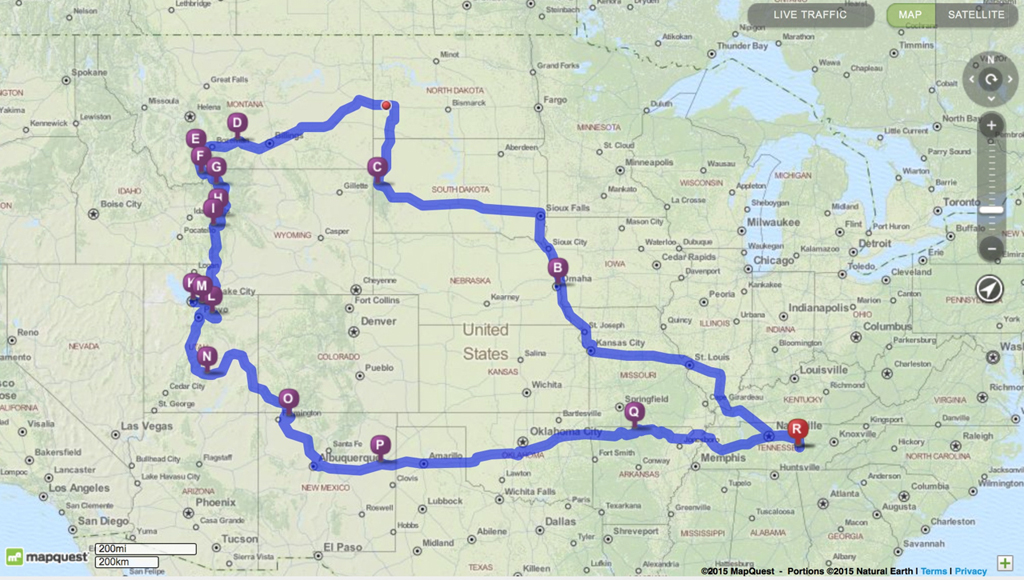 Our goal on day one, Saturday, was to get somewhere in the vicinity of Omaha, NE, roughly 16 hours away. The drive went fairly smoothly and on schedule, until the afternoon thunderstorms and tornado warnings started firing up around Kansas City. We dodged them and pulled into a KOA North of Omaha under calm skies, luckily landing the last available site. What was meant to be a restful night in the Travato changed around 2AM when emergency warnings started popping up on our phones, and when I pulled up the radar, it was obvious why. A massive storm front was almost on us, but as it moved in and passed, we were glad all the trees and branches above us didn't add to our roof rack cargo. 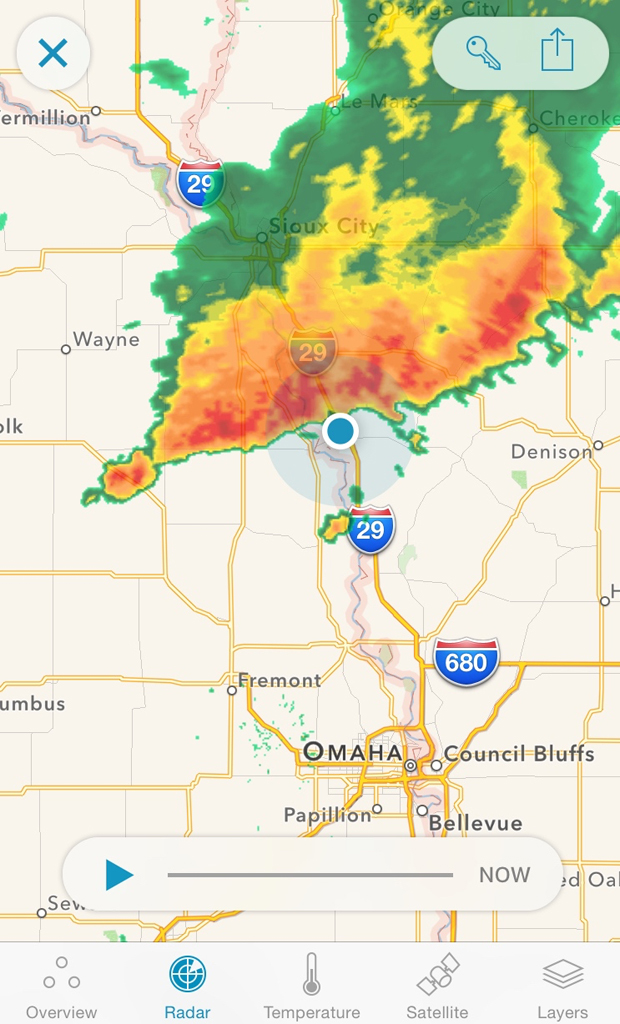 Sunday morning we awoke to clear skies, and made our way North to South Dakota, and West across it to our first trip destination, Badlands National Park. We only had time for a scenic drive through the park on the Highway 240 Loop Road, but it's well worth it. Grasslands quickly give way to very rugged canyons and unique geography, and one of the richest fossil beds in the world. There's a nice fossil exhibit in the visitors center, and an open lab where you can watch technicians restore fossils found in the park. As a hunter who loves to target wild boar, I was fond of 'The Big Pig' that used to roam the area. 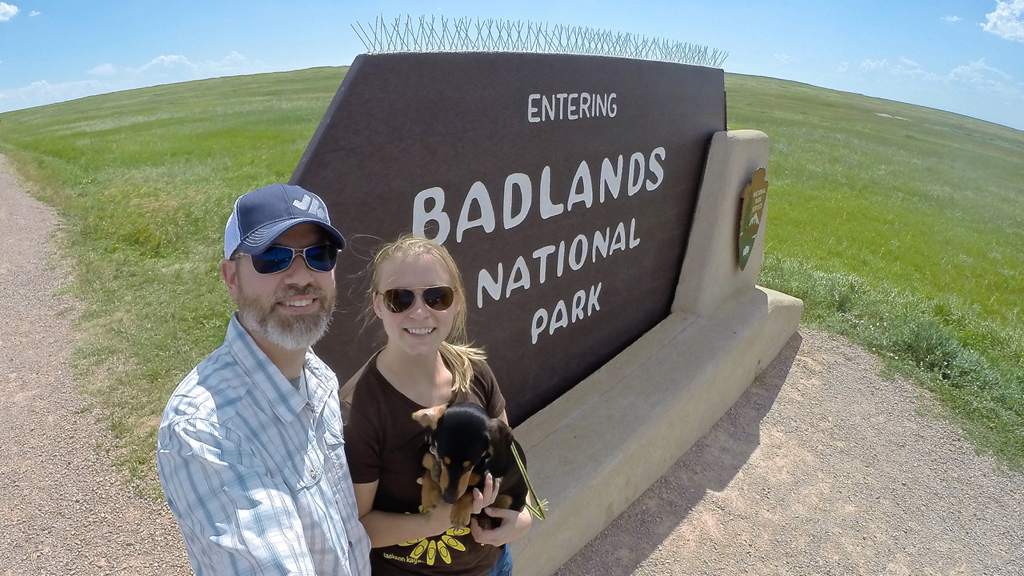 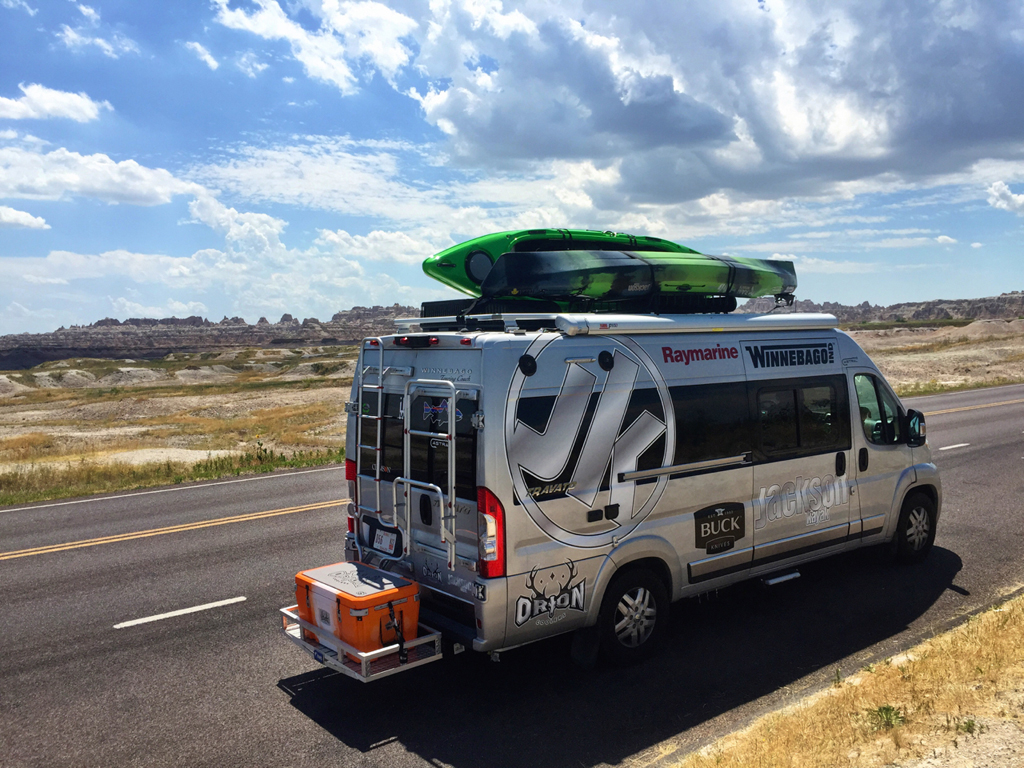 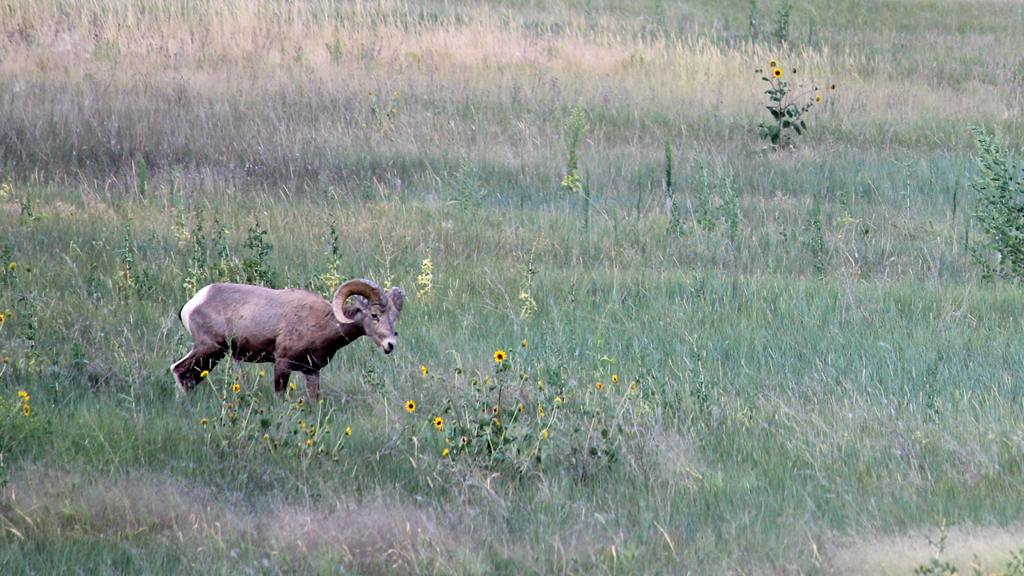 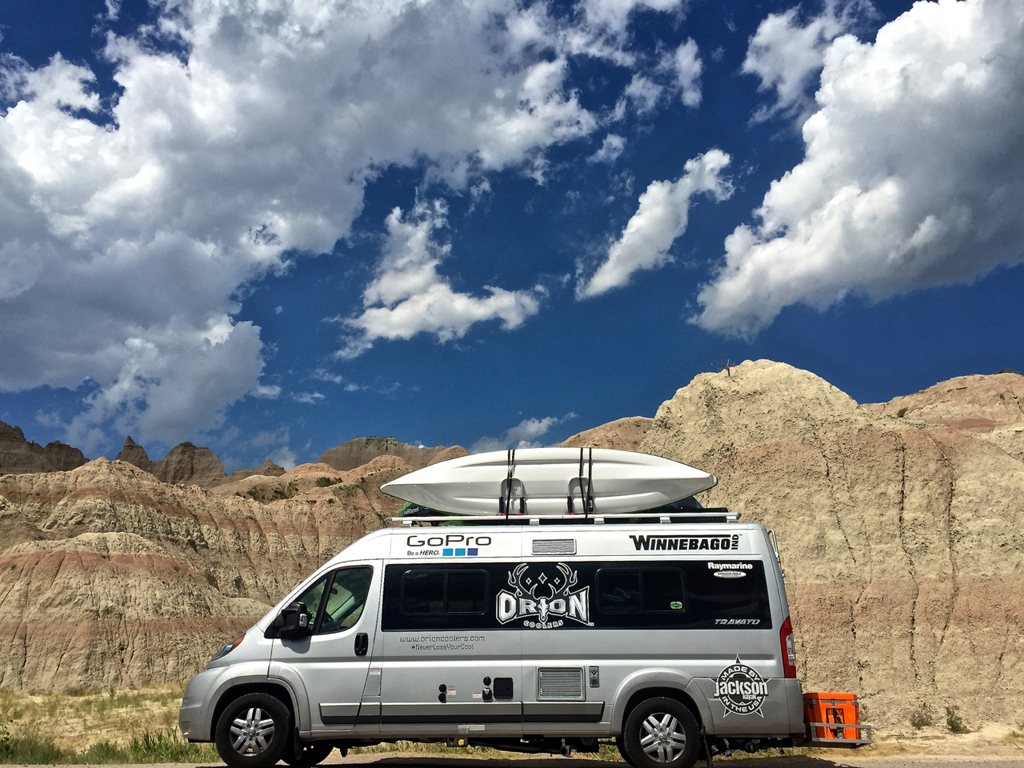 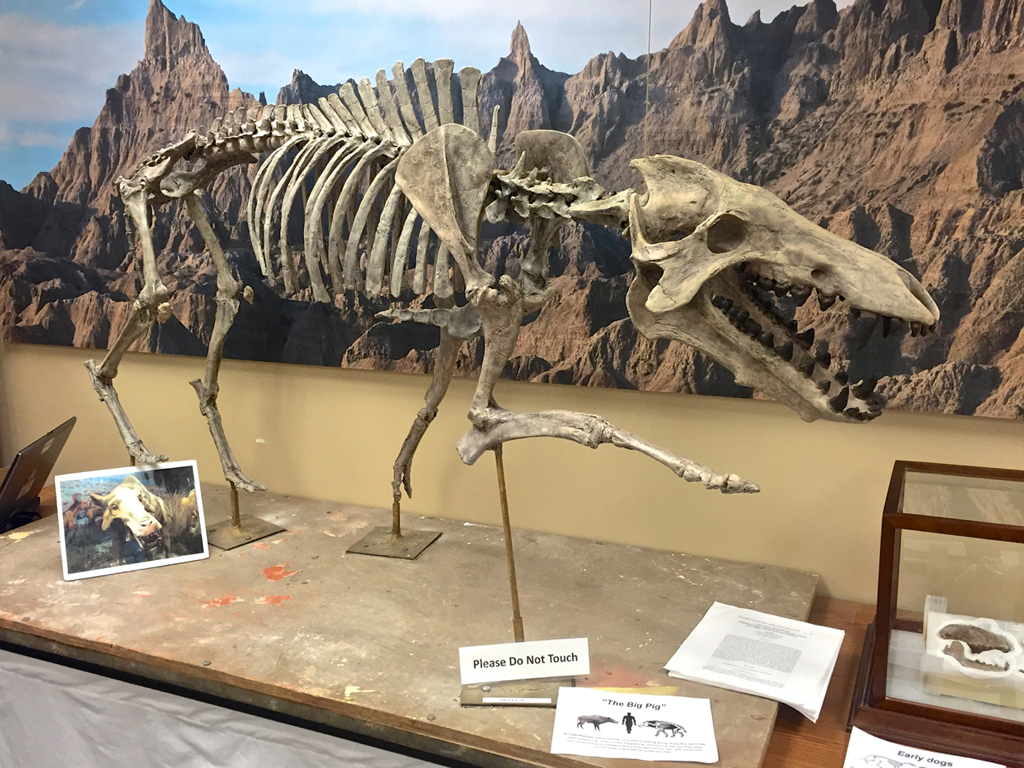 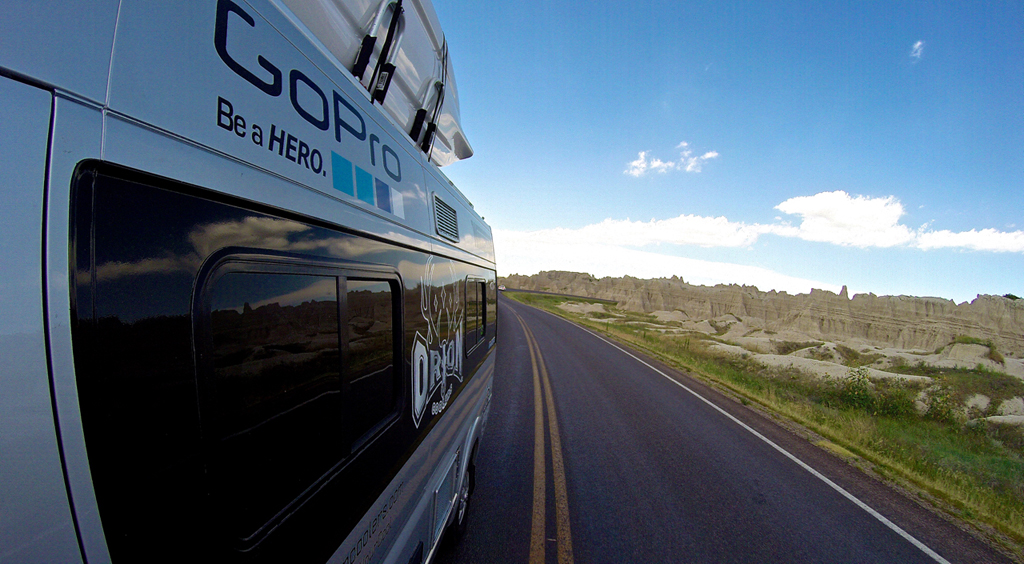 From Badlands it was just a few more hours to Mount Rushmore, another highlight of the Black Hills region. We didn't spend much time there since dogs aren't allowed and we wanted to continue on our way, but it's certainly a site worth visiting. By evening, we were pulling into another KOA, this one in Spearfish, SD. They even stock 'Rushmore White' table wine in the office, which seemed well suited to our Travato table for the evening as we discussed plans for the next day. 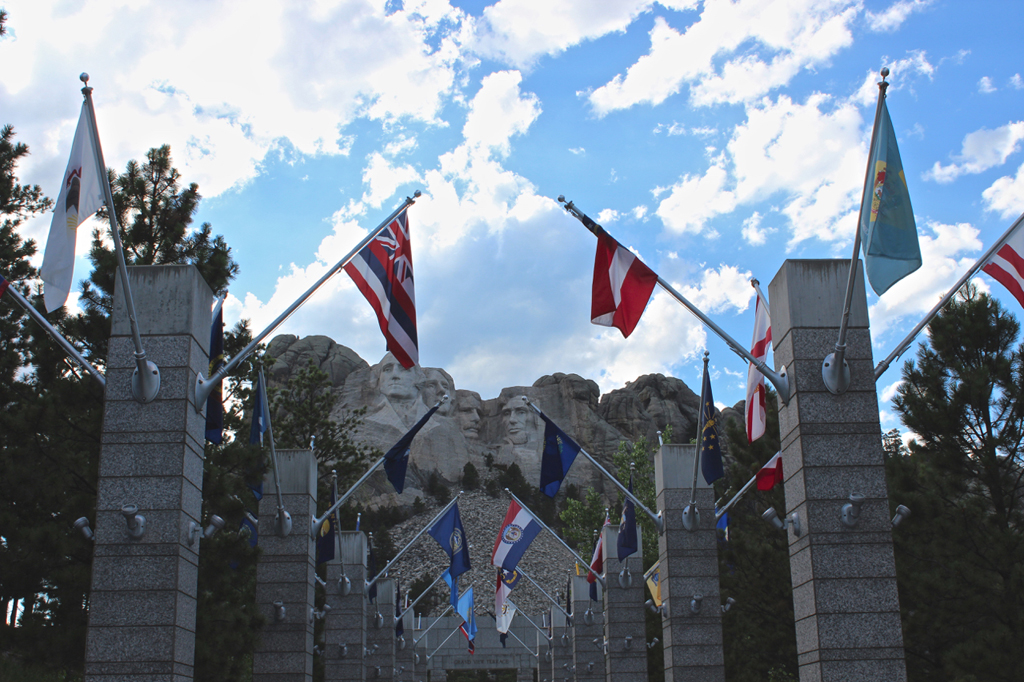 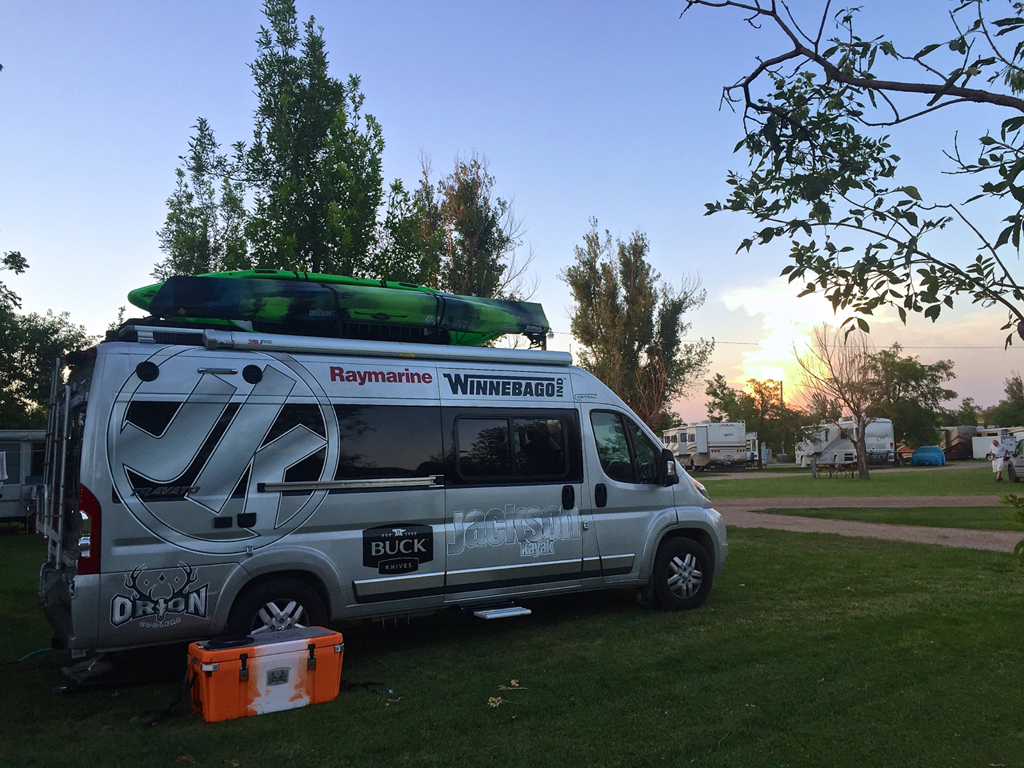 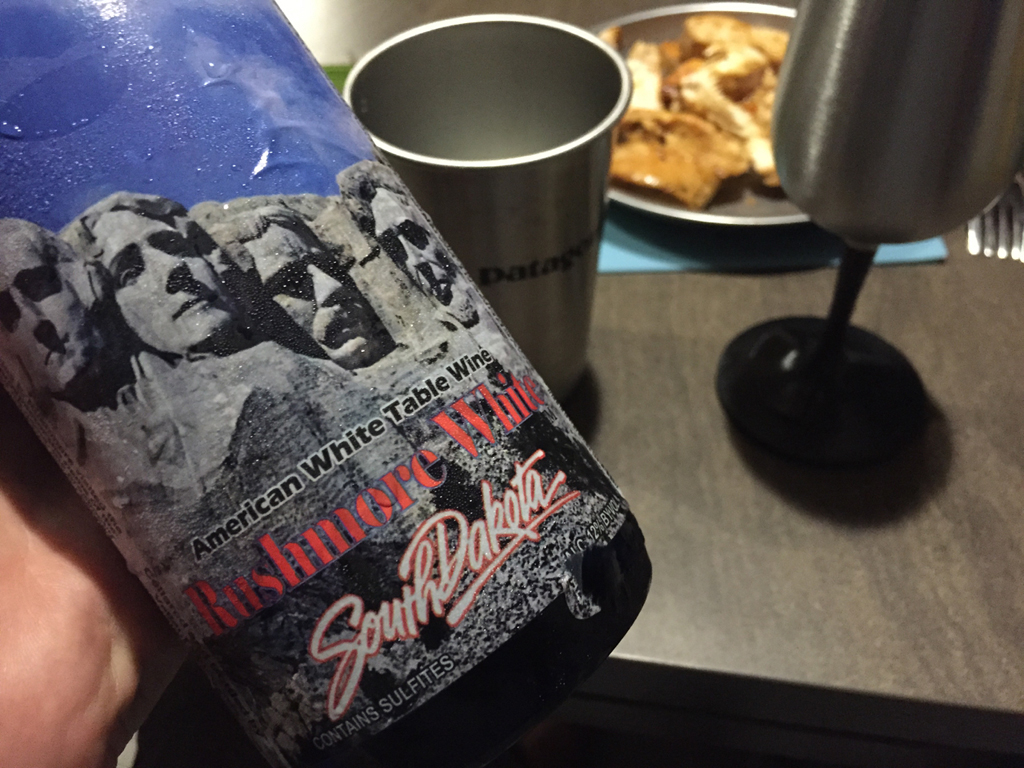 Originally, I wanted to head over from Spearfish to a river in Wyoming to do some kayak fishing, but with very heavy winds (40 mph+) in the forecast, that was becoming less appealing. There would be more rivers, and luckily we had a backup, and the flexibility of an RV. The backup plan would add another new national park for us, and also be my 49th state visited -- North Dakota. 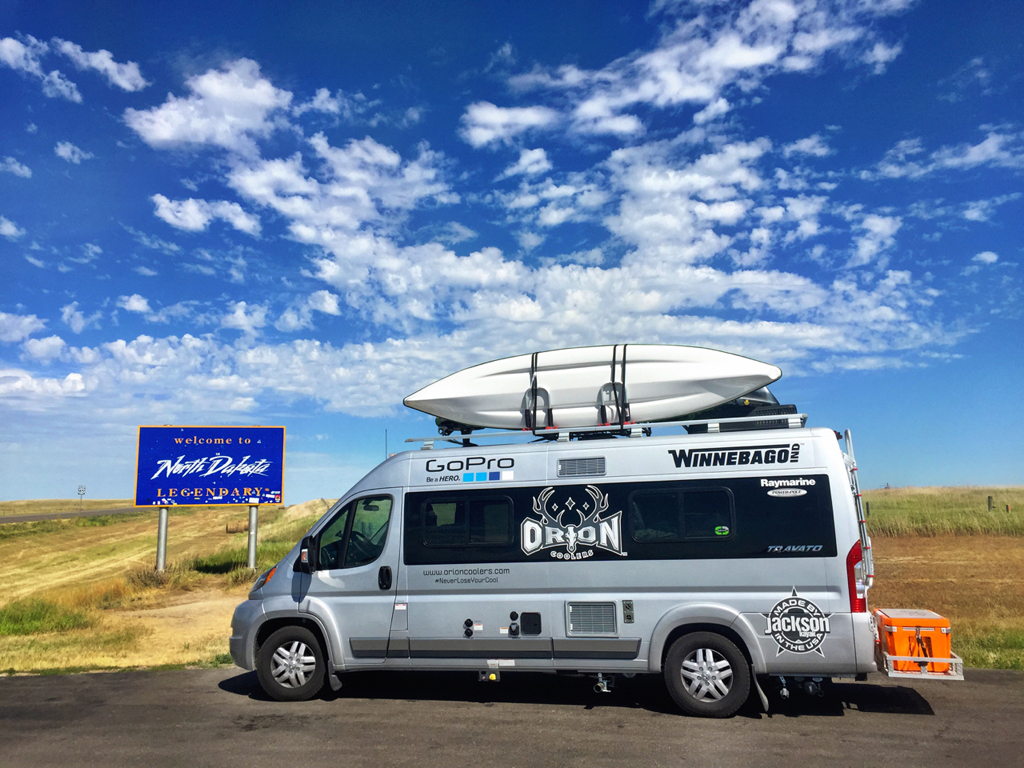 By mid morning, #49 was officially on the list, and we were in North Dakota, on our way to Theodore Roosevelt National Park. Being so instrumental in the whole park system existing in the first place, it was cool to visit his namesake park. He first went there is 1883 to hunt bison, and his time there helped form his general conservation mindset that would eventually result in the National Park Service. Wild bison can still be found there today, and wildlife as a whole is plentiful. We did the Scenic Loop Drive in the South Unit, and saw wild horses, prairie dogs, and most definitely bison -- lots of them, and some up close and very personal, feeding within feet of the main road. 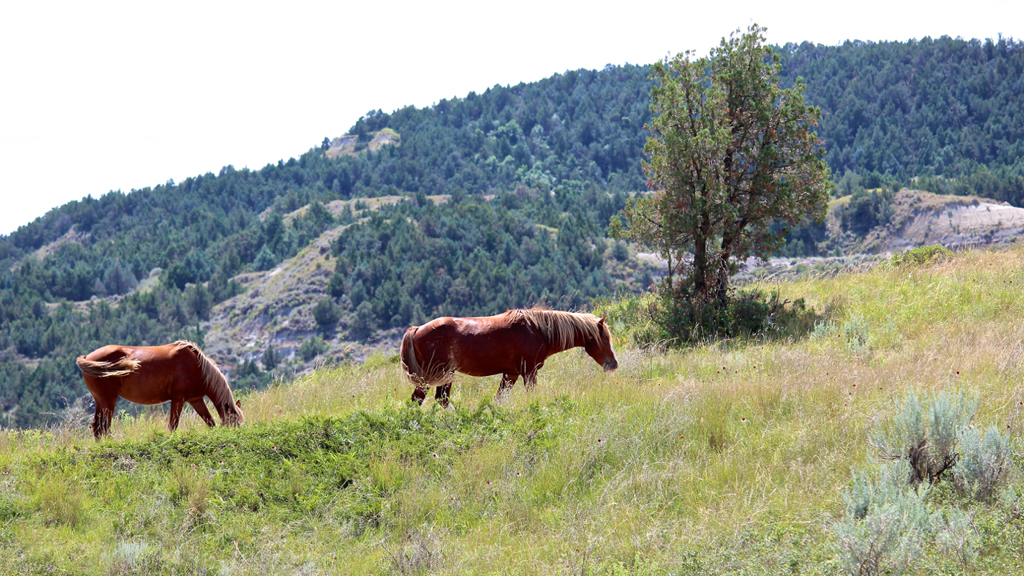 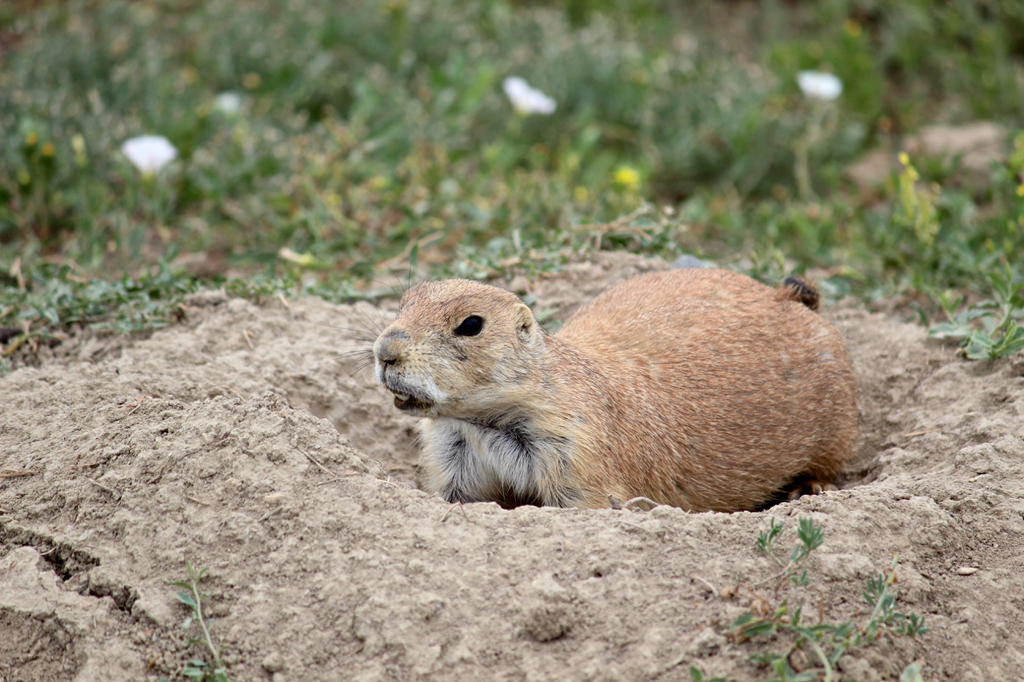 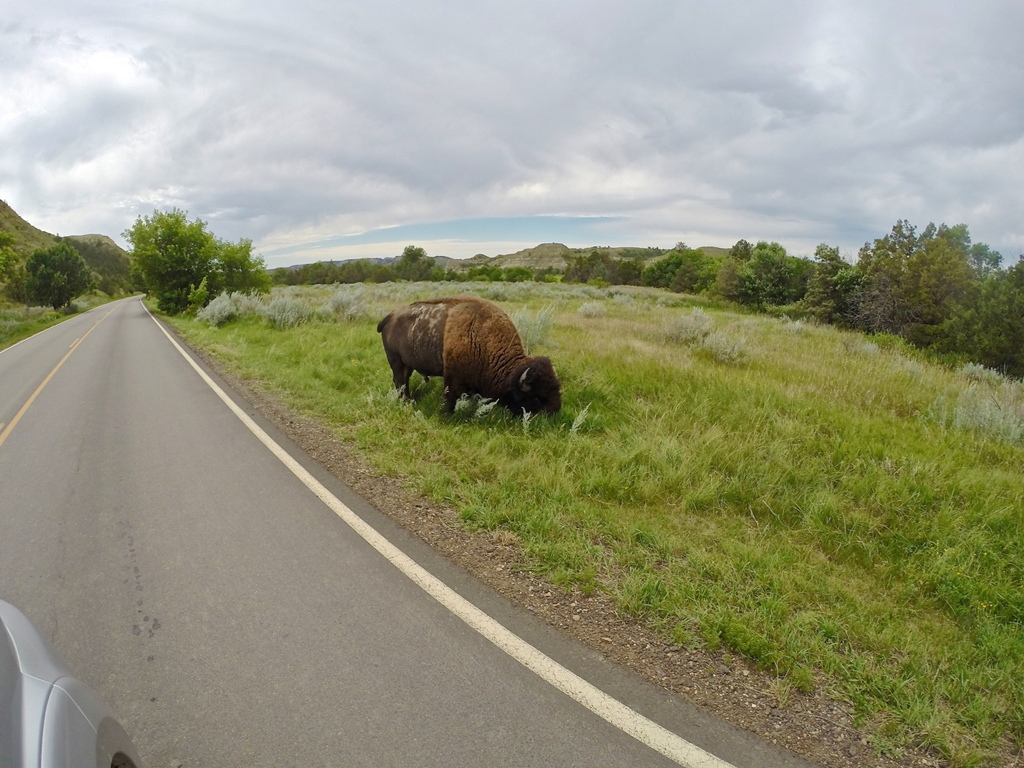 By evening we were passing through more thunderstorms, and into a campsite on a river in Montana. We'll leave this story there, crawling into bed with the sounds of flowing stream behind us, and take a minute to look at some of the outfitting and gear that we've incorporated into the Travato on this adventure... 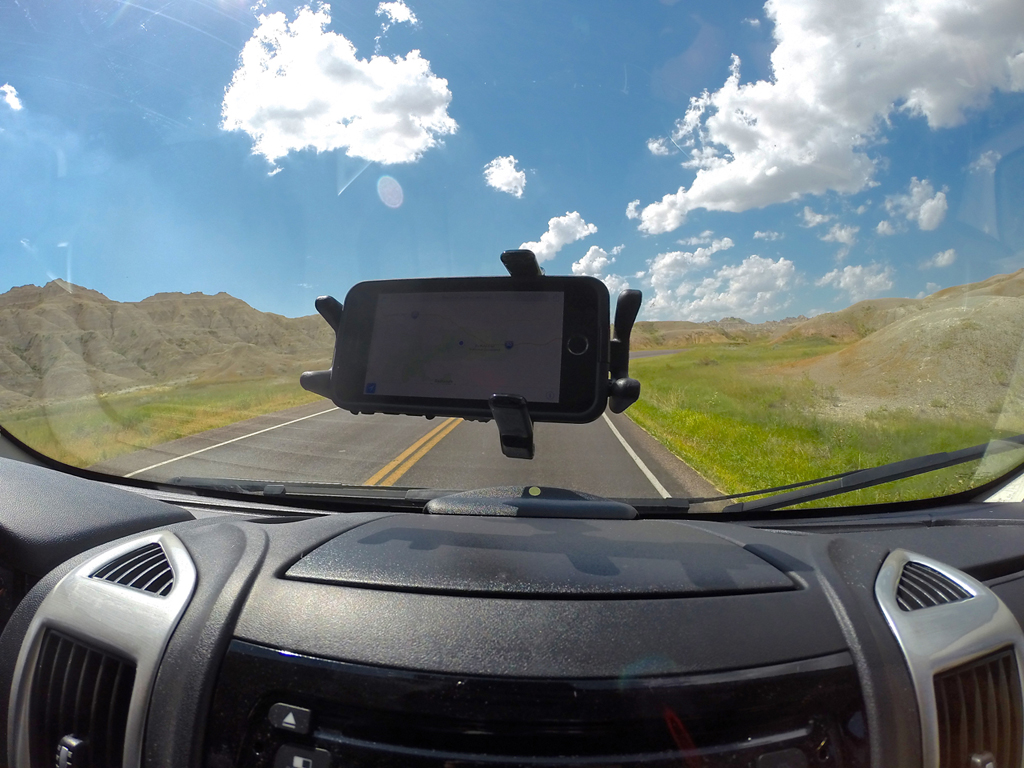 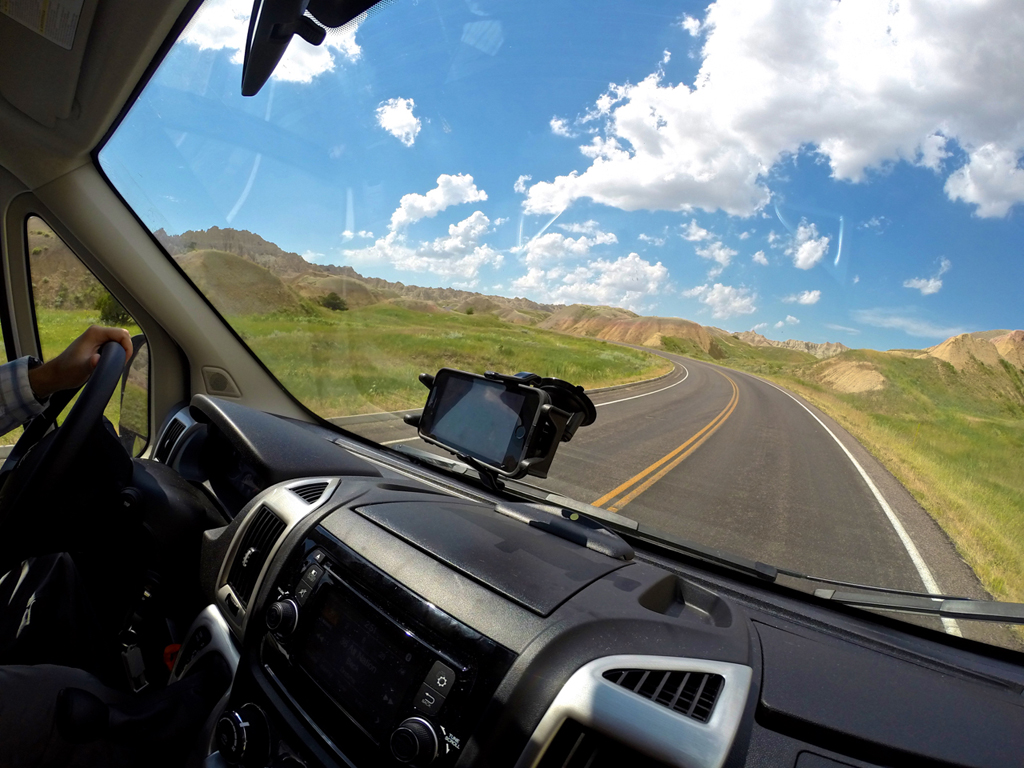 While the Travato comes with a built-in navigation system that you can pair to your phone for calls, I still like to have the option of using my iPhone for navigation, or keeping it handy for quick pictures. I find the RAM Universal Finger Grip to be the most effective, allowing me to quickly mount or unmount the phone with just one hand, and easily moveable with the suction mount on the windshield. I can shift it from there to a side window in the back when seated and working there. 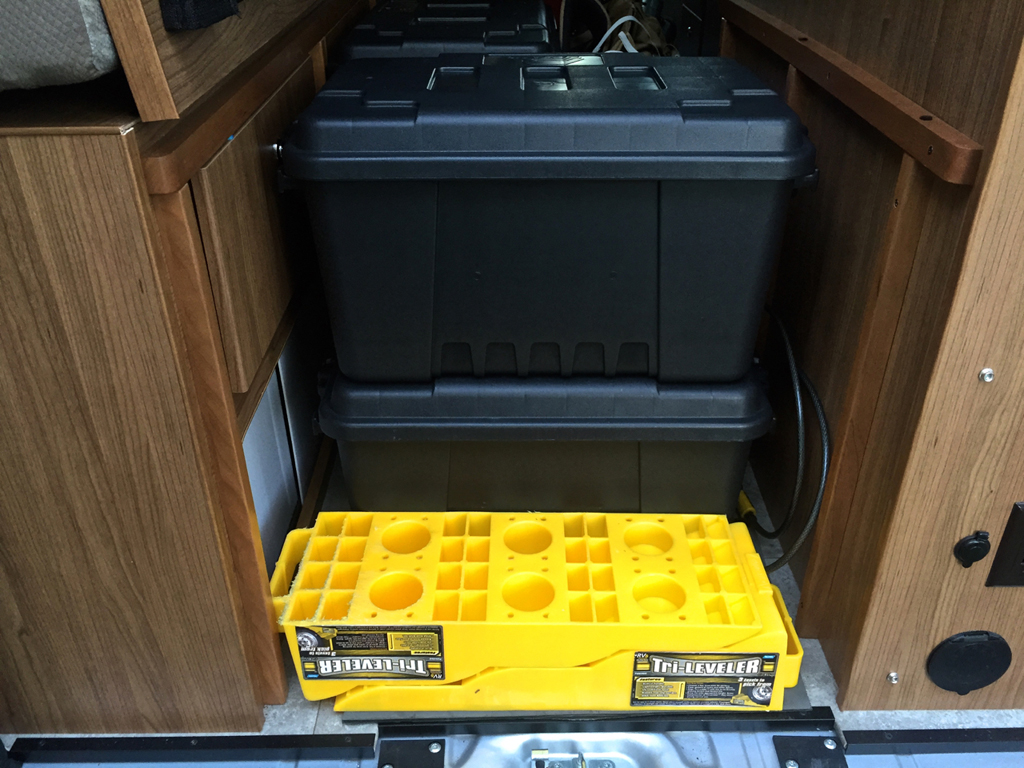 I love storage trunks to keep things organized, and I'm a big fan of the Plano Sportsman's Trunks. I keep two of the Small size (1619) stacked sideways in the back of the Travato under the bed, and two of the Medium (1719) stacked under the bed as well. Next to them I keep a Camp Chef stove, collapsible kennel for Tripper, backpacks, fly rods, an Orion 25 cooler, and other items like leveling blocks that we want handy and accessible when the bed is flipped up. In one small tote I keep kayak fishing gear, in the other small one I keep all the RV cords like the power and water and LP external stove hose, and a cable for locking coolers or kayaks. I keep all the hoses wrapped neatly using Nite Ize flexible Gear Ties. 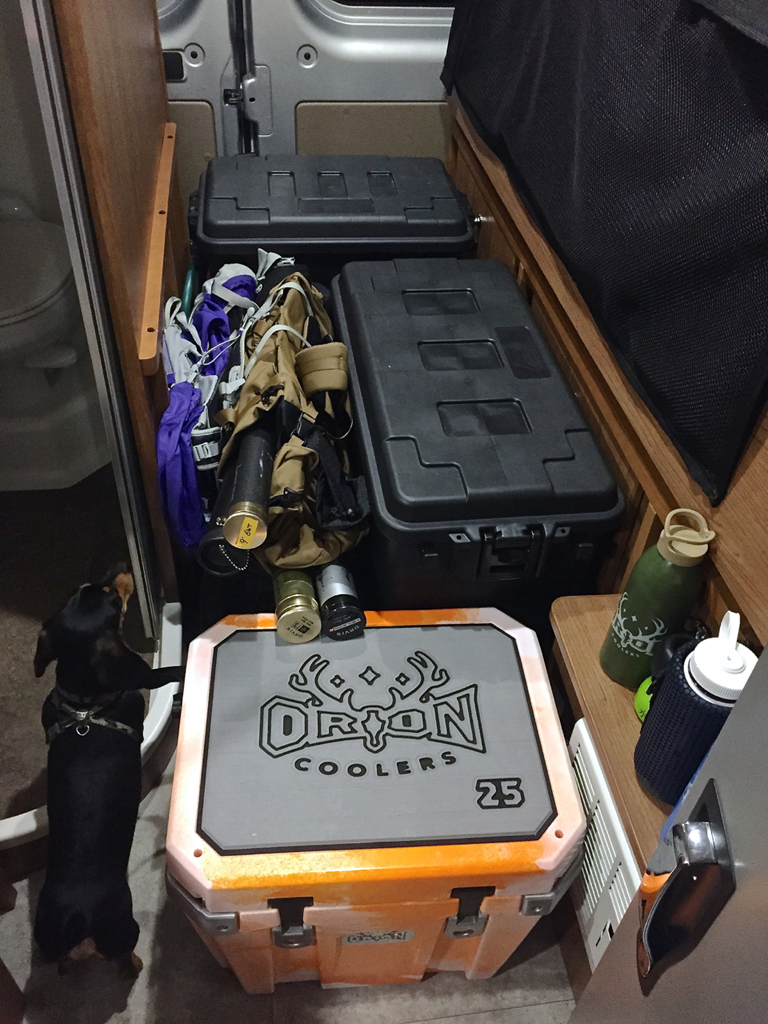 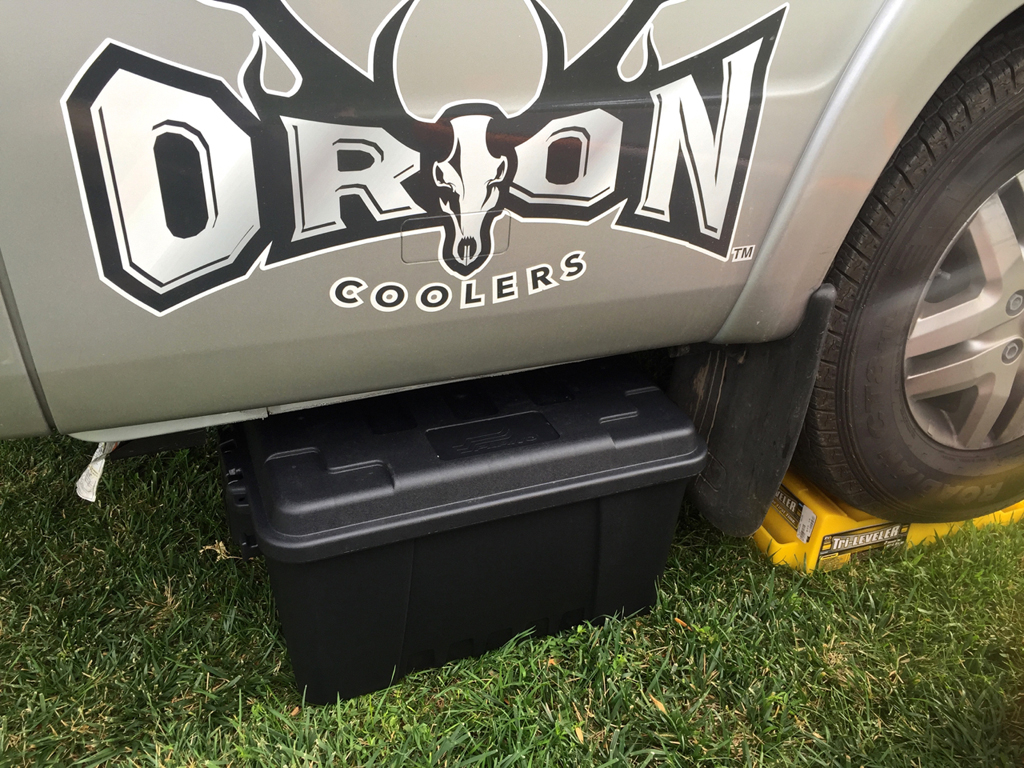 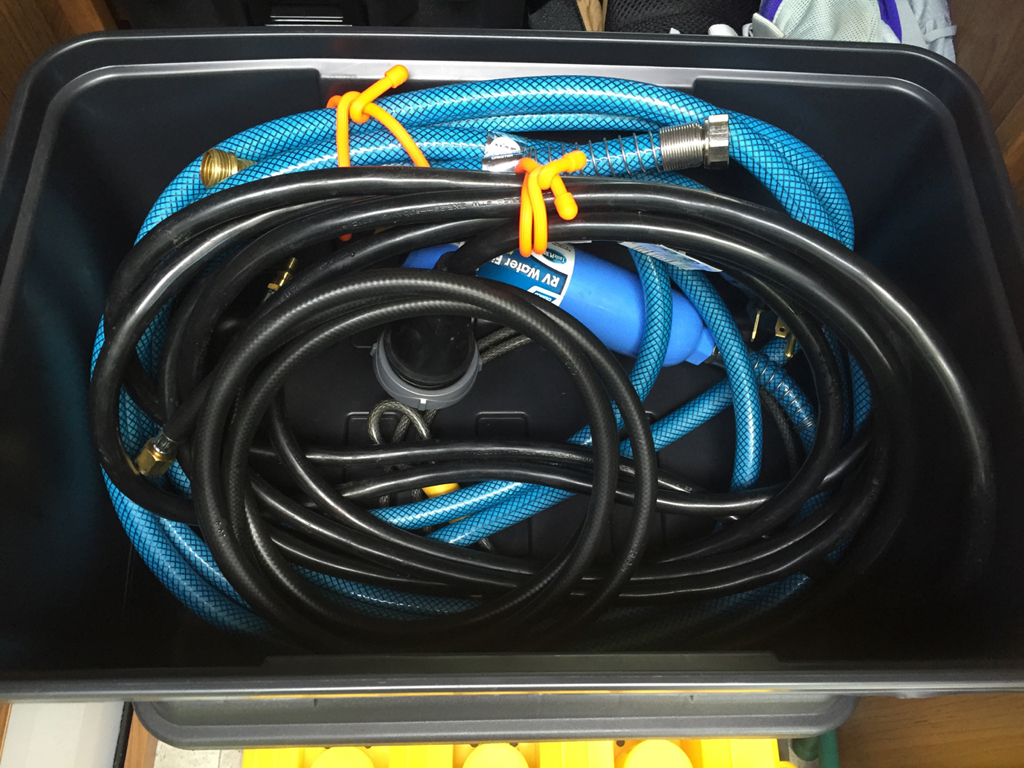 In the two large ones I keep all of our camping and backpacking gear like a tent, camp chairs, backpacking stove, sleeping pads, etc, and in the other I keep all of my fly fishing gear like boots, waders, fly kit, etc. Two stacked nest perfectly under the Travato folding bed, and once parked in camp, they can come out and be stored under the RV. They're weather and bug proof, so no rain or bugs can get in when stored outside, and they're easily wiped clean before being returned inside. They also make a great seat or small table, and are strong enough for us to stand on.