A Quest to Find the Largest Alligator in Florida

We had seen many alligators as we toured and hiked along the west coast of Florida, but we heard that the huge man-eating variety hung out in the Everglades. Sure, there are great beaches, natural springs, terrific parks (both eco and Disneyesque), but what speaks more about the "REAL" Florida than alligators? It was the time to point our Winnebago down the roads that lead deep into the swamps of the Everglades on a quest to find the largest alligator in Florida.

From our campground at Collier Seminole State Park, just east of Naples on the southwest corner of the state, we plotted our trip. We would drive across the Tamiami Trail to Homestead and then turn onto the Everglades National Park road heading to Flamingo at the southern tip of the peninsula. This would be 150 miles of swamp viewing, with tropical plants, colorful aquatic birds, lots of turtles, delicate butterflies, and the alligators. 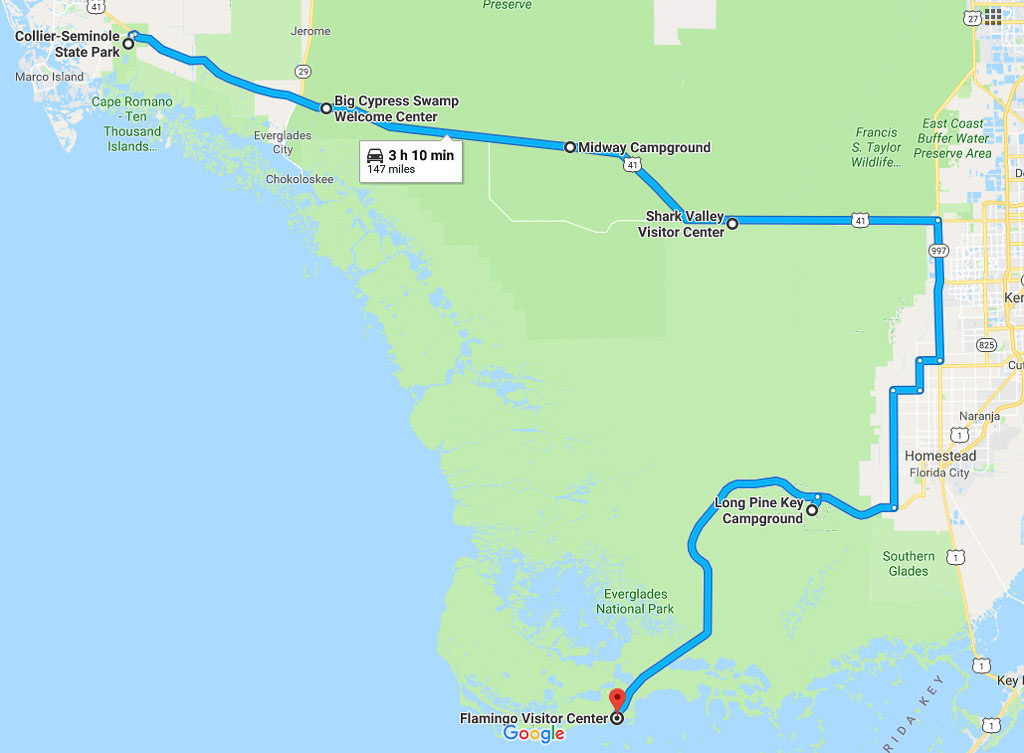 On the western edge of the Everglades, our first stop was Everglades City, the stone crab capital of the world. First, we hopped on the National Park tour boat and took a ranger led tour into the bay. While this was a nice cruise, we only found a few gators, and none of these were of man-eating size. 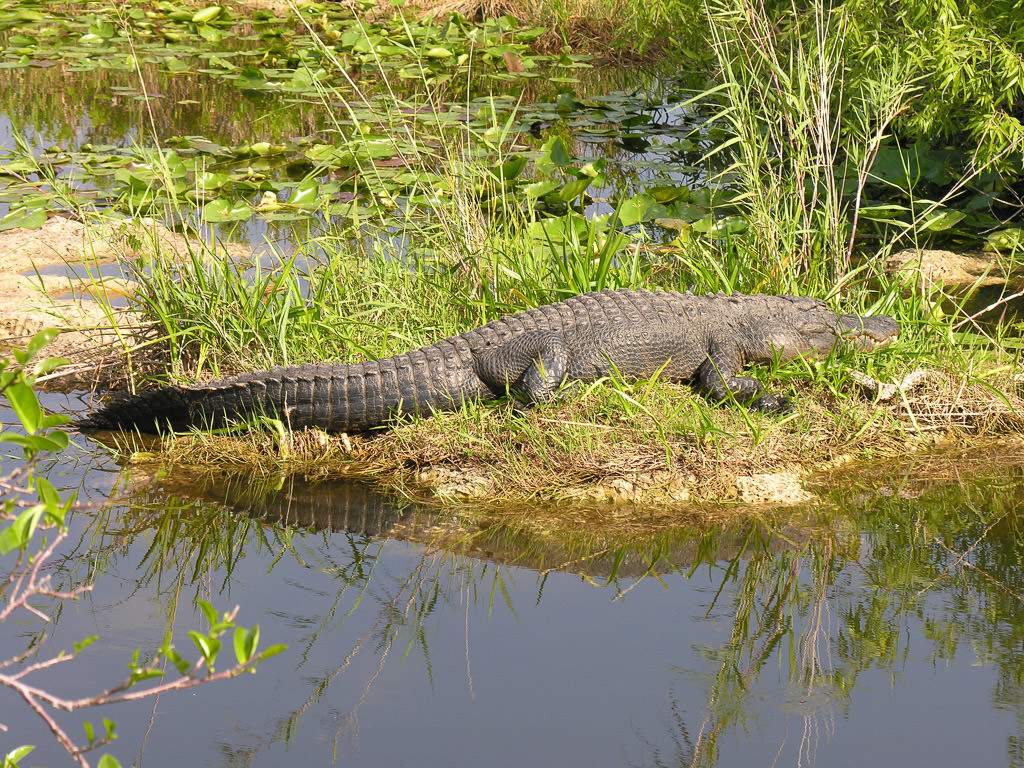 But, speaking of "eating," we did stumble on a great place for local stone crabs, Triad Seafood Restaurant. As we were leaving after a great meal, we were asked by an unassuming man who had just pulled into the parking lot, how our meal measured up. We discovered after telling him how we had just decimated a couple of large plate-fulls, and how incredibly good they were, that he was the owner.

He told us that he was one of the major suppliers to Joe's Stone Crab in Miami, but asked that we not tell too many people about his restaurant as he had, at 77 years old, enough business keeping his small fishing fleet busy and didn't want to grow any larger. (So, no publicity please...)

Next, we headed to Big Cypress Bend and the Fakahatchee Strand Preserve. We walked the half-mile walkway into the swamp checking out all the birds, and the wild orchids. But, our most important question was would this be the place we would find the largest alligator? The prospect looked good as we arrived at the entrance to the boardwalk. There was an alligator almost blocking the path, sunning himself. Or was he collecting the entrance fee? 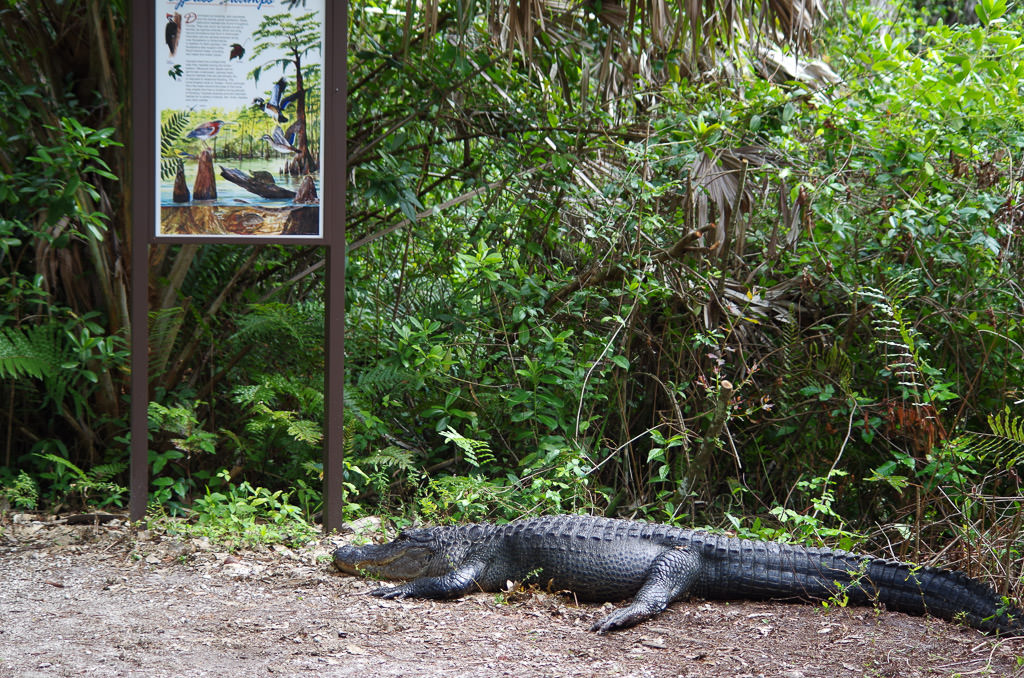 After some thought, we very carefully detoured toward the boardwalk. There were other big alligators aside from the gate keeper, but not the record size we were seeking.

For the night, we pulled into Midway Campground near the Oasis Visitor Center. At Oasis, we again walked a boardwalk checking out the surrounding swamp. We asked one of the very knowledgeable park rangers about where we would find the largest alligators and were told to keep heading into the park, deep into the swamps. The campground turned out to be a nice place to spend the night, with large, paved, and very accessible sites surrounding a pond. 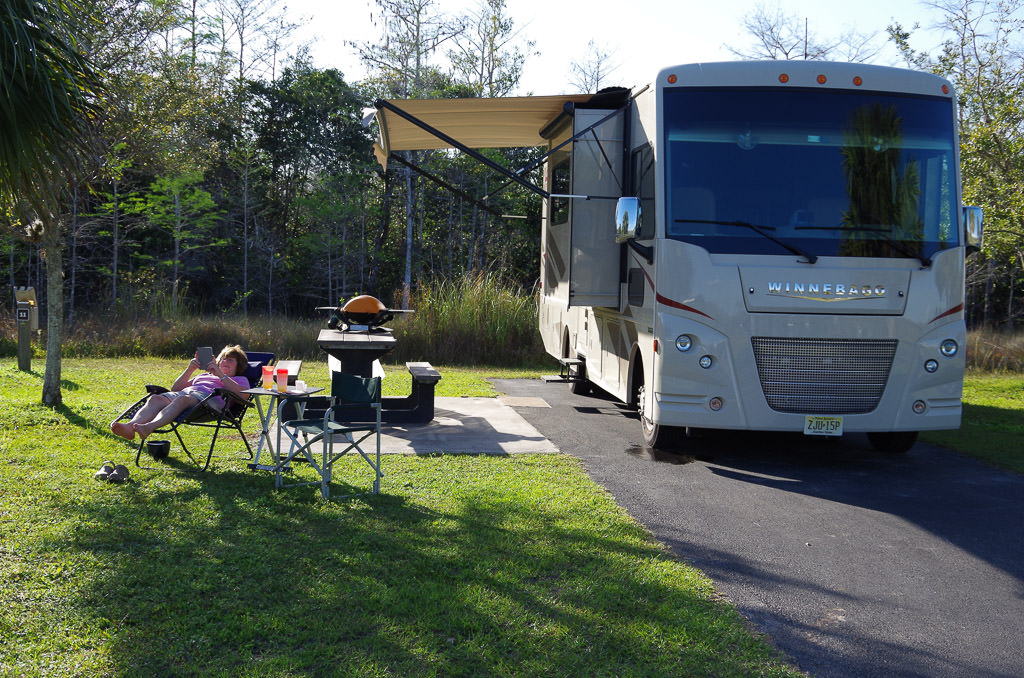 Back on the road in the morning, we continued along the Tamiami Trail to Shark Valley. We parked at the large parking lot and got out our bikes, so we could bike the 15-mile loop trail through the Saw Grass Swamp. (Rental bikes are also available.) What a great ride with loads of alligators in the canal, along with wonderful water birds including herons, ibis, egrets. There were also lots of turtles and butterflies.

At the 7-mile mark, we got off our bikes and climbed the viewing tower for an aerial view. The view of the Everglades swamps continued past the horizon -- and gave us pause about what was here before any development. 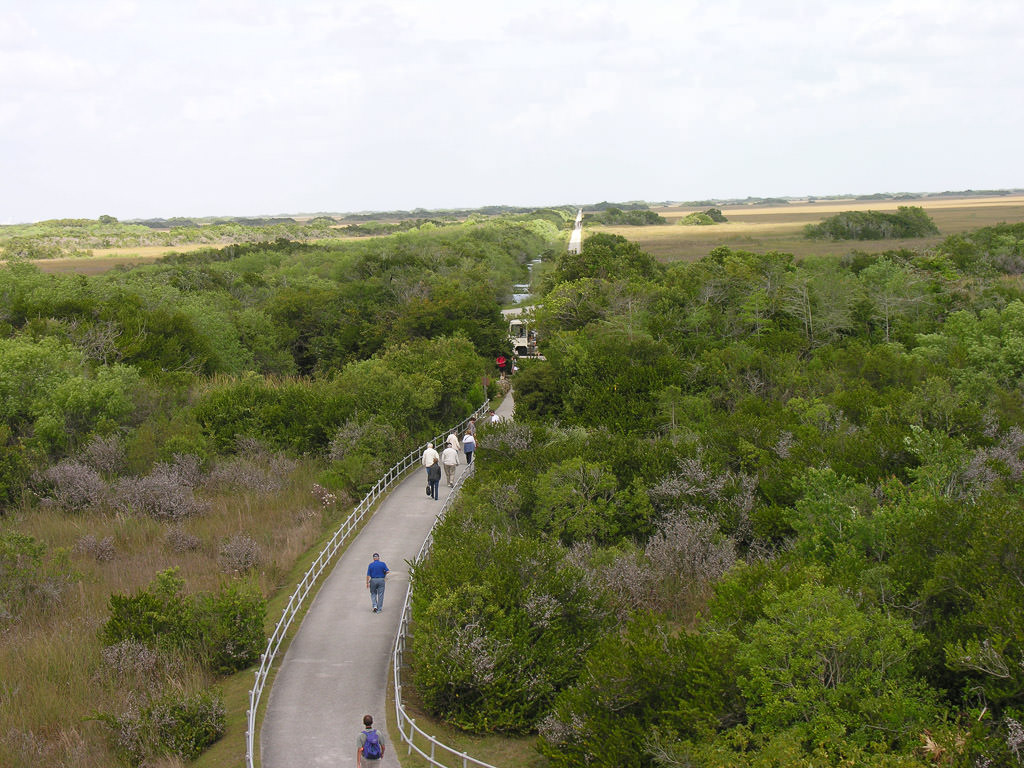 On our biking return, we spotted a really large alligator just a few feet off of the trail. Was he positioned to take a chomp out of our bike's tire? This gator was definitely a tire-eater, but not big enough to be a man-eater. And, we learned they CAN move faster than our bikes, but today they all seemed content lying in the sun while watching the bikers zip by.

Back on the highway, we stopped at the famous, "Robert is Here," fruit market and world-renowned smoothie center. This is a must stop on the way to Everglades National Park's entrance station. Love those smoothies! This diversion is RV-friendly with lots of parking, both in their parking lot and along the side of the road. What could be better on a hot, sunny day!

On entry back into the Everglades National Park, we stopped at the Ernest F. Coe Visitor Center where we booked some ranger led programs. We then headed to our campsite for the next few days at the NPS Long Pine Key Campground. Although this campground doesn't take reservations, the 108 sites are rarely filled. In addition to paved and level sites, there are even solar showers (unusual in a National Park campground).

This campground is in a great location to access the several hiking/biking trails, some available with Ranger-led guides. The park service even supplied no-cost bikes for one of our guided trips! 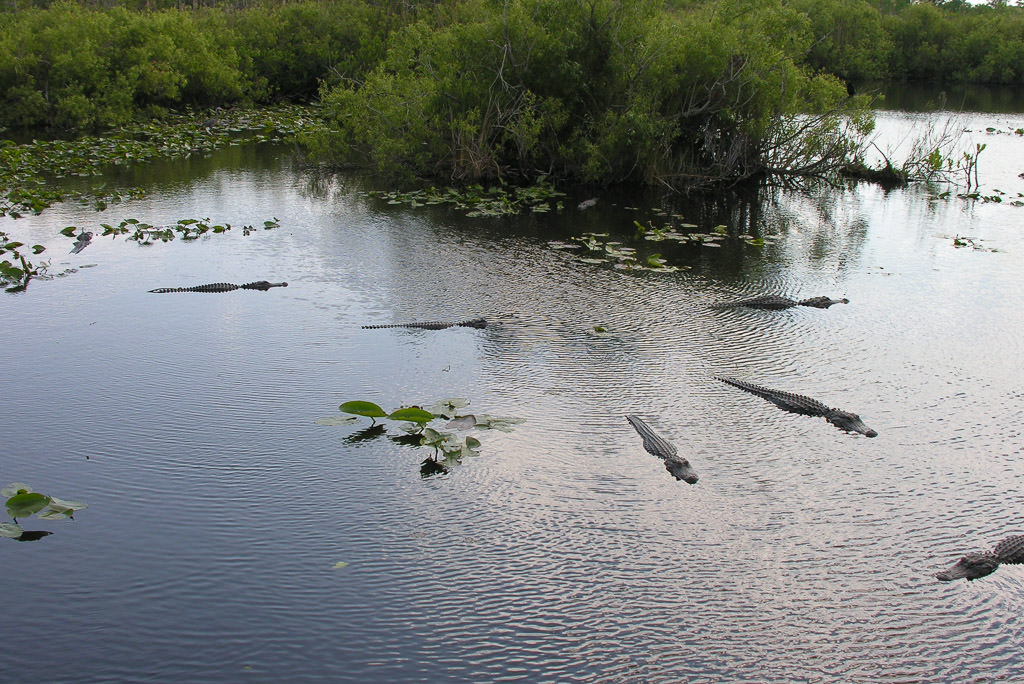 First, we heard the crunch, then we saw the man-eater! Err, maybe not a man-eater, but definitely a turtle eater. As we watched, this gator was enjoying his turtle meal. But hold on ... with all the chomping, the shell was just too hard and too big. We stayed, watched, and then cheered the turtle's escape from the jaws of this gator. 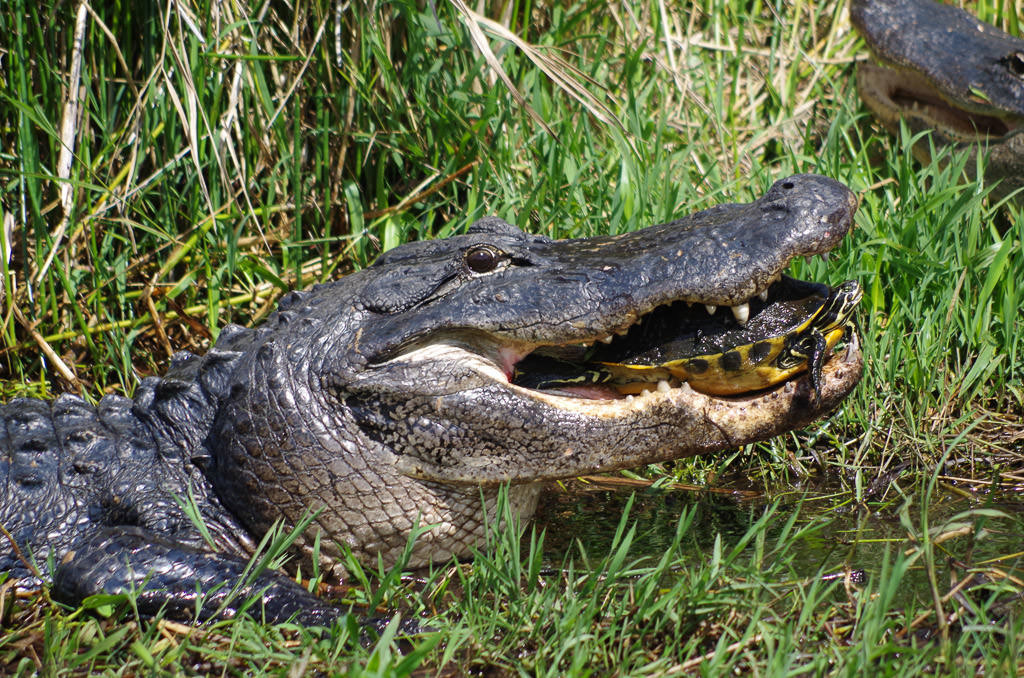 Now on to Flamingo at the southern most tip of the park's highway, 35 miles through the swamps. There were many great stops along this road including a trail through the Mahogany Hammock and a great viewing area of Spoonbills at Nine Mile Pond.

Arriving at Flamingo was arriving back in civilization. There is a visitor center, general store & restaurant, and boat rentals for trips into the swamps or into the bay. The NPS campground in Flamingo has both sites with electric hookups and no-hookup sites. The electric hookup is a nice feature when the mosquitos are numerous, and the temperatures are high, and we could run our air conditioner. 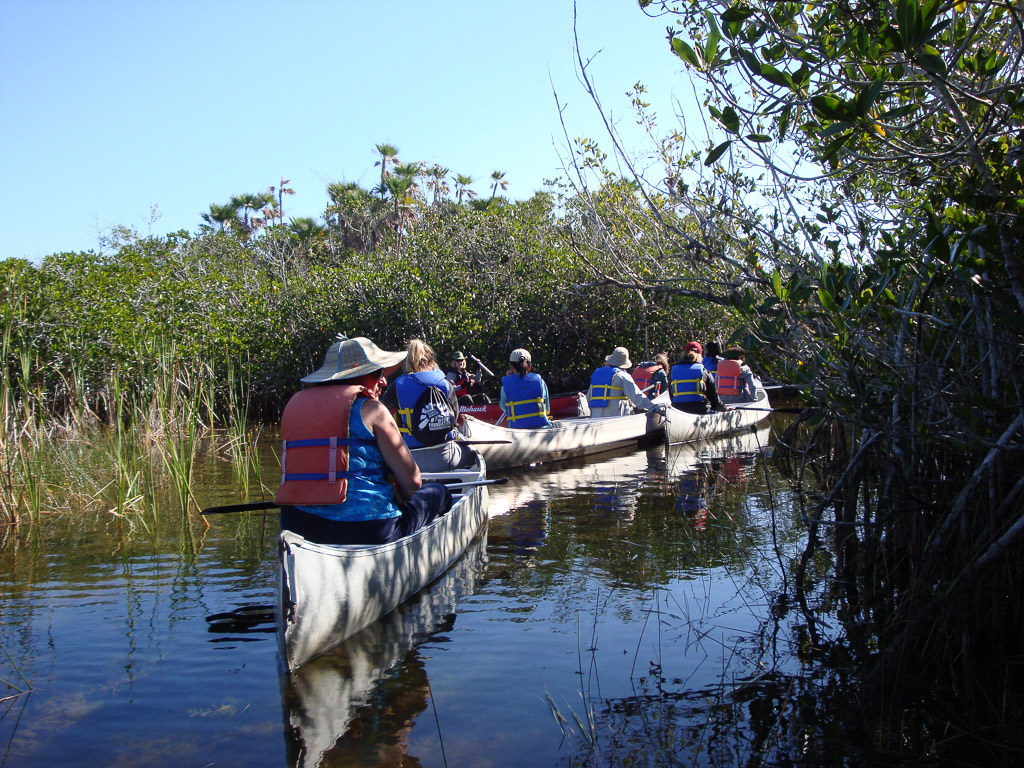 During our stay at Flamingo, we booked the ranger-led canoe trip through the swamps; another opportunity to find the largest alligator. (Once again, the park service supplied the canoes at no-cost.) We saw many gators, but not the largest one.

After spending a few days at Flamingo, we were ready to move on to another adventure. But, did we find the largest alligator? While we may not have seen the largest out there in the swamps of Florida, we think we did find a contender along the Anhinga Trail. Regardless of if he was or not, our travels were well worth the quest.