One of my favorite places in the world is Jackson, Wyoming. Well known as an outdoor lovers paradise, Jackson sits at the heart of the playground created by the Tetons, with world class climbing, skiing, fly fishing, paddling, etc. I fell in love with the Tetons on a ski and winter mountaineering trip in college, and my last trip there was in 2000, a climbing trip with my friend Neil from Clemson. We spent 5 days in the mountains, climbing the Grand, South and Middle Teton, getting our camp raided by Gatorade crazed marmots, and even chased by grizzly bears. 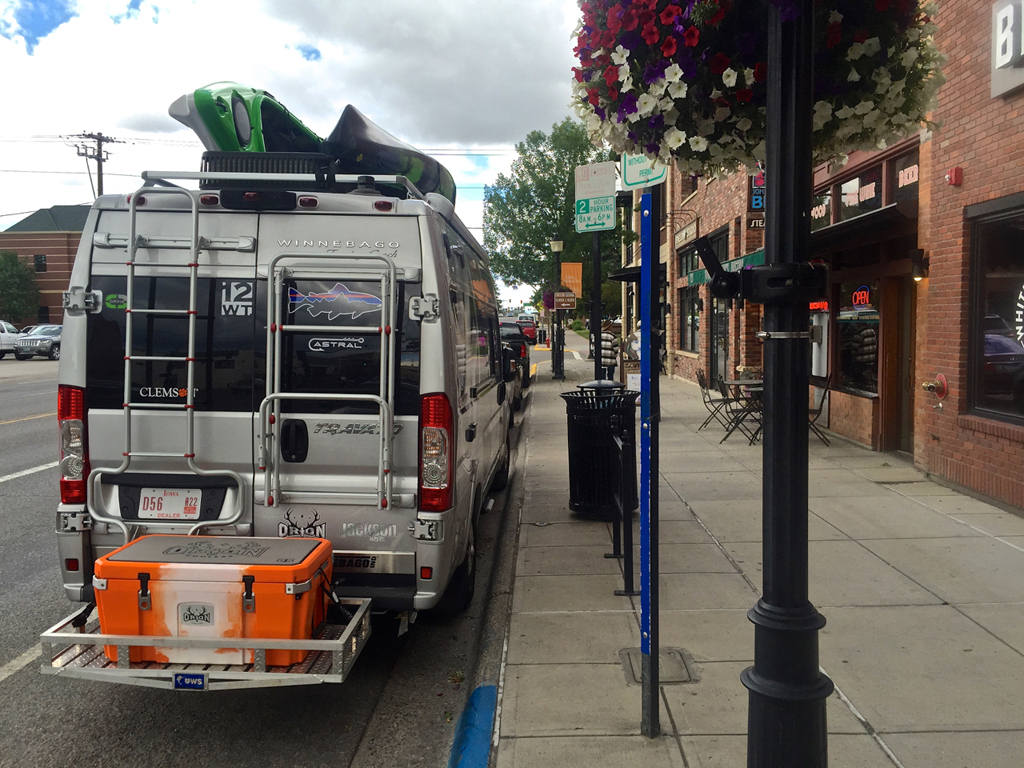 On that trip we were single, dirtbag climbers, either slept in the dirt, at the Climber's Ranch, or in the back of Neil's mother's Grand Cherokee that we borrowed. Times have changed a bit, and now it was great to be rolling into the valley and greeted by the mountains I love, with a wife, dog, and a Travato chariot with a little more room than the back of a Cherokee. I took some time to recreate a photo that I took fifteen years earlier, pointing to the summits of the South and Grand Teton after having just climbed them. There's more grey hair on my chin now, but I like to think I'm still the same guy. 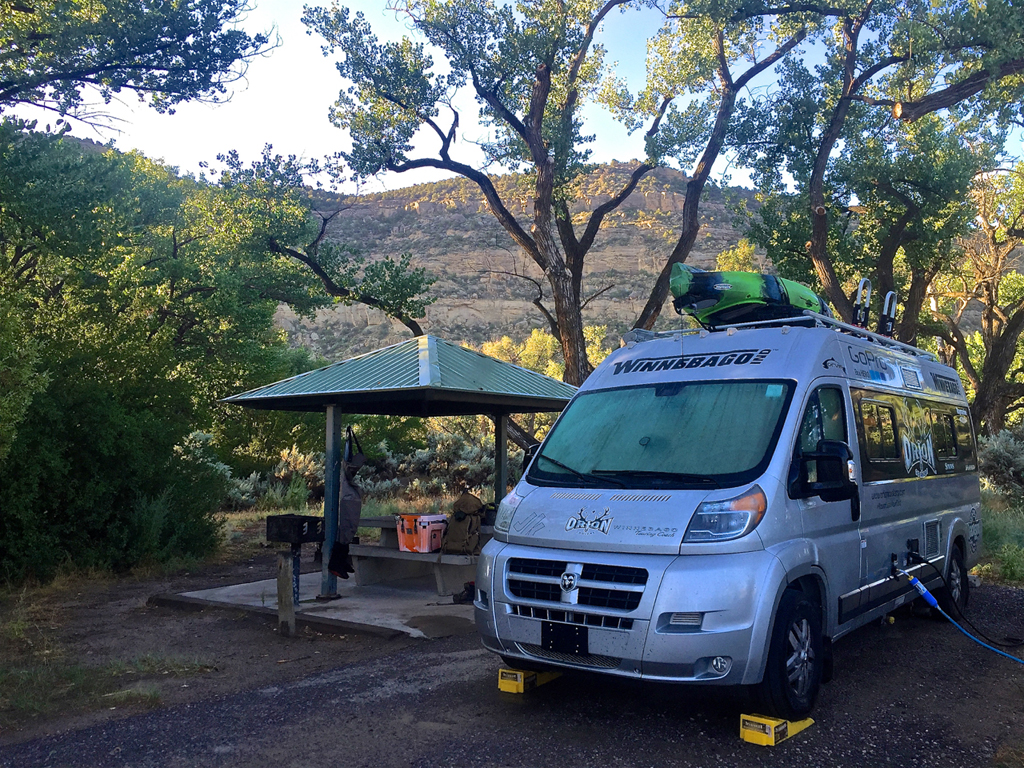 This was Ashley's first time in Jackson, so first stop in town was downtown to check out the scene and find lunch, and once again the compact size of the Travato paid off, parking it right on the square by the famous antler arches. 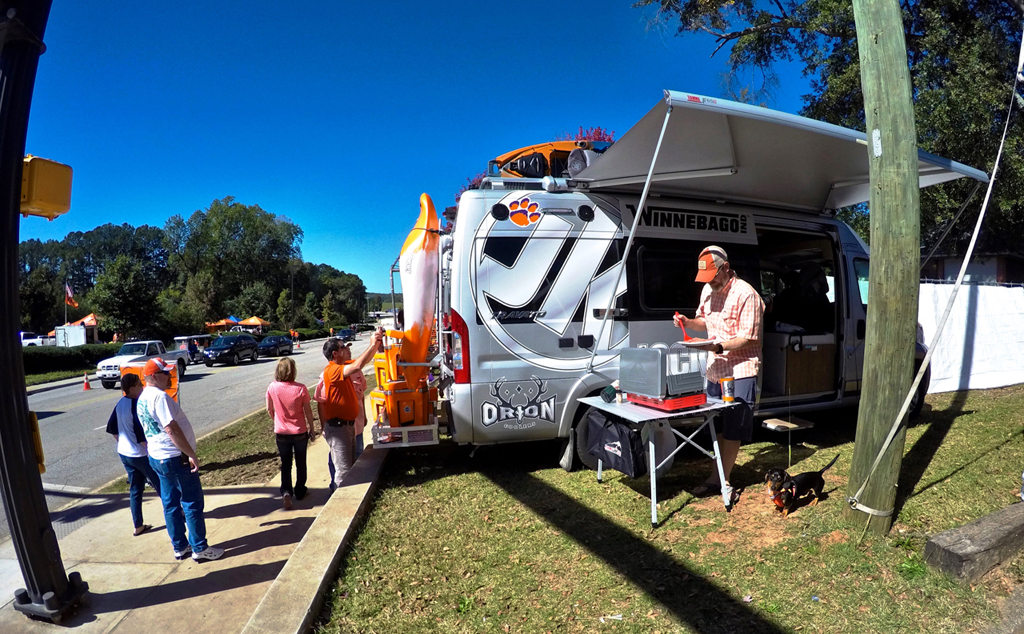 We toured the town a bit, and made a plan to find home for the evening. First stop there was the local Orvis fly shop to get some info on local fishing conditions, license, and pick up some flies. Flat Creek would be opening the next day for the season, so they were having a season kick-off party. That also steered us to the National Park campground on the Gros Ventre river. 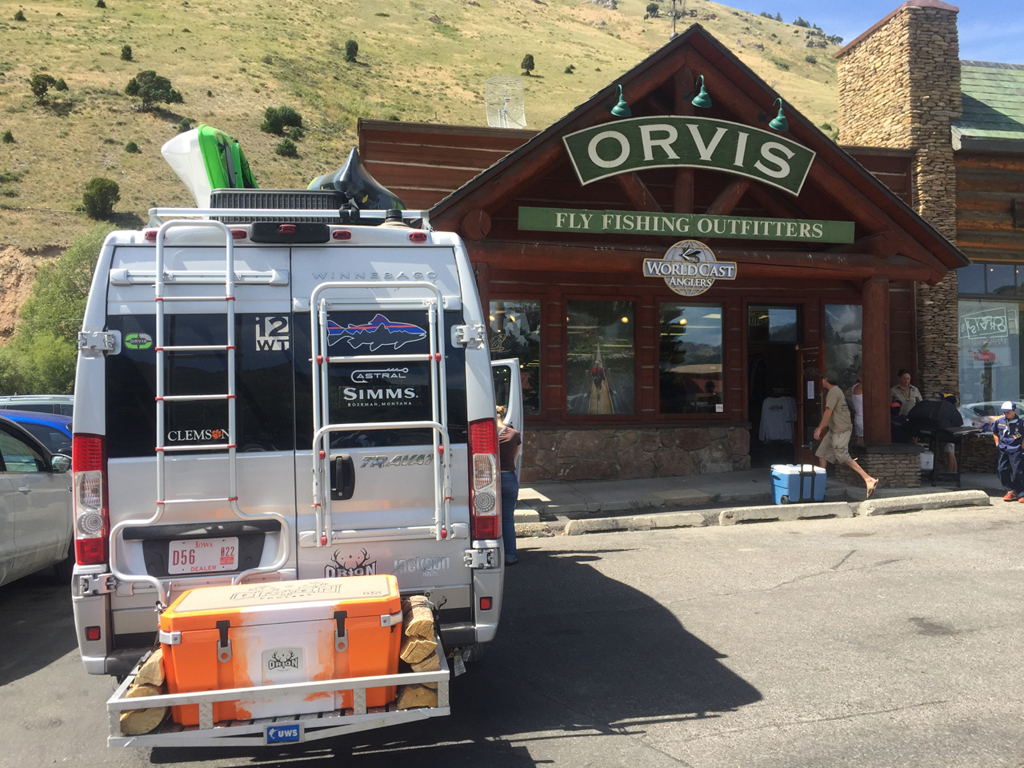 The Gros Ventre campground is right on the river, just a few miles North of Jackson, and also very close to Flat Creek for easy access the next day. It's a tributary of the Snake River, and has plenty of native cutthroat in its waters as well. There are over 300 sites there, from tent to RV electric, and we were able to lock one in without a reservation by getting there before the evening rush. There was time to hit the river before dark, so that's exactly what I did. Just a short walk from our site and I was wet wading the Gros Ventre. It's a beautiful, clear water stream that borders the National Elk Refuge, but on this day, it wasn't an elk that I'd be spending the evening with. I was standing in a pool, tying on a new fly after having just lost a fish when I heard what sounded like a gallon jug gurgling from being dumped with water. I looked downstream to find a large bull moose had decided he was thirsty, and the water in my pool looked refreshing. There are a lot of moose in the valley, and they like to bed in the thick cover and shade of the Cottonwoods along the river. Always impressive creatures, they can be unpredictable and you need to give them their space, so I let him be and headed back to the Travato for a shower and dinner. There'd be plenty of fishing on Flat Creek tomorrow..... Our main clothing storage in the Travato are the overhead bins above the folding bed. Ash uses the left side, I use the right, and we keep all of our clothes neatly folded and organized there in Eagle Creek packing cubes. I've been using them for many years, and they are perfectly sized to fit in the cabinets. One for pants, one for shirts, one for t-shirts, underwear, etc, they are a great tool for keeping clothes organized and maximizing storage space in the Travato. As cool as it was for me to spend time on the river with a moose, Ash didn't really want me to smell like one. It was time for a shower. The combo bath/shower in the Travato is compact but fully functional, and certainly capable of removing some river stink. With room in there also at a premium, we didn't want to take up a bunch of it with bulky towels, and PackTowls solve that problem perfectly. Light, compact, and incredibly absorbent, they are just as at home hung in the bathroom, or folded up in the backpack. They dry you quickly, dry themselves quickly when hung, and are incredibly light and compact when folded up in their storage pouches. We like the 'personal' style as a full body towel, and the 'nano' as a face/washcloth.