In our experience, the unknown is far more terrifying than that which we understand. For example, when I first experienced a great white shark up close and in person, I was completely terrified and quite certain that it was intent on coming to gobble me up. However when I shared my story with a surfer from California, who has spent a lot of time around these colossal, menacing creatures, he simply laughed and said, "Oh, they'll just give you a good bump trying to figure out if you are food or not. Once they realize you are not in their food chain, they will leave you alone." He then shared countless tales of close encounters with sharks that involved a bump and sometimes, what he describes as a nip, before heading off into the deep blue ocean in search of other prey. His knowledge of shark behavior allowed him to enter their environment with confidence on a daily basis for years and survive unscathed. Me on the other hand, I think I'll stick to the safety of the mountains.

In our decades of experience in the back country, Peter and I have had many, many encounters with bears. We have had them come into our camp while cooking dinner, found paw prints on the side of our truck, and have watched in awe as they have lumbered by us in the woods. Over the years we've developed a certain level of cautious comfort in their presence, and can't help but smile when we pass parties in the back country jingle-jangling their way through the woods adorned with bells and an over-exaggerated phobia of a near-death encounter with the curious and easily frightened black bear. As well versed as we are in black bear behavior, we have absolutely zero experience in brown bear territory. 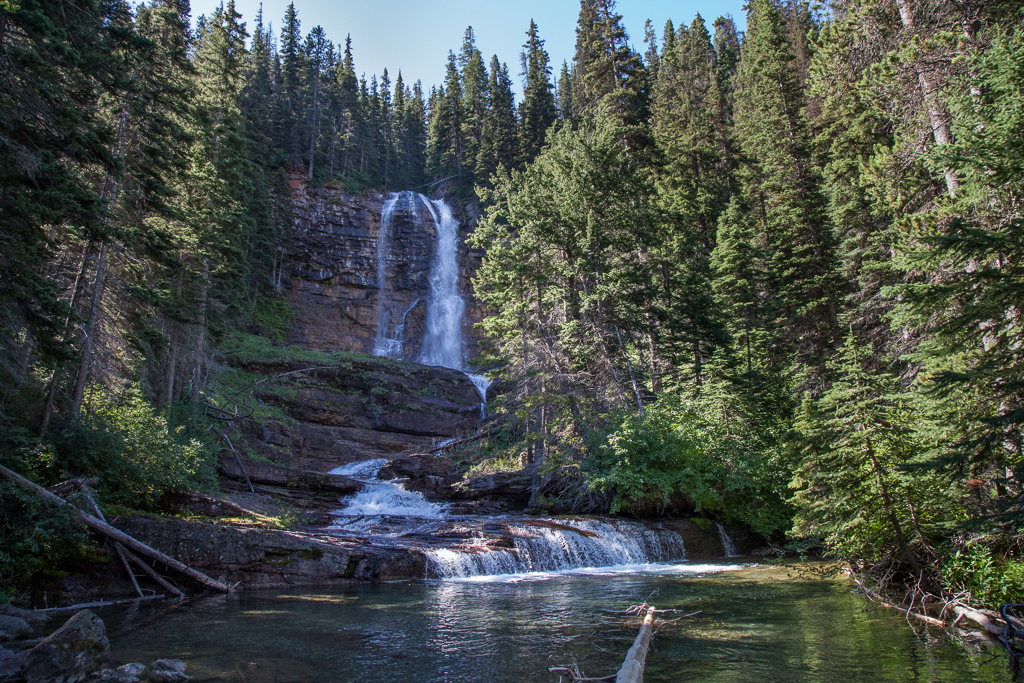 The terminal point of our adventure in the park.

When we decided to embark on a last minute hike to explore just a little more of the extraordinary landscape of Glacier National Park, we really weren't overly concerned about encountering a grizzly bear. In all honesty, the odds of actually seeing a grizz on our 5 mile foray into the wilderness were pretty low, and we thought the buzz about grizzlies was probably as over-exaggerated as that of black bears. Regardless, we headed into Apgar Village to buy bear spray, just in case, only the find that everything was closed for the night. The next morning, we caught the early express bus that took us from the Visitor Center, up over the pass to the Jackson Glacier Overlook. On the ride up, through the spectacularly rugged alpine terrain, we befriended a couple who had spent the past six years working as naturalists in the park. We swapped stories of adventures past and they shared beta on some of their favorite places in the park.

Already regretting our lack of bear deterrent, I casually asked what, if anything, these experienced climbers carried in their packs for bear defense. I expected them to laugh, roll their eyes and say that the whole bear encounter was completely over-hyped. Instead, they shared a story of a friend (with bear spray) who was charged, batted around a bit, and left bleeding and extremely grateful to be alive. The attack occurred because he inadvertently crossed between a sow and her cubs - normal bear behavior but certainly an easy mistake to make in the dense undergrowth of the forrest. Unsettled, I took a deep breath and reassured myself that we would be fine, we just needed to remain hyper-aware of our surroundings while hiking. 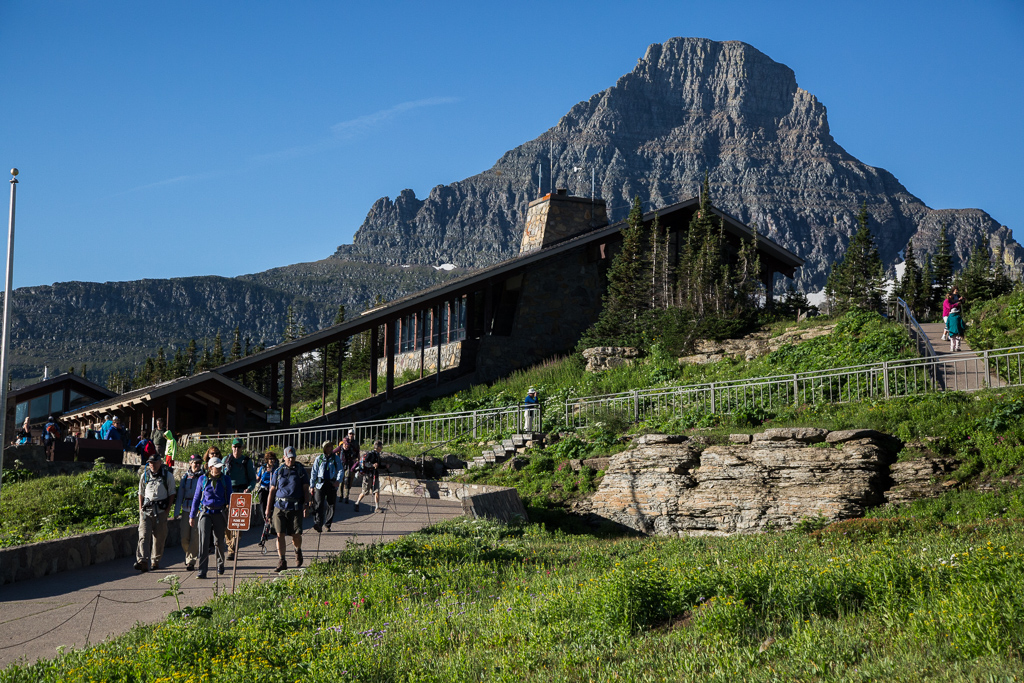 The Logan Pass visitor center is the pinnacle of the bus shuttle through the park and where we transferred buses.

At Logan Pass, we had to transfer to a second bus that would take us the rest of the way to the trailhead. Peter, while waiting for the next bus and somewhat anxious from the conversation with the naturalists, ran up to purchase some bear spray at the visitor center only to find it didn't open for several hours. As we boarded the next bus, we were welcomed aboard by a boisterous driver whose first question was "You have your Grizz-Be-Gone spray right?" and proceeded to tell us about every bear attack in the history of Glacier National Park. Not wanting to fall victim to the hysteria, I asked if he knew how effective bear spray was in warding off an attack and his response was that only one in seven bears tested even responded to the spray. This confirmed for me that, as I suspected, there is a good bit of marketing behind the over-dramatization of the need for bear spray. It left me wondering how many bear attacks had been actually been thwarted by bear spray. As we stepped off the bus with more questions that answers, that inner voice in my head was second guessing my judgement in heading out into the wilderness unarmed. 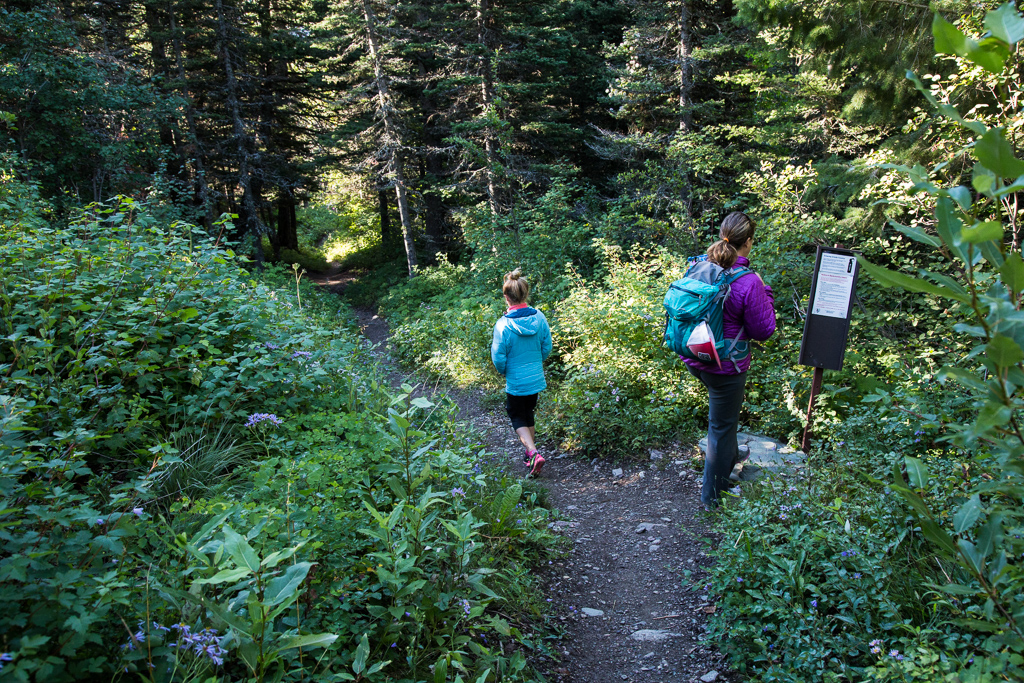 Kathy reads the bear warning as she stalls waiting for the larger party to blaze the trail ahead of us.

There was another party of eight ahead of us and we fell back on the old adage of safety in numbers and kept them within sight just ahead of us. Obviously if anyone was going to cross that invisible threshold of bear tolerance, it would be the people in the front. A fourth of the way through our hike we came to a fork in the trail and the other party continued down the well worn trail while we, unfortunately, took the path less traveled. In fact, there was so little traffic on our route that we found ourselves alone wading up to our armpits through dense undergrowth - a perfect scenario to inadvertently stumble upon a bear. Our senses escalated to high alert and we started talking, clapping, whistling, yelling - anything to alert a bear to our presence and prevent a surprise encounter. 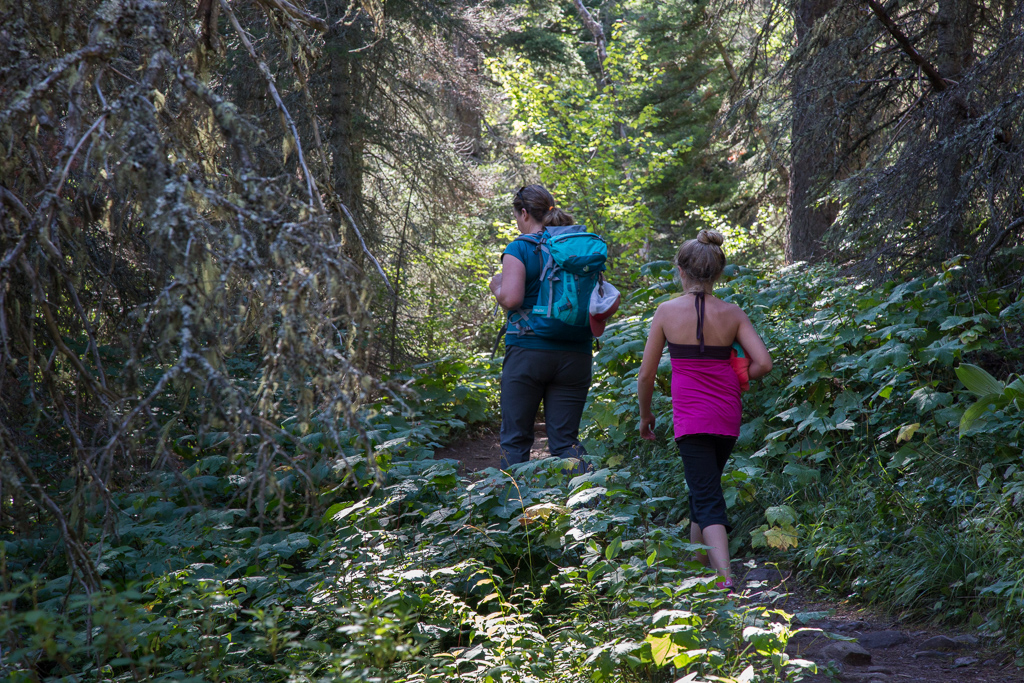 Kathy and Abby wading through the dense undergrowth on high alert watching for bears.

We self consciously laughed at our ridiculous behavior, and anxiously continued with our raucous parade deeper into the forrest. Suddenly, Peter stopped, frozen in his tracks, frantically scanning in every direction. I could see his body tense as he searched the area around us. As Abby and I caught up to him, I saw at his feet the largest pile of bear scat I had ever seen. The circumference of the mound was larger than a basketball and the diameter of each feces wider a rolling pin. There was steam radiating off of the massive pile indicated it was incredibly fresh. So much for the notion that we were unlikely to see a bear. 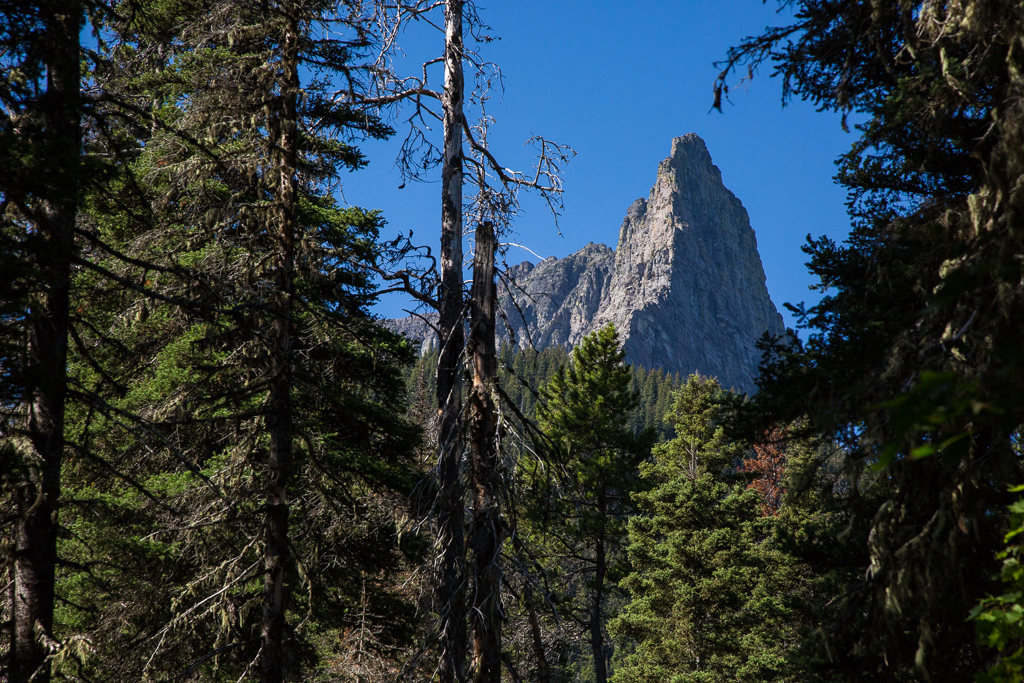 This monolith stood sentry over us as we anxiously crossed through the brushy desolate area and discovered the bear scat.

We redoubled our efforts to make noise and exited the area with as much calm as we could muster. We continued to frantically scan our surroundings for any sign of trouble. Within minutes I noticed a large silhouette moving slowly through the woods off in the distance. My heart leaped out of my chest and my adrenaline surged in preparation for battle. I alerted Peter and Abby to the peril that awaited us. Peter doubled over in laughter as Abby triumphantly announced that my bear was in fact two hikers on an adjacent trail. Slightly embarrassed and incredibly relived, I waded through the last of the dense undergrowth and stepped onto the well worn path leading the St. Mary's Falls, comforted once again by the blanket of safety in numbers. 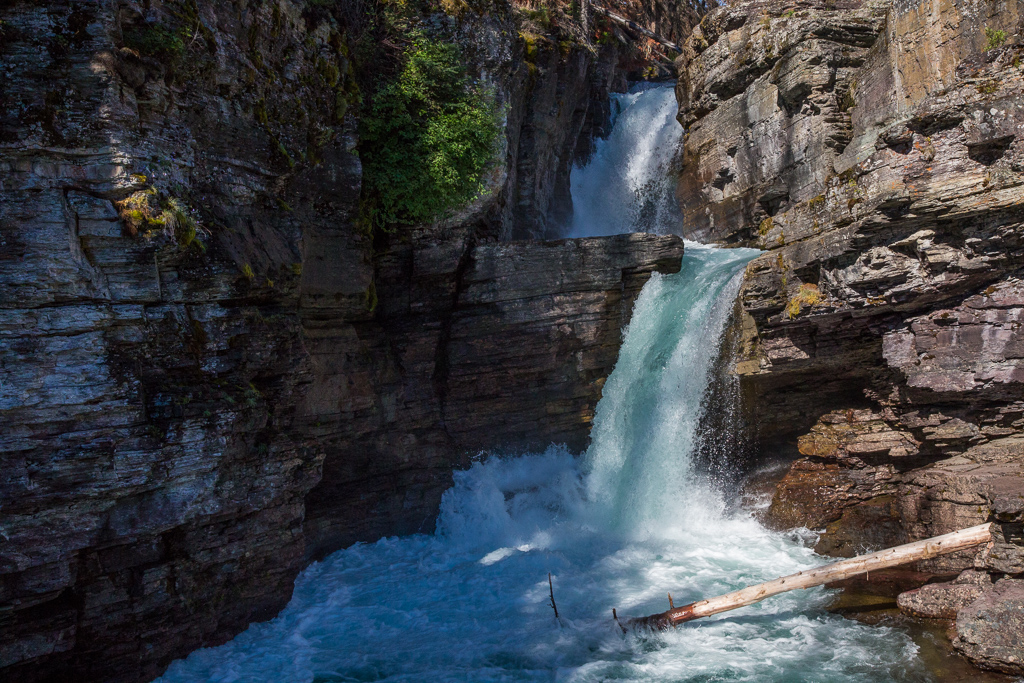 St. Mary's falls was one of the highlights along the way

Looking back, I have no idea if we would have been any safer armed with bear spray, but I can tell you that our first stop, after ice cream of course, when we returned to civilization was to the gear shop to purchase a can of Grizz-Be-Gone. Effective or not, at least I would have a can of hope to cling to for my next grizzly encounter.

NOTE: According to a ranger who specializes in bear mitigation for the Canadian Provencial Parks, we learned that when used correctly, bear spray is 70% effective in warding off an attack. Of special note is that once a bear is successfully sprayed, it will be incapacitated for a few minutes. That is the only time it is ok to run from a bear, because it is likely to charge again with full fury once it recovers.