A Great American Hike: Up from the bottom

In preparation for my hike to the bottom of the Grand Canyon, I booked two nights at Phantom Ranch, thinking I might need a day of rest in between my South Kaibab descent and Bright Angel exit. The long, 10.5 mile hike out of the canyon with almost 5,000 ft in elevation gain is both daunting and haunting. So an extra day in between to explore around the ranch sounds like a good idea to rest my weary legs. 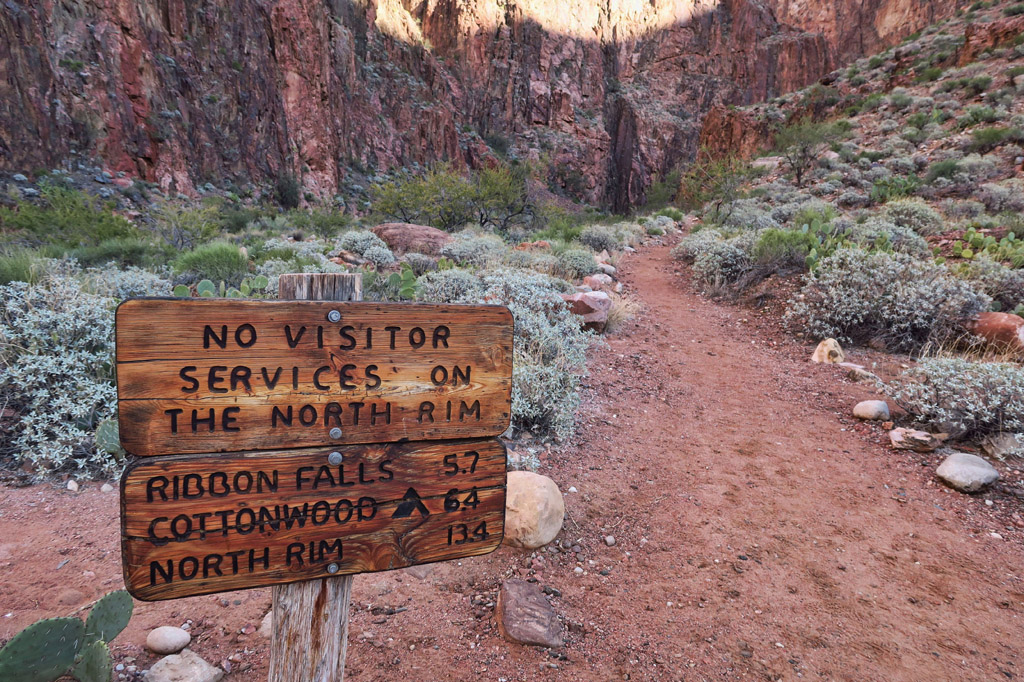 Although several fellow hikers have extolled about the beauty of Ribbon Falls, that's a 12 mile round trip hike up the North Kaibab Trail from the Ranch...way too far for my "day off." Still, I'd like to see a bit of the trail, the only northbound exit trail out of the canyon. Since the North Rim is closed at this time of year, there is no shuttle service back around to the South Rim. So unless one wants to hike a "Rim to Rim to Rim," meaning cross the canyon twice, one must exit back out to the South Rim during the off season from mid-October to mid-May. Ribbon Falls is almost halfway up the North Kaibab Trail, so I set my intentions to turn at three miles, halfway to the falls. The first part of the trail is reported to be reasonably flat, so I figure it will be a good option to keep my legs limbered up on my day off. 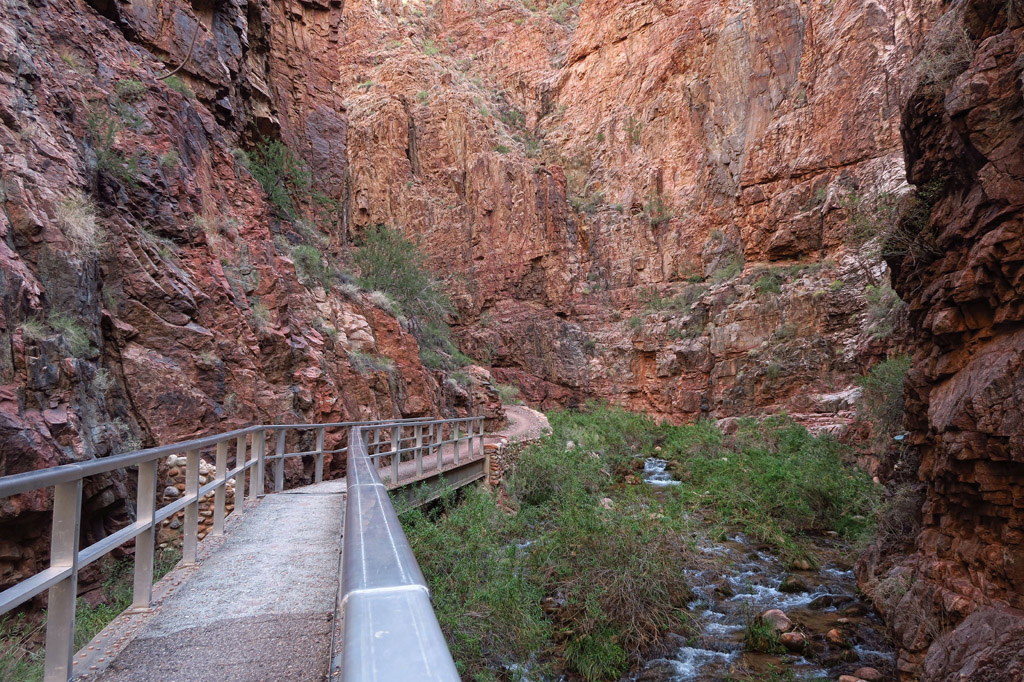 But once I get started, I don't want to stop. The trail follows the Bright Angel Creek through a deep, dark gorge referred to as "The Box," a narrow canyon of chiseled cuts through the basement rock of Bright Angel Canyon. The views are stunning, with the sound of the rushing creek echoing across the narrow gorge. Hikers coming in the opposite direction exclaim, "...but you must go to Ribbon Falls...it's a long way, but so worth it!" So I keep going...and going...and going. Soon, I must admit to myself, I'm not stopping until I get to Ribbon Falls. 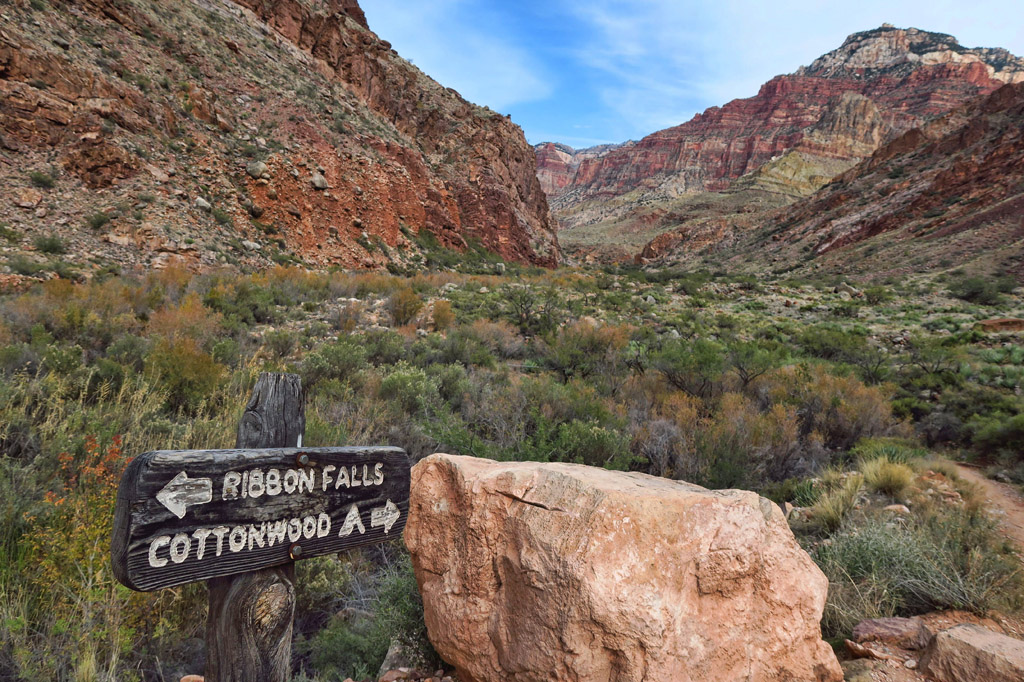 It is a beautiful hike, fairly easy with a total of 1,200 ft elevation gain. Once the box canyon ends, the walls open up to desert gardens.. Six different foot bridges zigzag across Bright Angel Creek before reaching the grotto at the base of the falls. A small dirt trail continues up behind the veil of a waterfall. 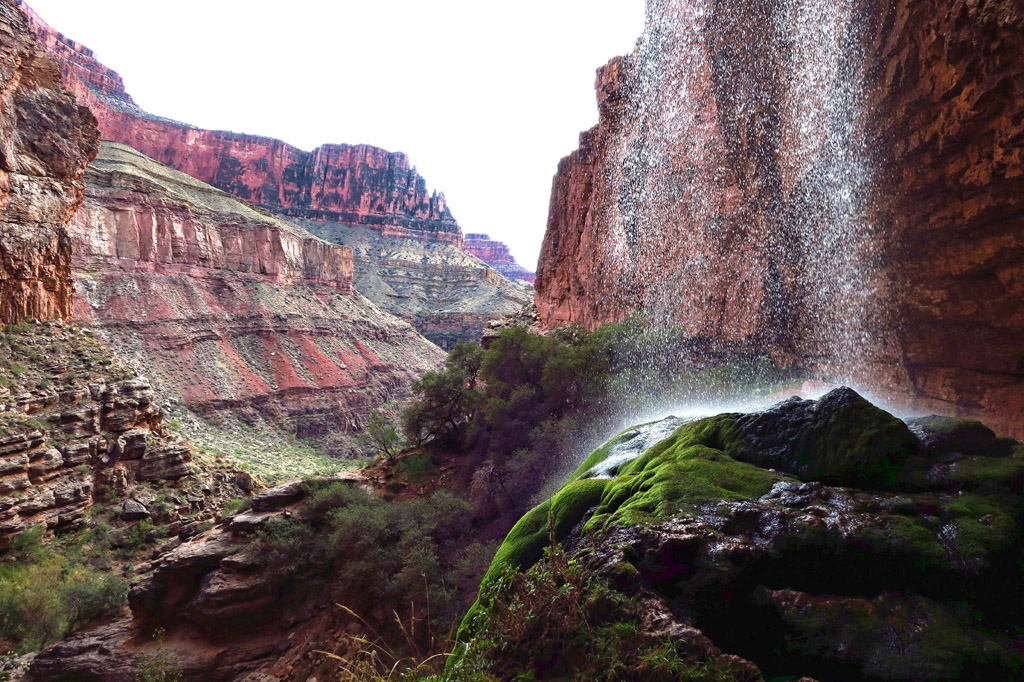 I make it back just in time for the dinner bell. Prior to each meal at Phantom Ranch, the host stands up to give a short welcome, and share a special interest story. One might talk about "a day in the life" of a Phantom Ranch employee, while another might tell of the Native American pilgrimages to sacred spots like Ribbon Falls or Phantom Canyon. But one consistent message delivered at each meal is out of five million visitors to the Grand Canyon each year, only one percent make it all the way to the Ranch. Suddenly, fifty bucks a night to sleep at our National Park's "most exclusive lodge" doesn't seem so bad, even if it is in a dorm room! 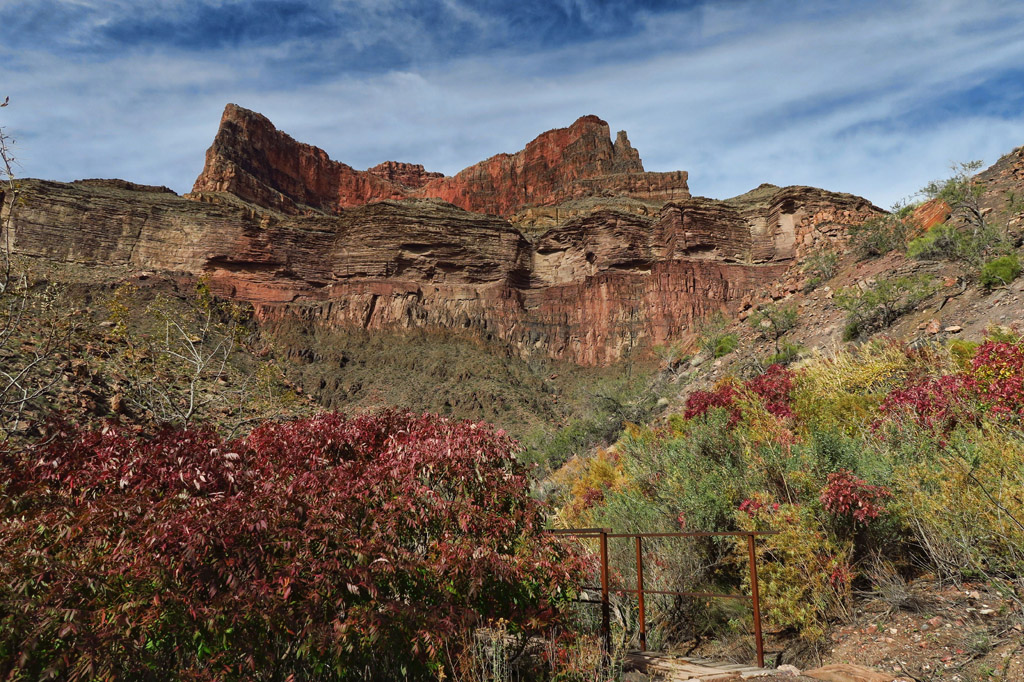 The "wake up knock" the next morning comes on the women's dorm door at 5:00am. I've signed up for the 5:30am breakfast in order to get on the trail as early as possible. The sun doesn't rise until 7:15, so this will mean hiking for about an hour in the dark. But I figure it's better to put in the dark time at the bottom of the canyon rather than risk having to hike in the dark at the top where it's covered in snow and ice. 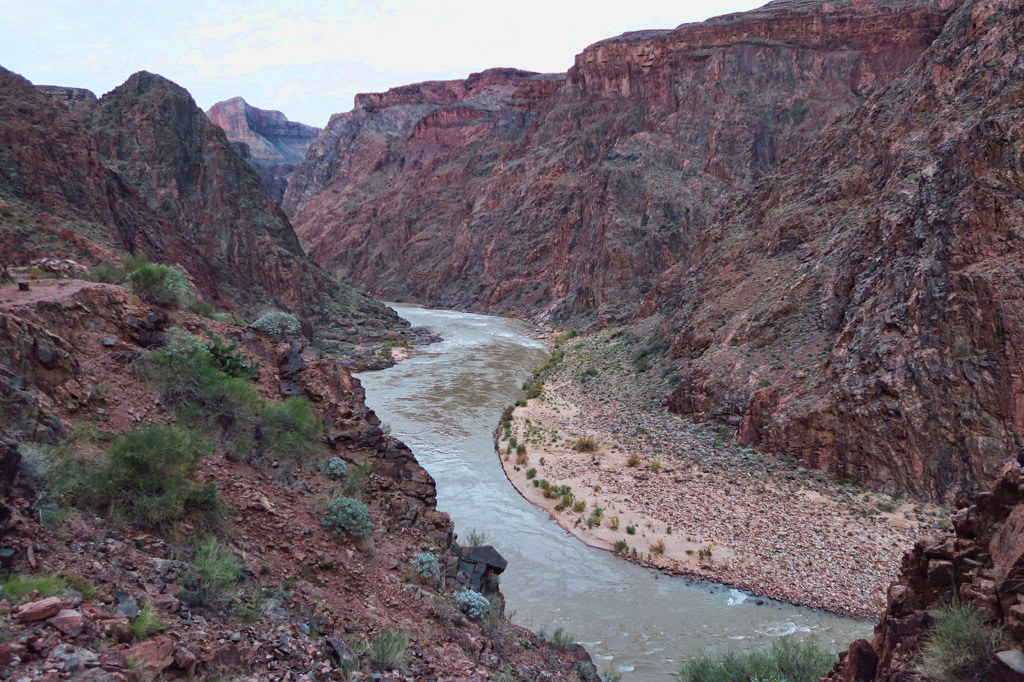 My legs and feet ache from the twelve mile hike to Ribbon Falls yesterday. I've now hiked over twenty miles in two days. In retrospect, hiking twelve miles on a day intended for rest was perhaps not my smartest move. Instead of being rested after a planned day off, I am weary before my feet even hit the floor. For a moment, I even contemplate asking if there is space in the dorm for one more night so I can really rest my aching feet this time. 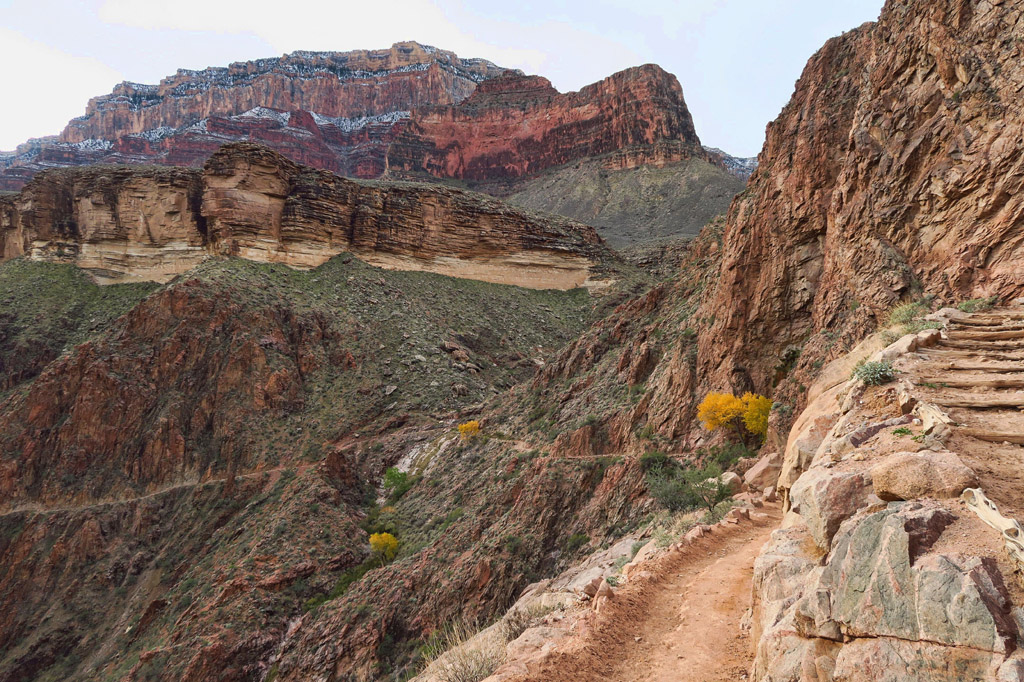 But as I lay there trying to force myself awake, I think about the speech from the dining room attendants, how only 1% of the five million annual visitors to the Grand Canyon actually make it down to the river. This is a staggering statistic, and I begin to realize how privileged I am to have the wealth of good health to make this trip on my own two feet, no matter how tired. This is an epiphany at 5:00am, and I arise motivated and excited to make the climb out of the canyon. 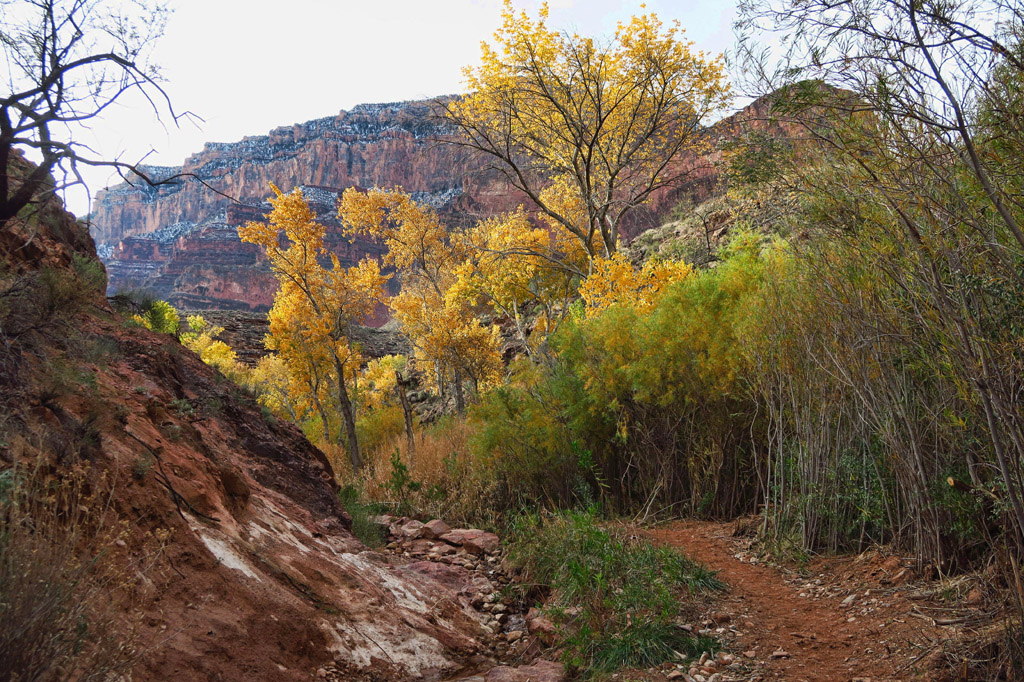 The Canteen feels electrified with the buzz of energy of eager hikers. Breakfast is a feast of scrambled eggs, bacon, and pancakes. I'm not typically hungry at 5:00am, but I know I'll need the fuel to keep me moving and keep me warm. It's a brisk 25 degrees in the pre-dawn hour as we file out of the dining room, heavy boots echoing on the wooden floor, headlamp beams pointed toward the trail. 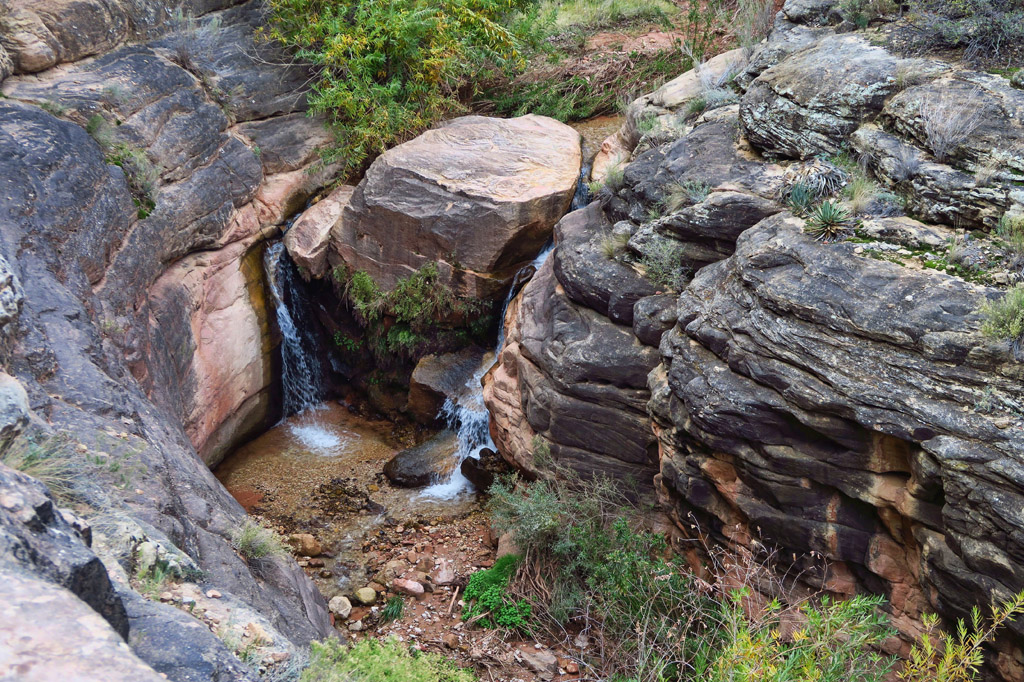 It's still dark when I begin watching for the signs toward the Bright Angel Trail. My headlamp illuminates the fog on my glasses from the vapor billowing upward as I exhale. It's a bit eerie hiking alone in the dark, particularly after I unknowingly pass the mule pen when one of the mules snorts, fluttering his nostrils, scaring what little daylights I had out of me.

But soon, the sky begins to lighten, turning from inky black darkness to steel gray. Although I hate getting up in the mornings, I have to admit this rapid change of morning light is one of my favorite times of day, albeit infrequently seen. 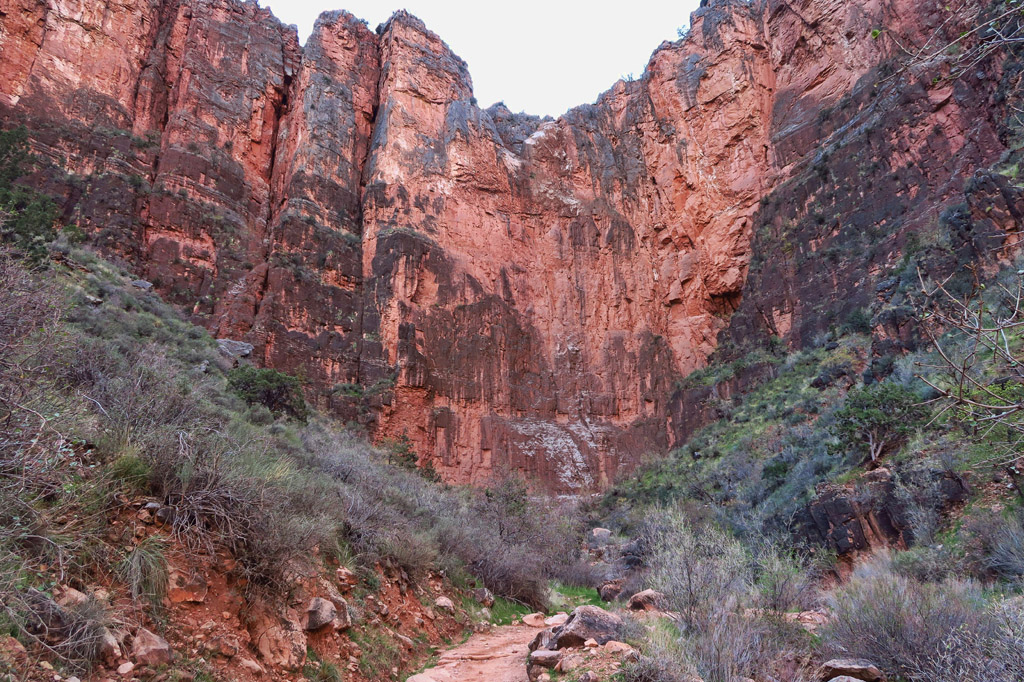 The Bright Angel Trail crosses the Silver Bridge, then doubles as the River Trail for the first mile, running parallel to the Colorado River, slowly rising in elevation as the river appears to grow smaller. I take the first opportunity for a rest stop at the River Resthouse, the 1.5 mile mark along Pipe Spring before the trail turns away from the river and begins the increasingly steep ascent toward the "Devil's Corkscrew."

I had not anticipated the Bright Angel Trail to be so scenic. I read that it was a maintained dirt trail up a side canyon, used as the primary mule route, "graded for stock." So I expected muddy switchbacks and a more limited views and sparse vegetation. But hiking up through the Bright Angel Fault alongside a creek proves to be beautiful, and such a different scene than the South Kaibab trail. There are golden cottonwoods along the babbling brook, so scenes of water and lush vegetation tucked into tight, pancake-rock canyons is an inverted view to the wide open spaces of the South Kaibab ridgeline trail.

I read if one hikes from rim to rim, they have covered all the ecological life zones in North America, the equivalent of going from Canada to Mexico. Geological descriptions talk in terms of "billions" of years accounted for in the multiple layers of rock, nearly forty different layers, from the 2-billion-year-old Vishnu Schist at the bottom of "The Box," layer by layer, a mile up to the 230-million-year-old Kaibab Limestone on the Rim. 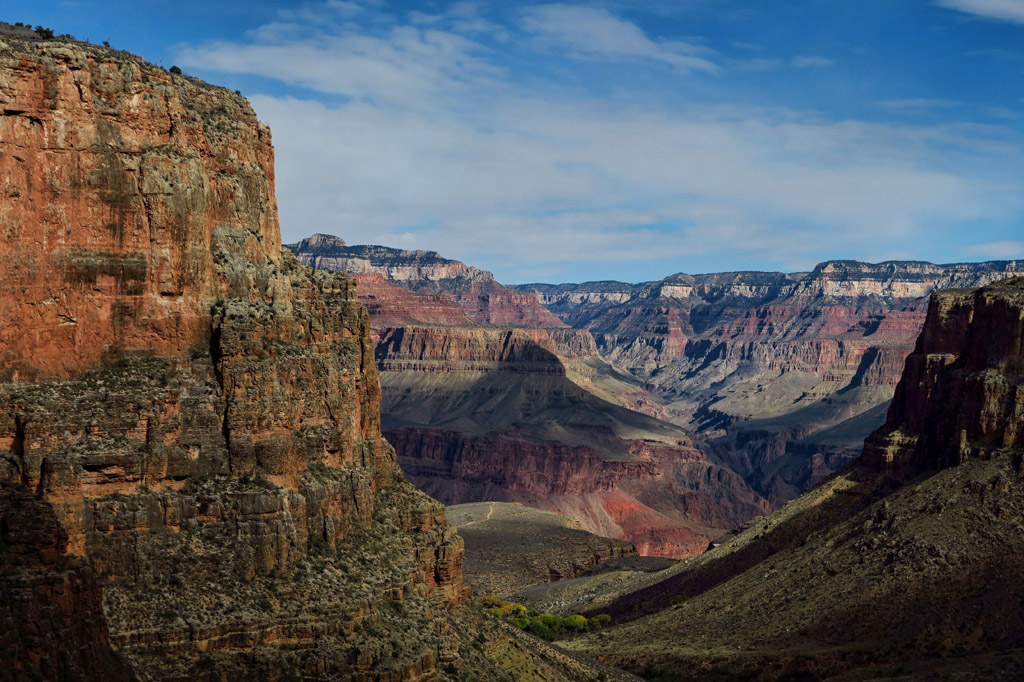 By the time I reach the halfway point, Indian Gardens, I have stripped down to a long sleeved shirt with the sleeves shoved up above my elbows. But Indian Gardens is a milestone of another sort. It's cold here in the shade. Like shivering cold. Before I delve into my sack lunch, I layer up once again, thinking how the cool shade and availability of water must make a nice respite for hikers during the intense heat of the summer months. 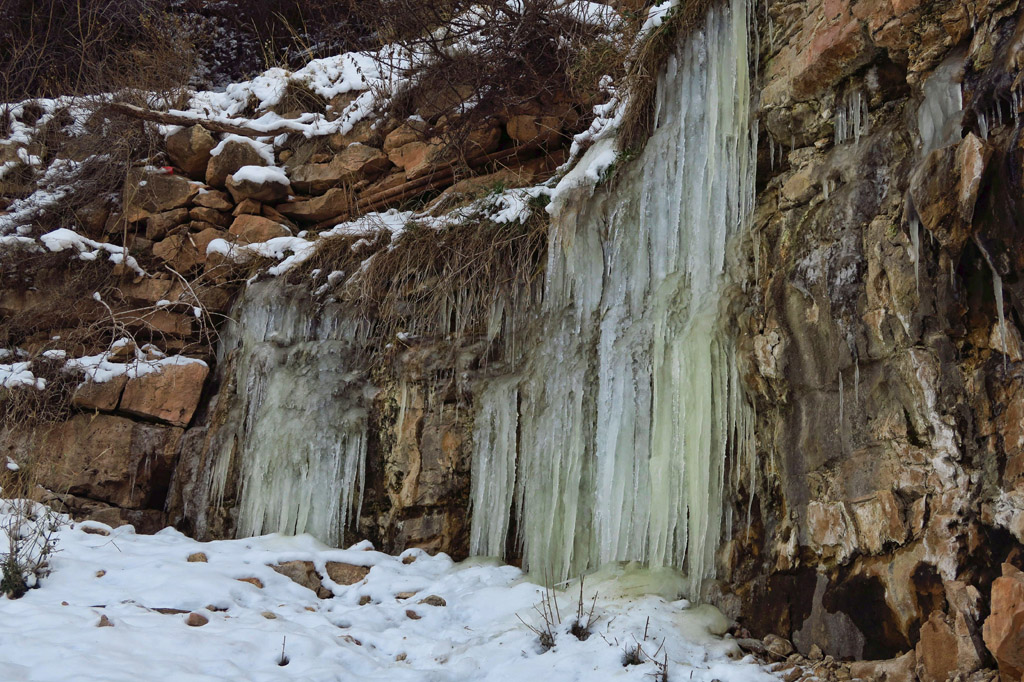 The second half of the trail is definitely the steepest. As the trail becomes more tedious, the switchbacks endless, I face the walls of the canyon head-on, staring them down with each turn. The milestones help give me a goal which I need mentally more than I do physically. Conversation with other hikers takes my mind off the monotony of the switchbacks, as does a fully charged ipod. 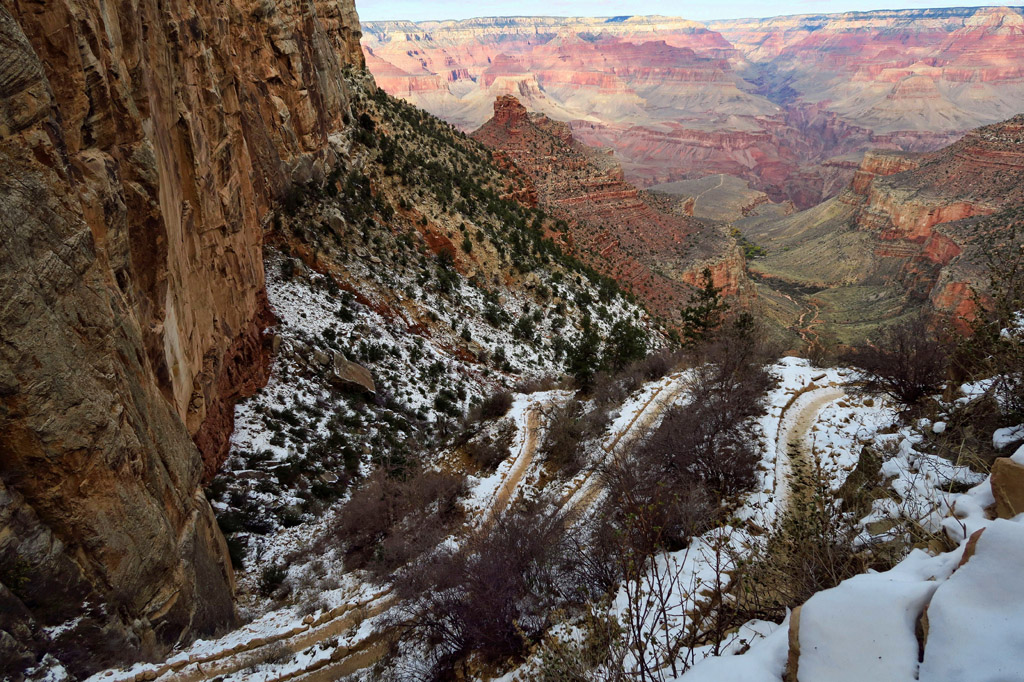 It's the first glimpse of the historic Kolb Studio, perched on the rim that tells me the end is near. It's a sight that takes my breath away to realize not only have I made the 10 mile, 5,000 ft elevation climb before dark, but I am still smiling. I give my newly acquired friends from the trail a hug goodbye at the rim, and head back to the Winnie, still parked in the Backcountry Information lot. An initial check indicates she has survived the cold unscathed, so I head for the lodge for a pizza and a cold draft beer! 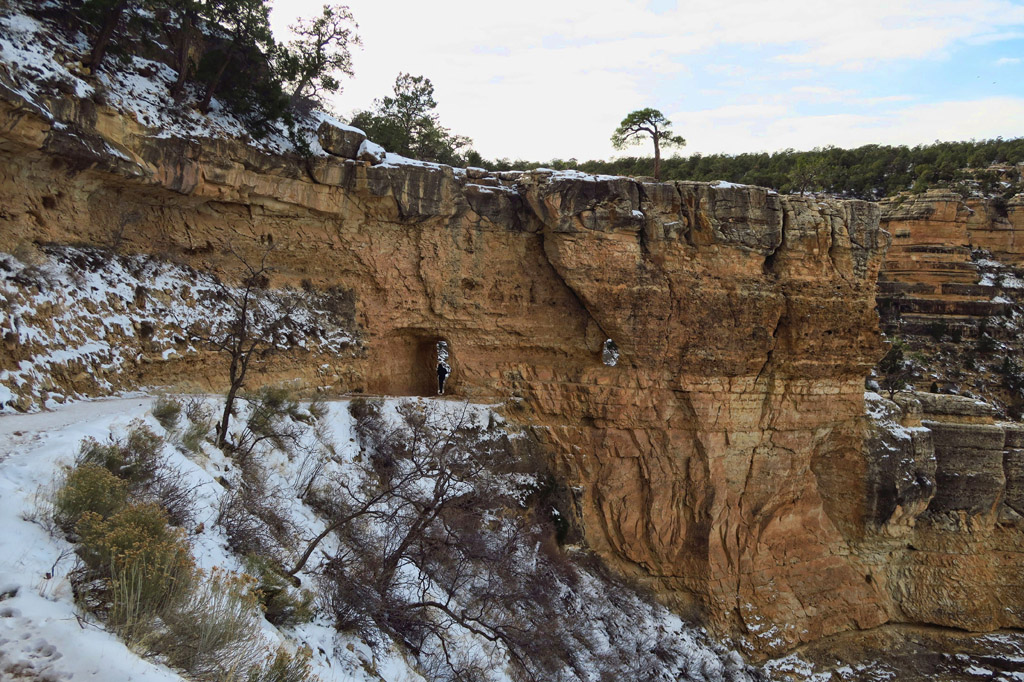 Three days ago, when I first arrived to the Backcountry Information Office, I read on an information board a phrase, "...you will be left with one of two reactions: either you will never hike again in your life, or you will find that your life up to this point has been meaningless and you will be forever enslaved by thoughts of returning to this torturous paradise." I wondered which it would be for me. Would I be enslaved with thoughts of returning?