On a whim during my recent southerly winter migration, I decide to attempt another long time bucket list item; a solo hike to the bottom of the Grand Canyon. While on hold with Xanterra reservations, the recording states they are now accepting reservations 13 months in advance. Fat chance, I figure. I start the call by saying "I realize this is a ridiculous long shot, but..." I am shocked out of my socks when the reservationist replies, "We just had a cancellation for two nights in the woman's dorm next week..." I jump to my feet and grab my credit card.

A check of the weather forecast for the South Rim reports an "arctic blast" on the way, bringing nighttime temperatures down into the low teens. But the bottom of the canyon where I'll be staying is typically 20 degrees warmer. Highs should be up into the 50's at Phantom Ranch. With no wind and lots of sun in the forecast, it could be perfect hiking weather. I won't have to worry about myself...only about my Winnie View, left behind on the icy canyon rim. I spring into action with winterization, borrowing an air compressor to blow out the water lines. I dump the tanks, add a gallon of RV antifreeze to the holding tanks and P-traps, and hope I've covered all the bases.

The drive toward the South Rim grows increasingly challenging the further east I go toward higher elevation. The arctic blast overtakes me, bringing with it sub-freezing temps and sideways blowing snow. One interesting tidbit about the National Parks, they do not use any traditional methods toward deicing roads. No salt, no chemicals, only mechanical means such as plowing, but otherwise it's strictly left up to the sun. 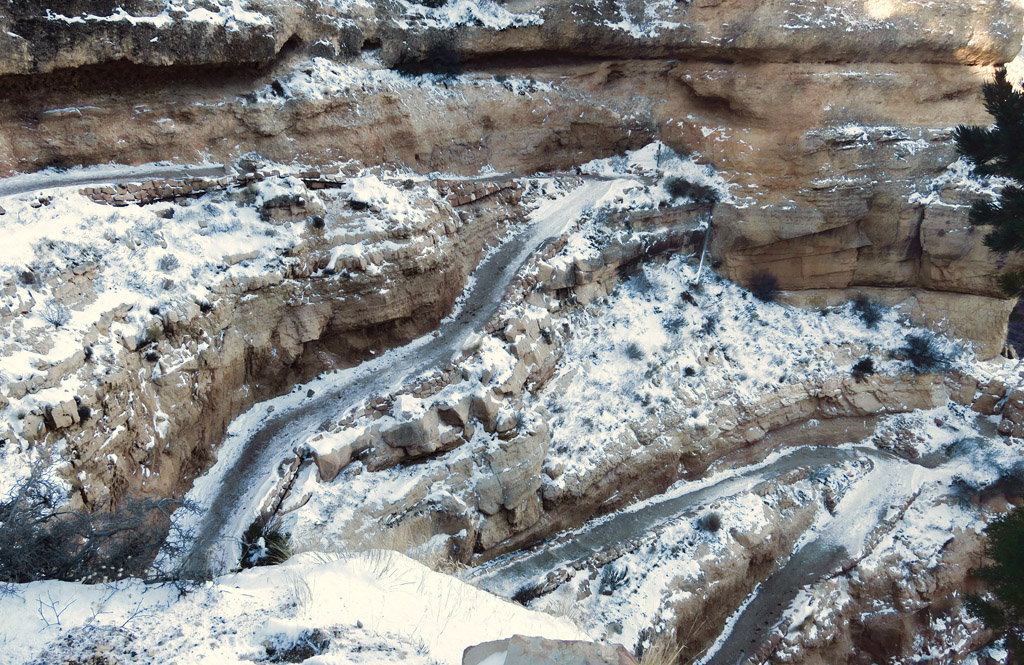 The hour drive on Highway 64 is clear of any ice, but once I drive through the park gate, it's a different story. Thankfully, there are only icy patches where the roads are shaded. I creep along below the 25 mph speed limit, and pull safely into the parking lot of the Backcountry Information Office, where I plan to leave the Winnie for my hike down into the canyon. There are two large lots, one even having designated RV spaces. The lots are less than 1/3 full, so I find myself a nice secluded, level spot, and prepare for my coldest night yet without hookups on the canyon rim.

It's eight degrees when I wake up in the Backcountry Information Office parking lot on the South Rim of the Grand Canyon. Even Siri says "brrrr!" I am relieved to see there's not a cloud in the sky. My windows and overhead skylight are coated in a prism of sparkles as the sun shines through the ice crystals.

There are three Hiker's Express shuttles that go directly from the Backcountry Information Office to the South Kaibab Trail at 7:00am, 8:00am, and 9:00am. I figure I will shoot for the middle shuttle, and that will still allow me one other chance if I miss it. The ride down the Desert View drive is beautiful with the morning sun glinting on the blanket of snow lining the roads. Sounds are muffled, both outside from the snow drifts, and inside from the dozen hikers bundled tightly in puffy jackets, hats, gloves, face warmers, and neck gaiters. Its 20 degrees when we unload at the South Kaibab trailhead. 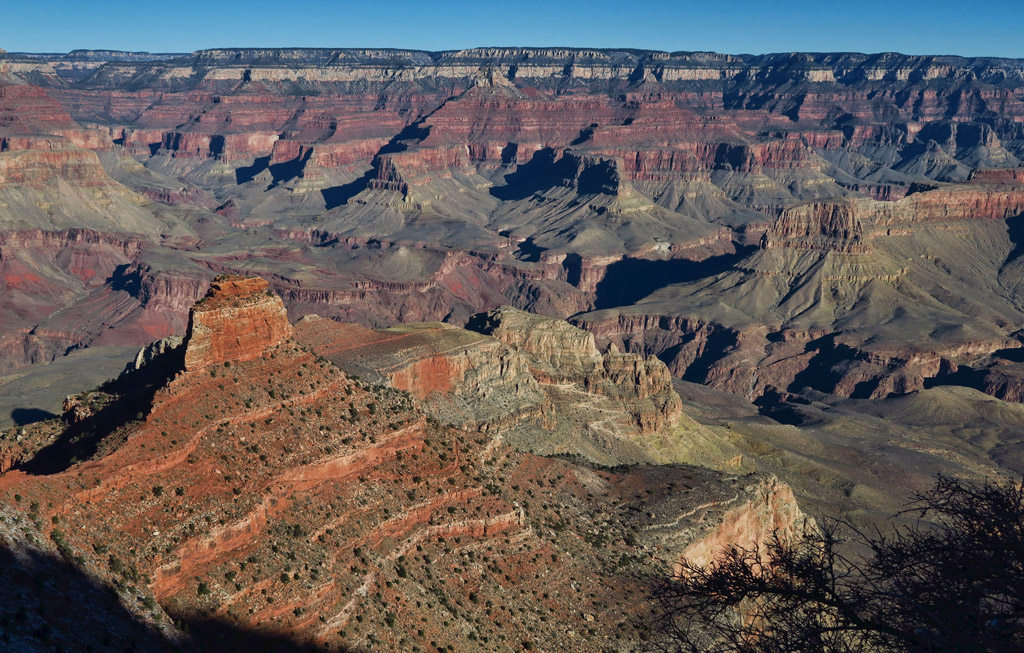 Hikers are hunched over their boots at the start of the trail, attaching their micro-spikes and crampons. I look around to survey the group noticing that every single hiker is equipped with some kind of anti-skid device. I reflect back to my own purchase of "YakTraks," which seemed like overkill at the time of purchase back in 70 degree Lake Havasu. But as I strap the wire-coiled mesh onto the bottom of my hiking boots, I am grateful for whatever inspired the purchase, as without them I'd literally be "skating on thin ice!" 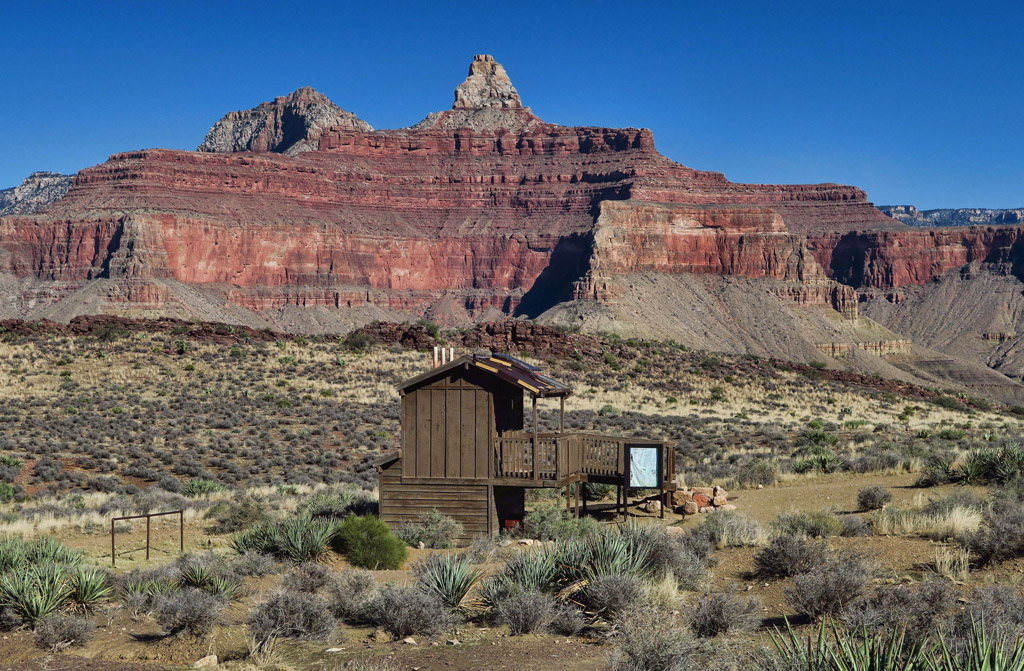 Like most hikers, I've opted to descend into the canyon via the South Kaibab Trail and exit out the more gradual Bright Angel Trail. At only 7.1 miles to Phantom Ranch, the South Kaibab Trail is a shorter route to the bottom. However, a drop of 4,860 ft in elevation also means a much steeper route than the longer Bright Angel Trail. It will be a steady day of switchbacks, stairs, and deep knee bends. 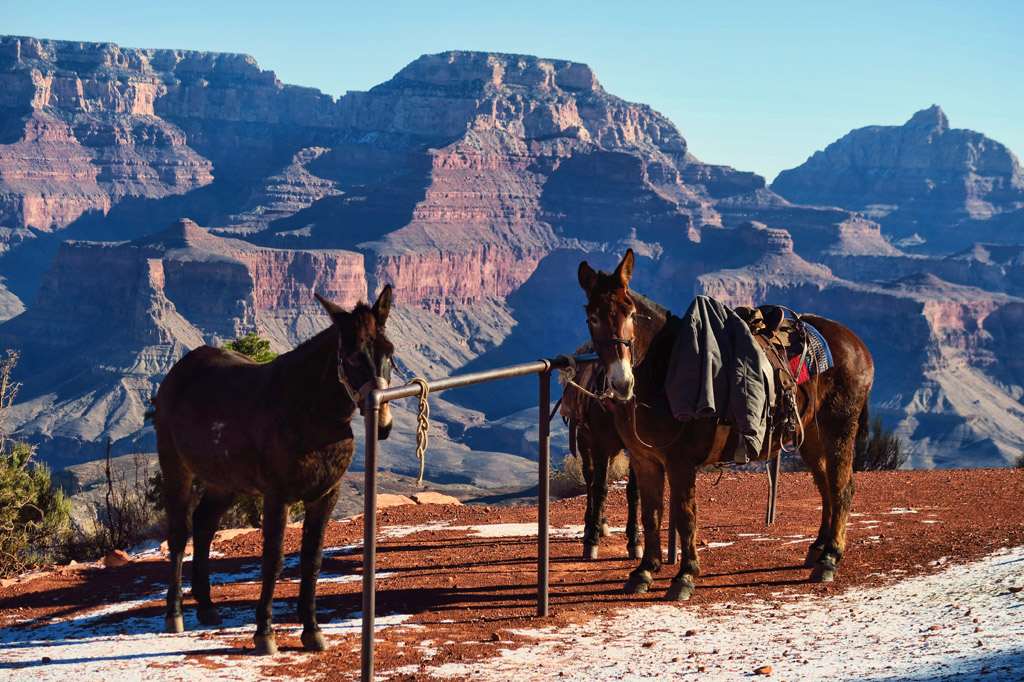 Another bonus of the South Kaibab Trail is its path along the ridgeline as opposed to a side canyon, offering unobstructed views that unfold at each turn. According to the NPS brochure, it offers "panoramic views unparalleled on any other Grand Canyon trail."

I'm on the trail by 8:20am, and already I can feel the sun warming my cheeks, the only exposed skin on my body. Vapor billows out with every exhale. There is no wind, and not a cloud in the sky. I barely feel the effects of the below-freezing temperature, and it's not long before I shed my fleece headband and gloves. 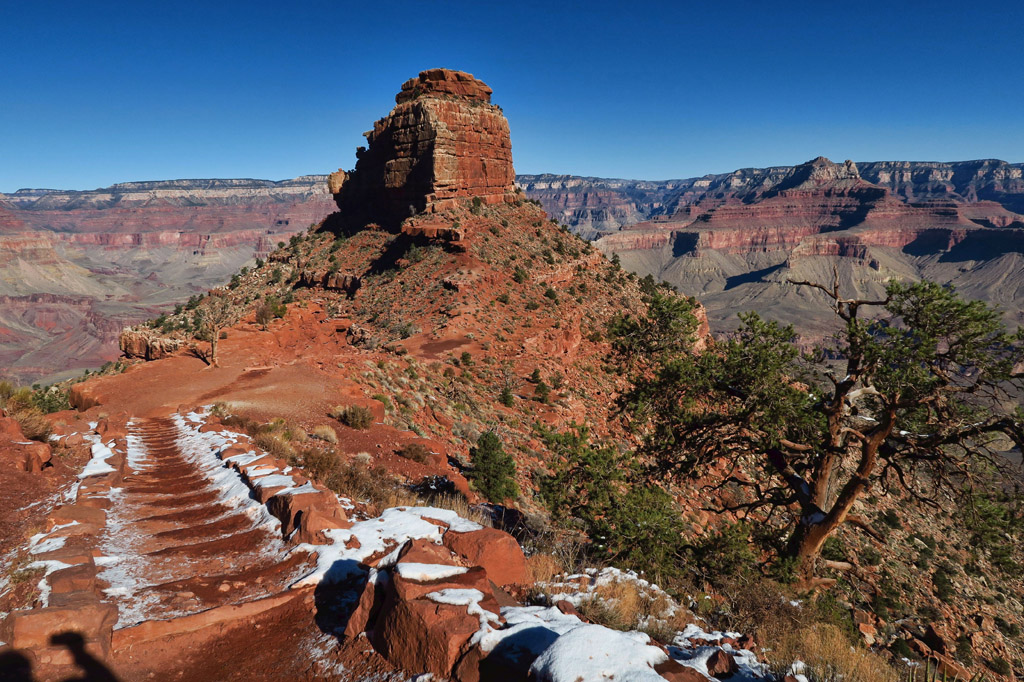 Landmarks along the way help me gauge my progress, the first being "Ooh Ahh Point," the most dramatic panorama looking down across 270 degrees of sweeping canyon views. Cedar Ridge is next at about 1.5 miles, a popular stop for the mule trains, and the last sign of any snow or ice along the trail. I stop here to remove my YakTraxs, already caked in mud from the now melting snow. Skeleton Point marks the three mile mark and the recommended turn-around point for day hikers. From this point, the trail becomes a grueling set of steps down switchbacks that seemingly have no end, murderous on the knees. But eventually it levels out to the Tonto plateau, as indicated by the rest stop named "Tip Off." 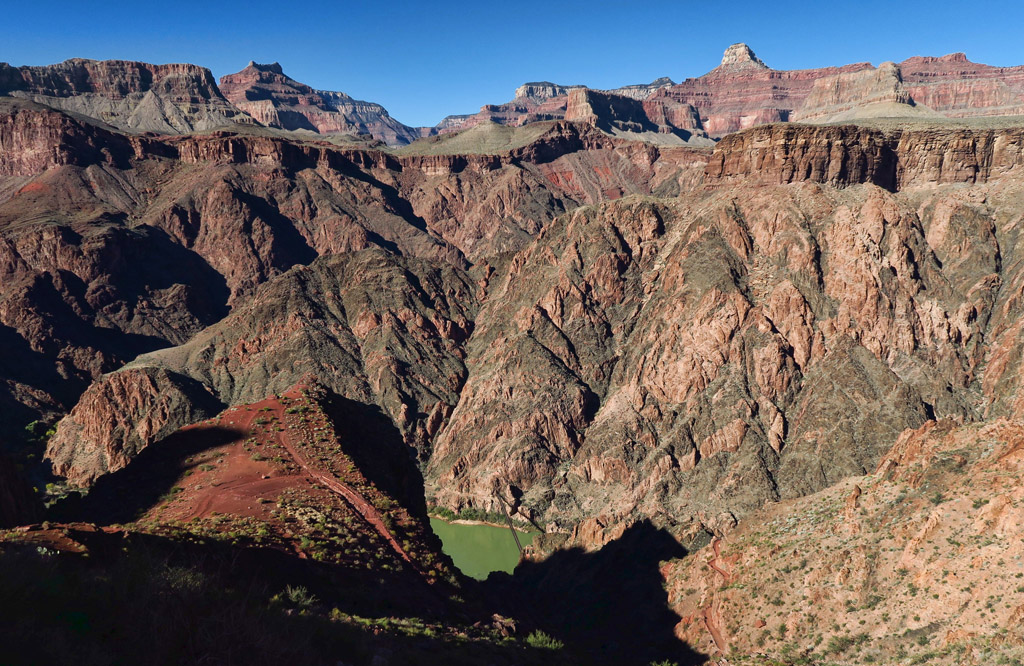 I reach an unmarked bend in the trail when I finally get a glimpse of that green sliver of a river, the Colorado. For the first time, I feel like I am getting close. A later view reveals a tiny thread-like structure across the river, the suspension bridge, which puts the distance to the river in perspective. I still have a long way to go. 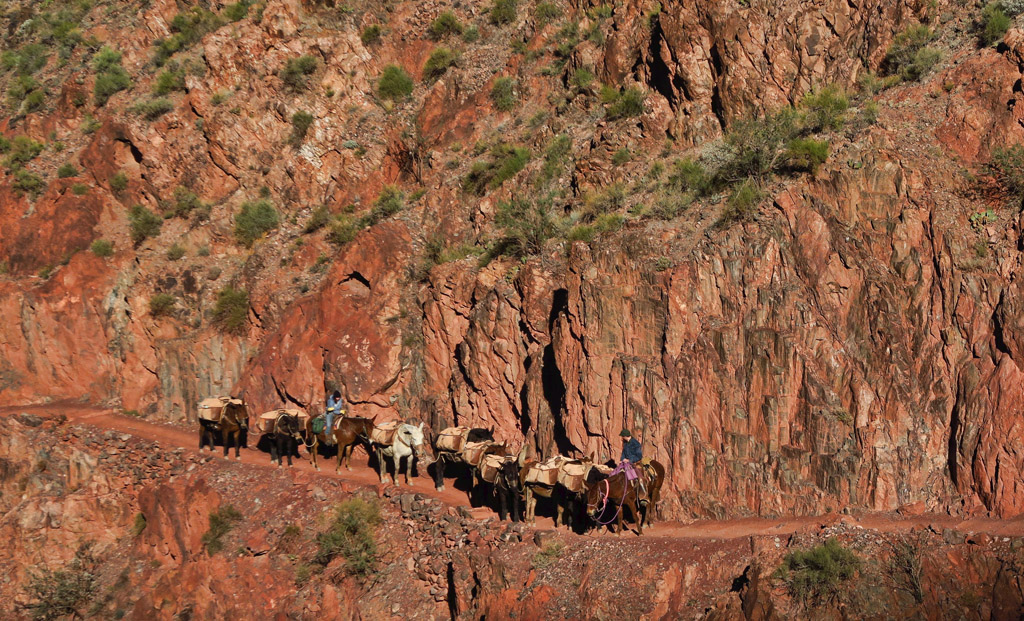 Still, reaching the river at the bottom of the canyon, the reason for this massive geological cathedral that surrounds me, is thrilling. I can hear it as soon as I see it, dodging shallow rocks while swirling around deep eddies. Once I finally reach the "Black Bridge," accessed by a tunnel blasted in the rock, I am in awe. 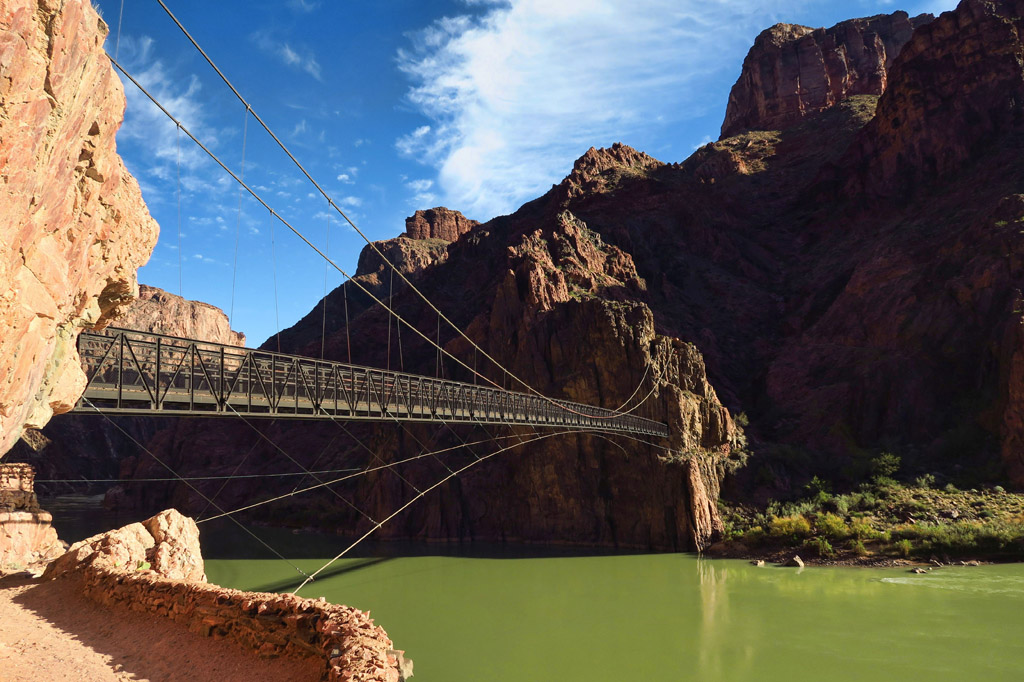 An informational sign at the base tells about the bridge, built in 1928 to replace a one-mule cage cable car; "Much of the work was accomplished at night under floodlights in attempt to escape the summer heat. The eight main cables, each 550 ft, could not be loaded on mules. They were carried down on the shoulders of men."

Once I reach Bright Angel Campground beneath the golden Cottonwood trees, I know I'm almost there, though it's still another quarter mile to reach Phantom Ranch. It's now 3:20pm. The time estimates for the South Kaibab descent are "4 to 6 hours." It has taken me seven. But I've stopped to chat with hikers, mule drivers, taken over 200 photos, eaten two meals, and just stood and basked in the magnificence that surrounds me. Why would anyone want to hurry through this hallowed canyon? 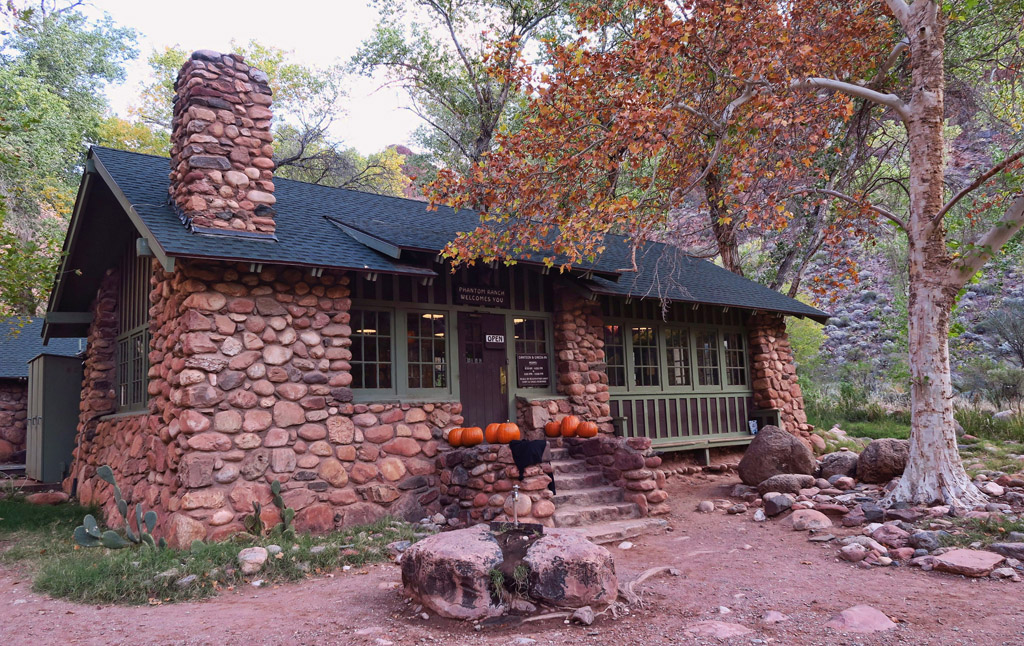 I make it to Phantom Ranch's Canteen in plenty of time to down a couple of Bright Angel IPAs before they close at 4:00pm to prepare for the evening meals. Upon check-in, Kate, the bartender/hostess/receptionist/and single-handed wait staff tells me to go to the dorm first to secure my spot. "Pick any available bed that has a towel folded on it." It's late in the afternoon, so I think I'll be lucky if I can secure a lower bunk. I am surprised to enter the dorm room to find all 10 beds still up for grabs. I take the one at the far end of the room in a small alcove, offering a bit more privacy.

The dorm rooms are each equipped with a toilet and hot shower, a small towel and a lone dispenser of body shampoo. At $50 a night per bed, one might think they should offer a few more luxuries, but when you consider that everything from the clean sheets to the staff that make the beds must come down over seven miles by mule or by foot, the price seems reasonable. 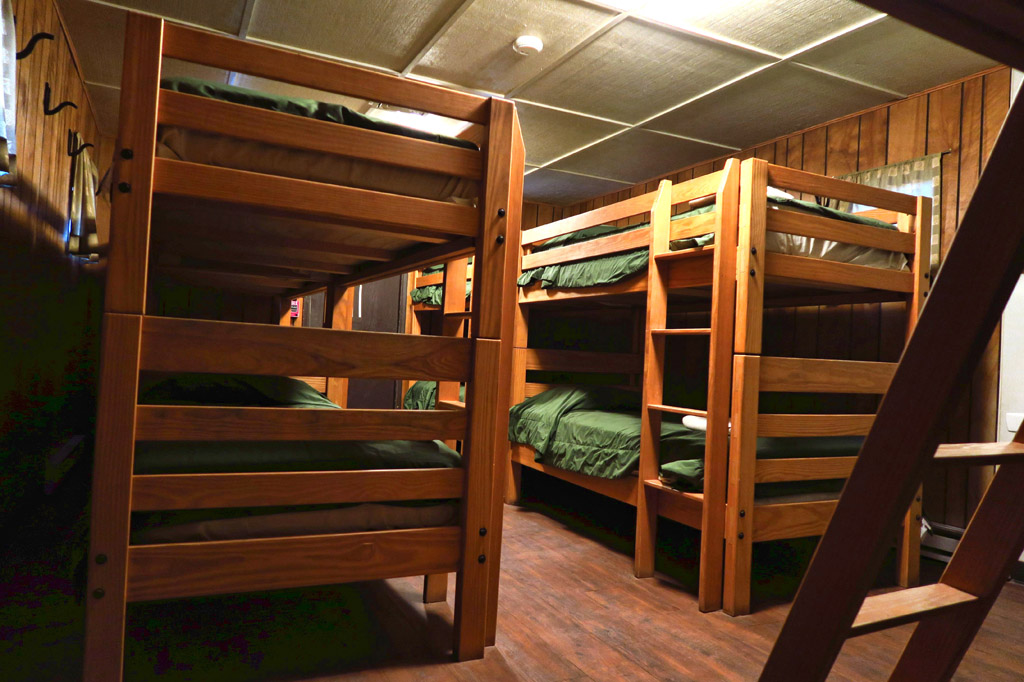 But if fifty bucks seems like a lot to pay for a 10-person dorm room, you should see the price for dinner! It costs me as much for a steak dinner as it does a good night sleep. But oh, let me tell you....it's the best steak dinner I can remember in months!

There are two meal shifts each day, the early breakfast at 5:30am, and the "late" breakfast at 7:00am. Dinner is also served in two shifts. The steak dinner is served at 5:00pm, while Hikers Stew seating is at 6:30pm. All meals are served family style. And if you think food tastes better on a camp-out, you should sample the fare at the bottom of the Grand Canyon! The steaks are seared to perfection, while the Hiker's Stew is sublimely seasoned. Add to that the anticipation of hearing the dinner bell "clang" after a full day of hiking, and well, it can cause salivation like Pavlov's dog! As the MasterCard ad says, "Priceless!"