If you've never visited Hot Springs National Park, let me attempt to explain what it's like. Hot Springs is like when you're on a road trip and you drive through a small town in the middle of nowhere that's probably full of history and culture but it only takes roughly 60 seconds to drive through so you don't stop, and then you find out the small town was actually. . . a national park.

Huh? Exactly. It's so weird.

We've visited quite a few national parks and none has been as confusing to learn about and navigate quite like Hot Springs.

Like most national parks, following the GPS directions will probably take you to the wrong place (Oh yes, our 33-foot Brave pulled a nice u-turn on a two-lane country road). And depending on what area you're driving in from, it might feel a little sketchy, or like you're in the middle-of-nowhere Arkansas. Don't worry, you're almost there.

We camped at Gulpha Gorge, the one actual campground in Hot Springs National Park ($10 a night no hook ups), but isn't nearby the bathhouses themselves. It's a quick 10 minute drive over to the bathhouses.

There are great hikes that start at the campground, but (and this is a huge but) the trail to Bathhouse Row literally dumps you out on the road. So don't plan on taking this hike with children or pets. We turned around and decided to take the car for safety. (There is plenty of free parking downtown anyway).

I've visited hot springs in Alaska and Canada, so I expected Hot Springs NP to be similar: a large outdoor pool surrounded by rocks and nature with lots of steam floating into the air.

Hot Springs has Bathhouse Row, which is exactly what it sounds like. Buildings with baths inside. (I don't mean to sound anti-climactic here, they are really cool and beautiful. Just don't expect an outdoorsy experience). This makes it the perfect national park for someone who isn't thrilled about the outdoors.

There are a few main bathhouses--one has since been turned into an awesome brewery--but let's start with Fordyce. 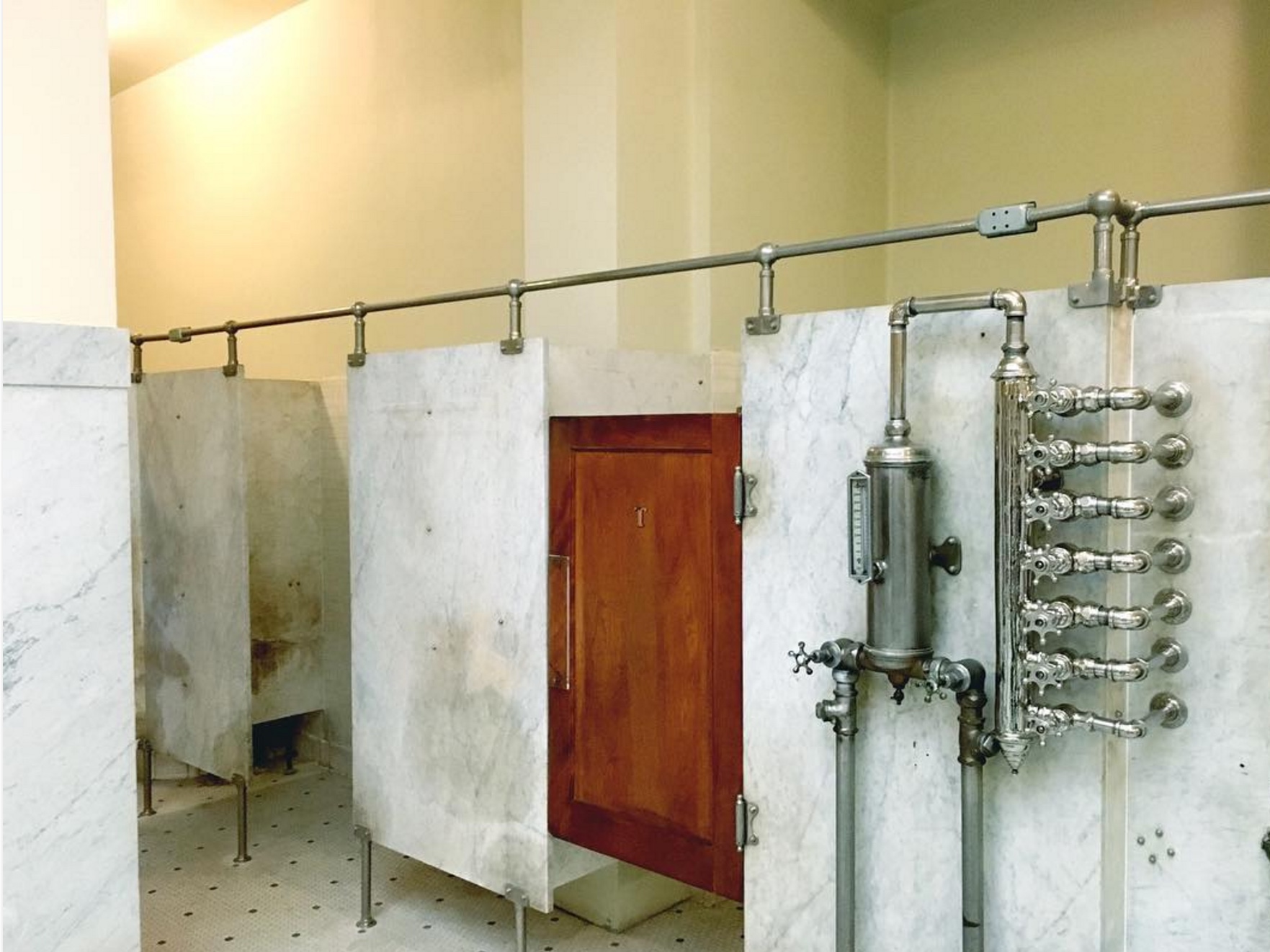 Fordyce Bathhouse is the visitor center. They play a video twice every hour explaining how people came to hot springs initially, how the waters were (are?) believed to have healing powers, and how the Army ended up building a road on top of a creek so the bathhouses were more accessible. (This is my interpretation of the video. I still can't figure out if the road was a good thing or a bad thing.)

You can tour Fordyce at your own pace or with a park ranger and see what the baths were like back in the 20s & 30s when they were at the height of popularity.

Here I should note two things:

The Arlington Resort Hotel & Spa (which has it's own bathhouses) is on the corner of Bathhouse Row. Capone rented out the entire 4th floor every time he was in town (with his "family") and you can tour (for free!) the Al Capone suite. His room had a back exit through a closet, just in case things got a little hairy.

Okay, back to Bathhouse Row.

After touring Fordyce, learning the history, and seeing all the old spa treatments that definitely looked like they could've killed people (i.e. electric baths, this was a thing), I recommend grabbing a beer or snacks at the Superior Bathhouse & Brewery. I don't drink beer, but they have rootbeer floats. Need I say more?

Alright, now you're ready. It's time to bathe publicly. I know, that's what they called it back in the old days: public bathing. Yuck.

But it's time to indulge in the baths and you have two main options in the National Park: Buckstaff Bathhouse or Quapaw Baths and Spa. Choose depending on your level of modesty. 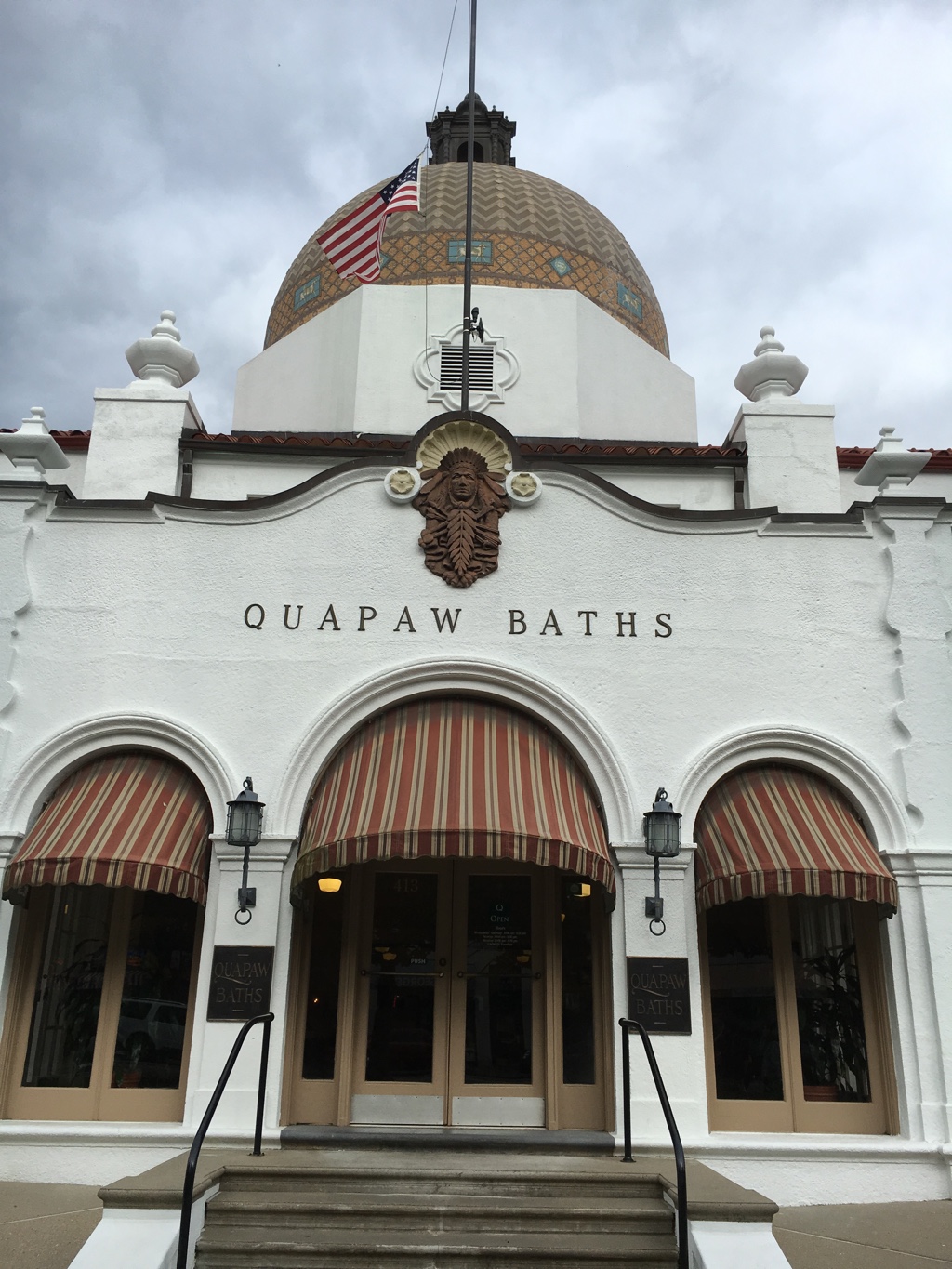 Let's start with Quapaw first: Imagine four indoor hot tubs, all varying in temperature from 98-104 degrees. It's a pretty straightforward modern spa experience. All you need are flip flops and a swim suit. (There are also lots of private spa options here.)

But then there's Buckstaff which is a first come, first serve traditional bathing experience. Now, we didn't opt for this option because we're not that brave. But here's what it involves:

I'm certain at least half of those are ancient torture treatment devices, so I wasn't brave enough to try it out. But I heard from friends that it was amazing, relaxing, and only mostly awkward. To each his own.

Now after you've bathed, there's lots of places within walking distance: the Gangster Museum of America, shops, restaurants, and everything else you expect in a tourist hotbed.

But perhaps the coolest (or hottest, really) part of Hot Springs are all the fountains and pools around the area that offer up their steam. Plus, as part as some government contract from years ago, Hot Springs is required by law to give away their mineral water for free for drinking. So bring a couple gallon jugs to fill up (and then wait a couple hours because it's too hot to drink).

And if you didn't read all of that, here's the 3 things you must do:

Oh, and the baths do cost, but there is no fee for entering the park. So having a National Park Pass isn't necessary.