6 Reasons You Have to Visit Crater Lake NP

I underestimated Crater Lake National Park... by a longshot.

I wasn't sure what to expect when we rolled into the park earlier this summer. Alyssa had shown me photos and talked about visiting Crater Lake National park for a long time. I'd also seen it from an airplane while flying over it earlier last year (it looked like a big hole in the ground with water).

But it was so much more.

Crater Lake was the most interesting and unique national park I saw during 2016.

While we just spent a couple days in the park, it was plenty of time to fall in love with one of the most coolest places I've ever seen. If you find yourself up in Oregon during the summer (or when there isn't piles of snow at Crater Lake), you have to stop for a quick trip to the park.

1. The Caldera is Unlike Anything You've Ever Witnessed.

Crater lake is the deepest lake in America (1,949 ft at it's deepest point) and was formed by a collapsed volcano over 7,700 hundred years ago. On a sunny day while taking a boat tour, you can see over 100 feet down into the water. 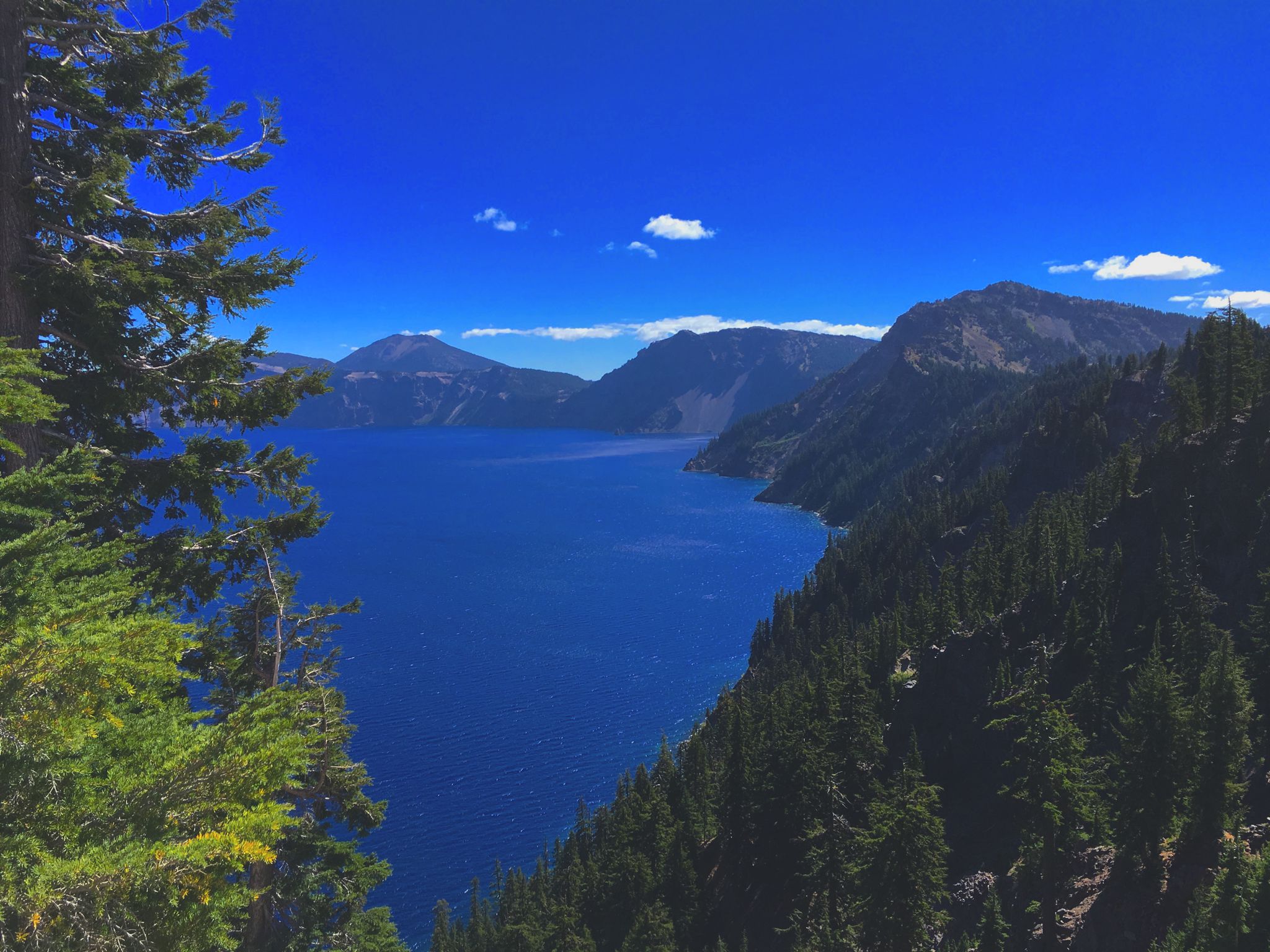 What blew me away about Crater Lake is just how blue the water looks from the moment you lay eyes on it. The water at Crater Lake is so blue because of it's depth and clarity. Photos do not do it justice, it's something you have to see in person. 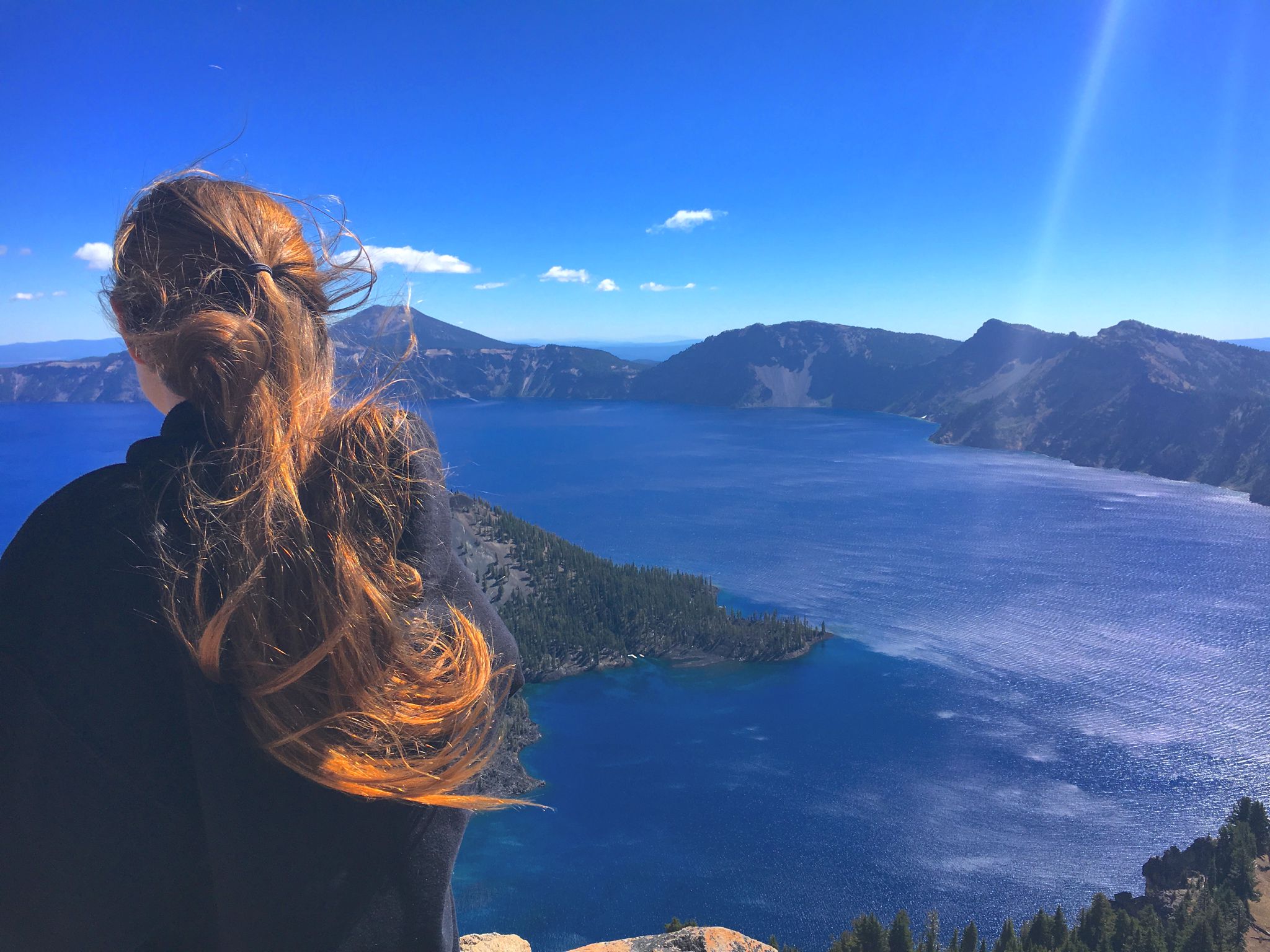 Crater Lake actually has no streams, springs or bodies of water that flow to or from it. 100% of the water in Crater Lake is from the yearly average of 66 inches of rain and 44 feet of snow that fall into it each year.

This means that the deepest lake in North America has no water flowing into it! This blew my mind.

When you're standing over the lake, it's hard to believe that all of the water inside comes from precipitation.

4. Crater Lake Has Some of the Cleanest Air in North America.

On a clear day at Crater Lake National Park you can see up to 150 miles away! This provides for exceptional views of the surrounding Cascade Mountains. If you're feeling cooped up in a city, it won't take long to re-energize here in the park.

5. You Can Cozy Up Next to a Fire in the Middle of August. 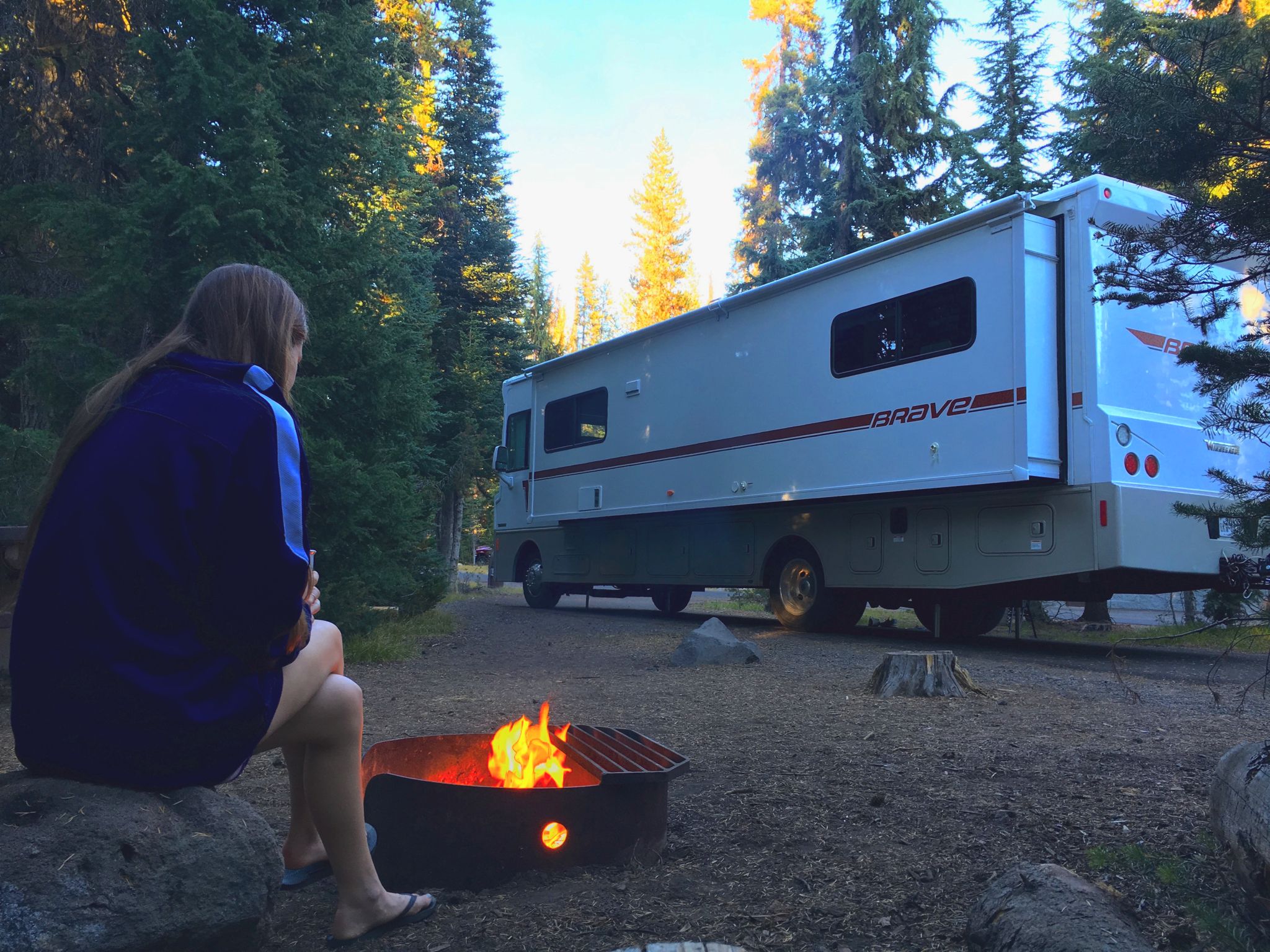 While we were at Crater Lake this summer the temperature hit 32 degrees overnight. After spending a month in Portland where we consistently saw 90 degree days, a chill evening next to a fire was perfect.

Crater Lake receives snowfall during every month of the year and is typically covered with snow for 8 months each year.

6. You Can See Most of the Park During One Weekend. 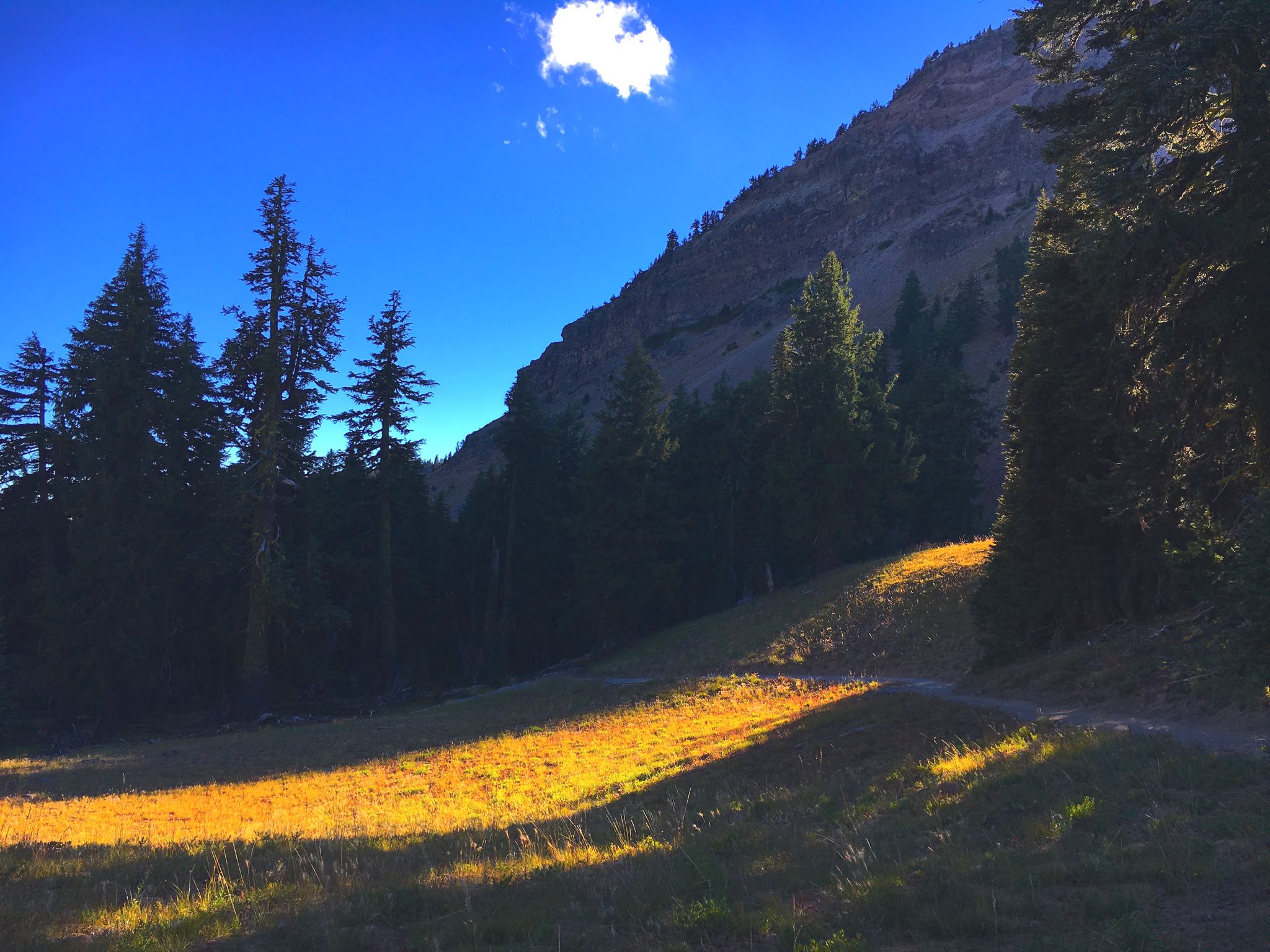 Unlike many national parks (such as Big Bend National Park) where you can spend weeks and barely cover a portion, Crater Lake can be thoroughly explored over a couple days.

While the park spans over 180,000 acres, most park attractions are centered around the caldera of Crater Lake itself. After spending some time marveling at the beauty of the lake, you can explore multiple rim trail hikes with stunning views of the water.

Because of the small size of the park and relative ease of the hikes, we knocked out three hikes in less than 24 hours. Just remember: the entire park is at least a mile high, so you'll want to drink plenty of water.

Following the recommendation of the park ranger, we chose to hike Watchman Peak, a 1.6 mile roundtrip hike that leads to the top of a historic fire lookout and provides incredible views of Crater Lake itself. The day we visited was already cold with strong gusting winds, but climbing to 8000-foot made this windy hike incredibly difficult and rewarding.

You can check out the views from the top of Watchman Peak (and other beautiful sites from Crater Lake) here on our vlog.

Crater Lake National Park was supposed to be just another park we crossed off our adventure list this year. However, it turned out to be one of my new all-time favorites.

If you plan on visiting Crater Lake National Park this year, here are a few tips from our visit:

At 6,000 ft elevation, the park cools off quickly and the roads are often closed through June due to snow and ice.

I'm glad I decided to do my homework and read some forums before showing up at the park. Driving in from Portland, Google Maps had us taking the most direct route to the park campground (which was around Rim Drive of Crater Lake). Rim Drive is fairly narrow with drop offs on both sides. Plus, for much of 2016, this road was under construction.

With our 33-foot rig plus our tow car, we played it safe and took the longer route via OR-230 & 62 to avoid Rim Drive. If you're worried about your rig length entering the park, you can read this forum or call the ranger station to ask if you can make it. 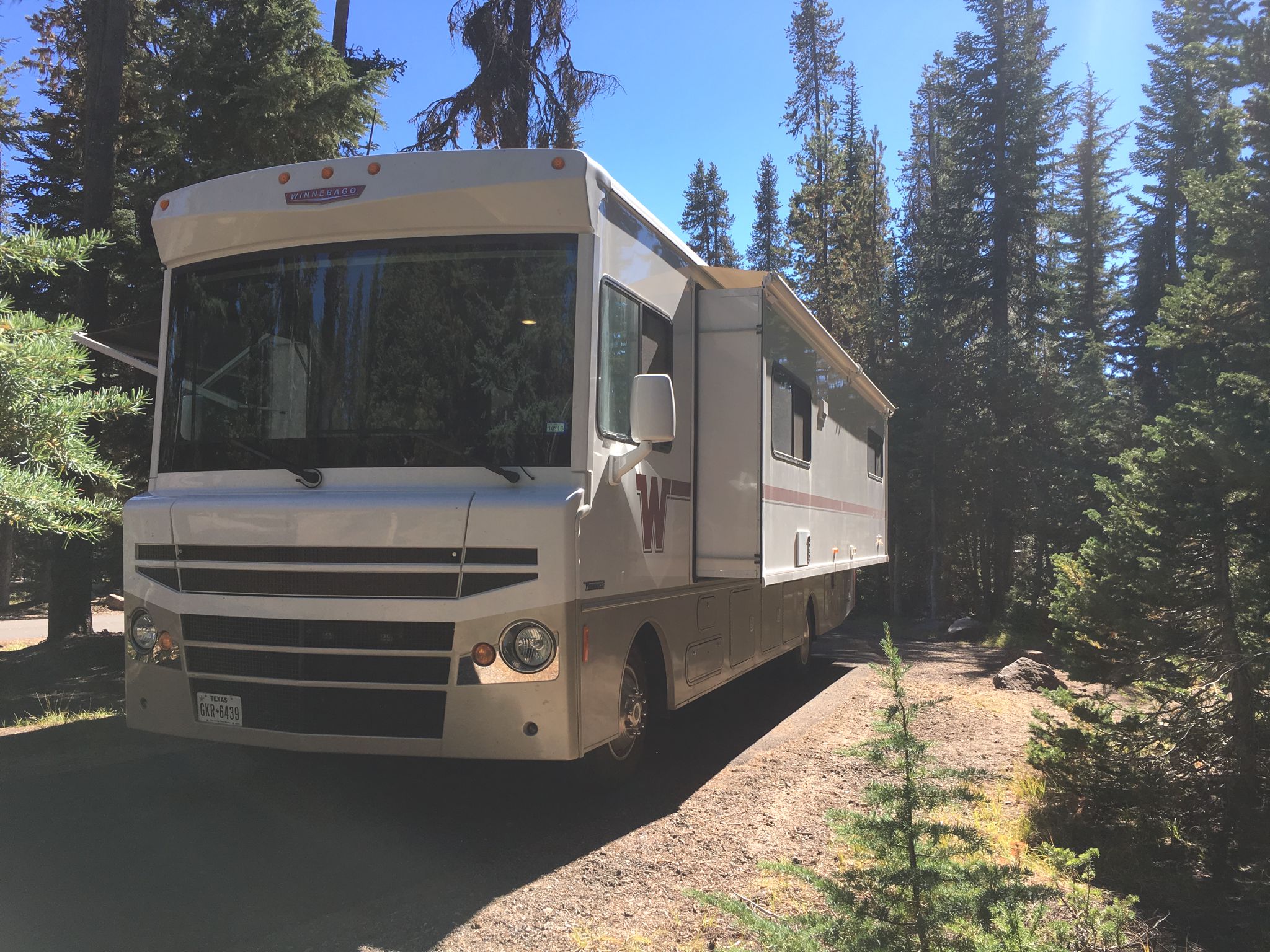 We were able to snag a last minute spot at the Mazama Village during our first night, but everything was booked up for the second night, which cut our time in the park short. It's always annoying to pack everything up and move sites. If you'd prefer to have a definite spot, I'd reserve in advance, even though it will require paying an extra fee.

The sites at Mazama Village were $31 for no hook ups.

Our second night we stayed at one of the sno parks a few miles outside of the park entrance, per the recommendation of the park rangers. Being from Texas, we had no idea what a "sno park" was (it's a snowmobile park). During the summer months, you can camp out in the giant parking lot for free. 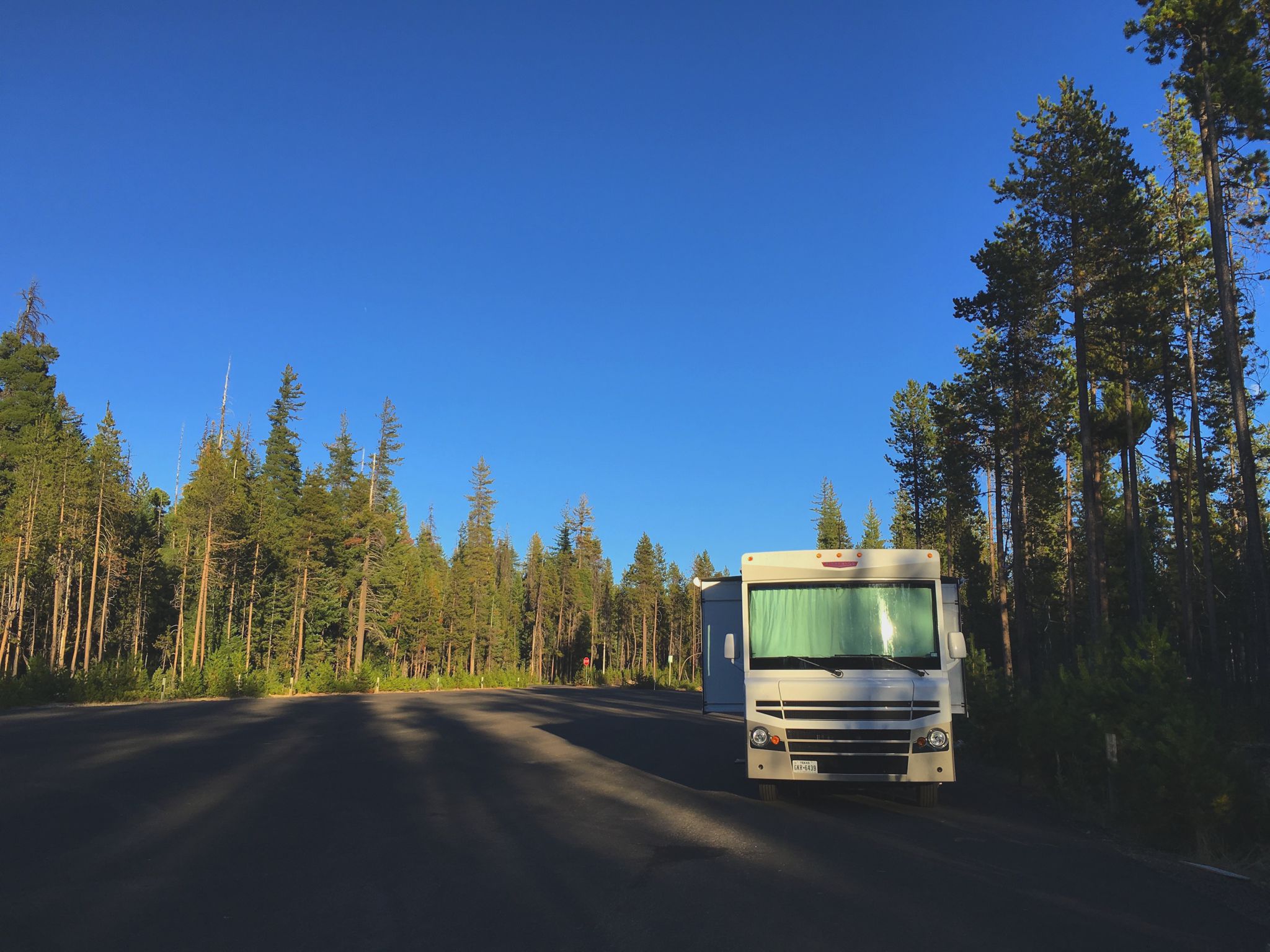