The Travato: a behind the scenes look

My 12 year-old brain looked at the awesomeness of a 3" slab of foam laid out in the roughly used back of the neighbor's Ford Econoline van. "How cool would it be to camp in that?" I thought. Next to me it's proud new 17 year old owner hugged his girlfriend as they both giggled. Looking back, I now suspect they had a more evolved purpose in mind.

This is a story of evolution. The mechanical, not the biological kind.

Vans have been a staple of American tradesmen for over six decades. The flower-power generation embraced and adorned their vans as mobile, "anything goes" habitats as symbols of counterculture freedom. As sturdy and boxy as American vans were, it was Volkswagen who tapped into the "me" generation's sense of wanderlust and quest for fuel economy with their endearingly underpowered mini-bus. Today, aging boomers often get misty-eyed thinking about their VW Westphalia campers. In the early 80's the van concept evolved from utilitarian airport shuttle haulers to more svelte and car-like soccer mom-mobiles. Yet compared to the dramatic styling and technology changes in passenger vehicles, utility vans continued to roll off assembly lines like square Lego blocks essentially unchanged, destined for plumbers, florists and delivery services.

With the globalization of automobile manufacturing the DNA of fuel-efficient European design cautiously began to intermingle in the bloodstream of the American market. Mercedes was the first to establish a solid toe-hold in the US with their Sprinter chassis. It was adapted first by Winnebago for C-Class motorhomes, became a wildly successful product with the View/Navion line.

The Sprinter brought the concept of a full-height interior which was ideal for delivery (FedEx) and service vehicles. Two other well know van makers, Ford and Chrysler, clearly were watching the Mercedes experience and, seeing a healthy desire for a radical rethink in vans, started readying their European-proven designs for the American market. Today, Chrysler's new RAM ProMaster is starting to appear in US cities and highways and the Ford Transit will soon be competing with it on the road.

With these new easy-to-drive, cavernous, fuel thrifty designs beginning to take hold, it's clear that the evolutionary acceleration pedal of vans is about to be tromped. And given its history of developing products on European-inspired RV chassis, Winnebago is clearly in the pole position. 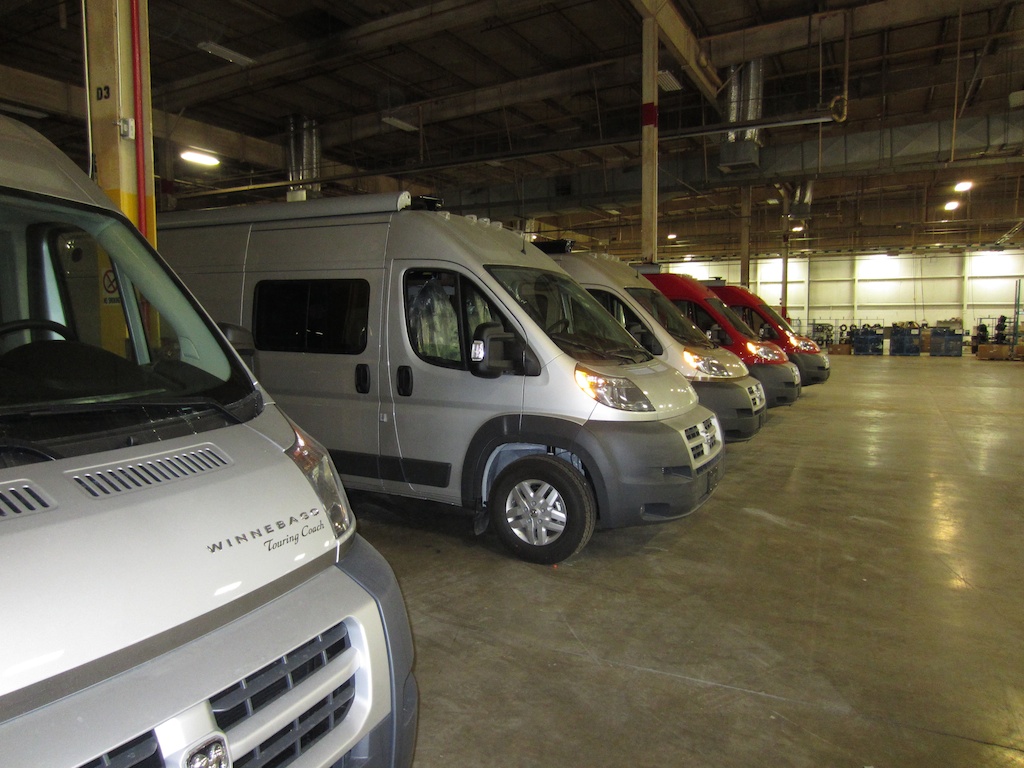 It is not a false boast to say that no American RV manufacturer can touch Winnebago's experience and success in adapting Euro-based platforms. Winnebago has been doing it longer, more consistently, and better than anyone else. And it's that sense of innovation and evolution that brings us to the new factory floor of Winnebago's assembly plant in Lake Mills, Iowa.

Sitting in an enormous building the size of several football fields, a row of RAM ProMaster vans wait their turn to begin their metamorphosis into a Travato to join the new Winnebago Touring Coach brand along with the Mercedes Sprinter-based Era.

As product manager Russ Garfin walks me over to the assembly area my first thought is, "where are the robots?" There are about a dozen vans arranged in a U-shaped formation with a virgin unit on one side of the U and a completed Travato at the other. At each evolutional stage two or three assembly technicians are deeply focused on their various assigned tasks.

As Garfin explains, "The market for B-vans is still pretty small. In 2013 the entire industry shipped just a little over 2,000 units." Hearing that number, it explains the absence of robots. Winnebago will make as many Travatos in a year that a good sized car plant will make in a day. Nonetheless, Garfin sees a lot of potential for growth, "The idea of a touring coach has a lot of appeal to outdoor enthusiasts. We're fitting Travatos with carriers for gear like bikes and kayaks which that active market likes."

But, before a Travato pulls up to unload a kayak above a class 4 whitewater run, its journey starts as a plain van box rolled to the starting point in the Lake Mills plant. One of the first orders of business is marking and cutting openings in the sheet metal sides for additional windows. 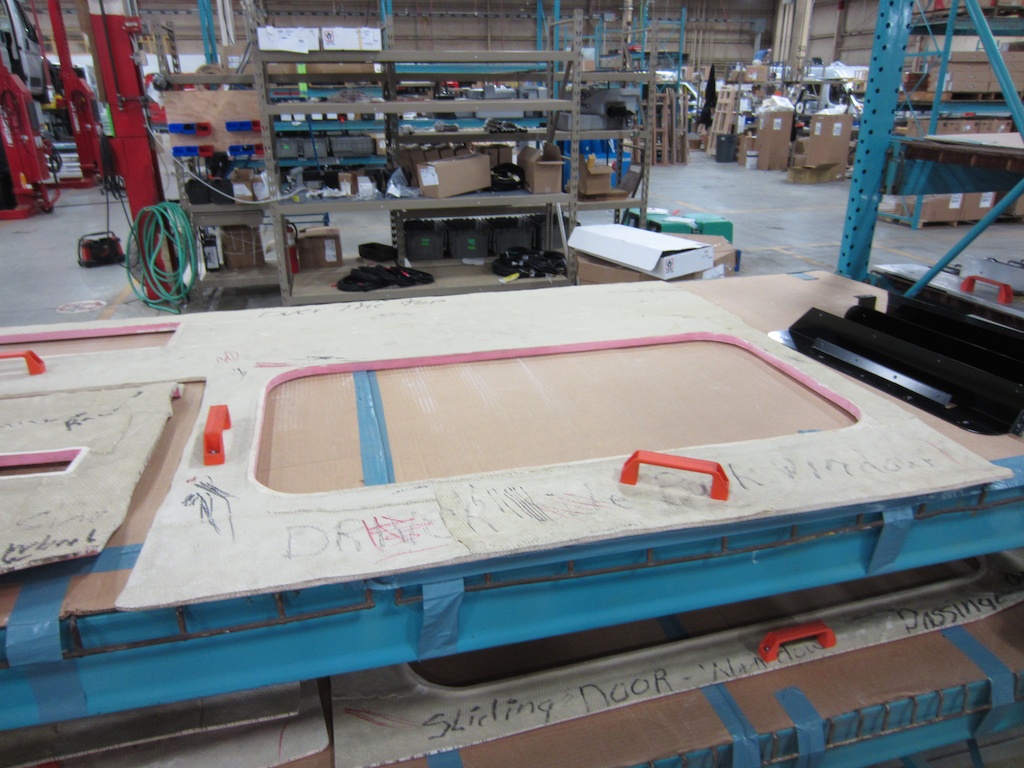 The next step is adding custom manufactured steel supports that will firmly anchor the interior furnishings and three point passenger restraints. It's here that you begin to see Winnebago's ingenuity and design expertise come into to play. In hefting one of the mid-cabin frames you get an immediate impression of sturdiness and durability. 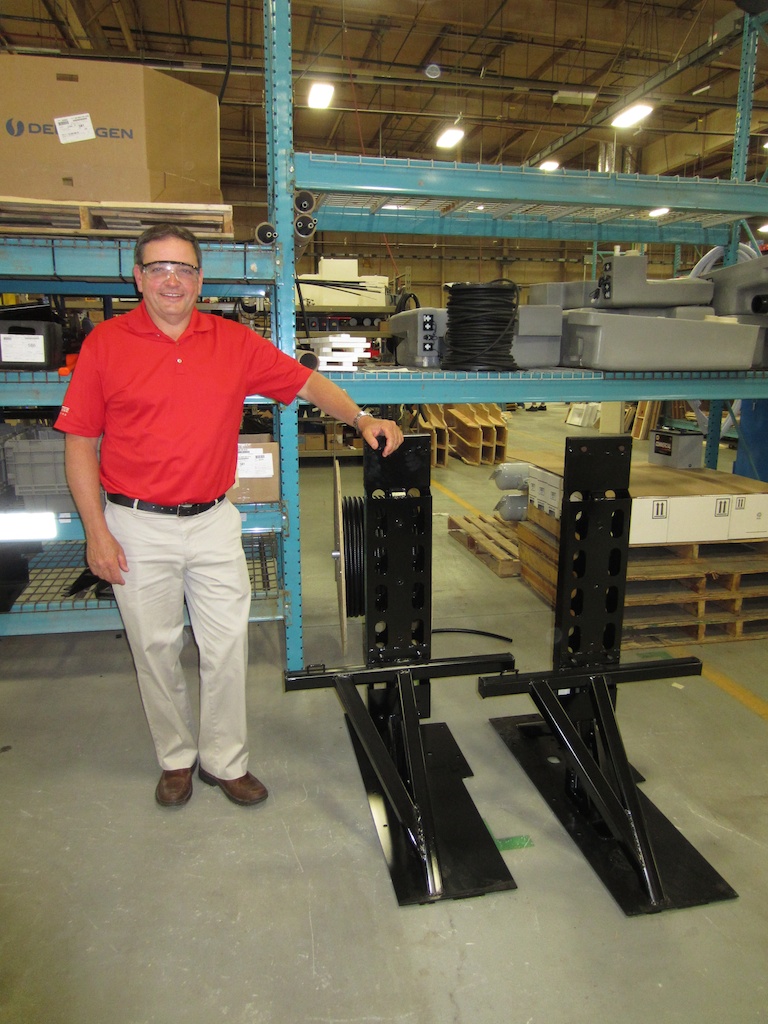 In a separate assembly area, a couple of deftly skilled women braid ropes of wires into harnesses that are then anchored along the outer walls throughout the cabin. After that, full insulation is applied that also adds noise reduction. 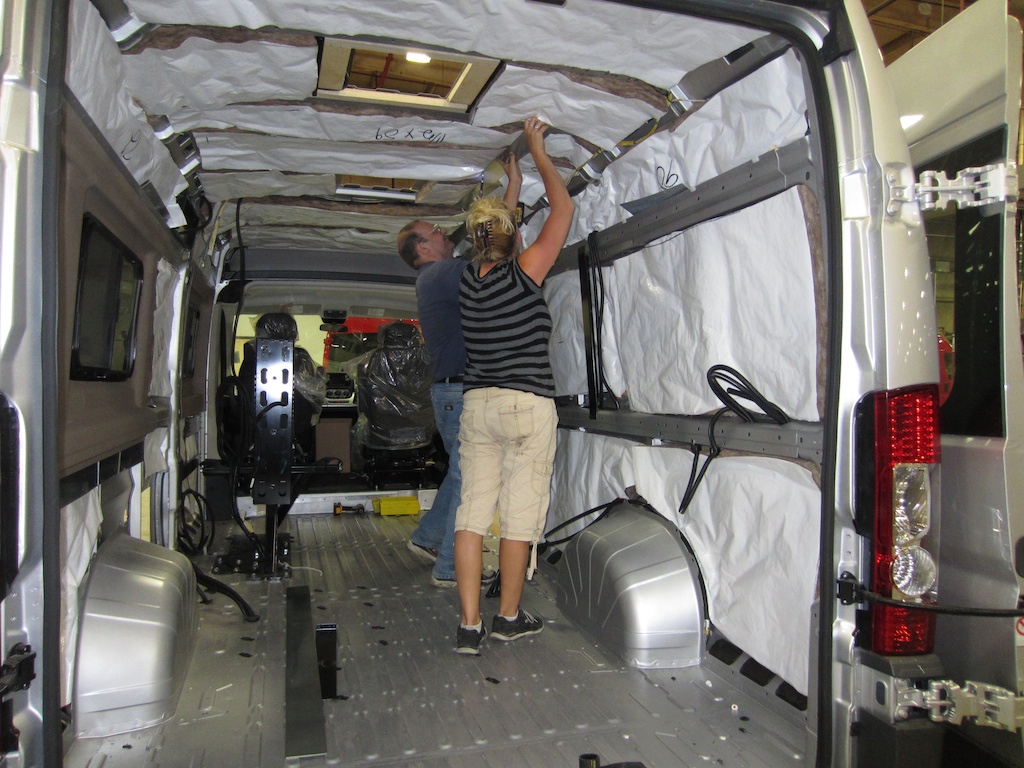 When designing a Class A motorhome there's a lot more elbow room to work with when it comes to fitting baths, galleys and beds. In the small, low-to-the-ground RAM ProMaster chassis you can see how decades of knowhow gained from developing compact motorhomes has allowed the Winnebago engineers to ace the final. Because the ProMaster is an engine-forward, front wheel drive chassis it frees up a lot of space under the floor. Maximizing in-cabin space actually starts with the chassis up on a high rack where custom molded holding tanks are fitted precisely into the frame along with a propane tank and an Onan generator. 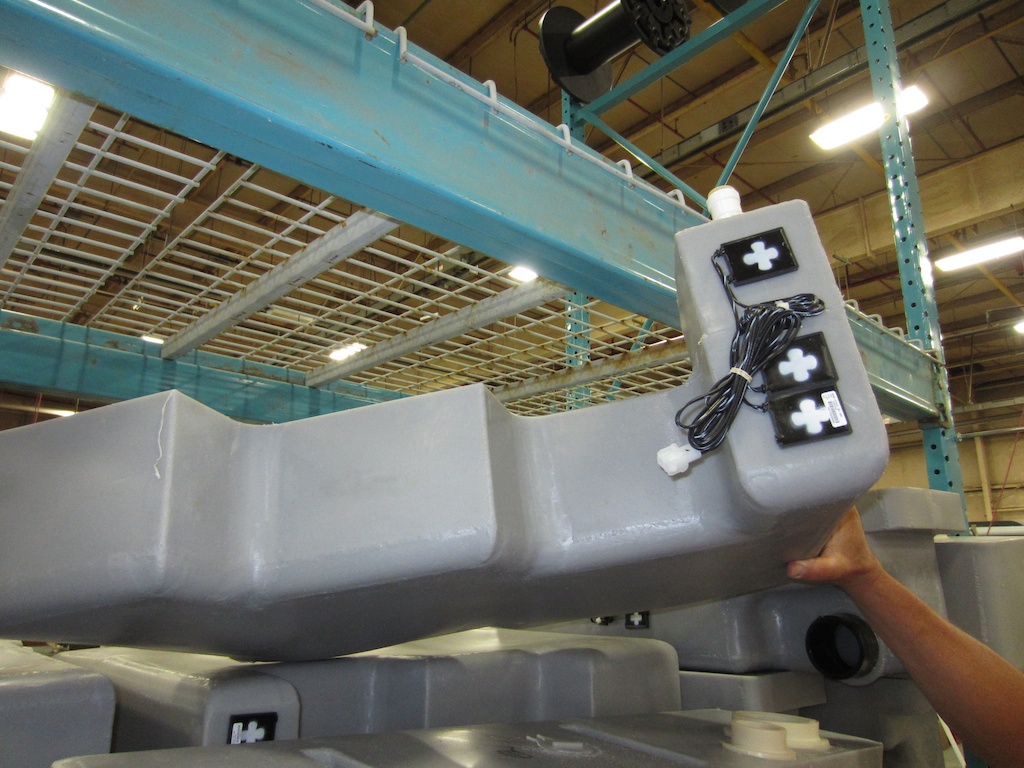 With space at such a premium, the freshwater tank actually is placed in the cab where it's cleverly disguised as a bench seat. Again, this is where custom tank molding allows the engineers to get the most out of every square inch. 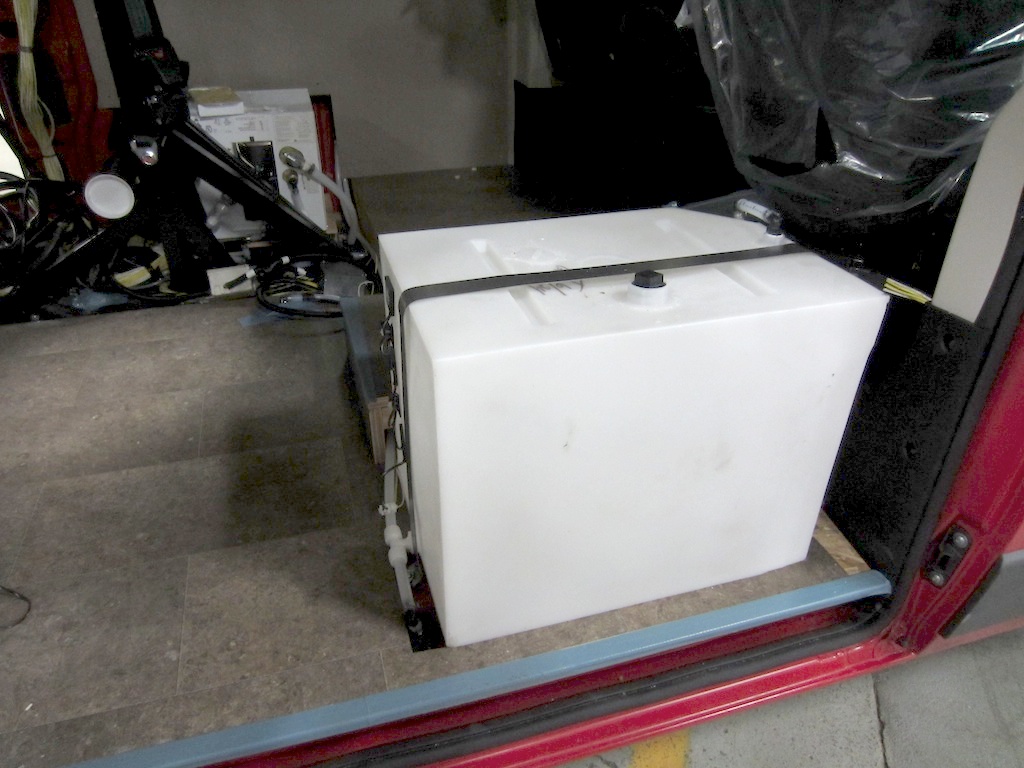 Soon to be a seat, the fresh water tank will be cleverly hidden.

The same holds true of the seamless, single unit bath which not only maximizes space, but also will make after-use cleaning a breeze. 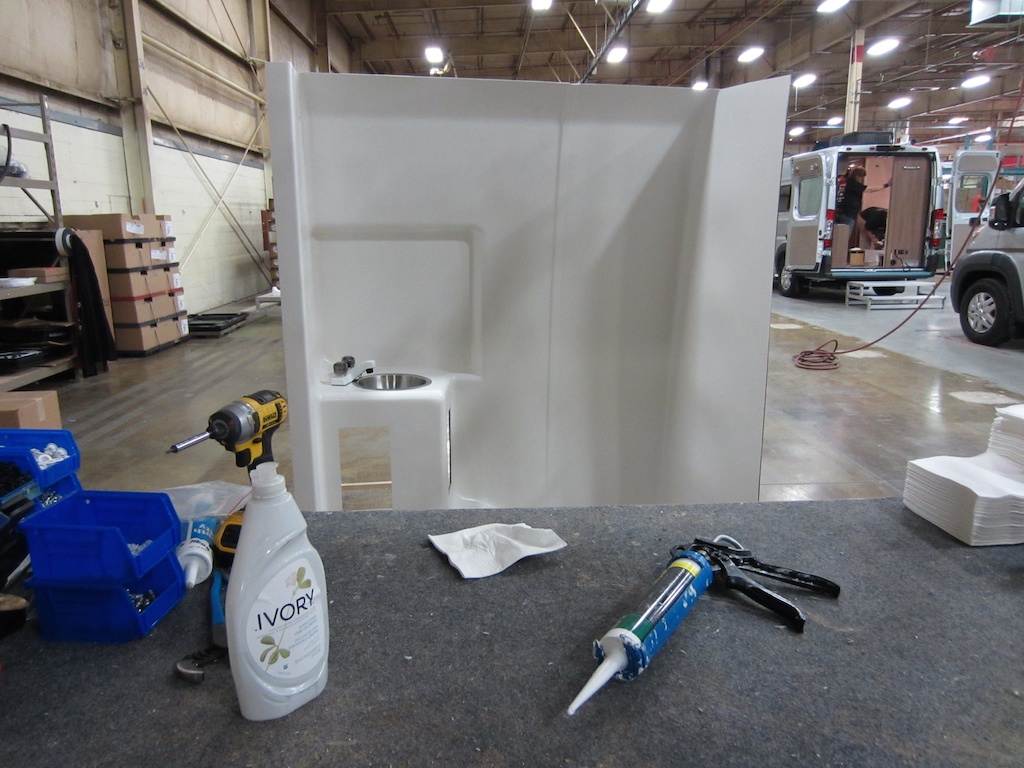 A bath unit ready for installation

Cabinetry installation is next, where custom designed and pre-assembled components are installed and securely anchored to the steel reinforcement frames. It's at this step that Garfin points out a key example of the company's new continuous improvement program. He points to a vinyl molded wall trim that covers a horizontal steel beam. "When my wife and I took one of the early design models out for a weeklong trip, my elbow would bump this beam when we were in the bed. We gave that some thought and came up with the idea of raising the bed a couple of inches so the mattress top was flush with the beam. Not only did that add some elbow room, but it gave us a little extra cabinet storage below." 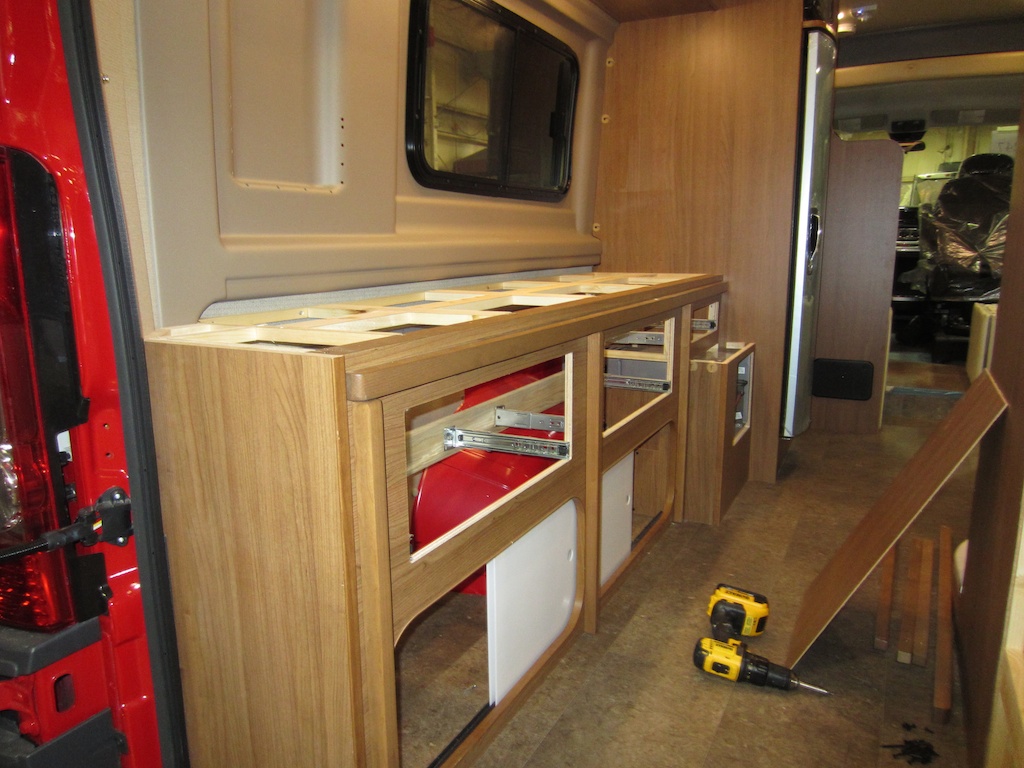 Cabinetry is designed for maximum storage and double use as the bed platform.

We're almost at the tail end of the process and at my feet is a puddle of water where a nearly completed Travato has undergone spray testing for water leaks. The final step will be a rigorous pre-delivery checklist of all the systems and fittings of the coach. 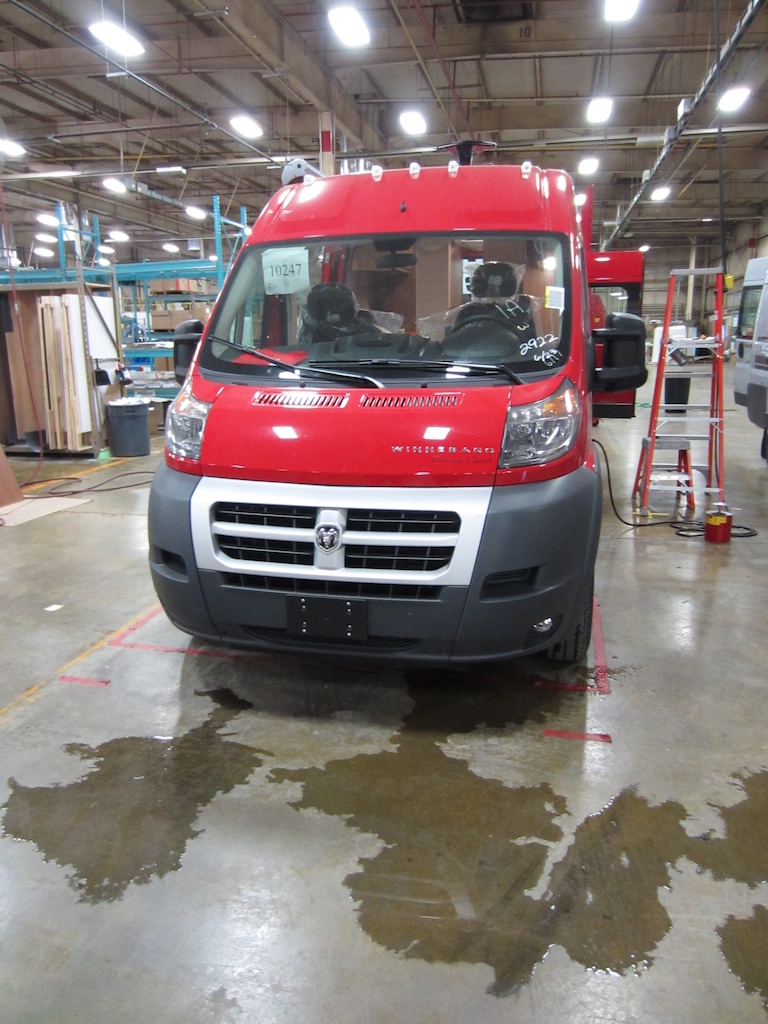 And what is it like to drive a Travato? In a word. . .a piece of cake. The ProMaster's Pentastar engine provides ample power with little cabin noise. The low belt line of the front and side windows give you a feeling that you're higher above the road than you actually are when compared to the higher step up into a Sprinter chassis. The Travato handles adroitly like a mini-van and with comfortable seats and a bevy of passenger automotive features like voice navigation GPS and it's as intuitively easy to drive as a family sedan.

If you're used to traveling in a larger C or A-Class motorhome, you may not picture yourself taking long trips in a Travato, but many who have moved up from tenting or small towable units, will look at the Travato as a luxurious upgrade.

I suspect there will be owners of large coaches who will see the Travato as an appealing option for gas-n-go shorter trips while keeping their big rig back at home. For couples and small families, the Travato can easily do double duty as the spring break, summer holiday getaway wagon and the daily commute vehicle. 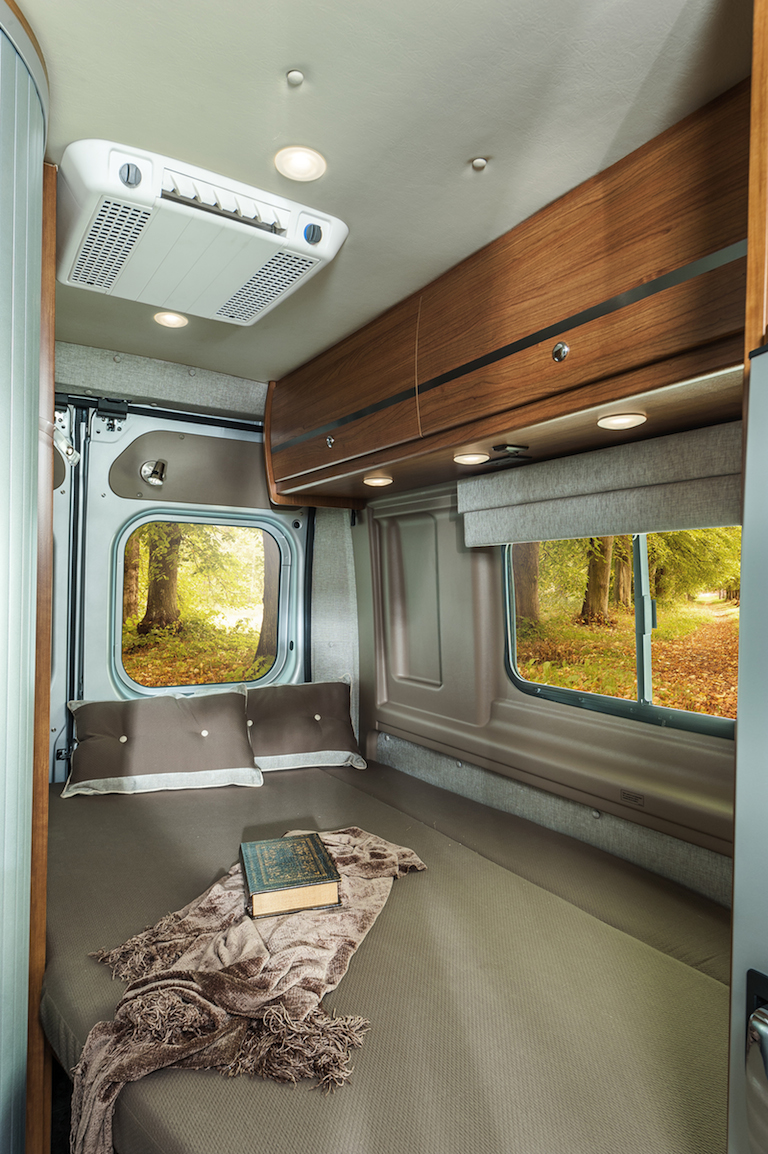 Winnebago's Travato is so evolutionary that, at times it seems revolutionary. And for me, my own thinking has evolved from my first foam-pad-in-the-Econoline moment. Now, being of a certain age, I see a comfortable base camp after a day of hiking or fly fishing, a bike carrier to a new rails-to-trails route, or the fun of curving along small two-lane roads between west coast wineries and, of course, as my teenaged neighbor once did, a little after-hours snuggling.