The Stories Behind the Pictures

If you lay a ruler across the map of the US and draw a straight line from Forest City, Iowa to Pomona, California that line goes right through the heart of Colorado.

In mid-October the California RV show, one of the largest in the country, draws tens of thousands of visitors. It's a perfect place for Winnebago to showcase many of it's products. This year the company wanted to send one of the brand new, classic designed Braves to the show. And, in looking at the map, it seemed like a perfect idea to route the Brave through Colorado, and send a top industry photographer to capture the fun and spirit of this smile inducing model against the backdrop of the highest peaks in the Rockies.

Until we moved back to Denver a couple of years ago we spent twenty years living in the heart of western Colorado in the Vail Valley. So when the call came, "Don, do you have any ideas where we could shoot the new Brave?" I immediately thought of my old "backyard" and the stretch of US 24 (Top of the Rockies Scenic Byway) that stretches from the town of Leadville north to the Vail Valley.

The next question was, "Do you think you can find some active couples and families to be in the photos?" No problem there either as I made a few phone calls to some of our valley friends.

Over a period of three days we wrestled with the unpredictability of a Pacific cold front that often hid Colorado's signature blue skies and hit almost every checkbox of weather from thunder and lightning to sunshine and then from graupel (the German name for snow pellets) to sub-freezing temperatures at night. Hey, it's Colorado in the fall, you expect this. Fleece up! 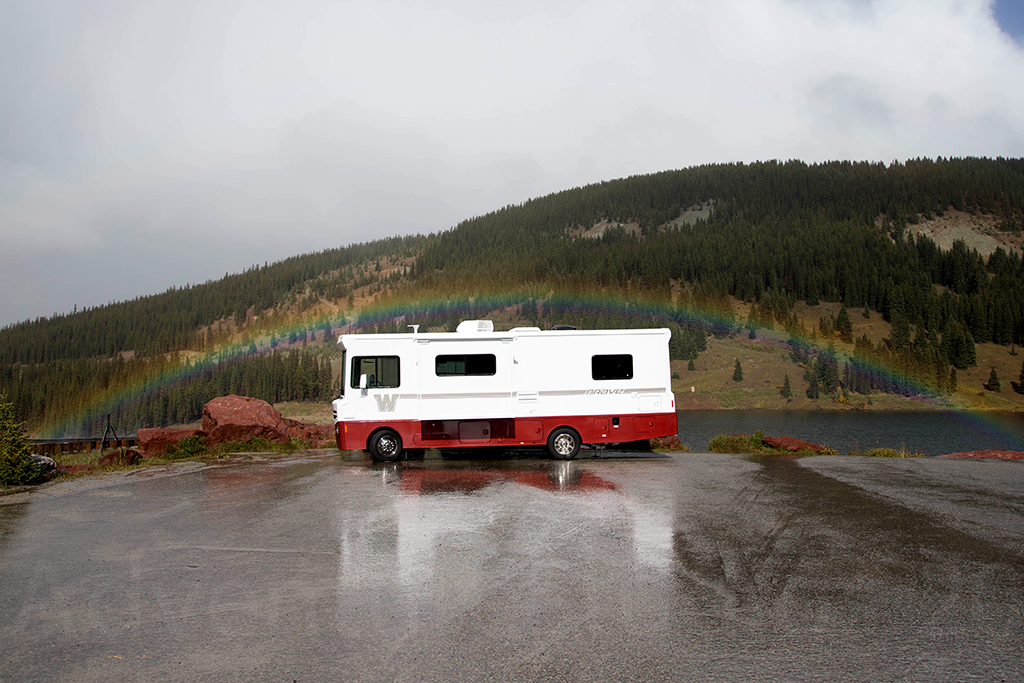 Our shoot started on a Sunday afternoon when John Linn, the owner of Adventure Studios in Brainerd, MN along with Jake Gyllen, John's assistant, rendezvoused at the Copper Mountain ski area a few miles from our first location.

Over the next year, close fans, customers and observers of Winnebago will start to see some of the images that John and Jake creatively crafted during our three days in the high country. True to good photo illustration these great images are designed to convey the spirit of adventure that static product shots can't. Of course in this kind of advertising the subjects remain nameless. But, in our GoLife world we're always looking to go a little deeper and be a little different. So, it's with great pleasure that I introduce you to the soon-to-be-named participants who made our photo shoot so fun and so successful. 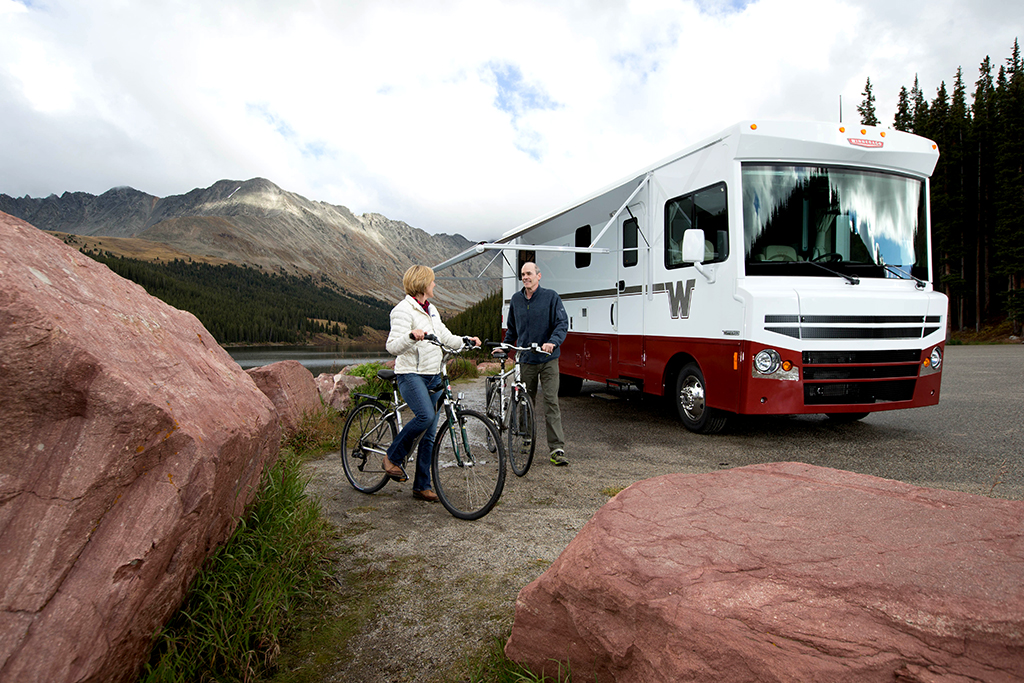 Carri and John pose during a quick appearance of the sun at Clinton Gulch Reservoir.

First off, meet Carri and John. Before I even called Carri to ask if she and John would be available, based on a conversation they recently had with a friend, they had found themselves looking at the Winnebago web site at the View models. They're on the cusp of becoming empty nesters and are intrigued with the option of RV travel. Spending a little time in our Navion Carri wished, "Oh, if we only could have had something like this when we were driving the kids to all the hockey games!"

John is the director of strategy for a Dallas-based national ad agency, but he keeps an office in Vail and has a BIG frequent flyer account. He's quiet and very thoughtful and that's quite a contrast to his passion for acting. He's rehearsing now in lead role as Billy Flynn in "Chicago" with the valley's community playhouse troupe.

A few years back Carri was elected to the local school board and served during a unique time of transformation as the valley school district of 6,000 children became one of the very first public school districts in the US to introduce performance pay for teachers. This was a tough transition for Carri, her fellow board members and the district administration. But, the effort was worth it as student performance increased and teacher compensation, in a very high cost of living community, improved as well. 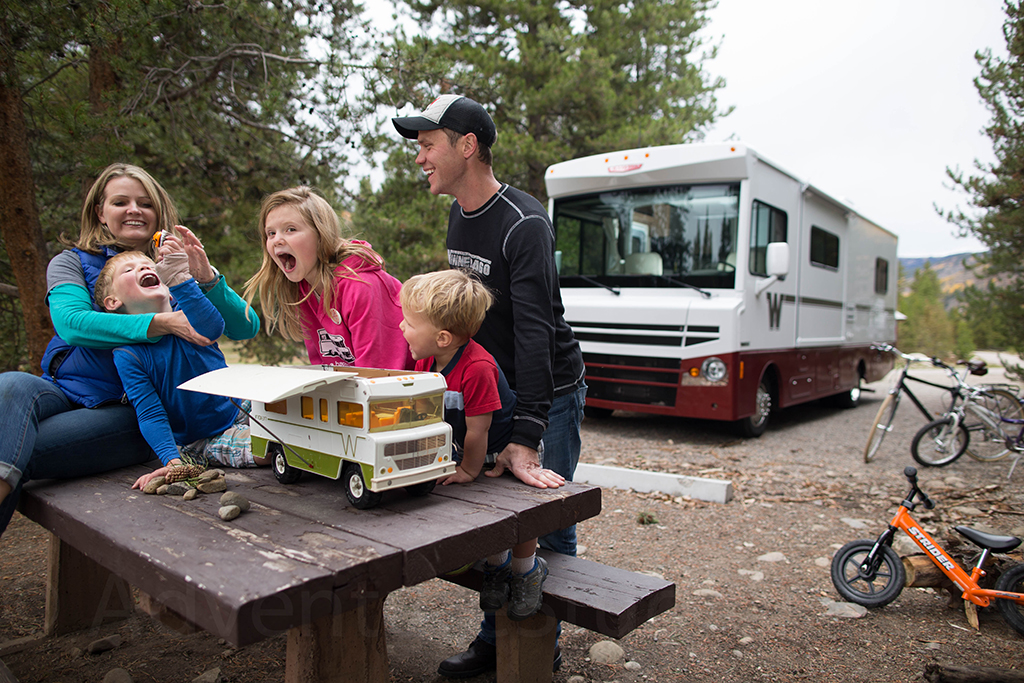 Are we having fun? You bet! Kim, Eric and the kids mug it up with a Tonka classic Winnebago.

Kim and Eric are responsible for, as Kim says, "seven heartbeats." That's three young kids and two dogs. Eric has been a youth pastor for nearly a decade, but typical of many who live in a resort area has held multiple jobs at the same time. For several years he served as the executive producer and on-camera host for one of the valley's resort cable channels. Beyond his youth pastor job, today Eric also serves as the hospitality manager for one of Vail's top rated restaurants.

Moving from Ohio, Kim started her career in the valley working for the local Habitat for Humanity chapter. She got her broker's license and then went to work as the real estate broker/manager of Eagle County's affordable housing development, Miller Ranch. In resort economy speak "affordable" are condos, duplexes and single family homes that are priced from the $200's to the $400's. Kim's saint-like patience allows her to keep calm with all her household heartbeats and the inevitable stress of working with first-time homebuyers. 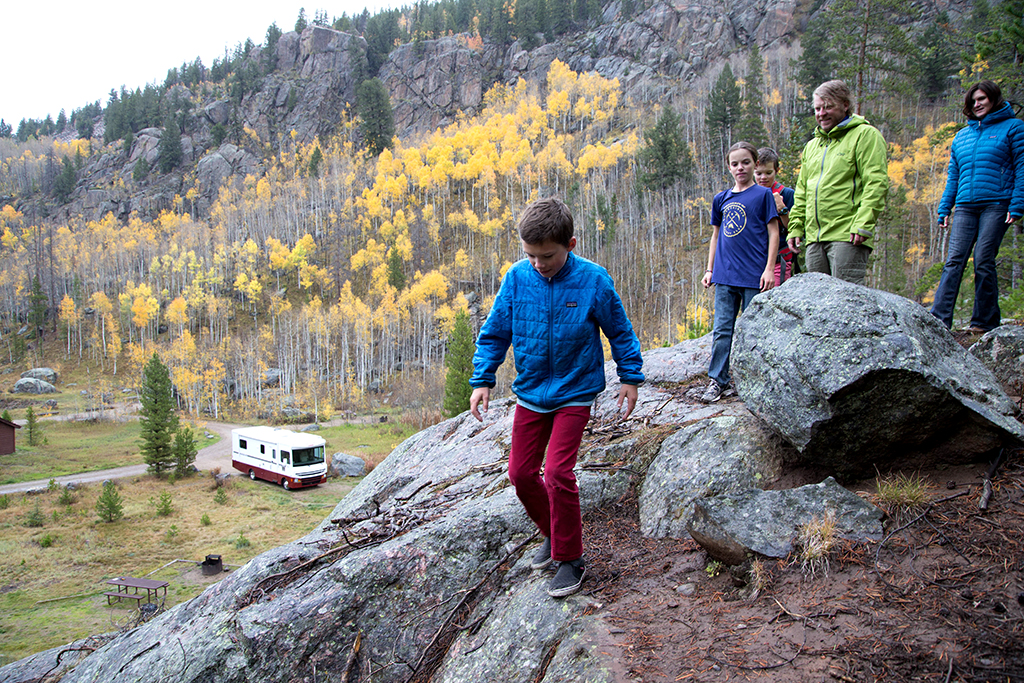 After climbing directly up the face of these rocks, Sacha and Yuri try the easier path to the top.

Yuri and Sacha met years ago when Yuri was working as a designer/estimator for a local valley landscape company. Yuri went back to school to get an advanced degree in landscape architecture and now, post-recession, is finally building that career. Yuri has a strong sense of community service and acted as the manager of a countywide smart energy program that was underwritten by a federal grant. Several years ago he ran for, and won, the race for mayor in the town of Eagle (population 4,000).

Like Kim, Sacha presides over multiple heartbeats including their three outdoorsy kids and a pound pup named Duke. Sacha has held various positions with one of the valley's premier resort management companies and has worked at both the Hyatt and Westin. Today she works for the Vail Valley Foundation. The Vail Valley Foundation is the high powered organization that makes sure the valley remains an international leader in culture and sports. Soon the VVF will be hosting the 2015 World Alpine Ski Championships and in early summer the GoPro Mountain Games where world class kayakers, fly fish casters, rock climbers, mud runners and mountain bikers compete. 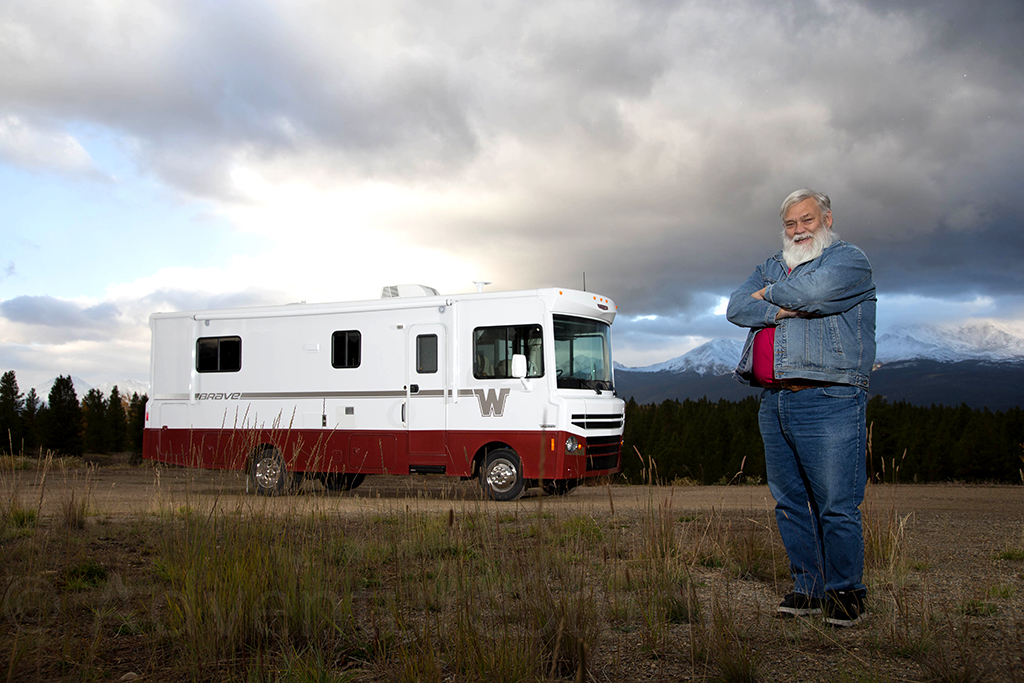 And finally, meet Larry, an independent contract driver for Winnebago. Larry grew up in Southern California and has spent years and tens of thousands of miles delivering motorhomes and large heavy construction vehicles across the country. He's one of Winnebago's "go-to" drivers for special assignments (like driving a Winnebago into mid-town Manhattan for a Fox Business News report). Watching him maneuver the Brave into some really tight spaces was a thing of awe and beauty. Larry's degree was in photojournalism and his strong sense of photography intuitively helped him position the Brave for the best photo spots. Though the air was a little thin (much of the photo shoot was at or near 10,000 feet in elevation), Larry was thrilled to journey through the golden aspens and picked up a few ideas for taking his Boy Scout troop rock climbing in Joshua Tree National Park in January.

Who knows? Any or all of our great photo subjects may someday become Winnebago owners because they all share a love of adventure. And I'm sure after seeing the freedom and fun of having the Brave in the high country. . .they're seriously thinking about it.

Watch the video of the photo shoot by clicking here.