The anticipation was palpable as we jockeyed for position in the Ottawa City airport boarding area, waiting for our flight to Colorado. Typically we are more sit-back-and-take-it-as-it-comes passengers, but that day we had four large bags of fragile photography equipment to fit in the overhead bins. The large crowd surrounding us was glaring at us, sizing up the competition for storage as we all swarmed impatiently around the ticket handler. Once on board, we crammed our bags in the last available compartment and wedged ourselves into our seats. The simple, meandering pace of RV living for the past three years had spoiled us, but the top-secret mission awaiting us in the mountains of Colorado far outweighed the hassle of air travel. The miles flew by (literally), and a few hours later we found ourselves 1,700 miles from where we began, standing in a parking lot in downtown Denver reveling at ... well, the Revel. 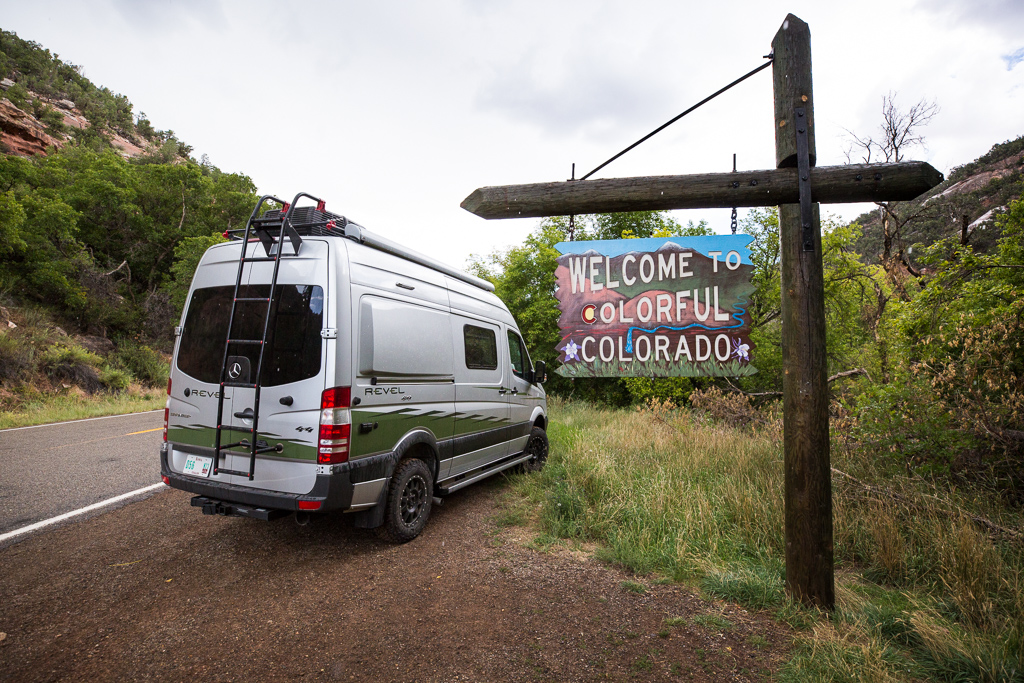 Colorado proved to be the perfect environment to put the new 4x4 Revel through its paces. 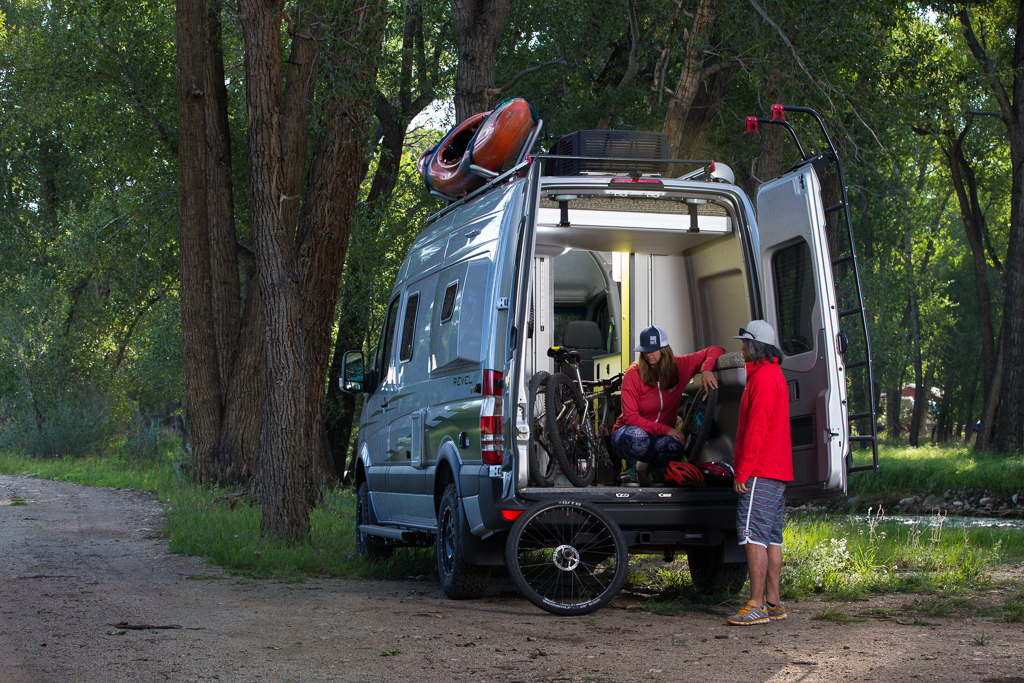 One of our favorite features of the Revel is the mechanized bed. Here it is in the upright position which is ideal for hauling bikes.

Our mission was simple, we had 10 days to photograph and field test the brand-new 4x4 Winnebago Revel, pushing its capabilities in the rugged Colorado mountains. We swung open the back doors and were immediately impressed with the innovative design. There is a mechanized bed that spans the back third of the rig. With the press of a button, it lifts and cinches up against the ceiling creating a large, multi-functional cargo area with infinite combinations of storage configurations. We loaded up seven huge bags of gear, and even with the bed in the down position, only utilized a fraction of the available space. I slid into the driver's seat and felt at home in a cockpit essentially identical to our sprinter-based Winnebago View. I pulled out into the 5 o'clock Denver traffic and noticed right away that the 144" wheelbase made weaving through downtown city streets a breeze. I did't even need the full acceleration capacity when we merged onto the freeway to head up into the mountains. 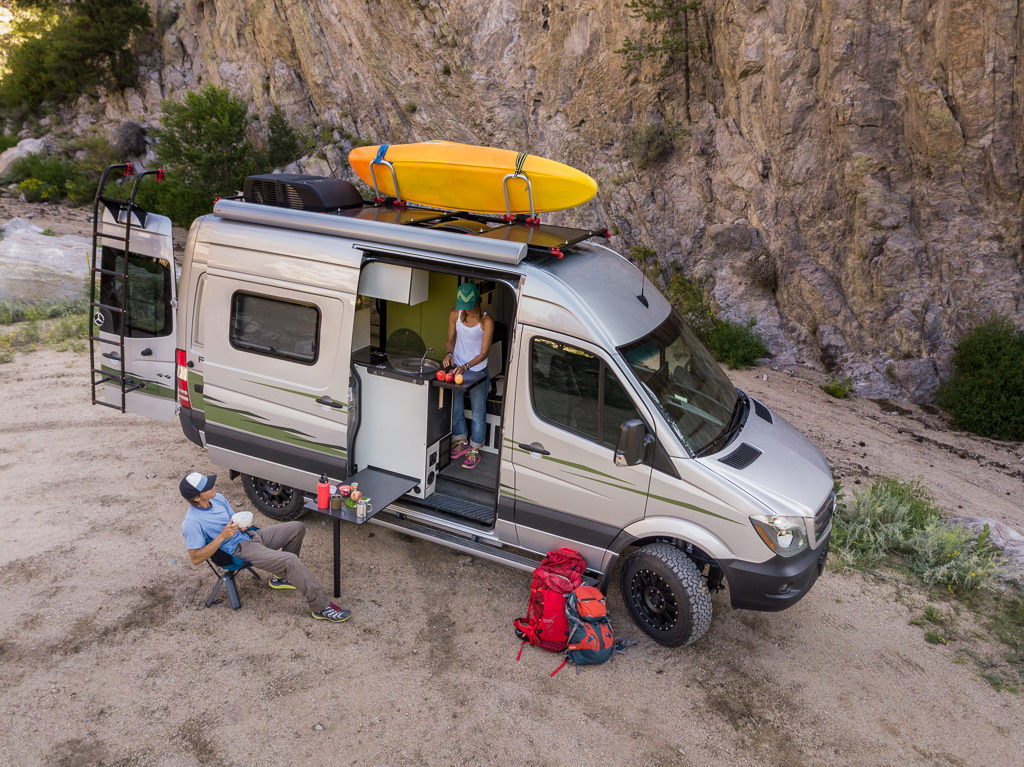 We loved the fold-down table out the side door. It blurred the line between outside and inside which greatly expanded the living area of the Revel. 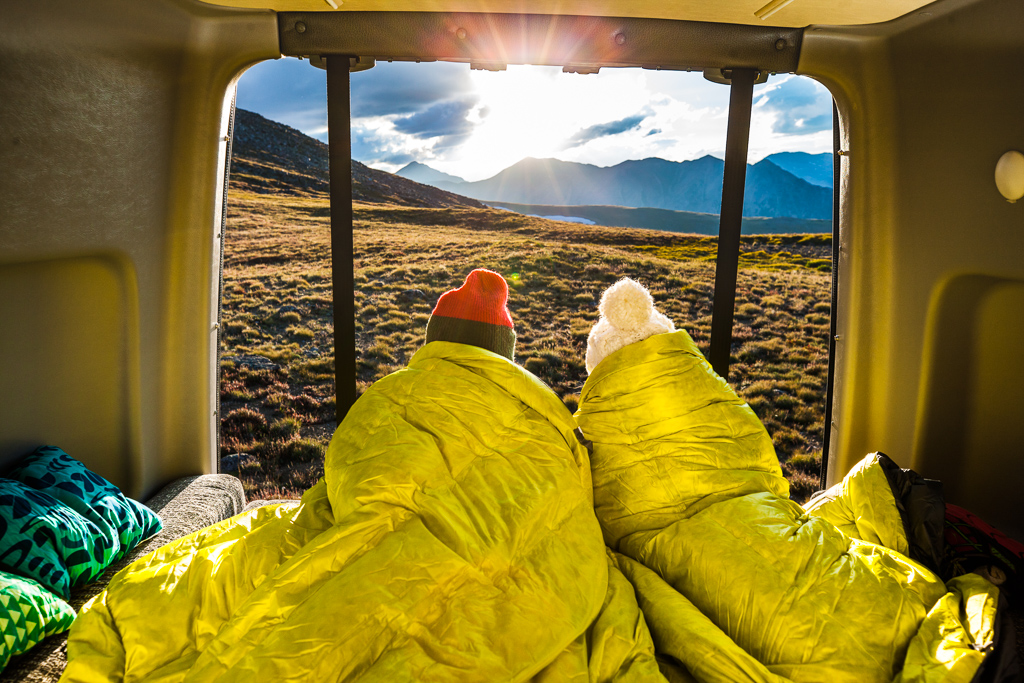 The back bed has all the comforts of home and we loved opening the back doors and bringing the outside in. The sunset was pretty spectacular at 12,500 ft, just outside Buena Vista, CO.

The first true test of the Revel began where Colorado's Front Range ends, as we headed up toward the Eisenhower tunnel: a 70-mile stretch of road with a 6% grade and 6,000 ft of elevation gain. My initial thought was to see just how fast the Revel could go, but at 78 mph on a particularly steep and curvy stretch, I conceded to the Revel and backed my foot off the accelerator.

Our destination was Buena Vista, CO, a small mountain town nestled along the banks of the Arkansas River where we could venture deep into the Collegiate Peaks and test out the 4x4 handling. The next morning, we pulled off the pavement onto a fairly well-maintained dirt road, increasingly pushing the 4x4 capabilities as conditions steadily deteriorated with elevation gain. By the time we reached 12,500 ft, we were navigating a rutted and narrow two-track trail with an occasional boulder or rock ledge thrown in for fun. The Revel performed beautifully and proved to be a warm refuge during an unexpected snow storm that enveloped us just as we reached the top of the pass. 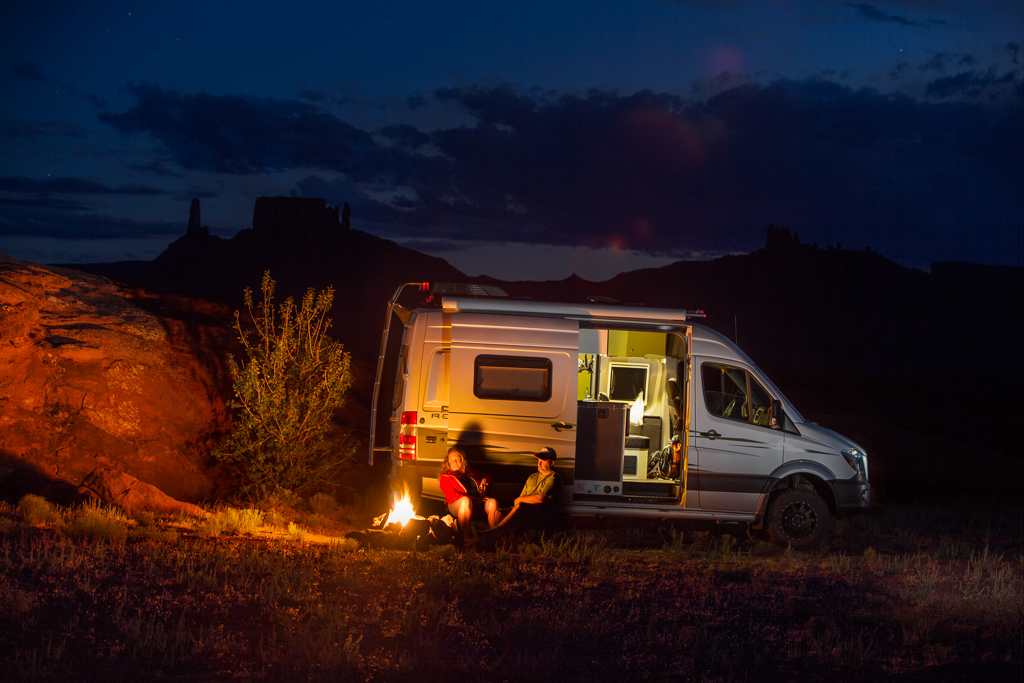 Peter and Kathy enjoying an evening under the stars near Moab, UT. 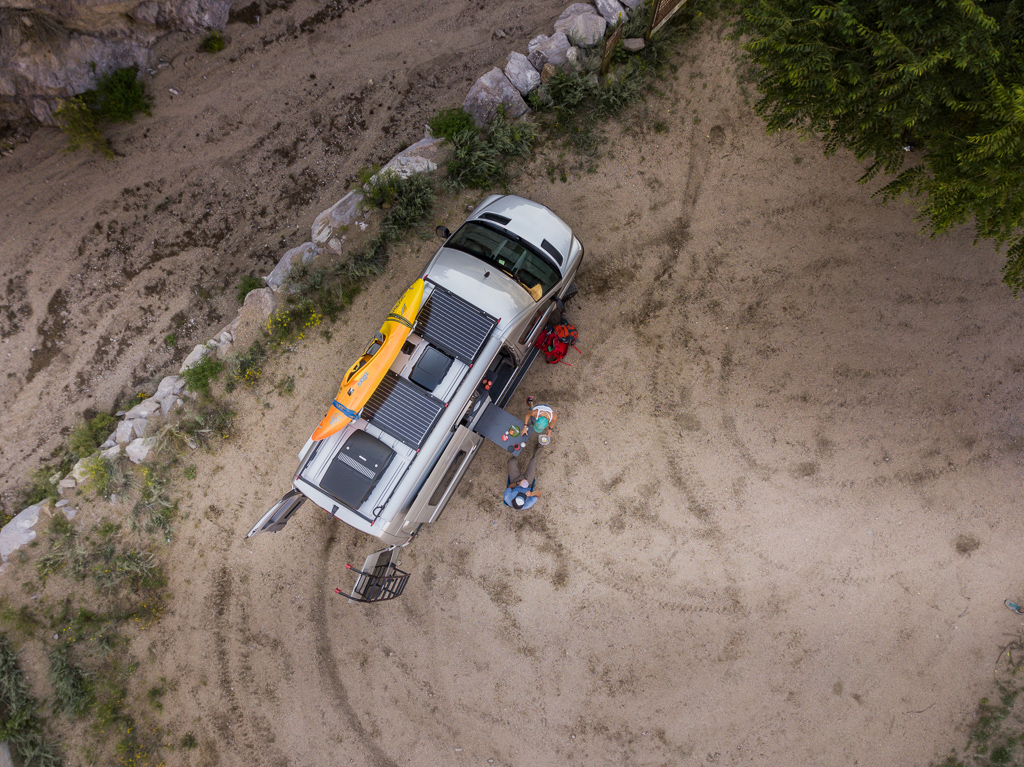 The 200 watts of solar on the roof and abundant power outlets strategically placed throughout the Revel kept our cameras and computers running smoothly throughout the week.

The rest of the week flew by in a flurry of chaos as we photograph from dawn until dusk, hauling kayaks and bikes, people and photography equipment to rugged and remote locations to create images that illustrate the true essence of the Revel. The Revel shined in every environment we explored, but for a true test, we headed to the mecca of 4x4 adventure: Moab, UT.

Pulling into town, we were surrounded by a myriad of 4x4 marvels, from tricked-out Jeeps and rock crawlers, to modified Unimogs and one-of-a-kind overland vehicles. We joined the unofficial parade of custom 4x4s that migrate up and down the main drag, and couldn't resist waving at a handful of gaping onlookers that were doing double-takes as we rolled by. We resupplied in town before heading out into the desert for a night under the stars - where mother nature delivered an extraordinary electrical display as a massive storm approached. 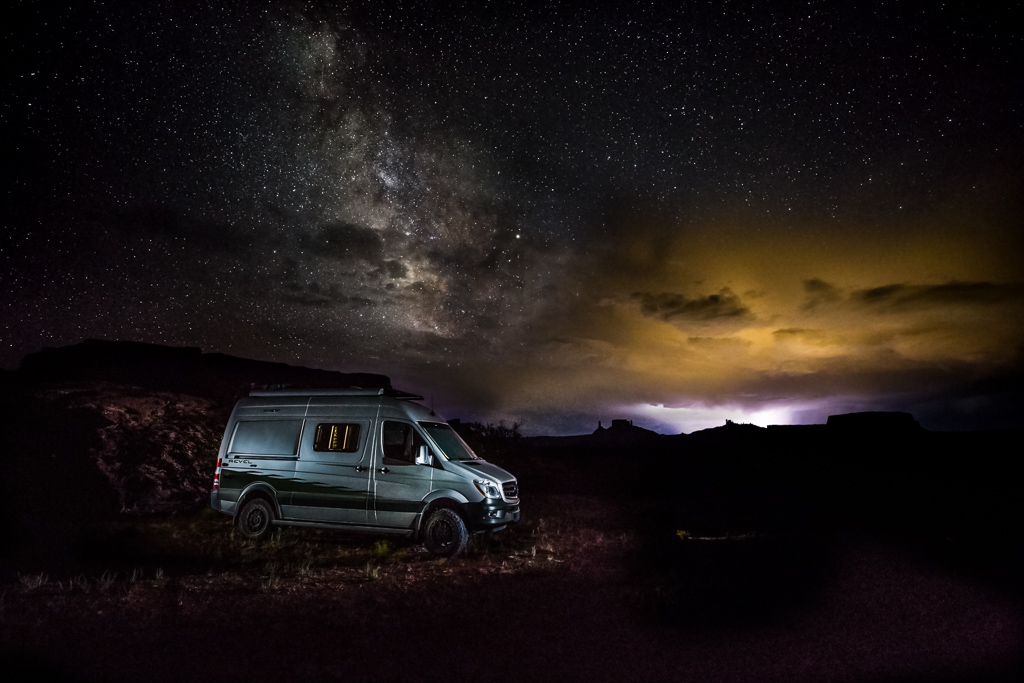 While Peter was photographing the Milky Way, a wicked storm started brewing in the distance. This image captured the juxtaposition of the clear sky in the foreground and lightening striking in the background. 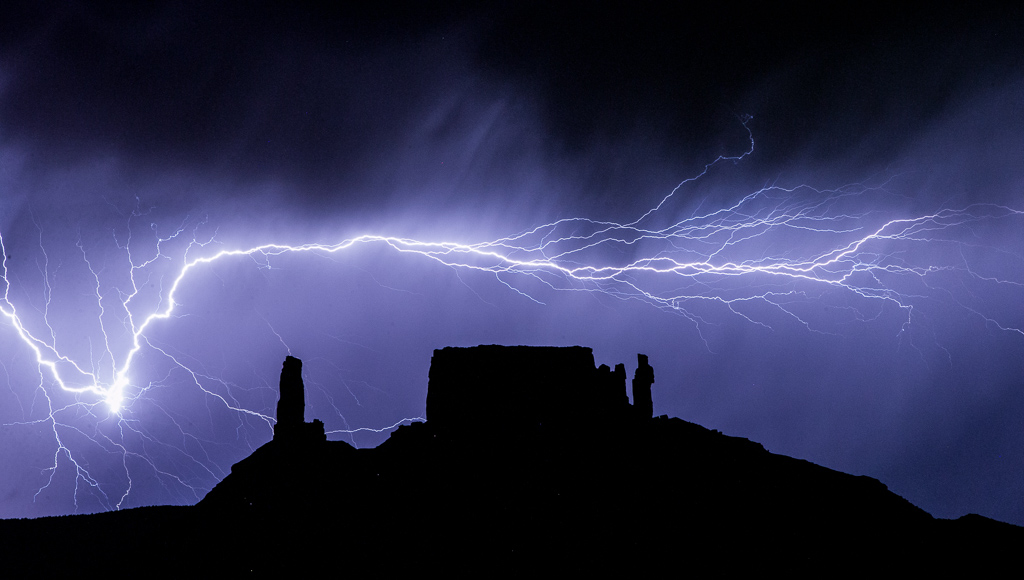 As the storm drew near, we were treated to an extraordinary electrical dance around the nearby desert towers. 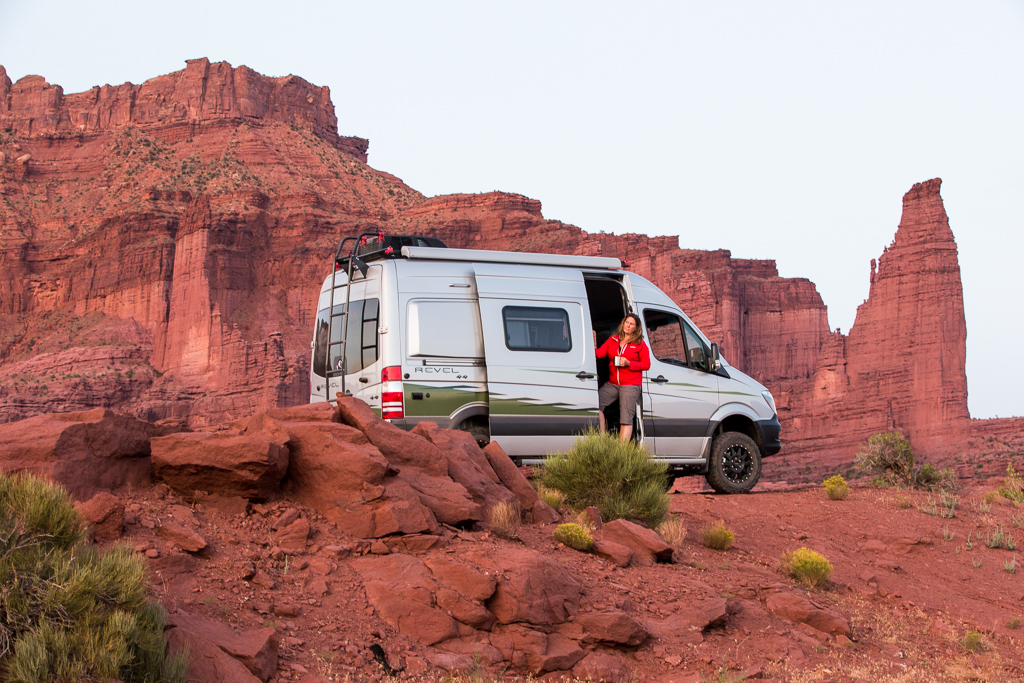 Kathy taking in the calm morning after the storm.

After a day exploring the rugged landscape around Moab, we ventured into the San Juan mountains of southwestern Colorado and over Ophir pass. The base of the pass was under construction, forcing us through axle-deep mud bogs that our beefy BFGs all-terrain tires handled with ease. As we made our way further up the pass, I spotted a narrow track ahead carving across a precarious slope strewn with boulders. A glint of sunlight caught my eye from deep in the valley and I was horrified to realize there was a rocky tomb 1,000 ft below of mangled vehicles that failed the 4x4 test just ahead. Apprehension overwhelmed me and I elected to walk the remaining mile to the top of the 12,000-ft pass, leaving Peter without a co-pilot to test the limits of the Revel.

I hiked ahead and watched with my breath caught in my throat as Peter and the Revel crept up and over steep rock ledges. He slowly, steadily climbed through loose rocks up a serpentine path with only inches separating terra firma and a drop into the oblivion below. Once off the ledges, I rejoined Peter in the Revel and breathed a huge sigh of relief that the worst was behind us. The last few switchbacks to the summit of the pass were a piece of cake, and it was literally all down hill the rest of the way into the quaint town of Silverton, where we stopped for dinner and a celebratory pint. 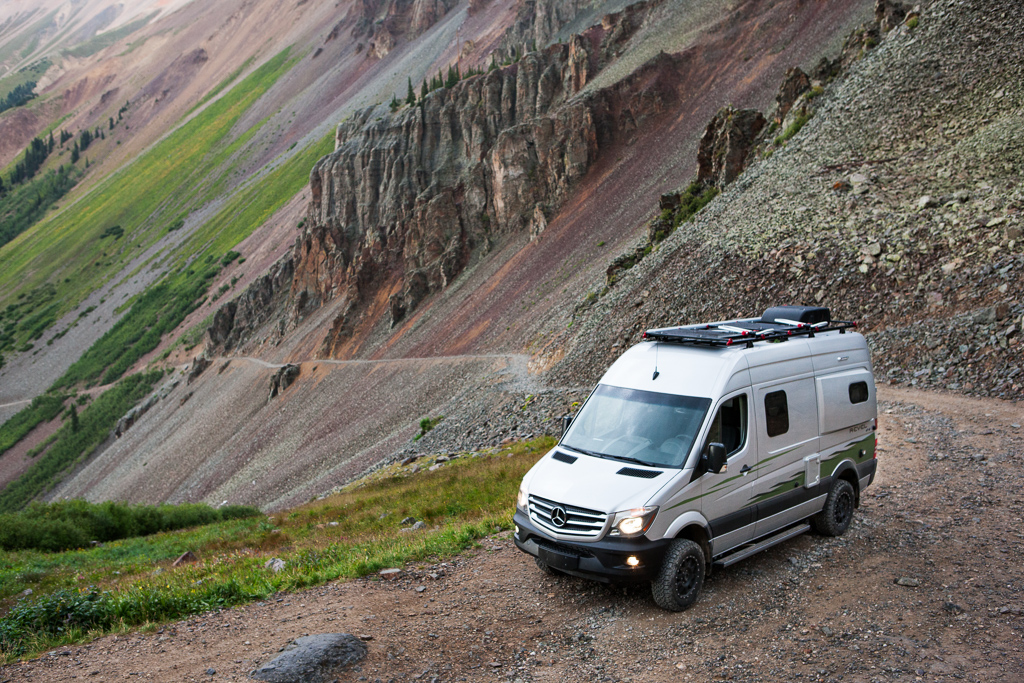 Looking down the narrow trail near the summit of Ophir Pass. 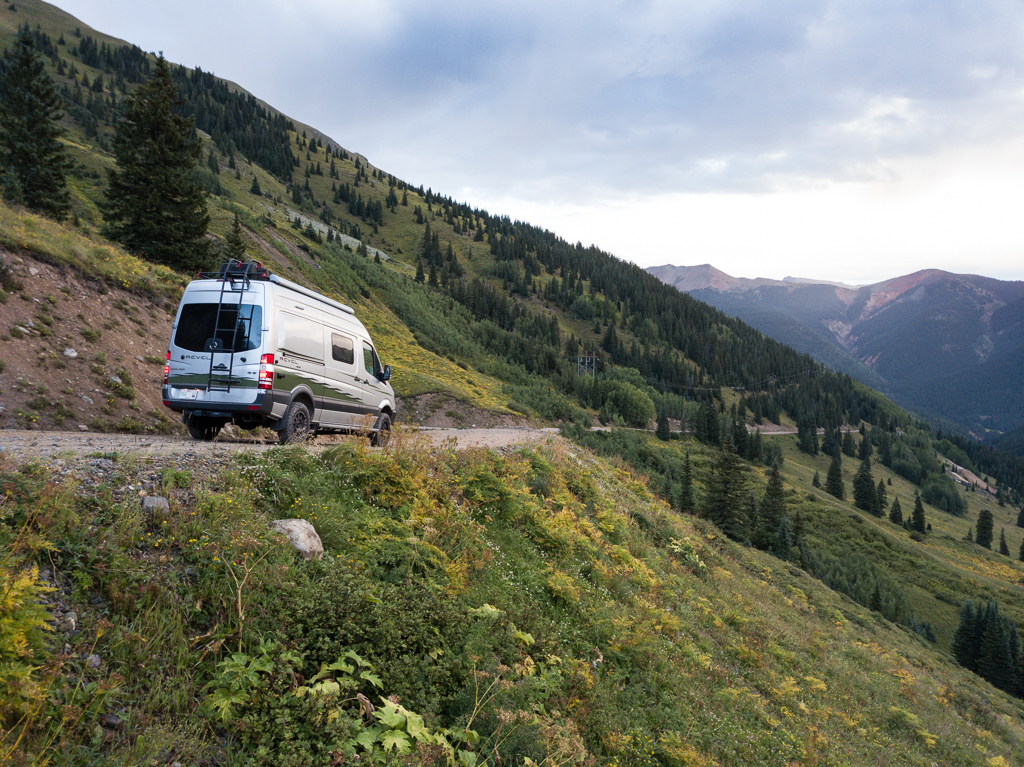 Heading down the Silverton side of Ophir Pass was smooth sailing.

Long before we were ready, we found ourselves with only one day remaining before we had to return to Ottawa. On our way to Kebler Pass for our final evening in the Revel, we noticed an overgrown track leading deep into a meadow thick with aspen trees, and we couldn't resist the opportunity to explore one last 4x4 trail in the mountains. Ten minutes later, we were surrounded by giant aspens and agreed that this was the perfect spot for the last night of our adventure. With the push of a button we unfurled the awning, then we set up the hammock and let the whisper of the leaves lull us into a peaceful afternoon nap. 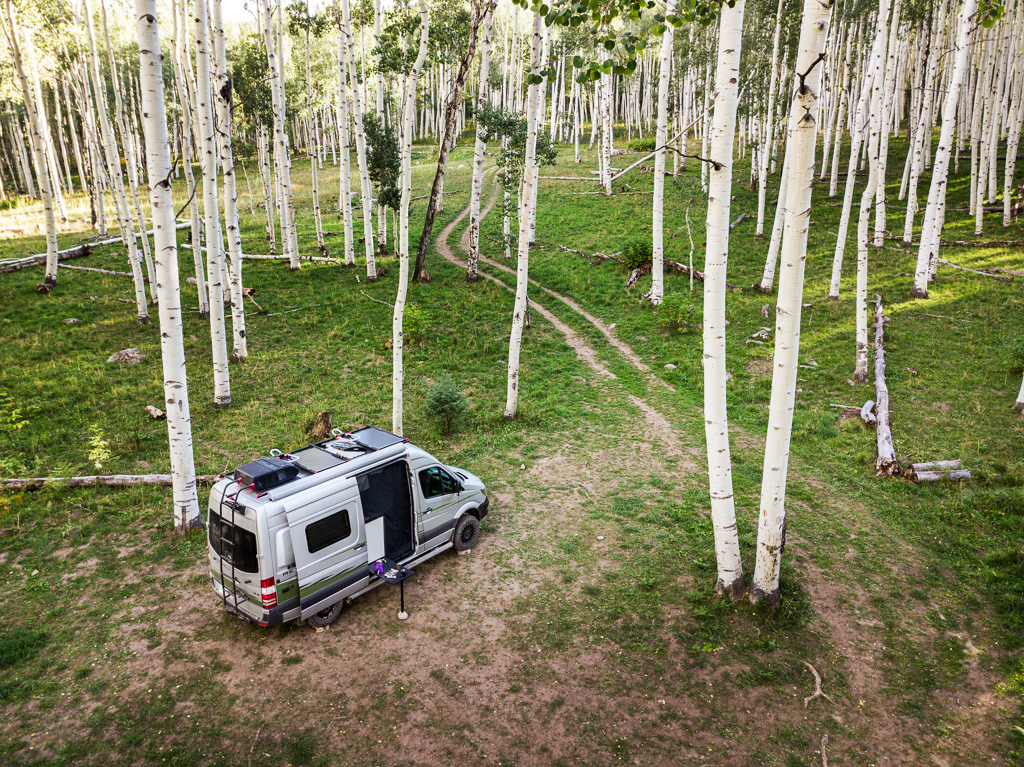 Discovering the perfect campsite after an impromptu detour is one of our favorite things. 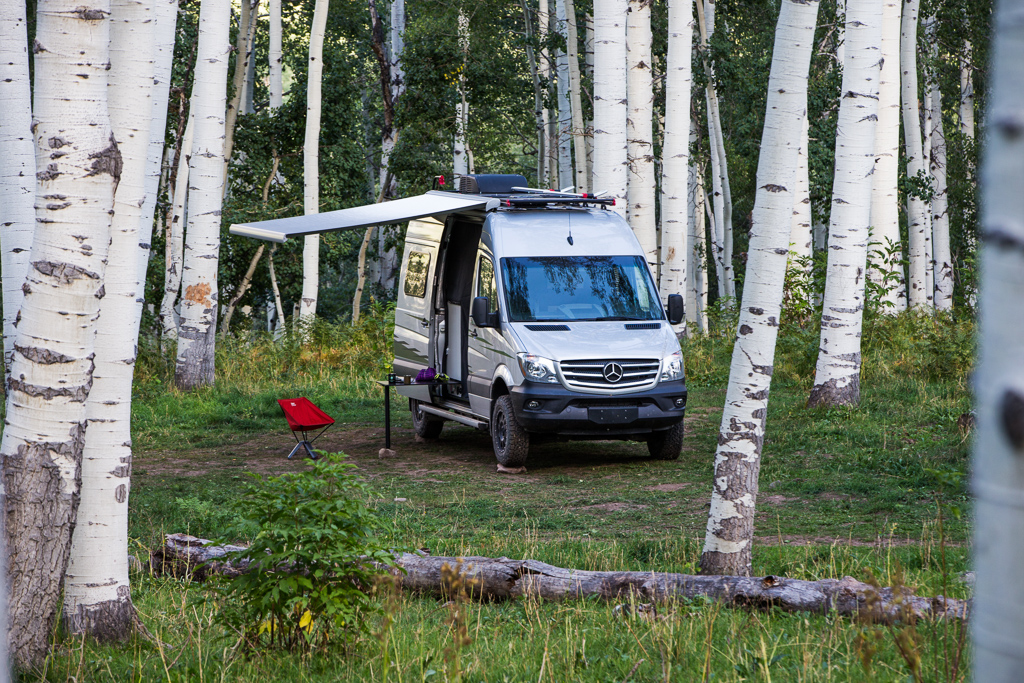 The awning deploys with the push of a button, but the best part is the wind sensor that automatically retracts in gusty conditions. 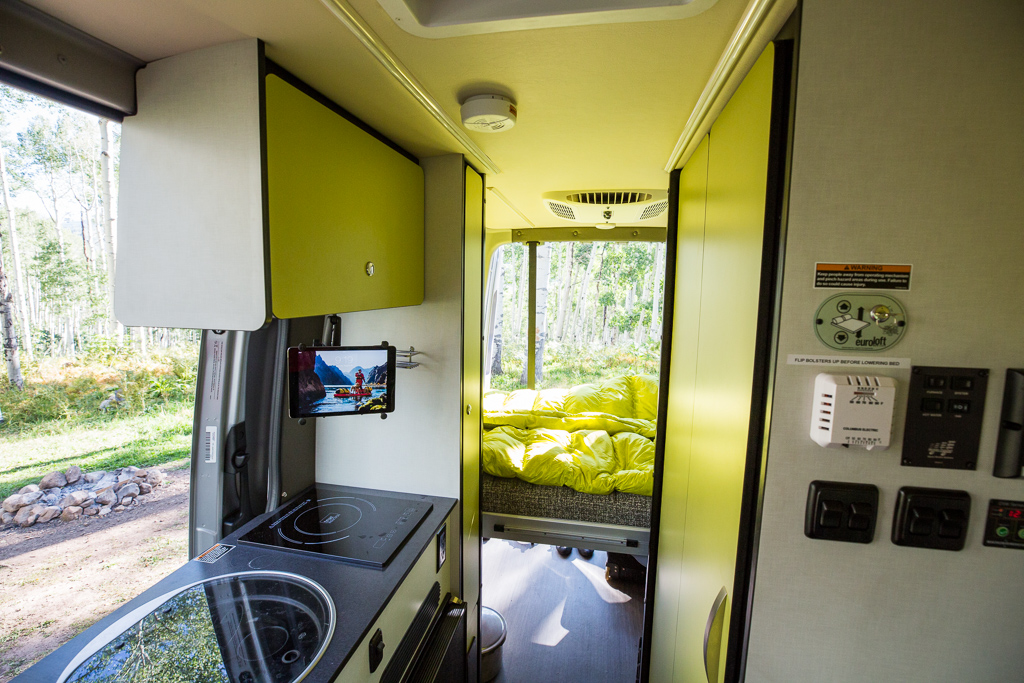 We spent the early evening sorting and re-packing our bags, trying to mentally prepare for our re-entry to civilization. As we dropped off the Revel at the airport and braced ourselves for pat-downs and the race to the overhead storage compartments, Peter turned to me and said, Would it be too weird for us to be a two Winnebago family? The Revel would be the perfect mobile photography studio. We both laughed, but I have to admit I can't quit thinking about the Revel. It would make a great shuttle vehicle for kayaking and could get Peter across rugged terrain as he chases his vision to create the perfect image. It would also work well for short bursts of cross-country adventures, or forays into the city and other places where we can't take our View/trailer combo. After a month of Revel ideas swirling through my dreams, I'm beginning to wonder how crazy it would actually be to be a two Winnebago family. 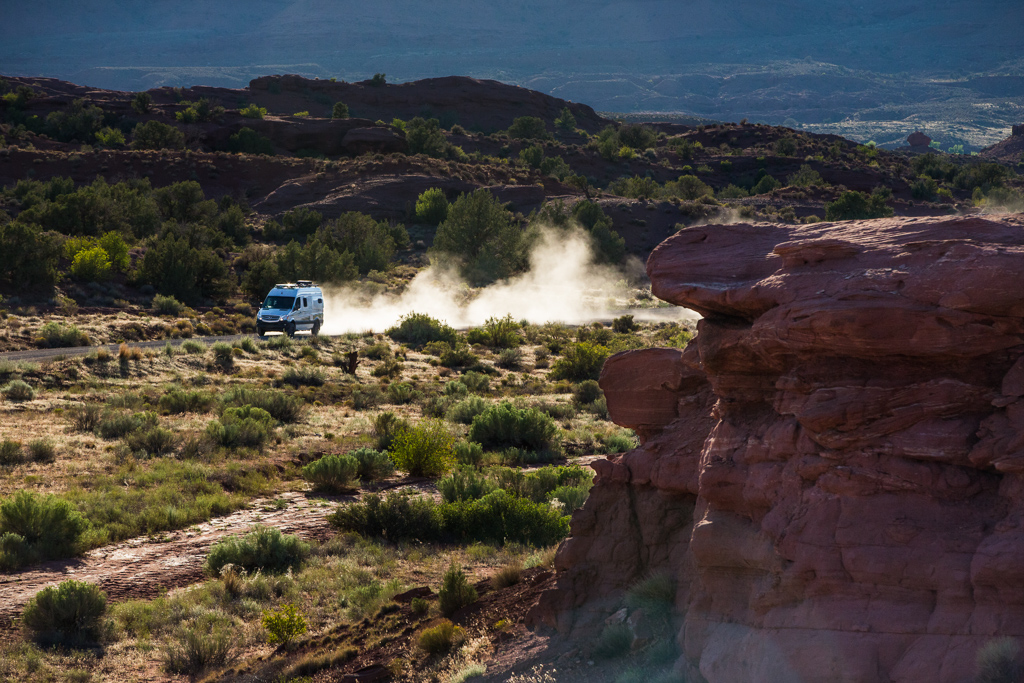 The best part of the Revel is where it can take you, and I have to admit ... I loved driving it.

Learn More about the Winnebago Revel