As a regular contributor to GoLife, I wasn't sure what to expect when I received an email from the Winnebago Marketing Department asking if I had time to talk. But it turned out, they wanted to know if I would be interested in going to Elkhart, IN, for the annual RV Open House to help present some new RVs for a Facebook live event. Of course, I had to accept!

What is the RV Open House?

I have to admit, I was extremely excited and very confused all at the same time. I had never heard of the RV Open House. This is because it is an exclusive event held for dealers, suppliers and manufacturers only. Once a year, about 4,000 people who are in the RV industry gather to see the new products coming out before they are released to the public. The hope is that the dealers will like what they see, order the new products to fill their lots, and start selling them. 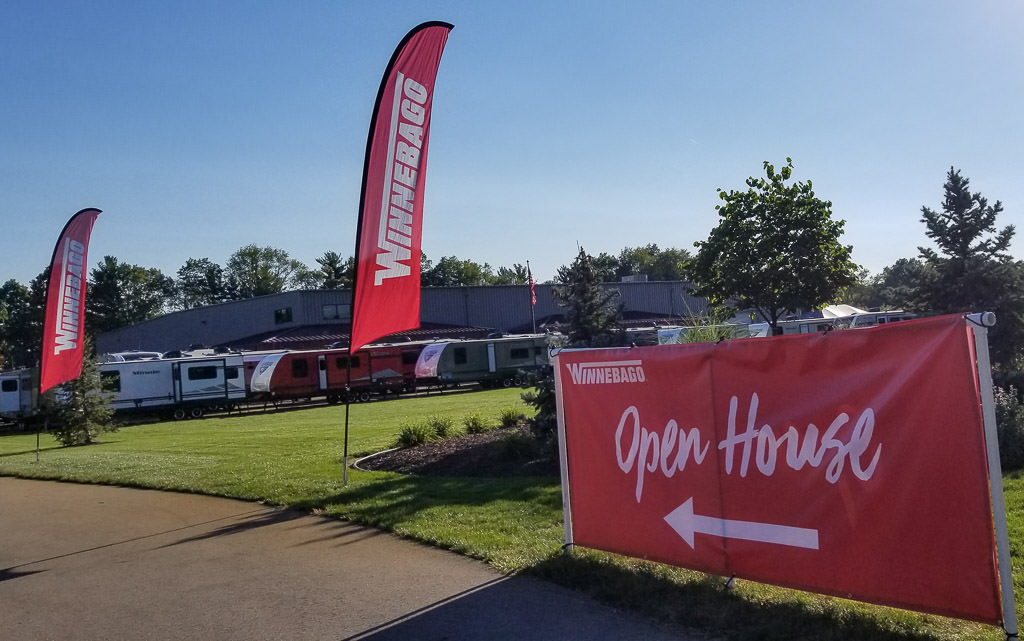 Why do a Live Product Launch?

Last year, Winnebago had a great idea: Why not share these new products with customers at the same time? Now, of course, they could not invite non-industry guests to the show. So, they came up with the idea of a Facebook live event (see more from last year's event here).

For this year's event, I was asked to be a presenter for the live product walk throughs, along with fellow GoLife contributors, Jon and Nadia Bajuelo. The three of us would team up with the product managers of each RV and showcase it to everyone at home through Facebook Live. 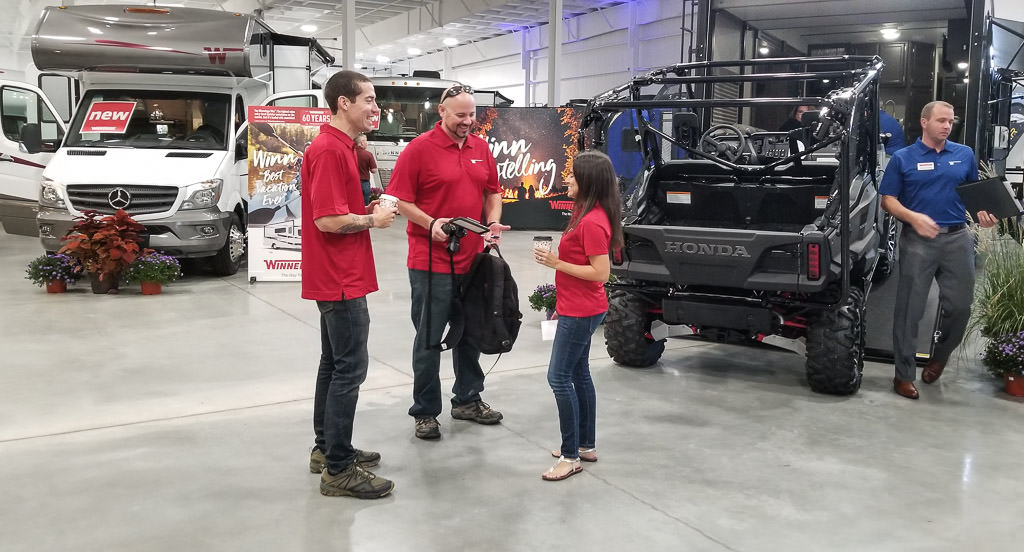 Winnebago is very proud of their products and couldn't wait to share the return of the Class A Adventurer and New Class C Vita, as well as the new Spyder toy hauler. If that is not enough, they also showed off some really cool features that were getting a lot of attention at the show as well. These included a dedicated work station concept, and a fresh, brighter design in the Intent.

Winnebago could have easily hired professional spokespeople or had their internal team show off their new lineup and features, but they chose GoLifers for a reason. We are people who live, work and play out of our RVs. Winnebago wanted our real-life impressions and they wanted us to be the ones to share in the excitement of seeing these products for the first time. 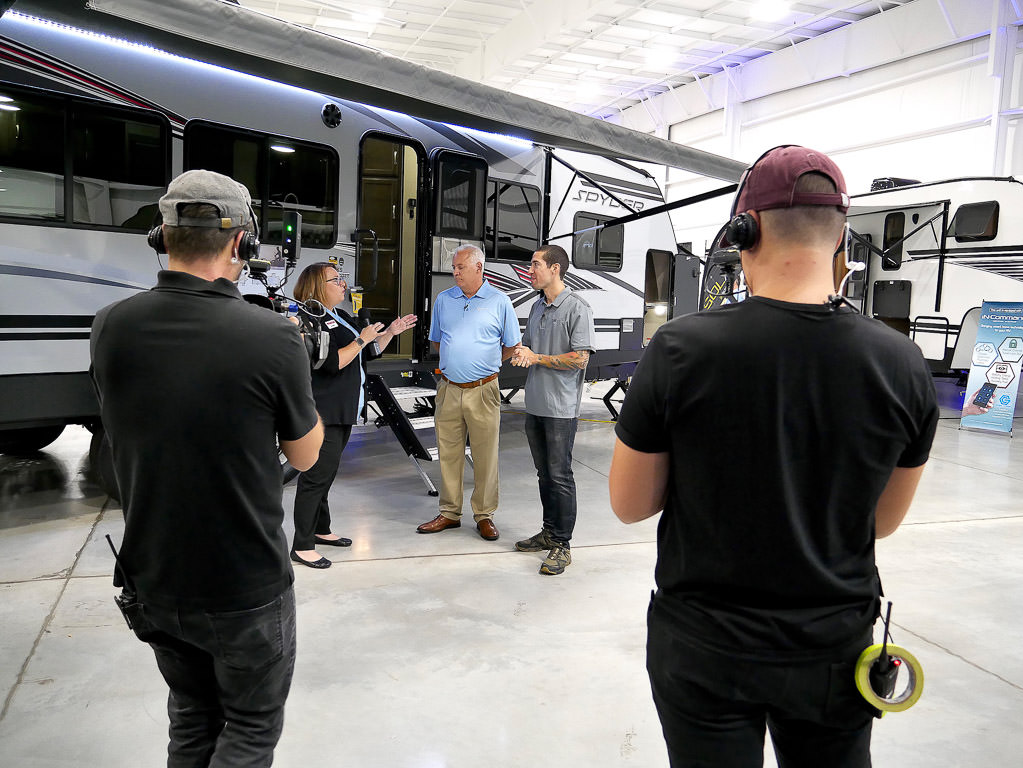 I flew in on a Sunday afternoon, met up with Jon and Nadia at the hotel and the three of us jumped in my tiny rental car to head over to the show to see what Winnebago had in store for us. Our excitement was over the top - so much so, we missed a few turns on the way and got lost. The three of us, who live in RVs and travel tens of thousands of miles a year, got lost on a 25-minute drive down the road, but that's how excited we were to see the new products and be the ones to get to introduce them!

We arrived at the Winnebago display and realized this was on a much larger scale than we first realized. There were at least 75 RVs on display outdoors. Everything was there, travel trailers and Class B vans all the way up to the massive and impressive diesel pushers, like the Horizon. 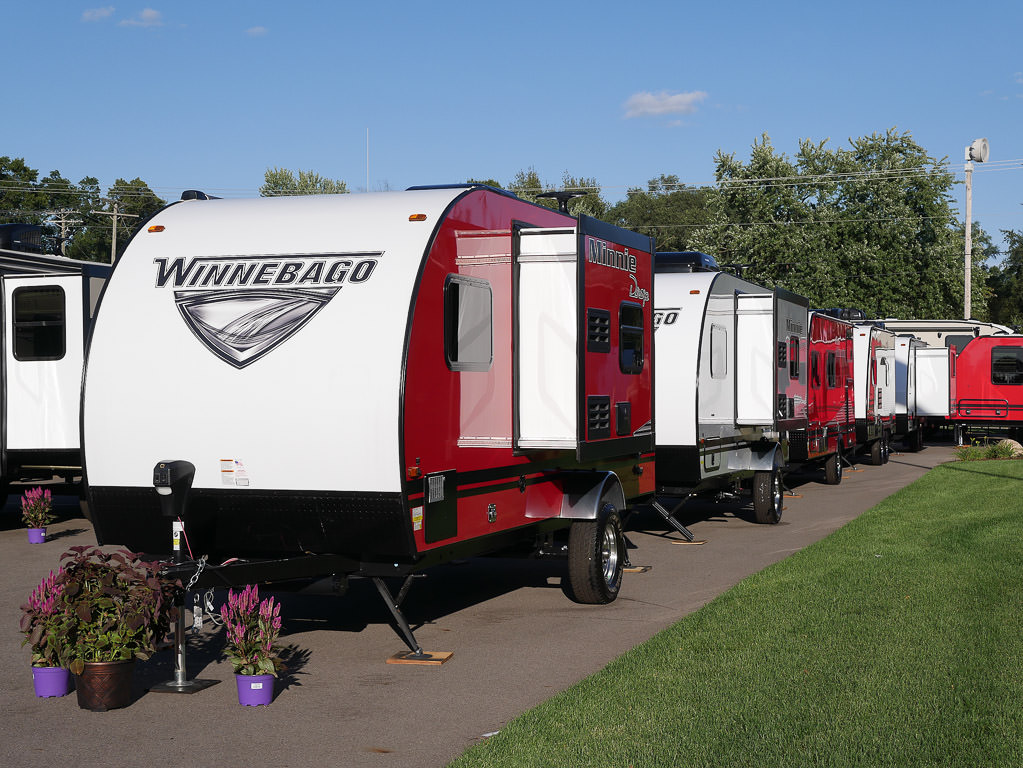 I felt like a kid in a candy store and I wanted to jump in each RV and take a look, but we knew there was work to be done first. So, we went inside where we were greeted with even more displays and the top-secret new products.

The marketing team saw us enter and came over to say hello and thank us for coming to Elkhart to do the event. We then met the Armosa Studios crew, who would not only be doing all of the filming, but they would also be the ones helping us stay focused and on point during the live shows.

I had never done anything like this before and I was anxious to get started. We first did some practice runs with the film crew, where they directed us as to where we should stand and how to keep out of each other's way while navigating through the RVs. 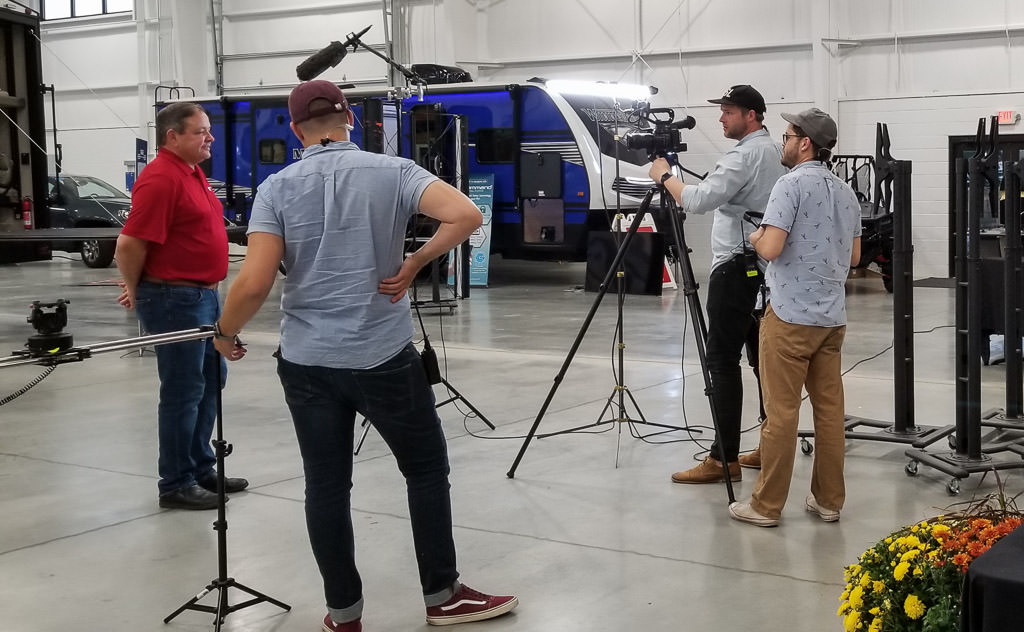 This was the first time we were allowed in the new products and, I have to admit, it was tough to stay focused while seeing the new RVs with all of their cool features. We wrapped up for the night feeling pretty confident that we were all on the same page. But, I was so excited, I couldn't sleep and instead wrote notes about everything I saw that impressed me, in preparation for the event. It was a long list! 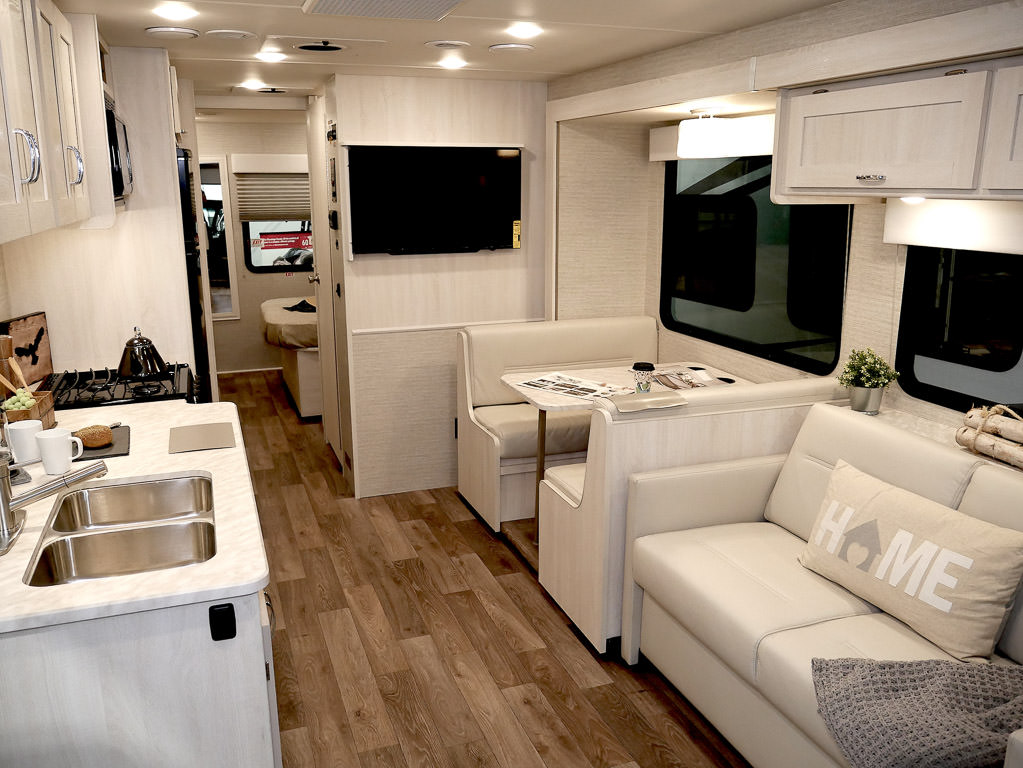 Even though I did not go on live until 1 p.m., I woke up early the next day to watch Jon and Nadia go on at 9 a.m. I remember thinking to myself during their presentation that they were so smooth, and I hoped that I would be able to deliver the information to the audience as well as they did. They wrapped up the first live event without a hitch and we were on our way. 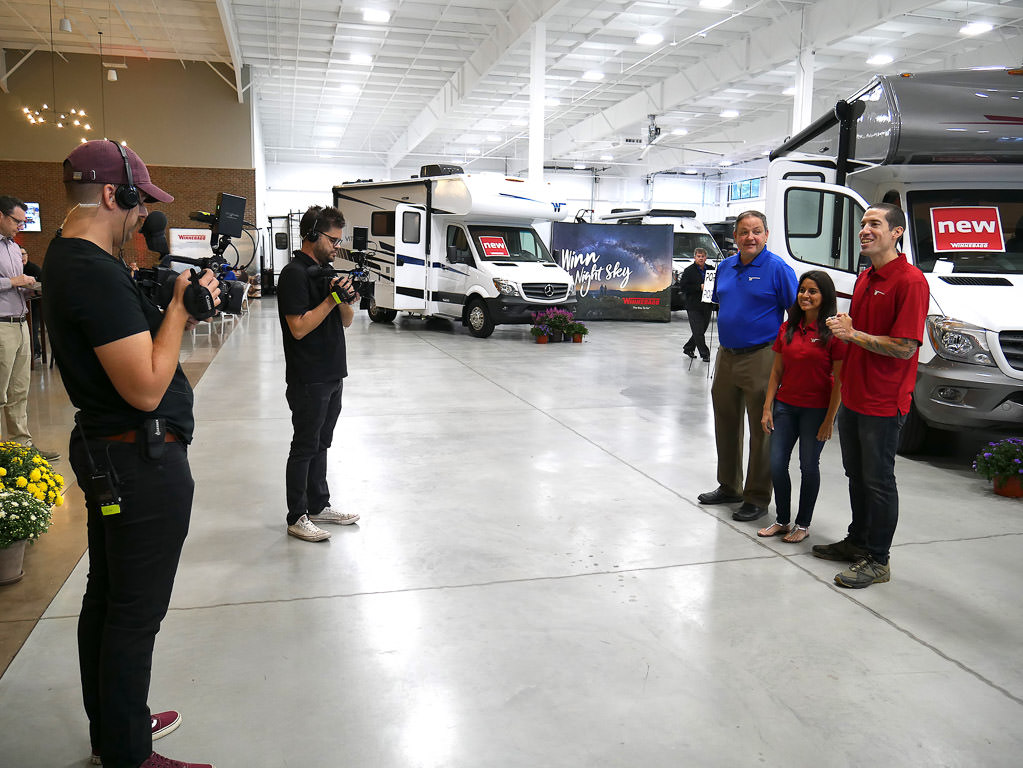 The next few hours went by quickly and it was soon my turn to go live. I met Niles Whitehouse, the Class A product manager, and we exchanged a few notes of what we thought were important to showcase. The film crew yelled out "going live in sixty seconds" and my nerves started to get the best of me. I even thought I was going to pass out.

Luckily, I didn't and after a quick stumble on my first couple of words, we were chatting comfortably. I think Niles and I both really enjoyed showing off the new Adventurer. With so many cool features, the time flew by and we suddenly found ourselves needing to wrap up the segment. 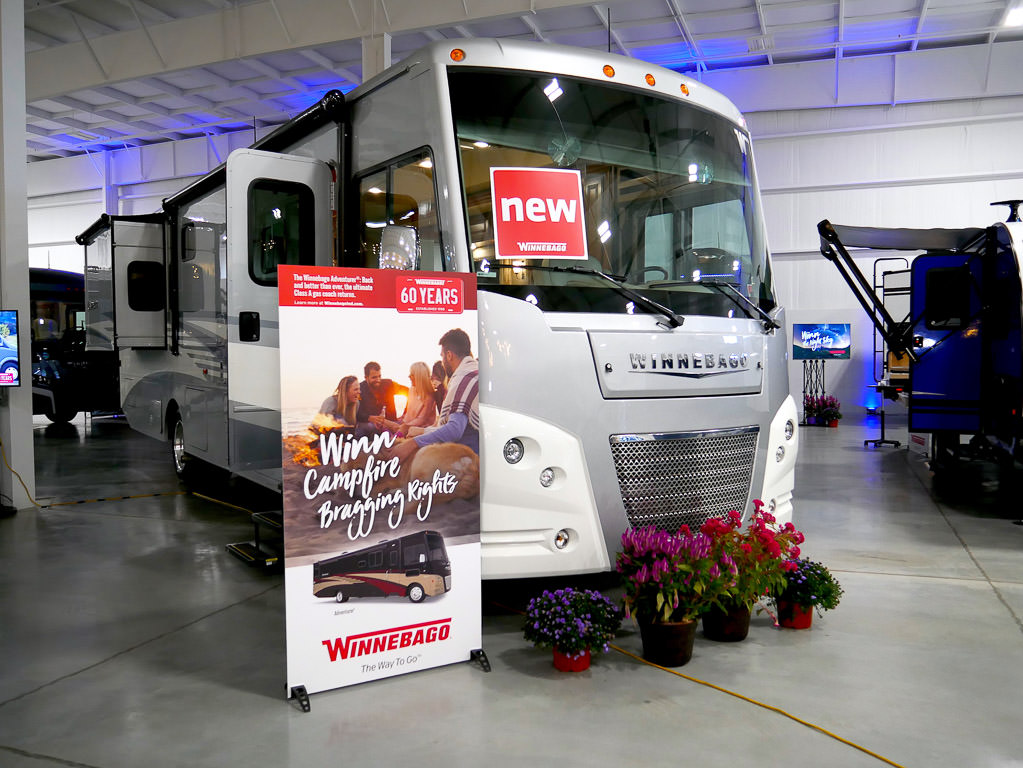 We did several more live events the following day, and one thing was certain through the entire event - everyone was extremely professional and level-headed, especially the Armosa Studios film crew. Big hats off to them for being able to adjust and think quickly on their feet.

The entire week went by fast. When we were not on camera, we were preparing for our next live event. Jon, Nadia and myself would also walk around and check out all of the RVs. I was finally able to be that kid in a candy store! 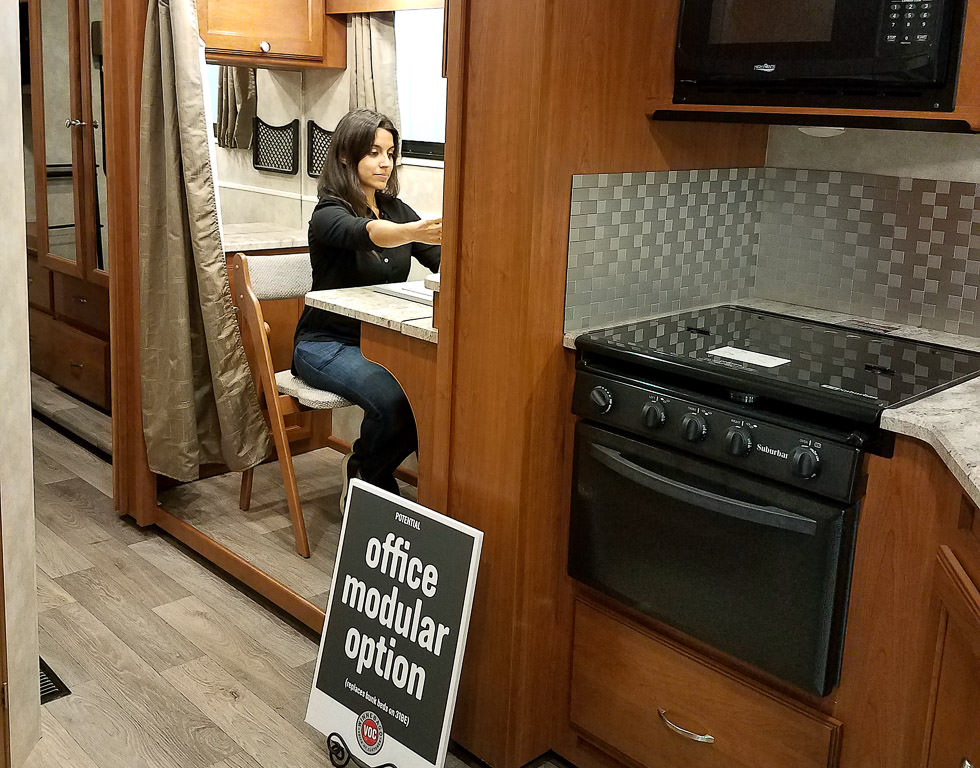 The overall experience of the week was amazing and one I will never forget. I met so many fantastic people, and one thing that really stood out to me across the board was how passionate everyone was about Winnebago, from the product managers to interior designers to the marketing teams. They enjoy creating and sharing these products. They want people to not only love the RV, but also the lifestyle. The Winnebago team didn't feel like co-workers to me that week, they felt like family and I think that shines through in what they create and how they share it. 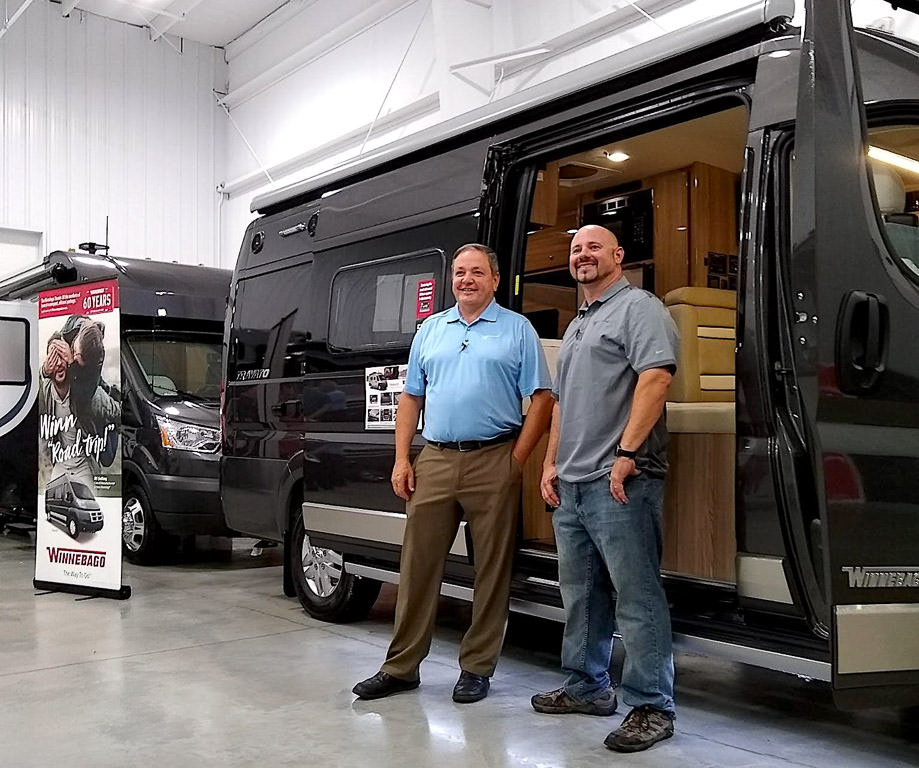 I hope you enjoyed this behind-the-scenes look from my experience as a presenter at the open house launch.