Why Hire an RV Inspector?

When Sabrina and I started shopping around for our first RV, we quickly realized there was a lot of equipment that goes into one -- from mechanical to electrical to plumbing! So when we then decided to buy a used RV, we were even more concerned about how we would be able to recognize potential problems. We did not know how all the systems worked and we sure wouldn't have known if they were working properly just by having a salesperson walk us through the RV while we were distracted by the floorplan.

Self-Inspection of RV vs. Hiring a Professional

We continued shopping and hoped by the time we found an RV we would know enough to do a thorough inspection ourselves. That was the plan anyway, until we found one in Ohio 400 miles away from us. It was the perfect match for what we were looking for, a 2016 Vista with only 5,000 miles on it and it was priced $10,000 less than anywhere else in the country. Our first thought was, "What's the catch?"

We contacted the dealer in Ohio, Shafer's Truck and RV Sales, and asked for additional photos and more info on the RV. Everything sounded too good to be true. We heard the RV Geeks mention in one of their YouTube videos that when shopping around for an RV to use a third-party inspector before you purchase one. We did not even know that was a possibility!

We then did an online search for RV inspectors and found the National Recreational Vehicle Inspectors Association (NRVIA) website. There we found Rick Amos, an inspector in Ohio that would be able to drive out to the dealer for us and look over the RV. That was huge for us! This saved us the time and the cost of traveling out of state for an RV that could have been a mess in disguise. We also liked that the inspector had no emotional attachment to this RV and his mission would be purely fact finding. We really wanted this to be the one, which could have blinded us to potential problems if we had tried to inspect it ourselves. 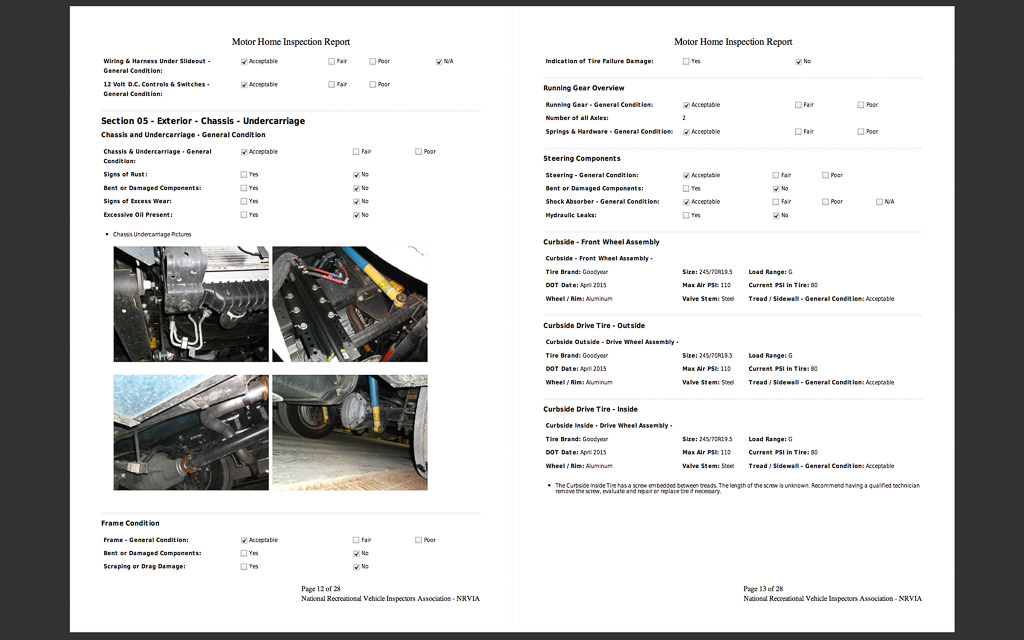 We liked that not only were there check boxes, but photos of what was inspected as well.

Setting Up the RV Inspection

Sabrina and I talked it over and, before calling the dealer, we said if they did not allow the inspection then we should probably walk away from the RV. We contacted the dealer and they said it was not a problem, just let them know what day it would be and they would bring it inside and hook it up so the inspector could test it all out. Right away we thought that was a good sign. We did have to pay the dealer a $100 deposit to put a two-week hold on the RV, so no one could swoop in and buy it out from under us while the inspection took place. It would also give us some time to travel there and make the purchase if the inspection went well.

We emailed Rick and he took over from there, setting up the time and day of the inspection. All we had to do was wait to hear what he found out about it ... hopefully nothing bad. Rick emailed us at the end of his inspection day and said it went well and he would have a full report for us within the next two days. That actually made us nervous. We were thinking what did he find that would take two days to put together in a report? 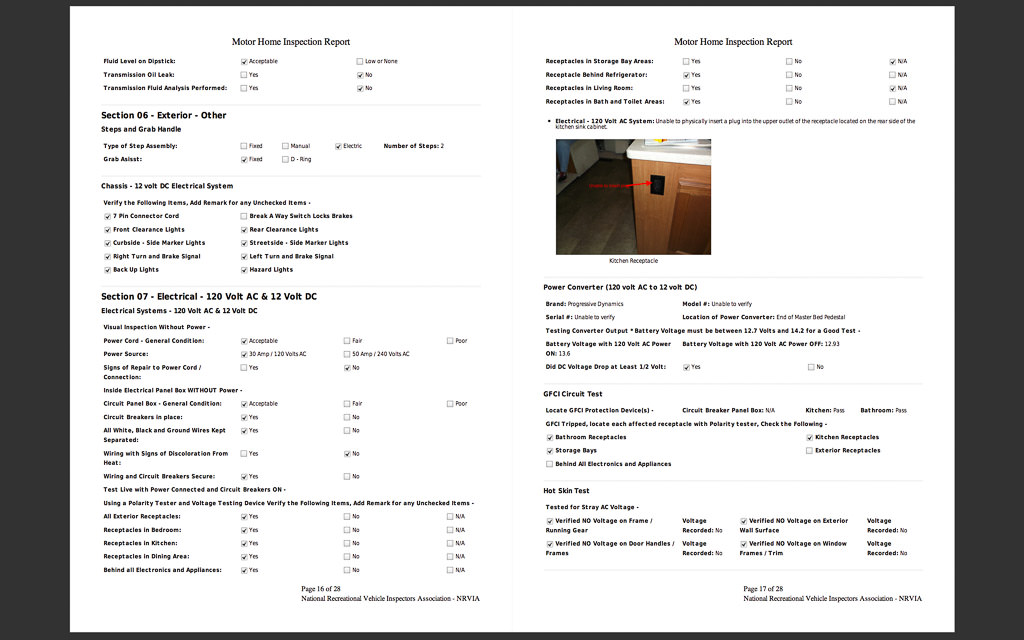 One of the many detailed pages of the report and a photo of an outlet that was not able to be used.

The report came in and wow was it detailed. This report was amazing. He inspected things that we would have never even thought to check. Overall, he only found minor issues with the RV and he also had photos documented in the 28-page report. We were very happy with Rick's findings. Not only did he give us plenty of information to help us comfortably move forward with our decision to buy, but we learned so much about our RV that day.

We called the dealer and told them that Rick had found a few items. The dealer told us that Rick spent 9 hours looking over the RV. We had no idea that he had put that much time into it. The dealer asked us to send a copy of the report and they would take care of everything that was found. 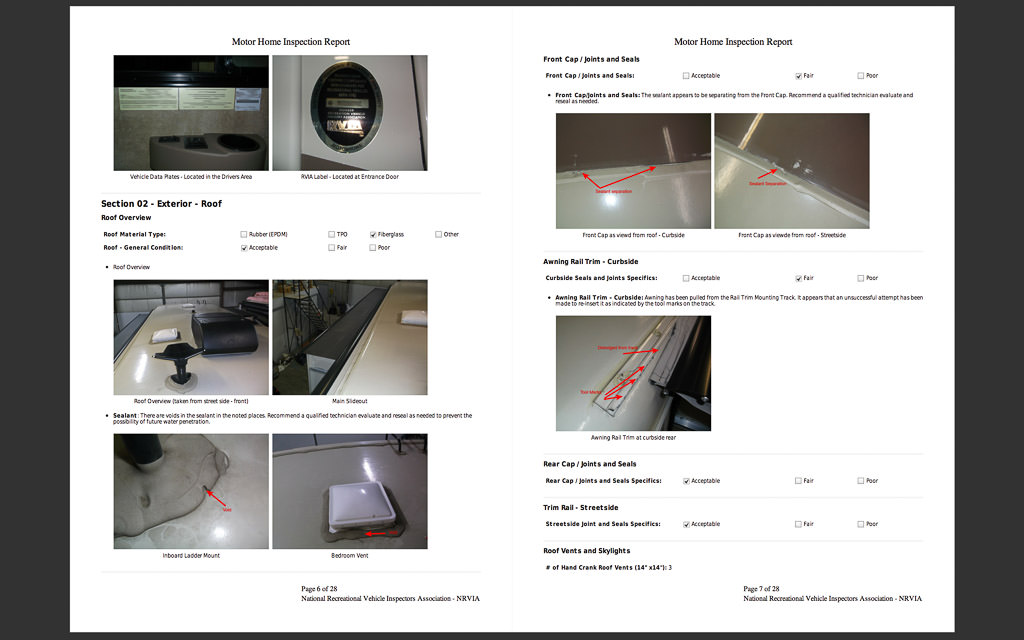 The inspection cost us $500 and it was well worth it when you consider the price of an RV and how many horror stories there are out there of RV failures shortly after a purchase. We would have never been able to do this level of inspection on our own.

We kept thinking sticks-and-bricks homes are inspected before purchase, so it only made sense to have a big purchase such as this also inspected. Luckily, the RV did not have any major issues and has proven to be a great buy for us. We are about to hit 20,000 miles on our Vista and have only had minor issues caused from shaking and rattling down the road. 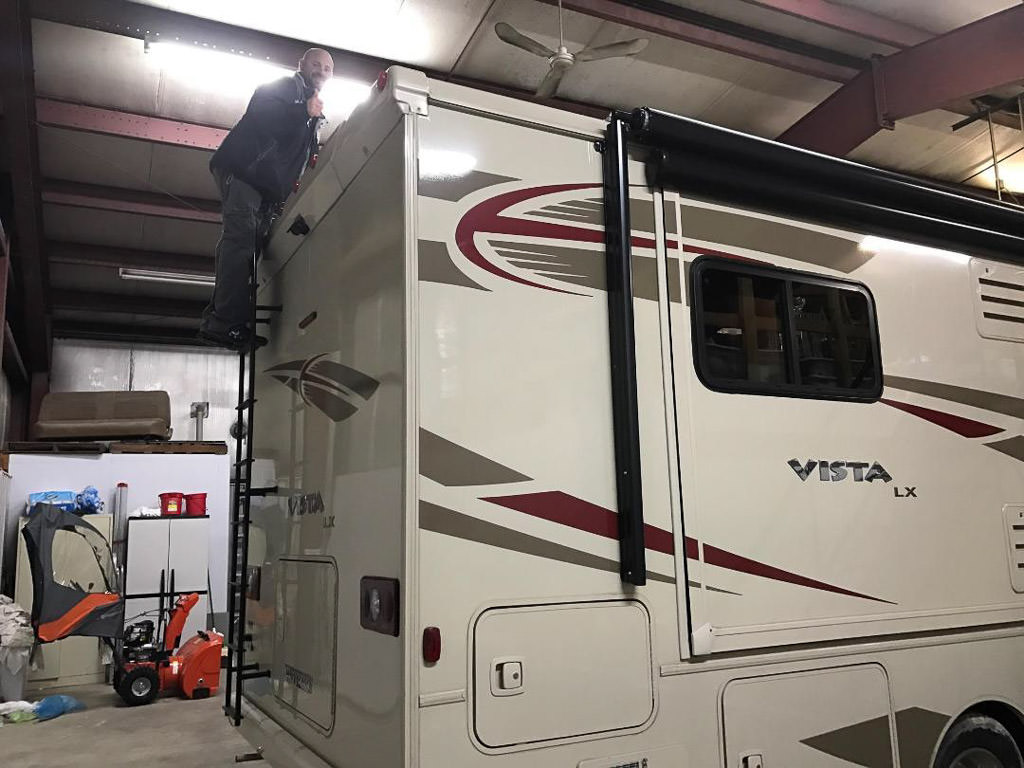 When we arrived at the dealer, I was able to use the info from the report and check that all was fixed as promised.

If you found this article helpful, we also have a Youtube video about the inspection.