There's an old adage among sailors, "What constitutes a sailboat race? Two boats in the water!" The same can be said for RVs. But then, when it comes to the View/Navion group, we seldom limit ourselves to two, and the only race is one for fun. 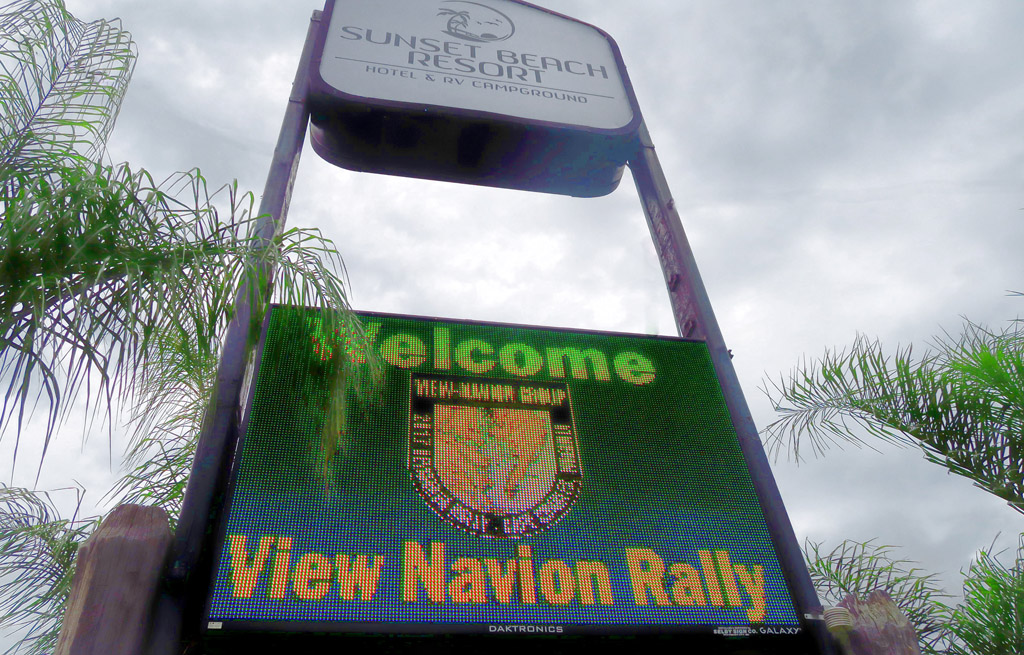 The Skinnie Winnie group, Winnebago's line of Class C RVs built on the narrower Sprinter chassis, is known for being a close-knit association, often akin to a cult following. Support and social groups on both Yahoo and Facebook, along with rallies from coast-to-coast make for a multitude of opportunities to meet fellow owners with mutual interests. Heading into summer, the much talked about place to be is Sunset Beach RV Resort south of Cape Charles, VA. This was the site of the Delmarva (Delaware/Maryland/Virginia) View/Navion 2017 National rally. 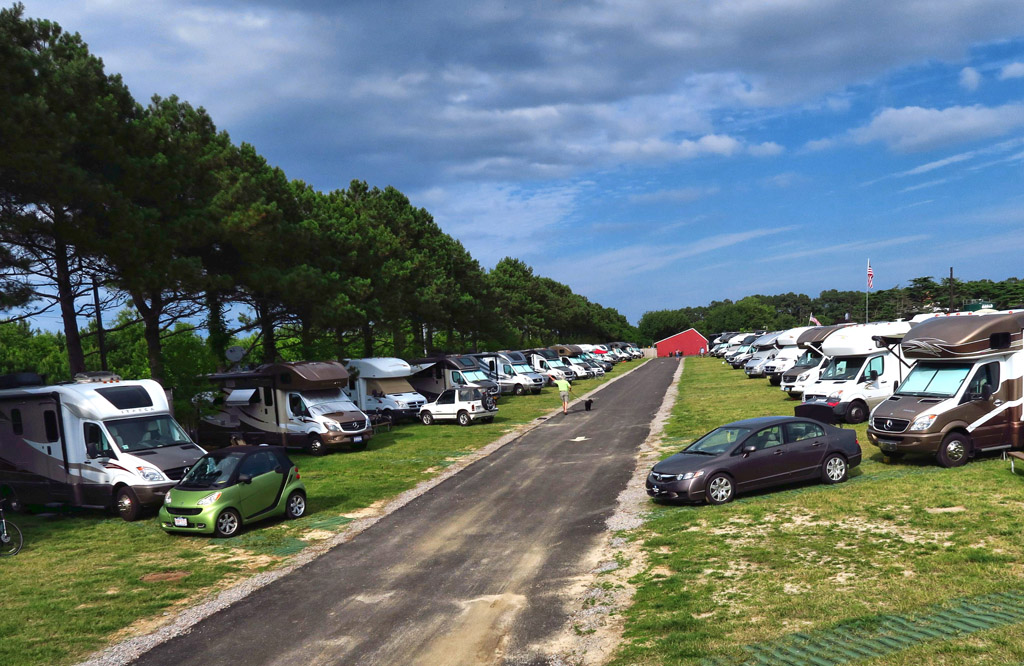 If you're like me, a self-proclaimed introvert, the thought of an RV rally with 64 rigs converging to meet and mingle can be downright daunting. Just the mention of the word "rally" conjures up all sorts of ice breaker comedy themes in the making, from silly hat contests to conga lines. But not this View/Navion group. For some reason, this group seems drawn together for more than the love of ownership. Rallies go beyond the opportunity to meet active, fun loving, like-minded friends. They are also educational. And in the case of the Cape Charles rally, there's a whole lot of local Eastern Shore of Virginia culture thrown in as well. 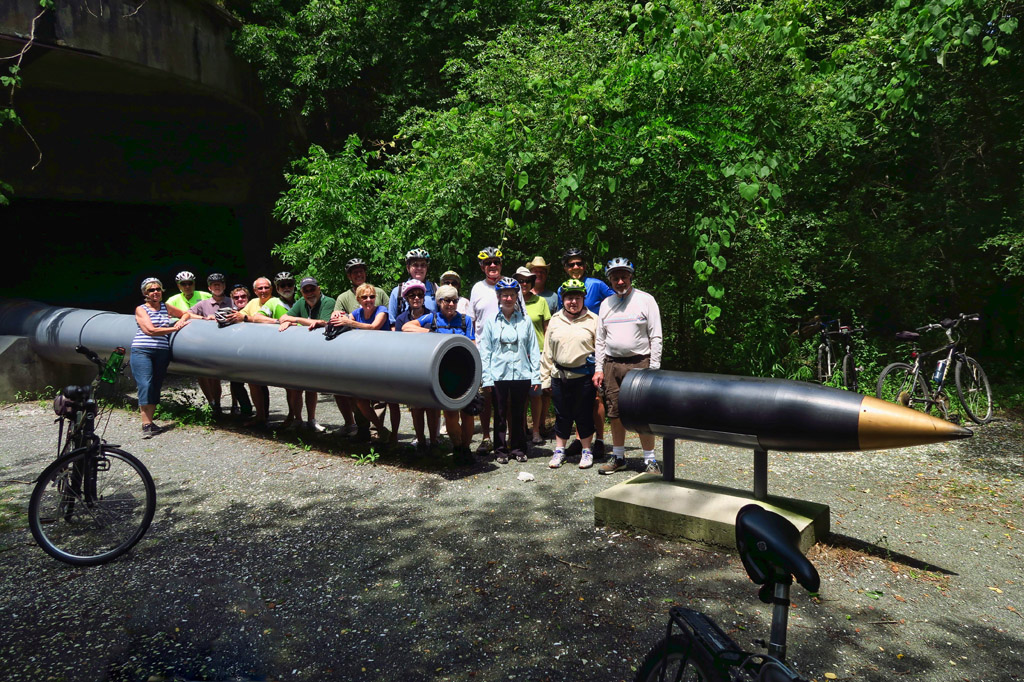 This summer's rally was hosted by Pamela Barefoot, founder of Blue Crab Bay Co. - local purveyor of classic coastal cuisine since 1985. That name alone tells us we are going to eat well. What better way to sample Blue Crab Bay Co.'s tasty offerings than with Virginia's finest locally-grown oysters on the half shell dipped in Blue Crab Bay's spicy cocktail sauce. Over 400 oysters were shucked by our very own View/Navion crew. Aquaculture-grown oysters and clams are prolific in this region, with Virginia raising more oysters than any other state on the Eastern Seaboard. 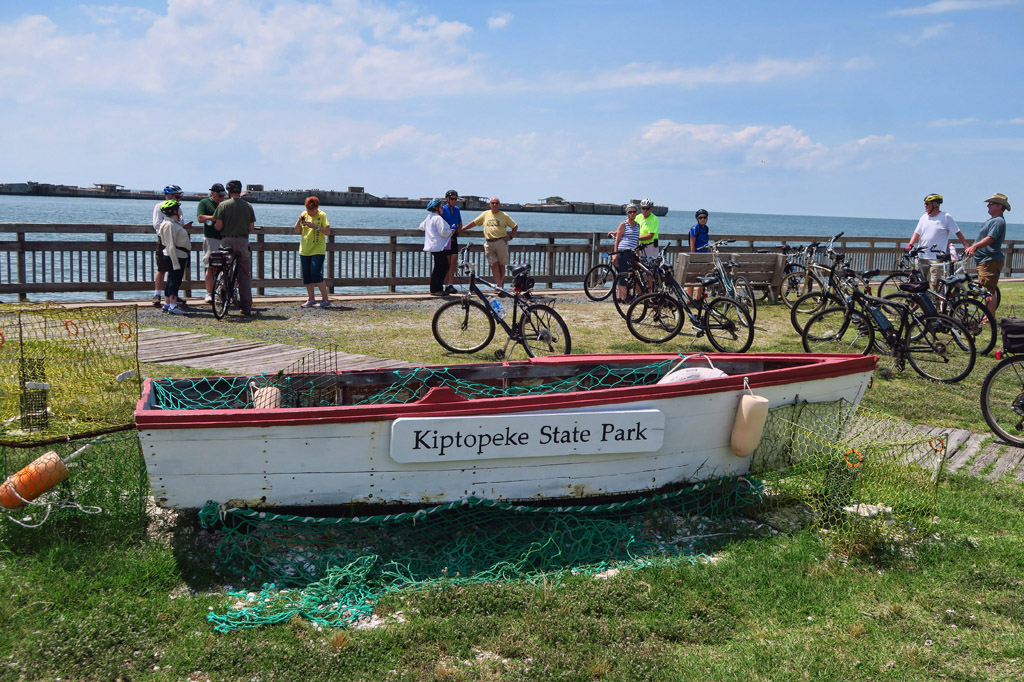 Kiptopeke State Park, with nine concrete ships from the WWII 'Concrete Fleet' in the background, now serving as the Kiptopeke Breakwater.

Rallies are notorious for their pot luck dinners, but this group takes dining to a whole new level. Rarely do you find a store-bought item, as View/Navion owners love to show off their convection oven skills with items like baked brie in puff pastry and homemade strawberry rhubarb pies. This year's summer picnic theme features locally sourced fried chicken, salads, corn, and all the trimmings. 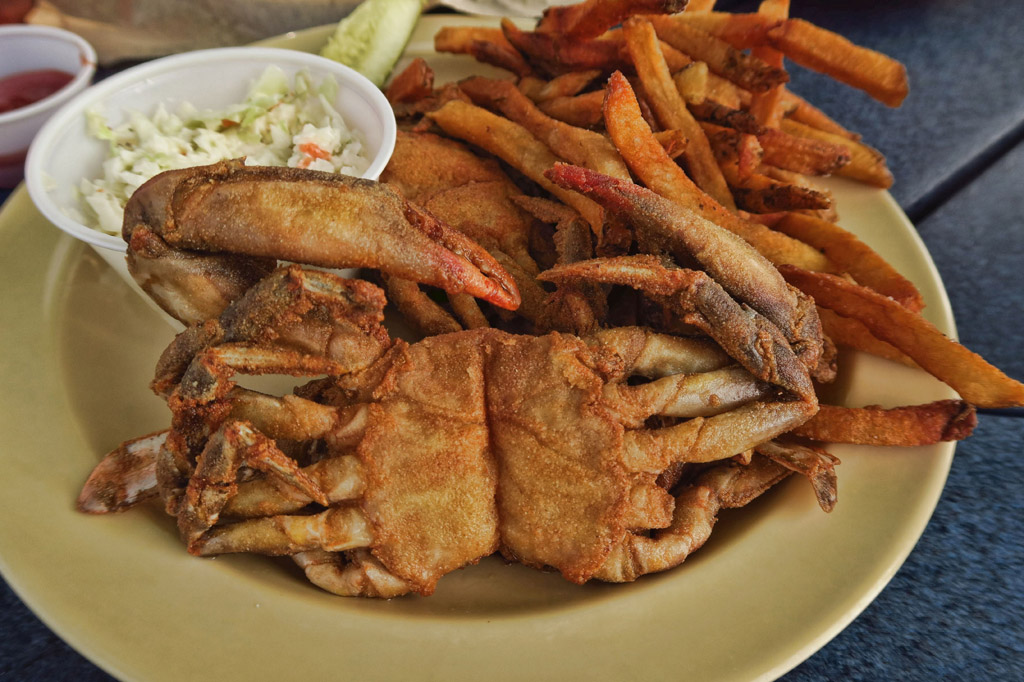 Soft Shell Crabs are a frequent special on the menu at the Jackspot, Sunset Beach RV Resort's beach-side bar and restaurant.

The rally venue, Sunset Beach RV Resort, located right on the cape of the Eastern Shore, lives up to its name, offering spectacular sunset views. Positioned at the tip of the thin sliver of land between the Chesapeake Bay and Atlantic Ocean, Sunset Beach RV Resort offers a plethora of activities for the entire family. It's hard to imagine a better venue for an RV rally. Full hookups, a beautiful pool, beachside bar and restaurant, sandy pet-friendly beach, guided kayak tours through the Eastern Shore National Wildlife Refuge next door, shopping and restaurants in historic Cape Charles, and two championship golf courses nearby warrants the overall consensus among rally goers that "there's something here for everyone!" 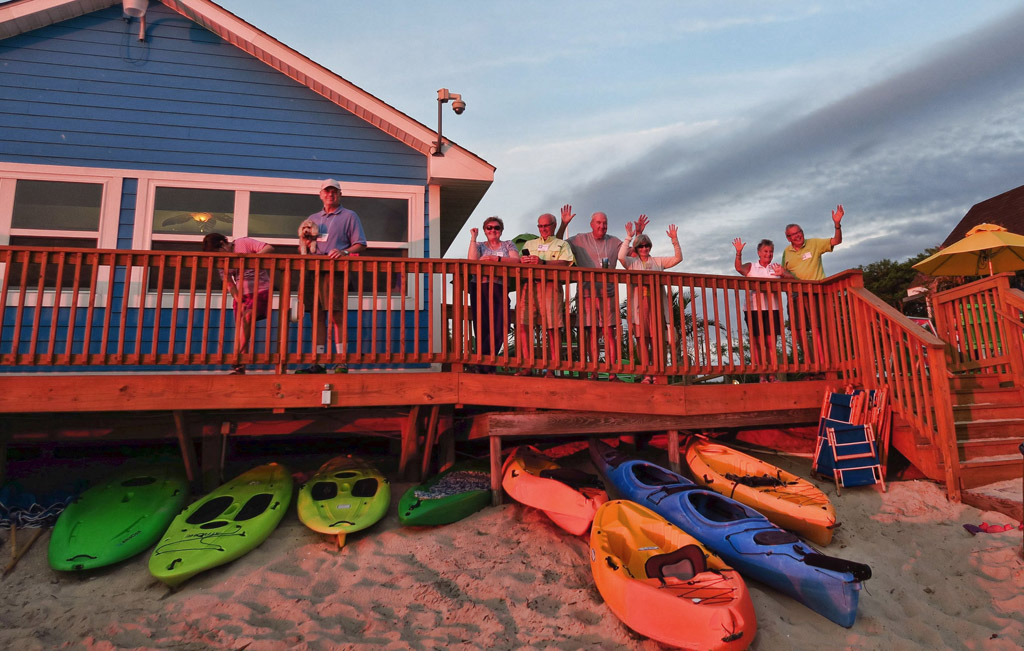 Just one-half mile south of Sunset Beach RV Resort sits one of the Seven Engineering Wonders of the Modern World, the Chesapeake Bay Bridge-Tunnel. By special arrangement, the CBBT offers tours of the facility on one of the five man-made islands. Rally participants are taken through the control room down into the tunnel itself, passing alongside 12-ft fans in operation since the bridge first opened to traffic in 1964. Standing on the pedestrian walkway, we laugh like mischievous kids again as we signal for a horn honk from the passing 18-wheelers. 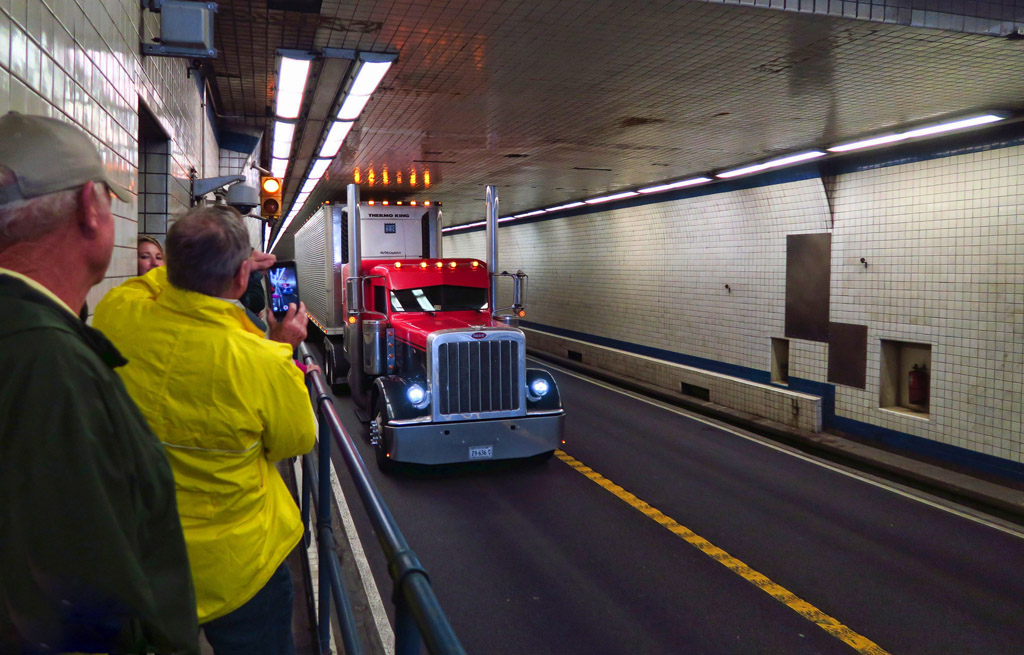 The CBBT is soon to undergo an expansion, the Parallel Thimble Shoal Tunnel Project, adding an additional concrete tunnel in parallel to the steel tunnel in existence today. Slated for completion in October of 2022, the new bored tunnel made from approximately 9,000 concrete pieces one mile in length will allow two-lane traffic in both directions, allowing for smoother traffic flow with less risk of lane closure. Unfortunately, the tunnel project will necessitate demolition of the CBBT waterside restaurant, The Chesapeake Grill and Gift Shop, in September of this year. If you are in the area, don't miss the opportunity for a bit of history to dine overlooking the bridge and tunnel entry. 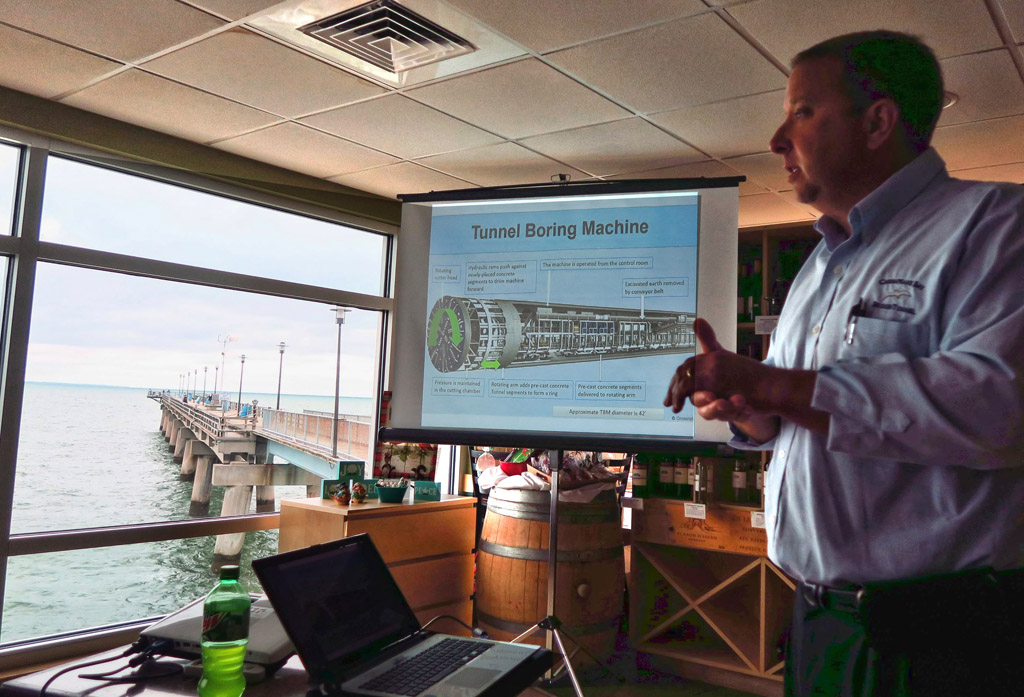 A rally is also an excellent time to learn more about your RV, from aesthetic ideas and modifications shared during the Open House to the highly technical "Understanding Your Electrical System" workshop. There are ongoing tech sessions covering such topics as lubricating the RV steps and refrigerator maintenance. While hands-on demonstrations cover installing a Trik-L-Start to a complete solar install. As small groups assemble, the running joke around the park is "If you want to meet more people, just raise your hood!" 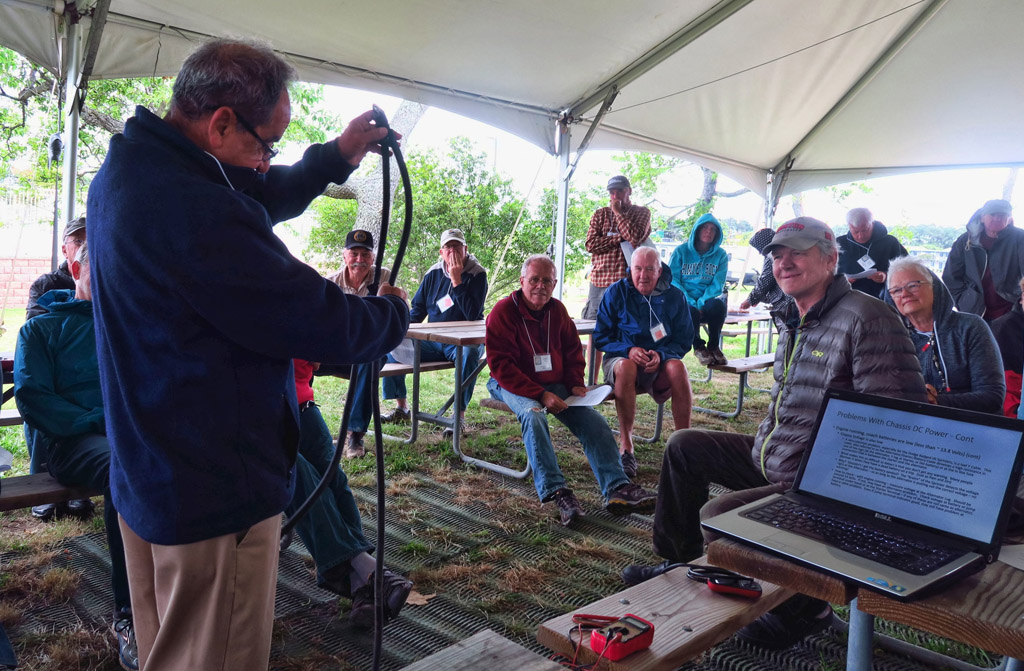 So, take this introvert's advice: If joining a rally feels akin to joining a cult, it's worth stepping out of your comfort zone. Whether your interest is making new friends, learning the tricks of a convection oven, or maximizing performance from your investment, don't miss the opportunity to rally around with like-minded people who share the love of the RVing lifestyle. And don't be spooked if 64 of them just happen to look a whole lot like you! 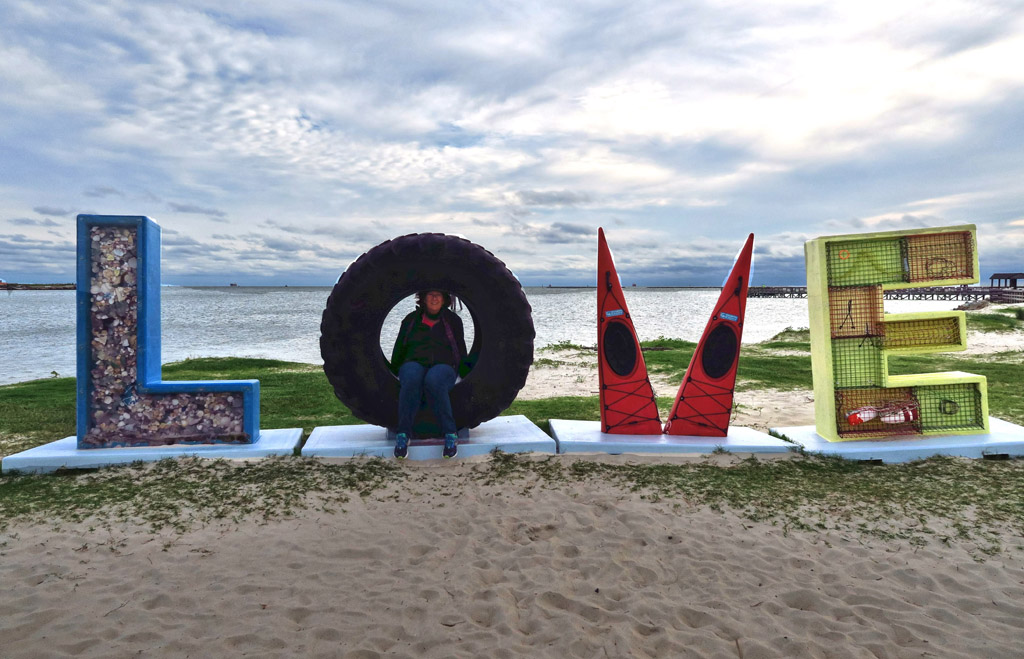 For information about future regional and national View/Navion rallies, consult the View/Navion "Skinnie Winnie" group on the Yahoo forum.

Learn More about the Winnebago View

Learn More about the Winnebago Navion