After a day of scouting locations with GoLife photographer, Peter Holcombe, I thought our work was over, but then after dinner Peter knocked on the door of our Navion and said, "Do you want to take the Travato up the pass and see if we can get a good night shot?" "Why not?" I thought.

One of the big advantages of driving up US 550 toward Red Mountain Pass south of Ouray, Colorado is that in the dark, you can't see the sheer drop off of the guardrail-less shelf road that is known as the "Million Dollar Highway." 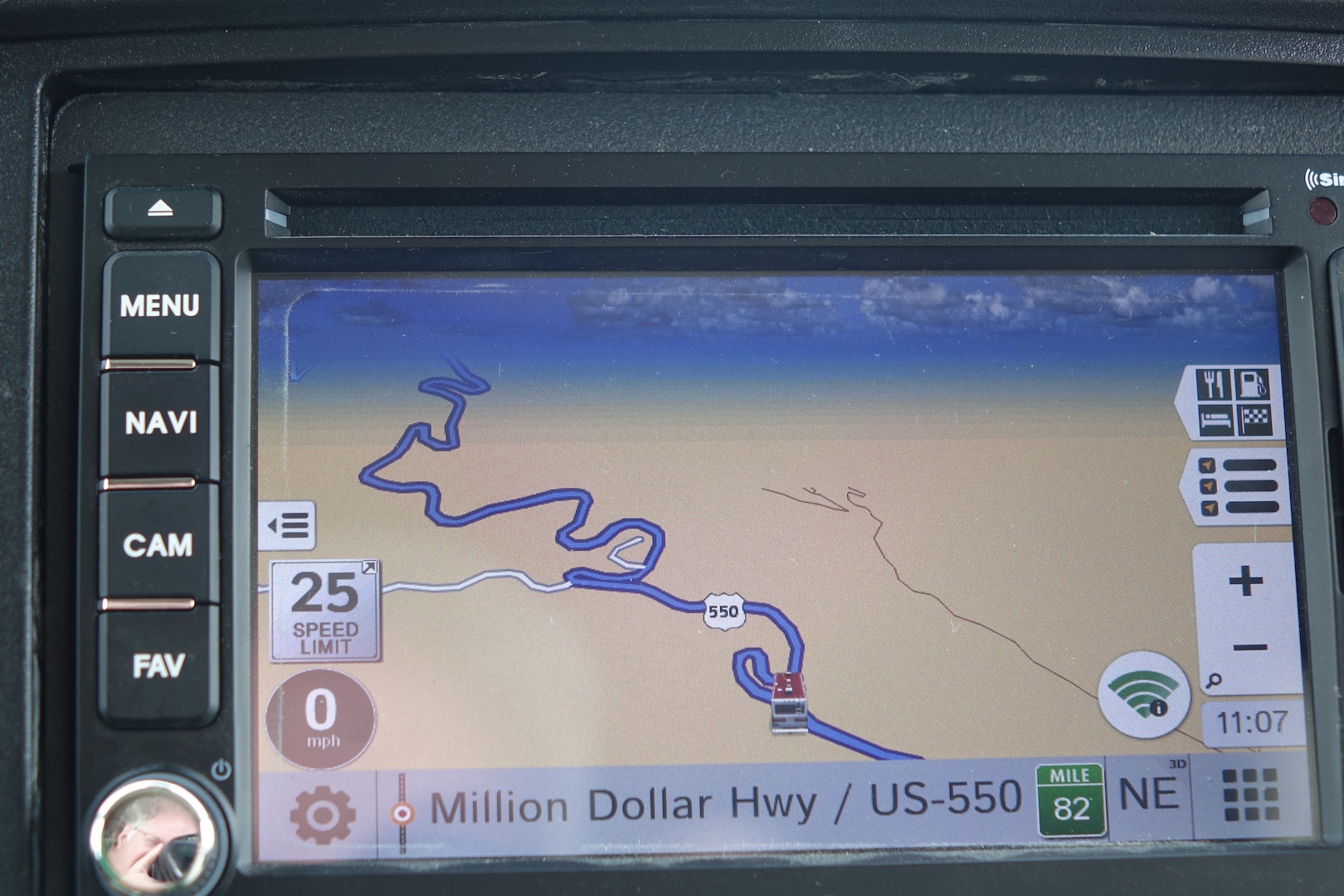 Putting the Winnebago Xite Infotainment GPS system to good use.

How the Million Dollar Highway got it's name isn't quite clear. Some claim it cost a million dollars a mile to build in the 1920's. Other stories claim that many would say that they wouldn't drive over the road even if they were offered a million dollars. No matter it's heritage, all would agree that it's one of the most scenic all-weather highways in America. Semis and Class A RV's routinely and safely traverse this epic byway, but there are usually a few fatalities on the highway each year.

A couple of summers ago we drove over the pass in our Navion while towing our Honda Fit without a second thought. Like other Colorado mountain roads you just need to stay focused on your lane and save your sightseeing for the wider and less winding spots. 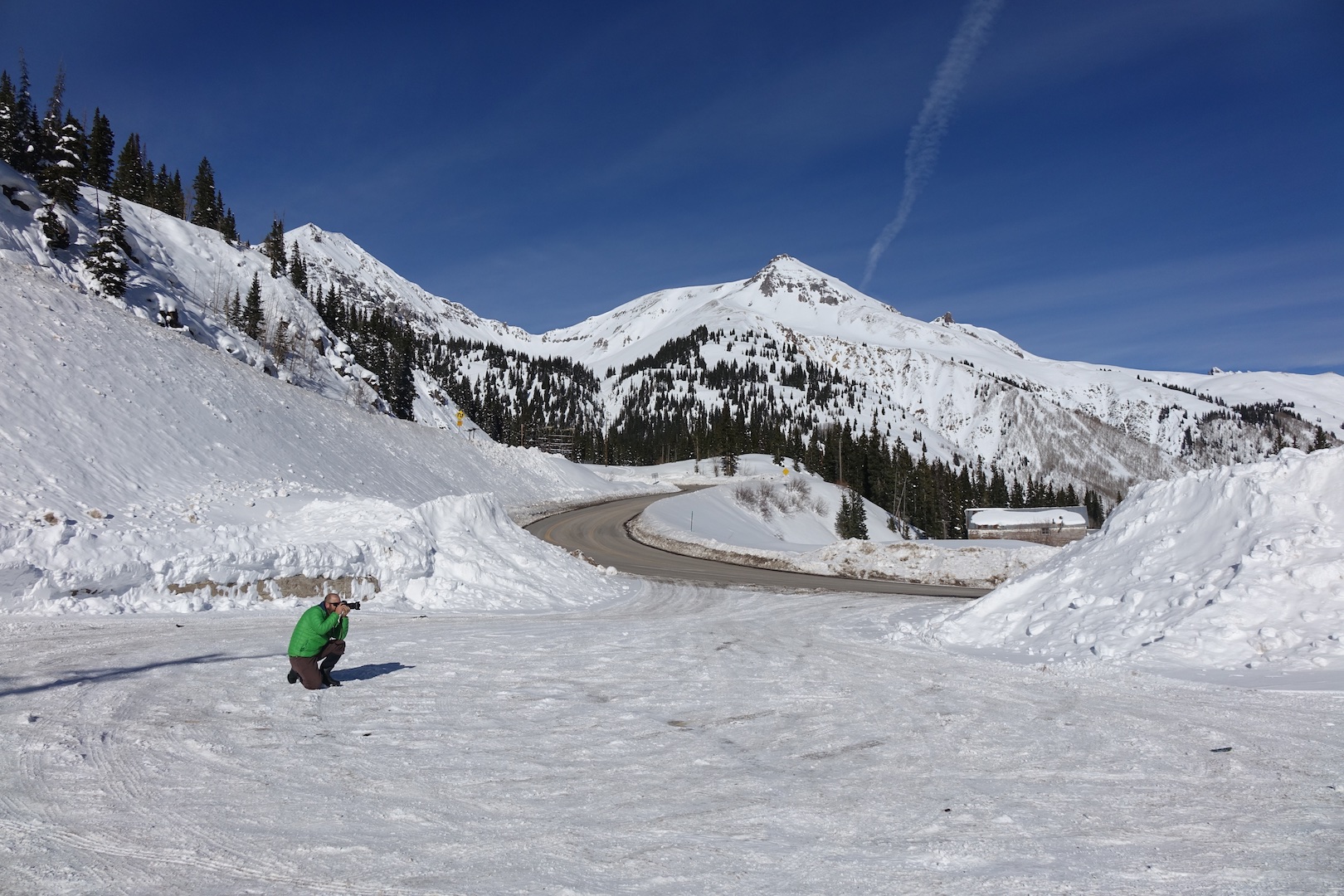 Earlier in the day we had pulled the Travato into a plowed lot near a non-working mine and taken some reference photos. Though he didn't say anything at the time, Peter must have been making mental notes about returning under starlight. And that was the interesting challenge -- how do you take a picture of a dark gray Travato simply under starlight?

Well the answer to that is what separates the true working pro photographers from the rest of us good travel shooters. It takes a lot of practice, trial and error, and planning to make the near invisible, visible. 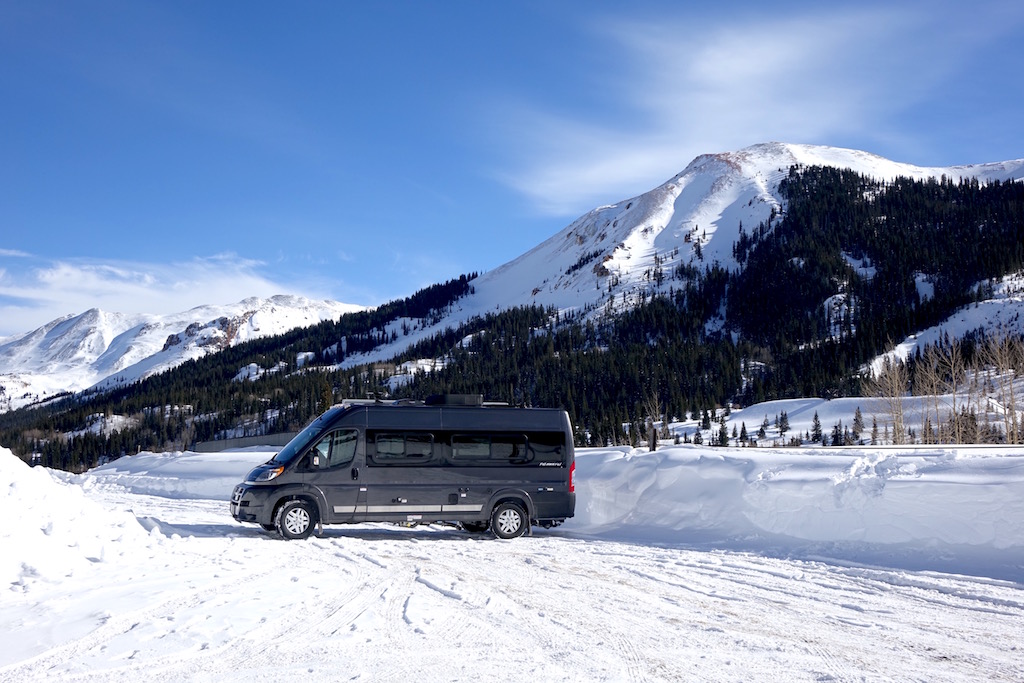 It looks different during the day. This is where we returned for the night shot with the Travato rotated 90 degrees against the snowbank.

We aligned the Travato next to a snow bank in front of us with the mountains in the background. Peter set up his camera with a tripod low to the ground about 50 feet away. Behind us was a six to eight foot mound of plowed-up snow.

Peter started with a reference time exposure just to see how the ambient light and stars would show up. Next he had me wave a flashlight from the front to back of the vehicle as if to "paint" with light. None of those techniques matched what Peter was seeing in his mind's eye. Peter walked back to the Travato and pulled a small flash out of one of his equipment bags.

"Let's try this," he said. "I'm going to walk about 20 feet to the right and you press the shutter. There will be a two second delay and when you hear the shutter click open, shout out to me." When I cued Peter he turned the flash away from the Travato and towards the snow pile behind us. He quickly moved another ten feet and flashed again. During the thirty second time exposure Peter fired the flash from five locations from front to back paralleling the Travato. We repeated this process about ten times where Peter would vary the exposure adjustment on the camera and where he positioned the flash.

Unlike the not-so-good-old-days where you shot and hoped for the best while the film was at the lab, the digital display on the back of Peter's Canon gave him a reasonable idea of what he was getting. The final exposure mixed starlight, flash, a gold shaft of light from the adjacent mining equipment garage, and the Travato interior lit only by the glow of the in-dash GPS screen.

We were done in about an hour and in between takes I'd taken the time to feel the crisp (but not bitter) cold of the thin mountain air. Looking up at the starry canopy it was easy to see the river of stars of the Milky Way wrapping from horizon to mountain peak. The deep blanket of snow seemed to drain all sound from the valley, but when I closed my eyes, I could occasionally hear the faintest whisper of a small puff of breeze through the pines higher up toward the pass.

Driving back down to Ouray our conversation wandered between new photo technology and stories of other nighttime mountain adventures. Returning back to our rigs at the Ouray RV Park I was thankful that we had such a good weather window of clear skies for the evening. My day was now over, but Peter still had a few hours to go in downloading, reviewing, and adjusting the evening's "catch" on his MacBook. And what a catch it was! 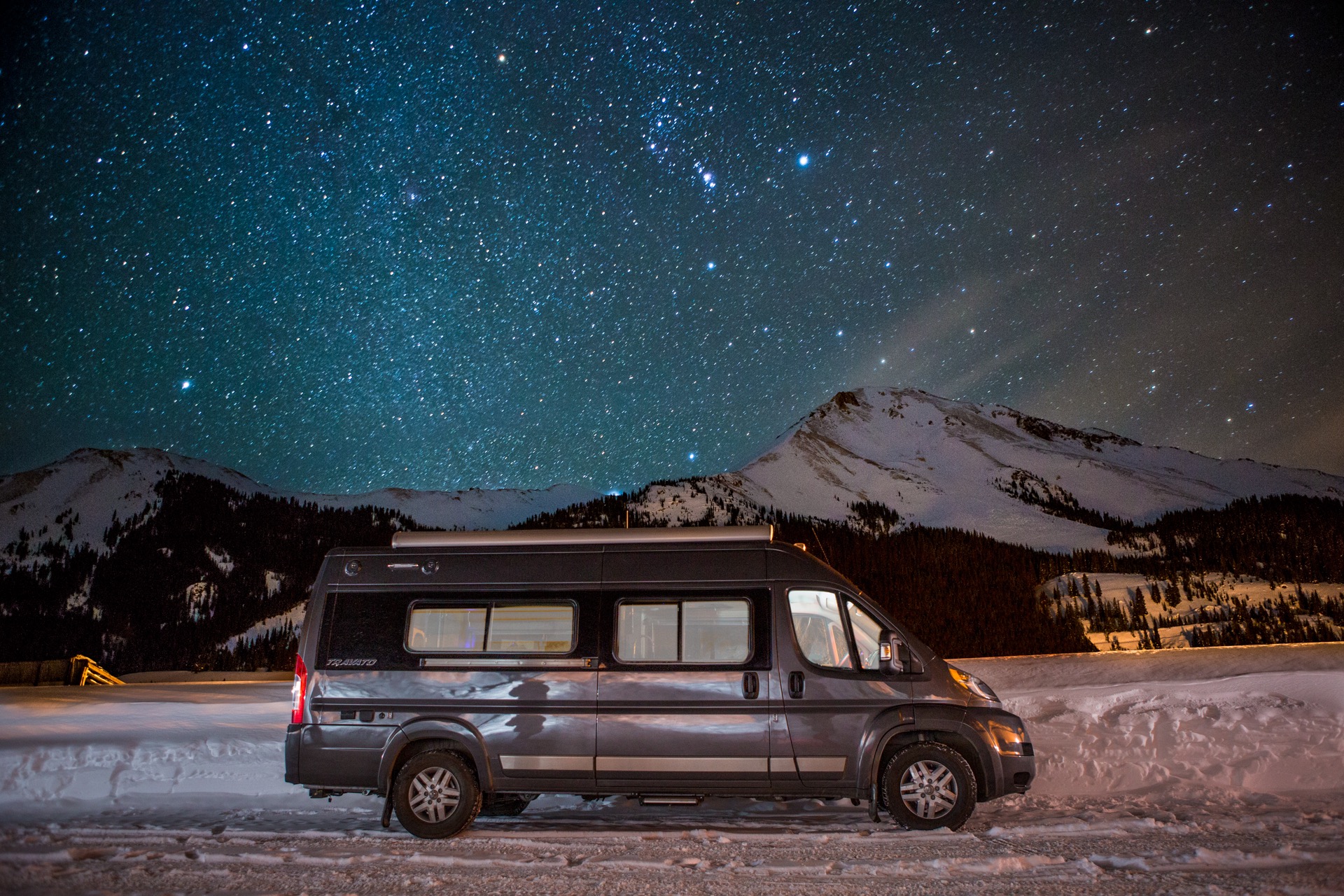 Look closely for Peter Holcombe's "Alfred Hitchcock moment" can you spot him in the photo?