Matthew McConaughey and I have a lot in common, and not just the movie star good looks. For one thing, we're both fans of Matthew McConaughey. Also, we're both head over heels about the joys of a house on wheels. So I decided to seek him out and inform him about our commonalities. Or at least I tried. Perhaps I should explain, and maybe I should start from the beginning.

(Oops! If you clicked on the 9/10/2016 GoLife newsletter link for condensation prevention in your motorhome, click here to go to that article. ED)

I mean, the real beginning. A couple of decades ago, Amy and I set off on our first RV journey--a 48-state, 314-day adventure in a Winnebago Adventurer. We had never set foot in an RV before, save for a 20-minute test drive just before we bought one. And we had seen little of the country, having largely flown over the so-called flyover places that tend to be the best part.

A couple of weeks into our excursion, we were still unsure about the whole idea. Really? We have 300 days to go? And we still basically thought of the RV as a means to end--getting from Point A to Point B, comfortably.

But then we arrived in Malibu. Specifically, the Malibu Beach RV Park. 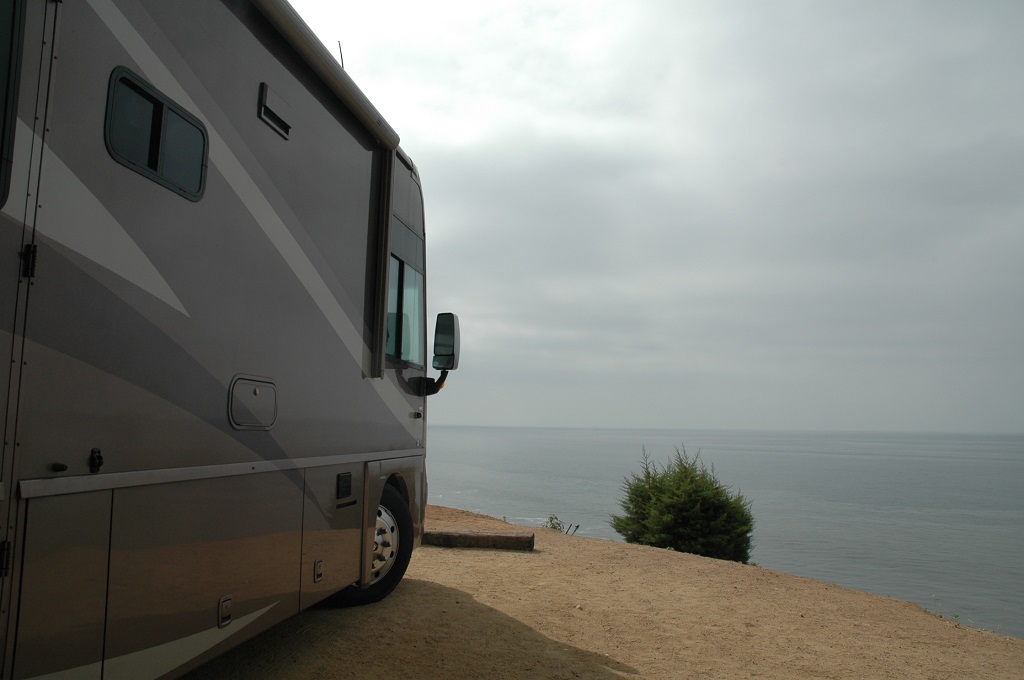 The RV park even has its own tagline, like a movie poster: "Where the summer spends the winter." Well, it was late December, and the park was relatively new, and there was hardly anyone there. So we got the prime spot--a corner site, a few hundred feet above the Pacific Coast Highway, with a million-dollar view of the Pacific Ocean.

Actually, probably a multi-million-dollar view. This was the spot. 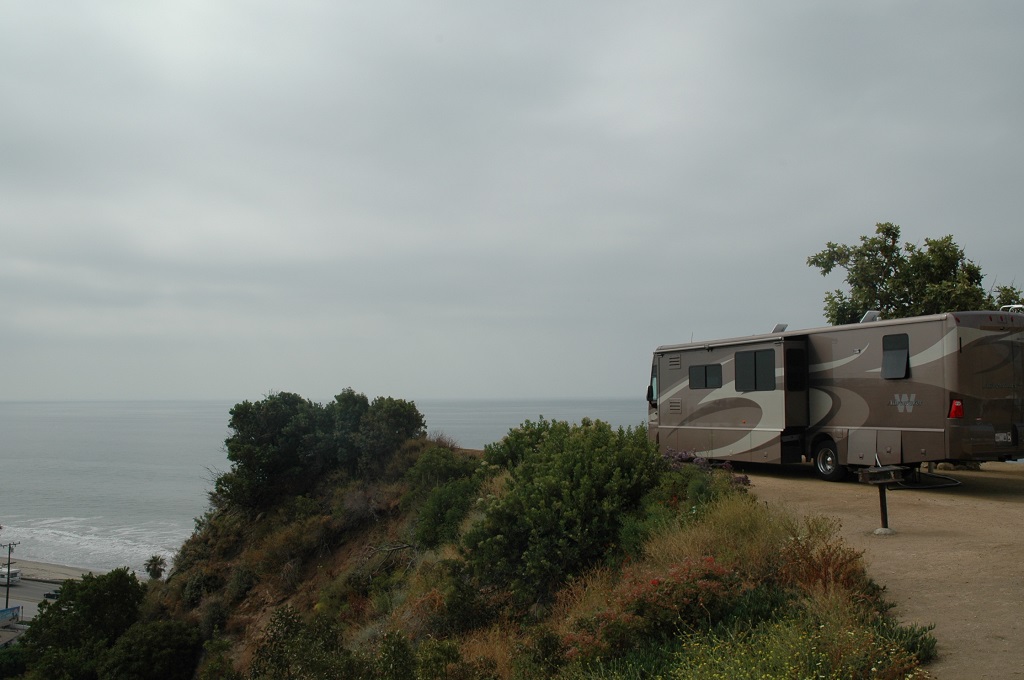 We were supposed to stay in Malibu only a couple of days. We spent a week there instead. And that was where we had our Grand Epiphany.

In a house on wheels, you can define the moment. The road is your oyster, the possibilities--camping beneath the redwoods or far above the waves--are your pearls. An RV isn't just a means to an end. It's not just a supporting actor in a feature film. It's the star.

Which brings me to Matthew McConaughey. But first, Tom Hanks.

Sixteen years ago, a relatively new magazine called In Touch put together a one-page article about how "families are hitting the highway in RVs and exploring America." The story included a half-page photo of Amy and me and our infant son Luke. Of course, this being In Touch magazine, where the adjacent stories were about baking cookies for movie stars and a blue ketchup "craze," the road-tripping story also included three photographs of "Stars who love their RVs." As you see below, there were MUCH SMALLER photos of Tom Hanks, David Duchovny and Shaquille O'Neal. 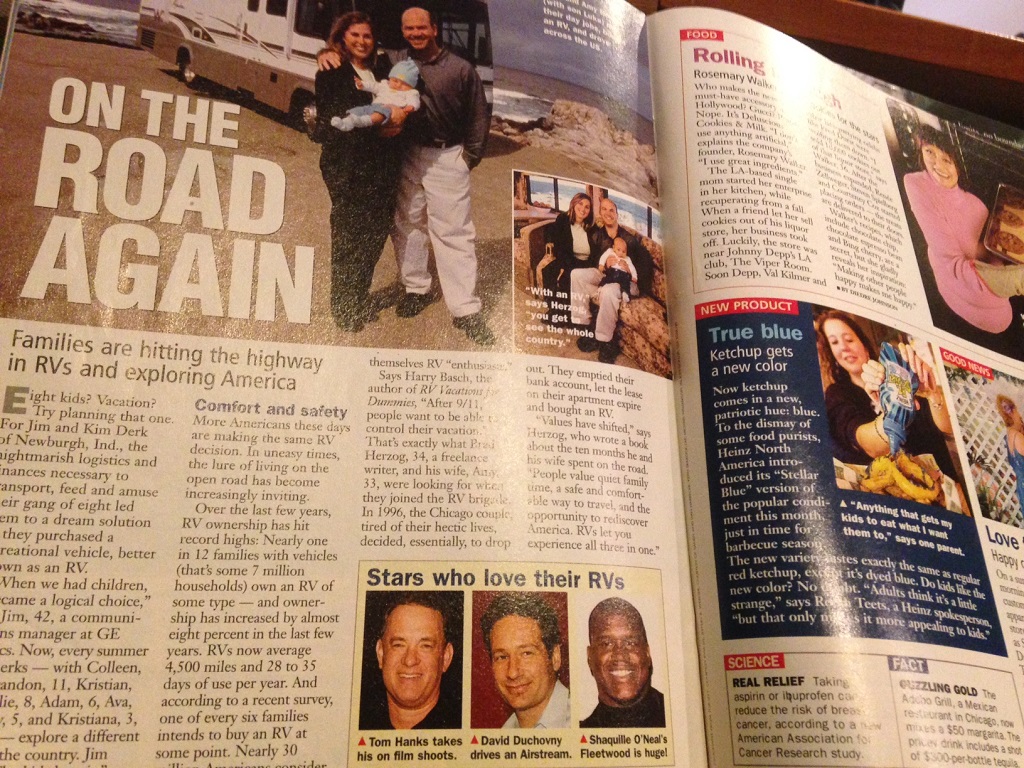 There are, of course, plenty of celebs who love their RVs. Jeff Daniels didn't just co-star in the movie "RV," he swears by it, saying, "I don't think you can call yourself a true American until you've been behind the wheel of an RV." Vin Diesel has a two-story, 1,100-square-foot motorhome. Brad Pitt and Angelina Jolie have one called the "Luv Sub." Rocker Lenny Kravitz reportedly once bought three RVs for use on his private island. The house-on-wheels has been embraced by sports figures like announcer John Madden, boxer George Foreman, golfer Davis Love III, skier Bode Miller, and racecar driver Jeff Gordon. By A-list actors like Robert DeNiro and Rob Lowe. By country stars like Dolly Parton and Alan Jackson.

And McConaughey. About a decade ago, he told Ellen Degeneres, "There's nothing not to like about it. The freedom of being able to pull up, stop, power up anywhere you want--beach or whatever. Set up and have your front yard different every single day. Whatever you want it to be, and to see the country that way -- it's awesome."

The Oscar-winner famously loves his tricked-out Airstream trailer, which he bought in 2004 and nicknamed "The Canoe." Can't you just imagine McConaughey saying--and he actually did say this, "I mean, the highways are like river ways, they're just concrete." He also said, "It's one of my favorite places. I've got a house, but even when I pull into my house, sometimes I sleep in that thing in my driveway. It's really comfortable."

Several years ago, he and his girlfriend and their infant son took a 42-day, 7,300-mile trip in The Canoe. While filming movies, he has stayed in his RV everywhere from Austin to Vancouver. Often, though, he keeps it Malibu, where he likes to surf. In fact, he usually parks it at the Malibu Beach RV Park. 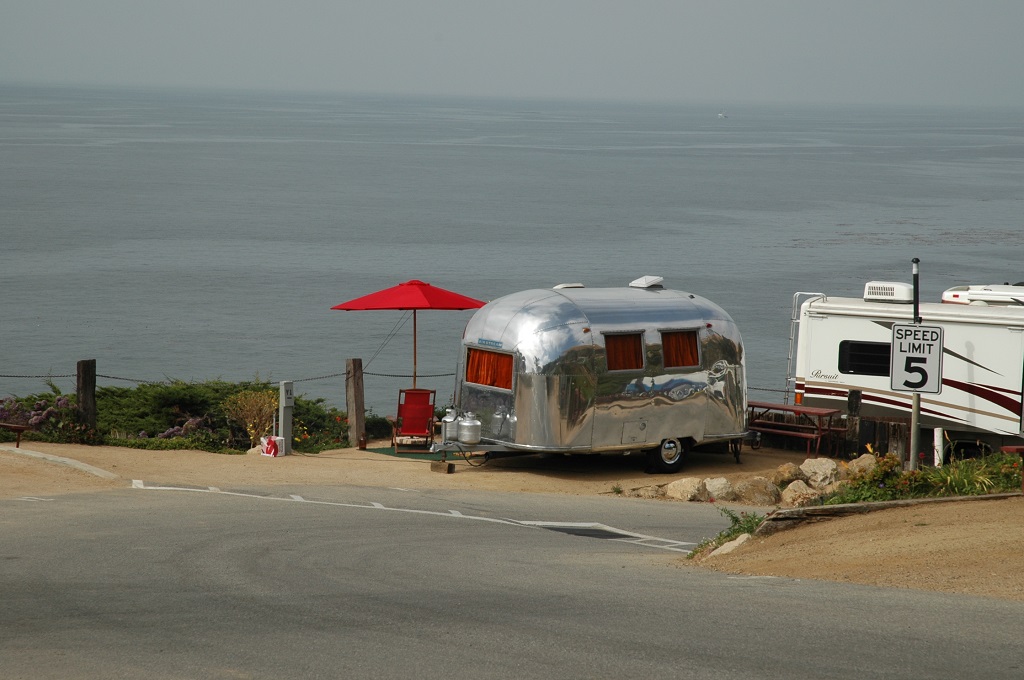 And as I write this, that's where Amy and I are spending the night. So we've decided to search for Matthew McConaughey, a mission that, admittedly, Amy is more eager about than I am.

Apparently, he isn't the only actor who has spent time at this campground on the bluffs. As the RV park's manager once told the Travel Channel, rather creepily, "You can be in the shower with a movie star right next to you."

But we just want to chat with McConaughey. That's all. Because, several years before he won his Oscar, McConaughey received another prize, this one slightly less talked about. It's called the RV Industry Association's Spirit of America Award. Here's the one grainy pic I could find of McConaughey actually holding it. He's even wearing a "Go RVing" shirt. 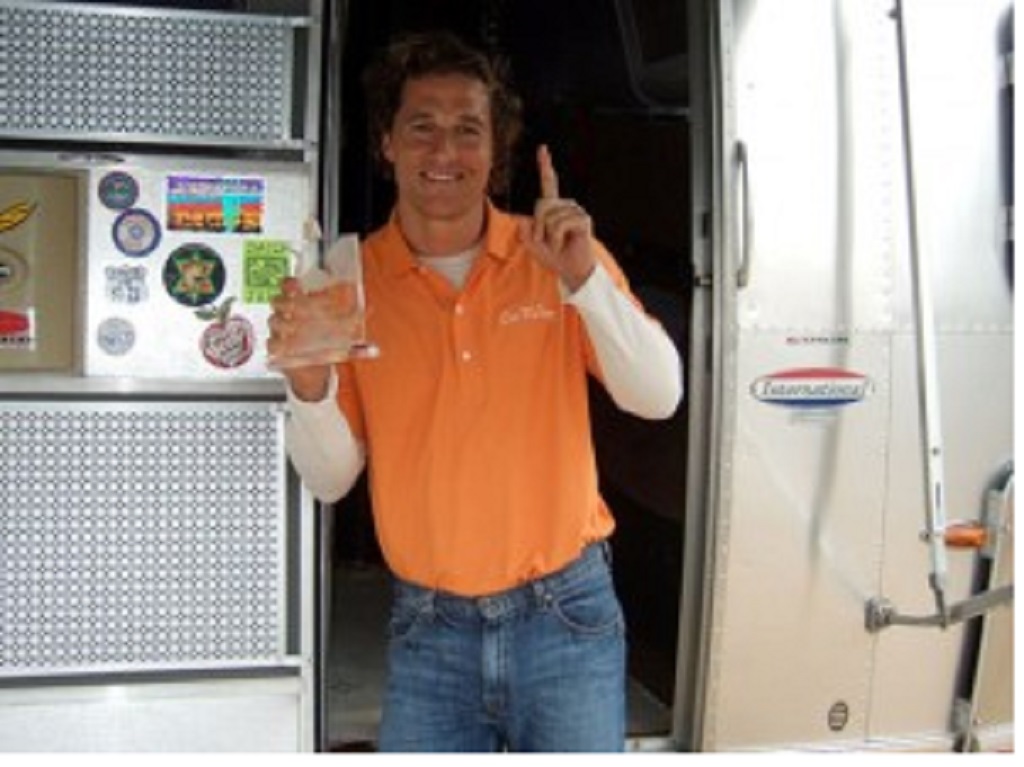 Yup, we were then only a few years into our roles as RV ambassadors, traveling around doing TV interviews and writing blogs and serving as a sort of poster family for the house-on-wheels experience. No, not this poster. 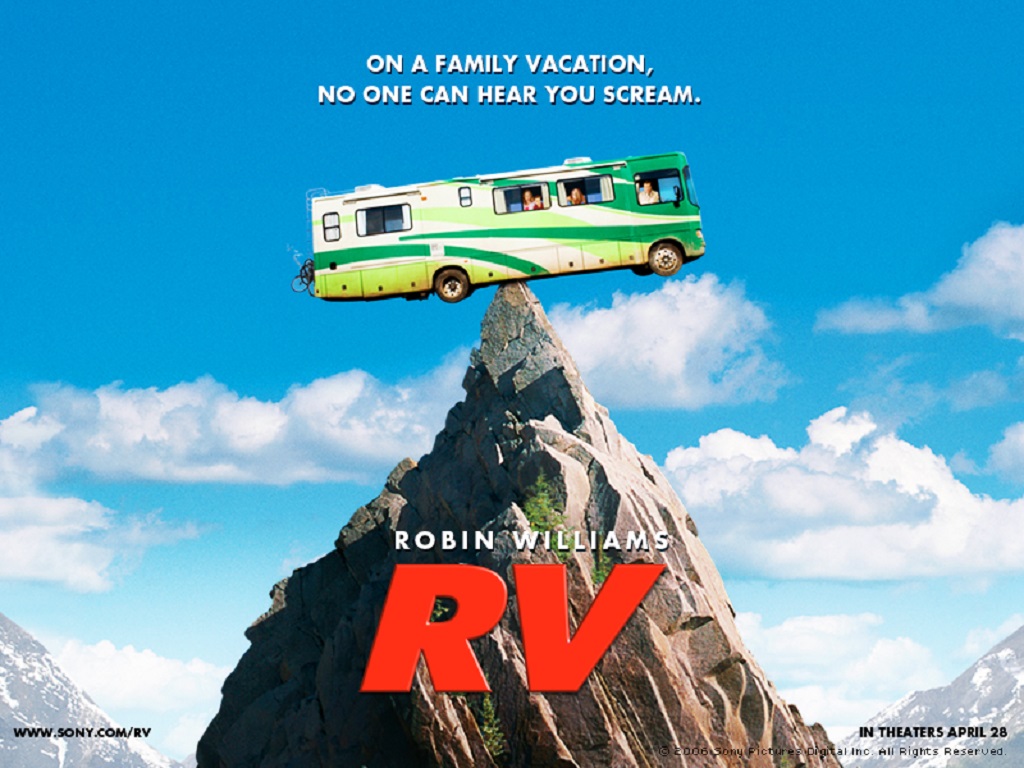 Now, I should point out that the list of the award's recipients is about as eclectic as it gets--everyone from Terry Bradshaw to Supreme Court Justice Clarence Thomas. Olympic gymnast Kerri Strug has won it. John Ratzenberger--yes, Cliff Clavin himself--has won it. And, of course, the Herzogs. In the scheme of things, we're the runt of the litter. Sort of like how "Harry and the Hendersons" once won an Oscar.

But we're keeping it.

Well, go figure, it turns out that our campsite was RIGHT BESIDE a tiny Airstream that looked a lot like the one ol' Matt has been bunking in over the years. 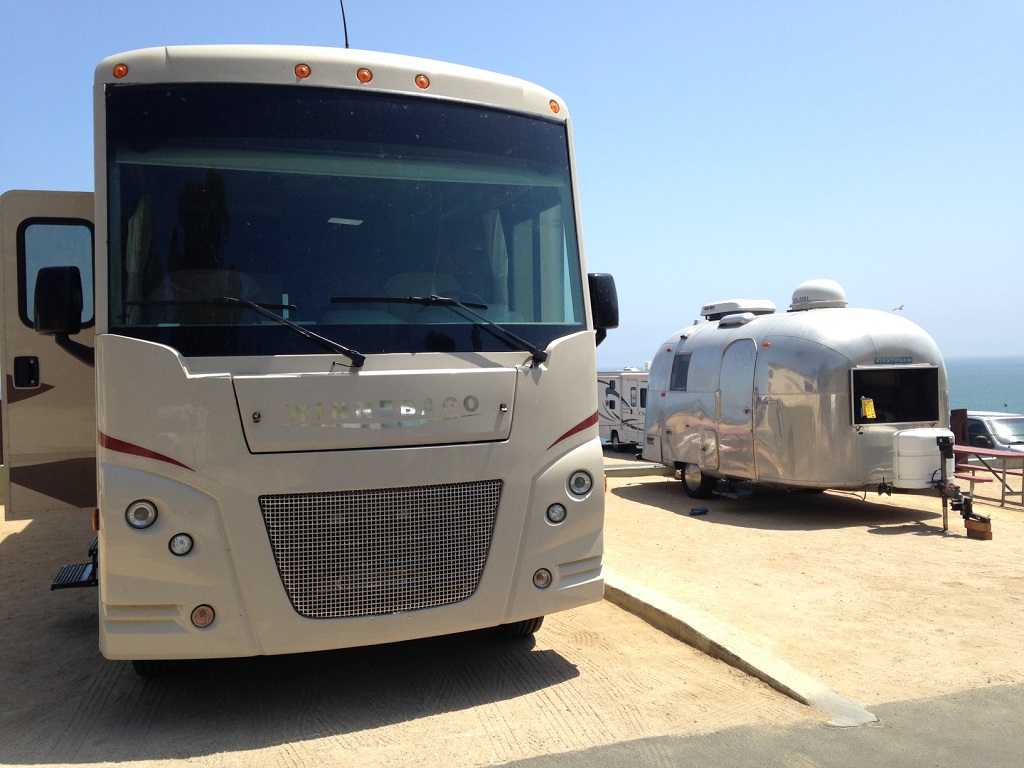 But it wasn't his. And he wasn't anywhere to be found. However, we did find the following:

A Minnie Winnie on the other side of us. 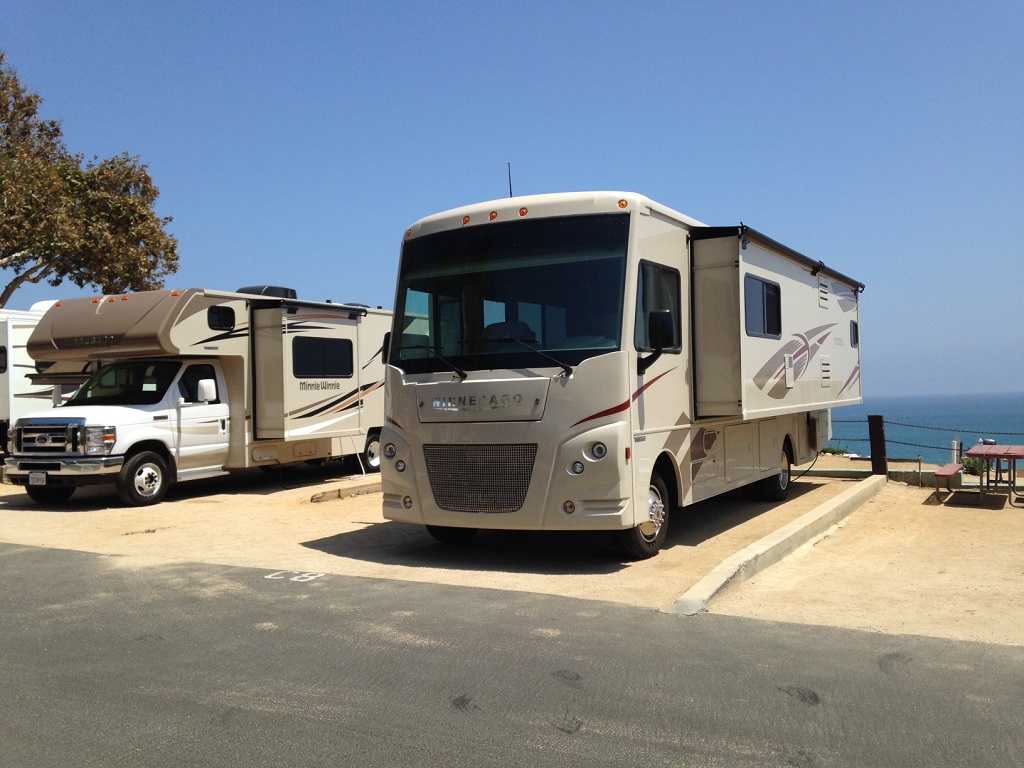 A couple more Winnebagos right behind us, where some life-is-good folks were settling in with a glass of wine above the waves. 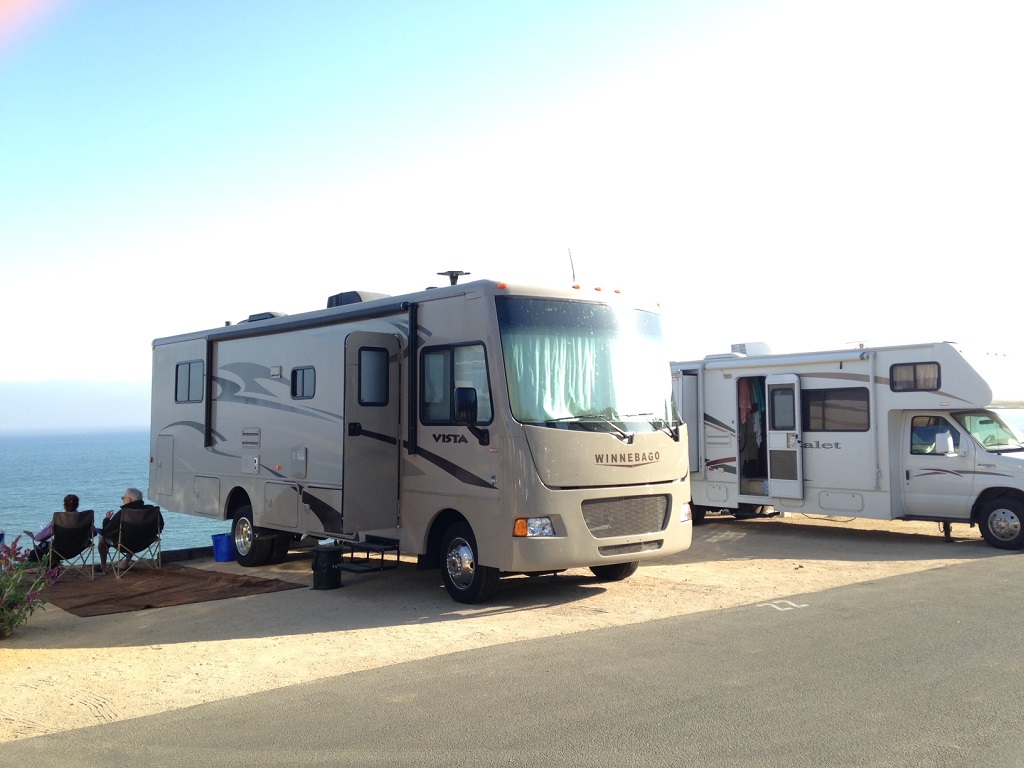 A sublime view of our own. 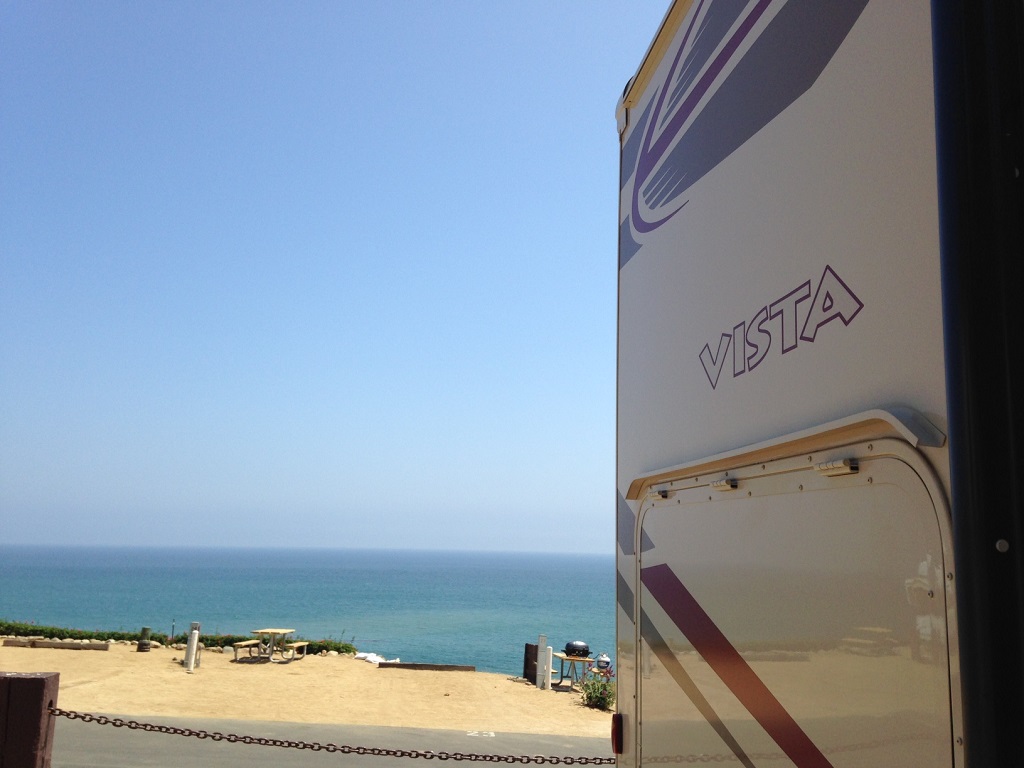 As the afternoon inched toward sunset, we strolled over to the spot that started it all. The Epiphany Place. The corner campsite with the multi-million-dollar view. 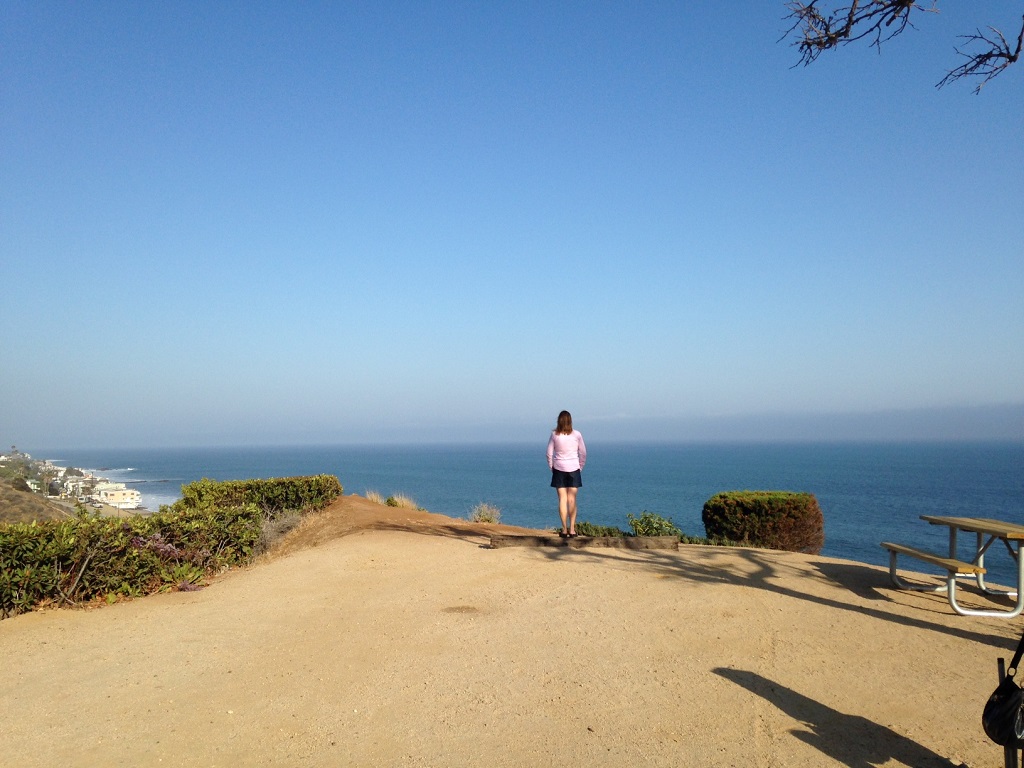 And that's when you realize that, sure, you can win an Oscar. And you can win the hearts of millions. And you can have a winning movie star smile. But when you can steer yourself toward paradise at any time, when you can travel at your own pace and on own your own terms, when you can call up memories of Malibu and revel in the fact that its not the end of the road but rather the beginning of the journey well, that's truly winning.