Destinations are delightful, but travel designed as discovery is a truly liberating notion. You can go any direction you choose, as far you as you wish. You draw the map.

The dark insistent rhythmic chords of the music faded up as the TV camera locked tight onto Brad Herzog's face. At the height of its popularity, "Who Wants to Be a Millionaire" was being watched by nearly 30 million people. The affable Regis Philbin, sensing the tension of the moment on the cusp of a $125,000 dollar multiple choice decision, leaned forward, ever so slightly, and forcefully asked, "Is that your final decision?"

As a professional writer, Brad Herzog would look back on that moment and tell you that what transpired on TV screens across America was a story, but it wasn't the REAL story. To Herzog, that moment could be seen as simply the trailhead marker on the path to the truer, and richer story.

With a degree in psychology from Cornell and a writer's insistent sense of curiosity, Herzog's career path was laid out across a keyboard that started with sportswriting for the Ithaca Journal in upstate New York. It was a paycheck and a training ground for learning discipline and deadlines. But, it was also a leash stretched tight against Herzog's desire to explore the world and the people and ideas who inhabit it.

Only now, can one see that a youthful bet on a novel idea would create ripples of a current that still propels this writer's life. That bet came on wheels. Winnebago wheels to be exact. It was an idea that Herzog pitched to his wife Amy to buy a motorhome and criss-cross America with a unique proposition in mind. Was it possible to find love in Love, Virginia? Pride in Pride, Alabama? Or wisdom in Wisdom, Montana? In his book, "States of Mind," Herzog found some fascinating answers.

That first cross-country survey, Herzog describes as "watching the movie of America through the windshield," took nearly a year. And getting across the finish line required a little extra financial grease from both of the young explorer's families to complete the mission. In the process Herzog laughs, "it turned into a 48 state home search." And beyond their adventures and book research, a home on the Monterey peninsula of California seemed to be the best place for these midwestern adventurers to root their family.

A wide smile comes easily to this now bald Gen-Xer who succinctly defines the experience, "I'm a better husband, better dad, and better writer because of our RV adventures." He's also a "lister." From some of his books ("The Sports 100") to his frequent blog posts for the Recreational Vehicle Industry Association (RVIA), Herzog often thinks and writes about themed collections. It may be ferris wheels, or destinations inspired by great sports moments like "The Drive," "The Catch," or "The Hail Mary." It's Herzog's unique gift of applying a sense of structure to seemingly unrelated stories that brings a magic ingredient to his relaxed, conversational and thoughtful prose.

Writing is a solitary process, but it's driven by the fuel of experience as Herzog learned early in his career. Through his talent and unique way of looking at the world, he's in a pretty small percentage of writers who actually carve out a living pounding the alpha chisels of a keyboard. And true to his self-chosen vocation, the demands of house payments, orthodontia, summer camp and college savings are paid for through a growing collection of children's books, travel memoirs, magazine articles and web blogs.

June finds the Herzogs in working vacation mode. This year it's adult swim as the boys are at summer camp in Wisconsin (as third generation campers) and the couple is once again on the road trying out a new Itasca Tribute. As a blogger for RVIA there are media tour stops that include various TV interviews everywhere from Pittsburgh to Hartford amid a 15-state tour, as well as a white knuckle drive with the rig into downtown Manhattan for an interview with the Fox Business Channel. There are also book signings at stores along the way and the expectation of unplanned discoveries that will be turned into entertaining blog posts -- or perhaps the germ of an idea for another book. 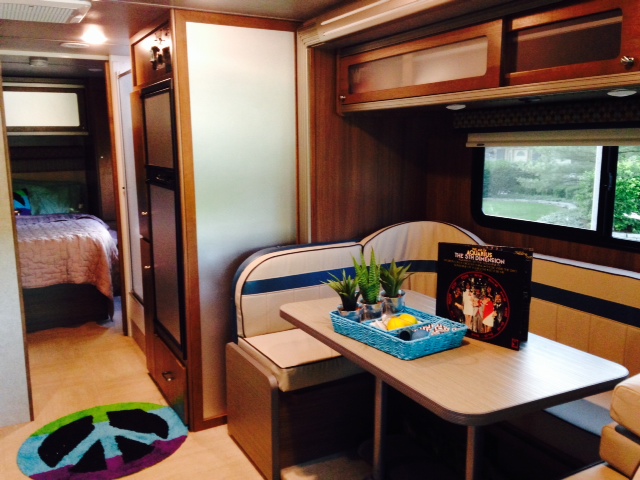 As one of the very first of the new Winnebago vintage-designed models that draws sharp styling cues from the Winnies of the 60's, their Itasca Tribute is being noticed. Three hours from their overnight stay in an RV park in Toledo they stopped for gas when "a guy pulled up, got out of his car and said that he'd seen the coach the night before and really liked it." Herzog and Amy have honored the spirit of the design by adding a peace symbol rug and a few other accouterments of the 60's and 70's. "I really love the idea of the Tribute," he says. "It's kind of a throwback notion. God forbid you're spending time with your family!," he laughs. "There's always been a nostalgic feeling about the RV experience. And this is the way vacations should be, with technology around." 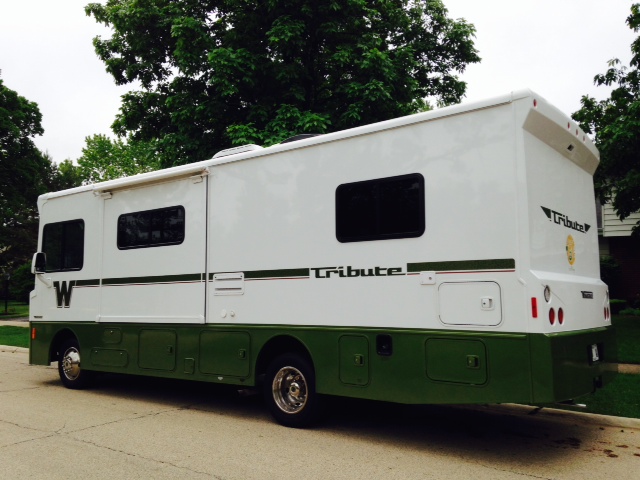 "I think advances in technology have played a large role in transforming the RV experience. You can be as plugged in as you want to be. But, as the Tribute represents, you can also embrace the nostalgic aspect of the road trip," muses Herzog. And because of that, he senses that the RV appeal is reaching deeper into the marketplace of younger owners. For him, motorhome travel offers a comfortable mobile studio and a much larger window to the world. 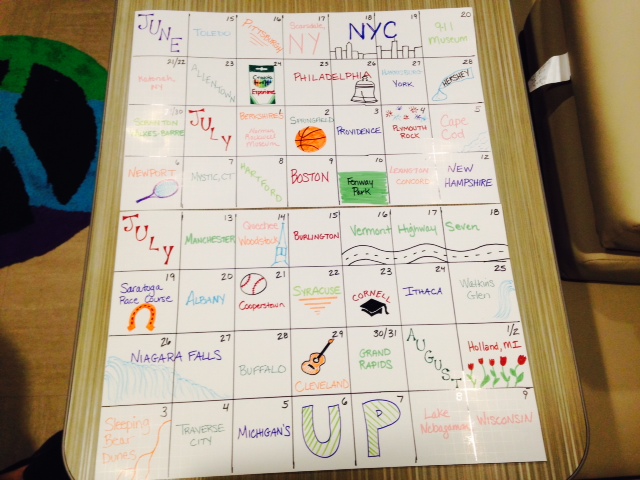 It was his big bet on setting out on a windshield exploration of his list of uniquely named towns that put him on the road, and on his way to getting "States of Mind" published fifteen years ago.

A year later, Herzog sat across from Regis Philbin, his brow furled while a tense smile flashed for a moment as he contemplated his answer. He'd already won $64,000 dollars and was now one question away from doubling his money. The question: which of these four listed American westerns was not inspired by a Japanese movie? In that delicate moment where greed is balanced against surety, Herzog chose the certainty of sticking with his $64,000 dollar winnings.

Knowing that staying pat was Herzog's final answer, Philbin asked a simple game show question that hosts frequently use to add a sense of dimension to their contestants, "Now, you've also written a couple of books along the way. . ." It seemed innocuous, almost a gratuitous throwaway line.

Herzog described his book of the 18 towns that he and Amy had visited for "States of Mind." As the camera cut away to a smiling Amy in the audience, Herzog briefly told the tale of liquidating almost all their assets, buying a 34 foot Winnebago and setting off on a 314 day journey.

That day, before the show's taping, Herzog had logged onto Amazon, as he often did, to see where "States of Mind" was sitting in the sales rankings. It was hanging in at 122,000th place.

One week later, after his appearance on "Millionaire" Herzog was sitting across from Matt Lauer in the Today Show's studio talking about "States of Mind," which had now hit #7 on the Amazon bestseller rankings. Lauer gleefully admitted that the show's producers had turned down an opportunity for an interview with Herzog a year earlier. Those two minutes of post-game chit-chat with Regis had given Herzog a media boost that far outstripped Andy Warhol's estimate of fifteen minutes of fame. Such is the power of a good story meeting thirty million eyes and ears.

The game show winnings, and boost in book royalties, certainly were an unexpected windfall for the Herzog household, but far from a powerball win. Yet, without a doubt, the white hot glow of fortune's spotlight has added some luster to Brad Herzog's career.

Herzog casually tosses off a remark that, "A writer whose world is very small can only express small thoughts." Whether it was through calculated thinking or youthful passion, Brad and Amy Herzog went in search of many different Americas at a time when most of their friends were settling into family and careers. Their experiences redefined Herzog's view of life, family and writing. He's proud that readers have stopped to tell him how he's inspired them to get out and travel. It was a big bet, and it's still paying dividends.

You can learn (and watch) a lot more about Brad at: www.bradherzog.com

Buy "States of Mind" at Amazon by clicking here