Hello from the FitRV headquarters, otherwise known as "home."

James and I just got back to HQ from a trip to Phoenix, where we attended a Good Sam event...one of those half-rally and half-show things. There really should be a term for them as common as they've become. Showly? Ralshow? I got so sick of typing "rally and show" on every social media post I shared during the event, that I'm determined to start a new name movement. Feel free to join my cause... The Phoenix Showly was fantastic. James and I both led seminars on various topics ranging from healthy RVing (my sessions) to RV education seminars (James' sessions). Here's some news worth celebrating. My healthy RVing sessions? They're NEVER well attended, at any show. So at Phoenix I expected the same low turn-out. But guess what?!? I packed the house in pretty much all my healthy seminars! I couldn't believe it. I was so thrilled to see an interest in healthy RV living...it's what I've always worked for! It was a super proud fit-mama-bear moment, and completely reaffirmed this "FitRV" thing we do. But leading seminars wasn't ALL we did at the show. We also met up with some of the "family". And by that I mean our Travato family. We camped with a group of other Travato owners...all parked together in a big rectangle on the blacktop jungle that also doubles as the Phoenix International Raceway, with our Travato doors opening to the center courtyard we created. We called it "Travato Town." And also "Van Village," we never could seem to get consistent; but since they both sound pretty cool, I'm good with either. Over the course of the show, there were about 15 Travatos who swung by Travato Town, and even one non-Travato, which was quickly re-branded: As for Travato Town festivities, they were plentiful starting right away on Day 1. Mother Nature put on a phenomenal sunset show: It felt like she was saying, "Welcome to PIR! It's going to be a great week. Party on!" Well, maybe not that "party on" bit, but such a beautiful first night sure did set a wonderful tone for the rest of the show. James' birthday happened to fall during the rallshow too, so guess how we celebrated it? With food, of course. RV Gangnam (potluck) Style: 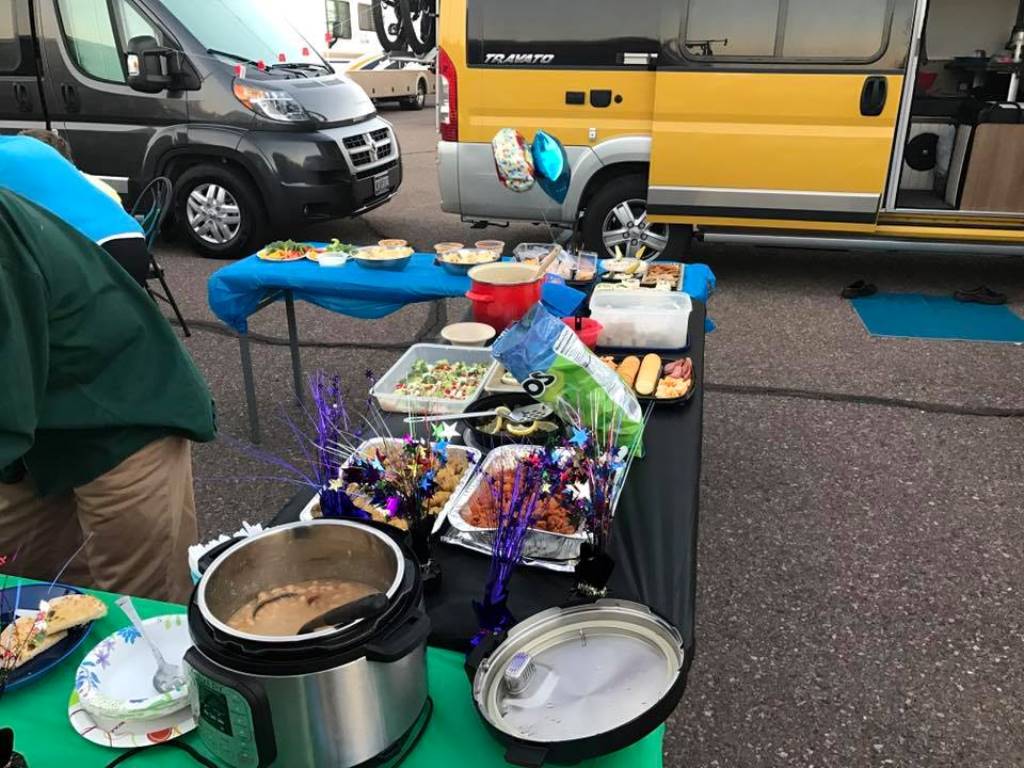 Barring one sneaky bag of tortilla chips, it was one of the healthiest RV potlucks ever, I'm proud to say. I think attendees were a little intimidated with us being there, so they brought out their healthiest potluck dishes. That's what I call "Productive Peer Pressure." Hang out with any fitness pros and you'll know exactly what I mean.

We also had a bouquet of balloons from the party festivities. Since we couldn't have campfires, the balloon bouquet set in the middle of our nightly chair circle was a pretty close substitute. Well not really. It was kind of silly, actually. But when you've been sitting in a parking lot for days, things like balloon campfires become weirdly amusing.

Though it wasn't all sitting around, no sirree! Remember that Productive Peer Pressure I mentioned? I tapped into it many times during the week. Like when I got everybody up and Boot Camping. We had to put one of the newbies' outdoor sound system to the test. We put some upbeat music on nice and loud, attached a bunch of TRX straps and resistance bands to the Travato door hinges, and we had an awesome Boot Camping workout right there in Travato Town. Who says exercise isn't fun?!

And what would a FitRV meetup be without a bike ride? Bike rides are my favorite part of any get-together: We were so lucky to have a local Travato owning couple join us on this meet-up, they brought tables and supplies and were incredibly gracious hosts. Rex Anderson and his wife Valerie even went so far as scouting out biking routes in advance, and it made the riding so much easier. There were 3 rides people could choose from: 5 miles, 15 miles, and 25 miles. My group did the 15 miles. There MAY or MAY NOT have been a Starbucks stop involved at the halfway point of my group's ride, but what happens in the 15-miler group stays in the 15-miler group. And just like that, it was over, and we pointed Lance north towards FitRV HQ. I had a long drive home to Salt Lake City after the rallow (I think this one's my fave!), which left me with a lot of reflection time. I spent some of that time thinking about the uniqueness of the social dynamics within the RV community. It's actually pretty incredible, if you think about it, how otherwise complete strangers can become so quickly bonded over one commonality...RVing. Even in a setting as lame as a huge unending parking lot, when you plop a bunch of RVers in it together, something close to magical transpires. 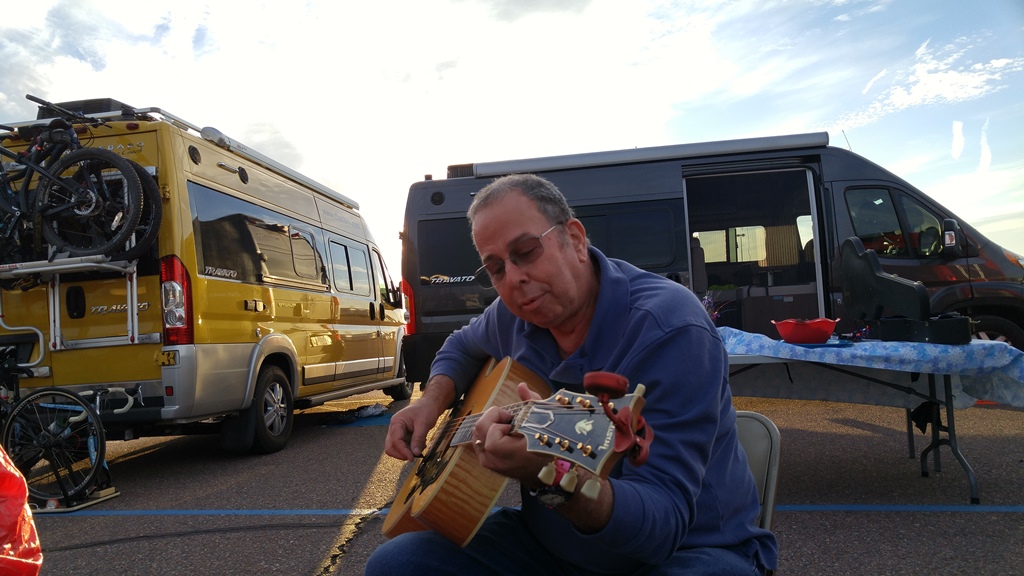 You'll see that at Winnebago's own Grand National Rally (GNR), too. Let's face it. We don't go to Forest City, IA to immerse ourselves in nature. We go to immerse ourselves in the social experience and to hang with fellow RV nerds who get it...our indefinable love of the RVing culture. And as you roll out of GNR you aren't thinking about the adventures you had or the mountains you just climbed, you're thinking about the unique souls you met along the way...those who are gentle, others who are brilliant, some who are creative, and my favorites...the silly souls (and their bottle mustaches). Sure, RV rallies and meet-ups are nothing new. But meet-ups based on a shared RV model, like the one we just had, seem to be a growing trend. We can probably attribute it to the explosion of social media groups geared around specific rigs. At least that's been the case with our Travato group. I find these rig-specific meet-ups fascinating. It's like adding another layer on to the RVers bond. RVers in general bond easily because of our shared RV lifestyles, but when it's an owner of the exact same rig as yours, the bond grows even tighter. On a whim, I started a Facebook group for Travato Owners (and WannaBes) two summers ago. James and I had just gotten our RV "Lance" home, and wanted to connect with other owners. I envisioned it being sort of like a cyber-campfire, where we all sit around and chat about trivial things as we would at the RV park. We're almost at 1700 members now, and the group has exploded into so much more than a campfire chat! Each day there are friendships being formed, creative inspiration getting shared, and strong support given from the seasoned owners to the nervous newbies. The Facebook group has taken on a life of its own and well surpassed my original vision. We aren't unique, our Travato family. There are other owners' groups even bigger and older than ours, like the View/Navion group on Yahoo. With a little research, you can quickly find out if your RV already has an owner's group. And if you don't see a group for your rig, well then maybe this time YOU can be the one who, on a whim, starts a new family. And who knows. Maybe we'll be seeing you in your rig's RV Town at our next showlly...

Learn More about the Winnebago Travato