The annual Caravan Salon show in Dusseldorf is at once exciting, impressive, and a little overwhelming. In no particular order, here's a collection and photos that I gathered during my visit.

Dusseldorf is a very pleasant city on the Rhine. Below is a warm Sunday morning. 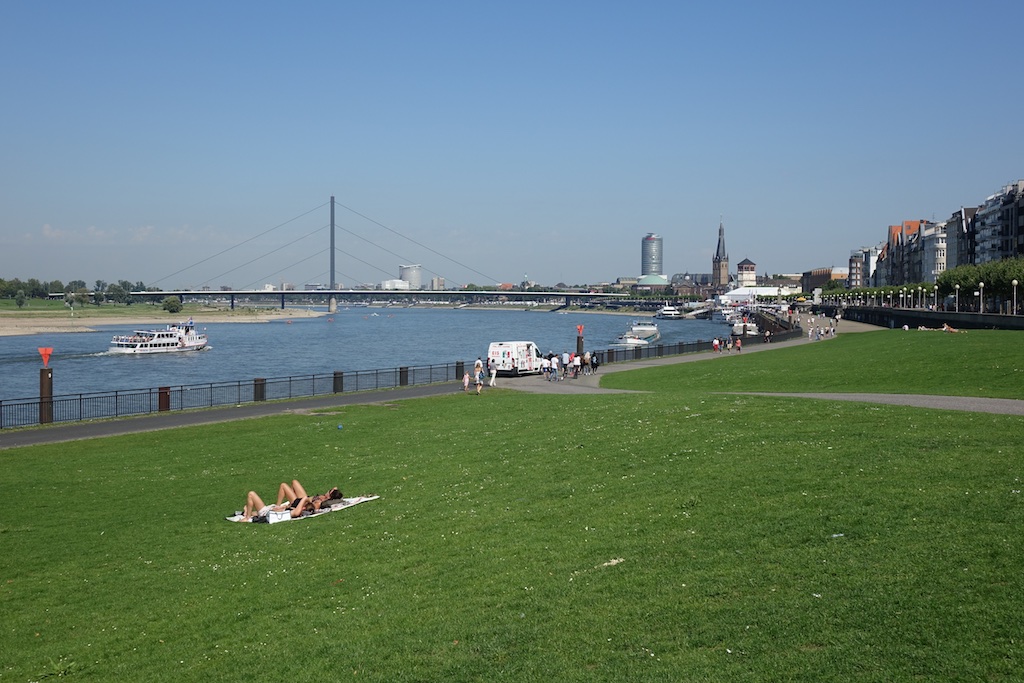 Typical of many German cities, much of Dusseldorf was destroyed during the war and much of the post-war architecture of the 50's and 60's is very drab. However, modern architecture is finding greater favor these days and adds a degree of whimsy and astonishment. 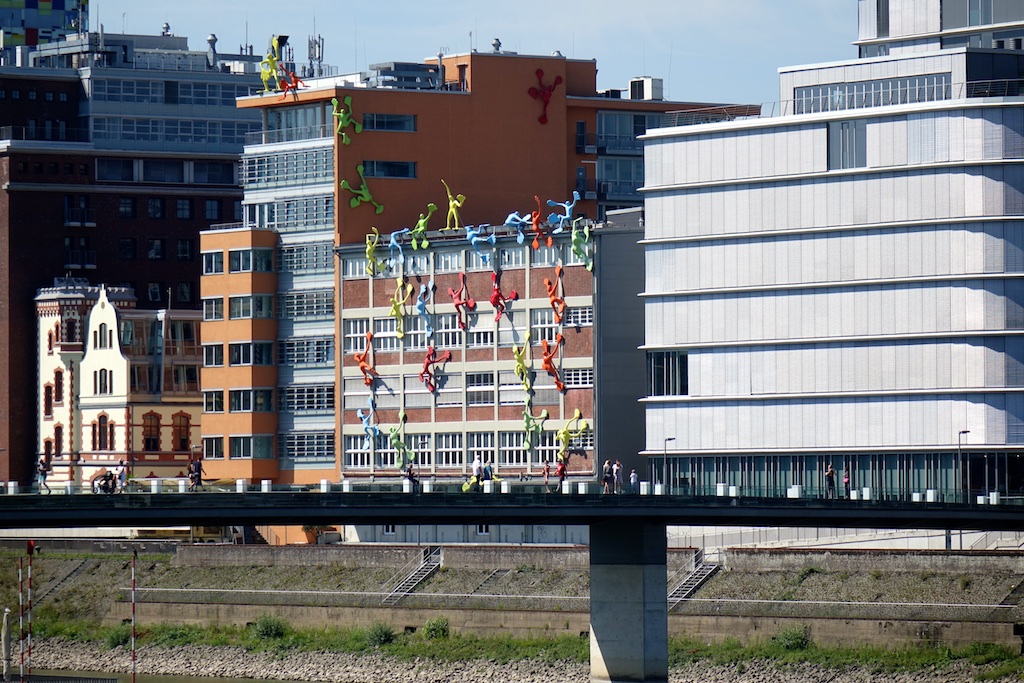 These apartments were designed by American architect Frank Gehry. 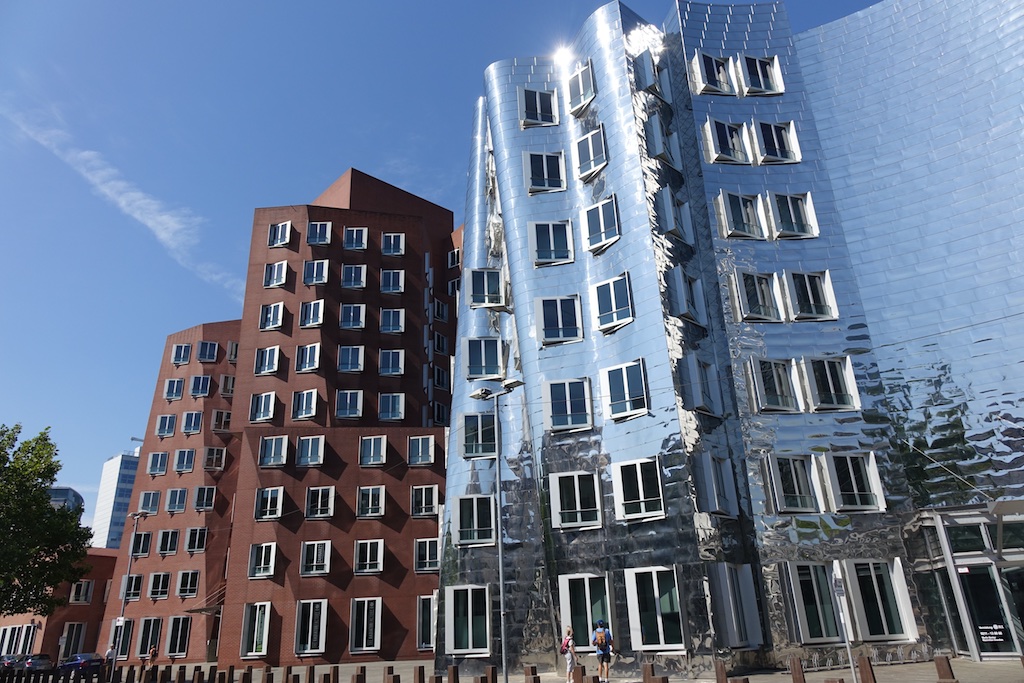 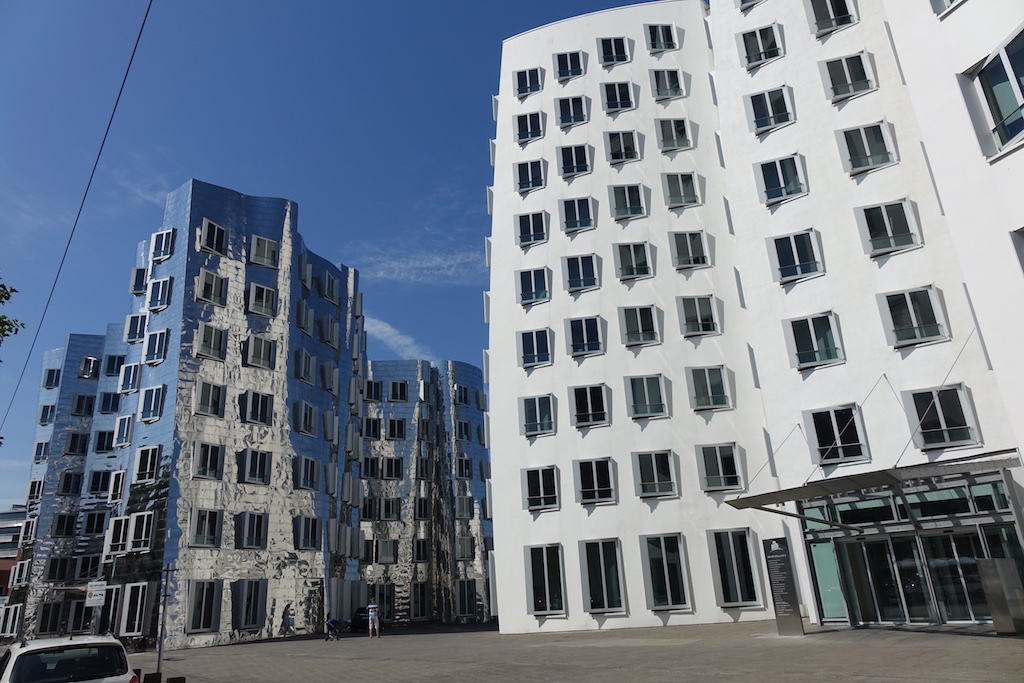 It's about a 20 minute light rail train ride from downtown to the Messe fairground complex. This is the station at the complex. 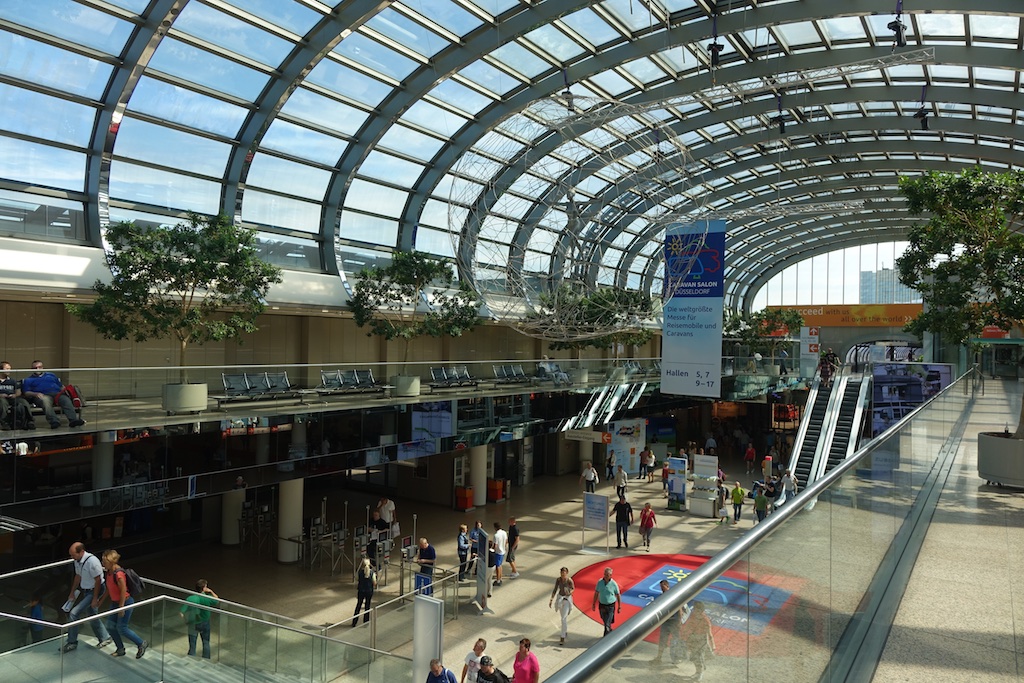 And now, onto the show floor. Rear beds are pretty high. And the reason for this is basement storage (see next). 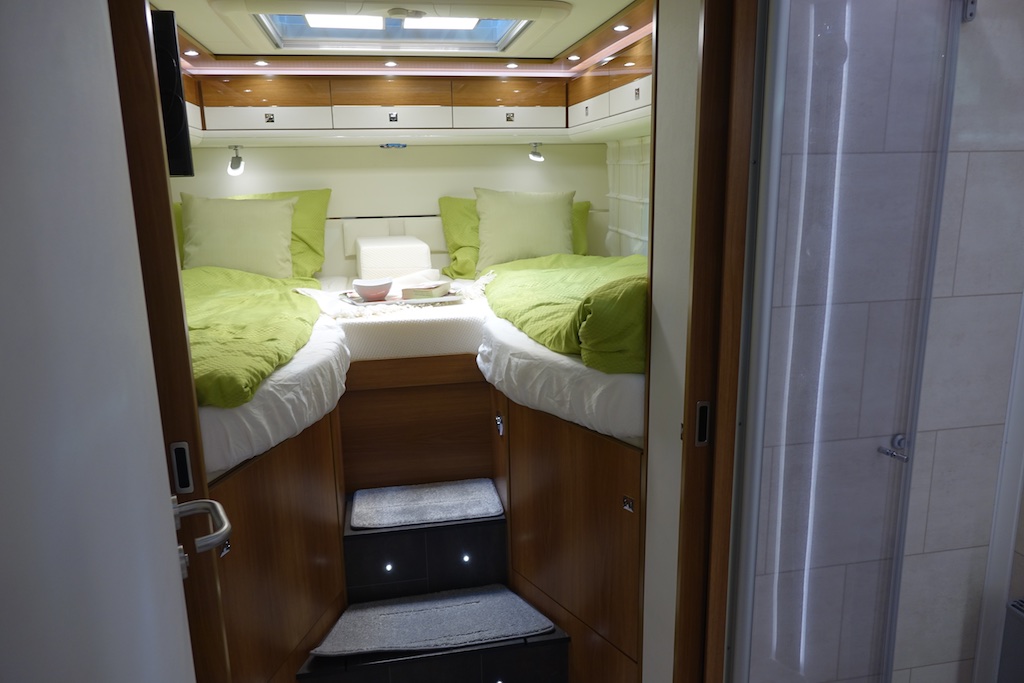 Bike and scooter storage is a big plus as most rigs don't tow cars, but many owners still want mobility when camped. 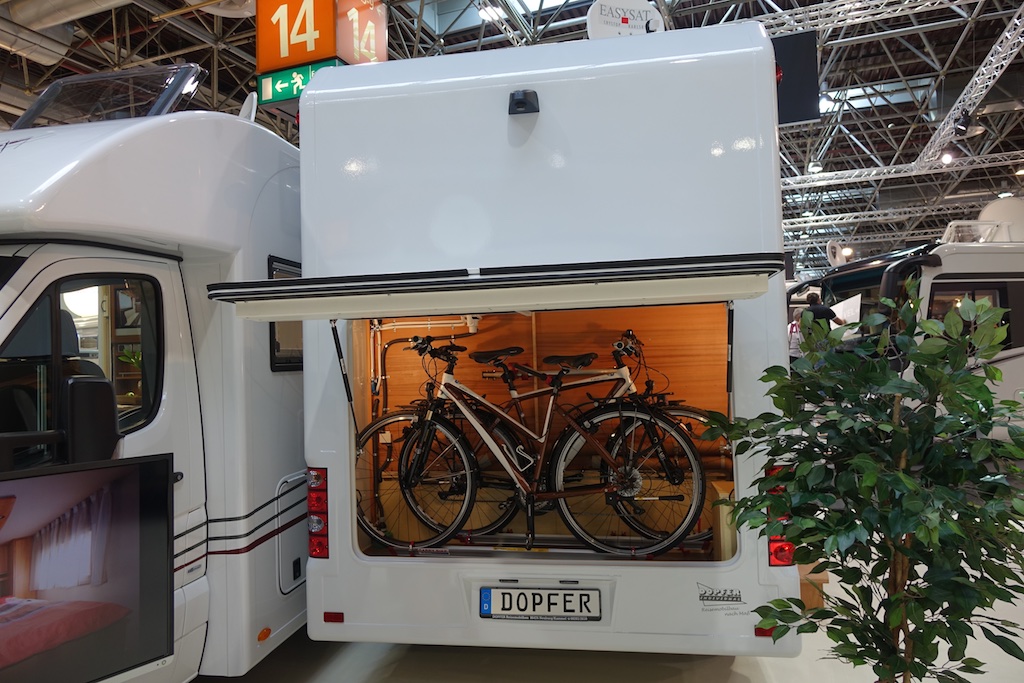 Thin is in! These vertical designed refrigerators were very popular in the new models. This display will give you a good sense of the capacity and it certainly attracted the attention of three of the Winnebago team. 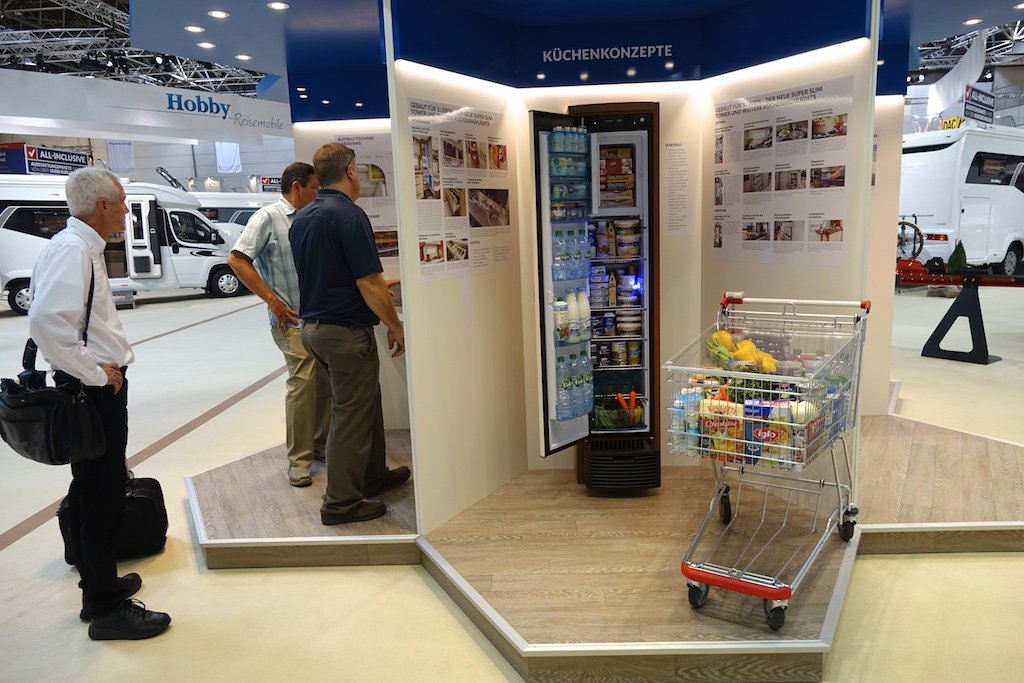 Slideouts are rare. They're usually found only on the Class A coaches and even then are sparingly used. This Adria rear slideout was very novel and high enough to preserve underneath storage. 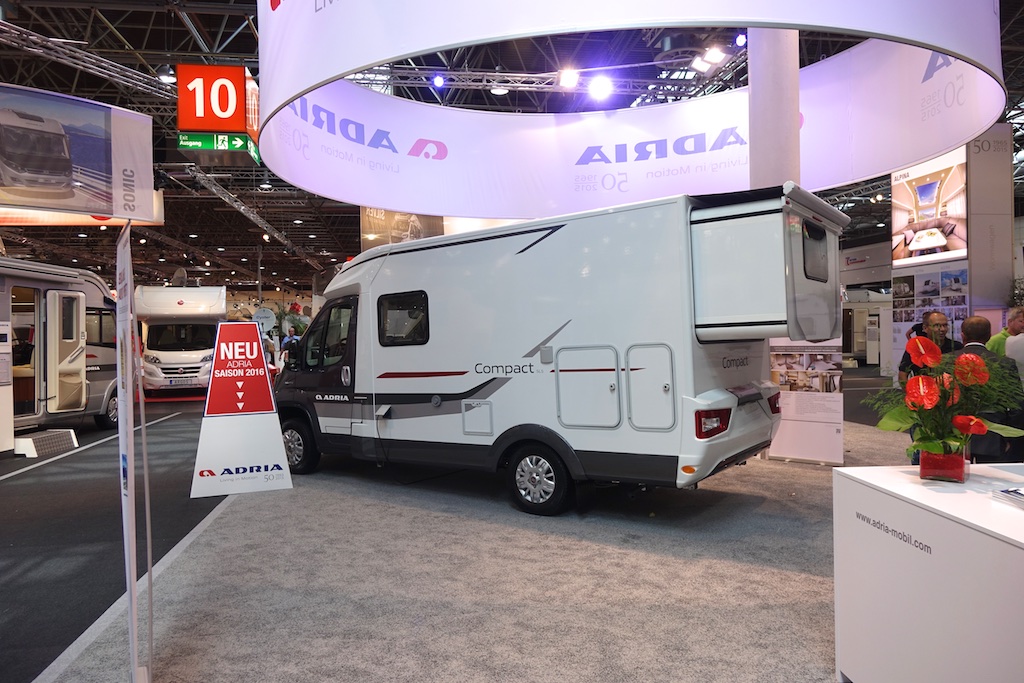 Full tilt up rear hatches are popular. These also serve as an awning. Note the internal sliding screen pulled half-way across the hatch. 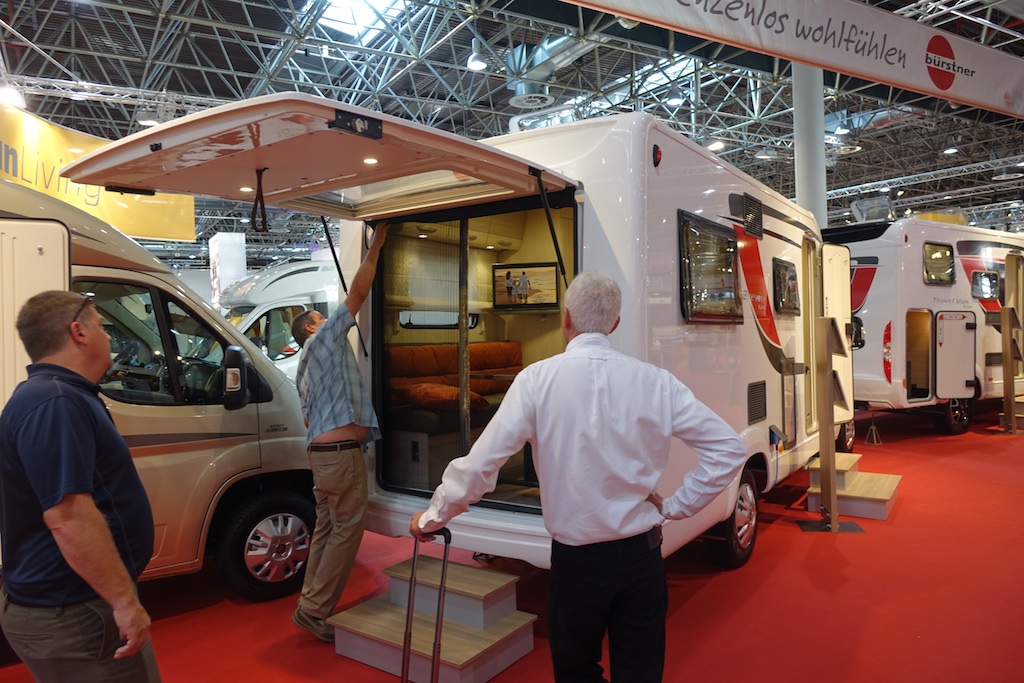 Europe's RV unit sales may be bigger the the US, but we've got a more highly developed selection of campgrounds. Many European campgrounds offer 15 to 20 amp service, and often a central dump station and limited water hookups.

We stopped at one international RV camping firm who booked trips throughout the world: including Iran. The representative from that company said that many clients enjoy RV travel there, but also laughed and added, "You might want to put some German flags on your vehicle if you go." 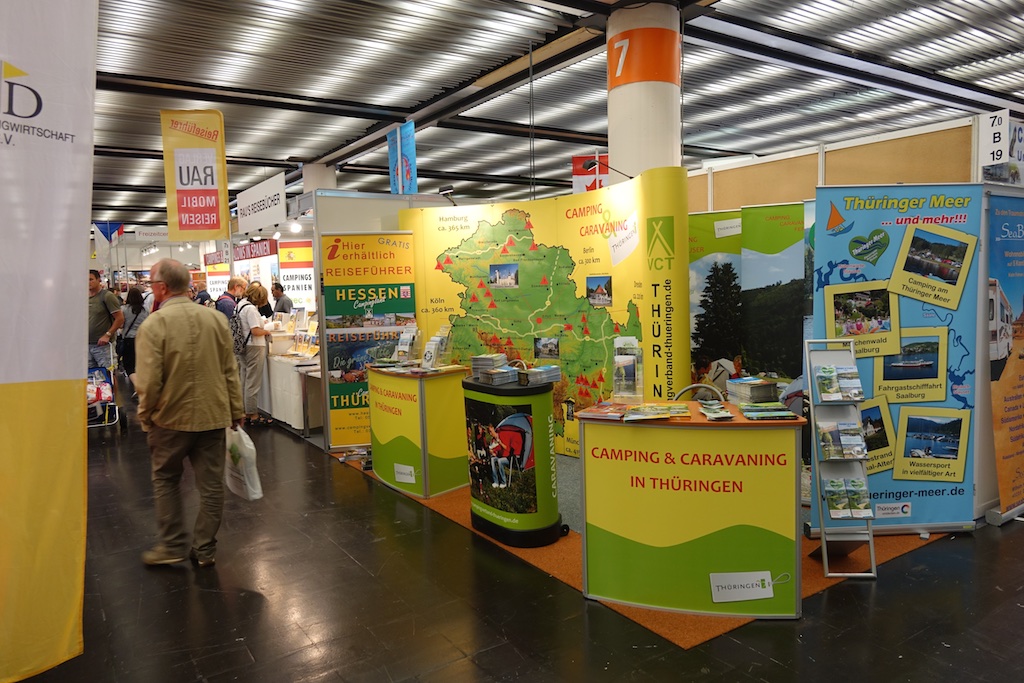 The language is different, but the interest in accessories is the same. Generally, it seemed like many of the people attending were a little younger than their North American counterparts. 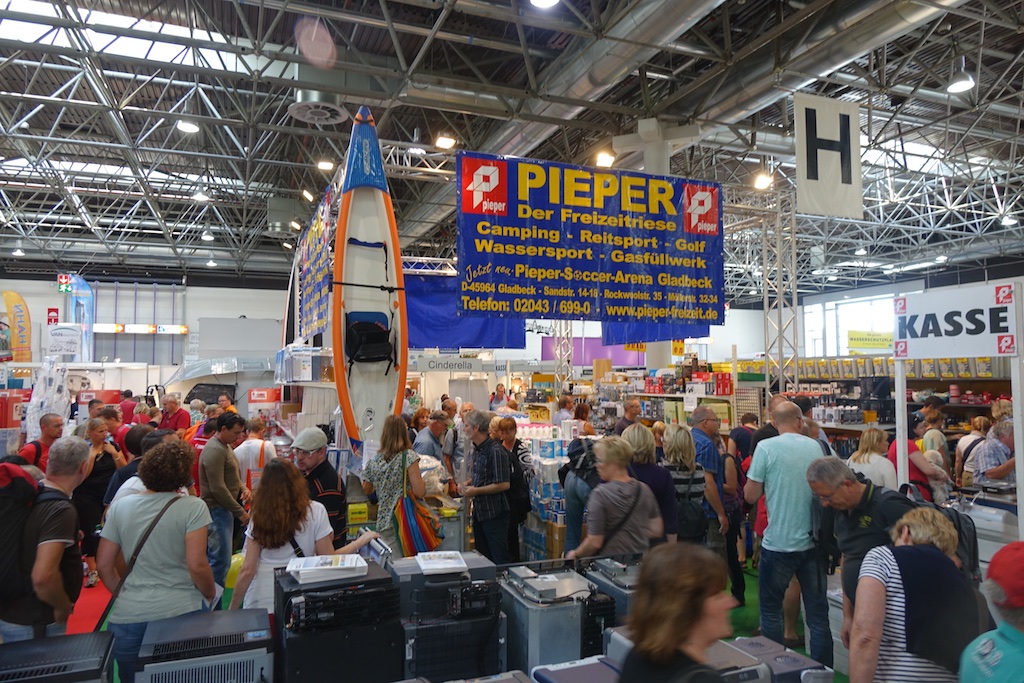 It looks like a mattress store, and it really is. Froli does a lot of interesting things with plastic molding and foam. Winnebago is using their clever spring system in the Travato. 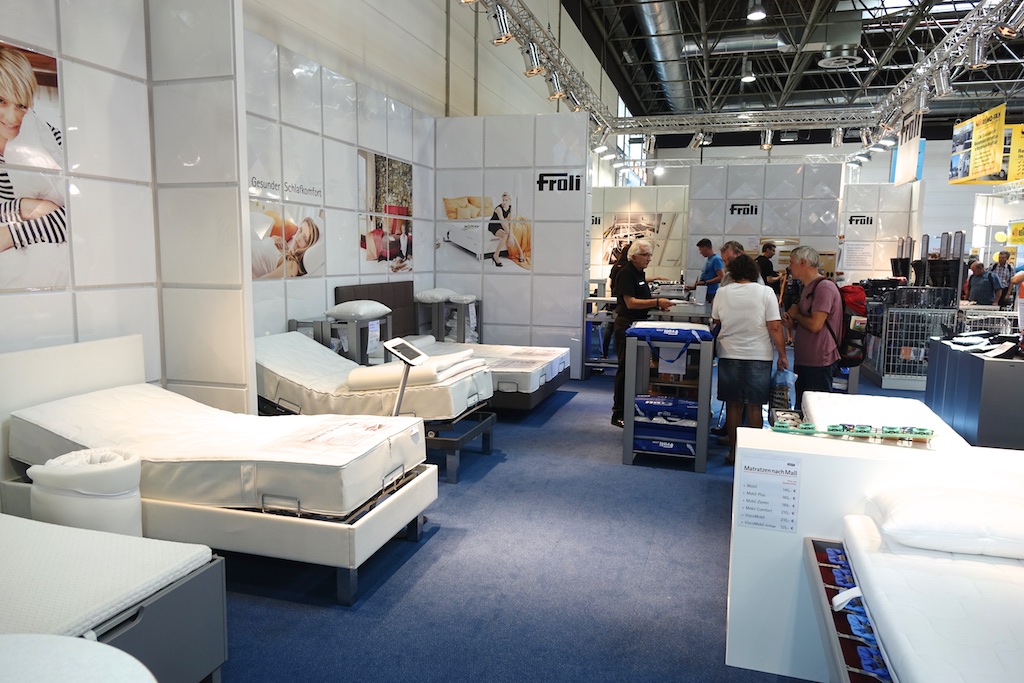 Perhaps the most American look at the show. It's a camper-type unit on a VW truck. 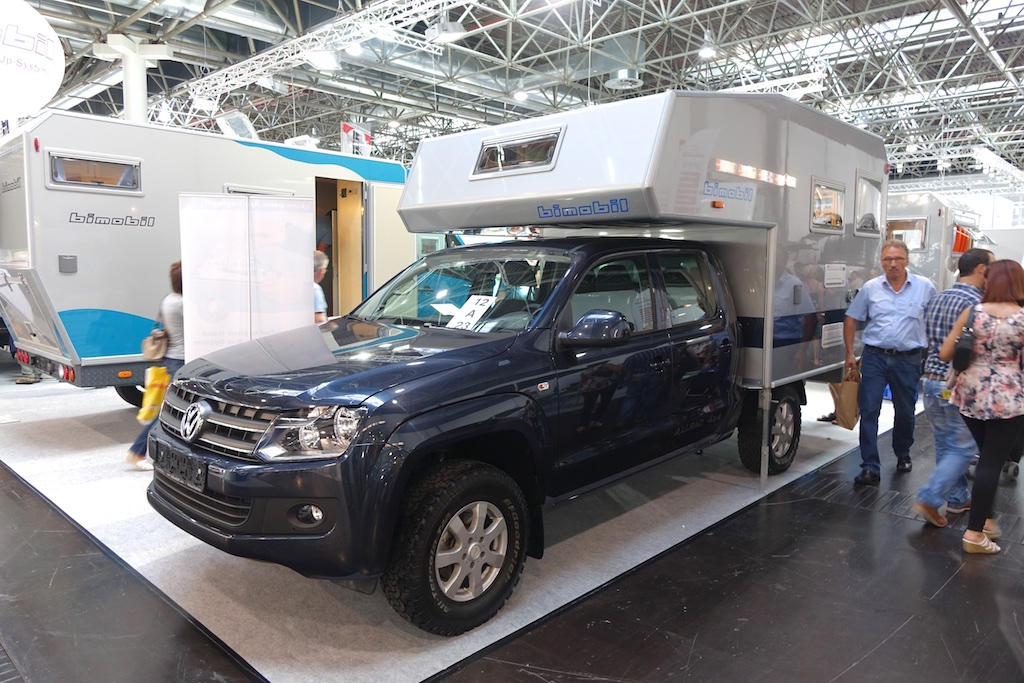 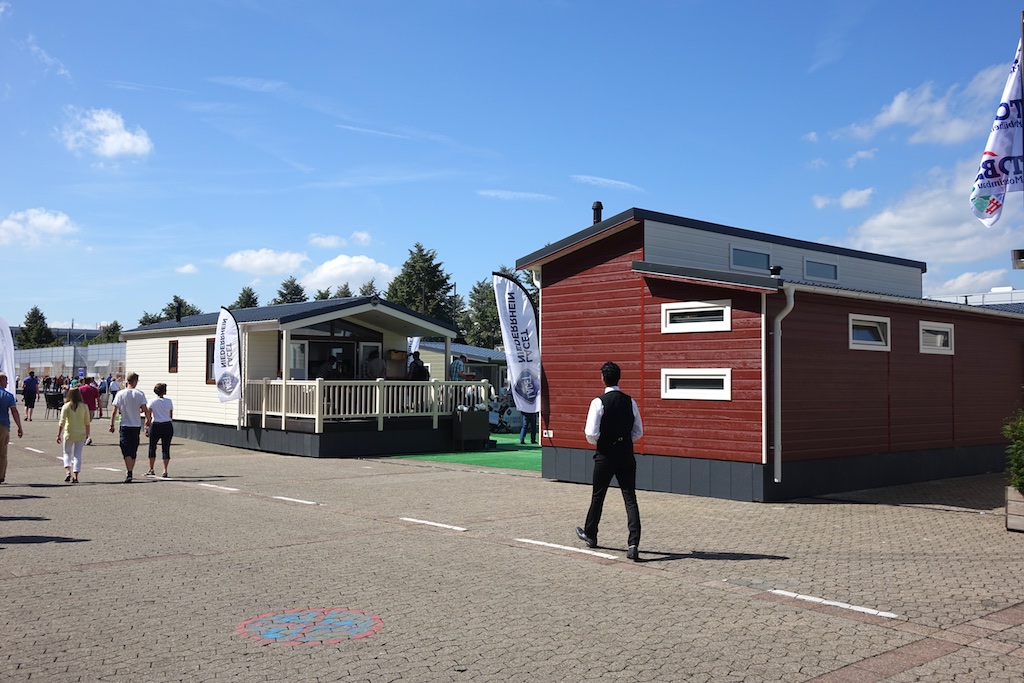 Now that's a display! Take a close look and you'll see that beyond the arched platform over the VW camper (complete with chrome edging) they also built a temporary grid of panels and spotlights. These trade show techniques are used in many other types of American industry shows, but not by the RV industry. 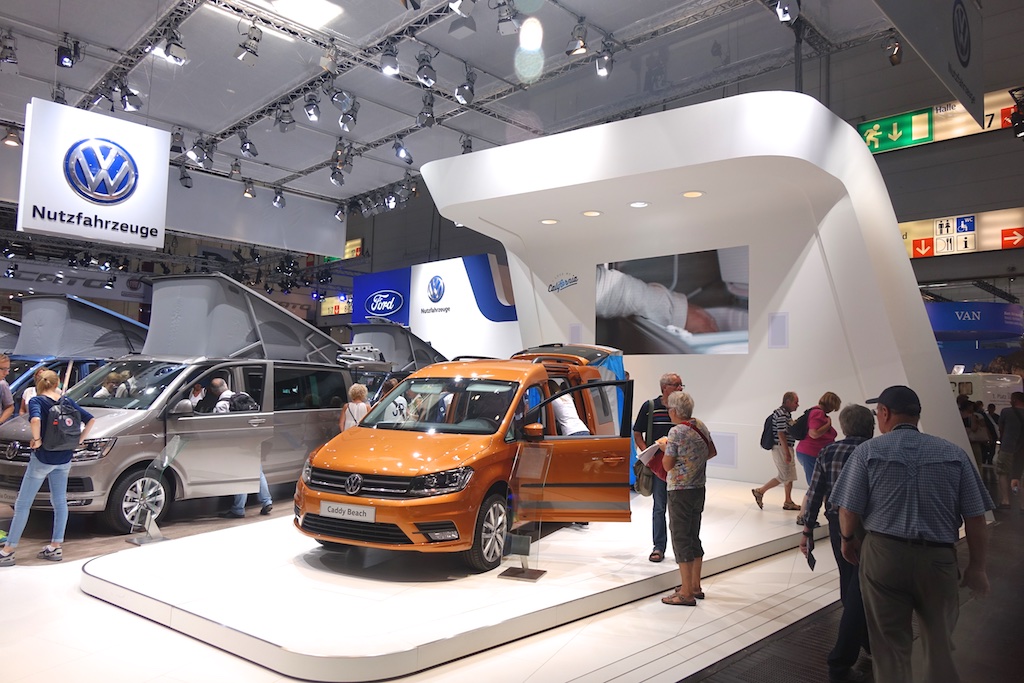 And the final photo is also a quiz. What's missing from the picture below? 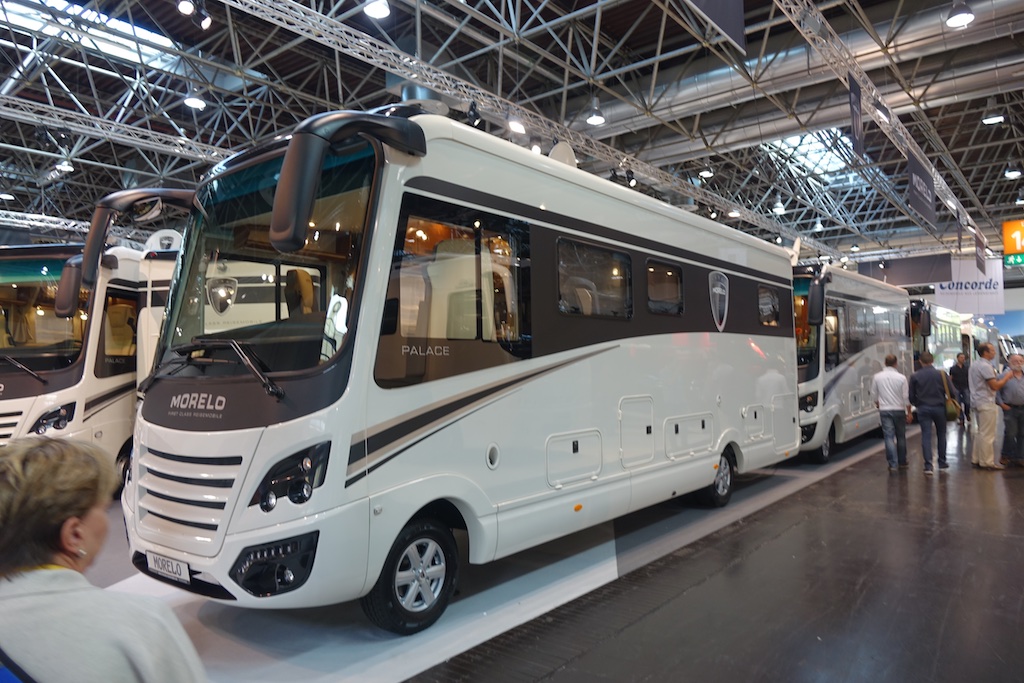 Big swirls! With very, very few exceptions, European RVs are painted white with simple paint highlights. This Morelo Class A is an expensive one and indicative of the general design scheme found throughout the European coaches.