RVer’s Guide to Pickleball
How to play and why this sport is so popular!
By: Ann & Lin Bishop 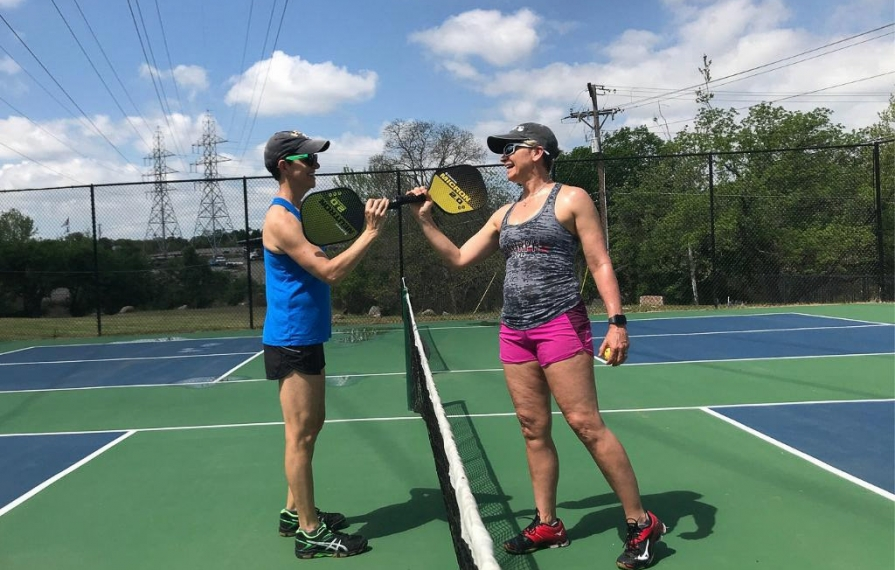 You are sitting outside your RV enjoying your morning cup of coffee and you hear a strange "pop-pop-pop." Curious, you walk around your RV and see a tiny looking tennis court off in the distance. There's a group of people, odd-looking paddles in hand, hitting a wiffle ball back and forth over a net. They're cheering, high-fiving, and noticeably having a good time!

Suddenly, a compulsive concern that you might miss out on an opportunity to take part in this fun comes over you. (Also known as FOMO - fear of missing out). So, you head over to the RV park office and ask what the heck they are playing.

"It's a game called pickleball. You should definitely give it a try," they say. And Lin and I couldn't agree more! In fact, that's exactly how we were introduced to the game.

The Origin and Appeal of Pickleball

Pickleball was invented in 1965 by three fathers: Joel Prtichard, Bill Bell, and Barney McCallum. They were looking for a game in which their entire families could play for the summer at Pritchard's home in Bainbridge Island, WA. Improvising with a badminton net lowered to 36" high, ping-pong paddles, and a perforated plastic ball, they worked together to create the now ever-popular Pickleball game. 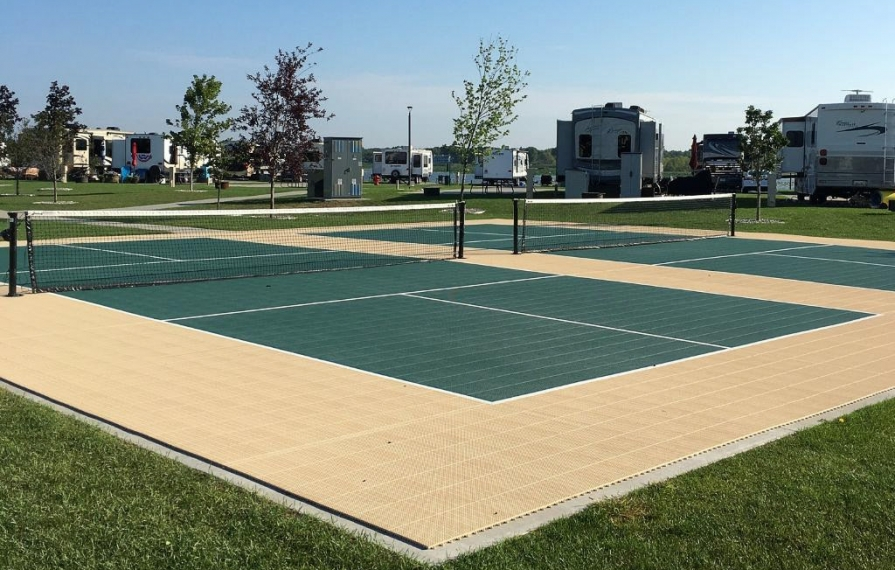 Ask any pickleballer why they play the game and you'll most likely hear "it's fun and highly addictive!" You'll also find that it appeals to kids of all ages including 70, 80 and 90-year-olds. Because it's played on a court roughly one-fourth the size of a tennis court, there is less court to cover. But, don't be fooled by the small court size, it's still a great cardio workout! If you do need to sit out a game to rest, you'll likely strike up a conversation with other players. Lin and I have made life-long friends on pickleball courts around the country. We 'rest' a lot!

And unlike many other sports, there is a low barrier to entry. The only equipment needed is a pickleball paddle, pickleballs, court shoes, and a friendly smile! And many RV parks will even loan you paddles and balls during your stay there. 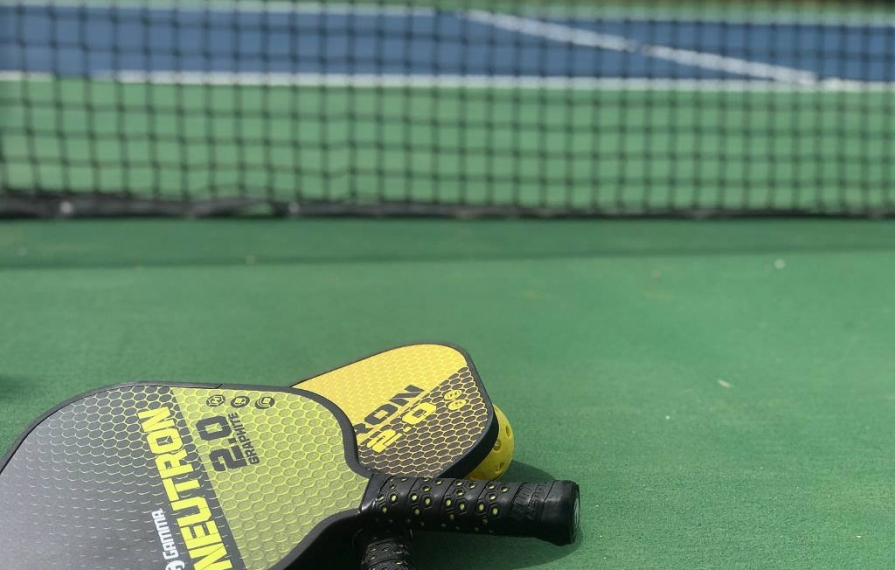 Basic Rules of the Game

Pickleball can be played as singles (one on one) or as doubles (teams of two). You'll find doubles to be more common among players. It is also more exciting as it lends itself to long volleys between the four players! Pickleball courts at RV parks are typically located outdoors. Indoor courts can be found as well and are a good backup plan when the weather imposes on the outdoor game.

The rules more closely resemble table tennis or badminton more so than traditional tennis. The game begins with one side serving the pickleball from the right-hand court. The serve must travel diagonally over the net and clear the no-volley zone (also called the kitchen). The player must keep one foot behind the back line and must strike the ball with an under-hand swing (without bouncing the ball). On the serve, the ball must be struck below the server's hip level.

After the serve, both sides must allow the ball to bounce first before returning the ball to the opposing team. After that, players may volley the ball (hit it without letting it bounce) as long as they are not in the no-volley zone (aka 'the kitchen'). 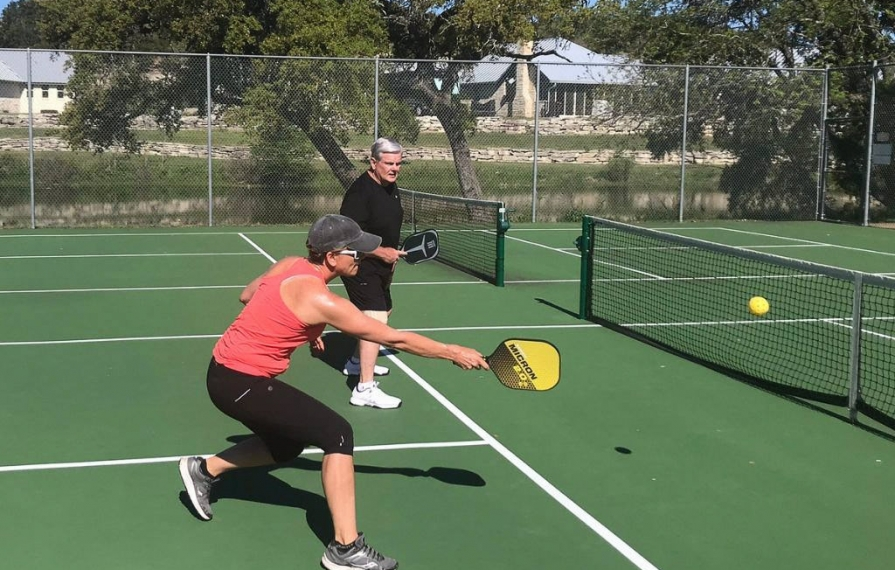 A player (singles) or a team (doubles) scores a point only when they have the serve. The game is played to 11 points and you must win by two points.

The following are a few of the more common faults, which cause the loss of a point (aka, a "side out"):

For a complete list of rules (and all things Pickleball), check out the USA Pickleball Association's website. 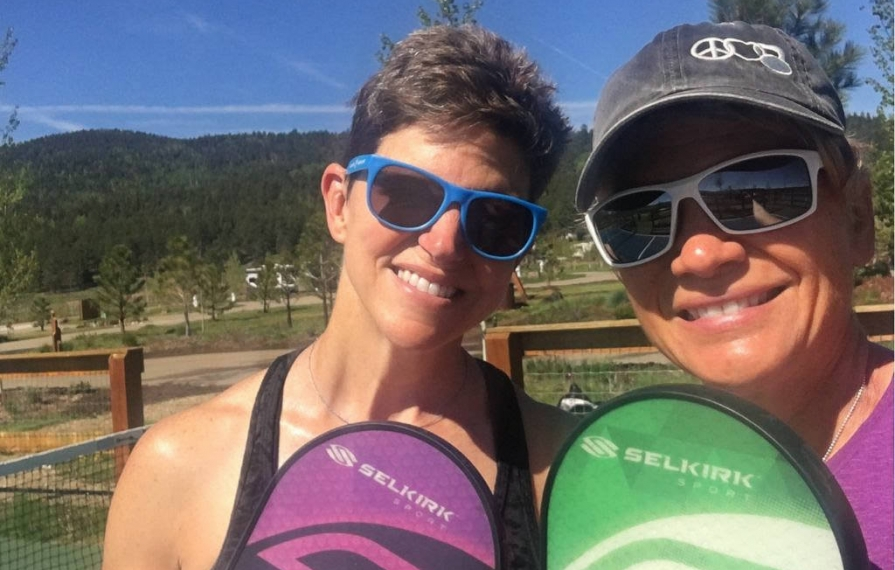 How to Find Places to Play Pickleball

Pickleball is one of the fastest growing sports in America. And many RV parks are adding pickleball courts or converting rarely used tennis courts to keep up with the demand. Just check the park's website, usually under 'park amenities,' to see if they have pickleball courts. Some of our favorites have been Buckhorn RV Resort in Kerrville, TX; Eastpoint RV Resort, Grand Haven, MI; and Angel Fire RV Resort in Angel Fire, NM.

If you do become addicted to the game like we are, you'll want to plan your RV destinations around pickleball locations! The easiest way is to use an app that pinpoints courts on a map. The one we recommend is called "Places to Play". It will show the locations of courts at RV parks, city parks, fitness centers, community recreation centers, churches and more. It also provides a description of each facility along with contact names and numbers. 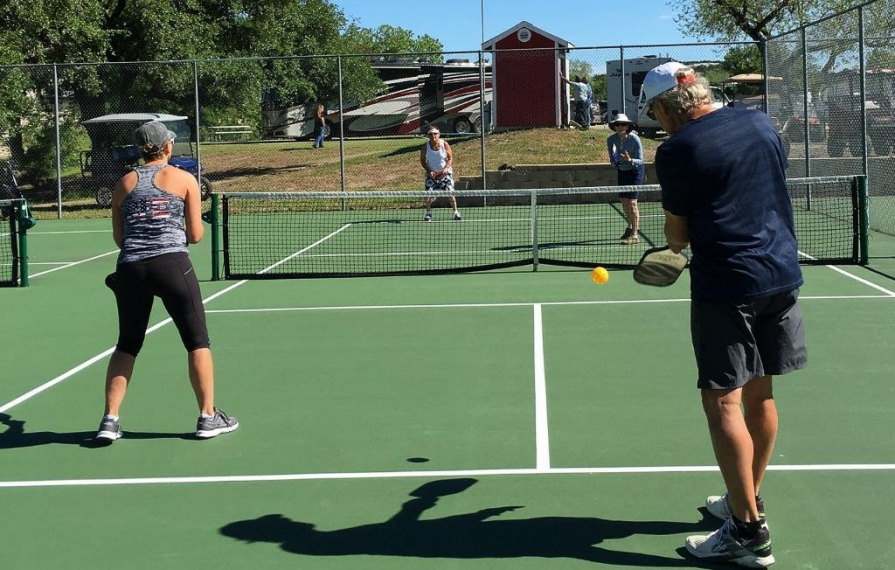 Now that you are armed with the basics of the game, get out there and give pickleball a try. You just may fall in love with the game. And that "pop-pop-pop" sound will become music to your ears!