RV Life with a Parrot

While many travel with dogs and cats, those of us that bring pet birds along for the ride are a rare breed. We travel with a twenty-three-year-old male blue and gold macaw named Bandit. We consider him to be part of the family, or we a part of his flock from his perspective. We also travel with two dogs, an eighty-pound Flat Coat Retriever and a thirty-pound rescue mutt. As odd as this menagerie may sound, it all works out.

As parrots go, blue and gold macaws are among the largest. Overall length from beak to the tip of the tail can be more than thirty inches, with a wingspan of up to forty. Their physical size belies the fact that they only weigh about two pounds.

Typically, folks want to know if he can talk. Bandit will blurt out the occasional "hello" or "goodbye," however, he only does so when he wants to. He does make various sounds, and we have been asked more than once if we had a goat in our coach! He is also capable of screaming loud enough to wake the dead. We learned to make sure the shades are drawn when we leave to walk the dogs, if not, Bandit will "ask" us why he is not included.

Lifespan is between thirty years for wild macaws, and up to about sixty for well-cared-for pets. Owning a macaw, or other large parrot, is definitely a long-term commitment. And doing so in an RV presents its own challenges.

Luckily, parrots are very intelligent animals, and Bandit seems to thrive on the mental stimulation he gets while on the road. However, it did take some planning and special considerations to make everyone comfortable.

Setting Up a Bird-Friendly RV

Bandit had a prior relationship with my girlfriend when I met her, so I quickly realized our RV lifestyle (which includes full-timing for part of the year) would include the parrot. There was no doubt we had to select an RV with enough room for all of us to coexist. We knew we wanted a smallish size coach. But, we had to rule out the smaller Class B's due to our pet "payload" requirements. So, we ended up with a Winnebago Spirit Class C (model 22R), which nicely accommodates us all. And at just under 24 feet, it's relatively easy to maneuver.

In order for Bandit to travel with us, we had to have a cage inside the RV for him. So, we decided to use a collapsible dog crate with a piece of PVC pipe inside which serves as a perch. While we are traveling, the cage sits on a padded plywood base on the bed in the back of the RV. Before we go to bed, we pick up the cage, holding the base, and transfer Bandit to the dinette area for the night.

We have to be careful to keep our fingers away from Bandits reach during the transfer. His idea of playing, can lead to a painful bite! 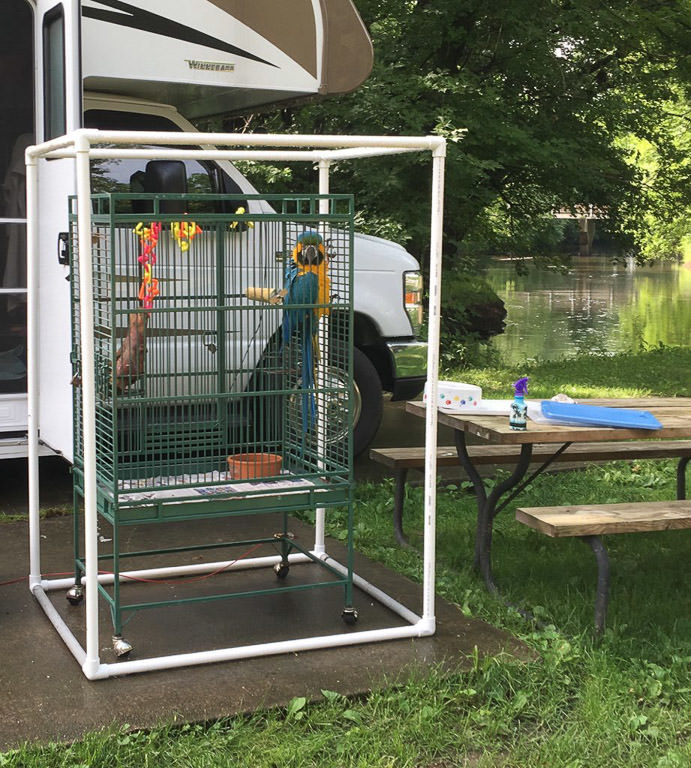 We also carry Bandit's large floor model cage with us, strapped to a basket on the back of the Spirit. When we are staying someplace for an extended period, we will set it up so Bandit can spend time outside the RV. He attracts a lot of attention whenever he is out, which he seems to thrive on. From time to time, Bandit will have feathers come out, which is part of the molting process. We save them and give them to people, children especially enjoy them.

In case of emergency, we carry a third cage for Bandit as well - a plastic pet carrier. This is used to move him around outside the RV, should we have the need. It came in handy when we had to evacuate to a storm shelter. Bandit had a great time, entertaining those of us waiting out the storm as he chattered away excitedly in the campground bath house.

Takeaways for Other Bird Owners

If you have a pet bird that you are not currently including in your adventures, consider the possibility of taking your feathered friend with you. A few of the positives we've realized include the mental stimulation our bird experiences while traveling with us, the ability to better maintain Bandit's diet, plus savings on a bird sitter. Also, including Bandit means he does not have to experience the separation anxiety of being away from his "flock."

However, traveling with a large parrot like a macaw is not for everyone. But, there are smaller birds, which can still provide companionship and can travel in your RV without taking up the space Bandit does.