I'd like to introduce you to Roxanne. She's our new second car, or our tiny house on wheels. She is a Flame Red 2015 Winnebago Travato 59G, built on the RAM ProMaster platform. We've just returned from a brief road trip to North Carolina, where we picked her up before stopping for the night at a campground outside Richmond, Virginia.

Yes, we bought an RV.

The three of us really enjoyed our inaugural RV rental trip this spring, and came away with the impression we'd be owners someday. I'm still a little surprised that we pulled it off so soon.

How? We had the Prius sale money and some extra savings from the sale of our DC house a couple of years ago. For the last year, we'd been paying ourselves first into a taxable Vanguard account, with an eye toward using it to achieve financial independence in our early 50s and stop working full-time if we want.

I first got the idea of an RV-based, traveling early retirement from the Can I Retire Yet? blog. We decided we'd probably sell the house when XY went to college, buy a cheaper condo, and use the proceeds plus our savings to buy the RV and travel around.

But plans have a way of changing, and we realized we've got a grade-schooler who loves to travel and won't be small forever. We've also got a busy summer and fall travel season on deck, with many hundreds of dollars in flights, hotel reservations and rental cars to come. We decided to run some numbers with our financial planner. What if we tightened here, redirected there and pushed the early retirement horizon back a year or two? Turns out the formula worked! So we liquidated that Vanguard account and joined it with the savings, and we took the plunge.

About Roxanne, and how we picked her

The classic style of RV that hasn't changed much in decades is the Class C. We rented a 19' compact rig from Cruise America for our spring break trip. They're usually, though not always, boxy and utilitarian with lousy gas mileage. The cab-over bunk design interferes with stability on busy highways, as I found in western Illinois and most of Iowa. And they tend to be big and pretty conspicuous.

With a rental trip, an RV show and a few dealer visits under our belt and many, many blog posts read, Lindy and I decided Class B was the way to go. (Class B motorhomes put everything inside the body of a tall cargo van, rather than starting with a chassis and putting the camper body on top.) There are only three of us, our driveway space is limited, and we liked the idea of being able to go anywhere a van can go. Boondocking (camping without connecting to water or power) is easier in a B in one sense because you can fit into smaller spaces without attracting much attention, harder because the tanks and batteries tend to be smaller. We wanted to buy slightly used to save money, as we always do with cars, but also so any of the minor new-RV problems would be worked out already.

The Mercedes/Freightliner Sprinter platform is the most popular one for building Class B motorhomes in the United States. They're durable and have a great towing capacity. But we didn't want one because they're diesel, which makes fuel harder to find and possibly more expensive, and because the dealer network isn't as widespread as we'd like. There are a bunch of Chevy or Ford full sized van models on the used market, but the ceilings are very low and the fuel economy pretty lousy. They also don't sleep more than two unless you lay some sort of board across the front seats as a makeshift single bed. 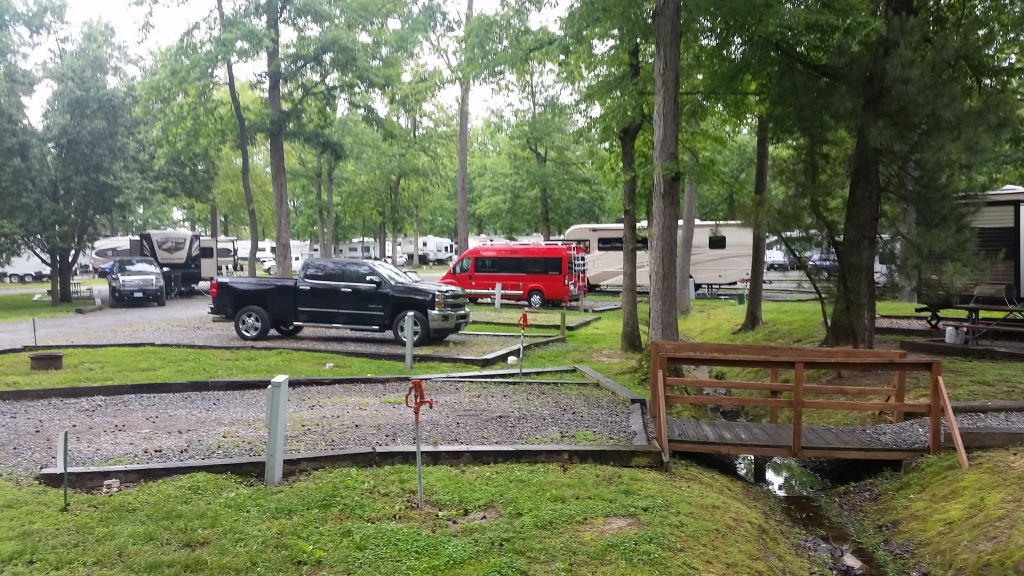 Roxanne among some of her peers, outside Ashland, Va.

The most popular platform for building Class Bs in Europe is the Fiat Ducato. On these shores, it's known as the RAM ProMaster. And the most popular Class B in America is the Winnebago Travato. It is reasonably priced compared to other Bs, and has some features that nobody else has: 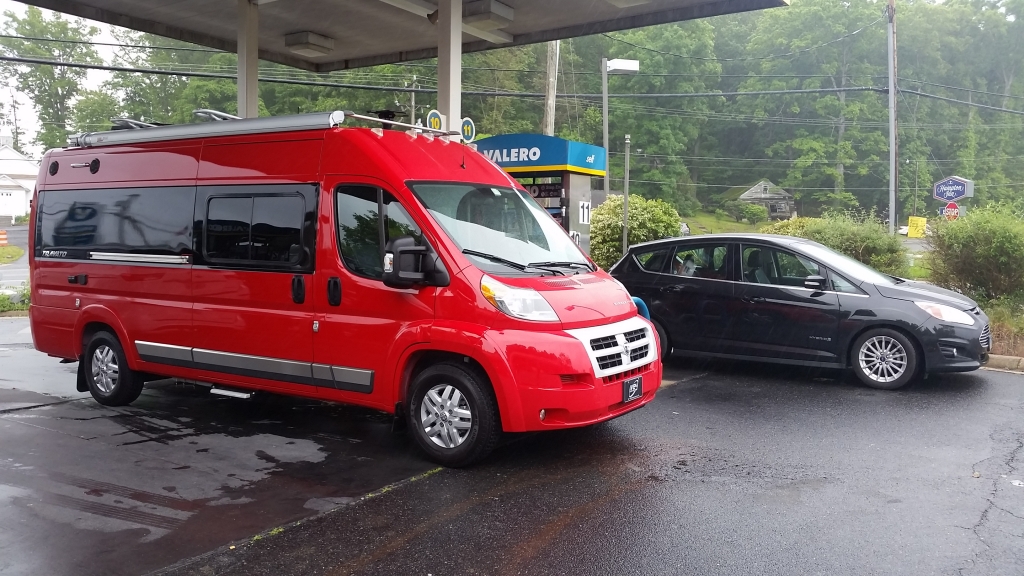 Roxanne with our other car, which doesn't have a name and gets twice the miles per gallon!

Travatos come in two models: the original 59G with the Murphy and dinette beds, and the newer 59K with two twin beds. The sleeping configuration in the G is better for us. Also, the G carries up to four seated passengers while driving, and the K only carries two.

So we knew we wanted a Travato 59G, model year 2015 or 2016 because of the improvements Winnebago made from the 2014 version. Among the options, we wanted full-body paint and screens for the side and rear doors. I cruised RVTrader and starred a few units in our price range and within a day's easy drive of where we live. I ended up getting in touch with a luxury used-car dealership owner in North Carolina who had bought a red 59G a year ago and never had the time to use it with his family. We agreed on price and a deposit, and set a pickup date several weeks later. Bonus: because the owner is a dealer, he could issue temporary tags. We could put off permanent registration in Maryland, and paying the 6 percent excise tax, for another 30 days.

She's Roxanne because she's bright red, so she doesn't need to put on the red light. She's also Roxanne to honor Roxy, our wonderful goofy hound who sadly had to find another home after an escalating series of fights with our other dog Penny. One of these fights was in our brand-new tent the last time we went tent camping last October, after which we decided we were done with tent camping and potentially interested in an RV.

Once we get to know Roxanne a little better, get her outfitted and learn about how she fits into our lives, we plan to put a rental listing on Outdoorsy to help defray the purchase and operating costs, and to get more use out of an asset that's going to sit idle for much of the time.

With a new RV, a minimalist outlook

Along with Roxanne's arrival, writing some new postings and talking with friends, I'm changing the name of my personal blog to Chasing Minimalism. Cutting the clutter in our house or bringing order to our finances is about minimalism. But minimalism, for me, is an aspiration that will never be perfectly realized.

Like everything else in life, minimalism requires balance. Minimalism might mean getting rid of a car you don't need. But is it possible to be a minimalist when you've got a 9,000-pound, bright red motor vehicle just barely fitting in your driveway? Does being extra cautious about every ounce of water and every amp of electricity help? I'm not sure. But I know it's possible to chase minimalism down America's roads in one, and we certainly plan to try. Chasing Minimalism is about the journey.

By the way, I'm still hopeful. And I still like that Decemberists song.