Greetings from Lindy's ancestral homeland of Grand Rapids, Mich., where we've returned after a fun, successful long weekend at P.J. Hoffmaster State Park in Muskegon. We're all still speaking to one another -- in fact, we had a great time -- and Roxanne was perfect company.

It was a journey that began Wednesday, when the three of us saw The Cure at Merriweather Post Pavilion near where we live in Maryland. Back in December, when we made plans to see the concert and go on the camping trip, we were going to drive straight to the airport after the show and fly to Michigan. But that was before Roxanne came into our lives. So the new plan: see the Cure, hit the road, drive for a couple hours, crash, make the rest of our way to Michigan the next day.

Lesson 1: Having a small RV at a rock concert is awesome.

You've got your own food and drink in the fridge. Your car is easy to find in the parking lot. You can tailgate if you want to. (We didn't.) And you don't have to wait in line for the bathroom when you're leaving the show, because you have your own bathroom. Our minds full of music we'd been enjoying for 25 years and just heard again live, XY asleep in the dinette seat, a quick vegan caffeinated boost down the hatch, and we got on the road for points west.

We spent the night in the parking lot of a Wal-Mart in Everett, Pa. It's a known thing in the RVing and semi trucking communities: Wal-Marts and Cracker Barrels will often let you park overnight for free. You show up, look for other overnight guests and park as inobtrusively as possible near them. Don't put out your awning, don't play music, don't fire up the grill. Just park. So we did.

It was our first time switching from paying good money to stay in a hotel, have a free breakfast and take a hot shower, to sleeping on someone else's property for free. And I'm happy to report that absolutely nothing bad happened. Aside from a beagle in the front window of a semi parked next to us and some raindrops on the roof, nobody bothered us. It was plenty quiet and not too bright under the lights. We got a decent night's sleep, woke up the next morning and decided to have some breakfast. 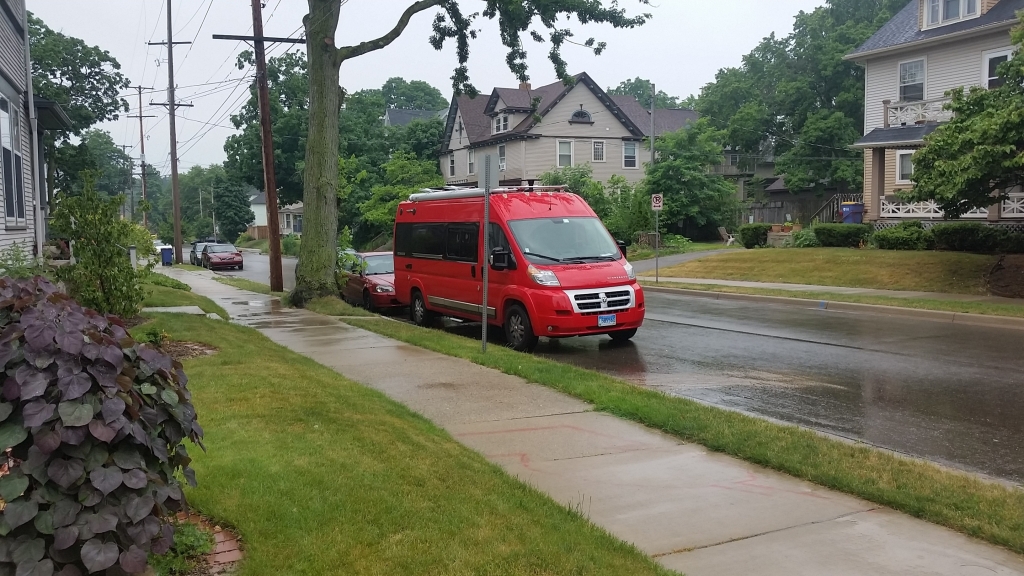 Lesson 2: You can't run an electrical appliance off the coach battery.

If you want to plug something into an outlet (or run the air conditioner or microwave), you need shore power or the generator. So I fired up the generator for the first time, just for a couple minutes to heat wanted for coffee and oatmeal. I also ordered us a kettle so we can heat water on the propane stove next time. We ate, washed up, changed clothes and headed out for Michigan. We drove through a few hours of nasty storms.

Not once did I feel unsafe passing someone, or being passed by a semi, as I often have in smaller cars. There's a high vantage point, a big windshield and a very heavy body contributing to a great feeling of stability in that thing. We did have to stop for gas a couple of times. And we've decided, at least for now, never to go "moon walking" or unbuckling our seat belts to go use the bathroom while another adult is driving. So we had a few bathroom breaks too. By dinnertime, we'd caught up with our family and were turning heads on the way through a campsite full of tents, pop-ups and beige fifth wheels.

Lesson 4: We can boondock for about three days.

We stayed at Hoffmaster on a site with an electric hookup for three nights. The campground had a centralized sanitation station for dumping the gray and black tanks and filling up with fresh water. We ended up doing a dump and fill (Lindy's first) on our second-to-last day, because the gray water tank was getting pretty full. The Travato carries 21 gallons of fresh water, and has a black (toilet) tank that holds 11 gallons and a gray (shower, kitchen sink, bathroom sink) tank that holds 15. We used the campground shower, so we've never actually put that feature into action yet. Dumping and filling took 20 minutes with no mess and no mishaps, and we even met a fellow Travato owner -- our first -- who pulled in behind us before we were done. The electric hookup would have been ideal for running our air conditioner, but the Lake Michigan nights were plenty cool enough without it. One night, we actually closed the vents and the windows and got into our sleeping bags. In June!

I didn't miss the water and sewer hookups on site, and I much prefer the more natural, less paved and less expensive setting of a state park over an RV park. Most of my camping to date has been in state parks, and they're great.

Lesson 5: Family camping traditions are even better with an RV.

We loved catching up with Lindy's family and longtime family friends on this trip that's been taking place annually for decades and now includes multiple generations of people. (XY was the only grandchild to attend.) The company and the food were outstanding, and an historic cooking overshoot by my father-in-law has had us all happily eating spaghetti for days. The park is beautiful, with just enough space between campsites for shade and a little privacy, and the weather was perfect for spending time on the Lake Michigan beach.

This is my second time on the journey, and the last time was in a tent. Here's what went better. Being able to pull in after a long day of driving and not have to pitch a tent, especially in the dark, was awesome. Having a bathroom on our campsite was also awesome. Unfortunately, we overslept the last morning and woke up to a rainstorm, which meant everyone was pulling up stakes and we missed some goodbyes. But being able to pull our shoes into the van from outside, disconnect the electrical and immediately hit the road was the final bit of awesome -- instead of having to take down a wet tent in a rain storm, stuff it in the car and dry it out at home.

Lesson 6: We still have some learning to do when it comes to navigating space.

Overall, we did very well. I'm pleased with our decision to go with the Travato instead of something larger like a Trend. Boondocking and getting in and out of small spaces is much easier. But there are tradeoffs, and a family of three must communicate to navigate.

The first night at the campsite, I put in my silicone earplugs and crashed. I am also the one who sleeps on the outside of the bed in the back. I have no memory of this incident, but apparently Lindy had to try to bend my legs upward to get into bed. We talked about installing some sort of a grab bar for later, in case this happens again.

The second morning, I woke up rather suddenly and knocked Lindy's head into the cabinet behind her. After apologizing profusely and ensuring XY that her mom was okay, I heard about this incident from every one of the 14 adults in our group for the rest of the day. We stopped grumbling at each other after we both remembered the hilarious, totally NSFW rebuke of the whole tiny house phenomenon we'd read a few months earlier.

But we found the rhythm of announcing our intention to go to the bathroom, saying "right behind you" on a regular basis and such. And back in my inlaws' sticks-and-bricks home for the night with Roxanne parked across the street, we really do love our tiny house on wheels.

You can learn more about Alan on his blog: Chasing Minimalism