Rolling Through the Years

One of the best ways to embrace the possibilities of the miles ahead of you is to reflect warmly on the miles behind you. It is an irony of the open road. And maybe a good primer for optimistic aging.

I'm always energized by the image of a road rising toward the horizon, welcoming me forward. But as Amy and I prepare to embark on our 17th annual summer excursion as the RV Industry Association's "Explore America Team" (we're hitting the road in a 2017 Winnebago Vista 29E), I decided to take a good look in the rearview mirror. Or maybe a couple of side mirrors and a rearview camera. What I discovered was a phase of life well-lived.

On our very first summer RV tour in 2000, we were expecting our first child. As we cruised the highways in a 33-foot Winnebago Adventurer, every bend in the road symbolized a future to be determined. For the next decade, our June-to-August jaunts were designed around Luke and Jesse, born 19 months apart. (Since 2012, it has been just Amy and I again on the road while our two sons attend summer camp in Wisconsin). And though we've only traveled for two months out of every 12, many of our best memories with our kids tend to be road-trip recollections--moments that linger as unforgettable snapshots, lively experiences that tend to suggest life lessons. 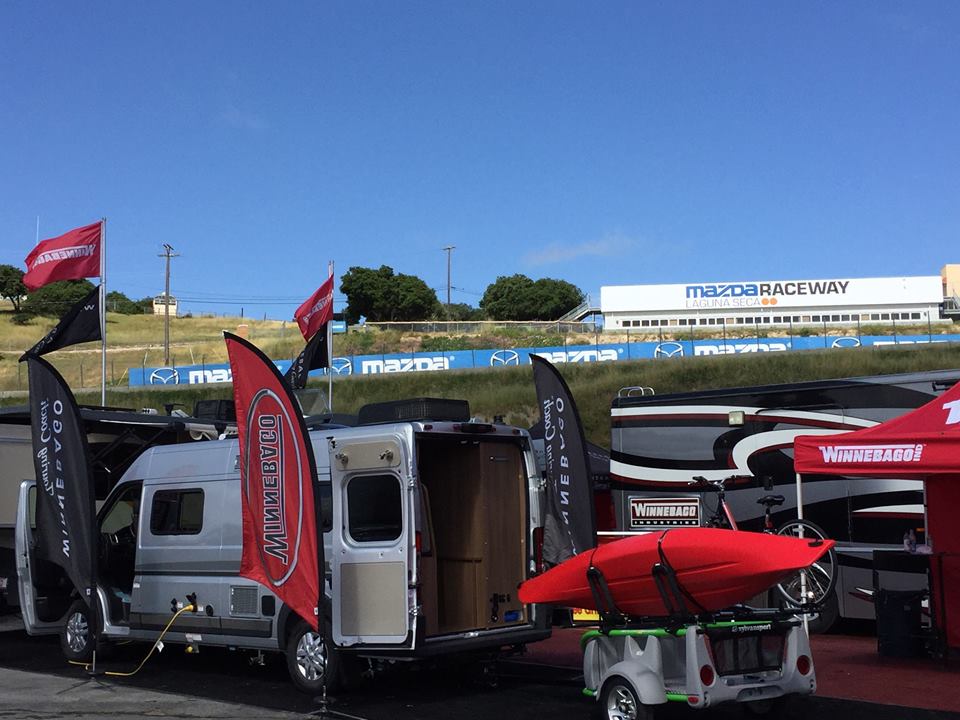 In the early years, this was the usual cruising scene. But wide-awake moments were wondrous, often unexpectedly so. In 2003, for instance, we visited everything from San Francisco's Candlestick Park to South Dakota's Corn Palace. But one of the highlights of the trip was a spur-of-the-moment stop in Elko, Nevada, where we came upon a festival-in-the-park experience that turned a dusty western outpost into the center of the world for an afternoon. It was a reminder of happy happenstance. Sure, that trip took us to must-sees like Seattle's Space Needle and Salt Lake City's Temple Square, but little Luke's two favorites were a snow cone and a ride on a mini train.

Lesson learned: You can aim high, but a two-year-old sees the world from a different perspective. 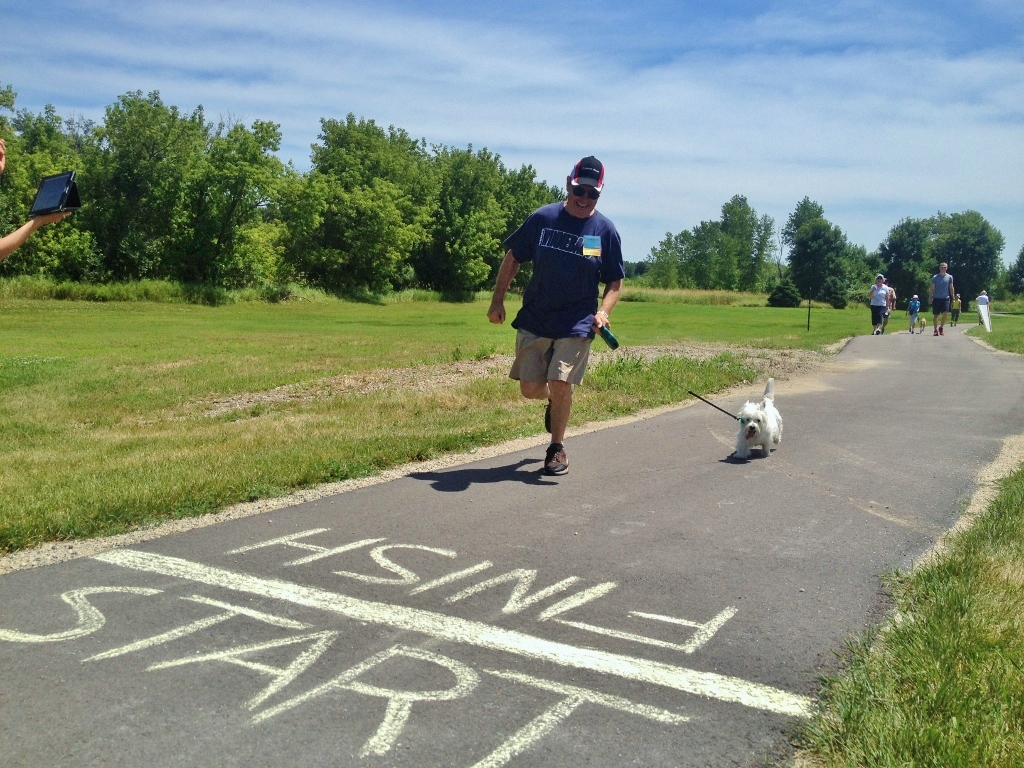 The following year, we spent the first half of the summer cruising through the Heartland, again in a Winnebago Adventurer. We boarded a riverboat in Hannibal, Missouri. We joined the crowd at Winnebago's Grand National Rally in Forest City, Iowa. And we began to realize that these summer journeys offered the perfect opportunity for education disguised as entertainment. So we hit every children's museum we could find--in Milwaukee, Indianapolis, Rochester, Palm Springs, even Bettendorf, Iowa. And the Magic House in St. Louis, too, where 25-month-old Jesse posed for a photo for the ages. 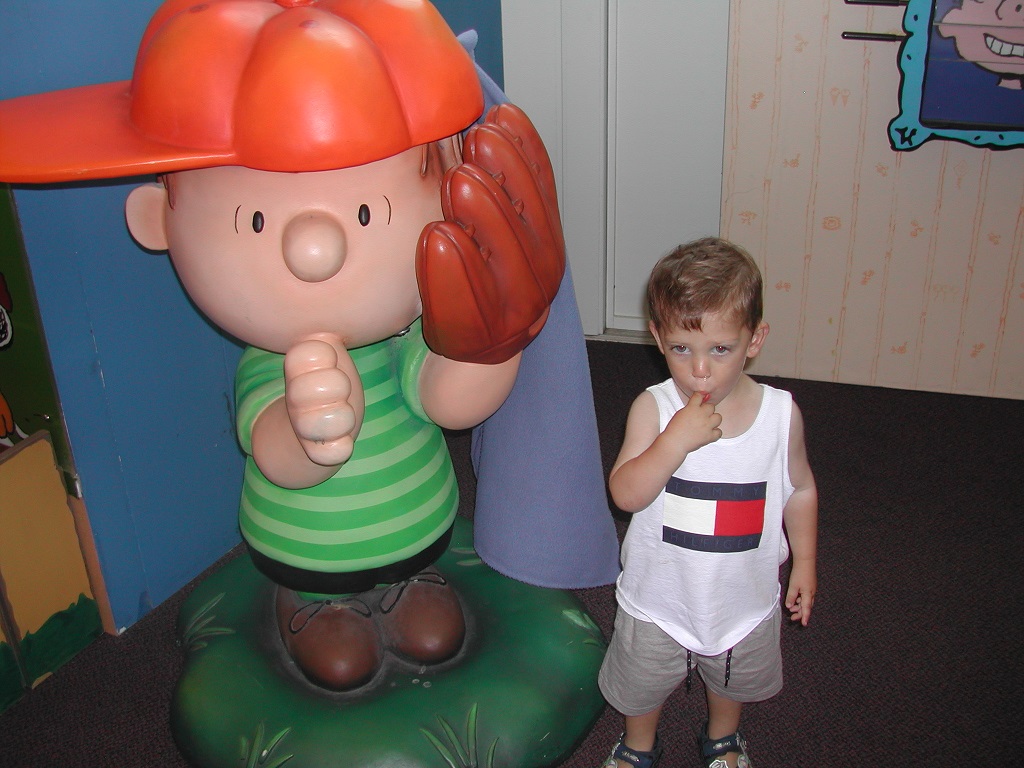 The second half of that summer trip was an eastern excursion highlighted by a drive along the Blue Ridge Parkway. We stopped in a little hiccup called Love, Virginia, where Amy and I had met a nice-as-can-be couple named Billy and Lynn Coffey about a decade earlier when I was researching a book called States of Mind, the first of my trilogy of travel memoirs. The Coffeys are proud mountain folks. They built their log home themselves. They can their own food. They hunt for sustenance. They raise chickens. They live simply and serenely in Love.

For Luke and Jesse, it was a window into an unfamiliar world, made possible by our summer explorations. Lesson learned: Memories will fade, but the reverberations will linger. And you can't unring a bell. 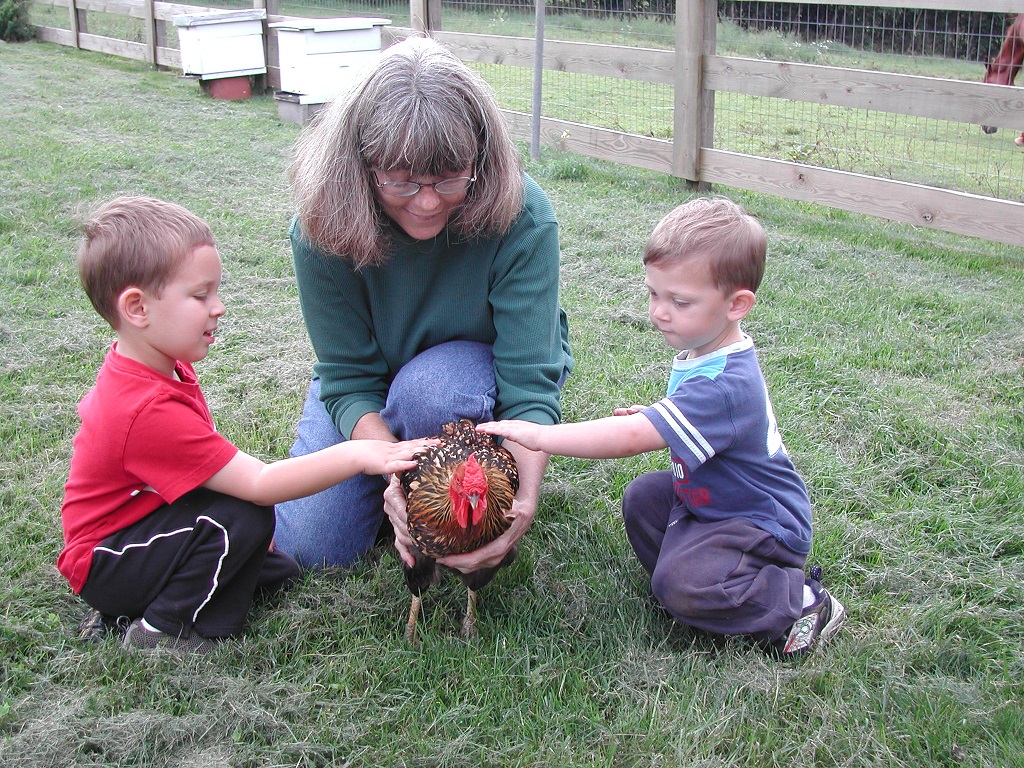 In 2005, we convinced our pals Adam and Steph (and their two sons) to join us. Since they own that summer camp in Wisconsin (a magical placed called Camp Nebagamon, where Adam and I met as campers nearly 40 years ago), we replaced our usual summer trip for a winter caravan through the Southwest in a pair of RVs. Ours was a triple-slide-out 38-foot Adventurer that year; theirs was a rented Winnebago Chalet. We traveled in tandem to Disneyland and Legoland, New Mexico's White Sands and Carlsbad Caverns, the Alamo and Space Center Houston, Joshua Tree and Grand Canyon. Our kids had cross-country playmates. So did we. Lesson: The best way to show how much you treasure an experience is by sharing it. 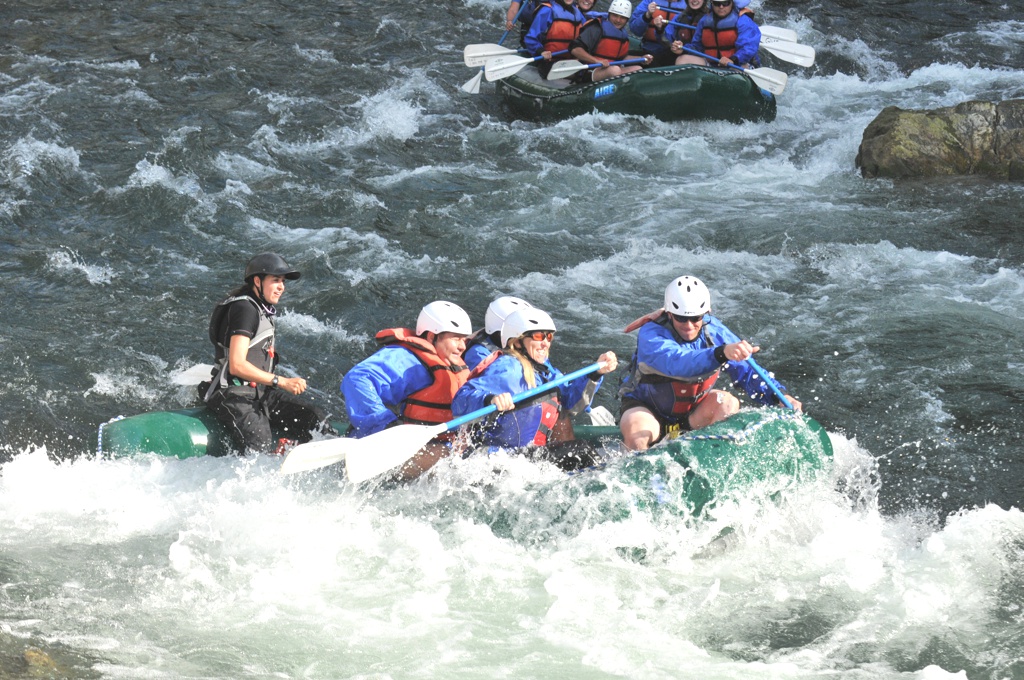 A few years later, one of our epic journeys allowed us to introduce our kids to a handful of iconic first visits--to places like the Hollywood sign, the San Diego Zoo, and the Las Vegas Strip. But the most memorable couple of days during that 2008 trip took place in Colorado Springs in early July. Day One was recapped by seven-year-old Luke in his elementary school journal a couple of months later. This is the unedited version:

Thes summer I went on a rv trip. One thig I did is somthing I call the bestis day ever. Ferst I went to the pool. Then I went to cave of the winds. Next I went to a arkad. Then I aet ice crem. Finly I red hary pooter.

Need a translation? Luke's "bestest day ever" featured a swim in a KOA campground pool, a tour of Cave of the Winds, a couple of hours at an old-school penny arcade in the historic town of Manitou Springs, a bowl of ice cream and Daddy reading Harry Potter before bedtime.

Then again, on the very next day--the Fourth of July--we rode an incline cog railway to the top of Pike's Peak. While we were strolling along the summit on a sunny-but-breezy day, snow flurries began to fall, followed by a rainbow (snowbow?) arching across the sky. So on Independence Day, as we stood atop the mountain that inspired "America the Beautiful" and the "purple mountain majesties," Mother Nature threw us a party with some natural confetti. 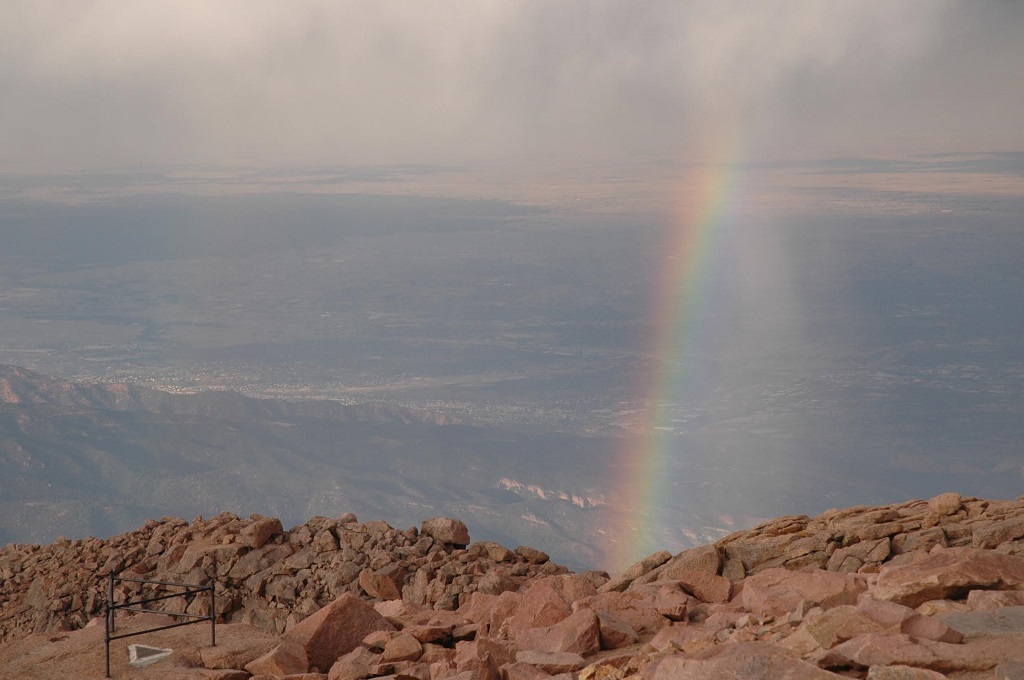 Another lesson: Little things can loom largest in your memories. Our 50-day trip in 2009 took place in an experimental electric-diesel hybrid RV from Winnebago. And it took us from Chicago to Key West and back. We visited the Gateway Arch in St. Louis and the Civil Rights Museum in Memphis. We drove the Natchez Trace through Mississippi. We took an airboat tour through the Everglades. But again, my smile grows widest when I recall an experience on a smaller scale.

On the way back to Chicago, on the outskirts of Dayton, Ohio, we visited the Iona Miniature Horse Farm. A mini is any horse that doesn't exceed 34 inches in height. So strolling past a dozen or so of them felt like walking through a pre-school playground. I suppose it is best described as six acres of cute.

But then the farm's owner took us into the pasture that served as a maternity ward of sorts. He opened a gate, and out came a bunch of mares with their newborns galloping at their heels. So actually, there are two things more adorable than miniature horses--mini fillies and mini colts. 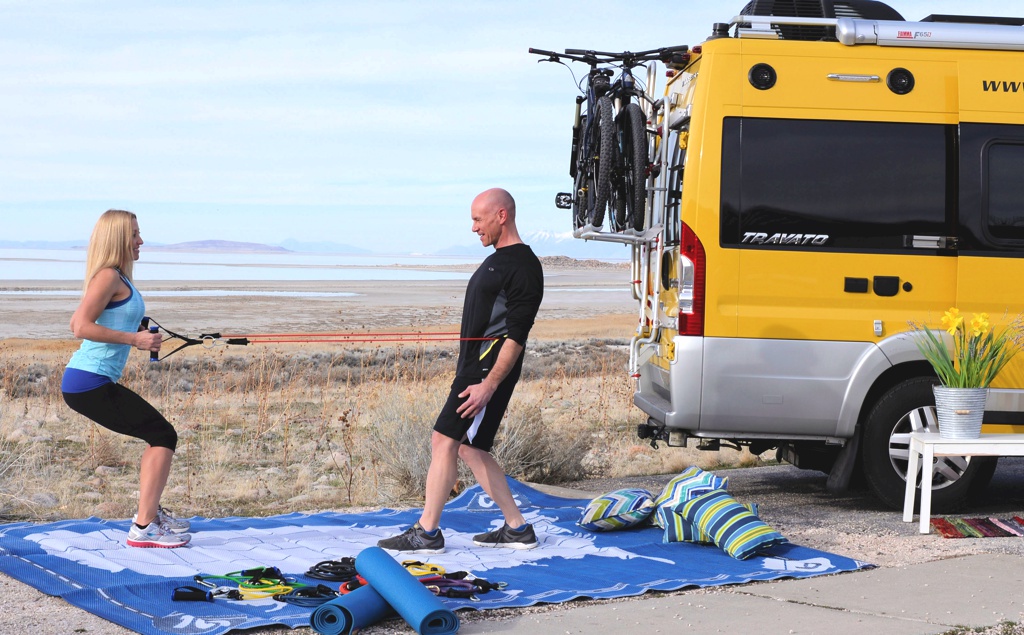 Another irony of the open road is this: By traveling, we've been able to celebrate ancestral roots by maintaining relationships with extended family. Our 2010 journey included stops at Churchill Downs and Niagara Falls, Woodstock (Vermont) and Bar Harbor (Maine), Plymouth Rock and Pictured Rocks National Lakeshore. But we also visited cousins in central New York, and Washington, D.C., and Philadelphia and Grand Rapids. And we met up with my parents in my mother's hometown of Butler, Pennsylvania--on the day of my father's 70th birthday.

It wasn't so much a lesson as a reminder--that there may be nothing as sincere as a smile amid family. I suppose this photo from later that summer--at Michigan's Sleeping Bear Dunes--well encapsulates that notion. 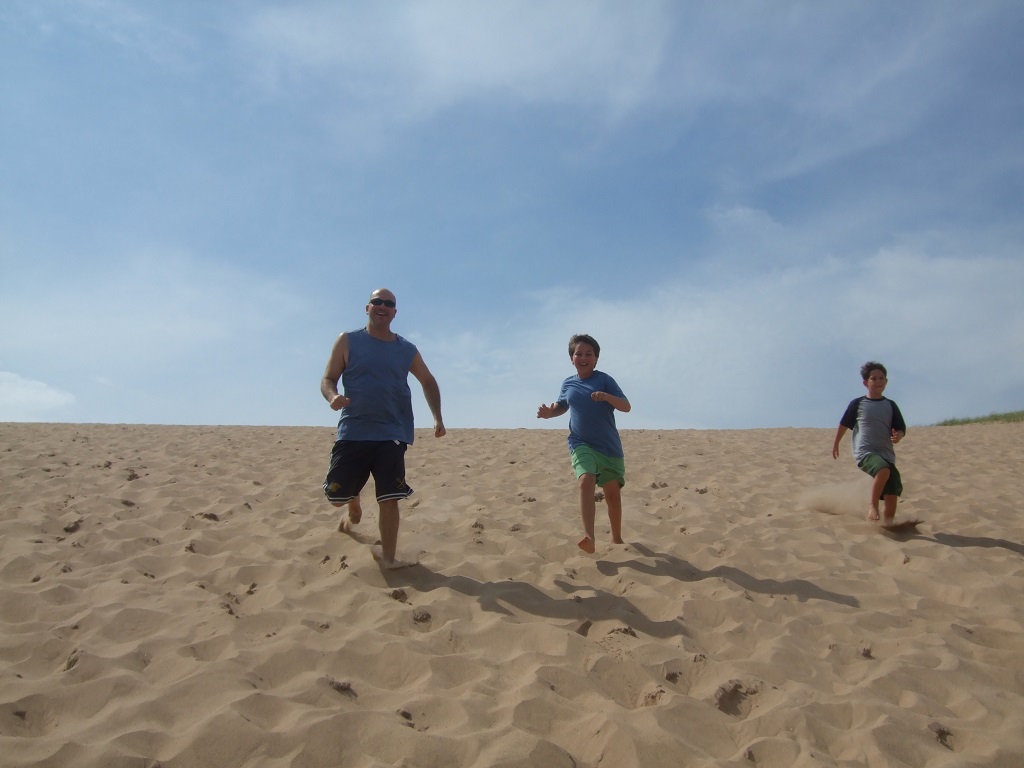 Our final foray as a foursome took place in 2011, and now the boys were old enough that we could actively immerse ourselves in the American experience. We wandered through northern California's Lake Shasta Caverns and strolled under the trees of Redwood National Park. We climbed to the top of Oregon's Multnomah Falls and walked among the geysers of Yellowstone. We scampered through Arches National Park and crossed Colorado's Royal Gorge and hiked around the base of Wyoming's Devils Tower.

Toward the end of the trip, after wheeling through the Badlands, we came upon another one of those unexpected experiences. It was a rodeo in Interior, South Dakota--bull riders and bronco busters and cowboys and clumps of dirt flying everywhere. 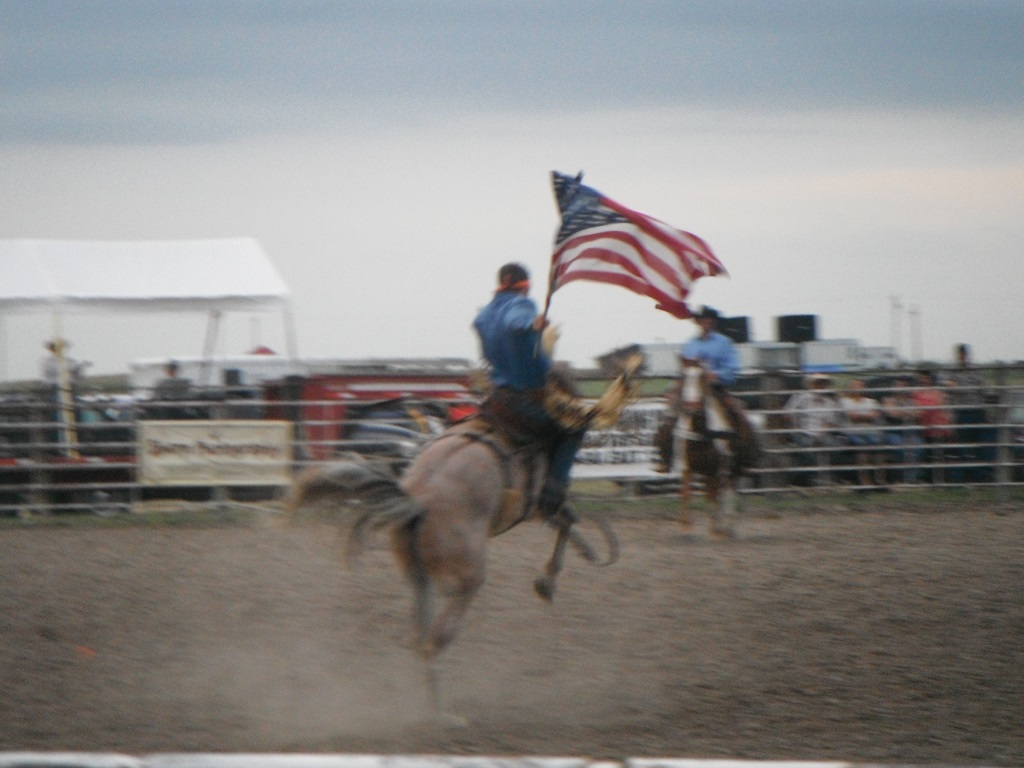 And here was a fine metaphor for what we as parents tried to provide for our kids. Driving cross-country can be like riding a bronco. You're looking for quality time. You never know quite what to expect. You navigate with a combination of fearlessness and foresight. And sure, there are occasions when you feel like you're hanging on for dear life.

But the ride is always exhilarating.