Our Crash Course on Inclement Weather

I'm not sure why Winnebago hasn't added this feature yet, but our View didn't come with a forcefield that blocks out bad weather. As amazing as our adventure mobile is, it can't keep us in an always-sunny bubble -- something we learned right away!

Hunkering Down for Hail 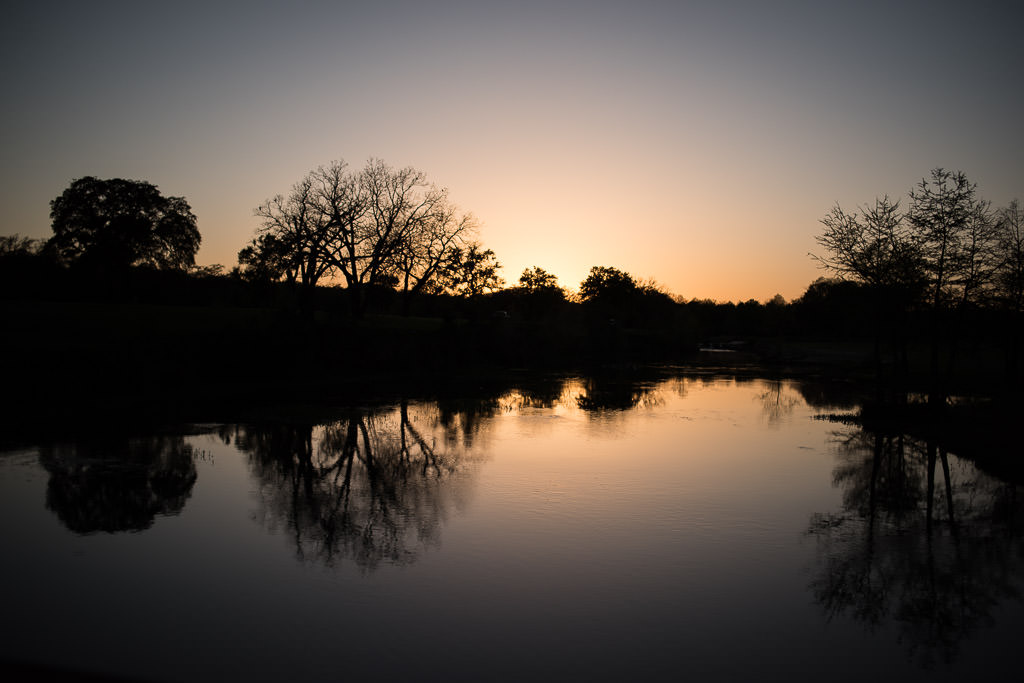 Our first run-in with Mother Nature as RVers happened only a few days after picking up our new home. We were at the beautiful By the River Campground in Kerrville, TX, when we saw a thunderstorm in the forecast. Knowing Texas is known for some pretty wicked hail, we braced for impact.

As we heard the constant "tap-tap-tap" on our roof, we prayed it wouldn't turn into "thud-thud-crash." And although there was so much hail we could barely hear the clap of the thunder, we made it through the icy assault on our RV with no dents or broken windows.

It felt great to get this initiation into bad weather out of the way! And we were even blessed with a beautiful, storm-free remainder of our first week.

Then on week two, we moved to a park outside of San Antonio, TX, to help out with some family stuff. And sure enough, the hail was back, but this time there were tornado warnings to go along with it. We watched the clouds roll in quickly during our morning walk and got back to Vik the View just in time for the rain to begin.

Then the warnings started coming in on our phones. We sat for hours listening to the emergency weather channel on our walkie-talkie until the tornado warnings were over. And our anxiety levels were way up.

After this experience, we didn't feel proud of ourselves for getting through it. We felt horribly unprepared. The two of us basically just sat around debating what to do for three hours. The logical thing would be to go into the office and wait it out, but no one else seemed to be leaving their RV. So, we didn't either.

Turns out this is really dumb and dangerous. A tornado could rip apart our rig and we don't want to be inside it if that ever happens. Next time, we will make safer decisions and be better prepared.

After our tornado drill, we craved the peacefulness of the Hill Country. We decided to spend our last week in Texas at an RV park located right on the San Marcos River. Pecan Park Riverside RV Park had gorgeous views, great people and we even ended up running into our friend Jill there.

After catching up with her in the hot tub on our first night, we thought this was sure to be the relaxing week we were hoping for! Then the inevitable storm came the next day. However, I didn't mind. I had a lot of writing to catch up on and a good book to read. So, I turned off my phone and enjoyed the rain and thunder in the comfort of our RV.

But when I took a break for lunch, Buddy broke the news to me: We had been under a flash flood warning all day. I didn't get the alert because my phone was off and he didn't tell me earlier so I could be productive and not just worry all morning. But, the rain had basically stopped by then, so I was excited to have weathered my third big storm without even a second of stress. Then I looked outside. 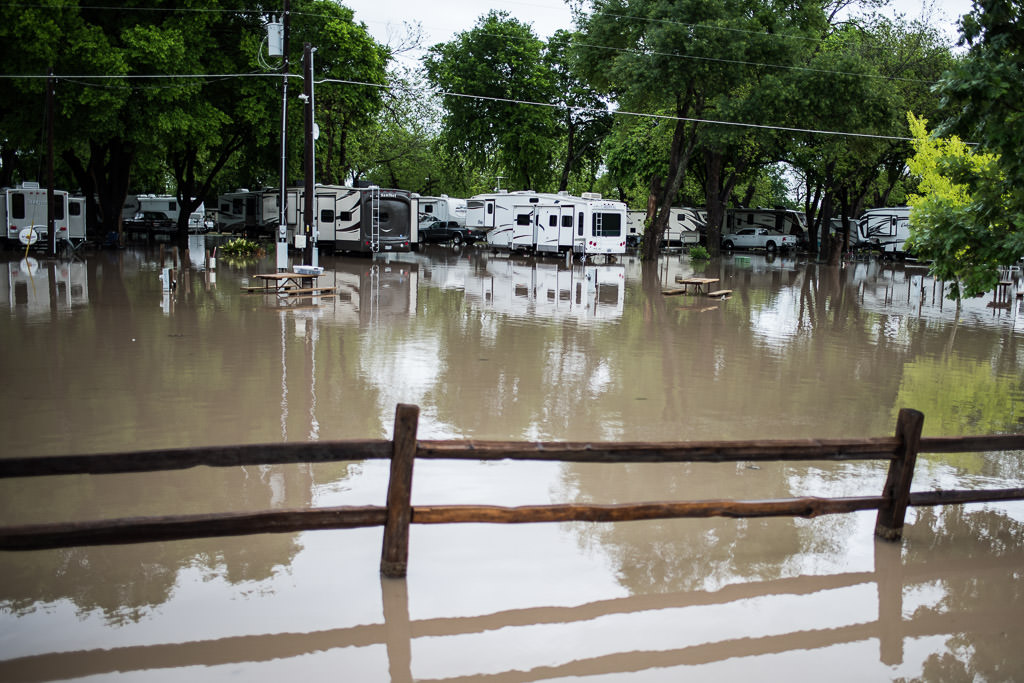 It had rained so much that we were basically on an island. Luckily, we were on a slight hill, but many of our neighbors had water up to their steps. And there were rivers where some of the roads used to be. My heart rate began to increase, but I kept telling myself it was okay because the rain had stopped.

So, we decided to wander around to assess the situation further and check on our friend Jill. Thankfully, she was in a high area too. But, then someone walked by and told her she should move her Vespa in case more water came. More water?

Apparently, we were still under the flash flood warning for another two hours. Since we were on the river, there could be more water rushing our way as we were wandering the property. And, it is also important to note that the park we were at was destroyed by flash floods two years earlier. This is when I started panicking.

I told Buddy we needed to leave, but he reminded me the roads were flooded. So, we were just stuck, hoping more water didn't come and wash our home into the river. Something not so far-fetched, since it had happened before. Thankfully, instead of more water coming, the water receded as quickly as it came and the drama was over. Of course, we went out to celebrate with Jill and ended up having a fantastic week with no more rain.

Looking for Refuge in New Mexico

Even though the weather didn't keep us from having a good time in Texas, we decided we needed a change and a much drier climate. After a short planning session, we quickly set out to New Mexico.

Our first week was pretty much perfect! Aside from being hot and a little windy, things were going a lot smoother. There was one extremely windy drive that actually made our Electronic Stability Program go a little crazy. But, we just stopped and waited it out. Definitely not as bad as hail or flooding!

Thinking we were finally in the clear (and with a decent, albeit chilly forecast), we set out to the mountains. We got set up with our first boondocking spot in Fort Stanton -- Snowy River Cave National Conservation Area and were loving it! But after a few days of enjoying breathtaking views and beautiful trails in solitude, we had to leave our little piece of heaven early. 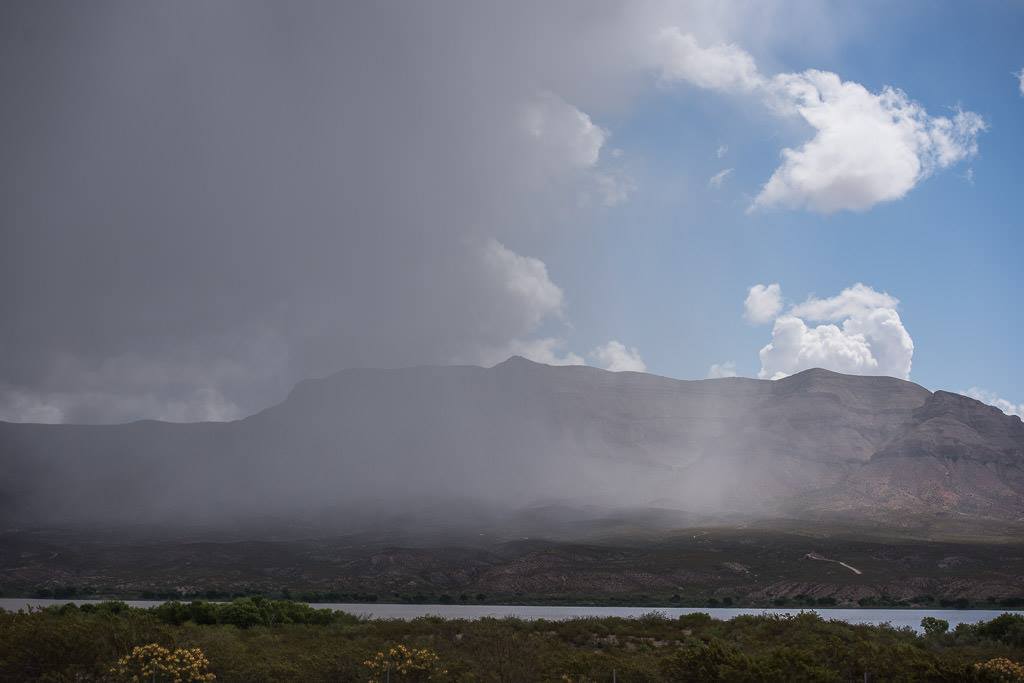 The cold front coming toward us was now bringing freezing temperatures, high winds, and snow. Not this time, Mother Nature! We made it out in time and found a great place further south with no snow in the forecast to ride out the cold front.

As much as we try to, we can't fully avoid inclement weather. Although we now check the forecast religiously, sometimes a storm will roll in without warning. It is great to have the flexibility to pack up and drive away if needed, but that won't always be an option.

In order to be better prepared, we have done lots of research on what to do in case of bad weather. And this is definitely something every RVer should do BEFORE taking to the road. Trust us, you don't want to be looking up the answer once the warning is blasted across your phone.

It is also a good idea to know what type of weather is typical in the areas you are traveling to. We knew New Mexico was known for wind, so we looked up how to handle high winds in an RV (basically just stop driving until it dies down). And had I known San Marcos was part of the "Flash Flood Alley" of Texas, I wouldn't have even considered this option with rain in the forecast!

But the most important thing we've learned is to just embrace these moments as part of the adventure. It may be scary or stressful while it is happening, but it is a colorful and interesting part of the story you are creating! And sometimes it can even lead you to wonderful, unexpected places or allow you to build new friendships.

Make safe decisions, be prepared in case of disaster, but don't let the fear of what could happen keep you from the amazing possibilities out on the road.