In the past five years, we've put 80,000 miles on two Sprinter-based Winnebago Navions that have touched all four corners of the United States, including a few crossings into both Canada and Mexico. We chose the Navion for two key reasons. The first is that it was super simple to drive and not particularly intimidating. The second was the more clean, modern, Euro-inspired interior design.

When I first saw the conceptual mock-up of the Horizon, I was intrigued. Three years later, when my wife Terry and I saw the first production models, we both agreed that this was the first Class A motorhome we would consider. We simply like modern design. That's what sings to us. And if the Horizon were a soundtrack, it would be either a warm jazz combo in a New York club, or a soft Bossa Nova on a warm Miami night.

Getting in the driver's seat

But for all of its interior sleekness, the Horizon is a diesel pusher. A big, long, and wide conveyance that from one moment took my thoughts from sublime mobile living to terrifying highway traffic anxiety. So let's get this over with -- I'm tearing up my "macho" card and freely confessing that driving a big rig is intimidating. That's one of the top reasons we bought the nimble, shorter, skinnier, and easy-to-drive Navion. Yet even at that, there was some adjustment. I vividly remember the drive home from the dealer with our first Navion where I white knuckled our brand-new purchase twenty miles from back to our storage garage. However, by the end of our first 6,000-mile trip in the Navion, Terry and I felt very comfortable driving it and now don't even give its size a second thought.

Still, as we drove up to the Junction City plant, I really was dreading having to muscle a big motorhome south for one thousand miles of both freeway and Californian urban traffic. To psych myself up for the journey ahead, I would remind myself that many others have stepped up (literally five steps) and gotten behind the wheel. At least a few years earlier I had received a lesson from the Winnebago pro, Paul Smith, as he calmly talked both Terry and I down the quiet rural country roads around Forest City behind the wheel of a Grand Tour. But for the upcoming trip, there would be no Paul reassuringly next to me. 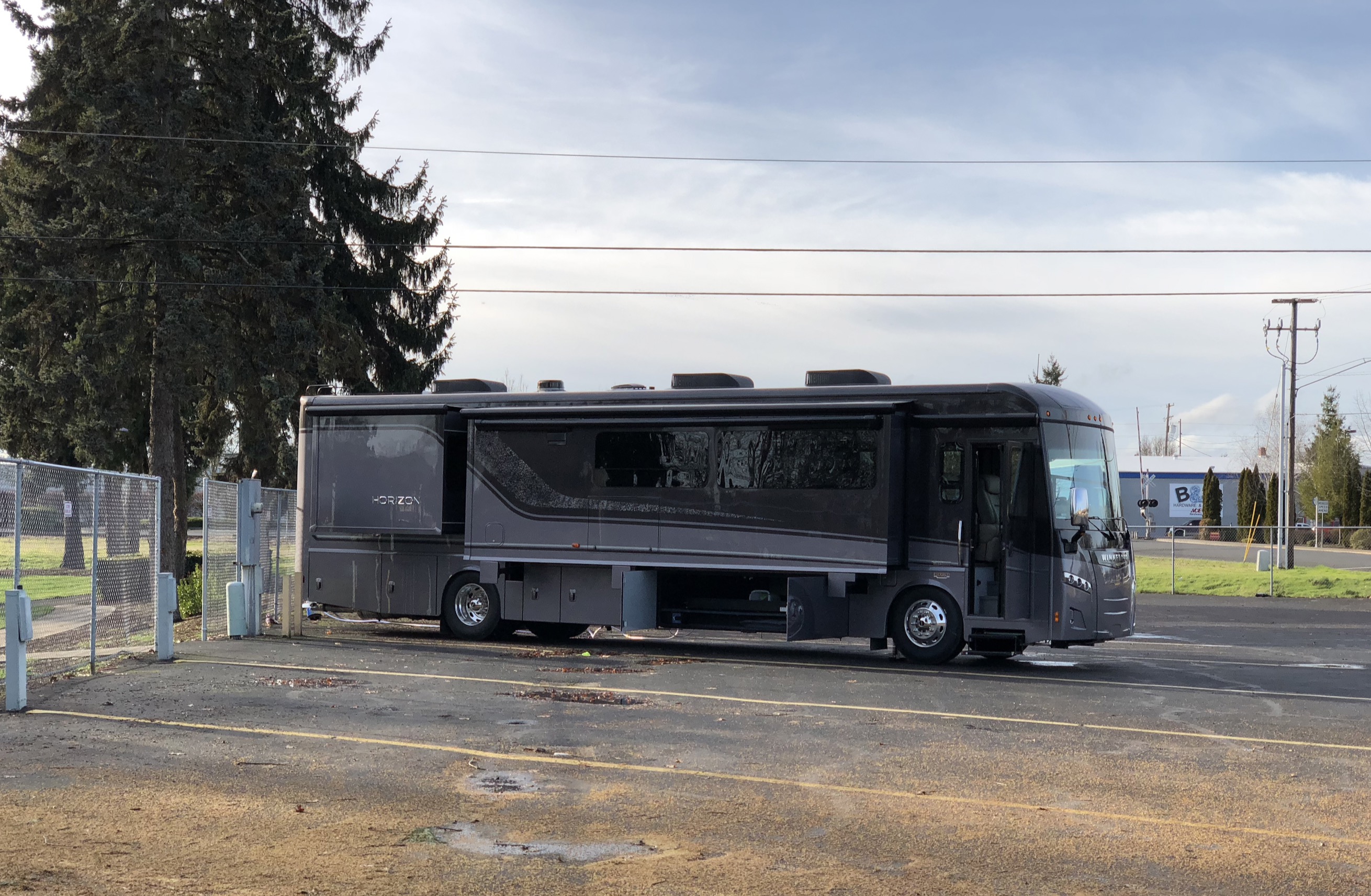 Night #1 a block from Winnebago's Junction City, Oregon plant. A perfect back-in with the help of the rear video camera.

After a full orientation on the coach at the Junction City, Oregon plant, provided by the lead foreman who was involved in its construction, there were hugs and handshakes and then the solitary tension trending toward dread that I was going to have to get this puppy out onto the street, down to the Safeway to fill up on diesel, and back to our first overnight campsite across a park from customer service. Alone in the big lot next to the factory I gingerly reversed away from the building and then, pushing the transmission button to drive, I slowly started tracing figure eights in the lot to get a sense of the size and steering wheel feel. By the third circuit, I was both shocked and pleased that all that time behind the wheel of the Navion had surprisingly prepared me for the next step up in scale. It was much easier and far less tense than I had anticipated.

With confidence slowly seeping inwards, I pointed the Horizon out to the main highway that goes through Junction City and a mile north to the Safeway for fuel. It was not a simple drive-through truck stop. I could see that I would have to pull into the station and circle around to get to the diesel pump, not unlike pulling in with our Navion and tow car attached. Not too bad.

When we drove back to the guest hook-ups I was now confronted with having to back into the space. Terry jumped out, as she always does, to direct me in my side mirror. While she stayed in my sights, the backup camera appeared on the 10.5-inch Xite display screen and I shocked Terry by deftly backing into the hook-ups without any adjustment. 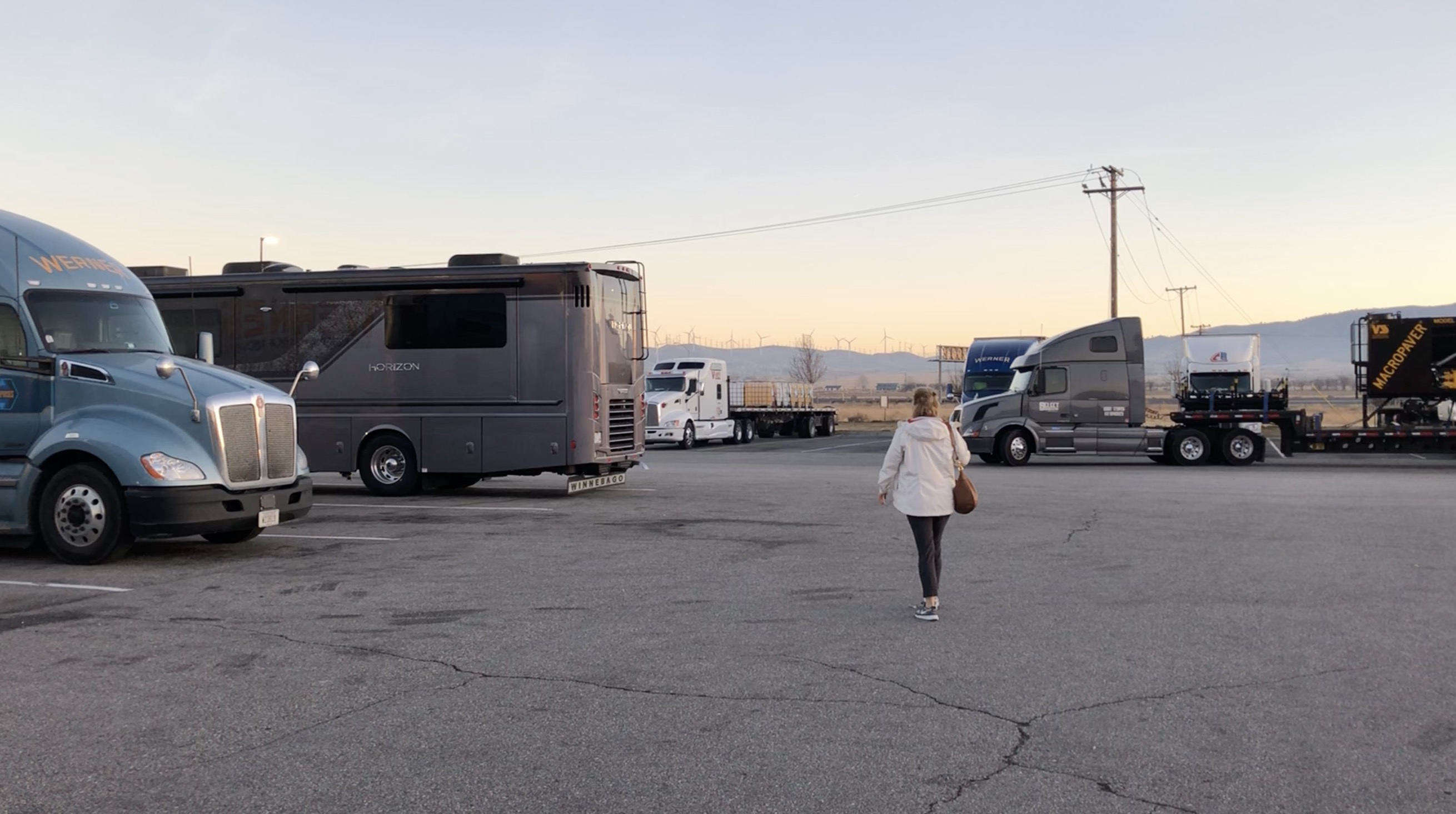 In trucker territory. Big rig friends suggest getting credit cards with the truck fueling chains like Pilot and Flying J for discounted fuel and pay-at-the-pump convenience.

Differences in big-rig vs. small-rig driving

Driving a big rig, there are several things you immediately sense that are different. The first is the high and wide panoramic view. Actually, this has a lot less to do with scenery watching for the driver as it does simply seeing lane lines and traffic. Perhaps it was the 80,000 miles of Navion driving, but there was no typical car reflex to look for a rear-view mirror. And frankly, all your focus is what's in front or on the sides of you. Let's just say that I'm not aware of any stories about an RV being rear ended! You also notice a different dynamic in turning as you're essentially sitting over the front wheels. That gives you a surprising sense of maneuverability. The final driving difference is steering wheel orientation. It's more horizontal and "bus-like." And while comfortable, it's a decidedly different experience, though one that didn't require much adjustment.

Now if you're currently a Class A gas owner, the transition will be even easier. You're already used to the same width and height, so that won't even be a hurdle. What you'll immediately notice is a smoother, quieter, and more powerful ride in a pusher. So at this point, you can be excused from reading further. As for the rest of you newbies or small rig readers, keep your seat belts on. 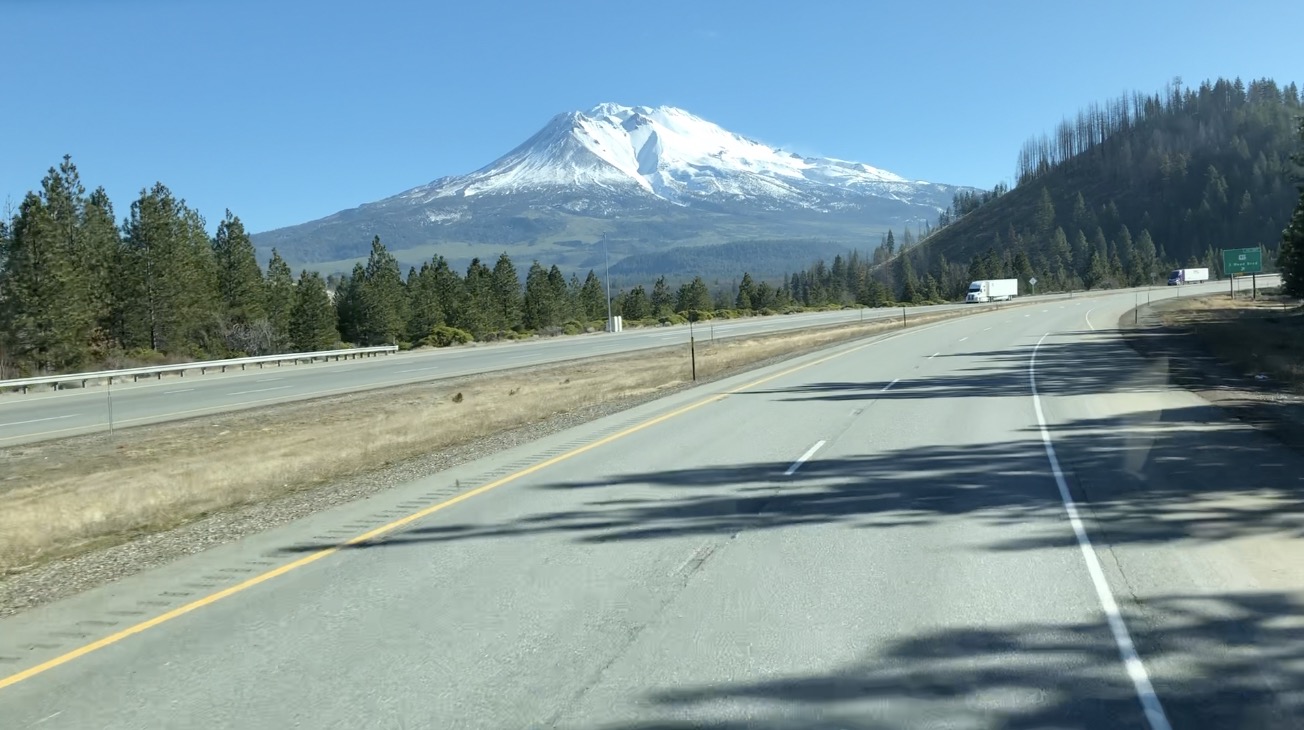 A panoramic view from a huge windshield. The up and down grades on I-5 were a great way to learn about engine braking, which is as easy as flipping a rocker switch.

In our trip from Oregon to California, I made sure I would stay on major arterials and fuel up at truck stops. In our smaller Navion, we could easily pick almost any gas station and pull u-turns on many streets. Not so with a diesel pusher. But the good news here is that if a semi can do it - so can you. There were times that I actually felt the 41-foot Horizon (we weren't towing) seemed "small" when navigating through a truck stop.

Prior to our thousand mile trip I pointedly questioned my big-rig friends about their driving experience. And what they told me seemed very consistent with my own experience. These vehicles are easy to drive, but they require more focused attention on the road than cars or smaller RVs. You find yourself constantly tending to lane placement and scanning mirrors and traffic ahead - especially in higher traffic urban areas. The general consensus of large coach drivers I've talked to seemed about right: you can do 350-400 miles a day comfortably. In our Navion (and in past car driving trips) I always figured that 500 miles was easy and 600 was doable. I think most people would feel pretty beat up driving a big rig that far in a day. And though a full tank of diesel can last you for 500-600 miles, you definitely change your mindset about where rest stops and truck stops are to take a short breather. 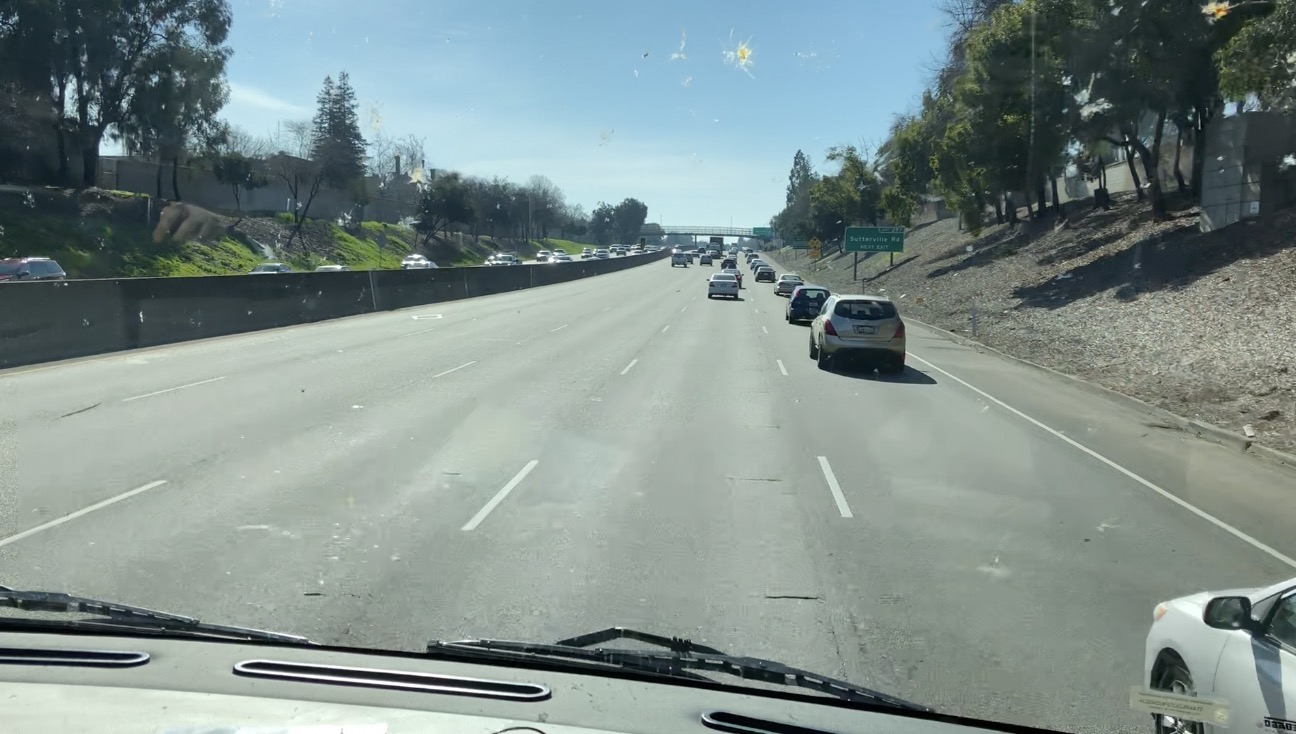 Stay in your lane and traffic will sort itself out around you.

For me, I never felt very tense during driving, but I did feel that there was a higher level of intensity in paying close attention. There were a few spots, most notably a three-lane street in Sacramento where there was a lot of traffic and the lanes were much skinnier. There were cars and a delivery truck or two on each side. Intellectually, I knew we were less than a foot apart with no room for maneuvering. I'm sure I gripped the wheel a bit harder and deeply, deeply focused on staying right in my lane. I just kept myself where I needed to be and everyone else could sort it out around me, but I became more relaxed when I could merge onto a freeway and wider lanes.

Now you may laugh (or cringe), but a surprisingly large number of RV buyers don't actually test drive an RV. Their first experience is driving off the dealer's lot. That's intimidating enough for even first time B and C drivers. And when you step up into a bigger Class A, the pucker factor can really kick in.

The need for a special driver's license can vary from state to state. Some states require a version of a CDL (commercial driver's license) based on driving a vehicle over 26,000 pounds GVW. Check your state's regulations carefully. �While the weight requirement in my state of Colorado is 26,001 GVW for a Class B license, a paragraph later it states that "Recreational vehicles such as a motorhome" are exempt.

If you feel you want to build your confidence and skills, you may want to research various RV driving schools on the Internet. Class costs range from $250 to $600. Also, don't be afraid to ask a dealer for a test drive and a quick lesson. They do it all the time and it's a common request. Good RV sales reps have plenty of driving experience, which they'll be happy to share with you. Nothing's better than a big parking lot to get the feel of the rig (brings back memories of my high school driver's ed class). Once you get a little parking lot confidence, you'll find that most dealers are on the outskirts of major metro areas, so there's usually quieter roads nearby to test drive on.

So boys and girls, I've done it and you can too - especially the gals (I've met a lot of women big rig drivers over the past few years). I'm guessing it won't be half as intimidating as that first time many of us, as teenagers, learned to drive. Like most things, the idea is much scarier that the actual reality.

Read more about the Winnebago Horizon in this detailed review.