In the past year, our e-Bikes have traveled with us on all our RV adventures. On several occasions, we've even decided to leave our Ford Focus tow car behind knowing that our bikes were perfect for some short trips.

Recently, for a mountain weekend getaway, we loaded the bikes onto the back of the car and hitched it to the Navion for a mixture of drive and bike adventure. It had been nearly thirty years since we had been to arguably the most photographed mountains in Colorado, the Maroon Bells. There is a well-paved road that goes up to the Bells parking lot, but over the decades the area has become so "loved" by tourists, the Forest Service closes the road in summer for the better part of the day and visitors take shuttle buses or ride their bikes to the lake and view of the mountains.

It was a perfect plan. We paid five bucks to park at the Aspen Highlands ski area parking structure, unloaded the bikes, hopped on, and start pedaling up the quiet road on a typically beautiful Colorado morning. 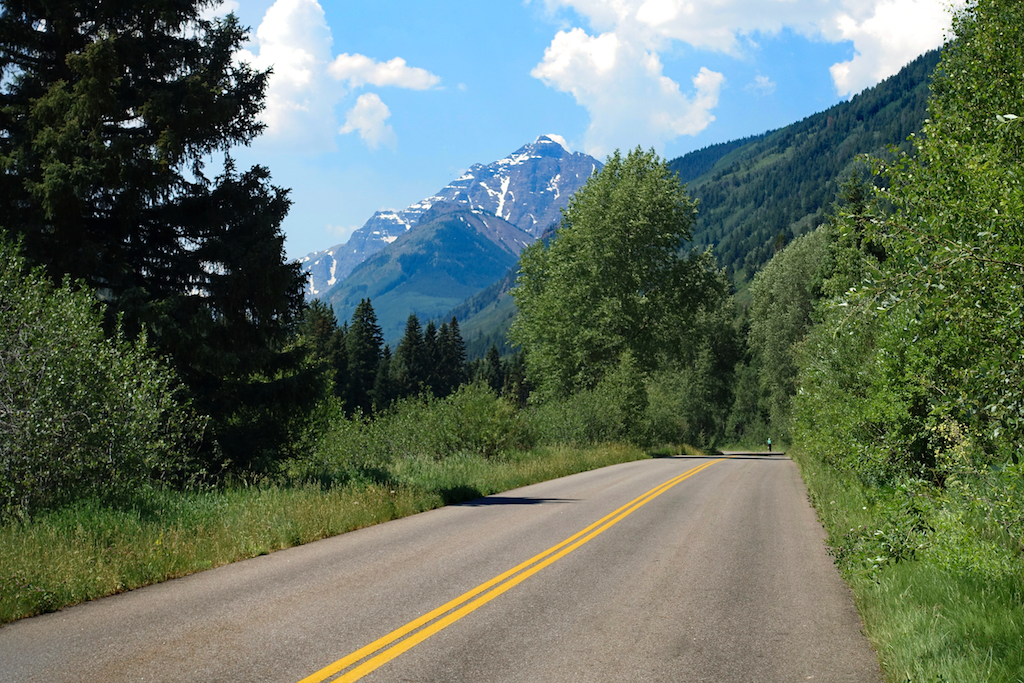 Pyramid Peak is one of Colorado's more dramatic 14,000' foot mountains. Just around the bend are the oft-photographed Maroon Bells.

It's here that an e-bike is a true joy. With the insistent uphill grade of the road, our legs were working, to be sure, but progress and altitude were quicker and easier. As we arced around a slight bend I could see the ranger checkpoint where cars, but not the shuttles or bikes, would be turned back.

As we approached, a very personable young ranger stepped out of the entrance station. "Hi there," he said with a smile. "Are those e-bikes?"

"Yes, they are," I responded proudly.

With a sympathetic smile, he said, "I'm sorry they're not allowed up the road." Looking at my wife I could tell we both were on the edge of having a nasty "you've got to be kidding" moment but realized that this nice young guy was merely a messenger. To soften the letdown he helpfully suggested we consider riding our bikes up Castle Creek which was one drainage over.

Needless to say, as the city bus-sized shuttle drove by, and other cyclists on regular bikes pumped past, the hypocrisy of banning a silent, non-polluting, human assisted bike (the motor only assists when you pedal, it's doesn't throttle on its own) -- was government overreach at its finest.

And let's not simply call out the Feds, local and state municipalities are often equally as arbitrary. The problem is that technology has gotten way out in front of public policy. It's simply easier and more expedient to leave the typical "No Motorized Vehicles" signs in place because elected officials and regulatory policy makers really don't want to mess with splitting hairs. 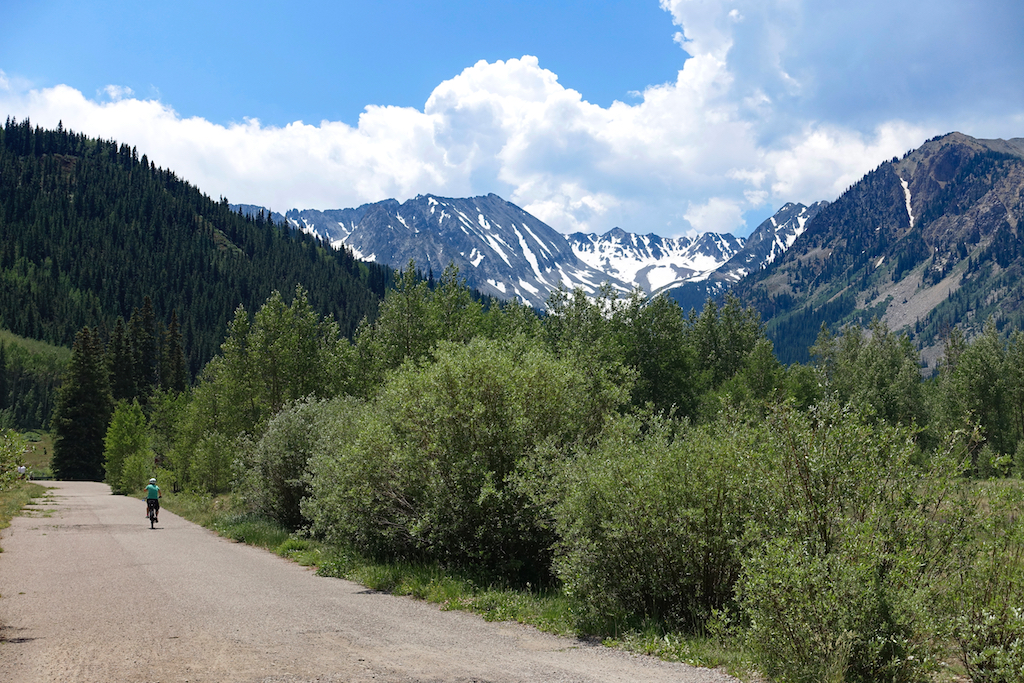 Our "consolation ride" up Castle Creek out of Aspen, along with a fine dining lunch at the remote Pine Creek Cookhouse, helped ease our frustration of the morning.

I was having a conversation with a fellow Winnebago (View) owner at our storage garage recently who was asking me about our e-bikes. He and his wife were recently in Europe and his first-hand experience mirrored what I've been reading a lot about over the past year -- e-bikes are everywhere in Europe. Here, in the states - not so much, but sales are growing.

Without any direct observation, policy makers mistakenly believe that e-bikes are powerful and can dominate on a bike path. Many of the paths we ride on have 15-20 MPH posted limits and though I could push hard on the pedals to get up to over 20, I don't. However, that doesn't stop spandex wrapped bikers from passing me at higher speeds on those paths.

In 2015 California governor, Jerry Brown signed a bill that permits Class 1 and 2 bikes to go wherever regular bikes go. Class 3 bikes have very modest restrictions that require the rider to wear a helmet (though EVERYBODY who rides should) and designates roadways, bike paths, trails and bikeways adjacent to roadways as acceptable. The California law respects that local governments may want to impose their own limitation (as we saw in Monterrey).

Local governments, like some Colorado mountain towns, are struggling with how to treat e-bikes. These are expensive bikes (and will be in the foreseeable future) costing from $2,000 to $6,000+. Based on price alone, that'll keep the universe of riders smaller. On today's highways, we have gas, hybrid and all-electric cars. All of them are allowed to use any road or highway, but all of them are subject to speed limits, traffic regulations, and pedestrian right-of-way.

Years ago ski resorts banned snowboarders. Many of the similar arguments about the safety and irresponsibility of snowboarders were raised. "They just don't mix" was a common belief that held sway for years. Well, now we know that they co-exist just fine. And we know while the vast majority of skiers and riders are responsible on the slopes, there are two-plankers and shredders who are reckless idiots. And this observation also applies to cyclists on regular bikes who heedlessly ignore traffic laws.

The e-bike revolution opens up access and opportunity for many people who, through age or physical conditioning, want to enjoy exercise and be outdoors. That's positive, healthy activity that we should encourage, not restrict.