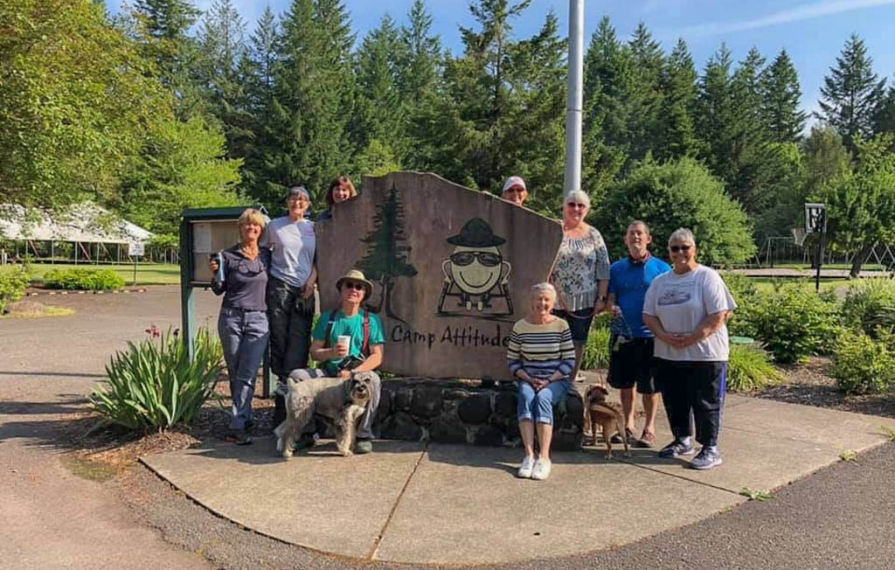 On May 26, a number of Travatos and their owners descended on Camp Attitude. The purpose of this meetup was to volunteer our services to the camp to prepare it for summer campers and their families. Camp Attitude is a faith-based, non-denominational, summer camp for special needs children. It is located off Route 20 in Foster, Oregon, just east of Sweet Home, and surrounded by a lush forest. The camp is large and beautifully laid out with cabins, yurts, trails, a pond, pavilion, and other buildings.

At this meetup, we had eight Travatos and one fifth wheel belonging to a friend of one of the Travato owners for a total of ten people. We also had five fun dogs in attendance. The weather was beautiful and the air crisp and clean.

This meetup was organized by Gail Blundell, a Travato owner who loves to travel around doing volunteer work. She also organized a Camp Attitude meetup the year before. Gail, a former wildlife researcher and veterinary technician from Alaska, who also holds a Ph.D. in wildlife biology, believes strongly in giving back in the form of volunteering. She is very active with RV Care-A-Vanners, a division of Habitat For Humanity, through which RVers travel to build sites. Gail has been on many Habitat For Humanity builds and you can tell she really loves doing them. She is also an avid hiker, biker, and kayaker. 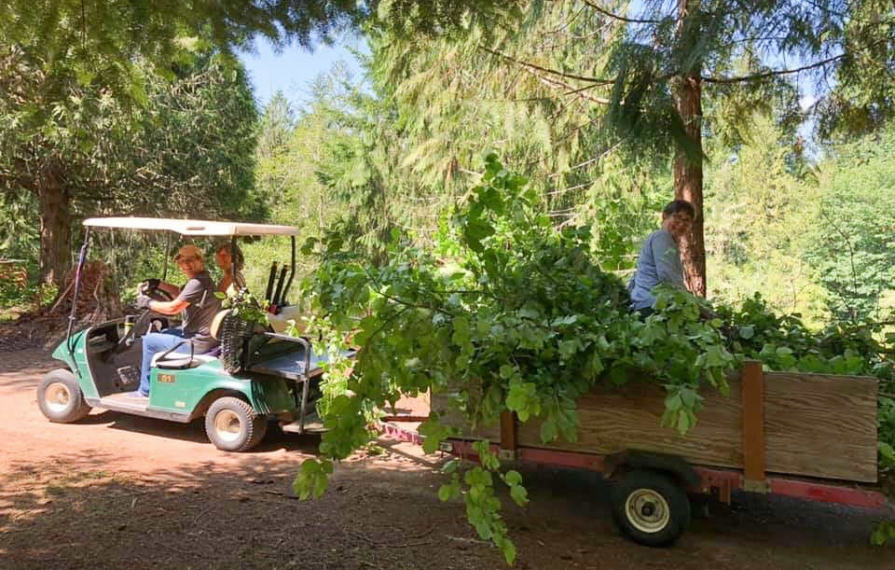 A Day in the Life of a Camp Attitude Volunteer

Each morning, we were given assignments by Bill, the camp caretaker. The work consisted of cleaning the cabins and yurts, restrooms, infirmary and staff quarters. We painted, power washed, and cleaned gutters.

One crew spent several days tackling the overgrowth on trails, while others pruned and trimmed trees and flowers. For a couple of days, Gail was a beast with a weed wacker, trimming the dense overgrowth around the pond.

Each night, we gathered for a chat and refreshments, then dinner, eventually falling into bed exhausted from the day's chores. But it was a good kind of tired. Some days we ended a bit earlier, but each day was filled with getting things done so the campers could enjoy their stay.

However, it wasn't all work. One afternoon, near the end of the week, several of us went to Foster Lake. Three people brought their kayaks. Even two of the dogs went kayaking! Another night, there was a potluck and the final night we had delicious calzones delivered from the local pizza place. 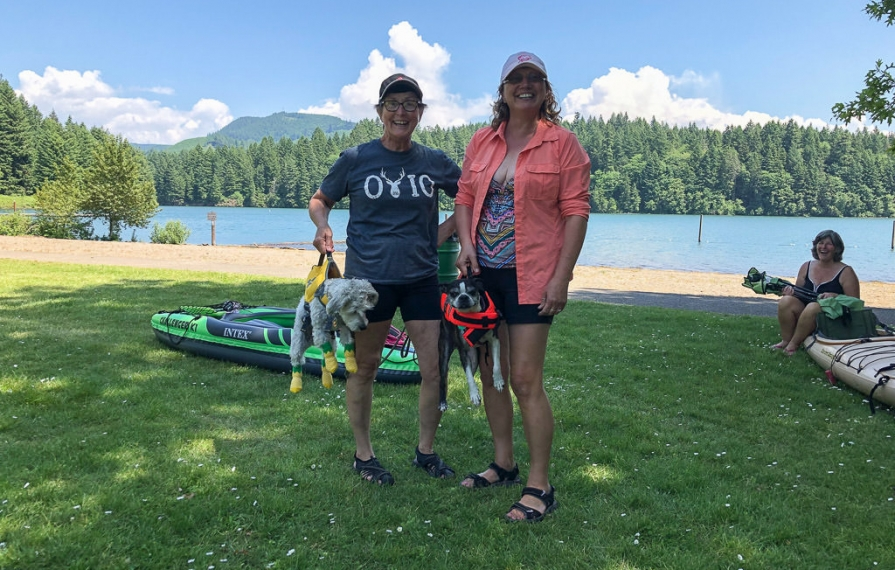 "It was an honor to be able to spend time with awesome people in beautiful surroundings, doing work for such a worthy cause." -- Heather Shaw

While at Camp Attitude, I sat down with Tim Walusiak, a board member, and asked him about the camp and its program. Camp Attitude was founded in 1998 to provide access to camping for special needs children. The first camp season was held in 2000.

It is free to the campers and their families, and applicants are vetted and receive background checks. Campers are children with a wide range of disabilities, including brittle bone disease, Down Syndrome, autism, spina bifida, and others. There are also paraplegic and quadriplegic campers. The kids get a real camping experience, including a talent show, crafts, water sports, horses, and campfires. They are allowed to do whatever their parents agree to let them experience. 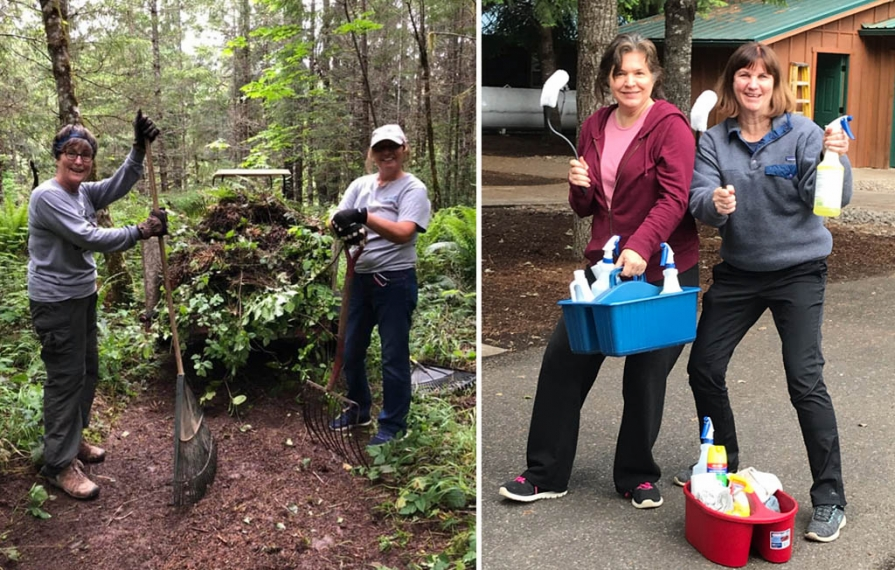 "It was rewarding and fulfilling! I felt like for the first time I've given back to the community for a group of people that needed our help!" -- Kathy Carson

The children come to camp with their families or with a caregiver. A couple of families may share a cabin or yurt. The cabins are large double cabins with several sets of bunk beds, a fridge, microwave, and accessible bathroom and showers. One thing I thought was especially nice is that during the week of camping, there are also programs for the parents and siblings. Camp Attitude is a whole family experience. Parents who have to give care round-the-clock can have time to themselves and can interact with other parents going through similar experiences. This is possible because each camper is assigned a "peer buddy." A buddy is a high school or college kid who volunteers at the camp. They are with the campers for all their activities.

"Although we don't get to see the camp in operation, it's rewarding to know that we are helping to facilitate the opening of a camp that does such wonderful things for special needs families." -- Gail Blundell

In addition to the buddies, other volunteers come during camping season to work at various jobs, such as in the kitchen and clean-up. Tim said sometimes entire families come to work at the camp as volunteers, using vacation time to teach their own children about giving back and service, as well as to expose them to others who are different. These volunteers pay for their time at camp to cover the expense of their food and other services. During the year, other groups and schools also volunteer, often in one-day "service day" events. 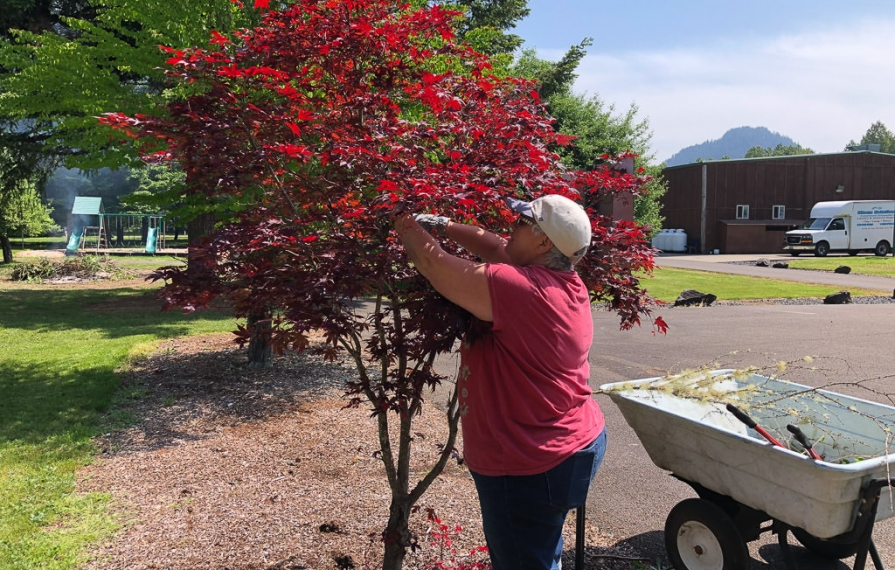 One of the things Tim stressed is the inclusiveness of the camp. Although it is a Christian faith-based camp, it is open to all, and over the years they have had many campers of various faiths. Their non-profit standing is not for religious purposes, but for education. Their purpose is to serve all challenged children who wish to have a camping experience. The camp is run on donations and sponsorships.

Sometimes, other groups book the camp during the off-season. After we left Camp Attitude, a group of campers comprised of challenged adults were coming for a few days. Following that, the 2019 camping season would officially open for the children.

There are seven RV sites with full hookups and five with electric and water at Camp Attitude. There is also space for dry camping should the need arise. During camping season, these RV sites are used by volunteers and by some of the campers' families. Off-season, when a group like the Travatos come in, there is no cost to use the RV sites since they are volunteering their services. Tim also mentioned that the RV sites are available for the occasional overnight during off-season. Because of their tax standing, they cannot charge for the stay, but would definitely trade some work time, or would take a donation. The caretaker resides on the property full-time and can assist with those requests. 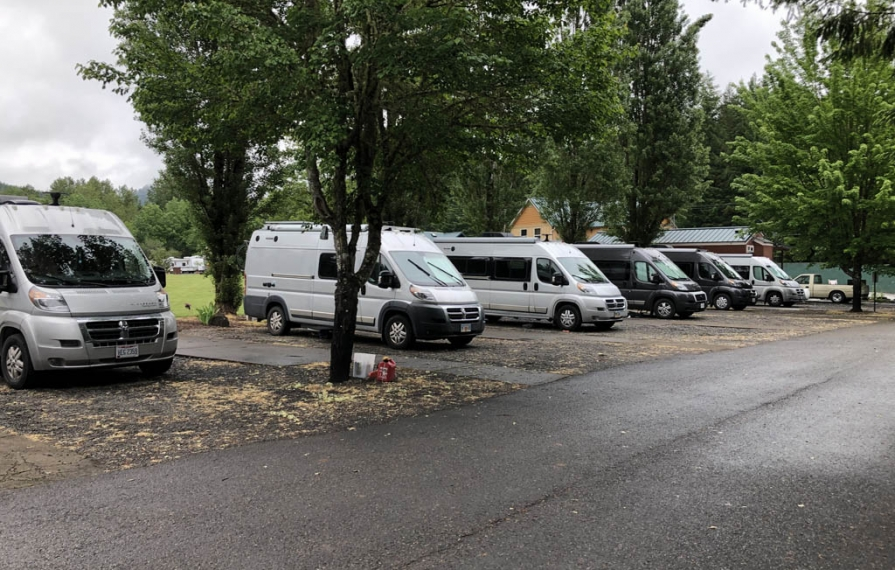 Join Us Next Year!

I loved my week at the camp, so much so that I am planning on returning next year. Gail isn't sure if she will be able to be there, so Lori Toland and I are hosting the 2020 volunteer week. It is scheduled to begin on May 17, 2020. It has been set up as a Travato event, but all are welcome. There are spaces for many RVs, both with and without hookups. If you would like to join us, please contact me.