Buckling Up Kids in an RV

Buckling Up Kids in an RV
By: Bryanna Royal

Hitting the road with your kids or grandkids sounds like a great adventure and an amazing family trip. Then you start looking at the logistics and realize that RVs aren't really made for kids' car seats.

Sure, back in the day, kids would just run around the RV and climb up on the beds and basically play while their parents or grandparents drove down the road. In this day and age, that is not what people do. There are many more people on the roads now. And with so much access to online media, you constantly see images of the bad things that can happen.

Don't worry, there is a solution -- or at least a way that we have figured out to make it work.

Please note: I am not a professional and nothing I share here has been approved by anyone official. This is just our journey through coming up with a solution, so we can travel full time with our young kids in a motorhome (not a truck and trailer). 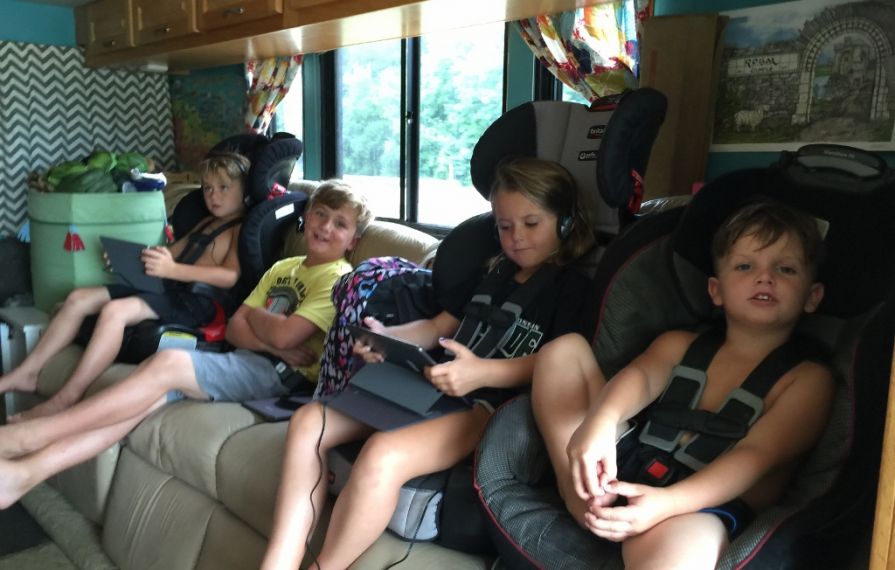 Prior to purchasing any of our motorhomes, one of the main criteria was that it had to come with enough seat belts for our whole family. In our case, that meant six. Yes, there are aftermarket ways you can get them installed. But we didn't want to deal with the hassle and felt much better going with a motorhome that had factory installed seat belts.

Take note: Just because a motorhome has a booth in it DOES NOT mean that there are four seat belts. There are times when a water tank is located under a seat or the manufacturer did not add a seat belt to each seat at the booth for another reason.

We originally had a large, 39-foot diesel pusher motorhome. In this case, we were one of the largest vehicles on the road, so we were okay with the kids' car seats sitting on the sideways facing couch -- as long as all the car seats could be buckled into a lap belt.

Is a lap belt the best bet for installing a car seat? No. Would we rather have a shoulder-strap car seat? Yes. Are there RVs with seats in the back with shoulder belts? No. This was our only option.

When we decided to downsize to a smaller rig -- a Class C, 23-foot Winnebago View -- we decided that we were no longer comfortable with the sideways facing couch, but instead wanted a table setup. This way two kids could face backward and two forward.

Choosing the car seat over a harness

When we downsized to the Class C, we thought about adding in a harness seat belt -- similar to a race car driver's seat belt. We went down this path and talked to one of the owners of a company that sells this kind of seat belt for people looking for an option other than a car seat.

He actually talked us out of buying his product and instead recommended we stick with the five-point harness car seats and the lap belt. After being a firefighter for many years, he saw a lot of reasons for car seat failure.

Here were his reasons:

1. You don't want to tether a belt down to the floor when it doesn't have the solid support of a car bucket seat behind it. He said it could have a negative impact if it were only connected with an RV bench seat (which is made of wood) behind it. The reason being, it could put added pressure on the child, since the seat is not strong enough.

2. Five-point harness car seats are safety tested with only a lap belt.

3. The majority of automobile accidents occur in residential areas. The fact that the RV was a larger vehicle on the road meant that it was more likely for someone to see it coming and in turn, less likely to get into an accident.

4. In a head-on collision or a rear-end accident that the kids being in a five-point harness in a forward or rear facing seat were going to be almost as safe as in a car with shoulder belts and tethers. Maybe even more so, since the RV is larger.

5. If you are in an accident on the highway -- no matter what you are driving -- the main goal is staying in the vehicle and not being thrown from it, he explained. With a five-point harness seat and a seat belt, you should be secure in the vehicle.

What about a child who is too big for a five-point harness car seat?

Our oldest is now too heavy for his car seat -- granted he is on the larger end of the scale, so your 9-year-old may still be within the range of a five-point harness car seat. This left us with a dilemma to figure out where he could sit.

After talking with the same gentleman mentioned above, we made the decision that our 9-year-old would ride in the front passenger seat. This meant he would have a shoulder belt. I (the Mom) would ride in the back at the booth with the kids with just a lap belt.

The reasoning for this is the more developed your pelvis area is, the safer it is with just a lap belt. Plus, I am taller than him, so the lap belt hits my body at a better place than his.

Is any of this the perfect solution? No. Can we hope RV manufacturers will start to seriously look at car seat safety in RVs and design models with this in mind? For sure! But for the time being, this situation is working for us and we feel comfortable with our kids riding in the RV in their five-point harness car seat if:

1. In a large motorhome, they have a lap belt holding the five-point harness car seat down.

2. In a smaller Class C, they are forward or backward facing with a lap belt holding the five-point harness car seat down.

3. They meet the weight and height restrictions of the five-point harness car seat.

4. We drive carefully and cautiously on the road and stay at 65 mph or under.

Here is a video of us putting the car seats into the Class A motorhome (it starts at 42 seconds): https://youtu.be/dGe4BXu9LYk

For more information about the five-point harness car seat that we have for our kids, click here. Be sure to read about the weight. This one is good in harness mode up to 90 pounds and 58 inches in height. It goes higher in booster mode, when the seat belt is used.