A Journey Through Beauty

This story ends at the base of the Lincoln Memorial, but it begins deep in a Colorado mountain near Yule Creek and about thirty miles as the crow flies from Aspen. For it's here that some of the purest marble in the world grudgingly yields its white crystalline gifts under the claw of hammers and drills. 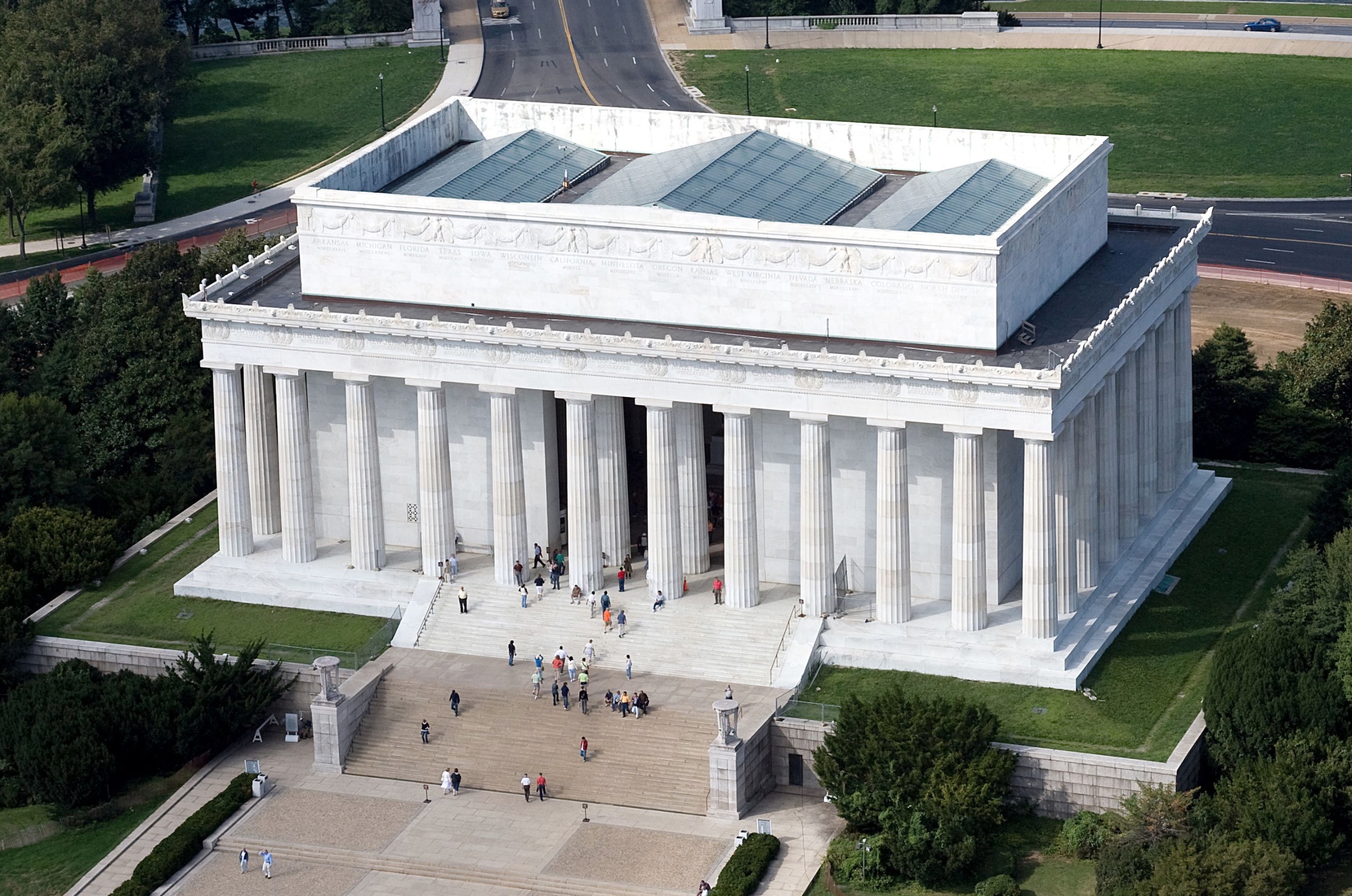 Colorado Yule Marble is perhaps Colorado's most visible, yet invisible export. It clads the facades of buildings across America, stands sentry as the columns around the Lincoln Memorial, and honors America's fallen at the Tomb of the Unknowns. It is prized for its purity with very little marbling. To the touch, its unpolished surface can feel like fine emery board and to a sculptor, it is far more resistant than clay, yet can be etched away by small chisels or whirring power tools. 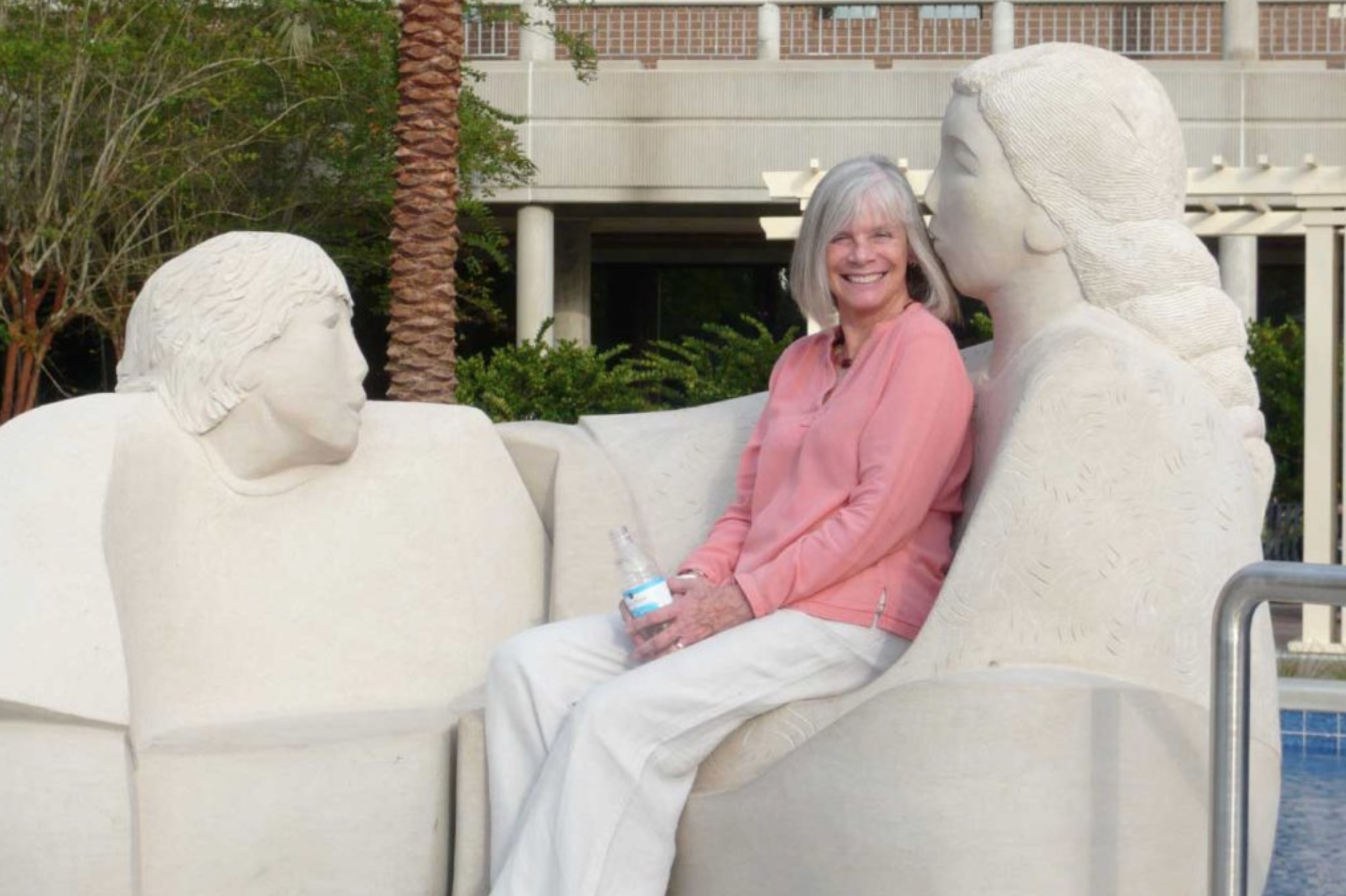 Madeline and one of her creations.

And to sculptor Madeline Wiener, it seemingly surrenders to the song and story of humanity that she sees within the square blocks in her studio. Decades ago Madeline left her home in New York City and came to Colorado. Already a young sculptor with growing success, she found a silent partner compressed, thirty-four million years ago, waiting for her about four hours away from her Denver home in a quarry just above a tiny town, appropriately named, Marble. 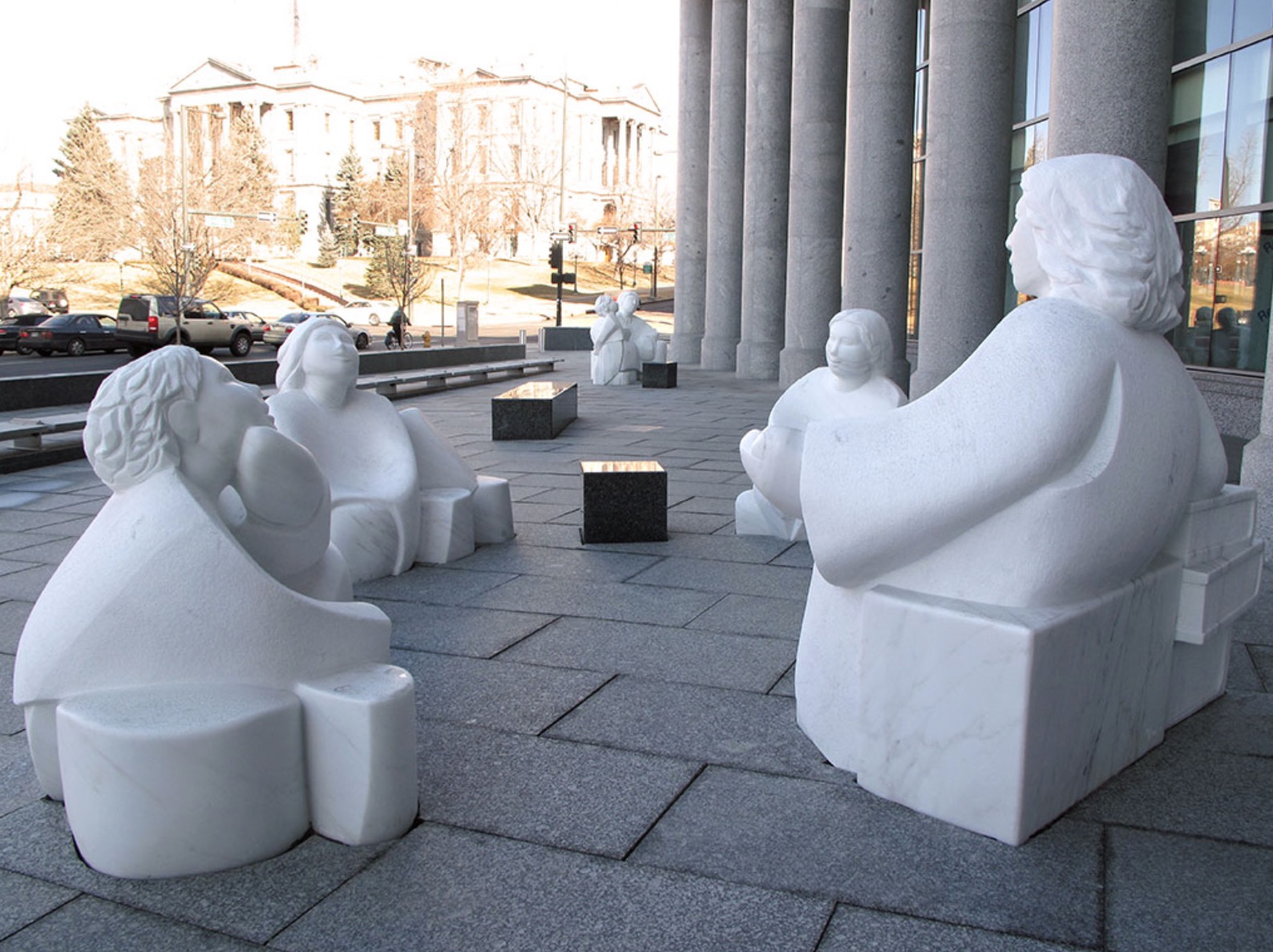 "Teaching the rule of law" to children in front of the Ralph L. Carr Colorado Judicial Center (State Supreme Court), next to the state capitol.

Madeline's sculptures are found in gardens, parks, private collections and in front of civic buildings across the country. Her figurative style speaks to the heart of the human soul and the connectivity of spirit. As round and substantial as her work is, her lithe frame is the opposite. But what she shares in common with many of her creations is a personal sense of joie de vivre. 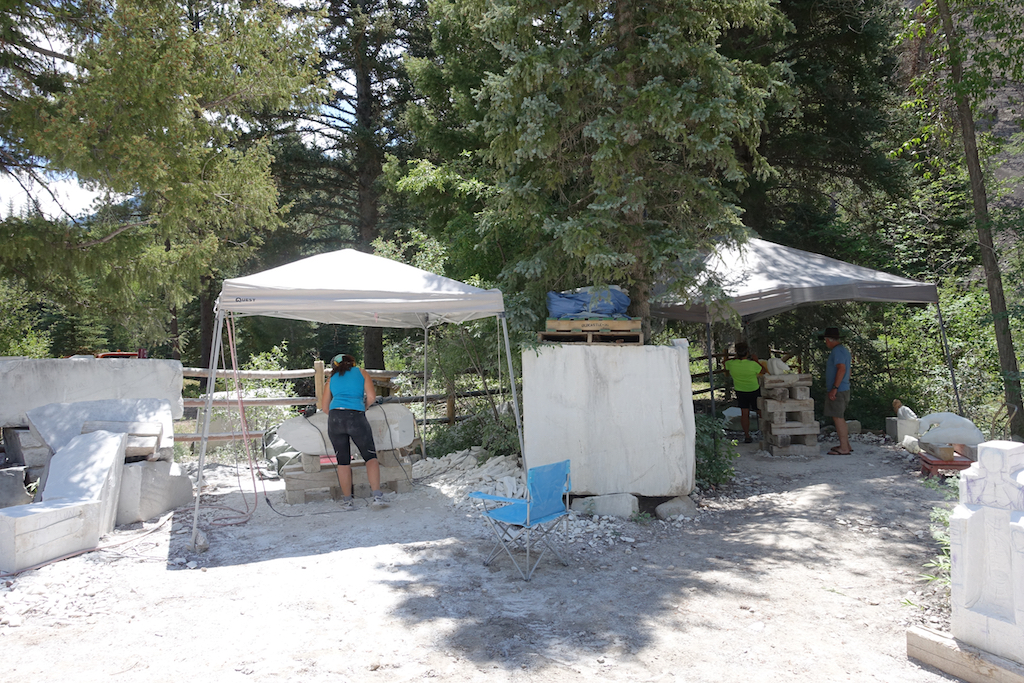 But Madeline Wiener shapes more than stone. She shapes lives. We found her walking through a warren of aspen trees just down the hill from the mostly summer home enclave of Marble. As she walked towards us there was a staccato symphony of hammered chisels against stone and the high octave whine of power grinders. We were standing in the heart of the Marble/Marble Symposium, now in its twenty-ninth year since Madeline founded it. 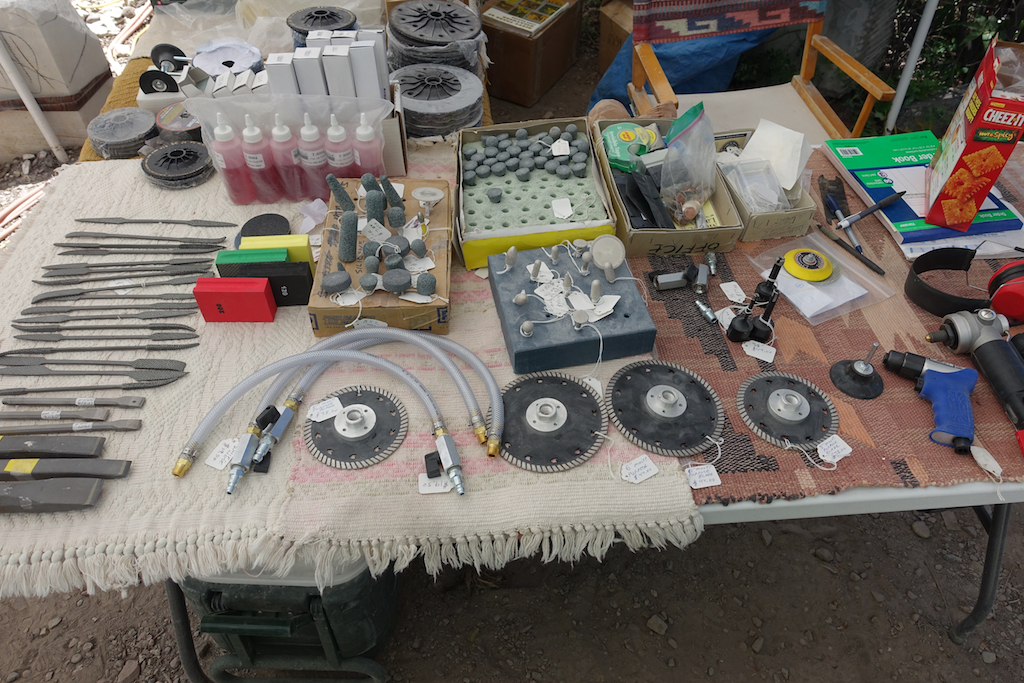 Tools of the trade. All free for anyone to use. 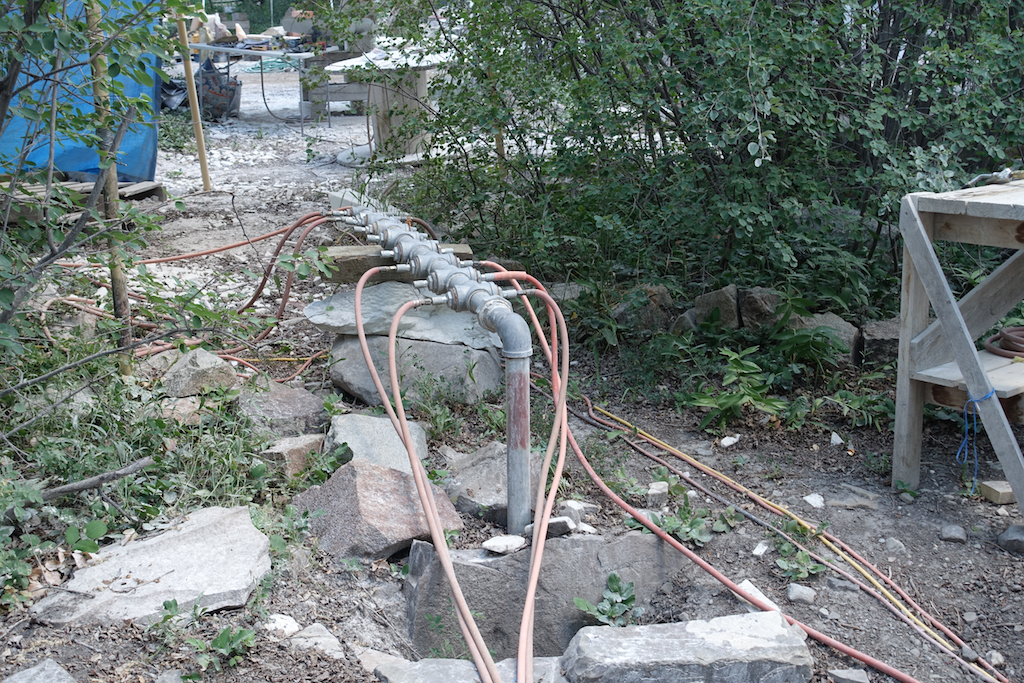 One of the huge air compressor manifolds to drive the whir and grind of sculpting tools.

During the summer there are three one week sessions that sculptors from all parts of the world sign up for. The $900 dollar tuition gives you a covered carving site, unlimited access to power tools, classes and workshops and, your very own three-cubic foot, five hundred pound chunk of Colorado Yule Marble. 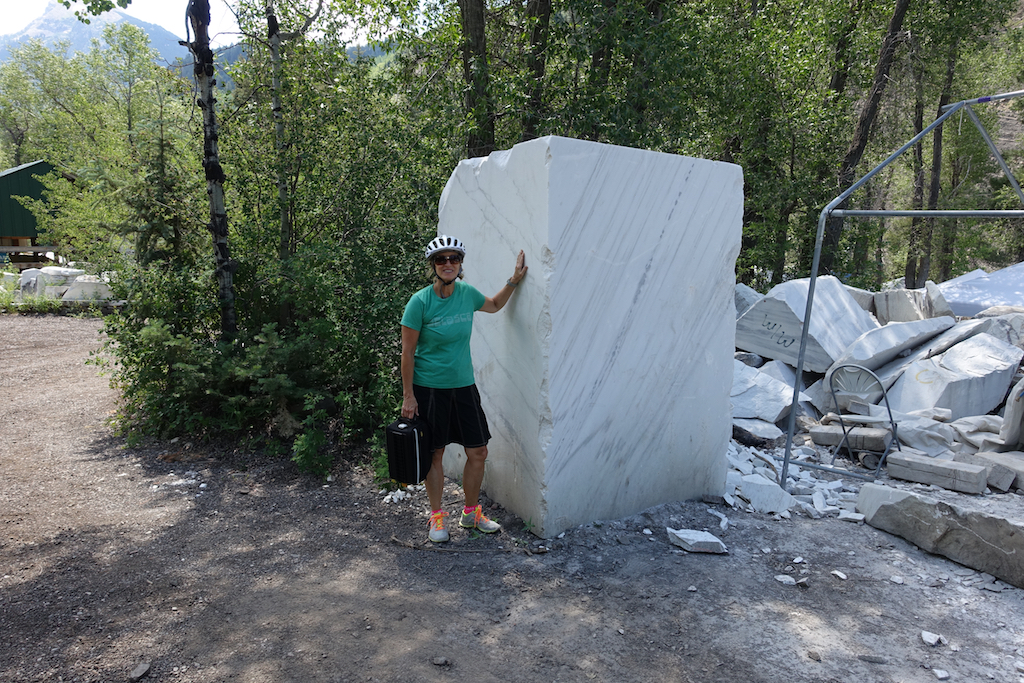 And what story is inside? Terry Cohen stands next to a typical huge block of marble from the nearby quarry.

We strolled alongside Madeline through a fascinating mash-up of artist workshop meets summer camp, all under a serenely blue Colorado summer sky. Strewn along the paths were chips and chunks of marble. Madeline introduced us to a recently retired dentist from Missouri. Marble sculpting has been a long time passion of his, and it was very evident that this was a craft he had a great mastery of. We smiled at how close his hobby was to his vocation. 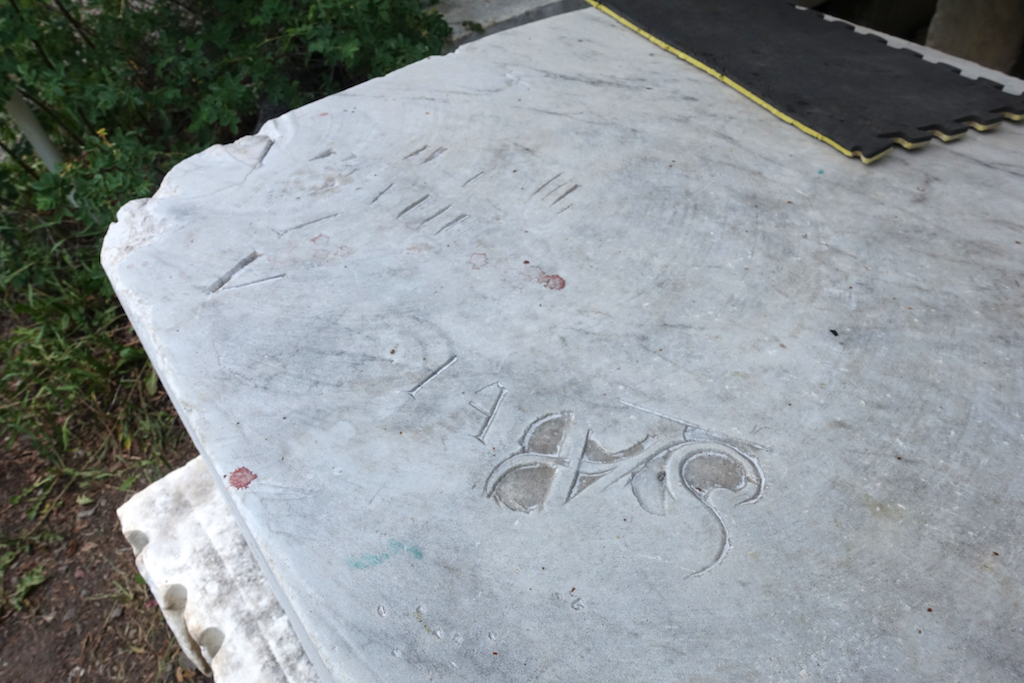 There was a quiet, but smiling young man from India who was here for the summer on a paid scholarship. India is known for its exotic stone quarries and thousands of years of sculptural art. And of course, one of the principal materials in the Taj Mahal is marble. 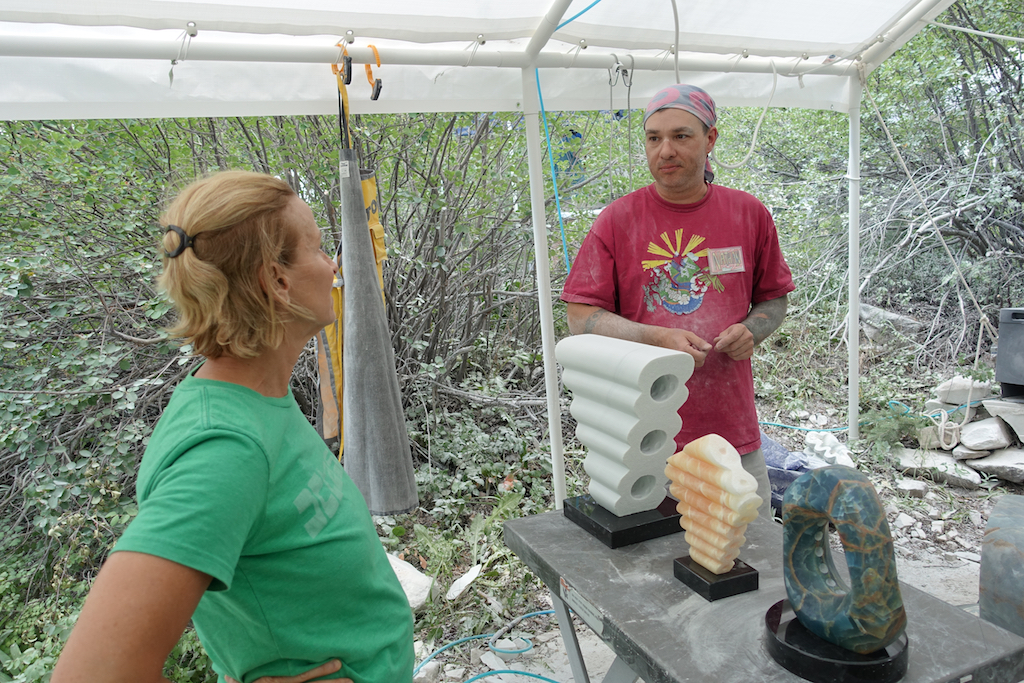 Another sculptor was an attorney, another also owned a candy shop where his hundred-year-old machine still cranks out ribbon candy. Under one tent some decidedly non-marble contemporary pieces caught our eye. Lifting his safety goggles up to his forehead, we shook the dusty hand of Nathan Slape, who is one of Madeline's multiple assistants and enjoys working in materials such as Argentinian onyx. 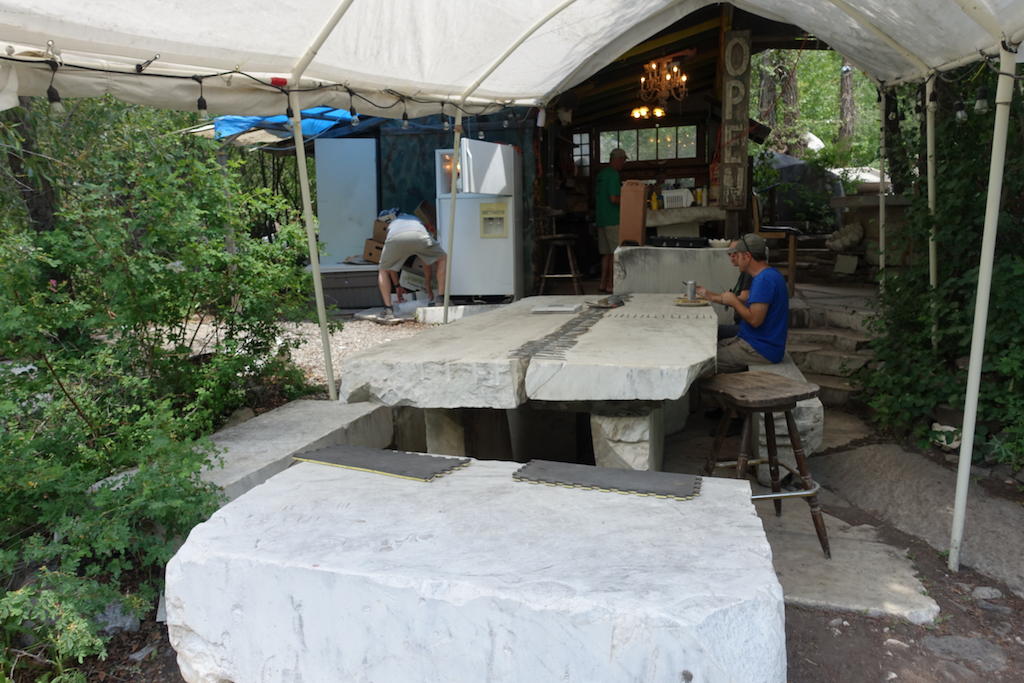 The outdoor dining hall, complete with a stapled together banquet-sized table.

Lunchtime was now overdue and Madeline escorted us to the tiered indoor-outdoor kitchen. The huge community table comprised two six inch thick marble slabs that had been simply "stapled" together. As if! Over sandwiches and water, we compared back stories only to find that in the early part of our adult lives we lived six blocks from each other. As Madeline told us more about her career and family and of significant challenges in her life, our admiration for her dedication in building the symposium, and her remarkable personal resilience, rose even higher than our deep appreciation for her artistry. 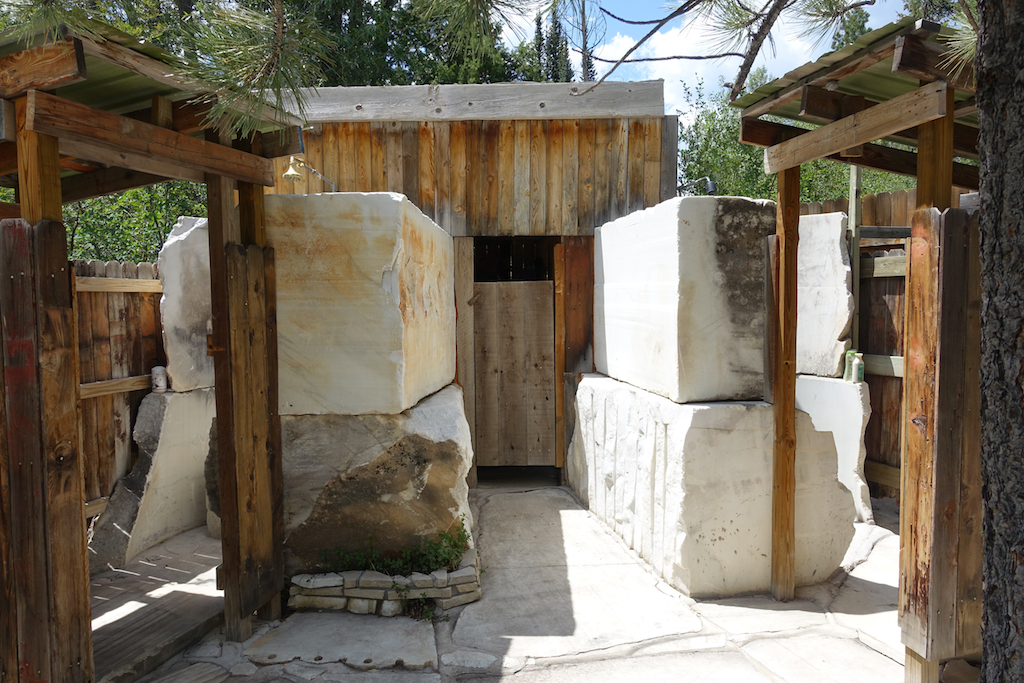 Way beyond tile - the entrance to the marble lined outdoor shower.

It was time to get on our bikes and pedal back downhill along the Crystal River where we have left our car at the town of Redstone.We hugged and said our farewells to Madeline, but also found ourselves circling back to Nathan's tent. What attracted us to his sculpting table was that beautiful blue ring of Argentinian onyx, and we knew exactly where that would be displayed in the living room. 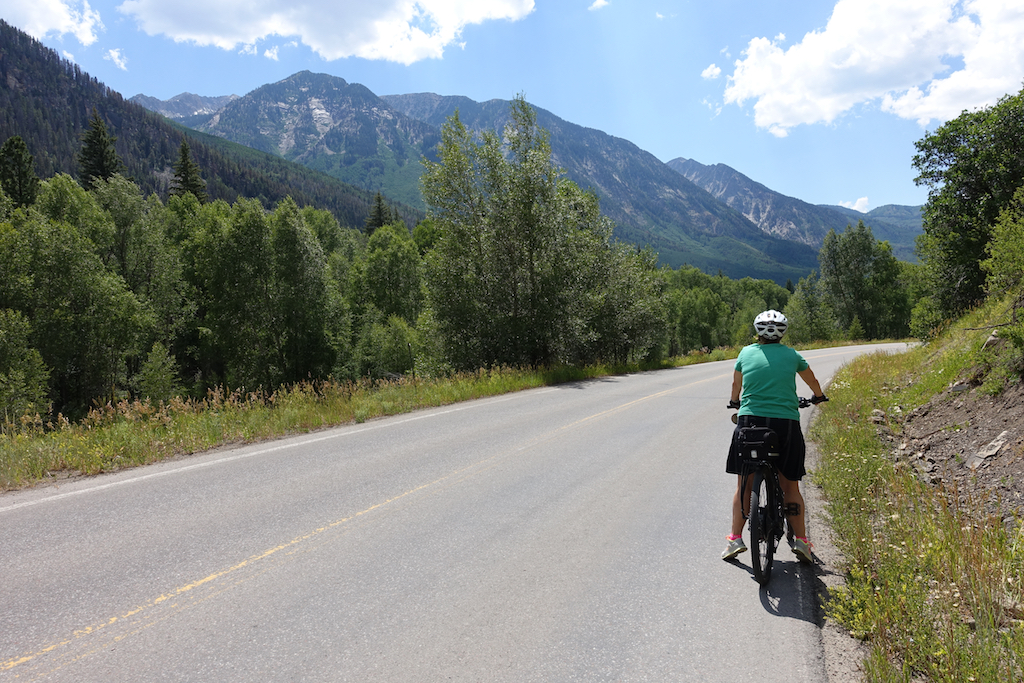 Above the Crystal River, Terry gets ready to ride from Marble back to the town of Redstone.

If a name could be given to the day, perhaps it would best be described as a "journey through beauty." To slow down and hike or bike through the heart of the Colorado Rockies pushes the wonder of nature deep into every pore. And then there's the unshaped beauty of snow white rock cut from a dark recess of a mountain and released into life by human imagination. And finally, there is the beauty of the human spirit, as seen through the passion and vision of Madeline Weiner, whose embrace of the beauty of life warms and inspires all who surround her.

And now for the RV part of the story. I had met Madeline at a meeting in Denver as she was introduced to me as part of a larger conversation our neighborhood is having about increasing public art. I was very impressed with her work and had long admired some of her commissions without ever knowing who the artist was. When she invited Terry and me up to Marble we thought it would be a great opportunity for a quick three-day RV trip.

RV camping options are hard to find in the Roaring Fork Valley (the 40-mile valley that runs south from I-70 from Glenwood Springs to Aspen. There are a variety of Forest Service campgrounds, but those are best suited for smaller towables, B-Vans and Compact Cs. The KOA in Carbondale is about a 5-7 minute drive west of town toward Redstone and is very nice, in a pretty location, and really hard to get a reservation at during the summer. Through Allstays we uncovered the town owned Gateway RV Park. While not as woodsy as the KOA, its location on the main bike trail, which runs between Glenwood and Aspen, was a big plus as we could ride our bikes into the town of Carbondale in about five minutes.

Despite a clash with a short-sighted public policy on e-bikes, we got a couple of nice bike rides in. From Carbondale, we drove to the historic town of Redstone, popped the bikes off the rack and rode up the highway to Marble. It's not too heavily trafficked and we often had the road to ourselves. It doesn't get much better riding along a clear alpine stream, trembling aspens, and snow slabbed high peaks.

I once interviewed a Skinnie Winnie owner who talked about how she and her husband would simply "gas and go" for quick trips. When you first start out traveling with an RV it always seems like there's always the long list and multiple steps involved to getting on the highway. But, over time, all of that smooths out and you get to a point where "it's no big deal" to fill up your tanks and head off to an ad hoc adventure. And just like this quick weekend was, it's that sense of spontaneity that runs common to many RVers' stories. It is certainly one of the most satisfying aspects of our #WinnebagoLife.