Hi all, in early December James and I made a trip to Kentucky where we attended the annual RVIA trade show in Louisville. 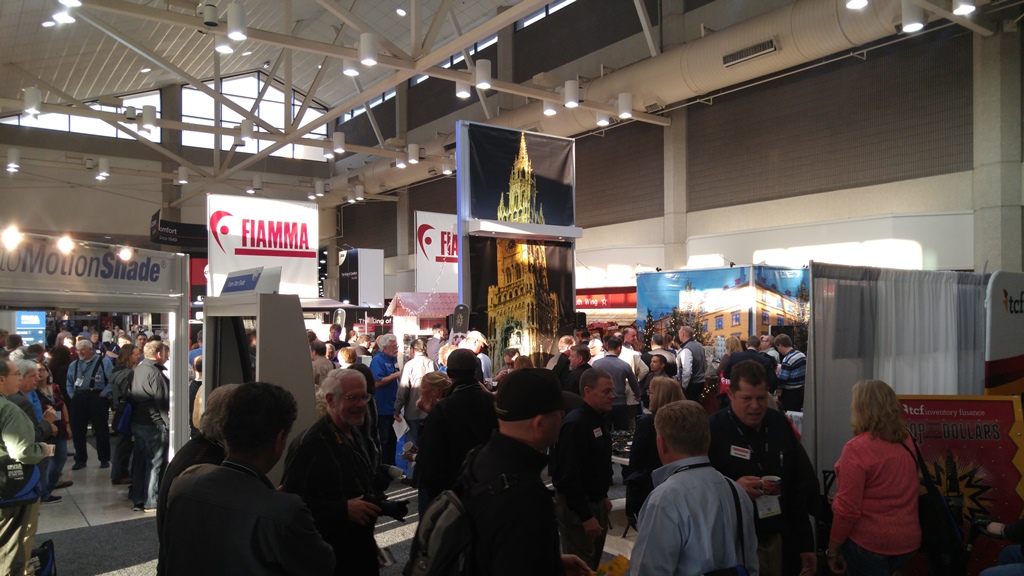 This is a significant show for the RV industry because it's where manufacturers like to roll out new models and updates to current ones. 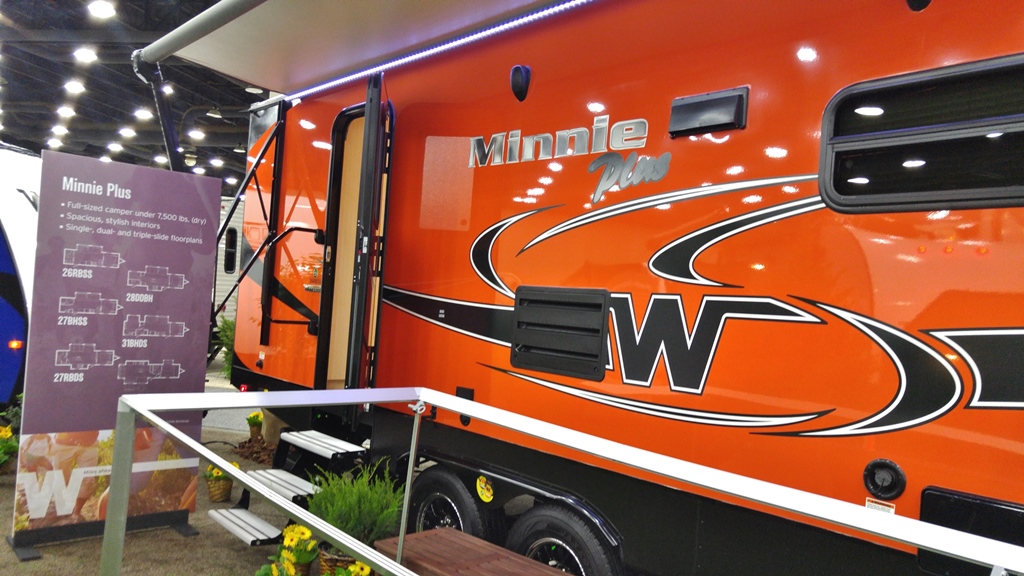 It's where we get to see what's hot and what's not in the RV world. It's an industry-only show though, so since the public couldn't attend, I'll try to give you a feel for some of the significant trends we saw.

The first thing we noticed is that the industry as a whole is paying much more attention to social media and increasing brand awareness. We heard this at the Truma-sponsored industry breakfast where the RVIA itself presented a video highlighting how Facebook and Twitter audiences have grown significantly on GoRVing's channels. 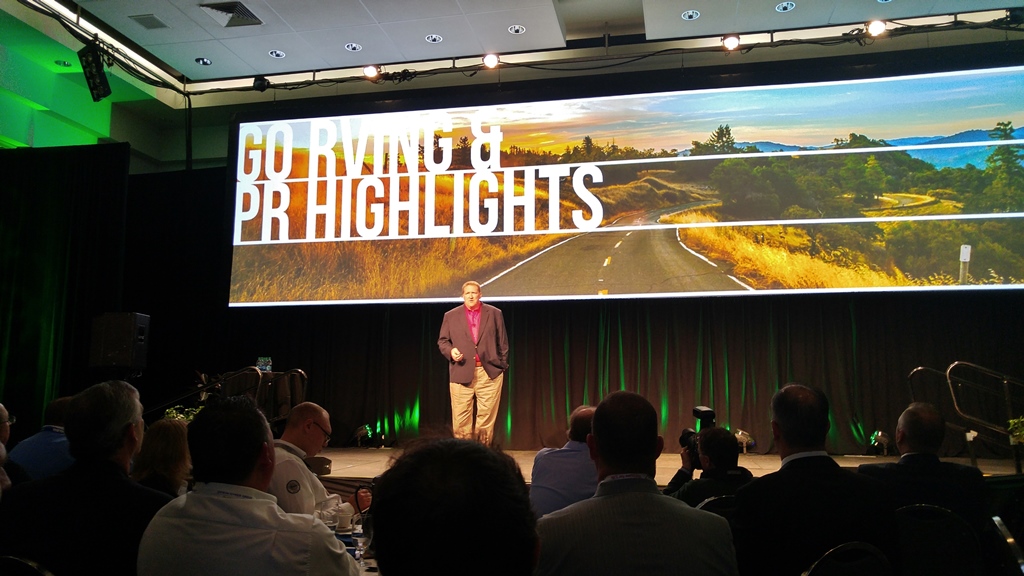 Even suppliers are getting into the act. We saw this at the Dometic booth, where their PR Manager Amanda (with me in pic below) explained they were launching a rebranding and a completely new social media presence. 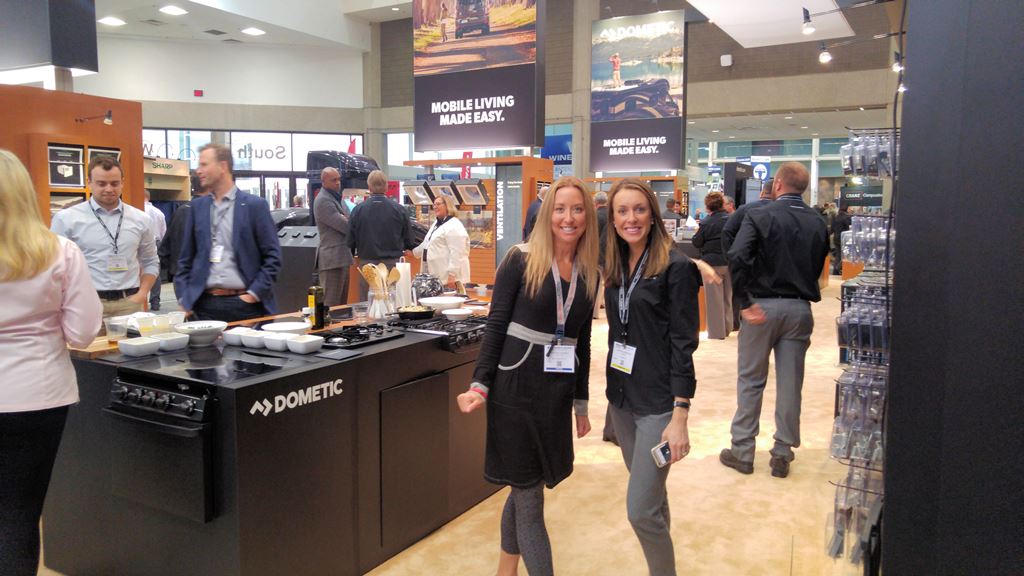 We've experienced the power of social media ourselves first-hand. I run a Facebook group for fellow Travato owners, over a thousand members strong. Suggestions that have repeatedly emerged from group members are finding their way into newer model year Travatos. For example, when group member Greg Schultz added an exterior light above the hookups to make night set-up more convenient, others started to follow. Guess what's now standard on all current Travato models? You got it, a dump light. 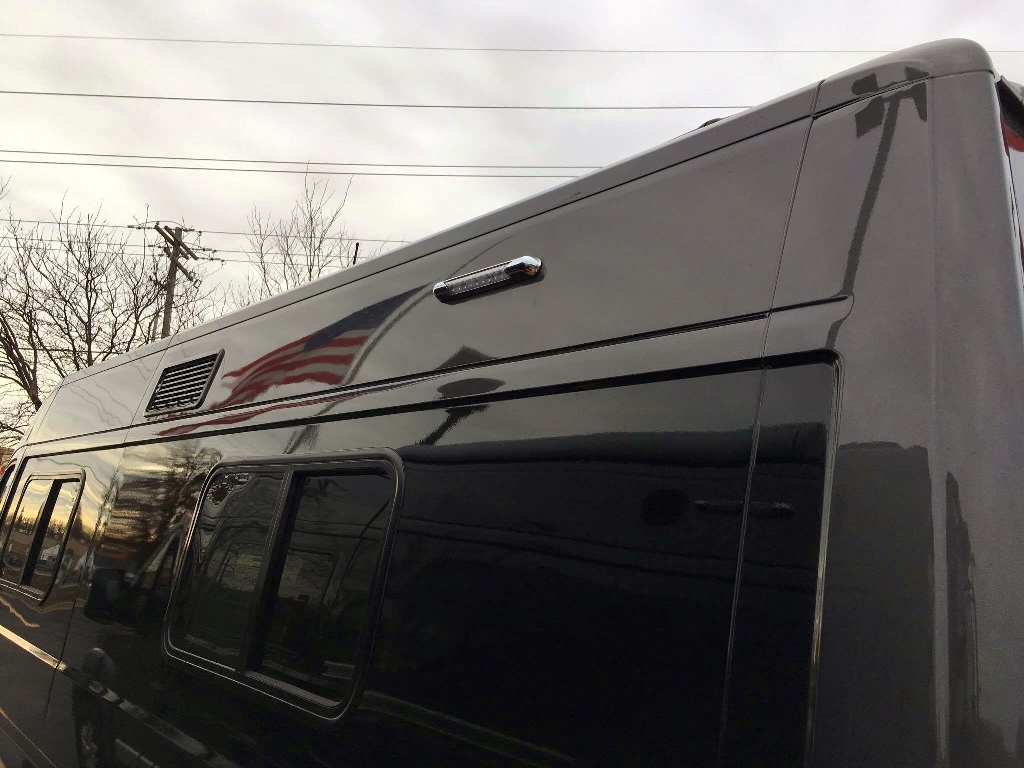 Another exciting trend is the focus on increased technology in RVs. 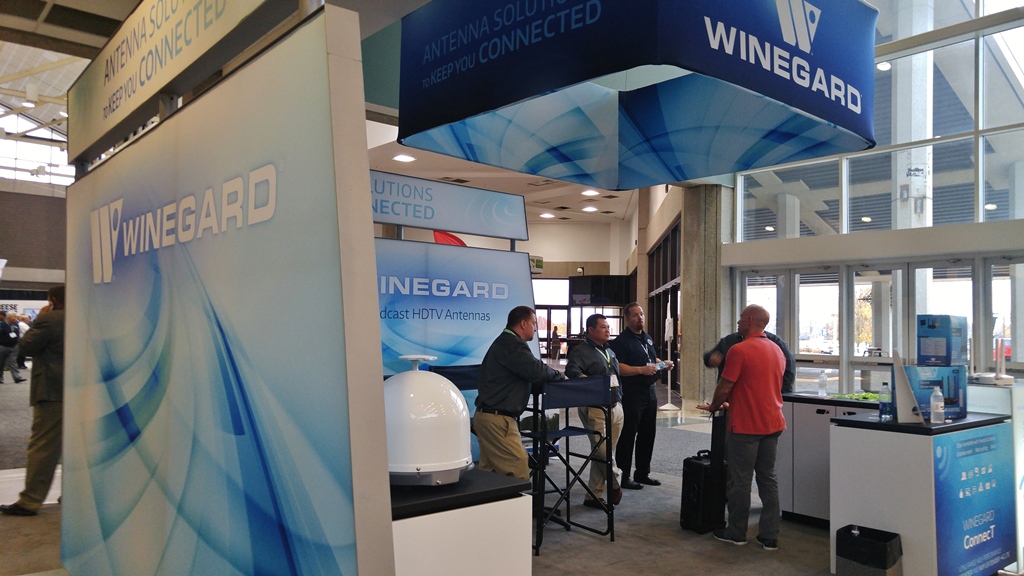 Winegard (who we all know for their RV TV products) has picked up on this trend and has started to bring out products for Wi-Fi at the show. Most intriguing is their ConnecT, which is a wireless access point for your RV that claims to pull in weak wi-fi signals through three external antennae. It bridges your devices to the external Wi-Fi without reconnecting all of them at every stop. This is an exciting shift from where the RV tech world used to be. RV technology now means something more than just 35 different ways to watch satellite TV.

You wouldn't think I'd be talking about refrigerators as a technology item, but we're finally starting to see more and more compressor driven (meaning, non-absorption) refrigeration options. 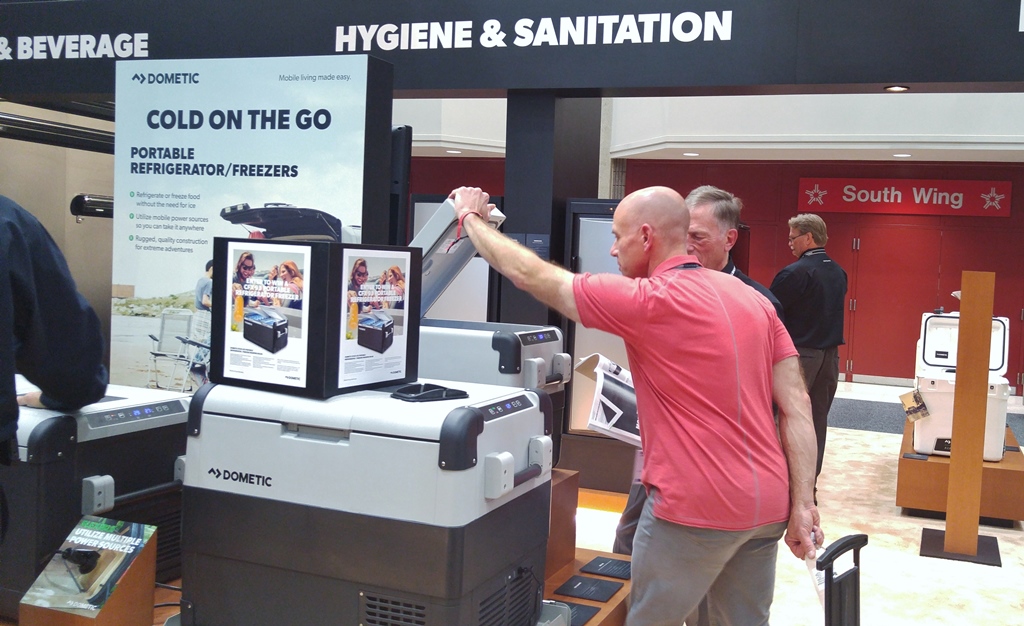 We think running your RV refrigerator from a renewable (and free!) resource is the wave of the future. While we're not calling the time of death for propane refrigerators just yet, it's good to see some forward-thinking options becoming available and accepted.

As for things that were "bleeding edge" technology a few years ago, we now see them becoming more and more common in RVs. Multiplex wiring is a great example of this, and Winnebago is working it into their ERA models as it refreshes each of them. Solar options are everywhere, and even becoming standard. You wouldn't have found a single lithium battery at the RVIA show - except in someone's cell phone- in past years.  These days, they're everywhere!  They offer what James calls a "greater energy density" than regular RV batteries.  Lithium batteries also offer a number of other advantages like greater "depth of discharge".  But the battery isn't the exciting part.  What's exciting is what you can do with all that energy!  Cue the inverters: 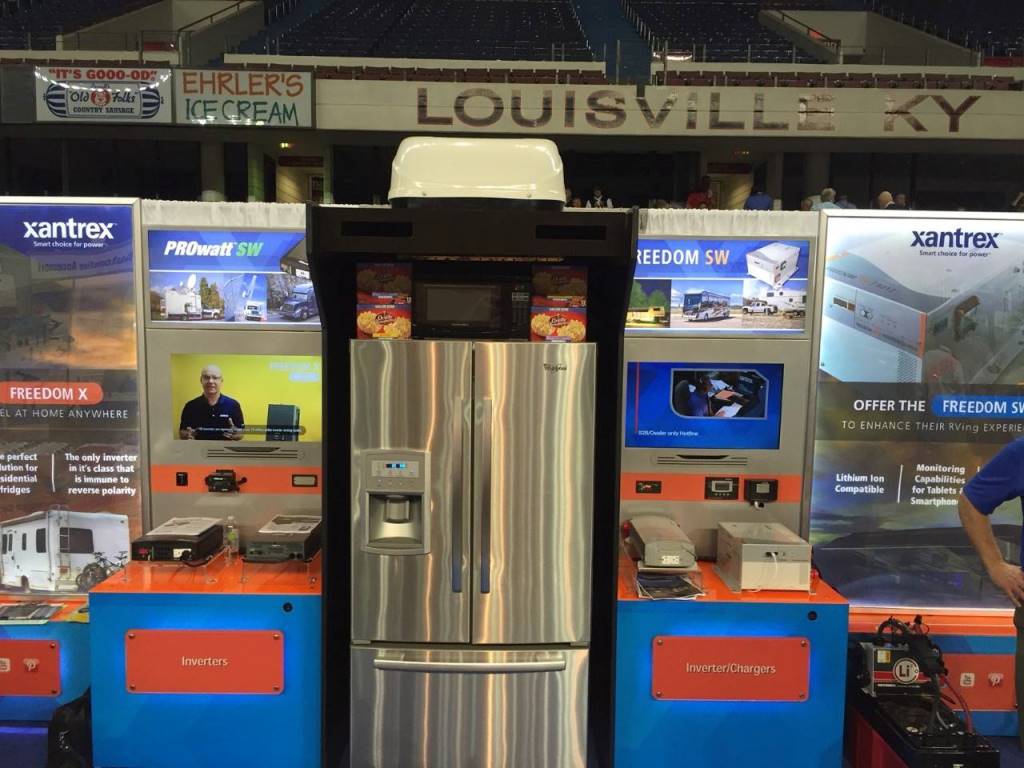 Inverters take that battery power and convert it to regular household current so we can run the air conditioner or use the microwave without a generator or being plugged in!  We are seeing more and more inverters in RVs. We even got the chance to catch up with our friends from Xantrex, who make the Freedom SW inverter that we installed in our own RV, Lance. 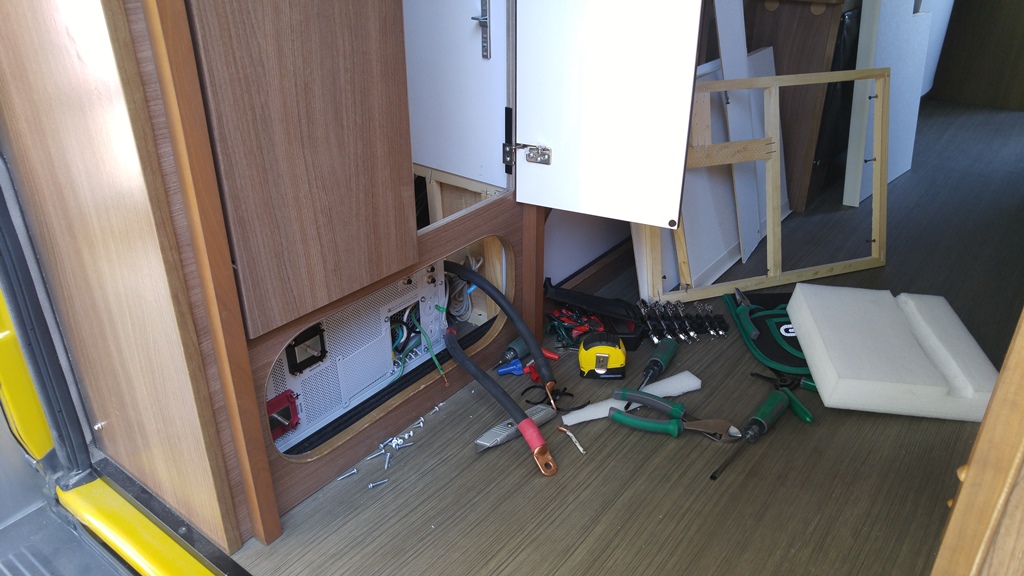 Here's something else we found curious. This year more than ever there seemed to be a lot more Europeans at the show, and I'm not just talking about the team from the German company Truma. At first we thought it was just an isolated incident, but as the show went on, we couldn't help but notice. Perhaps this is the flip-side of companies like Winnebago attending the Caravan Salon in Dusseldorf? Perhaps there are more European suppliers interested in providing their products to the North American RV market? We don't know, but whatever it is, we're excited to see this kind of cross-ocean pollination of ideas.

Another huge change at this year's show was the RVIA presence itself....or at least their public side, GoRVing. RVIA is hard at work to make the show more exciting, and to reflect the changing face of RVing. They had several "experience zones" set up throughout the show. 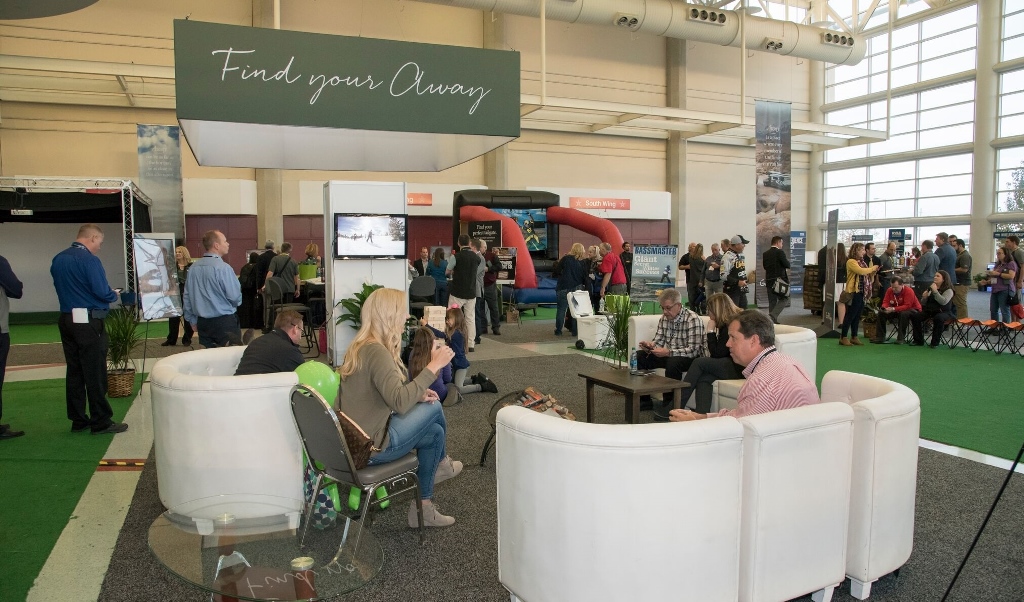 These zones had lots of things going on to entice show attendees to swing by. There were Power Talks by industry experts, interactive displays showing products of tomorrow, games like RV Trivial Pursuit, campfires to relax around and hear live story-telling, and many other fun draws. Some of the zones were even (gasp) active zones where participants could tee off with an LPGA champion, throw footballs, etc.

And finally, we can't talk about the RVIA show without talking about our favorite RV manufacturer Winnebago. Winnebago seemed to be going in a very different (and very cool) direction from other manufacturers with their display. Rather than being set up like a typical RV show with row after row of RVs, it was set up as a camp site -- complete with trees and landscaping that gave the impression you really were out camping...as long as you can imagine the crowds were invisible, that is. 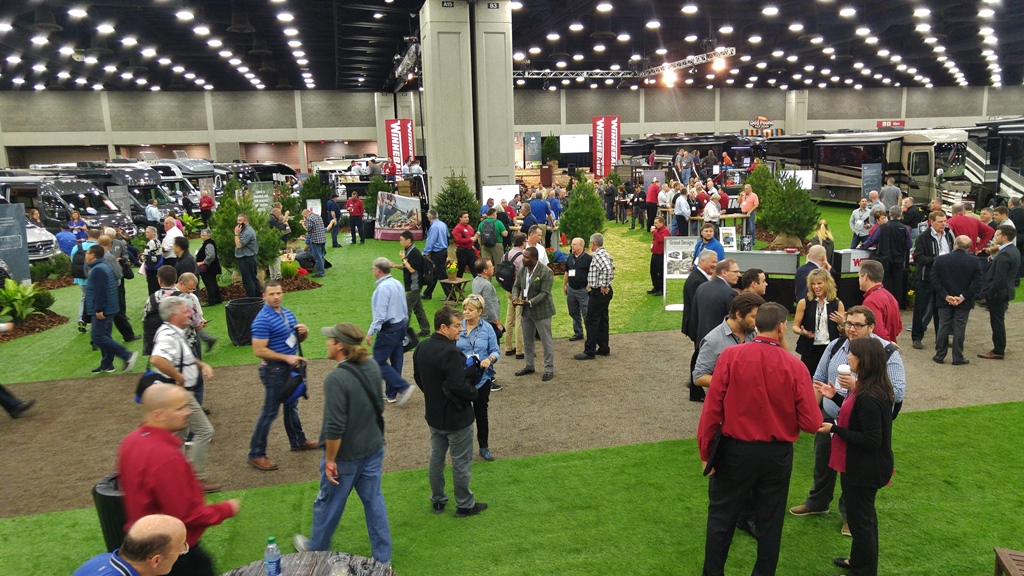 It was the booth of all booths at the RVIA show, and it took them days to set up. They brought a sampling of all their rigs from towables on up to diesel pushers, and of course our personal favorites...the campervans: 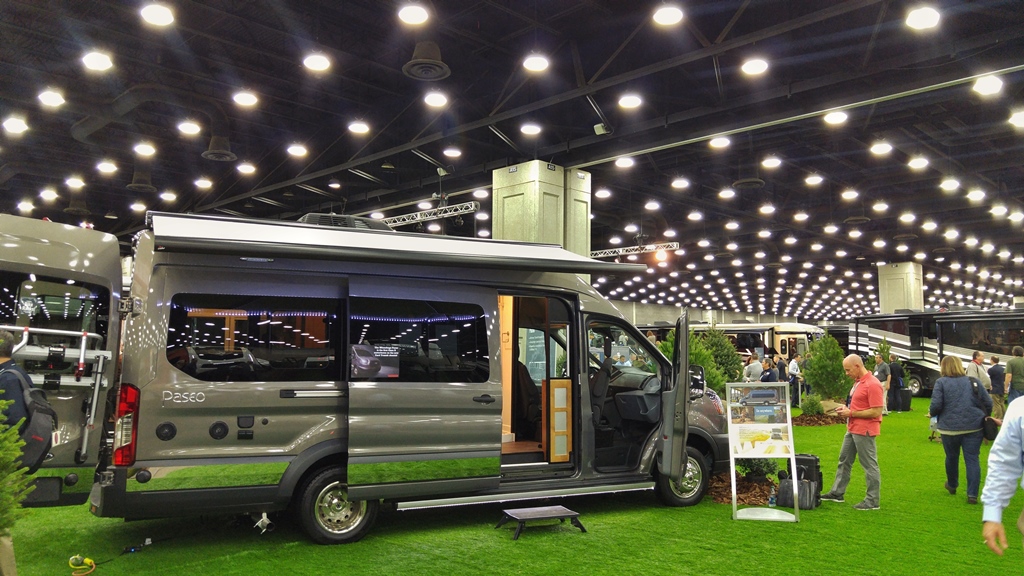 Since I found myself with nothing to do the day before the show, I ended up helping with pre-show setup. There's an excitement in the air before a big show. It was fun getting to take part behind-the-scenes. 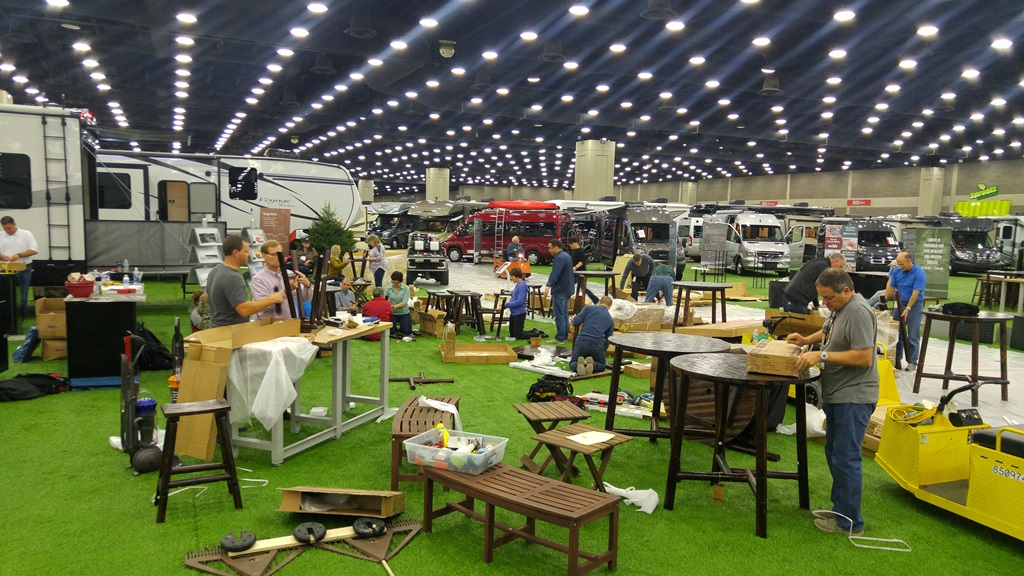 Winnebago had a stage in their display so their CEO and a few VPs could give talks throughout the show. James and I made it to a few of these talks. Winnebago has big goals for themselves to grow, improve, and continue to be industry leaders.

So, those were some of the highlights of our time at the show. We left pretty excited about the direction the RV industry is headed. Wouldn't it be great if we could look into a crystal ball and see where the industry is in 10 years? I have a feeling we'd like what we see!