The XYZs of TV for RV

(This story has been updated).

A while back I wrote a widely read story on how we set our Navion up for watching TV. I talked about off-the-air and satellite solutions. But, increasingly our home television viewing habits have been changing. Rarely do we watch anything in real time (outside of sports and news). Everything seems to be either recorded on our DVR (Tivo) or streamed through either our Tivo or AppleTV.

In making our Navion our home away from home I added a roof mounted satellite dish (Winegard Mission RT) and a Dish Network receiver. I also added an AppleTV the mix. Additionally we have a coach RV audio/video system (Jensen) that plays DVDs, but I've yet to play one with it.

The problem with streaming

These days, streaming is where it's at and it seems endearingly quaint to remember the tedious minutes of indecision peering across the shelves of a Blockbuster trying to figure out the evening's entertainment. But here's the problem - streaming on the road is a challenge and it can be very expensive.

In the dozens of campgrounds we've stayed at over the past several years you could count on one hand the ones that had good enough wifi to handle a video stream. Almost all campgrounds prohibit or physically restrict you from streaming across their wifi system as they're just trying to make sure all their guests have at least some basic e-mail and web surfing capability.

If you have a data plan through a cell carrier then, depending where you are, you may be able to get a good 4G or LTE data signal that can handle a big data stream. However, that can be very, very expensive as a two hour movie can chew through 2-4 gigabytes of a data plan. If you're lucky enough to still have a legacy unlimited data plan this may be less of an issue. However, many carriers quietly start to limit your bandwidth speed on these types of plans. Sure it's unlimited. . .but. . .you're. . .going. . .to. . .wait.

So if you have an AppleTV, Roku, Chromecast, or Fire streaming player it can be pretty hit or miss if you want to fire up for an evening of streaming TV viewing. If that doesn't happen there's always the fallback option of a book. But wait! In this moment of entertainment despair there is an answer. It's called off-line streaming and it has opened up new options and flexibility for evening viewing.

The two most popular subscription streaming services are Netflix and Amazon. Amazon was the first with downloadable (offline) viewing and now Netflix has joined the party. Additionally some cable providers such as Xfinity (Comcast) are starting to offer downloads.

It starts with a Netflix subscription at $7.99 per month or Amazon Prime subscription for $99 dollars a year. I've been a Prime subscriber for years specifically for the free two-day shipping. We use Amazon for a huge variety of purchases and it's always my go-to vendor for RV gear. For us the free shipping alone is worth it. But now, with our Prime membership the access to movies and TV shows is the whipped cream and cherry on top. We also have a Netflix account and while there is some overlap between Amazon and Netflix, both offer different fare and an increasing selection of top-notch original programming.

You might have to pay a rental fee for the latest movie release on Amazon (like you do on services such as cable pay-per-view or iTunes) and more than likely these are available for streaming only. However, there are thousands of programs available for offline viewing that are included for NO additional charge with your Amazon Prime subscription -- notably many top HBO and PBS series. Similarly, Netflix offers older movies, but also many new TV series and made-for-Netflix programs.

You download either Netflix's or Amazon's free iPad app (they also have an Android version through Google Play), log into your account and start browsing their extensive catalog. Each service will indicate what programming is available for downloading. 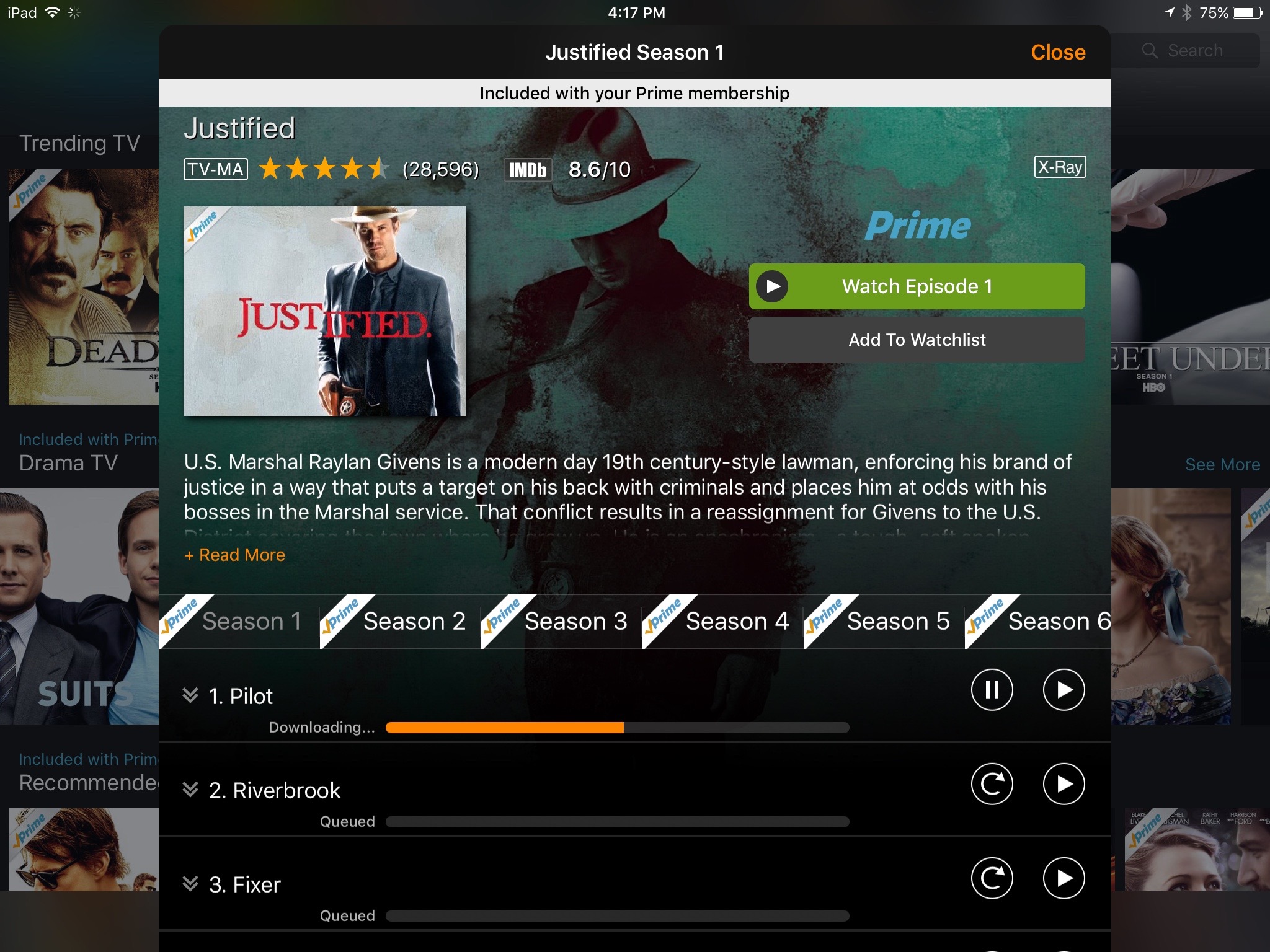 I watched a two hour Amazon movie take five minutes to download via our fast cable connection at home. Though the videos are temporarily stored on your device the files do eat up memory storage space. A rough estimate is that you need about one gigabyte of storage per hour of downloaded video. If you're downloading a bunch of shows and movies, you'll want at least 32GB of storage. I have a 64GB iPad and with music, photos, and apps I have about 20GB of free space. When I'm done watching a program, I simply delete it to free up space for future downloads.

The Netflix files downloaded faster and I soon found out why. While the Amazon files play back on your TV at full screen size (more about this below), the Netflix downloaded files play back on about 2/3'ds of the screen meaning that the viewing image will be floating with a wide black border on your TV. Nonetheless, the program is still highly viewable, just not as theatrical. (I did find that any content that you stream from Netflix does fill an entire HDTV screen, just not the downloaded ones). What you trade off for smaller external screen size is quicker downloads and the ability to store more programs. This may be of additional benefit for traveling RVers who have to rely on campground wifi or are carefully watching their cellular data plan.

You do need to think ahead before you leave on a trip and decide what and how much to download. Both the Netflix and Amazon apps allow you to download a batch of programs so, while you're home and connected to fast Internet, you can queue up programs to download overnight or during the day when you're doing other things.

And while Amazon and Netflix have the most extensive selection of programs, there are emerging alternatives. For instance, if you're a Comcast customer, their app also allows downloading of selected movies and TV shows for later playback.

Connecting to your TV

Any flat screen TV with an HDMI input will work. And of course you can choose anything you've downloaded to watch directly on your tablet (headphones really make a difference in the experience!). Some TVs have multiple HDMI inputs. Using your TV remote you can select the proper input. Ours only has one input and that's where the satellite is plugged in. Instead of cable swapping I bought a simple HDMI switch that senses if there's a signal running through the cable and switches to the input device. 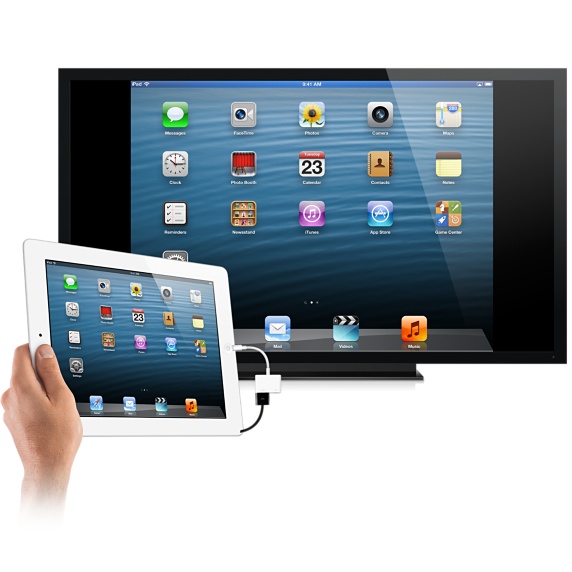 If you already own a late model AppleTV then there's the option of keeping your AppleTV connected to your flat screen and wirelessly beaming a video from your iPad. I've tried that with limited success. For a variety of reasons it can be finicky. That's why I've come to the much lower tech solution of using an HDMI cable.

The iPad doesn't have an HDMI output, but Apple makes a $39 dollar adapter that has both an HDMI jack and a power cable pass through so you can charge your iPad while you're watching. 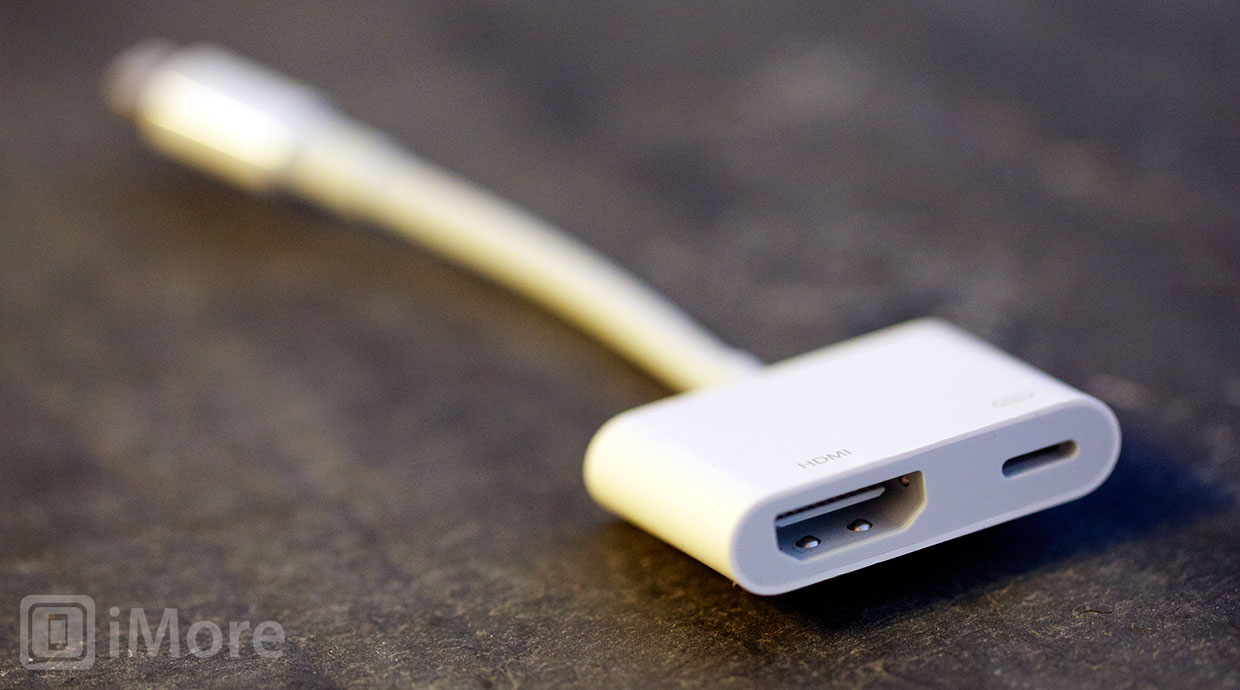 You can pick up an HDMI cable just about anywhere. I have generally found the best price on decent cables are from Amazon. In a pinch on the road I ran into a Best Buy and it irked me to spend nearly $20 dollars for a six foot cable that I could have bought on Amazon for about four bucks (think ahead Don!). HDMI cables are generally pretty thick and can be a bit unwieldy. I found a nifty 15' foot ultraslim cable for $18.49 on Amazon.

The long cable allows us to move the iPad around at different locations in terms of where we're sitting. Just for grins I connected my iPhone 6S using the Apple HDMI adapter and a test download from Amazon played back perfectly in hi-def. While I don't own any Android devices, my research indicates that they would work in a similar way with the proper cables and connectors. An added bonus is that you can also view, display and edit photos and videos from your phone or tablet with the benefit of viewing them on a larger display.

I have yet to find the perfect one-button, no-hassle, no wires solution to playback media for the road. I'm a little closer to ultimate happiness at home, but the technologies I use aren't practical for adaptation in an RV -- especially a compact one like our Navion. Sometimes simple is better. And the rather low-tech solution of attaching my iPad via a cable to our flat screen television has proven to be easy, convenient, and surprisingly satisfying.