GoGear: Our RV is Streamin' now!

If you've toured some high end coaches these days you'll find they have some pretty sophisticated home entertainment systems that allow you to switch multiple inputs and send signals to multiple TVs like a sports bar. But what if your rig isn't set up for some of the technologies you enjoy at home?

In our new Navion I wanted to add a little of that home entertainment convenience with the ability to switch easily between our satellite receiver and a digital media player.

The Navion came prewired with an external HDTV antenna and an input jack for cable TV. Both of our sets have multiple inputs (antenna/cable/HDMI) which you switch from each TV's remote.

Our two sets are about 6 feet apart, so it wasn't important to set it up for watching two different shows at a time. All I wanted was to make sure I could send the same hi-def signal to both sets at once. However, to do so I had to have Winnebago do a custom HDMI wire run from our TV cabinet to the bedroom TV (standard units are built with a lower-res composite cable going to the rear TV).

Here's a schematic of how I planned my system. Let me walk you through it. I bought the following components: 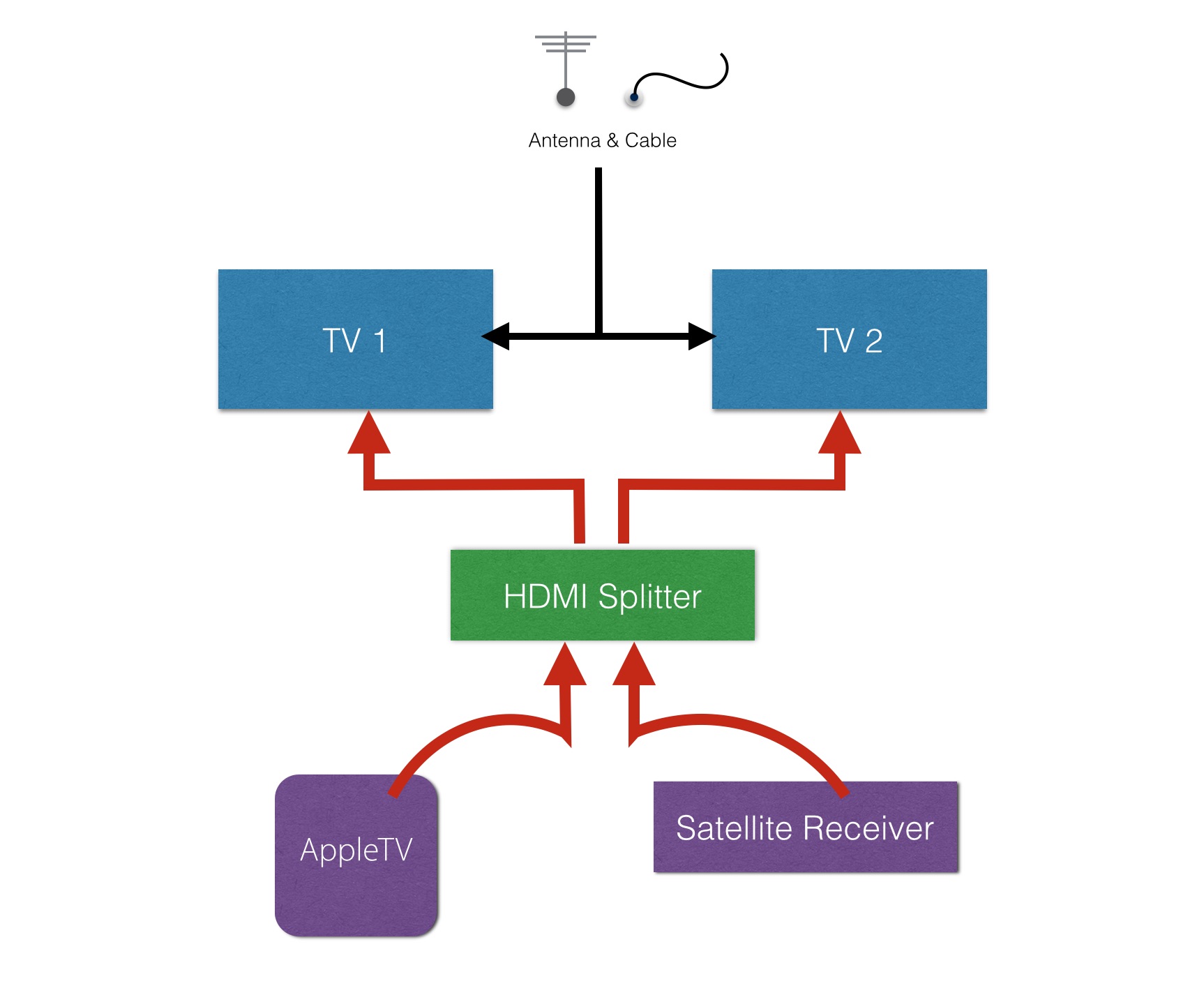 I already had a: 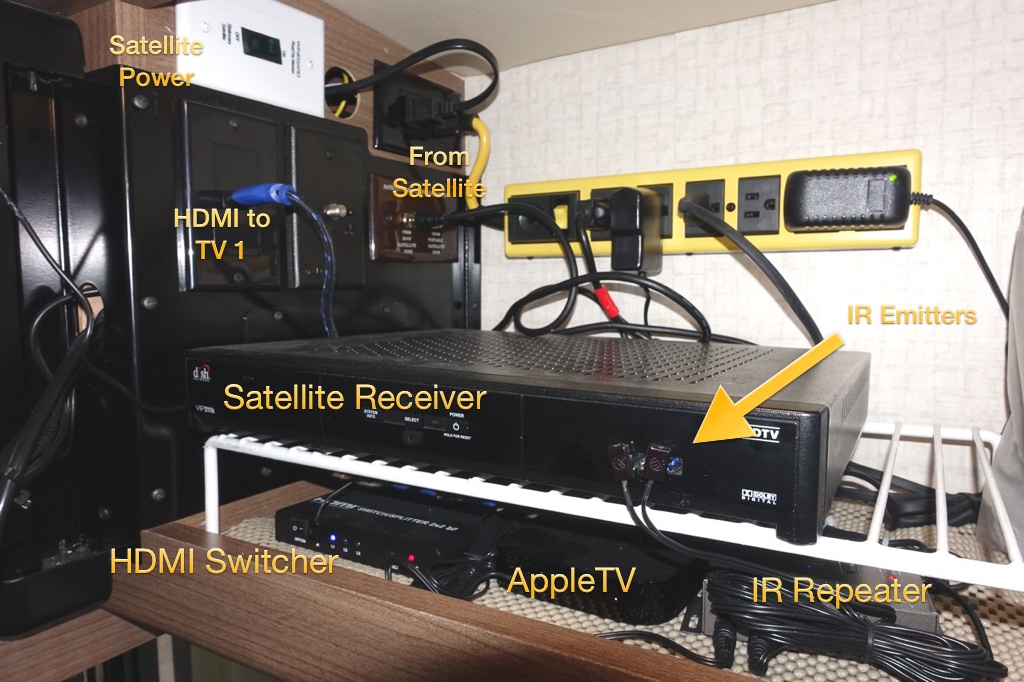 It's all behind the TV cabinet. The wire kitchen shelf rack was cut down to provide a low, ventilated platform for the satellite receiver which gets petty warm.

My goal was to be able to switch between our satellite receiver and an AppleTV digital media player. Both devices use HDMI for output. To switch between the boxes, but send the same signal to both TVs at the same time, I bought a small HDMI splitter. So I didn't wind up with a rat's nest of cables I bought several short (2 foot) HDMI cables. Along those same lines, I opened up the power strip and then cut, shortened, and re-soldered the cord so I only had less than a foot sticking out. This also provided the convenience of being able to shut off all the electronic systems (primarily for dry camping at night and not draining power through our inverter).

Because all our electronics are hidden behind the TV, I also needed to buy an IR repeater. Repeaters come with a very small self-stick sensor attached to a tiny cable that runs back to the main unit. 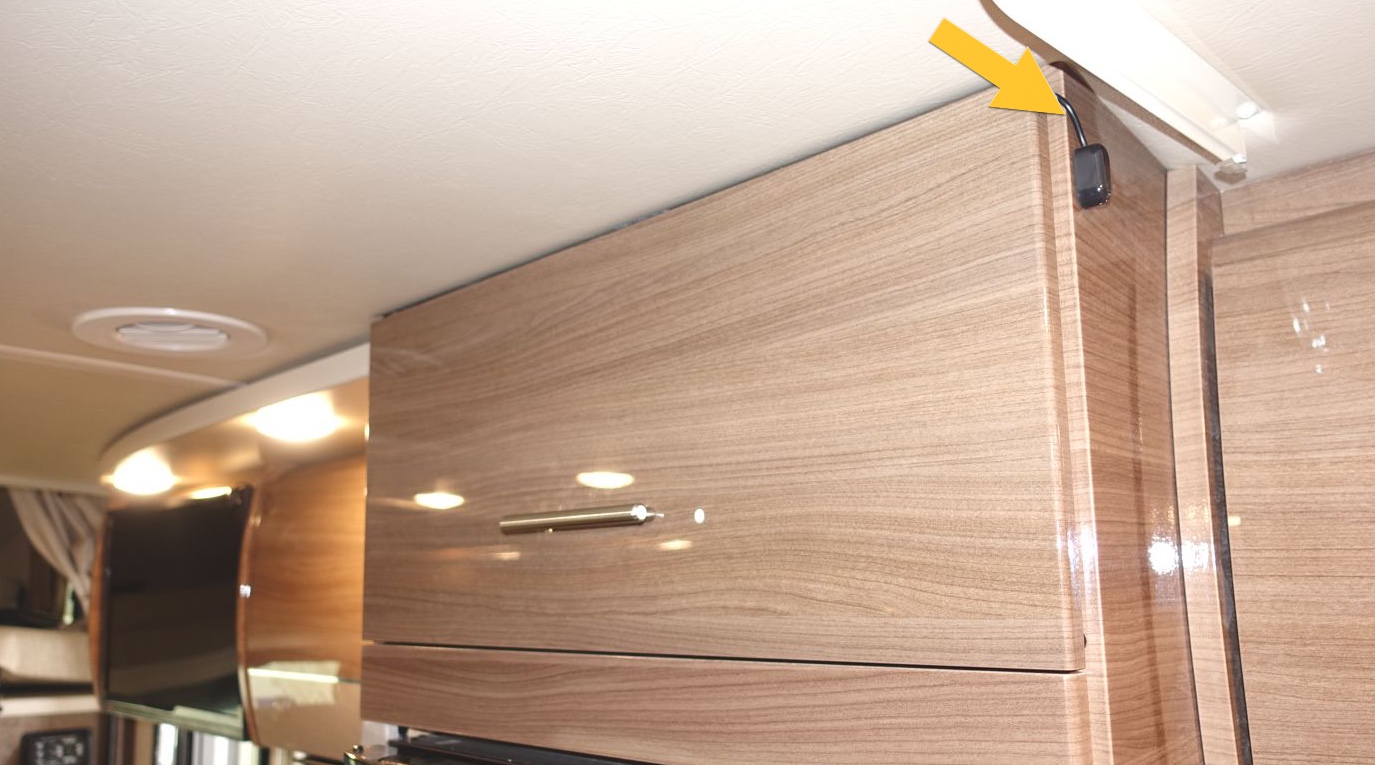 This IR repeater looks for remote signals from the Navion's bedroom. The cable runs back to the IR hub behind the TV cabinet in the background.

I carefully placed two receivers near the front and rear TV so it would pick up remote commands from two locations. I then plugged two emitters in and ran their tiny self-stick ends and affixed them near the receiving window of the AppleTV and satellite receiver. IR receiving windows are often hidden behind smoked glass or plastic and you sometimes have to play around with covering the front panel with opaque cardboard, paper, or your hand, and then press the remote to see if the device is communicated with. When where you've covered up doesn't work when you press the remote, that's probably where the IR receiver window is and where you should place the emitter on or near it.

I needed a very simple HDMI switcher, but if you have the need for additional components such as a DVD player or gaming system, there are many choices of boxes with more inputs and outputs.

Amazon is my go-to source for cables and electronics. The cables were just a few dollars each, the HDMI switch $30, and the IR repeater $50 (which included a second receiver cable). Together, the components ran a little under $100.

It's was nice to see the plan come together and this arrangement has worked out quite well. The only inconvenience is one that most households fight: a handful of remotes to run everything.

Over the years I've fussed around with a lot of different consolidated remote solutions. Today, many remotes that come with your TV or satellite/cable boxes can "learn" other commands. One frustration is that some Jensen TVs that you see in a lot of RVs seem to march to the tune of a different digital drummer and won't work with a universal remote (like mine). I've had a couple of Logitech Harmony remotes over the years and have found them to work, but to be less than satisfying. 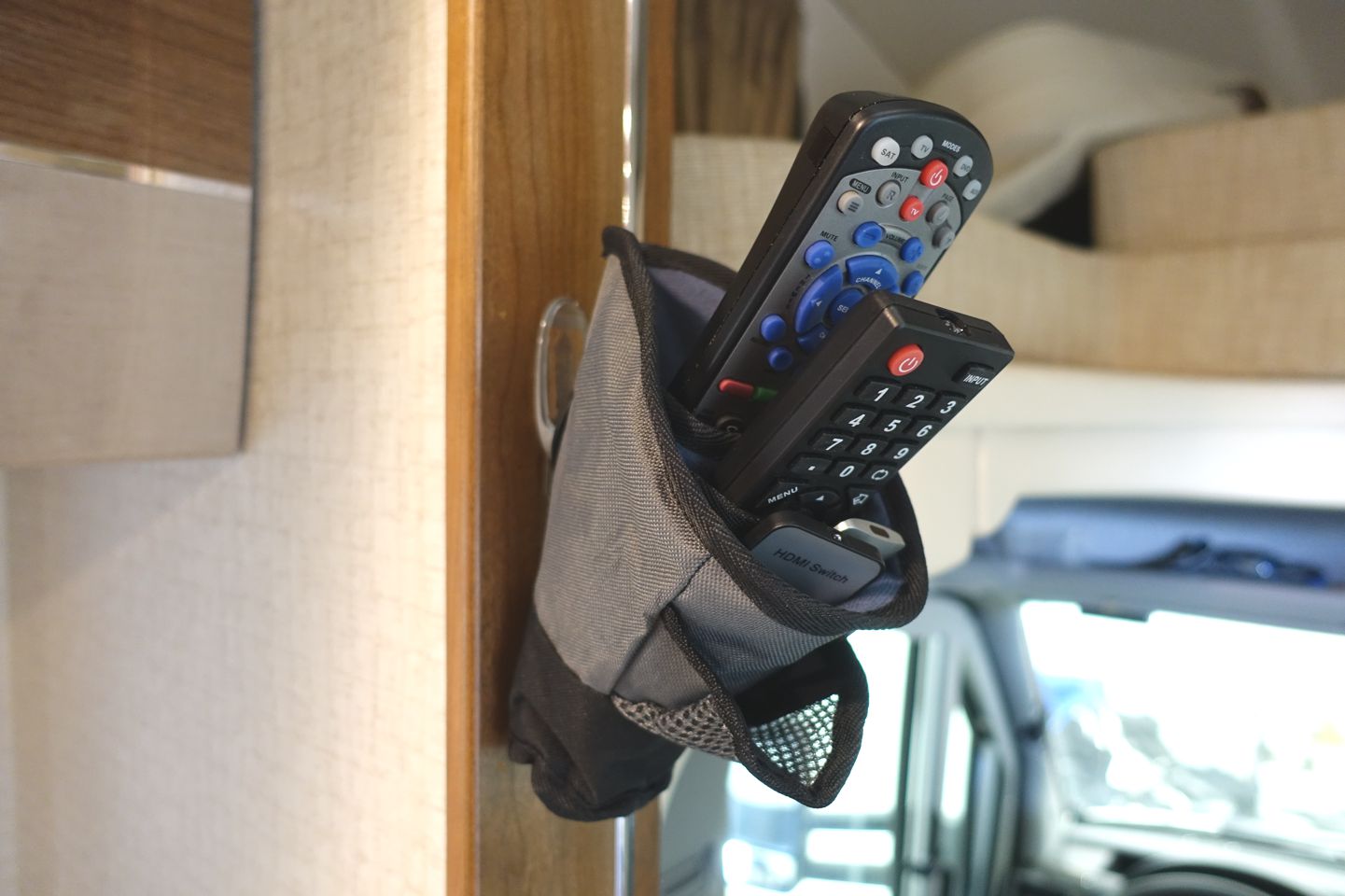 Remote hell. If you have to use 'em all, where do you keep 'em? This nifty caddy ($15 at The Container Store) is really designed to fit into a cupholder, but hangs conveniently on a 3M Command hook.

The big problem with universal remotes is that often the same button acts differently for a different device. Universal remotes range from about $40 to $300 dollars. With universal remotes there's two learning curves. The first is in programming and the second is developing the habit of knowing what button does what. For now, my solution was to find a nifty little holder at the Container Store to hold all the remotes. I'm holding out for a future of verbal commands through an Apple Watch. . . .and I don't think I'll be waiting all that much longer.