Cell service and an internet connection is no longer "nice to have" in many RVs, it's a downright necessity. Take me, for example. I work in the IT industry, and Stefany and I also run an RVing website of our own. Stefany too, has to remain in contact with her personal training clients when we're on the road. Simply put, we can't afford to be out of touch for very long. We don't stay in many RV parks, so we use our cell phones for ALL of our connectivity.

That's why, when Winnebago was building our tricked-out Travato, I sent them a cell signal booster to install with the rest of the electronics. The Winnebago team did a great job with the install, which I'll show you, and we felt like it worked well for us. But I didn't really have anything to back that feeling up... until now.

There are whole websites (http://www.rvmobileinternet.com/) dedicated to better internet and cell connections in your RV. You can go there to get more detailed information. In this post, I'll be covering a couple installs, and focusing on the testing I've done. The idea here is to show you some things I know work. You can use that, and other knowledge to come up with something that will work in your RV.

The system I sent Winnebago to install was a weBoost Drive 4G-X. weBoost (formerly Wilson) has a range of cell signal boosters, and a long history in the field. We chose this model because it has an indoor antenna, rather than a cradle; it's capable of serving more than one phone at a time; and it works for multiple carriers. (Stef and I have different carriers on purpose, if one doesn't work in a particular area, the other one likely does!) Here are the different parts of the system as they were installed: 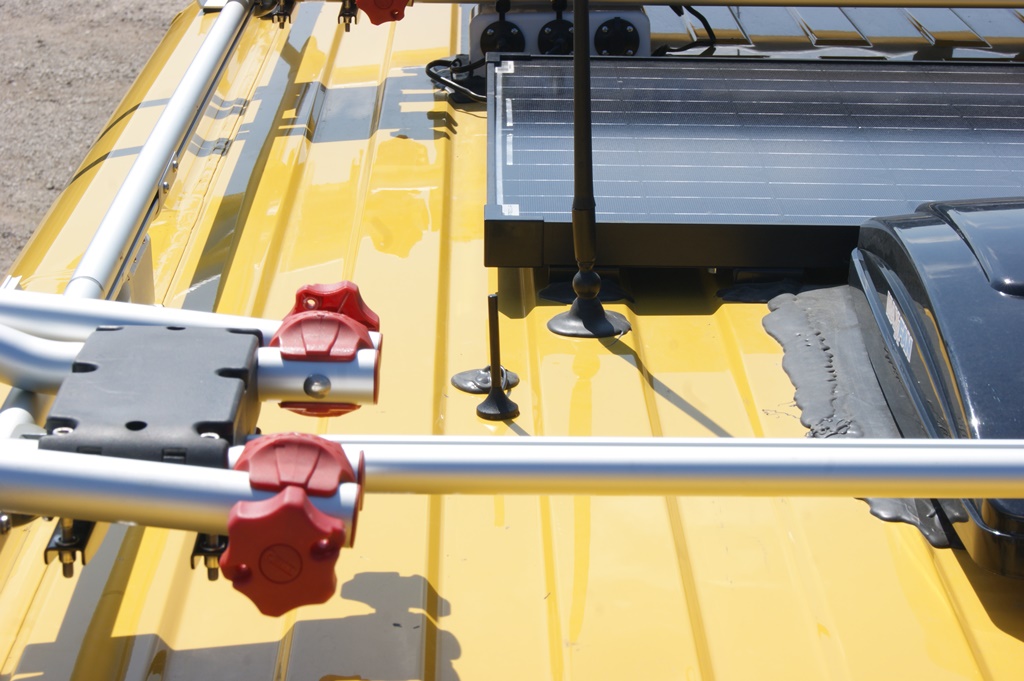 First up is the external antenna. You can see it in the center of this picture. weBoost provides a small, magnetic mount antenna which works great on the metal roof of our class B van. Besides an easy mounting surface, the other advantage our metal roof provides is that it serves as an enormous "ground plane". Without getting too deep into antenna theory, a ground plane is a reflective body at the base of the antenna that greatly improves reception. A ground plane for cell signals should be a minimum of 8 inches across. With 140 square feet of metal roof, I think we're covered! 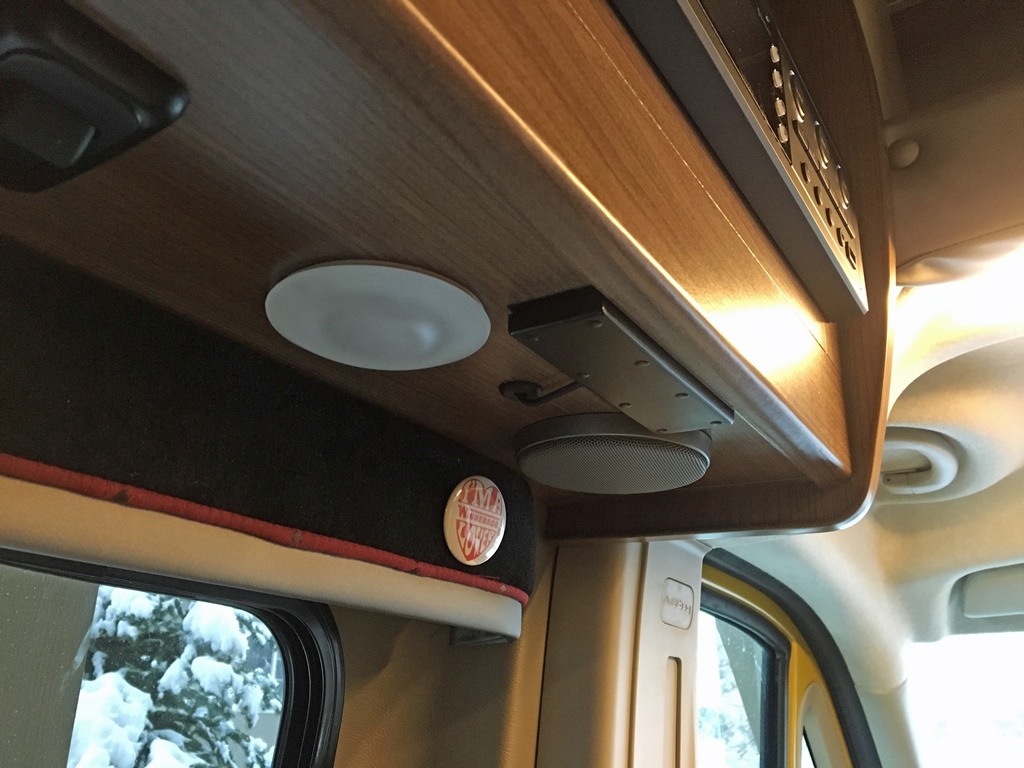 The next major component is the indoor antenna. In the picture above, it's the metal bar mounted to the underside of our cabinets. Think of this as the "repeater" antenna. It has a range of only a few feet, so placement of this antenna is critical. It needs to be placed where you anticipate needing the signal boost. For us, this location covers our dinette table (where we work), and the front seats while we're driving. 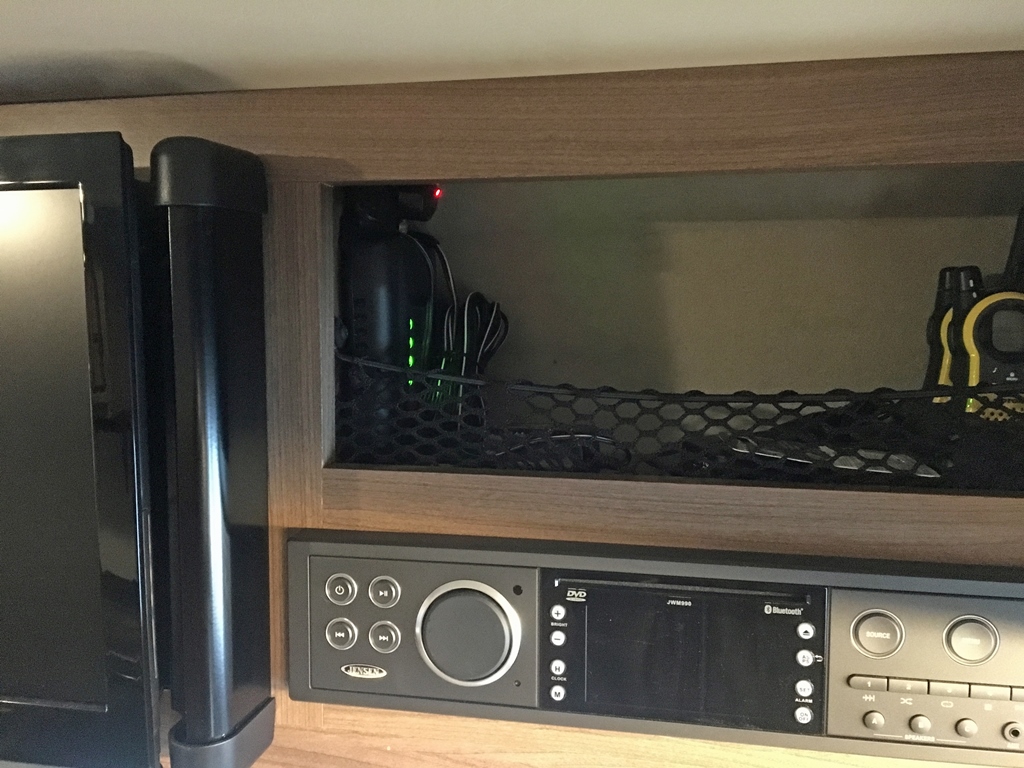 And finally, we have the weBoost unit itself. In our Travato, it sits above the radio -- you can see it with the green lights on. It has connections to both antennae, and also a power connection (red light -- it's just a 12v cigarette lighter plug). The unit runs off of 12 volt power, and I've verified that, when it's running, it uses about 1 Amp of 12 Volt electricity.

We've had plenty of anecdotal evidence that the booster was working for us. For example, last summer, when we were visiting Forest City, Iowa for the WIT Club Grand National Rally, we were able to achieve decent internet speeds on Verizon, and we were able to actually make a connection with AT&T -- but only if we were sitting around our dinette. For those who don't know, Forest City is the land that cell service forgot, and AT&T just doesn't work there at all. We thought it was a pretty impressive showing.

So we thought that was encouraging, but still not real numbers. So I ran a test. I took two different cell phones (an iPhone 6s and an LG G4), on two different carriers (iPhone on Verizon and LG on AT&T) and put them to the test on the same day, and under the same conditions with our weBoost.

But before I could run the test, I had to have a better measurement than just "bars" or "dots". Android phones make this easy, and will actually show you the received signal strength in dBm (though you have to drill through several menus to find it). iPhones aren't that transparent, and you have to put your phone in field test mode to get the same information.

dBm is a numerical representation of signal strength, but it's not measured "normally". dBm values are always negative, and the less negative they are the better your signal strength is. But what makes a "good" versus "bad" signal strength is different, depending on if your phone is receiving 4G LTE signals or not. Again -- there is a lot of information out there, but to keep things simple, I measured each phone with LTE turned on and turned off. I used the following guidelines to ball-park what a "good" signal might mean. 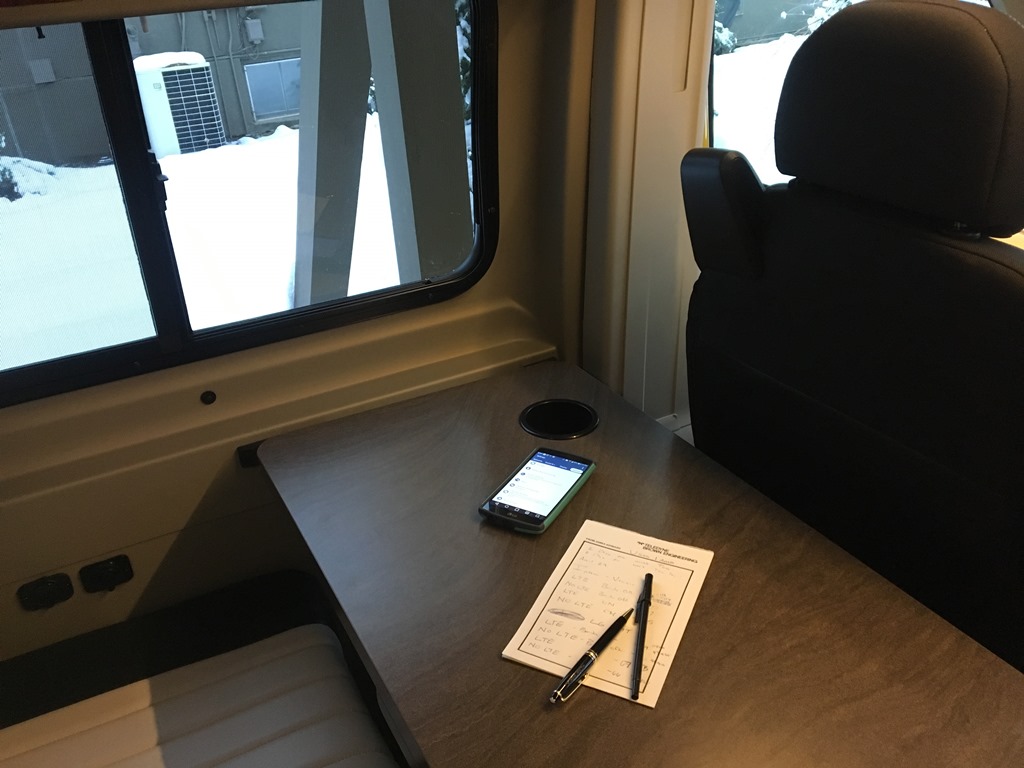 The actual test setup wasn't any more complicated than turning phone features on or off (for 4G), turning the booster on and off, and recording the results. First, I tested with the Android phone on the AT&T network with LTE enabled. (I figure most people probably leave LTE enabled all the time.)

Here is the signal strength with the booster turned off: 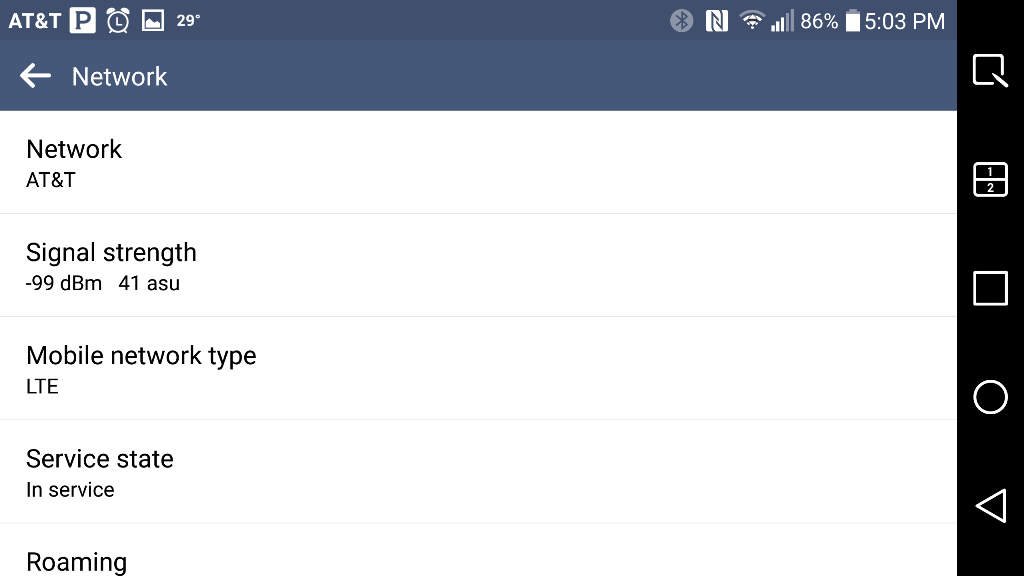 -99 dBm is actually a "good" signal. But look what happens with the booster turned on: 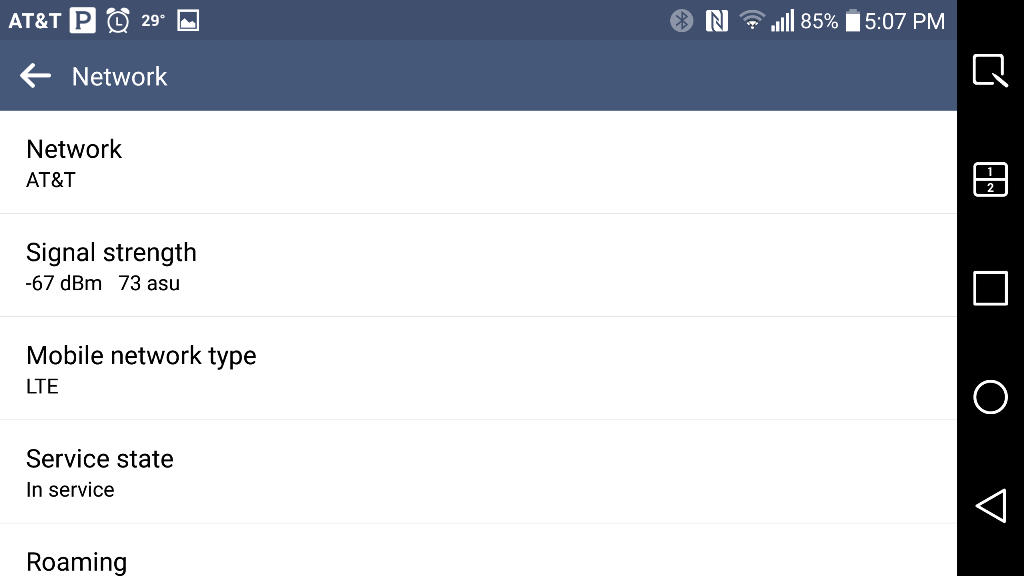 The signal strength went from "good" to "well beyond excellent". Either something was wrong with the phone, or the booster is providing a substantial boost of signal strength. AT&T is the stronger network at our home, but we had similar luck with an iPhone on the Verizon network. The signal went from -114dBm (fair) to -87dBm (Excellent).

Clearly, the weBoost was having an easy day of it with 4G signals. But if you're in a less urban area, you might have only a 3G signal to work with. How did the booster fair with that? First up: the iPhone on the Verizon network. Here's what things look like with the booster off: 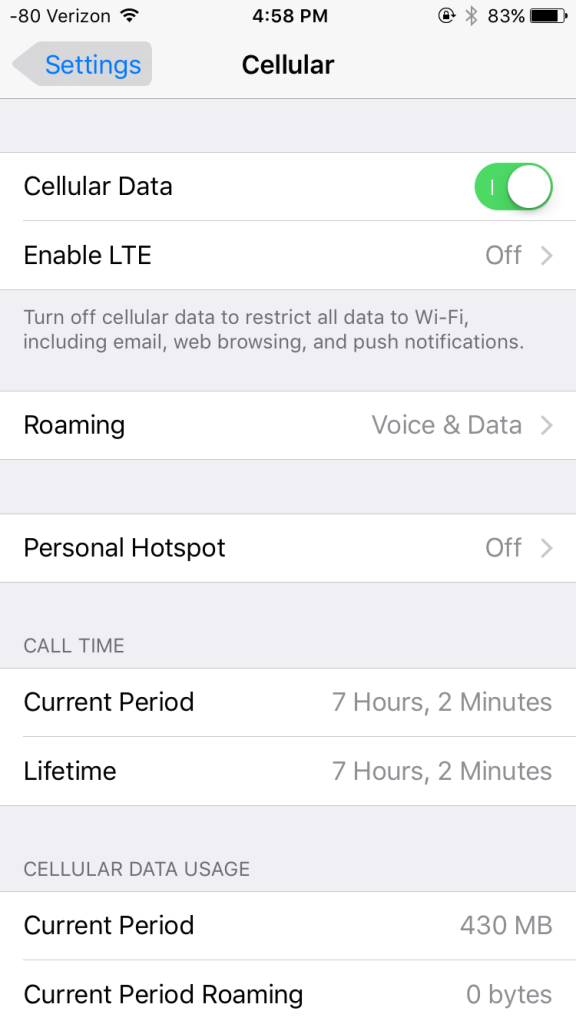 Signal strength here on 3G is -80, which is actually "good". But with the booster switched on, things improve quite a bit: 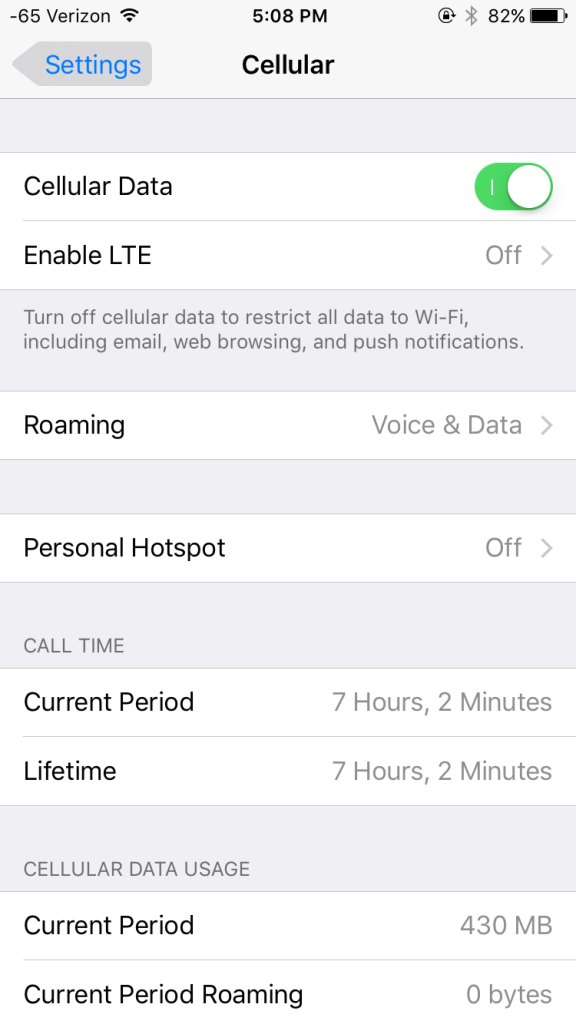 A signal strength here of -65 takes us up past "Excellent". Since this Verizon iPhone is the one I use for the bulk of my day job, perhaps I should run with LTE turned off -- or just go work in my RV! We had similar great results with the Android phone on AT&T using only 3G: -100 dBm (Fair to Poor) with the booster off, and -65dBm (Excellent) with the booster on.

I've always felt my little "RV Office" had pretty good connectivity, thanks to the weBoost amplifier. Now that I've done some testing, I'm sure of it. The weBoost Drive 4G-X delivered impressive signal strength improvements for multiple phones, on multiple carriers, and on both 3G and 4G networks. It's a keeper.

But you don't have to have a hardwired system in your RV to get the benefits of a signal booster. If we can assume that the results of my experiment apply to other weBoost models (and we have no reason to believe they don't), there are a number of other options to choose from. One of the more popular (and portable) options is a cradle mount booster.

Don Cohen, GoLife's editor, has been using a Wilson Sleek 4G cradle in his Navion for the past three years and is pretty happy with it. "I've been very satisfied," Don says. "There's been quite a few occasions where I could get a voice cell signal only using the cradle. Additionally, it's been helpful when using either my iPhone or AT&T mifi for getting a data signal into the coach." 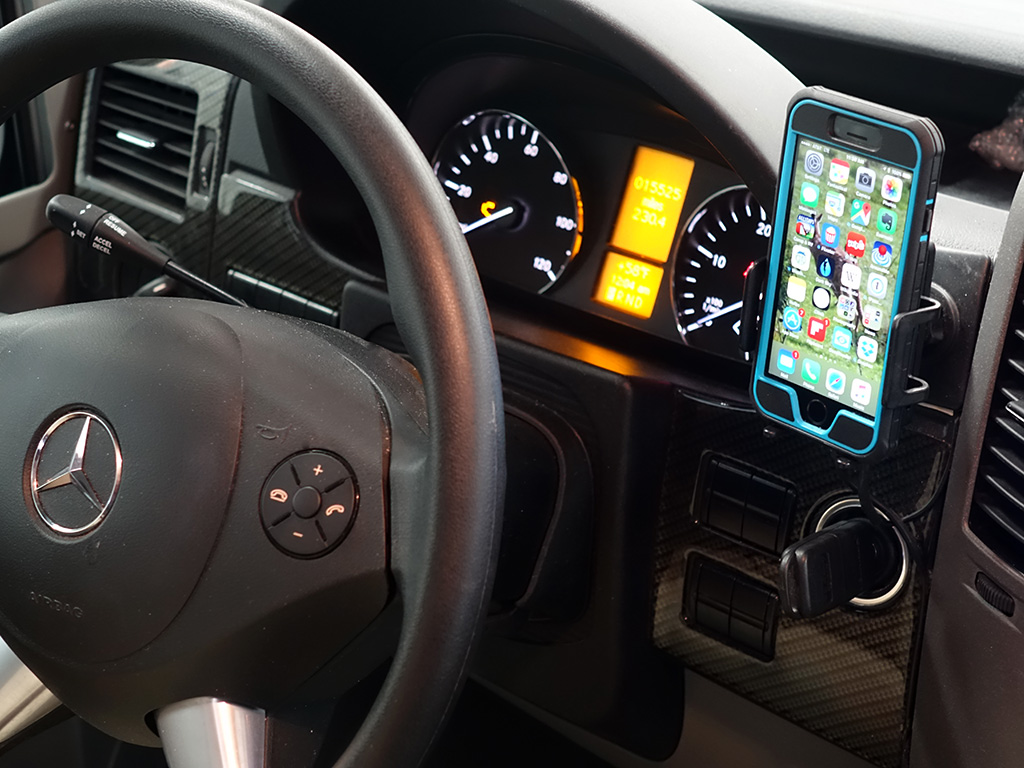 Don mounted the cradle right above the ignition on the Navion's dash which gives him great visibility to his phone when using apps like iExit. He used 3M OnCommand mounting tape for easy future removal, but then applied a heavier duty construction glue between the cradle's back to keep it from peeling off when the front of cab gets warm in a parking lot.

The cradle provides connections for both the antenna and power. "I think that's one weak spot in the design," Don explains. "The mini-usb cable that connects the cradle to the iPhone started losing a solid connection, so power to the phone was intermittent. Ultimately, when and if my iPhone needs charging, I simply run a separate cable from the accessory socket to the phone." 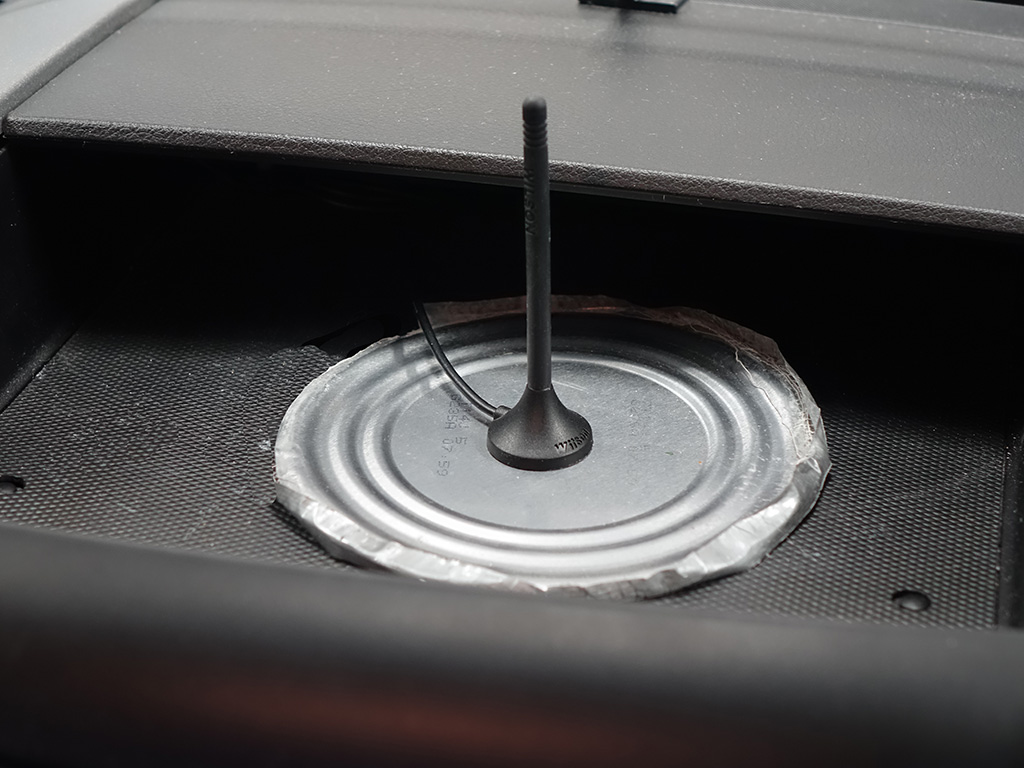 For an antenna, Don uses the small magnetic mount that came with the cradle. He laughs, "It's sort of a third world solution that I ran the cable from the booster to the antenna that sits up in a storage well on the dash. I cut a large food can lid off, and wrapped the sharp edges with duct tape which is magnetic and creates a very simple ground plane."

Don believes it all works well enough, but thinks that a roof mounted high gain antenna would be better. "In a perfect world I'd like to see all Winnebago coaches come prewired for an external antenna. I've looked at routing a cable from the dash that's tucked out of sight to appear up on the roof, but what I have now seems to be good enough. While I'm pretty handy, that would definitely be a more advanced project."

If staying on-line and in-touch while you're on the road in your Winnebago is important to you, it's a pretty safe bet that a cell signal booster is in your future. A good booster can free you from the perils of campground Wi-Fi and provide service in areas where you might otherwise have trouble. With many models to choose from, there's sure to be one that fits your needs and your budget.

See you on the road (and online)!