We've written here before about locking your bikes up as an RVer. Since we usually travel with bikes, it's an important topic for us. We're always on the lookout for anything that can make securing our bikes easier, and we came across one recently that we wanted to share: the NuLock Bluetooth Bike Lock.

There are a few good ideas at work behind this lock. The first bright idea is to enable you to lock and unlock your bike without bringing a key or remembering a combination. You'll be locking and unlocking your bike with the smartphone that's probably in your pocket anyway. Nothing extra to bring or remember ... excellent! 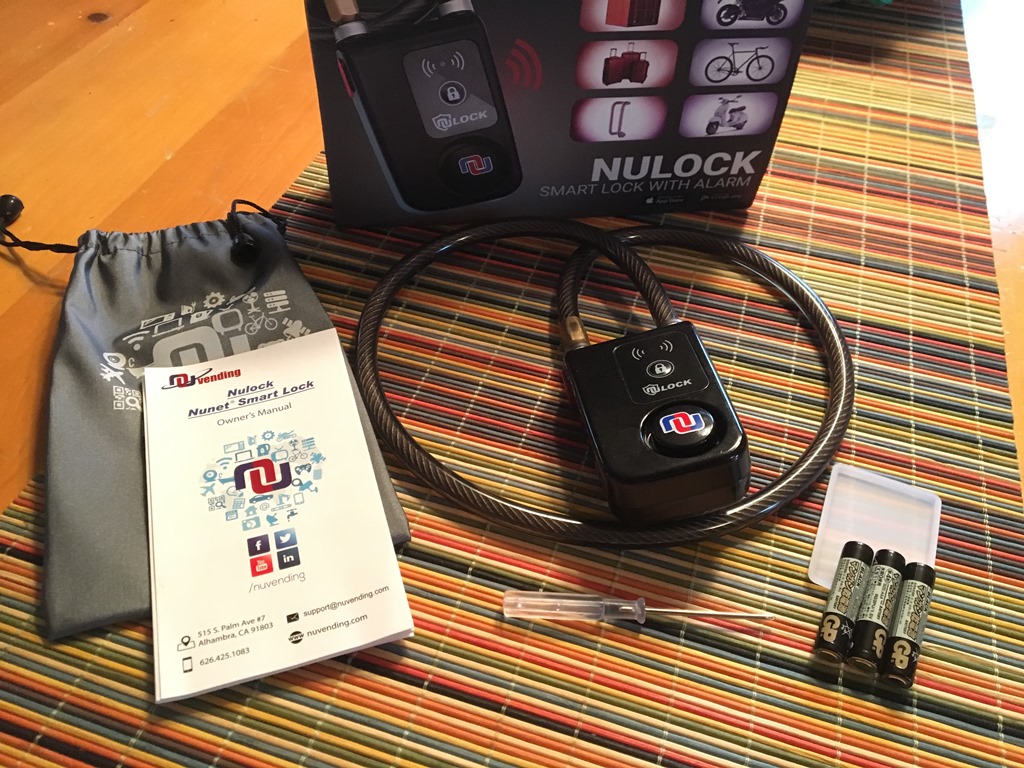 Everything that comes in the box.

The NuLock comes with everything you need except a smartphone. And I do mean everything, because it even comes with a little screwdriver to install the included batteries.

Speaking of batteries, let's address one of the big fears I had about this lock -- running out of battery power when it's locked. Think about it: it's an electronic lock. If there's no power, it can't unlock. The NuLock addresses this by warning you at 20% battery (with lights and an in-app message). At 5%, you won't even be able to lock the lock. So, remember to check your lock battery power before heading out on a trip.

After installing the batteries, you pair it with your smartphone. You'll need the NuLock app, which is free for both iPhone and Android. You have to lock the lock to enable the Bluetooth connection, and then you can pair it. That is pretty simple, but you do have to enter a passcode (which you should change once you're paired up). Once you're paired, you can check out the options (both screens shown below). 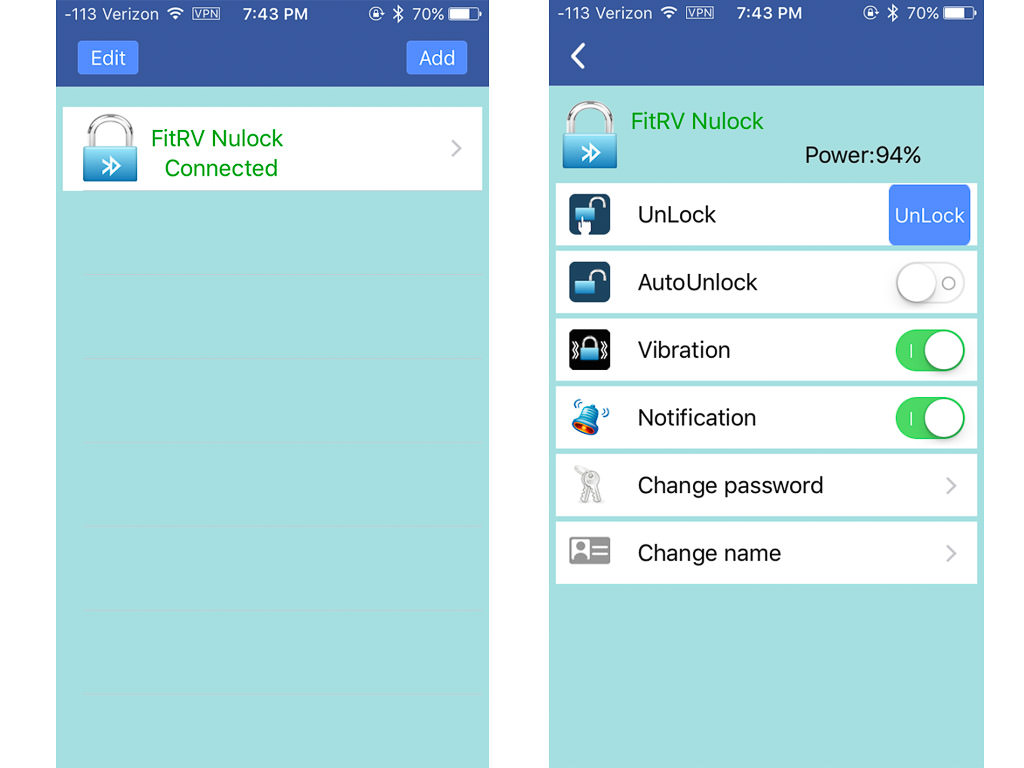 Most of these are pretty self-explanatory, but I'll give a couple of points of clarification. First -- the AutoUnlock option will have the NuLock opening up whenever you approach the lock with your phone. I chose to leave this one off, because one of my frequent uses for the lock would be locking the bike to something while I sat on the patio at a coffee shop or something. In that case, I don't know if I would be far enough away from the lock for it to remain secure. Hitting one button in the app isn't too difficult for me, so I'm fine to leave this off.

You can also turn off the vibration alarm. I suppose if you were locking your bike up on a train or bus, you would want to keep this turned off to avoid nuisance alarms. 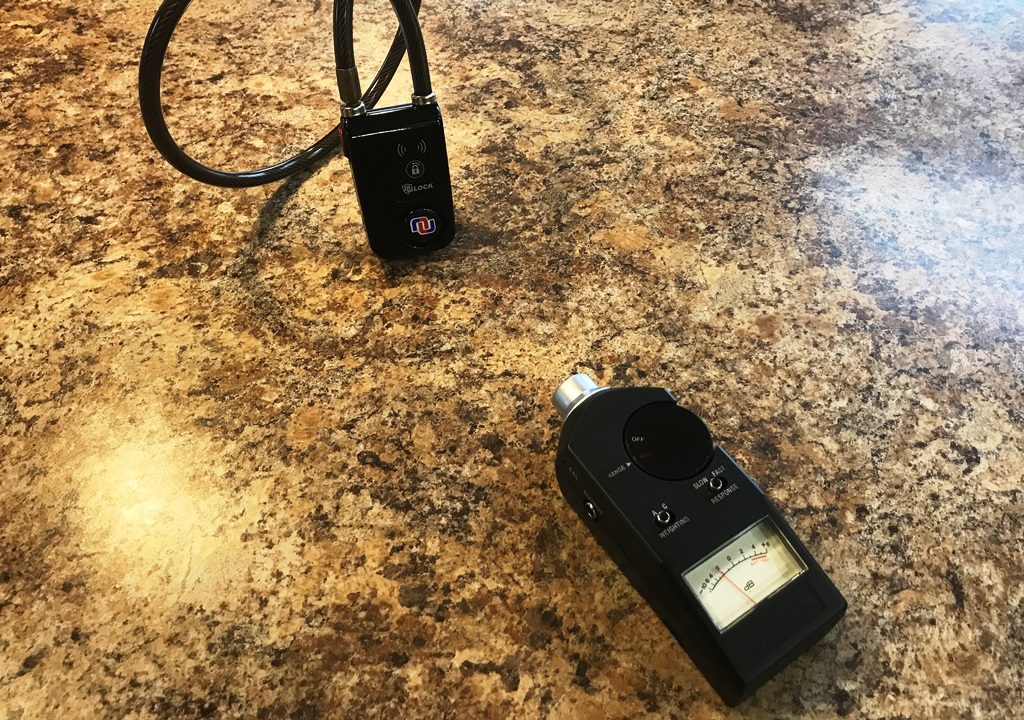 I have tried the alarm out. (Of course I did!) At first, I thought my lock was broken because I couldn't get the alarm to go off. But then I realized that the alarms don't sound if your phone is right there, and mine was in my pocket. Once I put my phone at the other end of the house, the alarms worked just fine. The NuLock claims an alarm level of "up to 110dB". In my rather unscientific test, the alarm produced 118 dB! It should be plenty loud enough to attract attention.

And attracting attention is important, because this is a simple cable lock. It's not the most impenetrable bike lock I've got, but the addition of attention grabbing alarms ups the security factor. The cable is also only about a yard long, so it's really only good for one bike. But the flexible cable makes it easy to take up slack, which is important and will make it more difficult for thieves. 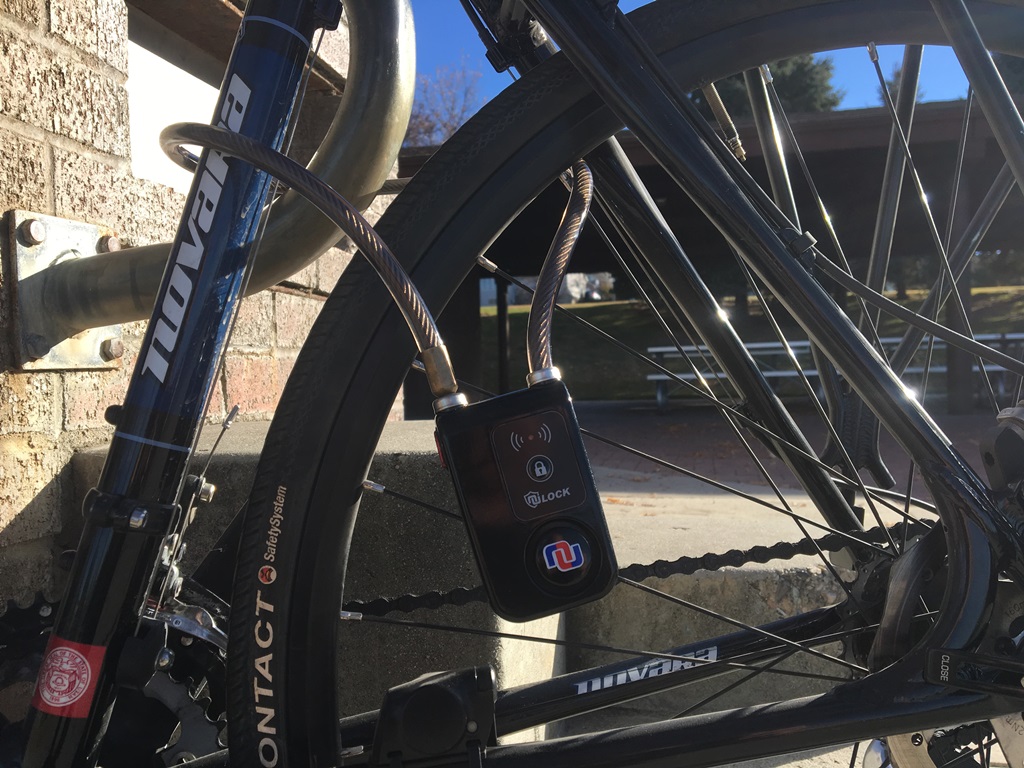 I'm a firm believer in matching the bike lock to the situation. I would not, for example, use the NuLock to leave my racing bike locked up outside my RV while I went hiking for several hours. But where I would use the NuLock would be running to get a few groceries on my bike. Outside a grocery store, outside a coffee shop, at an RV rally -- these are places where the convenience would be appreciated, and the alarm would certainly get noticed.

You can get the NuLock on Amazon.com. If you are (or know of) an RVing cyclist who's into convenient tech, this thing just might be the ticket.