Go Gear: How we tow

The idea of towing a car behind our first Navion alternately sounded like a liberating and terrifying idea at the same time. One of the reasons we chose to buy the Mercedes Sprinter based Navion was that it was a lot less intimidating to drive than a big rig. We also liked it's easy to maneuver size.

It was one of our big rig friends who asked me before we even took delivery of Navion number #1, "So what are you going to tow?" "What? Why would we want to do that?," I asked. Coincidently we were also in the the new car market and, just in case, the idea of towing a car pushed us to get a great little Honda Fit with a manual transmission that would be tow-ready.

After about 10,000 miles of traveling without a tow car, we found that there were a few times we rented a car at a destination -- or wish we had. I was now at least comfortable with driving our rig to the point that the idea of towing something behind us was less intimidating, so out came the Visa card and about $3,000 dollars later off we went dragging our little Fit behind us. And boy did we drag it! When we traded our Fit in it had 11,000 actual miles on it, but over 30,000 towed miles (and no, the odometer miles only show actual driven miles, not towed).

No matter what size motorhome you drive, a tow car is a liberating luxury that, once you get used to the hook-up process, is no big deal to pull along. With a tow car it was an easy drive across 120 miles of Utah dirt road to Kodachrome Basin, or parking the Navion at a shopping mall west of Miami Beach and driving into South Beach for Joe's stone crabs, or driving upstream from the campground for better fly fishing access. We also like to try the local cuisine while we travel and what I noticed is that when we're traveling without a tow car, our dining pattern is more like infrequent lunch stops and dine-in dinners. When we tow, once we've pop the jacks and slideout, we're often off into town to find the dining hot spots offered up on local recommendations, Yelp, Urban Spoon or OpenTable.

If you're contemplating towing let me break it down for you based on our experience.

There are two common approaches to towing a car. One is to use a tow dolly. This is a mini-trailer that you drive your front wheels onto. Tow dollies run $1,500 to $3,000 and are the best solution if you already have a front wheel drive car with a non-towable automatic transmission. The one downside to dollies is that they take up space for storing and can be more of a hassle to deal with if you have to detach the whole assembly -- like when having to back into a campsite space.

The other option is to tow a car with all four wheels down (flat four). You can do this with most manual transmission vehicles and selected automatic transmission models.

We really loved our our little Honda Fit, but with our college years far, far behind us the fluidity of clutching seemed to have become more of a lost art and prompted frequent muttered comments as to the driver's fitness for the task. When we moved to downtown Denver our big SUVs got downsized and the Fit was perfect for urban tasks and easy parking. It was just that lurching around town got a bit tedious which triggered the hunt for a towable automatic..

There aren't a lot of towable automatic transmission cars on the market -- especially smaller ones. Many manufacturers are going to CVT (continuously variable transmission) automatics which can only be towed with two wheels up on a dolly. For the reasons I mentioned before, a dolly wasn't an attractive choice. It also ruled out getting another Fit which now comes with a non-towable CVT transmission.

On the very short list of candidates we looked at Ford which uses a technology called dual clutch transmission (DCT). It's a European design and its name would make you think it's a manual, but it's not. The Ford Focus is one of the models that uses this type of transmission and during my research I made it point to download the owner's manual and read that, yes, it's actually designed to be towed behind a motorhome! 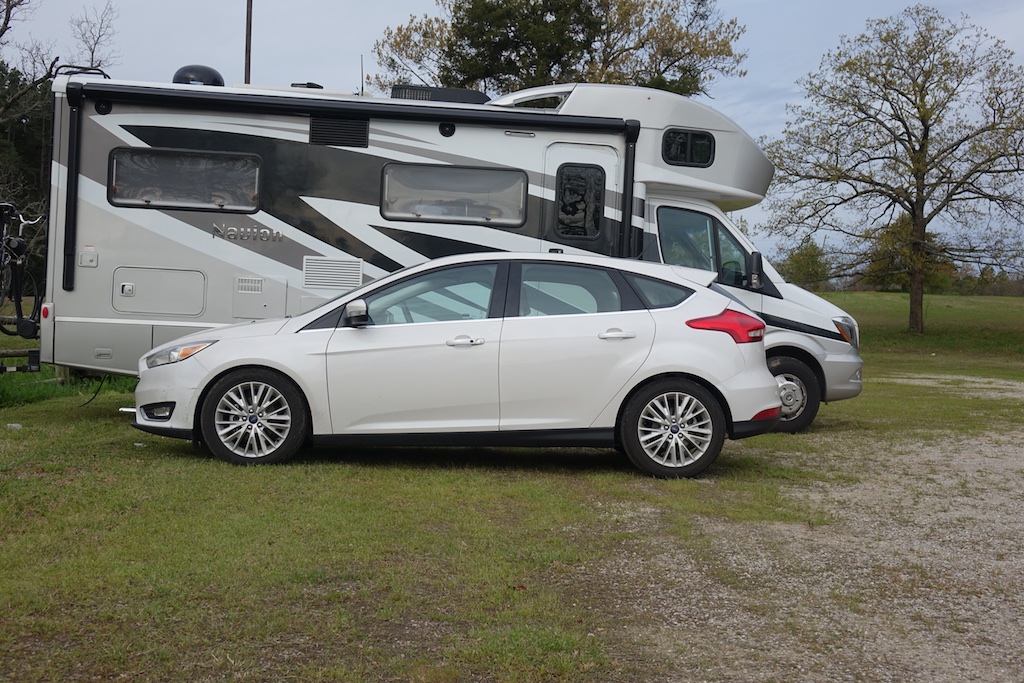 We ultimately decided on a fully loaded Ford Focus hatchback. Compared to the Fit, the Focus has a more refined ride, is much quieter, and no longer required us to use our sketchy shift and clutch skills. Loaded up with a superior voice activated GPS (Ford switched to a new technology in 2016 that finally removes them from the brutal criticism of the past several years), leather heated seats, and a bevy of technologies like blind spot detection, our svelte Focus is an absolute pleasure to drive. 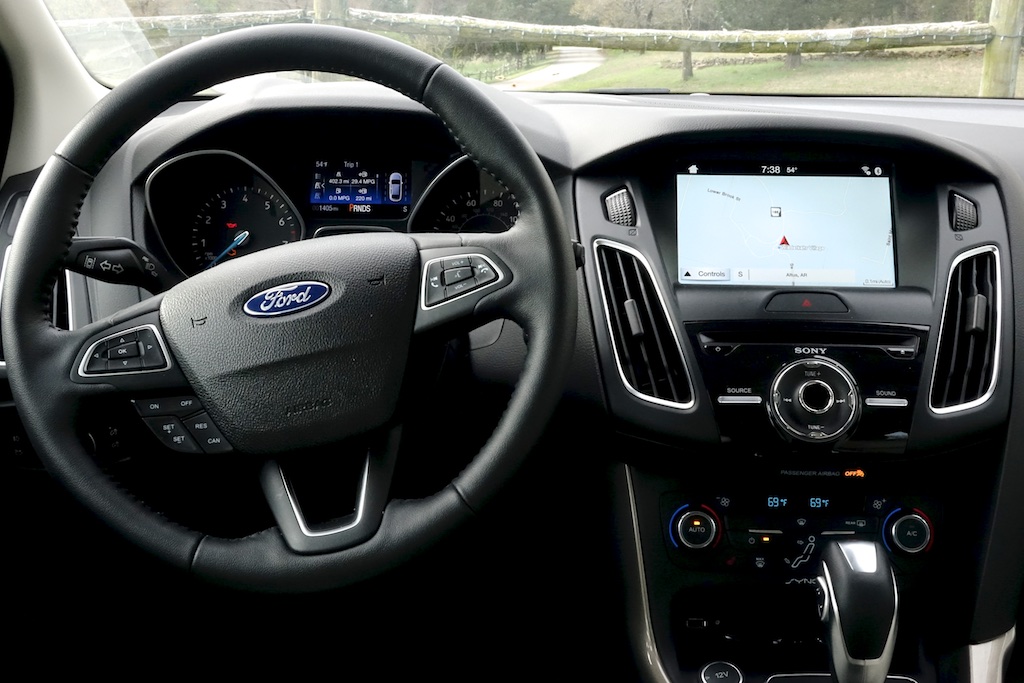 Hey, it's not a Tesla, but the Focus is chock full of useful technology and easy to read displays.

For years we've driven far bigger and more expensive SUVs, and though a lot smaller the Focus has not disappointed us. It is a fantastic city car and very comfortable on the highway. It's German designed heritage shows through and it's no wonder that it's the top selling car in the UK and over 200,000 of the Detroit made models were sold in the US last year.

Tipping the scales at 2,950 pounds (about 500 pounds more than a Fit), the Focus comfortably is well below our 5,000 pound Navion towing capacity. To get the Focus ready I made an appointment with our local purveyor of all-things-towing to get a towplate and electrical connections installed. 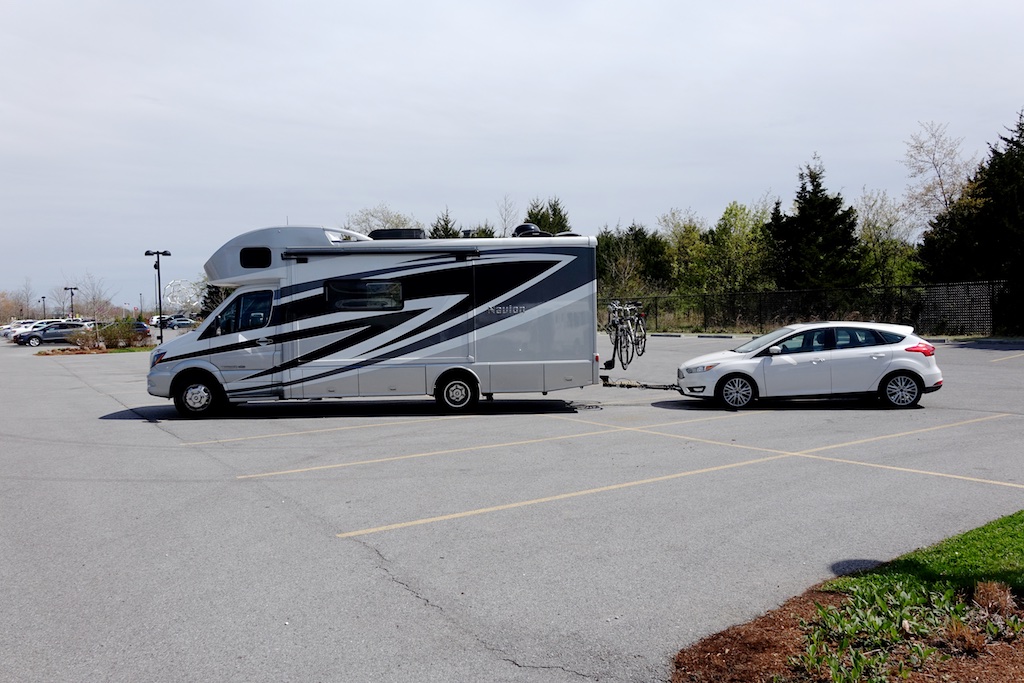 All set up and ready to tow. We use a dual receiver for our hitch that allows us to install a hitch-based bike rack. This solution means we can leave the bikes locked on the rig when we use the car. If you install a tow receiver on your car, you can then easily transfer the bike carrier for even more extended biking options.

We've been using a Blue Ox system which I like a lot. Top on the list of likes is that the connection point to the car does not require a heavy and rather unsightly horizontal crossbar. 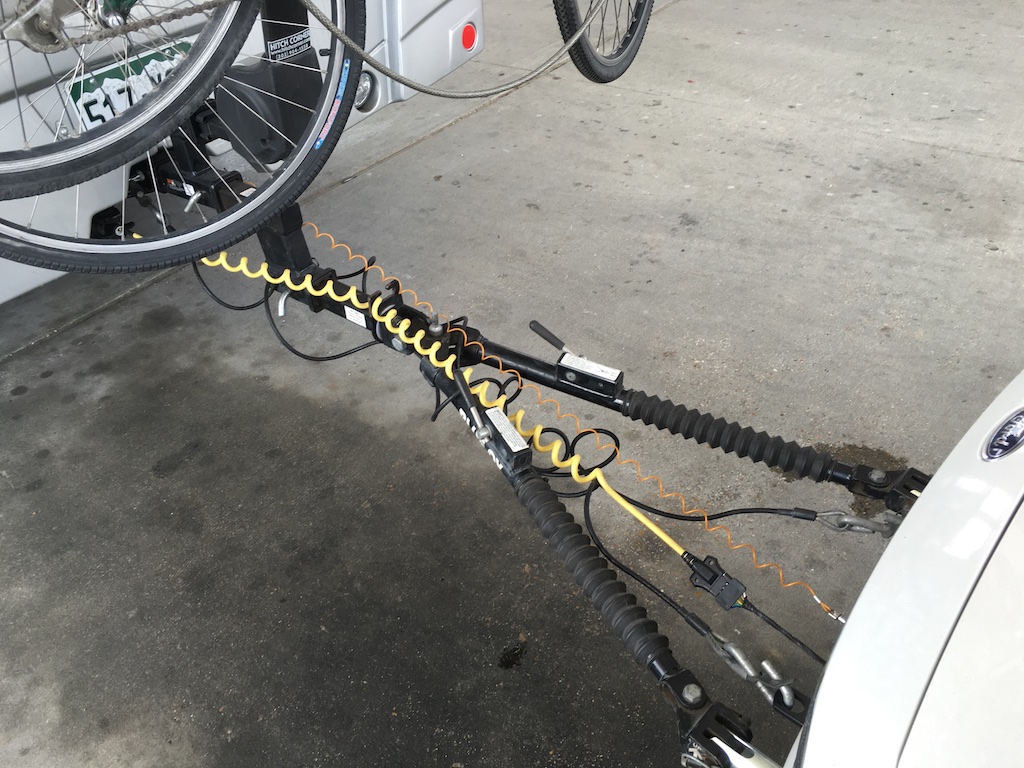 No heavy crossbar! The Blue Ox attaches to two steel posts that positively bayonet and click into place in the nearly hidden tow plate.

Outside of the two emergency backup steel tabs that protrude slightly below the grill, you don't even notice the recessed bayonet connection points. For the same kind of Blue Ox system we have you should expect to pay around $2,000 installed. This includes the adjustable tow bar that attaches to your hitch receiver, the attachment plate that's bolted to your car chassis, and the electrical connections for brake and signal lights.

Looking straight down. The towing bars are attached to the removable posts and locked with retaining pins. Inside the tow bars are the safety cables. In the center the thin wire is the breakaway that, if the car becomes detached, the inside braking system will stop it. The yellow cable with wide connector is the 7-way electrical and light connection.

Attaching the car is pretty easy. We nudge the car about 2 feet behind the tow bar, put the transmission into park and then connect the two adjustable tow arms, power cable, breakaway cable, and two safety cables. When connected we put the car transmission into tow mode and make sure the emergency brake is off. I once dragged the Fit about 100' in an RV park at Moab that had people frantically waving their arms at us - fortunately the only damage was diminished ego. With everything connected it's then time to install the auxiliary brake system.

Almost every state requires an auxiliary braking system for tow cars (though I've never heard of anyone being stopped and checked). For smaller rigs, such as our Navion, having a system that presses on the car's brake while you're decelerating really makes a difference. Without a braking system you can feel a definite push behind you and have to hit the brakes more forcefully.

Braking systems take two approaches. One system is truly invisible as it's mounted under your hood and ties into the hydraulic lines of the brake. One of the big downsides of this type of system is that it requires both an installation when you set up your car and a de-installation when you go to sell it. The more common braking system is one that sits on the floor on the driver's side and has a pneumatic arm that clamps to the break pedal. When the internal accelerometer senses the RV is slowing it triggers the arm to press down on the brake pedal. It's a very high tech way to do a low tech thing.

I chose the RVi brake system. The owner of the company invented the original Brake Buddy that's a competitive product. After his non-compete expired he designed a much more compact, but more capable unit that, among other things, has an available option for TPMS so you can be aware of your tow car's tire inflation. The RVi is easy to use and, when I had a problem early on with the unit while on a trip, their customer service was nothing short of spectacular. They actually found a dealer that had a unit on our way toward Raleigh and we stopped off and simply switched out with a brand new unit. It doesn't get much better than that. 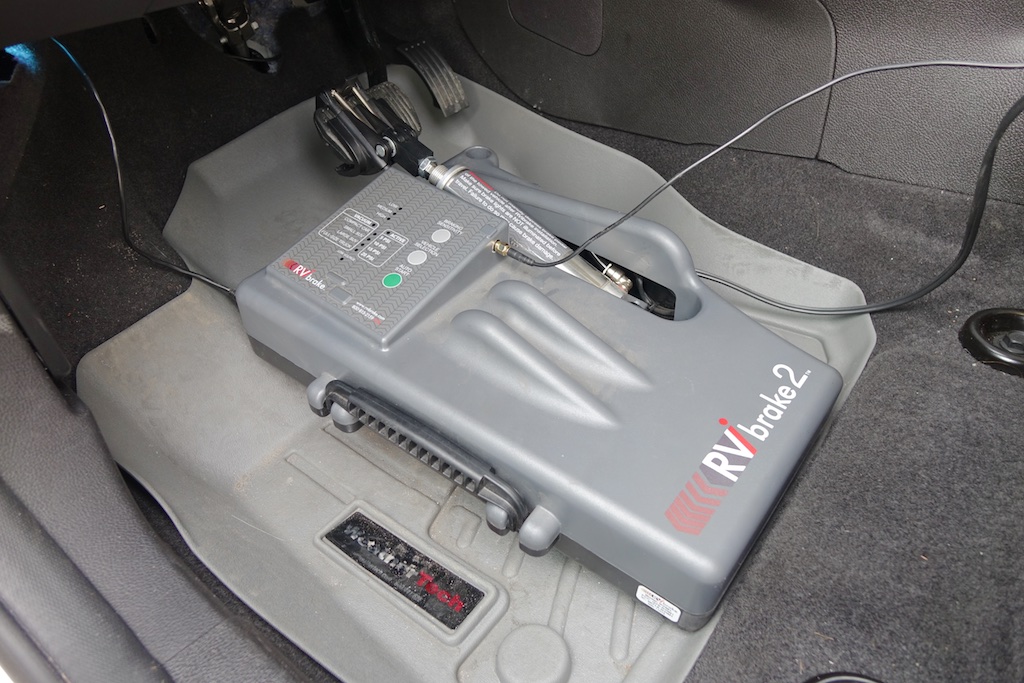 The RVibrake sits on the floor attached to the brake pedal. The thin wire in the center is an antenna that lets you monitor and adjust the brake system and watch tire pressure remotely in the RV.

With the transmission in neutral, the parking brake off, RVi turned on, the final check is to make sure your signal and brake lights work. And it's at this point that I should say something about the wiring to your RV. The cable that controls the tow car's lights also can bring power to your tow car. Why is this important?

When you have an auxiliary braking device operating or simply just having to leave your car in accessory mode (so the front wheels don't lock) it can drain your battery during a day of driving and you'll have to jumpstart your car to get going. I've read many on-line postings about people having their batteries go dead while towing and it's the installer's mistake not to run power from the RV to the car. Now it's happened to me a few times that the power and signal cable connection got loose and the car battery died. After hassling with a couple of jump starts from the Navion battery I bought a rechargeable jump start battery from Amazon for about $70 dollars which is a pretty nifty accessory to have.

The final question I'm most commonly asked is what does towing do to our gas mileage? With the Honda Fit it decreased efficiency by 1 MPG. With the 500 pound heavier Ford Focus the mileage penalty seemed to be the same over a 5,000 mile trek to Florida.

In RV lingo a tow car is often referred to as a "TOAD." I like to think of it in more romantic Star Trek terms as the shuttle craft for the away team. But now, I'm beginning to think the acronym of "SCAT" isn't much of an upgrade, nor is drag queen. I'll leave it to you to find your own optimal name. But, however you describe it, towing a car behind your rig is pretty easy and it definitely opens up your options of exploration.