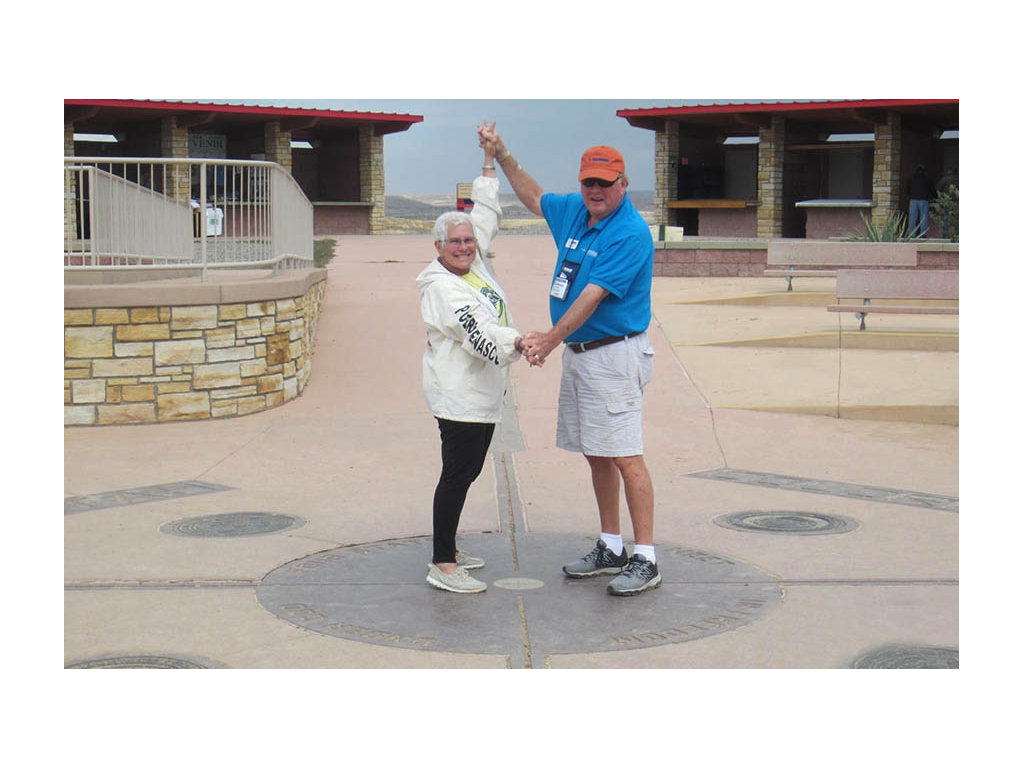 As part of our ongoing WIT member series, we asked GoLife contributor, author, and full-time van lifer Sue Ann Jaffarian to interview long-time members of the Winnebago family, the Bienvenus. We hope you are as delighted as Sue Ann was to meet this couple!

In English, the French word bienvenu means welcome. Andy and Jeanie Bienvenu go over and beyond to embrace their last name’s meaning. If you have ever been to Winnebago’s Grand National Rally and visited the WIT Louisiana Club during the row parties, you know what I mean. Or maybe you have experienced their hospitality at one of the Louisiana Club’s rallies.

Andy and Jeanie are both Cajun and Andy is the official chef for the Louisiana Club Rallies, dishing up Cajun deliciousness (such as jambalaya) for their events. He learned to cook from his mother and grandmother, as well as from an old camping friend who did much of the cooking for the Louisiana group before Andy started. She groomed Andy to take over for her. Andy has been cooking for their state rallies since 1983, with the exception of 2012 when he and Jeanie were out west working as Winnebago representatives. 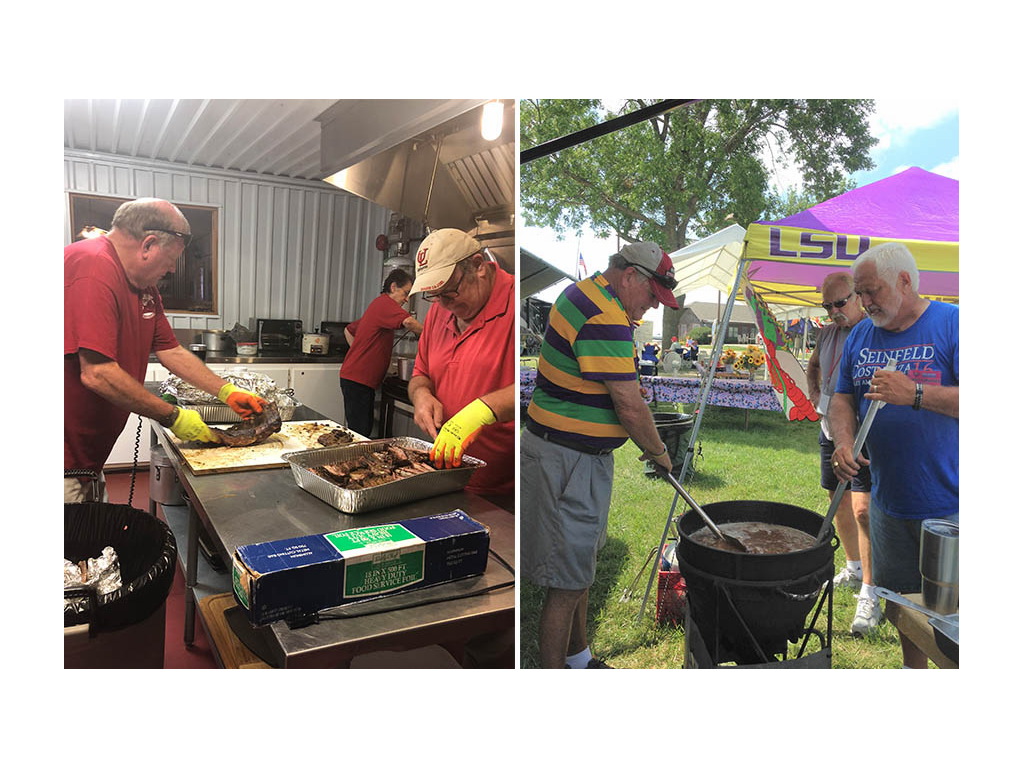 Andy carving ribs with his younger brother, and stirring the pot with a friend at GNR.

When I attended GNR in 2019, people kept telling me I HAD to visit the Louisiana tent. It was raining the night of the row parties, and the Louisiana row was quite a distance from the Winnie B row where I was staying. Even so, that didn’t deter a friend and me from borrowing a golf cart and heading their way for the good stuff. And guess what? The food the Louisiana Club was dishing up lived up to its hype!

40+ Years as Active Members of the Winnebago Family

Besides being great hosts and cooks, Andy and Jeanie Bienvenu have been part of the Winnebago family and WIT members for nearly forty years, starting when they were young adults. They joined WIT Club in 1981, when Itasca owners had WIT membership numbers that started with I and Winnebago owners had membership numbers starting with W. The designations were discontinued in 1983, but the Bienvenus’ membership card (I2630) still boasts the early I indicator. They are rather proud of that since there are only about ten active I memberships left. 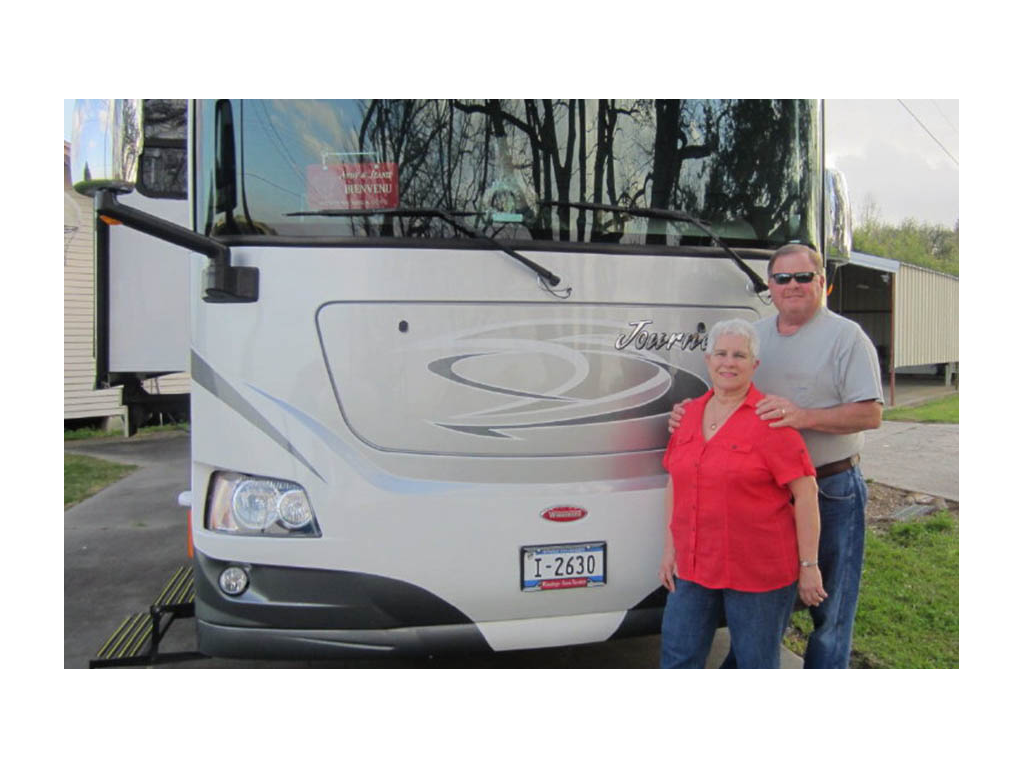 The Bienvenus became Winnebago area representatives in 2011 after they retired, covering the large area west of the Mississippi River and Canada. They worked eight months out of the year as representatives.

Their involvement with Winnebago has also included taking part in organizing GNR and working with Outdoor Adventures, leading and tail ending some of the WIT tours. They covered a lot of miles during that time and hosted different rallies and caravans. 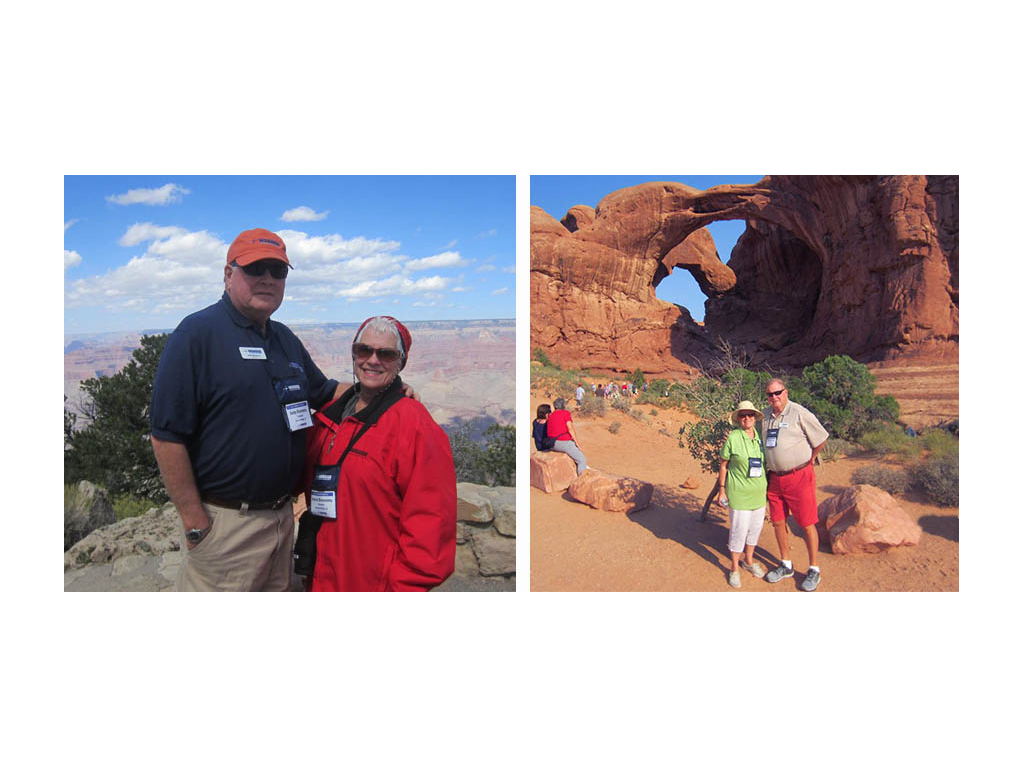 In addition, they are second-generation WIT members and joined because of Andy’s parents. Even before becoming a WIT member, Andy would go to the outings and cook for them. Now Andy’s brother Luke and his wife, Juanita, are WIT members and belong to the same Louisiana groups that Andy and Jeanie belong to, such as the Bago Cajuns, N’Awlins Winnies, and the Pelican Winnies. In 2019, they introduced them to GNR. The Bienvenus not only have Cajun in their blood, but the Winnebago spirit runs through their family. 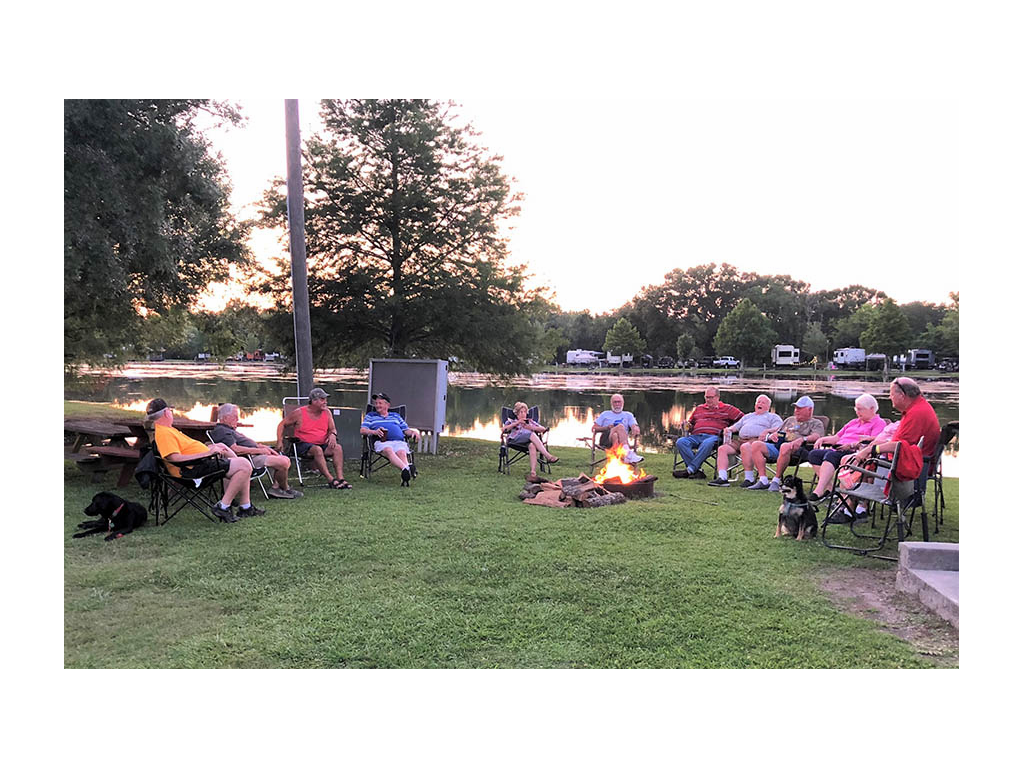 Andy and Jeanie currently travel in a Sunstar 27N Class A gas-operated RV with plenty of storage for Andy’s jambalaya cooking pots. A very important feature, they assured me. Over the years, they have had ten different rigs — five of their own and five assigned to them as representatives. Their first RV was an Itasca 25-foot Class C. They also owned two Braves and a Chieftan before becoming representatives. Their favorite rig was a 2004 36-foot Brave side-aisle model. 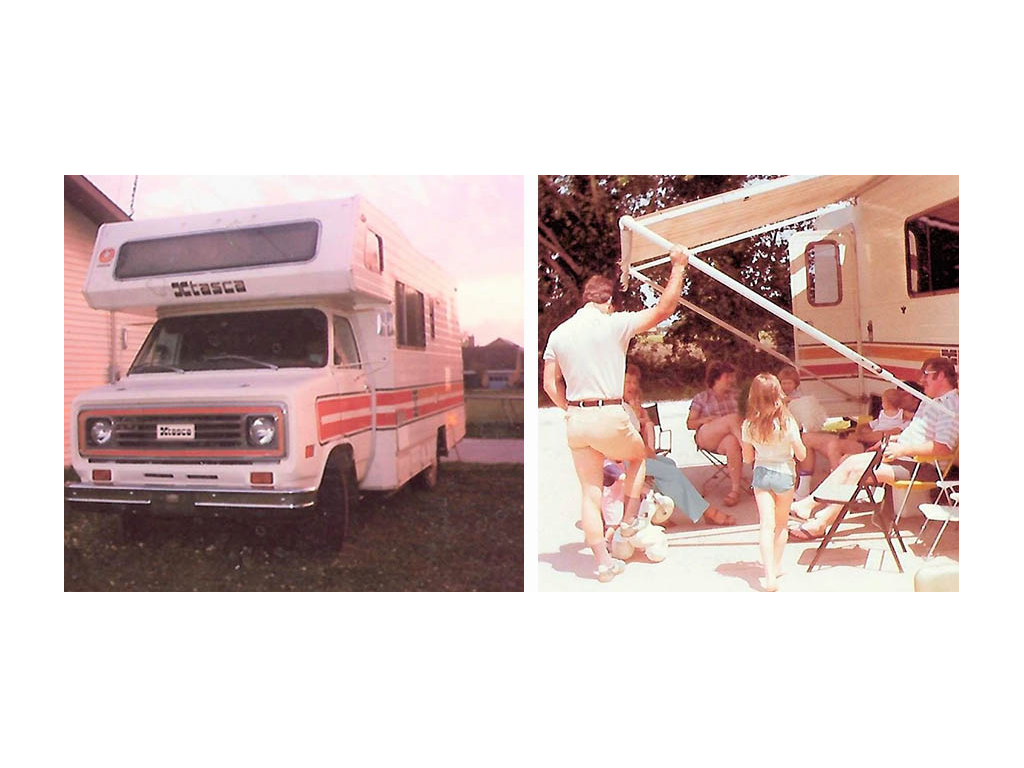 Both Andy and Jeanie were raised tent camping. They both grew up in Louisiana and still live on the same property he grew up on. Jeanie grew up about ten miles from where they live. Their youngest was not quite two when they bought their first motorhome in 1981. They have three daughters, eight granddaughters, and one great-grandson. They took their grandchildren camping when they were younger, but in shifts. The granddaughters all loved their camping trips with Mimi and Pawpaw. 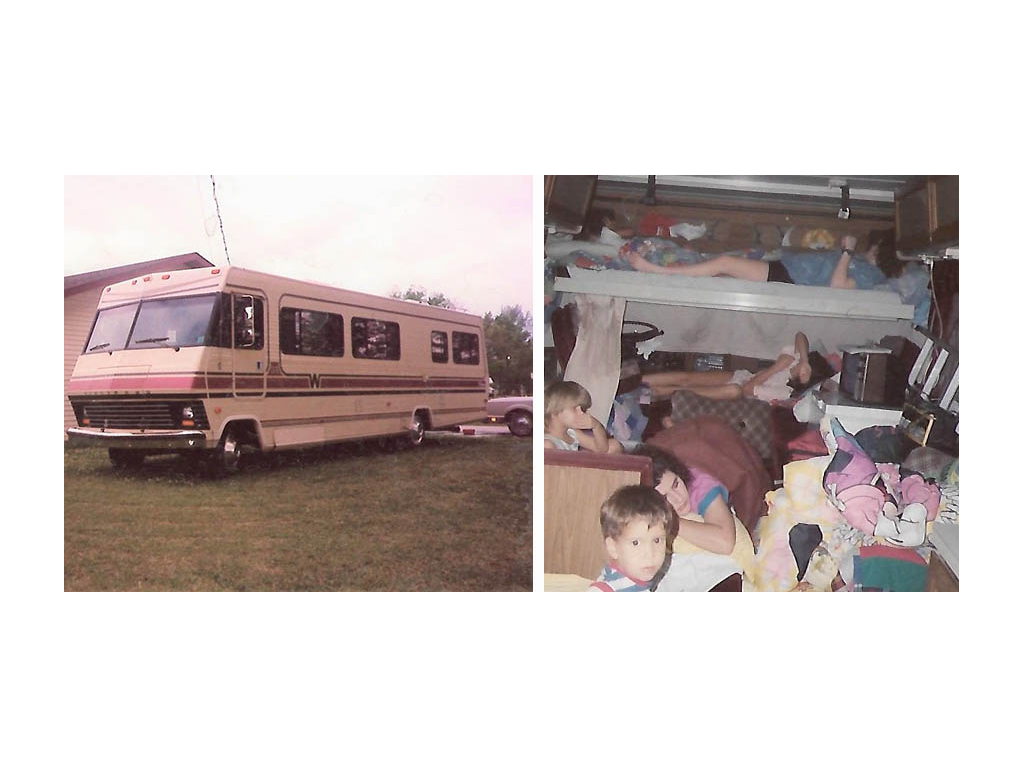 Until 1997, they belonged to the Red Stick Winnies, which are no longer active. During that time, they never missed a meeting, which were held the second weekend of the month. That was their family time, and everyone enjoyed it. There were always activities for the children, with a total of nine children in the club. Jeanie spoke with great fondness about how the families in the Red Stick Winnies would blend together during these meetings, with the children playing and moving easily between one family and another like one big extended family. It was a great way for their children to grow up.

During this past year, they did a couple of short local trips. One was to Grand Isle, LA, their favorite family vacation spot. It was still a slow travel year for them, as with most folks. They plan on getting out a lot more this year. 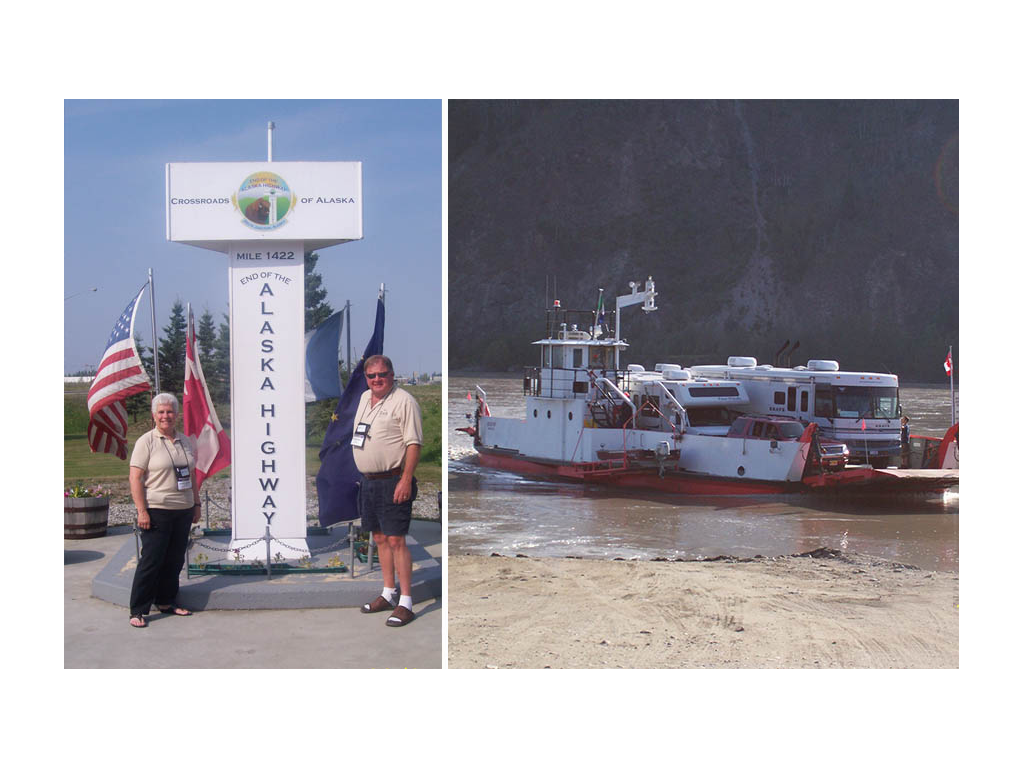 Bienvenus on Alaskan Caravan in 2019.

The Bienvenus are very proud of the Louisiana WIT Club. It began in 1972-1973 and currently has two chapters. It is one of WIT’s smallest clubs, but one of the most active. They host their own rally every other year and pull out all the stops for it, featuring food, entertainment, pre-rally tours, and much more. In the past, they have visited an accordion factory, a crawfish rice farm, and taken swamp tours. Usually, there are over 100 rigs present. At the 1987 rally, they boasted 235 units. 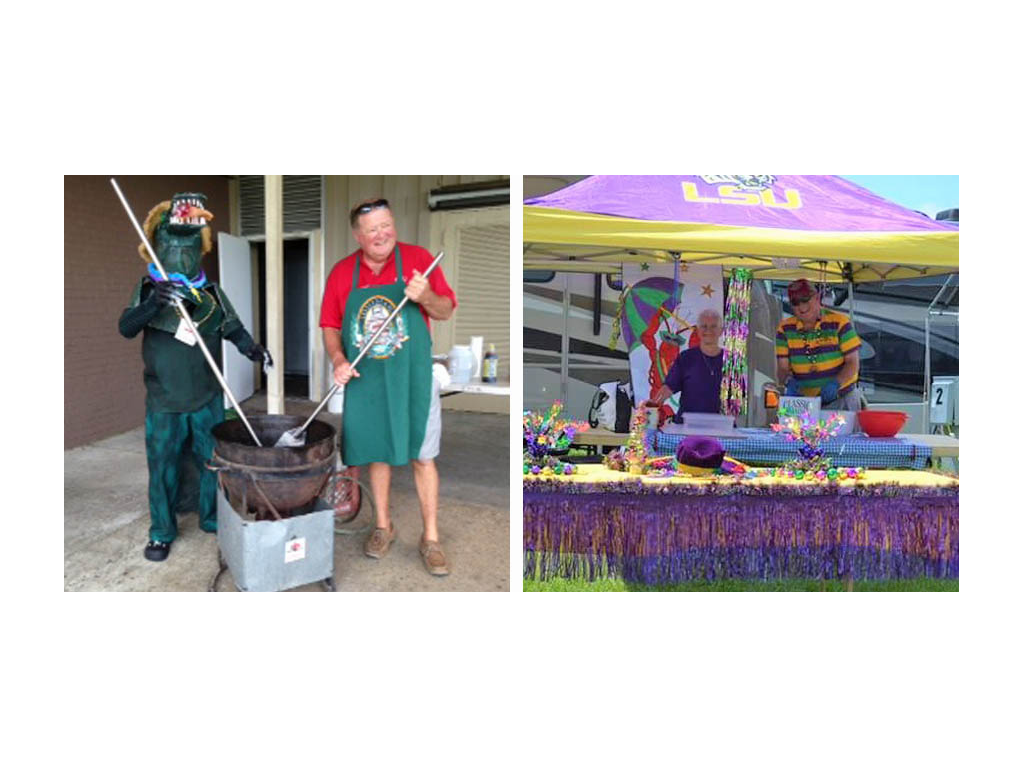 The Louisiana Club rally is open to all WIT members. At the last rally, attendees represented seventeen states and Canada. The next Louisiana Club rally will be held October 20-23, 2022. The cost is approximately $175 (fees and plans have not been finalized) for the event, which includes four days, three nights, and three home-cooked Cajun dinners and two breakfasts. The cost for the pre-rally is $20 a night. It’s already on my calendar.

When asked what their favorite thing has been in their association with WIT, they both quickly responded it had been working on GNR, and they will be assisting with the 2021 GNR this July. They have been to over twenty GNRs, and Andy remembers that at their first in 1992 it was all dry camping, no electric hookups like now. 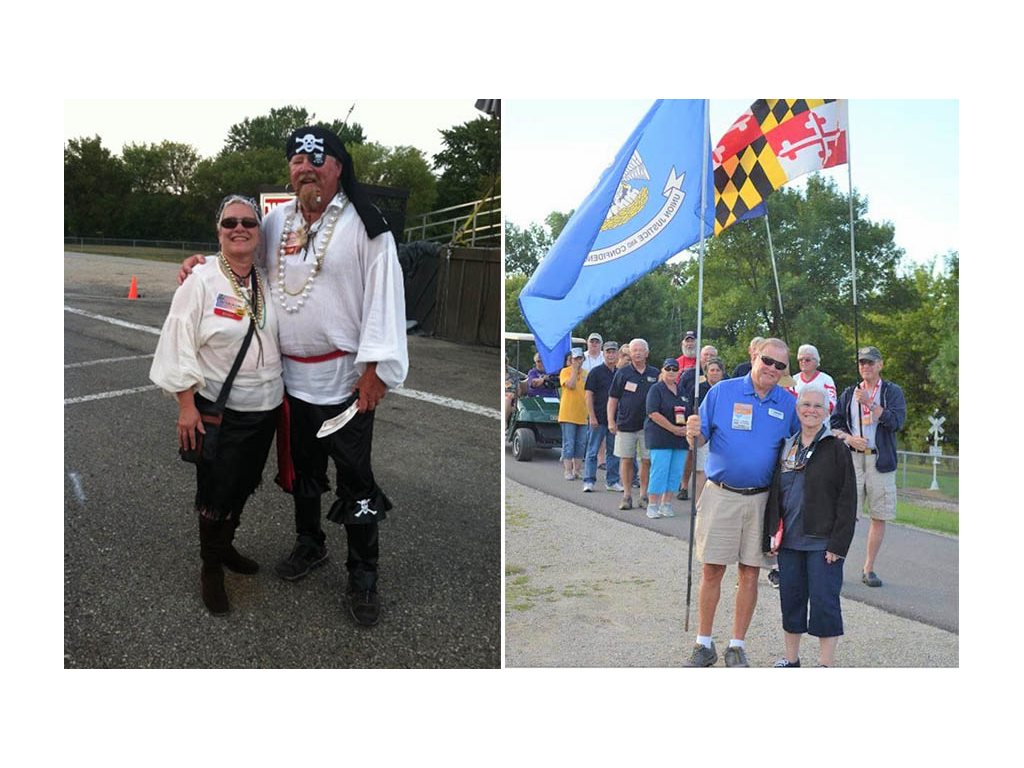 Bienvenus enjoying GNR: Dressing up for Treasure Island theme in 2012, and carrying the Louisiana State Flag in the parade of states.

Their favorite part of GNR are the row parties. ‘Hot Sex’ is the favorite row party drink for the Louisiana Club. Cajun cooking and Hot Sex. I’m telling you, don’t miss a trip to the Louisiana row during the next GNR!

At the end of my interview with Andy and Jeanie, I asked them what they wanted to share with readers about being members of WIT and how to get more involved. They were both quite enthusiastic in their responses.

Andy noted that there are many things you have to learn about your motorhome, and WIT gives you a support system to learn from others’ experiences. Through other WIT members, you learn a lot of little tricks about your RV and make lifetime friends doing it.

Jeanie added that being a WIT member is also a benefit for families, providing children with the opportunity to associate with people of all ages from all over the country and Canada. She also stressed how you meet long-time friends and enjoy a big extended family. One of the Bienvenus’ biggest pleasures is visiting WIT friends all over the country and having WIT friends visit them. 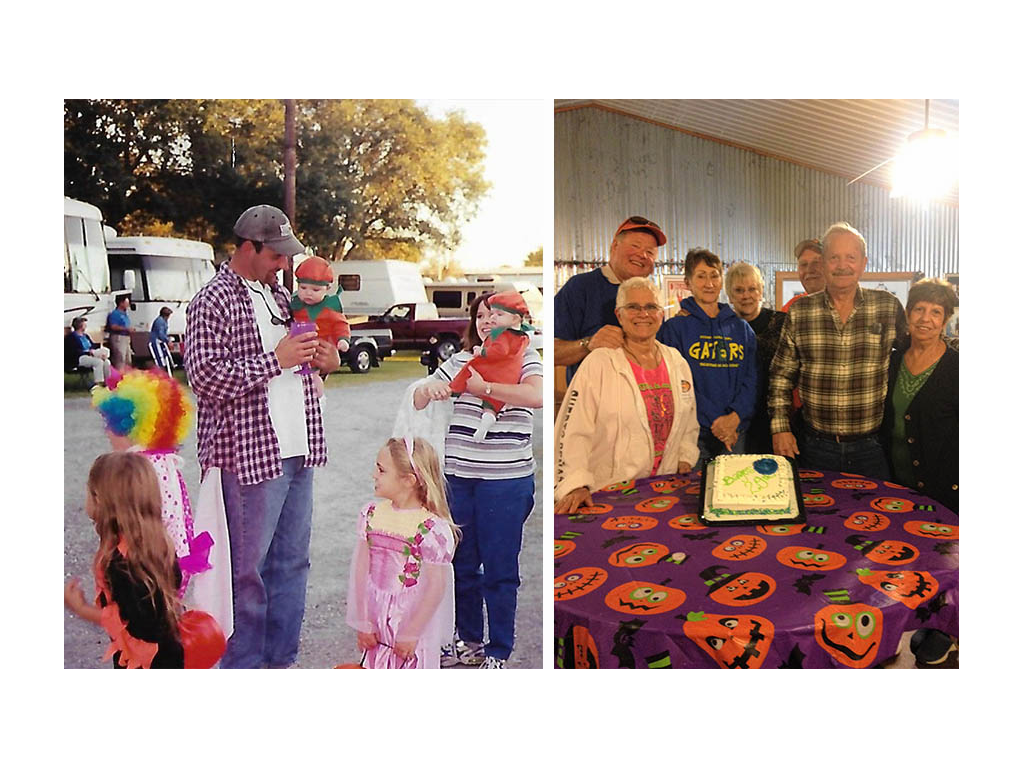 October memories with the Bago Cajuns: Trick-or-Treating with the grandkids in 2001, and celebrating 20 years in 2017.

Andy and Jeanie suggested that as people travel, they should check the WIT rally listings online and check where groups are meeting. You can contact the different clubs and chapters and see if they have room to include you. They really encourage WIT members to get in touch with groups in other states and get to know them. Also, join Facebook groups of these other clubs. By doing that, you can learn about other camping opportunities and attractions.

WIT members are friendly and helpful people, and like Andy and Jeanie Bienvenu, they are very welcoming. This has also been my experience in the few years I have been a member of WIT. 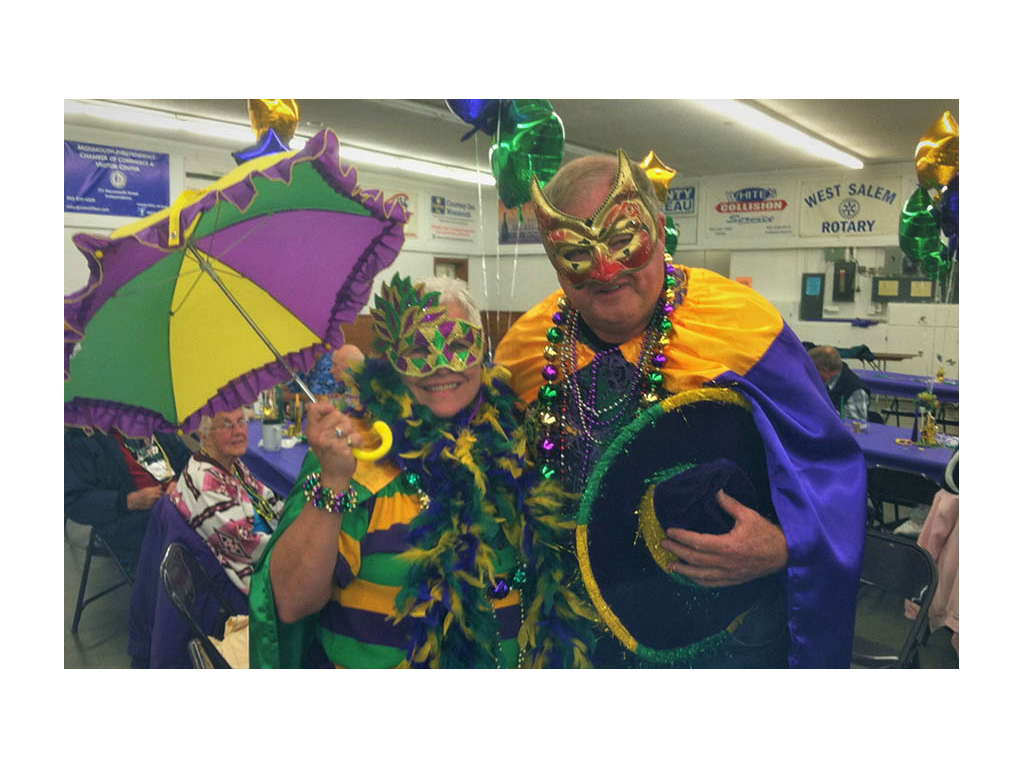 So, if you are at GNR, don’t forget to visit the Louisiana row and say hello to Andy and Jeanie. And to me. I’ll be the one holding an empty bowl and doing an impersonation of Oliver Twist: “Please, sir, I want some more.”